Last weekend I made my (almost) monthly trip to Chelsea with a long list of shows to see. I started off with two sound-related exhibitions: 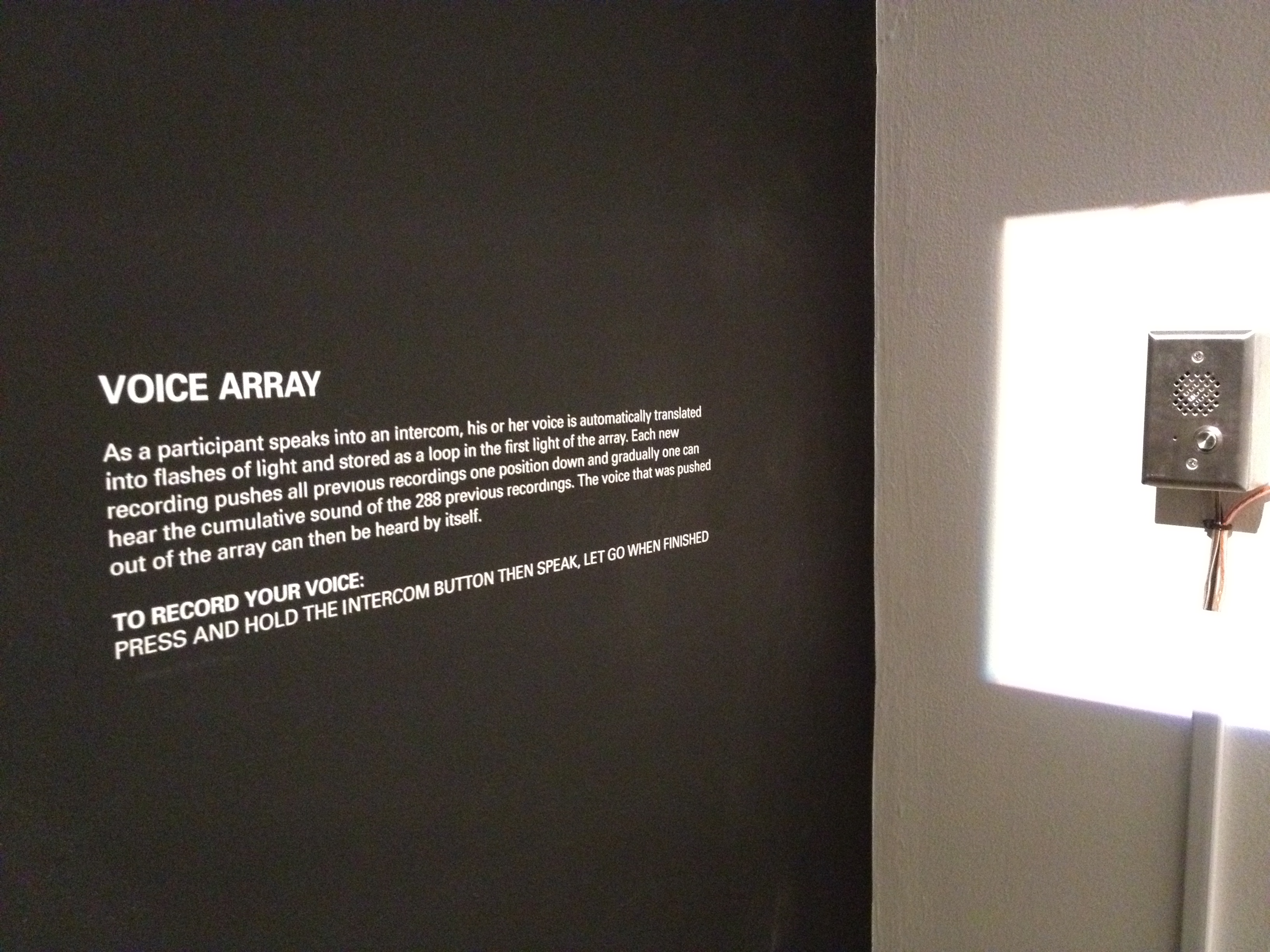 Rafael Lozano-Hemmer’s Voice Array and Last Breath were at bitforms (where, I just discovered, one of my fantastic students works). From the press release:

Voice Array is a construction for vocal improvisation that uses blinking LEDs and a customized intercom system of audio playback and recording. Capturing hundreds of voices and translating each one into a series of light flashes, the piece stores a unique pattern as a loop in the first light of the array, until the next participant speaks into the intercom. Each new recording is pushed along its long horizontal band of LEDs, as sounds of the voices gradually accumulate. When the first voice reaches the other side of the piece, the participant’s phrase is once again released as sound, punctuated by the staggering pulsation of all the lights in tandem. The ever-changing voices stored by the piece play back through a directional speaker, during moments of less activity.

Last Breath is a robotic installation that stores and circulates the breath of a person forever, between a bellows and a brown paper bag. The apparatus is automatically activated 10,000 times per day, the typical respiratory frequency for an adult at rest. With each breath the piece generates quiet sounds from the bellows, the motor and the crackling of the paper bag. The piece also sighs 158 times a day. For the exhibition in New York, the piece is a biometric portrait of Cuban singer Omara Portuondo. 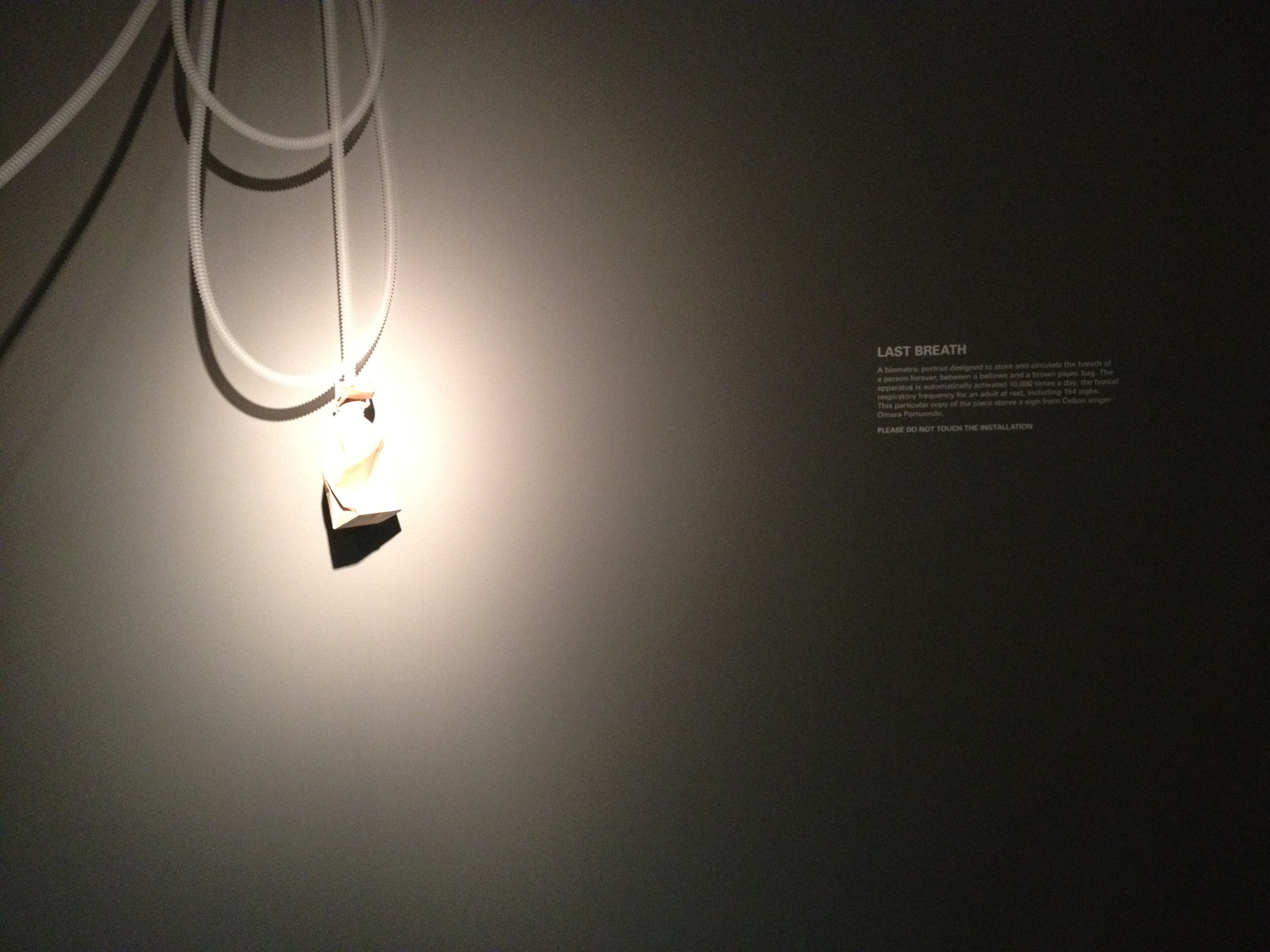 Then I was off to Susan Philipsz’s The Distant Sound at Tanya Bonakdar. From the press release:

The exhibition takes its title from the 1910 opera, Der ferne Klang, or The Distant Sound, by the Austrian composer Franz Schreker. In Schreker’s work, a composer is haunted by an ethereal noise that he tries all his life to capture. It is only on his deathbed that he realizes the sound has been around him all the time, in the rhythmic textures of modern life. In Philipsz’s installation, bits of the score for the horns, strings, and chimes from Schreker’s opera are disassembled and transcribed so that each note comes from its own speaker. Abstracting the individual notes from the composition as a whole transforms the music into sound and creates an open-endedness that allows the ambient noises of the space to intermingle with the work… A set of photographs that document the journey from Glasgow to Dundee, taken while Philipsz was still in college, create a stark visual landscape along the back wall of the main space. The atmospheric diptych, capturing cables in transit, speaks of the dynamic of movement and separation.

Oddly, I can’t remember a thing about this work — but ArtFagCity has a good write-up, which might help to explain why the show didn’t gel for me or plant itself in my memory. 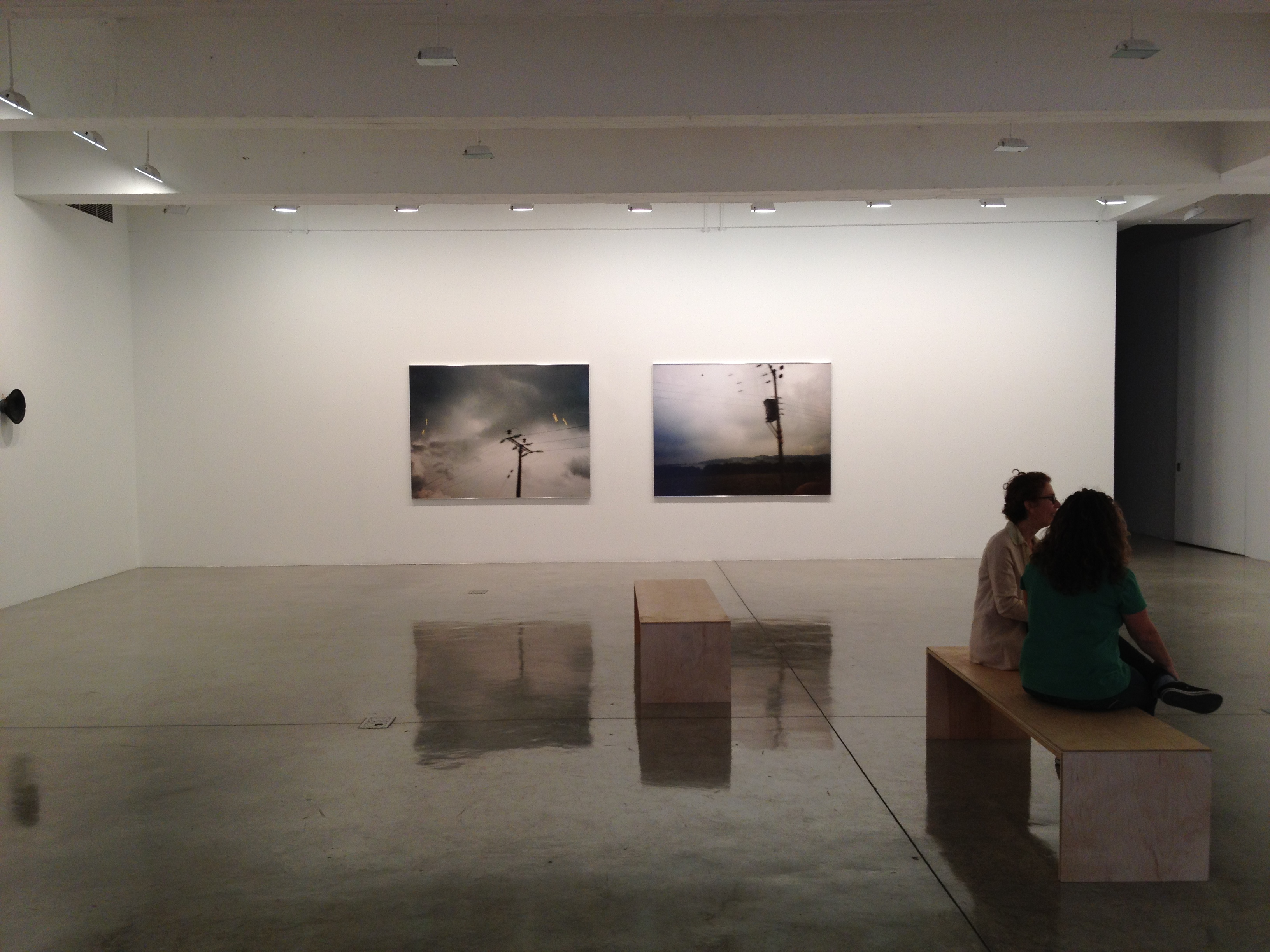 Perhaps in keeping with the layering theme, but translating it into the visual realm, I saw Michelle Stuart’s lovely Palimpsests at Leslie Tonkonow. From the press release:

The forensic-archeological term palimpsest, defined as “something reused or altered but still bearing visible traces of its earlier form” can be seen as the operative metaphor for Michelle Stuart’s entire body of work, from the pioneering Land Art pieces of the late 1960s and 1970s to the paintings, drawings, sculpture and mixed-media objects that have followed to date.

And in regard to her subject matter:

Since the 1960s, Michelle Stuart’s ardent curiosity about the natural world, fascination with the cosmos, and lifelong commitment to social justice have emerged in works of art that transcend geographical, philosophical, and aesthetic boundaries. 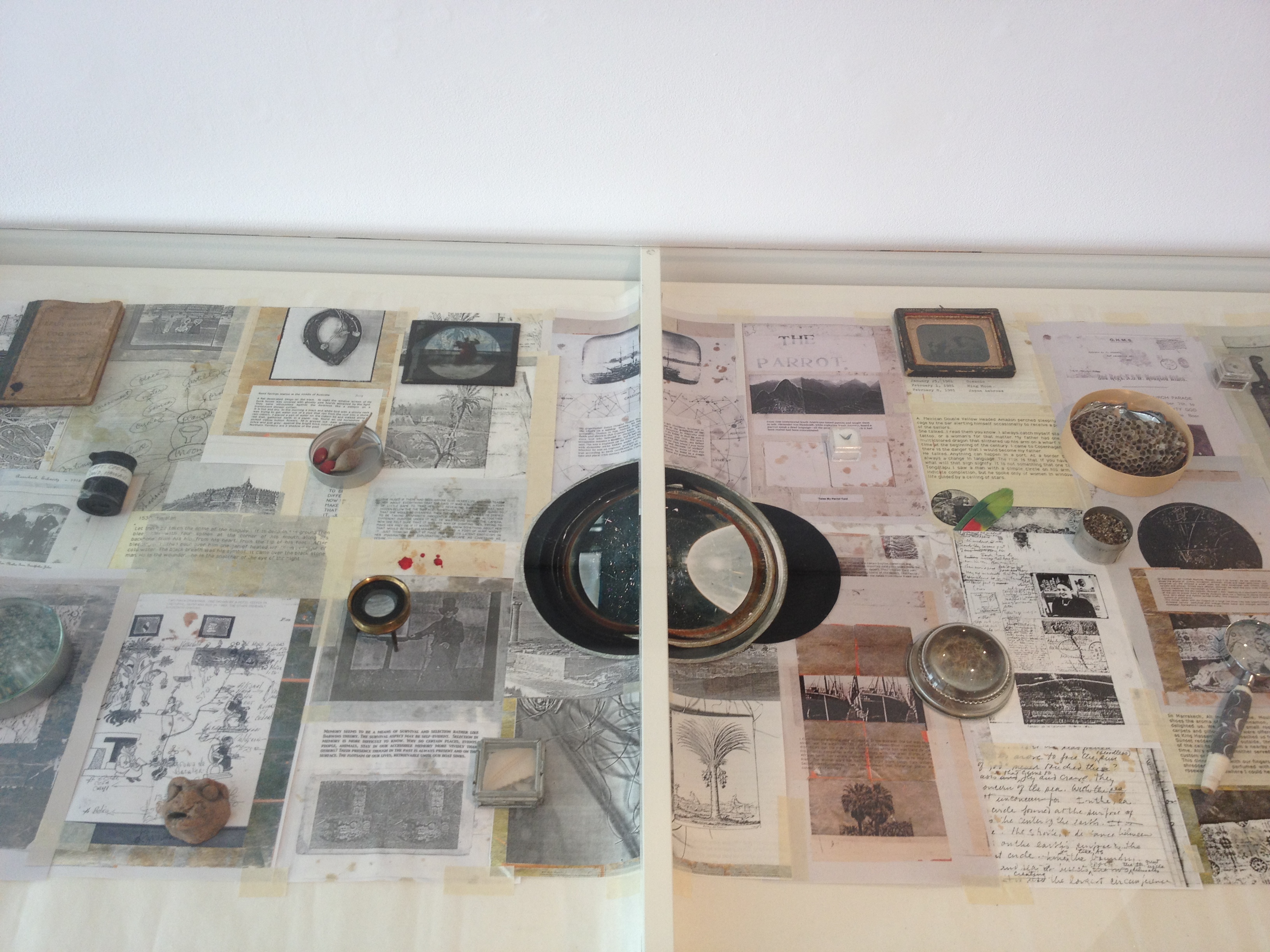 And continuing with the visual palimpsests, I then saw Barry Le Va‘s The Italian Project: Monica in Grey at Sonnabend (which, for some reason, always seems to have a Bernd + Hilla Becher show going on!). Le Va’s 49 collages feature images of Monica Vitti (from Antonioni’s films) and lots of graphical references to optics.

Le Va’s work had an archival quality that continued through in Dennis Adams‘s Malraux’s Shoes and Tagging the Archive at Kent Fine Art. I’ll quote at length from the press release, given the relevance of this piece to next week’s discussion — on the “archival impulse” — in my Archives Libraries Databases class:

In his new video work, Malraux’s Shoes, Dennis Adams masquerades as André Malraux (1901–1976), the French writer, adventurer, Resistance fighter, cultural provocateur, art theorist, orator, statesman, and passionate archivist of the world history of art. Malraux’s arrest at age twenty-one by French colonial authorities in Cambodia for stealing bas-reliefs from a Khmer temple is an early testament to what would become his obsessive sampling of visual art from diverse cultures. For Malraux, this sampling was a means of laying claim to the very possibility of art’s transcendent value. Over the last forty years of his life, Malraux would assemble, disassemble, and reassemble montages of photographic reproductions to create Le Musée imaginaire, which ranks as one the twentieth century’s seminal manifestations of the archive along with Aby Warburg’s Mnemosyne Atlas, Hanne Darboven’s Cultural History 1980–1983, and Gerhard Richter’s ongoing Atlas project. Malraux’s idea of an imaginary museum, a “museum without walls” (which he first announced in 1947), is a prescient manifesto of the digital age that enacts the displacement of the physical art object and the museum by photographic reproduction. And Malraux’s privileging of curatorial over artistic production is a first instance of explicitly locating the creative act in the process of assembling, grouping, and displaying works of work.

The set for Malraux’s Shoes is a reconstruction of the iconic photograph of Malraux standing in his study with the plates of his book The Imaginary Museum of World Sculpture laid out on the floor before him. The entire video is shot on this single set. With the camera positioned overhead, the plates on the floor become the backdrop for every shot; no walls are ever visible. As the camera moves between fixed shot and slow pans, details of the images on the floor create a visual landscape that runs through the work.

Finally, I loved that my afternoon ended with the contrast between the restraint of Richard Tuttle‘s Systems, VIII – XII at Pace, and the abandon of Thomas Hirschhorn’s Concordia, Concordia at Gladstone. 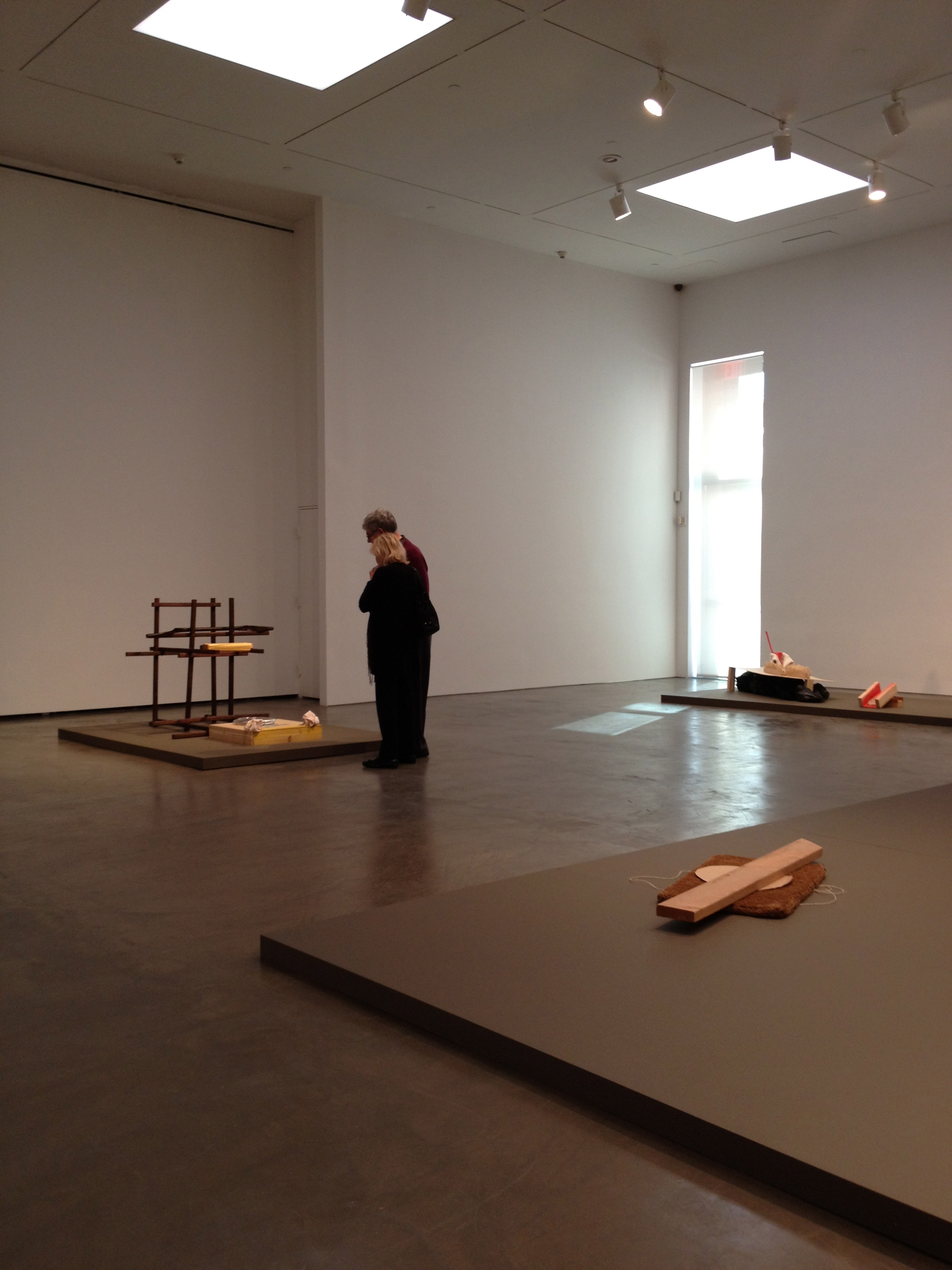 Hirschhorn’s work was “inspired by the sinking of the cruise ship Costa Concordia, which ran aground off the coast of Italy in January 2012.” I love his explanation of how this event was emblematic of so many contemporary conflicts:

I was struck by this apocalyptic upside down vision of the banal and cheap “nice, fake, and cozy” interior of the overturned ship. This pictures the uncertainty and precariousness of the past, of the present moment, and of the future. I saw it as an amusing and disturbing but nevertheless logical and convincing form. This must be the form of our contemporary disaster… I want to do a Big work to show that the saying “Too Big to Fail” no longer makes any sense. On the contrary, when something is Too Big, it must Fail – this is what I want to give Form to. I want to understand this as a logic and this is the Form! 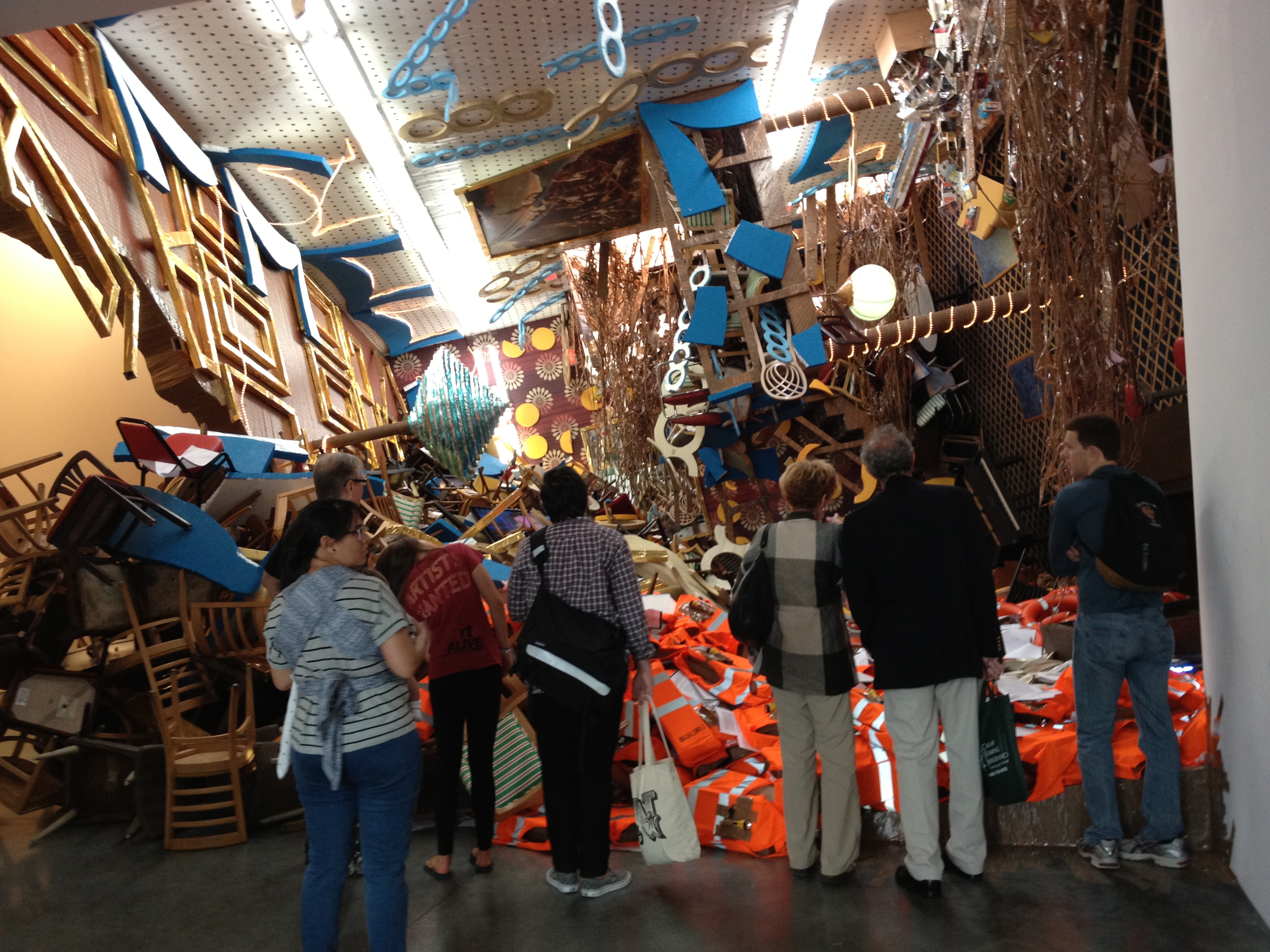 Last summer, in a post about all my seasonal listening — which included an awful lot of podcasts — I commented on a weird sonic trend I had discerned among well educated, culturally savvy young ladies on the radio. Here’s what I wrote:

[This American Life’s] rebroadcast earlier this summer of their episode on Infidelity was, in a way, a sonic revelation for me. Click on the link and listen to the Prologue [0:54 -> 3:42]. I listened to this section at least ten times — not because I was particularly taken by the story, but because I was taken with the [female] guest’s voice. By “taken with” I mean: positively nettled. Over the past couple years I’ve noticed a mini-trend among well-educated, seemingly self-confident young women on the radio: their voices emerge initially from the front of their mouths, then, over the course of a sentence, move back into their throats. Their sentences trail off into whispery, raspy monotones — kind of East-Coast-Ivy-League-Valley-Girl-All-Grown-Up-And-Working-At-The-New-Yorker. It sounds knowing and lazy and jaded all at the same time. I heard it again near the end of the inaugural n+1 podcast — and again, in a differently “timbred” variation, in [a] Triple Canopy podcast [and regularly in Third Coast’s amazing Re:sound podcas]
. As podcasts make possible the increasing niche-ification of audio micro/broad-casting, I wonder about the cultivation of particular stylized “vocal types.” The “throatily jaded” sound seems to be one of them.

Lo and behold — there’s a name for that odd affectation. And of course it’s not specific to podcasts; it’s a global epidemic! It’s vocal fry. The New York Times ran a story about it in the Science section this week (it’s news for them, but not for vocal scientists — nor for my husband, an actor, who learned lots of vocal tricks in acting school, and who told me about vocal fry a while ago). Young women, it seems, are trend-setters when it comes to vocal stylings:

The latest linguistic curiosity to emerge from the petri dish of girl culture gained a burst of public recognition in December, when researchers from Long Island University published a paper about it in The Journal of Voice. Working with what they acknowledged was a very small sample — recorded speech from 34 women ages 18 to 25 — the professors said they had found evidence of a new trend among female college students: a guttural fluttering of the vocal cords they called “vocal fry.”

A classic example of vocal fry, best described as a raspy or croaking sound injected (usually) at the end of a sentence, can be heard when Mae West says, “Why don’t you come up sometime and see me,” or, more recently on television, when Maya Rudolph mimics Maya Angelou on “Saturday Night Live.”

Some researchers propose that use of the fry is a “natural result of women’s lowering their voices to sound more authoritative.” Or it can be “used to communicate disinterest, something teenage girls are notoriously fond of doing.” Apparently, the trend has spread to the late-20/early-30-something female literati.

Another trend I’ve noticed among the intelligentsia — and I’m certainly not alone in this — is a tendency among speakers at academic conferences (keynoters in particular!) to end their sentences with “right?,” then move quickly along to the next sentence. I’ve heard so many people do this at the last few conferences I’ve attended. Maybe “right” is the new conjunction. Or maybe it’s just filler — a self-assuredly affirmative “um.” Regardless, it irks me in its repeated, arrogant presumption of my agreement. It’s inflected as a question — you with me? — but functions as an imperative: stay with me, dammit! i’m right!

Another rhetorical strategy that I’ve become more conscious of, and which seems to be commonly used during Q&A sessions at academic presentations, is the “That’s interesting, but what I’m interested in is…” evasion. Somebody in the audience will raise a valid question or critique, and rather than engaging with that critique, the presenter frames it as outside his or her area of interest, and thus outside his or her realm of responsibility.

Questioner: “I appreciated your talk, but I wonder how you arrived at the conclusion that video games are a vastly more efficient teaching technology — and that all public schools should trash their books and fill the libraries with X-boxes — when your study ran for only one week, and your sample consisted solely of your son.”

Evader: “That’s super-interestaaaaannng, but what I’m really interested in is [some B.S. that probably includes the phrase “complex interplay].”