Sound is not something merely projected into a space. Space is not merely sound’s container. To the contrary, sound has the potential to define space, to create metaphorical walls. Sound “happens” in space; its waves traverse a distance from source to ear. Furthermore, both sound and space have a structural design, an architectonics. This seminar addresses the sonic qualities of space, the spatial properties of sound, and the myriad other links between space and sound. We will begin by addressing theories of space – particularly those that acknowledge the role of sound, or silence, in shaping and giving character to space. We will then move on to examine some historical examples in which sonic and spatial constructions have worked in concert to define a place in time. The remainder of the semester is devoted to a variety of sound/space applications: artists crafting spaces out of sound, architects creating sonic spaces, sonic landscapes and sculptures, sound in mediated spaces, and auditory media’s role in shaping spaces or demarcating boundaries. Everyone will be asked to complete one mid-semester paper on a topic of his or her choice, and a final group project – either a substantial research paper or a creative project. Throughout the semester, additional assignments will be developed collaboratively between instructors and students. Through the completion of these exercises and weekly reading assignments, weekly attendance, and occasional field trips and guest speakers, students will leave the class familiar with a new body of theory, appreciative of the connections between these seemingly unrelated concepts, and aware of how sound shapes the world we live, and listen, in.

On March 26, 2015, I joined Craig Robertson from Northeastern University, author of a fantastic book on the history of the passport; and Matthew Kirschenbaum from the University of Maryland, author of the much-celebrated Mechanisms: New Media and the Forensic Imagination, for a discussion of “the spatial organization of media” at the annual Society for Cinema and Media Studies conference in Montreal. Lynn Spigel was planning to join us as a respondent, but she was suddenly unable to attend. Craig shared some material from his forthcoming book on the history of the filing cabinet (yay!) , and Matt talked about sand tables — a “furnishing” used for military strategizing (again, yay!). You can see my slides and read the intro to my talk, as well as the abstracts for everyone’s papers, here. 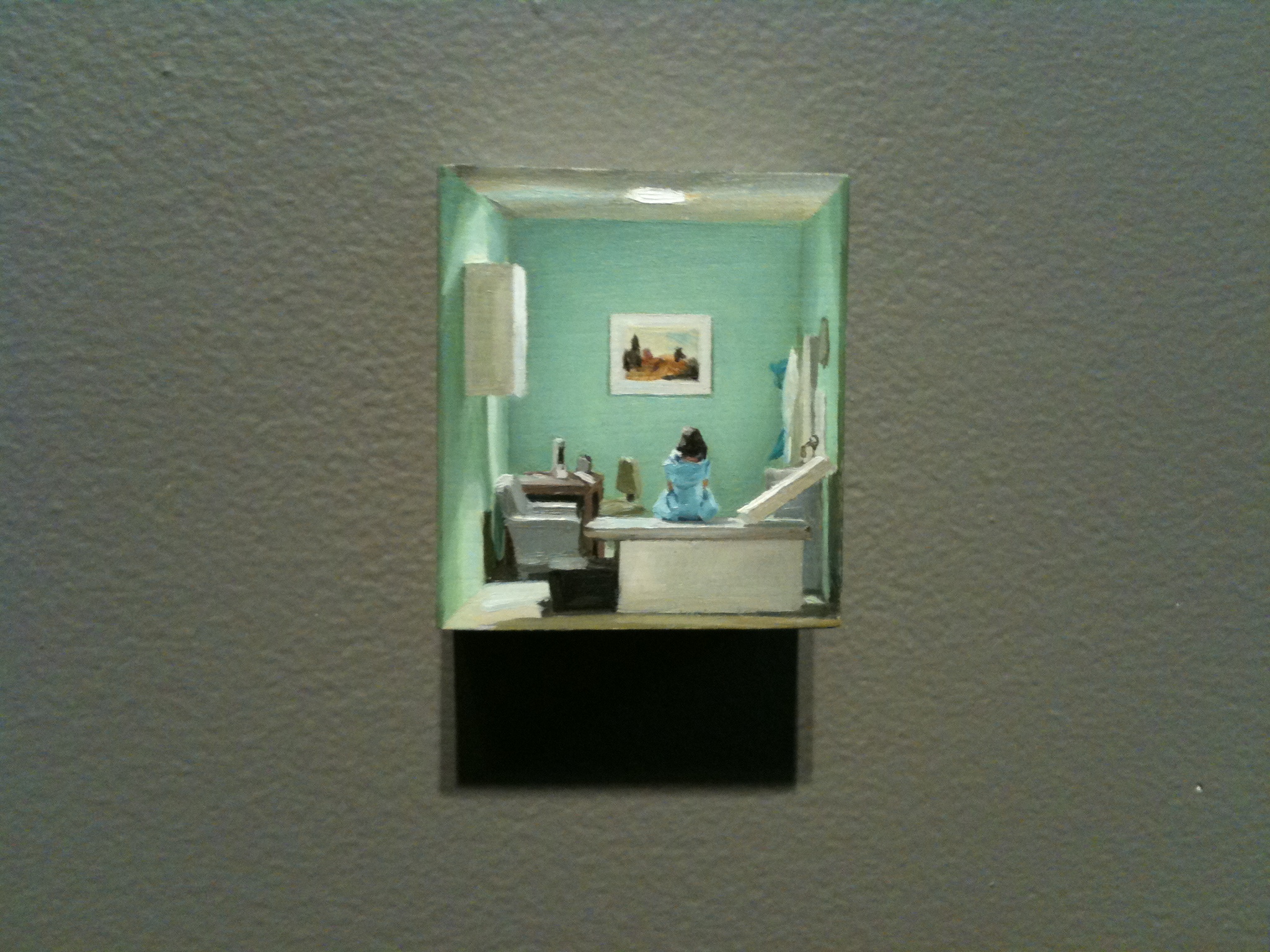 I’m belatedly posting photos from “Otherworldly: Optical Delusions and Small Realities,” which Jess Blaustein and I saw (and loved!) together at the Museum of Art and Design last month. The show was right up both of our (unheimlich) alleys. Jess did some amazing work on dollhouses in her dissertation (which I actually read), and she and I bonded ten years ago at Penn over our shared interest in heterotopias.

I’m posting here primarily so I can remember the show. My crappy iphone photos certainly don’t do justice to the work; there are much better photos on MAD’s website. 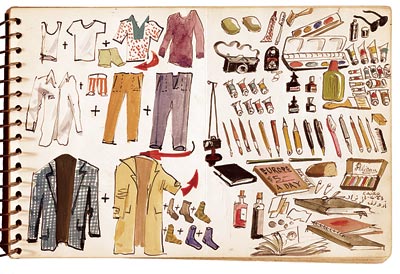 Earlier that afternoon we saw the “Lists: To-dos, Illustrated Inventories, Collected Thoughts, and Other Artists’ Enumerations from the Smithsonian’s Archives of American Art” show at the Morgan Library. I had worked with the curator, Liza Kirwin, last summer on my “Notes, Lists, and Everyday Inscriptions” special issue of The New Everyday. It was great, finally, to see in-person all the artefacts reproduced in the exhibition’s lovely Princeton Architectural Press catalog — but we got the sense that the didactic material in the gallery was a little screwy. Some of the wall texts seems misplaced or redundant.

Charles McGrath wrote in his Times review of the show: “The more you study the Morgan exhibition, the more you realize that lists are everywhere, and that list making is an essential human activity — a way not just of keeping track but also of imposing order on what would otherwise be chaos.” That seems pretty obvious to me. What’s not obvious about the lists on display here — what distinguishes them from the to-do’s I sketch out on napkins and scrap paper — is the fact that these are the enumerations of creative, designerly minds. These are lists of things that typically defy itemization, of concepts spanning a jarring array of rhetorical registers and ontological categories. These are enumerations of a different form and function. Here, aesthetics — what one might regard as “excess” in a form as utilitarian as the list — serves a communicative, a rhetorical, purpose.

In “The Memo and Modernity” John Guillory suggests that, “[i]n our epoch, large numbers of people write, are even compelled to write, but they do not for the most part write poems or scientific papers; they fill out forms, compose memos or reports, send interoffice emails” or make lists. “This writing is informational, and it has the same generic specificity as any other kind of writing.” Kirwin is exploring this generic specificity of the list — and in so doing, she helps to address Guillory’s final question: “why writing has remained the indispensable ‘art of transmission’ in the era of technologically mediated information.”

Today’s New York Times featured an article about the emergence of a “new” field of study called the “Spatial Humanities.” “Like the crew on the starship Enterprise,” the Times‘ Patricia Cohen writes, “humanists are exploring a new frontier of the scholarly universe: space.” I hope the fearsome “Temporal Humanist” gang learns to get along with these new kids.

The Spatial Humanities, despite what its rather peremptory name might lead you to believe, doesn’t have a monopoly on all things spatial. Such a claim would be silly. Scholars — in the humanities and the social and hard sciences — practitioners, artists, etc., have long focused their attention on space.

What these humanist Trekkies are doing that’s different is using digital mapping tools, particularly GIS, and developing new ways to “spatialize” their research material — e.g., plotting the scenes of a narrative on a map, or posting historical photos and audio clips to a map — to address both timeless and new questions in the humanities. The Times article quotes geographer Ann Kelly Knowles, who says: “Mapping spatial information reveals part of human history that otherwise we couldn’t possibly know… It enables you to see patterns and information that are literally invisible.” I’d prefer a slightly more modest claim: creating maps using a combination of GIS, historical maps, sensor data, and other resources, we could possibly see spatial dimensions of history, or of contemporary reality, that might otherwise be difficult to discern. And layering this “data,” then analyzing the intersections of those layers, could enable us to identify meaningful patterns that might be “literally invisible” — they could be created by sounds, or atmospheric conditions — or they could be merely immediately unobservable.

I think it’s important to maintain a degree of modesty in these pursuits: Spatial Humanists certainly aren’t the first people making the “spatial turn,” nor are they the first group to turn a critical eye to maps and mapping technologies, or to use those technologies as valuable research tools. Geographers have been at this for quite a while. Archaeologists and architects and other folks, too.

Yet there are some really exciting potentials in this work. For me, the potential for simultaneity — for layering resources, “data,” arguments, etc., and giving users the option of turning those layers on and off — allows both those creating the maps and those reviewing the completed maps to appreciate the “overdeterminedness,” the richness, the convergence of forces, that make things happen…in space and time. These are, as David Brodenhamer puts it in the Times article, “’deep maps,’ which can capture more than one perspective.” Historical events, demographic shifts, climatic changes — all, if plotted out on a map, show themselves to be highly spatio-temporally complex phenomena, hard to sum up, hard to pin down in a linear narrative.