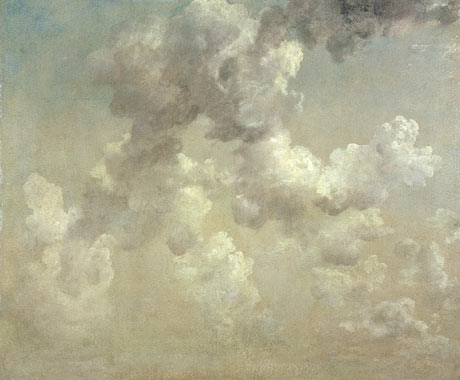 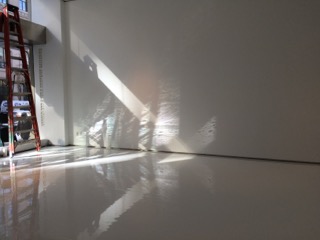 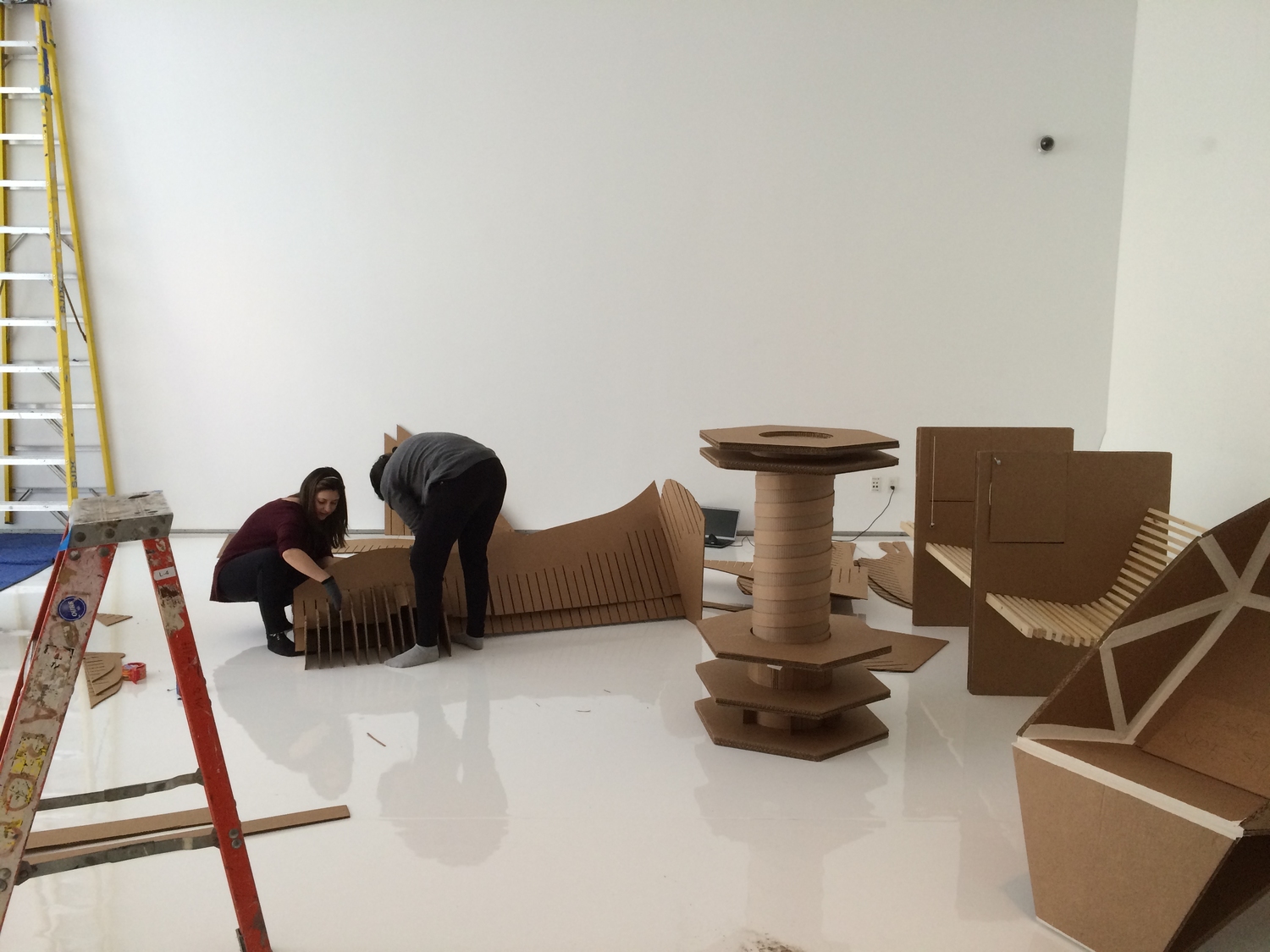 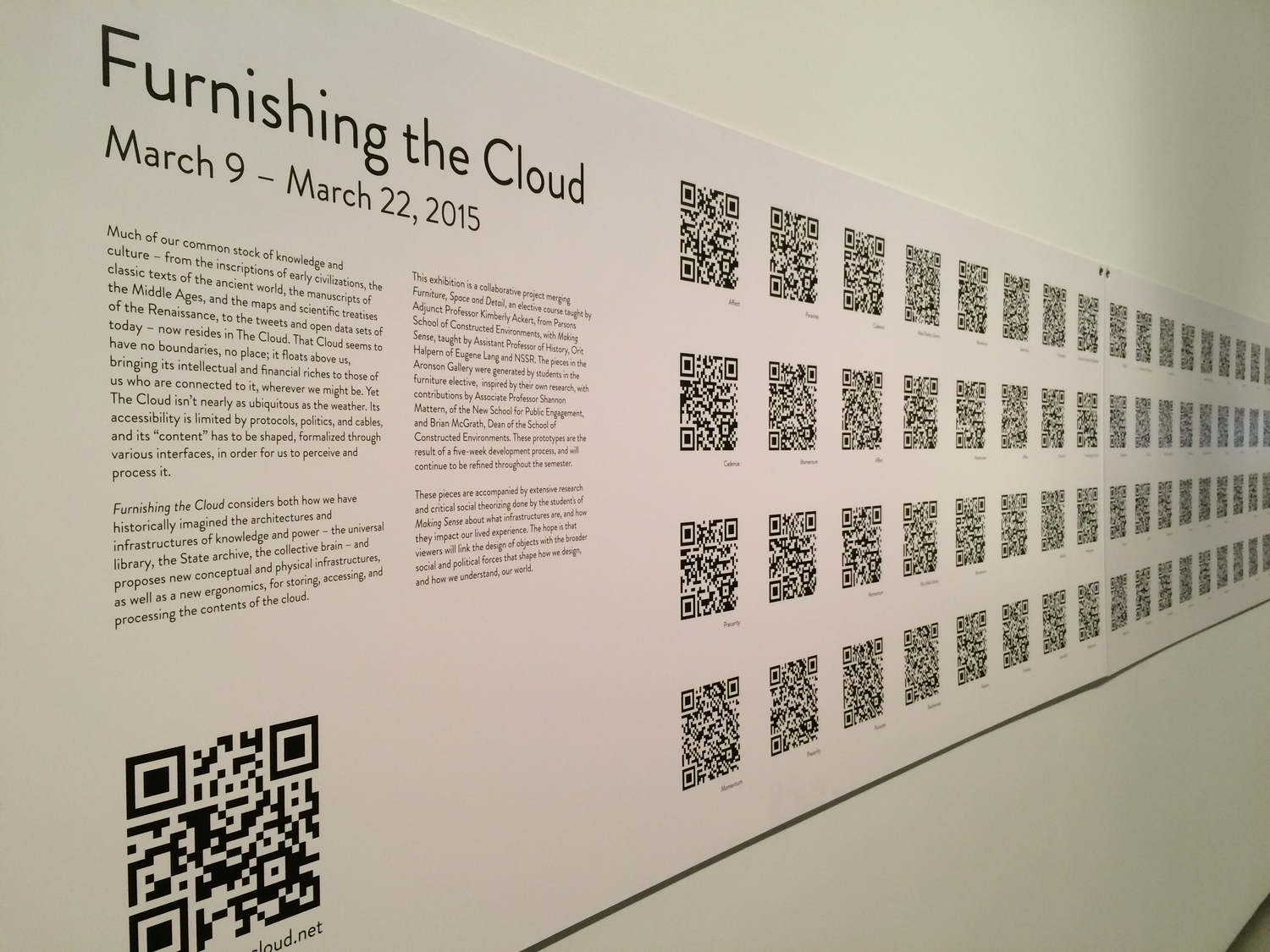 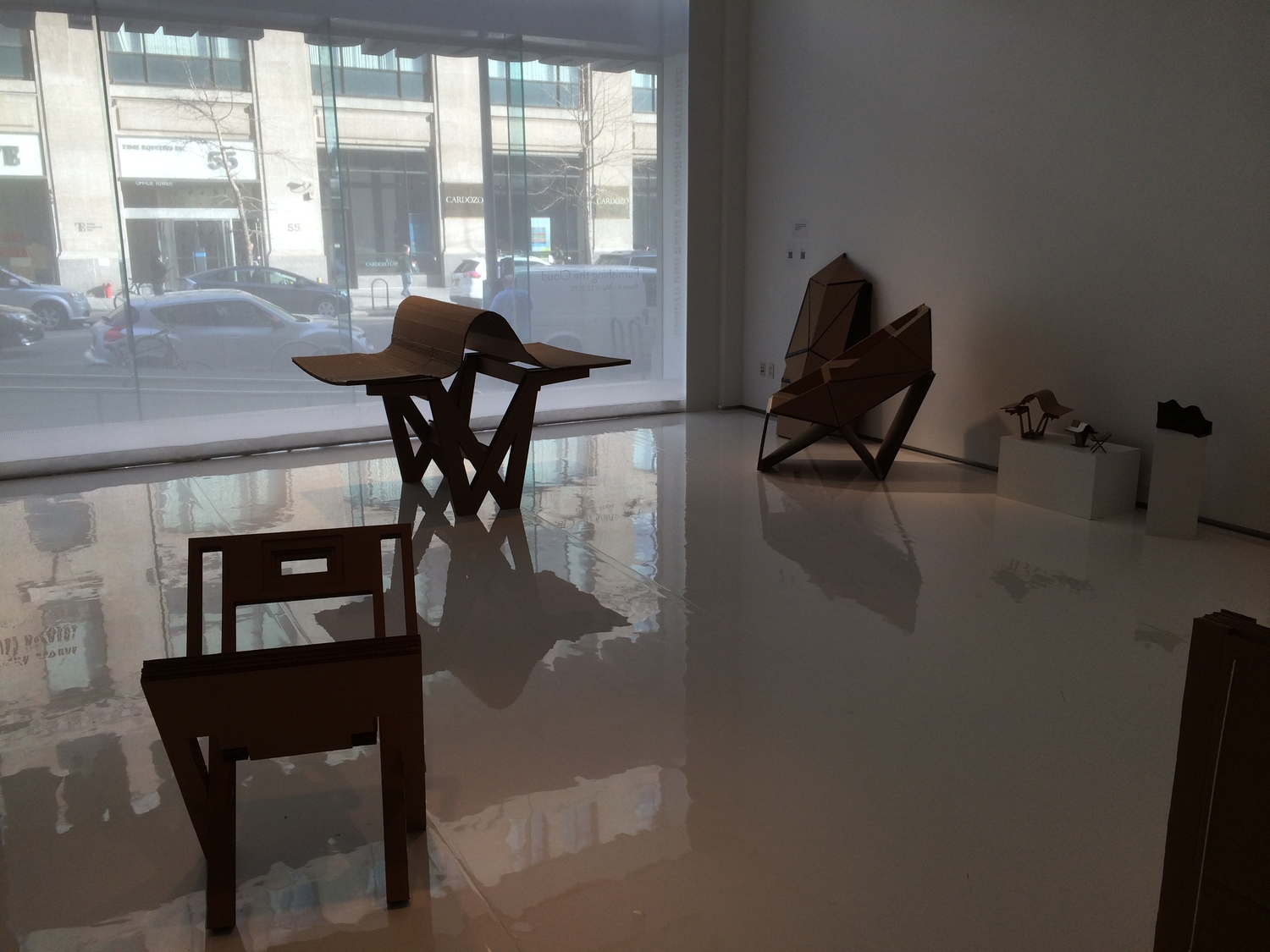 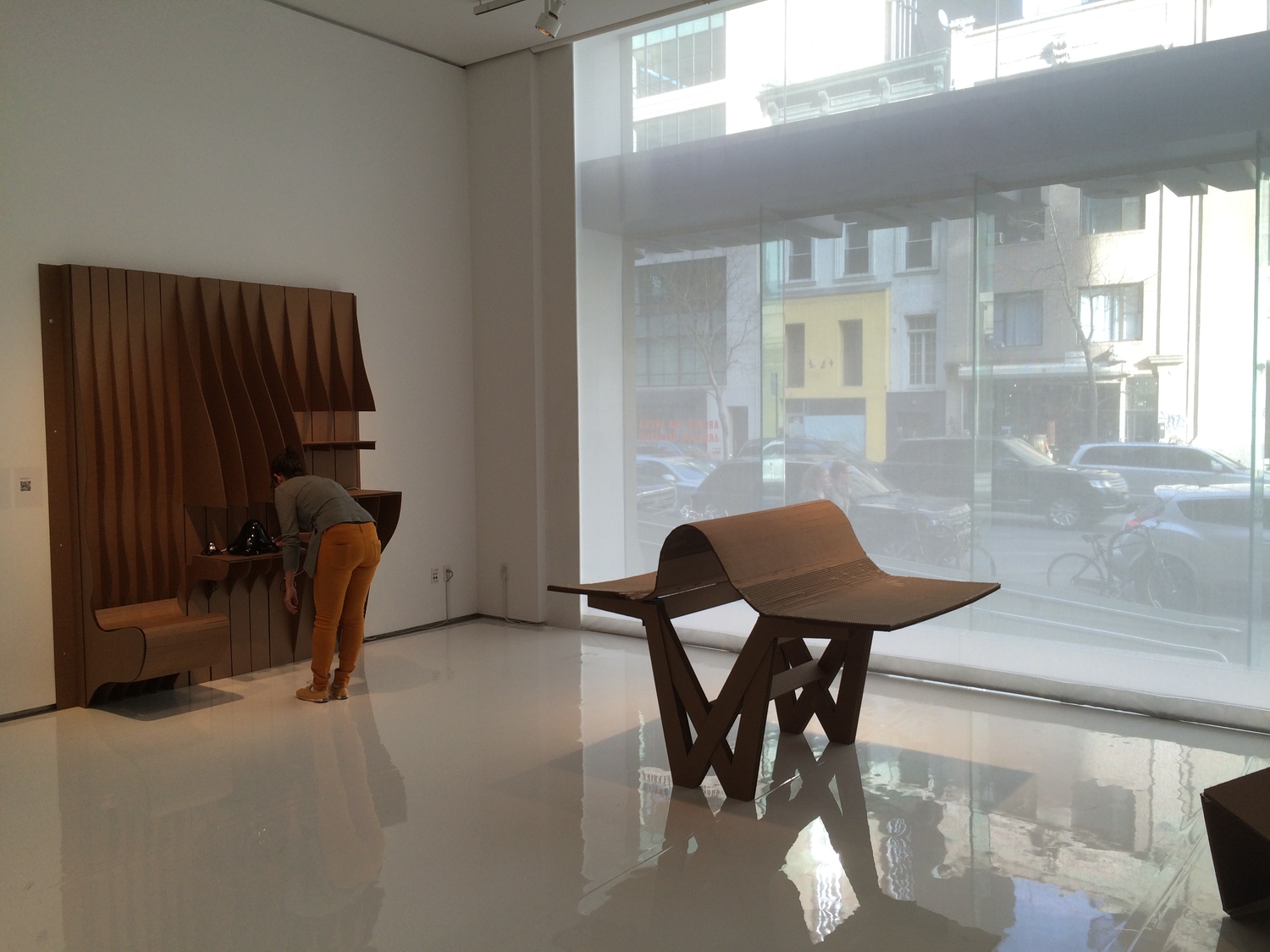 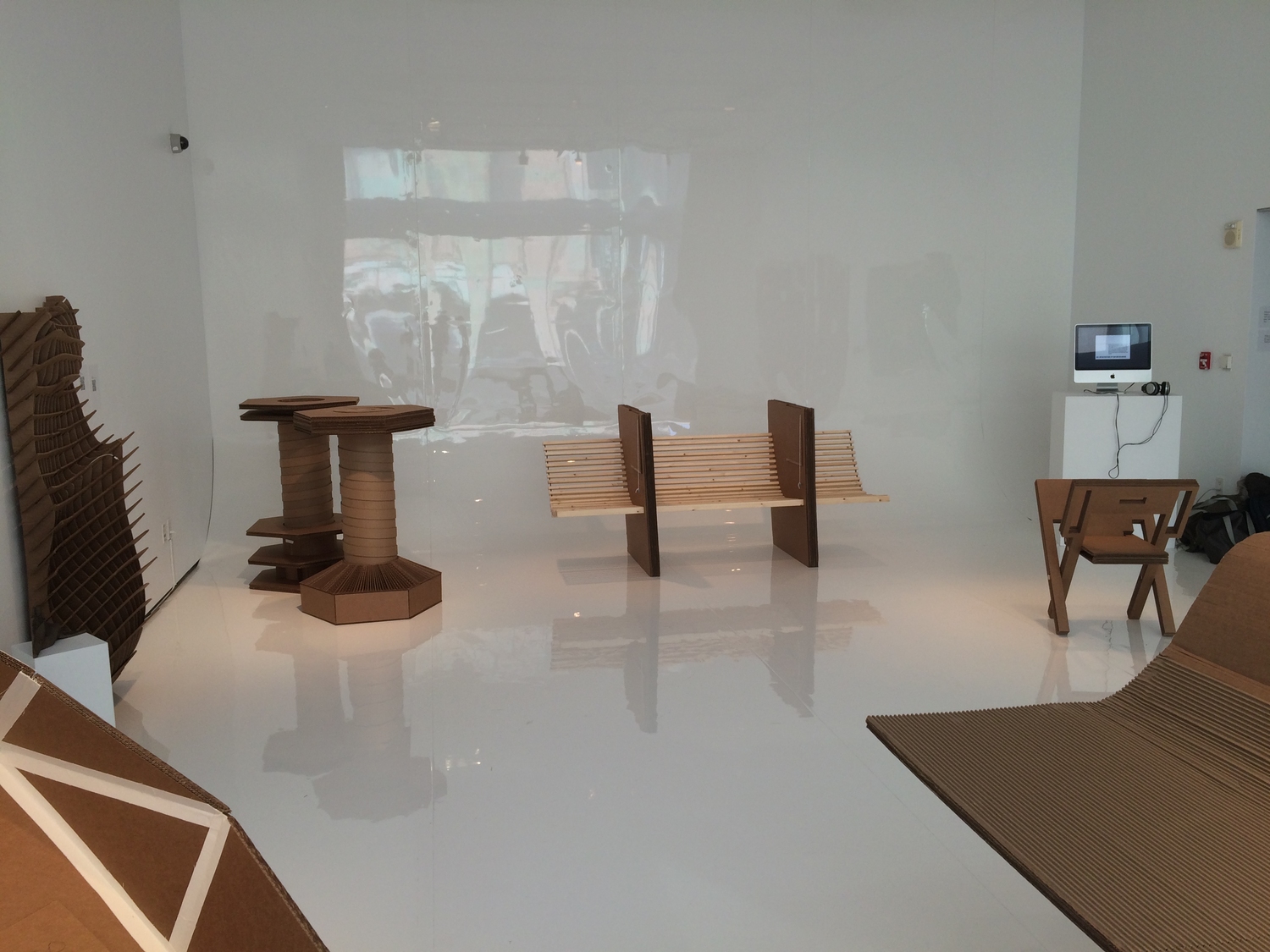 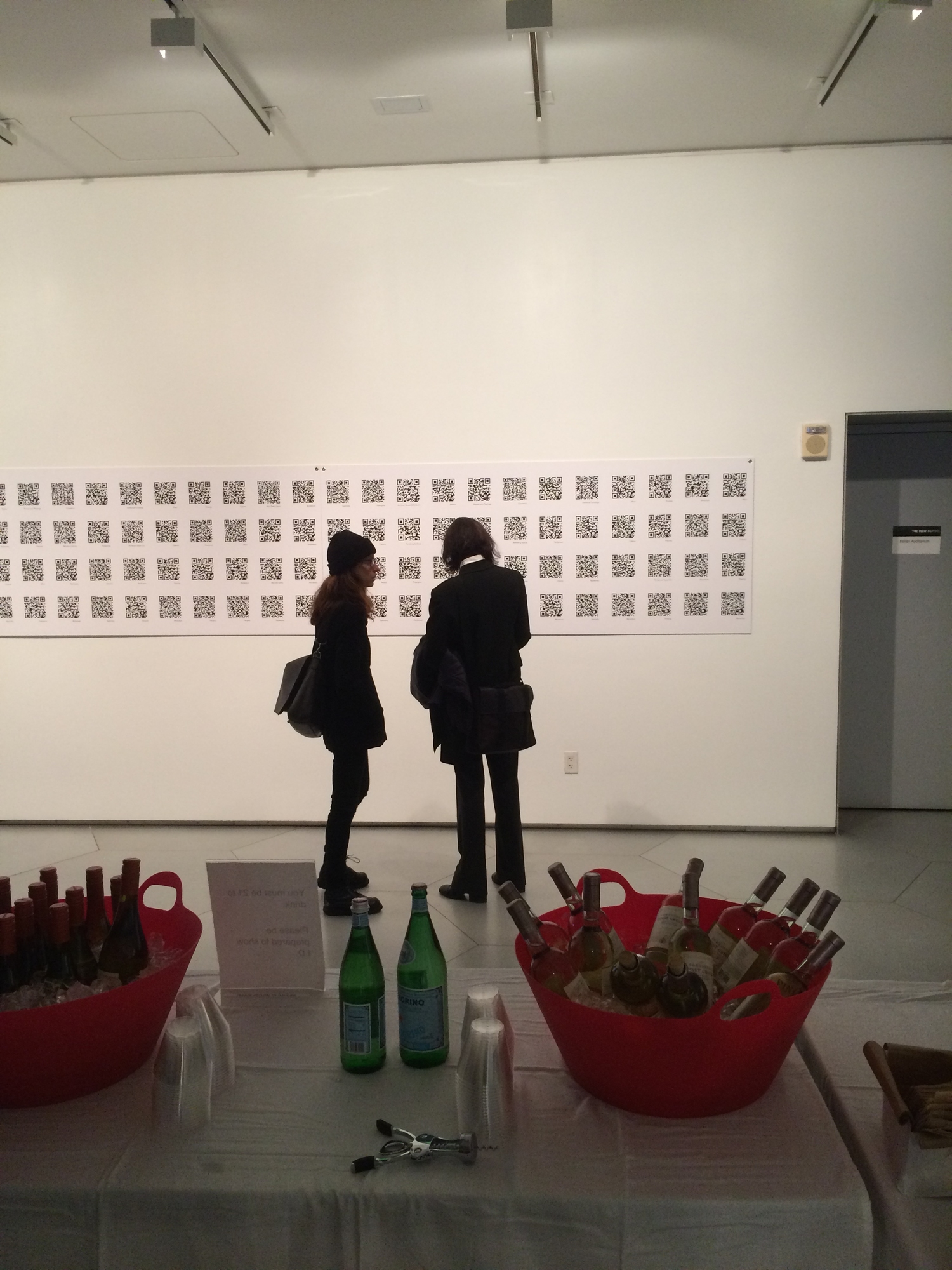 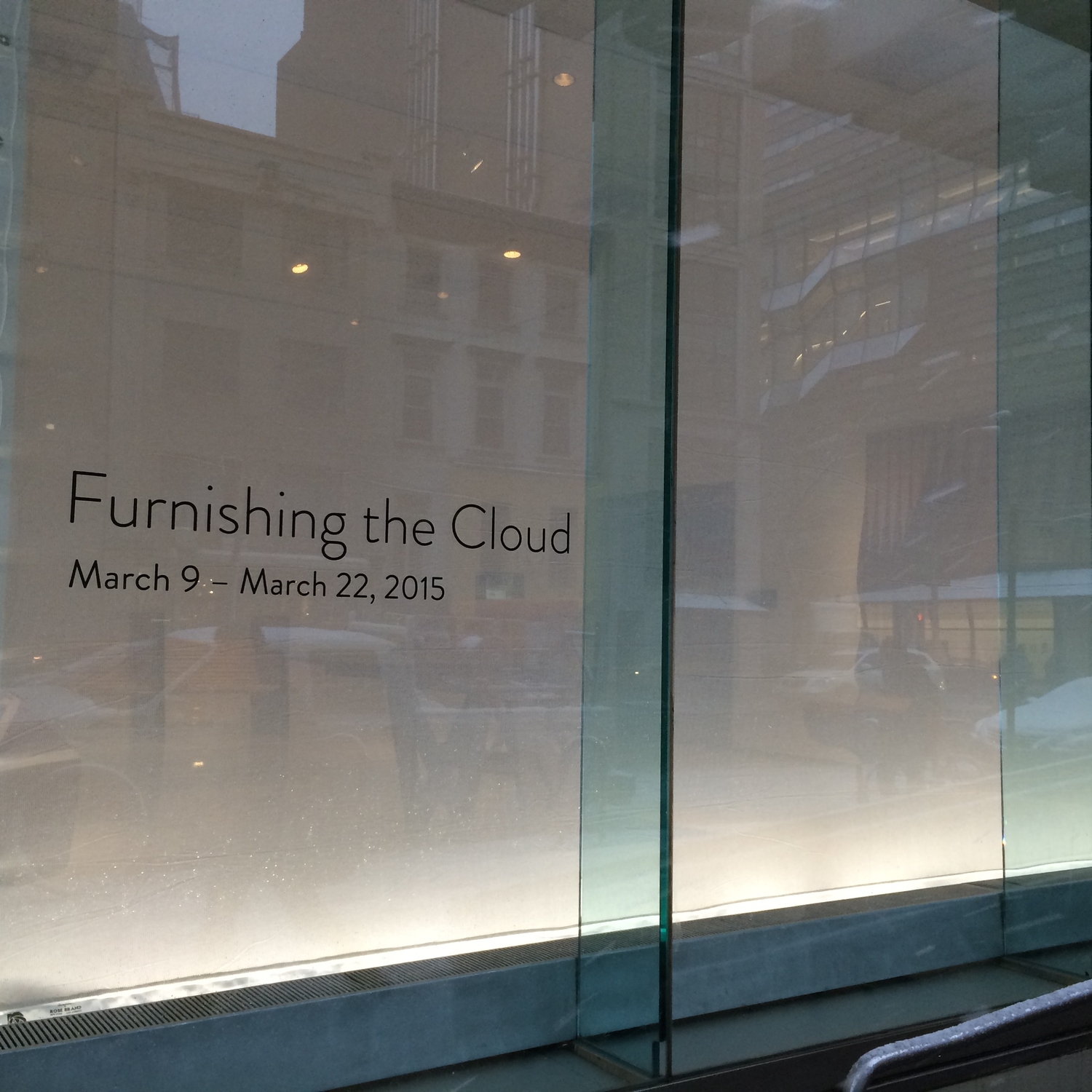 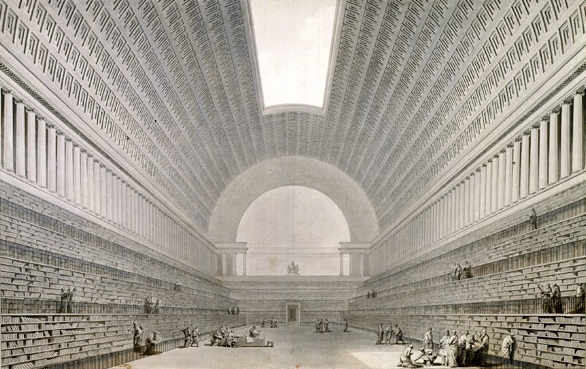 I partnered with my fellow Emergent Infrastructures research group collaborators Brian McGrath, Orit Halpern, and architect Kim Ackert, along with Radhika Subramaniam and the staff from the Sheila Johnson Design Center, to organize a March 2015 exhibition on the future of knowledge institutions, to be hosted in The New School’s Aronson Gallery. “Furnishing the Cloud” ran from March 9 through 22. I documented and reflected on the project here.

For the past year-and-a-half I’ve been collaborating with my friends and colleagues Orit Halpern and Brian McGrath (and, much earlier in the process, with Jane Pirone, Jessica Irish, and Rory Solomon) on a grant-supported exploration of “emergent infrastructures.” We decided that, rather than submitting our final report in the form of a traditional report — or organizing a traditional who’s who symposium — we’d create a new “knowledge infrastructure” for thinking about knowledge infrastructures. Hence “Furnishing the Cloud“: the exhibition!

We welcomed architect and exhibition/furniture designer Kim Ackert into our group last fall to help us begin devising concrete plans for this highly immaterial concept. And this spring Kim’s furniture design class — to which I contributed on several occasions (they used my “Intellectual Furnishings” work as one of their foundational texts) — was charged with rethinking the ergonomics and architectures necessitated by our digital media devices. They created, using CNC routers and other computational fabrication technology, full-scale cardboard prototypes of their mobile-reading seating, charging stations, data shelving, etc.

The rudimentary materiality of these pieces– skilled, if rough, construction using seemingly-primitive materials — stood in stark contrast to the sleek gallery surfaces: Kim and Jordana Goot, an amazingly talented architecture/lighting design student and installation designer, wrapped the room in white vinyl; shielded the front window, which looks out onto 5th Avenue, in a gossamer scrim; and played with the lighting in an attempt to make gallery visitors feel as if they were walking amongst the clouds.

Meanwhile, Orit’s spring history class investigated various affective, political, cultural, temporal shifts that the cloud has stirred up: parasites, precarity, a drive toward preemption, restlessness, spectrality. They developed online research dossiers for our FurnishingTheCloud project website, and some students from my fall Archives/Libraries/Databases class refined their own projects for the exhibition website, too: Laura Sanchez developed her “Rethinking Libraries for the Information Age,” a summary of and response to the 2014 Architectural League of NY / Center for an Urban Future branch library design study, in which both Laura and I participated. And Eishin Yoshida expanded her “My Little Library,” an exploration of the books and other media resources that cycle in and out of our lives, and how they take on new personal meaning — and enter into new relationships with one another — as our projects develop and our attentions shift.

The FurnishingTheCloud website also features dossiers from the furniture design students, who display precedent studies, chronicle the evolution of their designs, share renderings of the pieces (hypothetically) in use. They’ll be developing their designs — transforming these prototypes into finished pieces — over the course of the semester.

Each project — both the material furnishings in the gallery and the virtual projects that helped to contextualize the exhibited objects — received its own QR code. And all of those codes were displayed in a grid on the lobby wall outside the gallery. We mirrored the wall perpendicular to the rows of codes, hoping that the reflected codes would create a sense of infinite regress, data overload — much like Boulee’s library.

My original idea was to transform this lobby wall into a material manifestation of data overload — and a literal palimpsest of past, present, and future conceptualizations of the cloud. I envisioned Constable and Turner and Van Gogh clouds mixed in with various renderings of “trees of knowledge,” layered atop photos of data centers, mosaicked with neural nets and database architectures, and with the QR codes pinned on top. That didn’t happen.

The show took place in The New School’s Aronson Gallery from March 9 through March 22. Here’s the wall text I wrote:

Much of our common stock of knowledge — from the inscriptions of early civilizations, the classic texts of the ancient world, the manuscripts of the Middle Ages, and the maps and scientific treatises of the Renaissance, to the tweets and open data sets of today — now resides in The Cloud. That Cloud seems to have no boundaries, no place; it floats above us, bringing its intellectual riches to those of us who are connected to it, wherever we might be. Yet The Cloud isn’t nearly as ubiquitous as the weather. Its accessibility is limited by protocols and cables, and its “content” has to be shaped, formalized through various interfaces, in order for us to perceive and process it.

Furnishing the Cloud considers both how we have historically imagined the architectures and containers of our common stock of knowledge — the universal library, the endless bookshelf, the collective brain  — and proposes new conceptual and physical infrastructures, as well as a new ergonomics, for storing, accessing, and processing the contents of the cloud.

Parsons’ Insights wrote about the show here. My own school, as usual, didn’t really seem to notice. Oh, man — did I just say that? 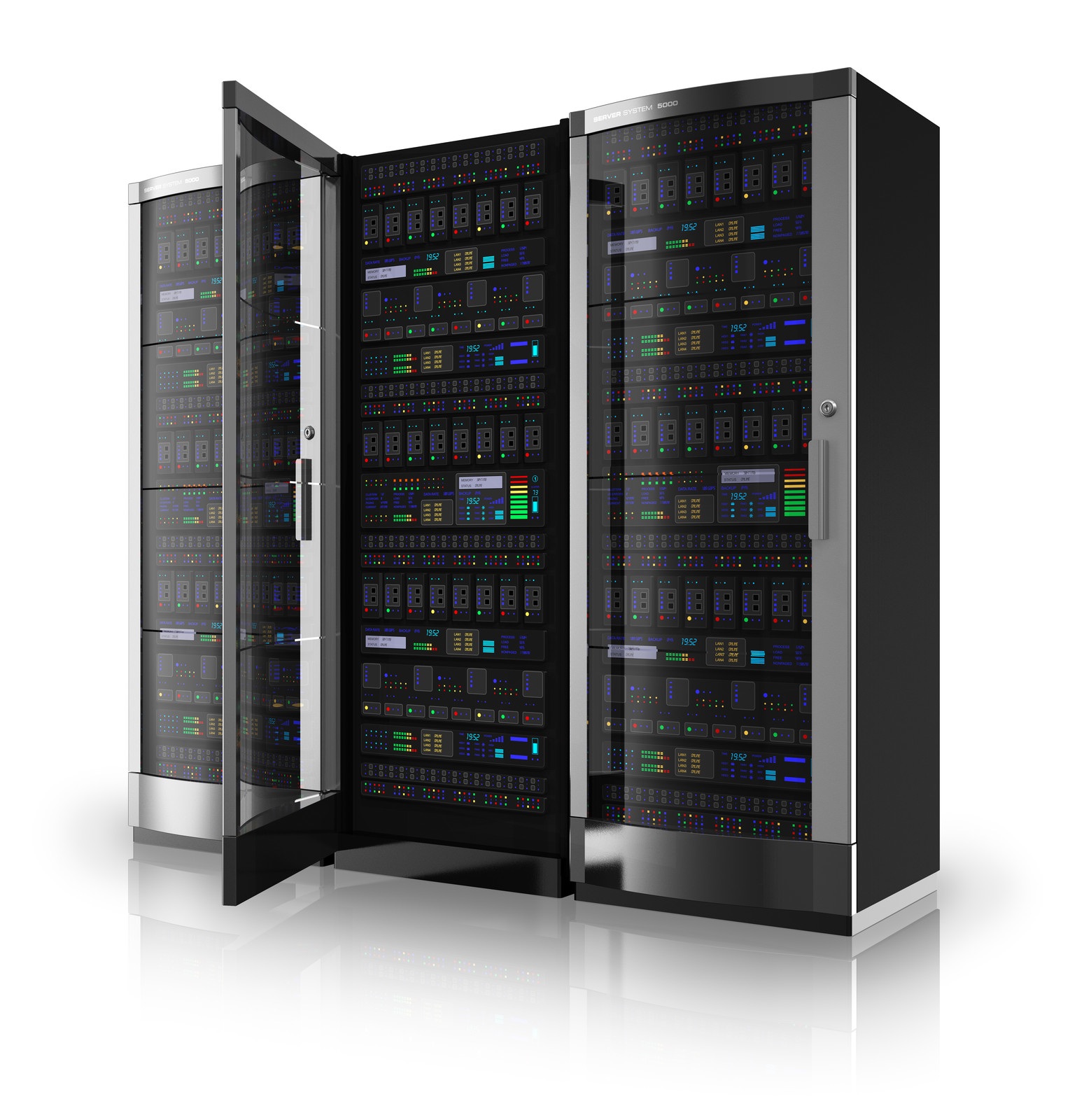 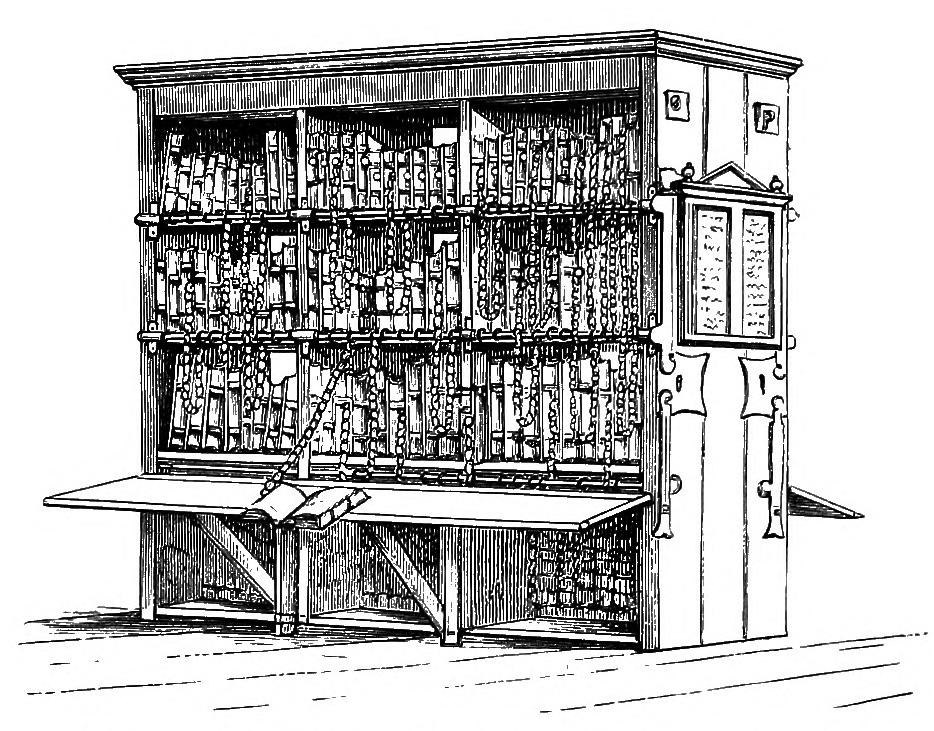 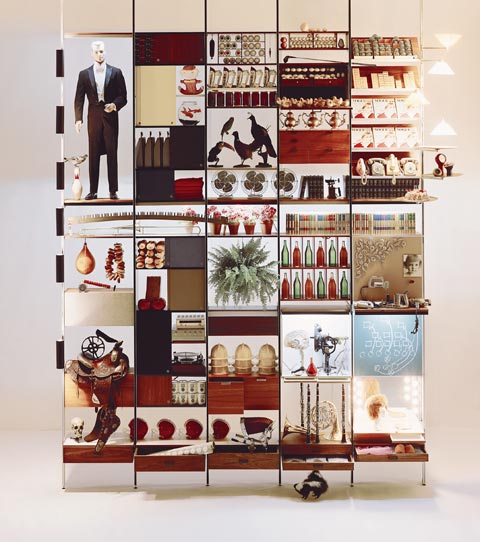 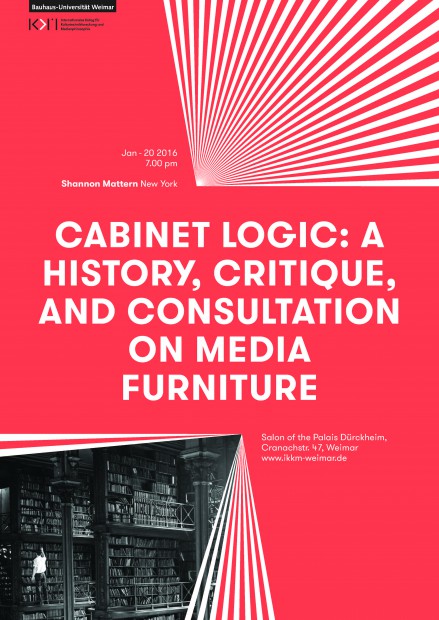 On January 20, 2016, while I was serving as a senior scholar at the IKKM at the Bauhaus University, I presented “Cabinet Logic: A History, Critique, and Consultation on Media Furnishings.” You can find a video of my talk here.

While the material qualities of our media technologies, and our material engagements with them, have evolved over the millennia – and particularly within the past decade – we still rely on physical supports, furnishings, to scaffold our interactions with media. Even “the cloud” that seems to float above us today relies on heavy architecture for its operation. These furnishings – bookshelves, desks, charging stations, server racks, and even beds, as more and more of us not only read but also watch movies and tackle emails from under the sheets – serve as material supports for the storage and delivery of media resources, while they also frame organizational systems and embody particular technical protocols. These structures render complex intellectual and political ideas material and empirical. In this project I aim to study how the design of organizational furnishings, both physical and conceptual, give form to epistemology, politics, and affect.

On November 7, 2014, I presented “Intellectual Furnishings” as part of the bi-weekly workshop for the Graduate Institute for Design and Ethnography, where I served as a faculty fellow. I examined media-furnishings — bookshelves, server racks, writing desks, cord-managing computer furniture, etc. — as epistemic and affective devices. You can find my “working paper” here.