Over the past month I’ve seen a number of exhibitions and attended several events that seem to have grouped around a few themes — namely, the aforementioned books, barges, bones, and biographies.

“[I]
comprises two collections, of books and artifacts, both drawn from ten years and twenty issues of Dexter Sinister’s house journal Dot Dot Dot. Each one of the artifacts served as original source material for an illustration accompanying an essay in an issue of the journal, and the bound books collate the most frequently cited works in Dot Dot Dot” (via).

I’ve been following, and admiring, their work for years, and I’ve availed myself of the many pdfs they make available on their website, which is regarded as part of the new Serving Library. I still don’t think I fully get what they’re going for here — particularly with the physical space — but I’m going to keep trying; I know there’s something there to get. 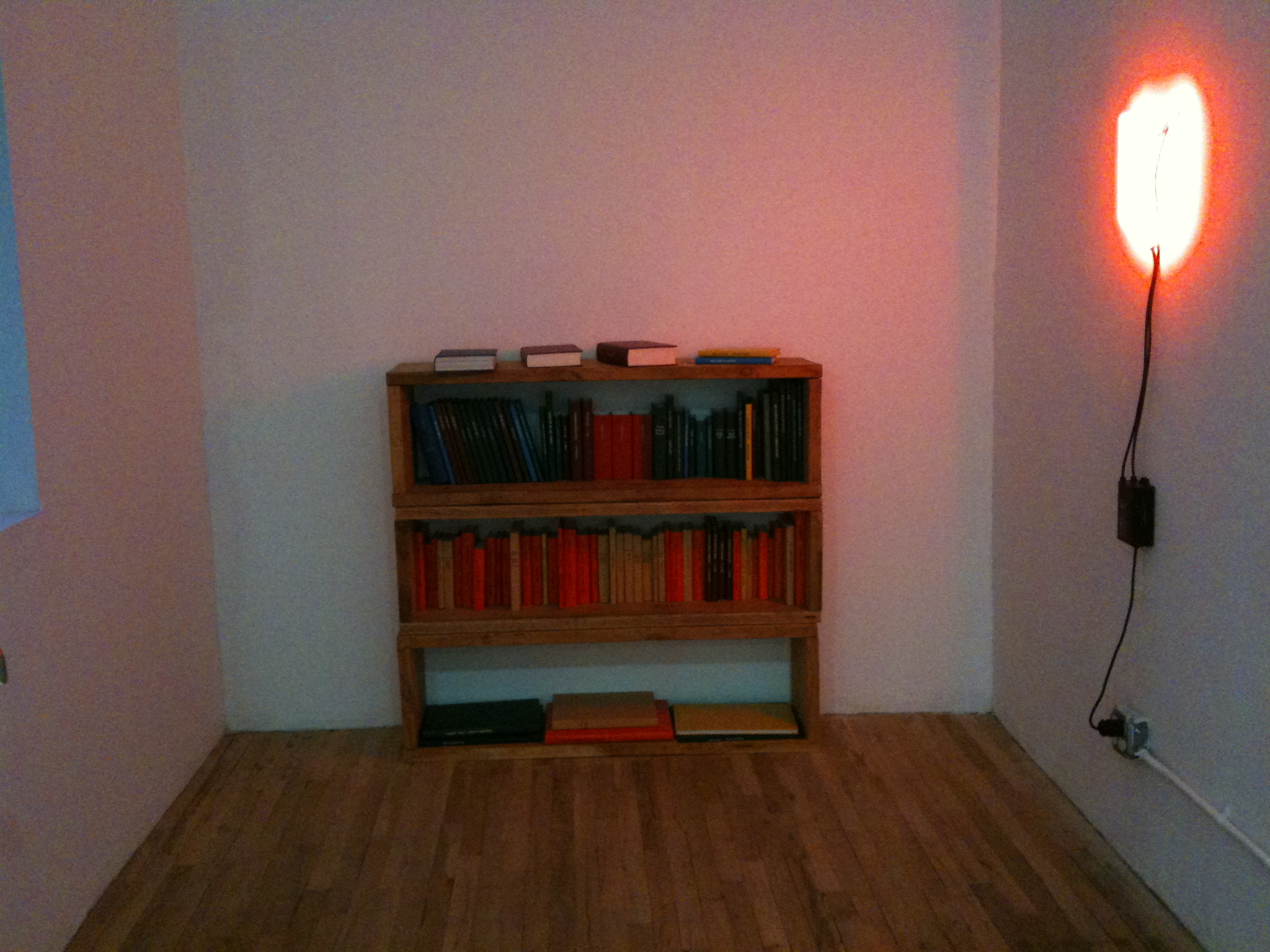 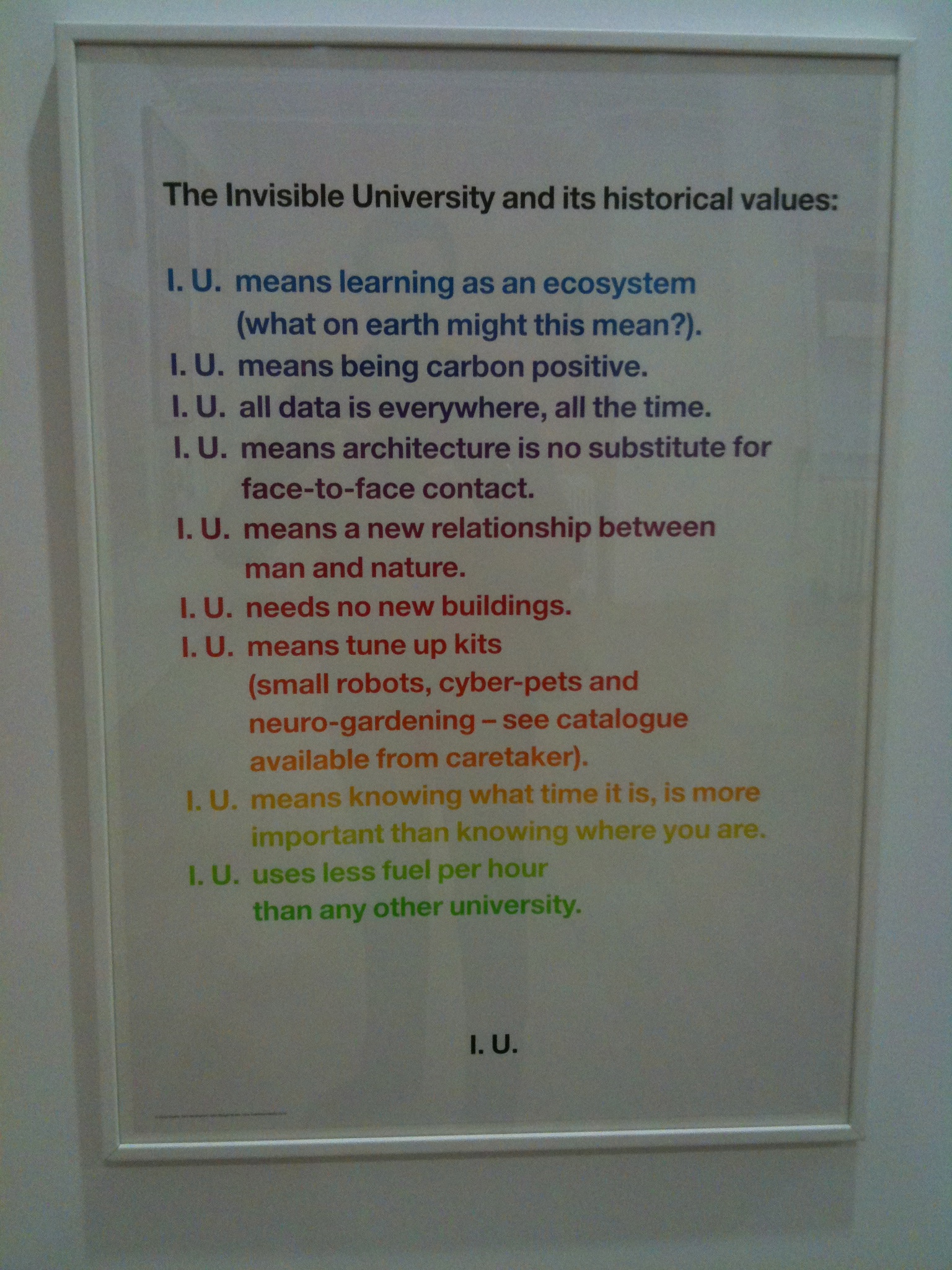 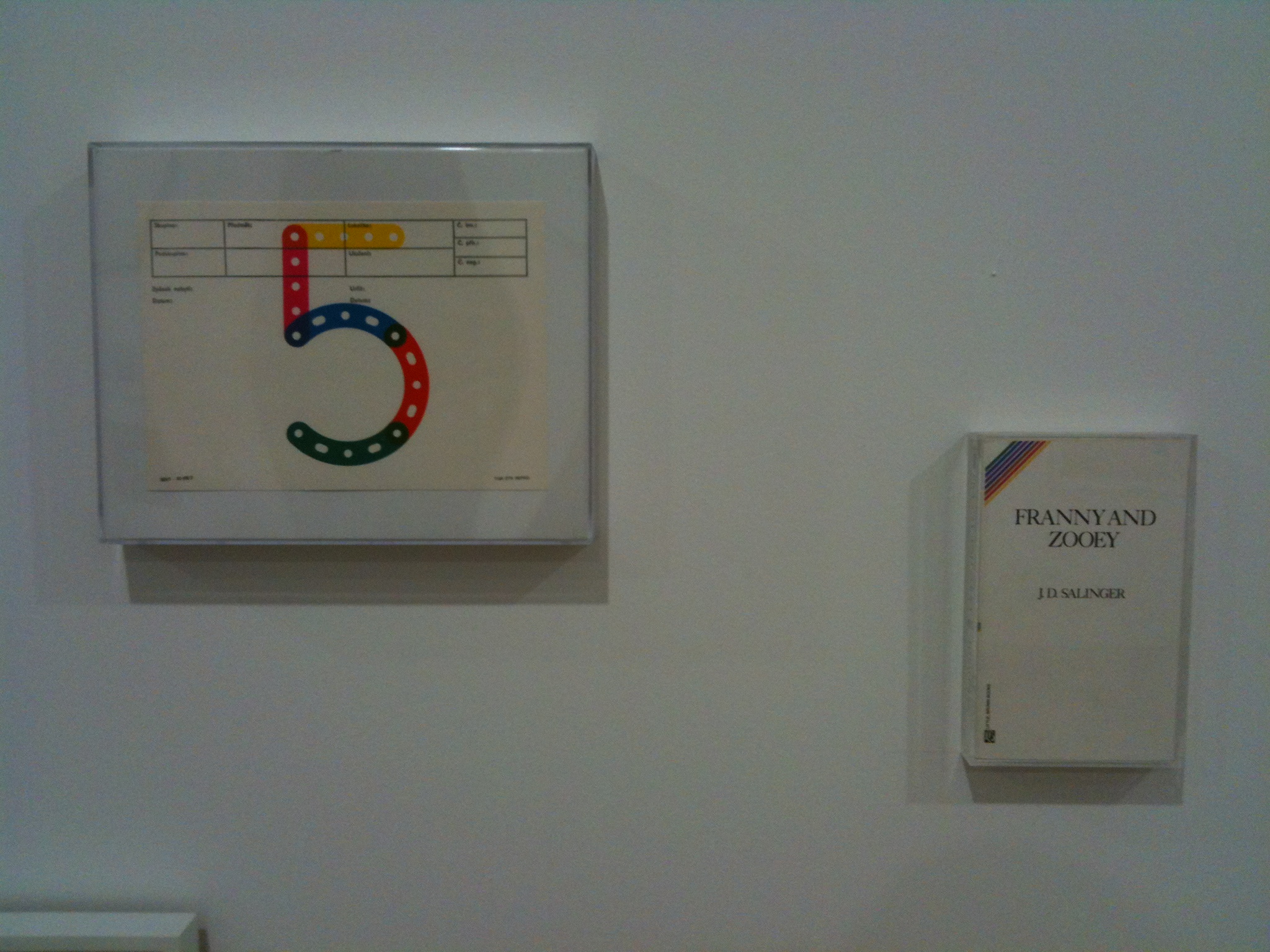 The Identity piece, which “charts the emergence and proliferation of graphic identity since the turn of the twentieth century, with particular reference to contemporary art institutions,” wasn’t what drew me in initially, but I found it quite riveting. Rob Giampietro posted a lovely talk, related to the exhibition and to Artists Space’s own graphic identity, that he was invited to give a couple years ago.

Then this past weekend my husband and I went to the the New Museum to hear Paul Chan’s “proposition,” “What is a book?” I had heard him speak briefly about his Badlands Unlimited project at the Triple Canopy “On Artists’ Publications” panel discussion this past summer, so I was looking forward to hearing him contextualize his work within a larger discussion of “the medium.” No such luck, unfortunately. He started off promisingly, referencing a little scholarship on the history of the book, but spent the majority of his time portraying publishing as a vanity pursuit driven by nepotism and extreme privilege. Don’t get me wrong: I enjoy the work, but I’m not sure that I can valorize his process.

And just last night I went to Storefront, on a whim, to the “On Architecture and Publishing” salon. As often happens in discussions that dare to predict the future of print, the conversation at times descended into generalizations and essentialisms: print is tactile and therefore better able to embody the “craft” of architecture!; “we read differently today,” so we need new publication forms to accommodate this new reading!; by the time something’s printed in a magazine, it’s old news!, etc., etc.  Storefront’s director, Eva Franch, who remembered me from the Critical Futures event back in March, asked me to say something, so I did. Eva herself made some astute comments regarding the temporal dimensions of publishing and reading in various media. I ran into my friend Robert Kirkbride there, and he and I had a lovely, if brief, after-event conversation with Benjamin Prosky, one of the panelists and Assistant Dean for Communications at Harvard Graduate School of Design. I found many, many parallels between last night’s salon, the Critical Futures panel, and some of the ideas I was playing with in my “Click/Scan/Bold” article.

Okay, now on to barges:

There’s really only one event in this category, but it was sufficiently memorable to deserve its own space. Last Monday night, after I taught my lecture class in Tishman Auditorium, the Vera List Center hosted, in the very same space, a screening of Allan Sekula & Noël Burch’s The Forgotten Space.

The Forgotten Space follows container cargo aboard ships, barges, trains and trucks, listening to workers, engineers, planners, politicians, and those marginalized by the global transport system. We visit displaced farmers and villagers in Holland and Belgium, underpaid truck drivers in Los Angeles, seafarers aboard mega-ships shuttling between Asia and Europe, and factory workers in China, whose low wages are the fragile key to the whole puzzle. And in Bilbao, we discover the most sophisticated expression of the belief that the maritime economy, and the sea itself, is somehow obsolete (via).

It’s no small feat to convey the unfathomable complexity and overlapping scales of global capitalism — and, in the process, to portray this actor-network as simultaneously gorgeous and hideous, as sublime. The film does precisely this.

We might say that The Forgotten Space unearths the physical and virtual “skeleton” of global transit and trade — so we’ll transition into our third theme: bones.

Last month I attended part of the Forensic Aesthetics conference, co-organized by the Vera List Center, Goldsmiths, Bard, and Cabinet. Here’s the official explanation for this provocatively titled event:

…[T]he emergence of forensics in legal forums and popular entertainment signifies a new attention to the communicative capacity, agency, and power of things. This material approach is evident in the ubiquitous role that science and technologies now play in shaping contemporary ways of seeing, knowing, and communicating. Today’s legal and political decisions are often based upon the capacity to display and read DNA samples, 3D laser scans, nanotechnology, and the enhanced vision of electromagnetic microscopes and satellite surveillance. From mass graves to retinal scans, the topography of the seabed to the remnants of destroyed buildings, forensics is not only about the diagnostics, but also about the rhetoric of persuasion. The aesthetic dimension of forensics includes its means of presentation, the theatrics of its delivery, the forms of image and gesture. The forensic aesthetics of the present carries with it grave political and ethical implications, spreading its impact across socioeconomic, environmental, scientific, and cultural domains (via).

I missed the first evening’s events, a panel on osteobiographies (which would’ve made for a lovely transition into my fourth theme, material biographies — but alas) at Cabinet, but I was able to enjoy the first two panels — on “Forensic Architecture” and “Constructed Evidence” — on Saturday. The concreteness of these two panels made them extraordinarily compelling. While Norman Weiss (a fantastic presenter!) talked about the restoration of Fallingwater, we held a piece of FLW concrete in our hands. While Arne Svenson discussed his portraits of forensic heads, Linda — a bespectacled head with quite a head of hair — stared at us from the center of the table. The set up of the conversations — speakers surrounding a round table strewn with the objects under consideration; chalkboard at hand for impromptu illustrations; audience ringing the table — made for a palpable intimacy befitting forensics‘ etymological connection to “the forum.” 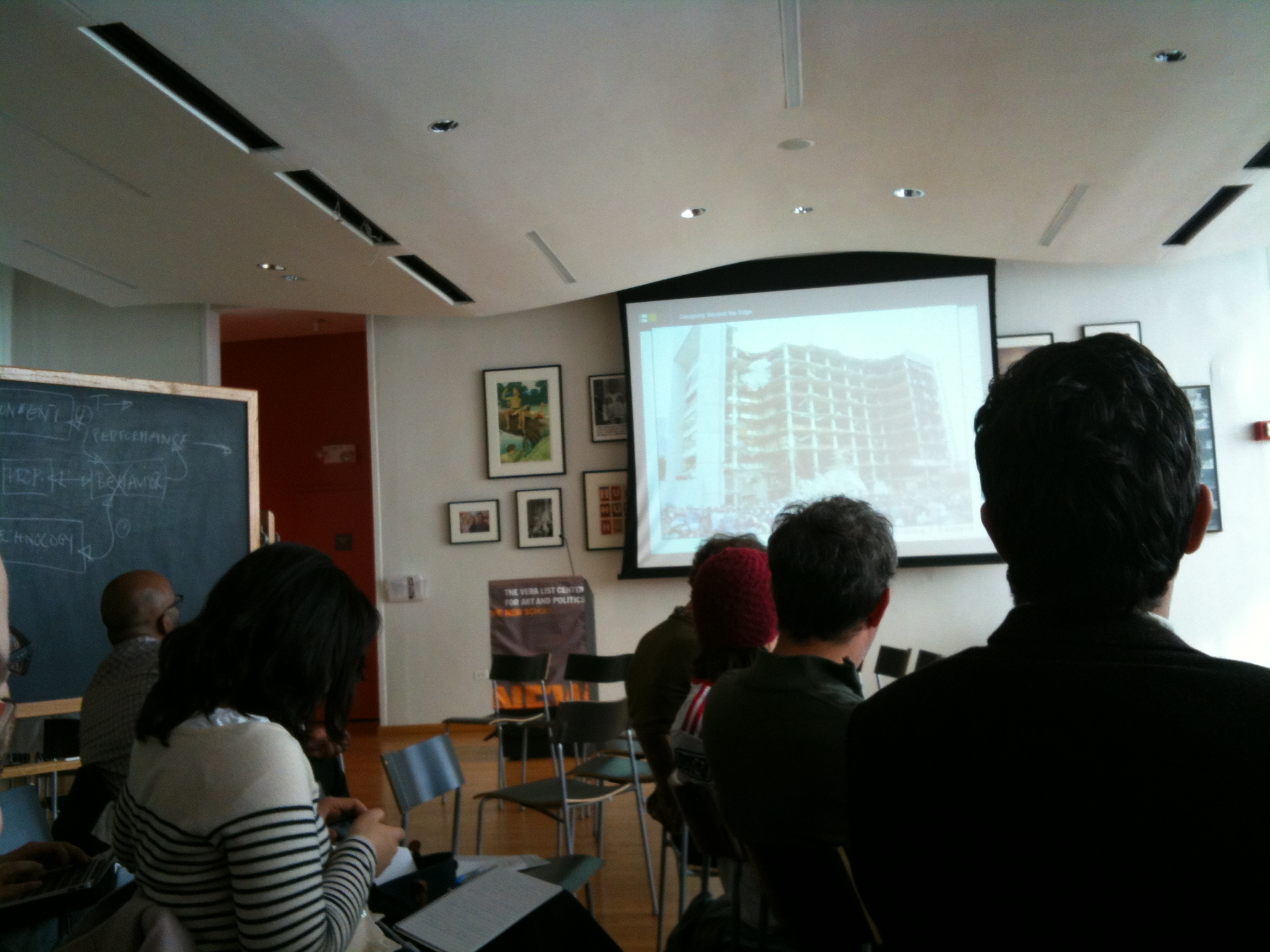 Arne’s portraits also served as a means of constructing biographies for — perhaps, as his gallery suggests, “bring[ing] back to life” — unidentified victims whose only material existence is through the form of a sculpted head.

Which brings us, of course, to my fourth category: material biographies. 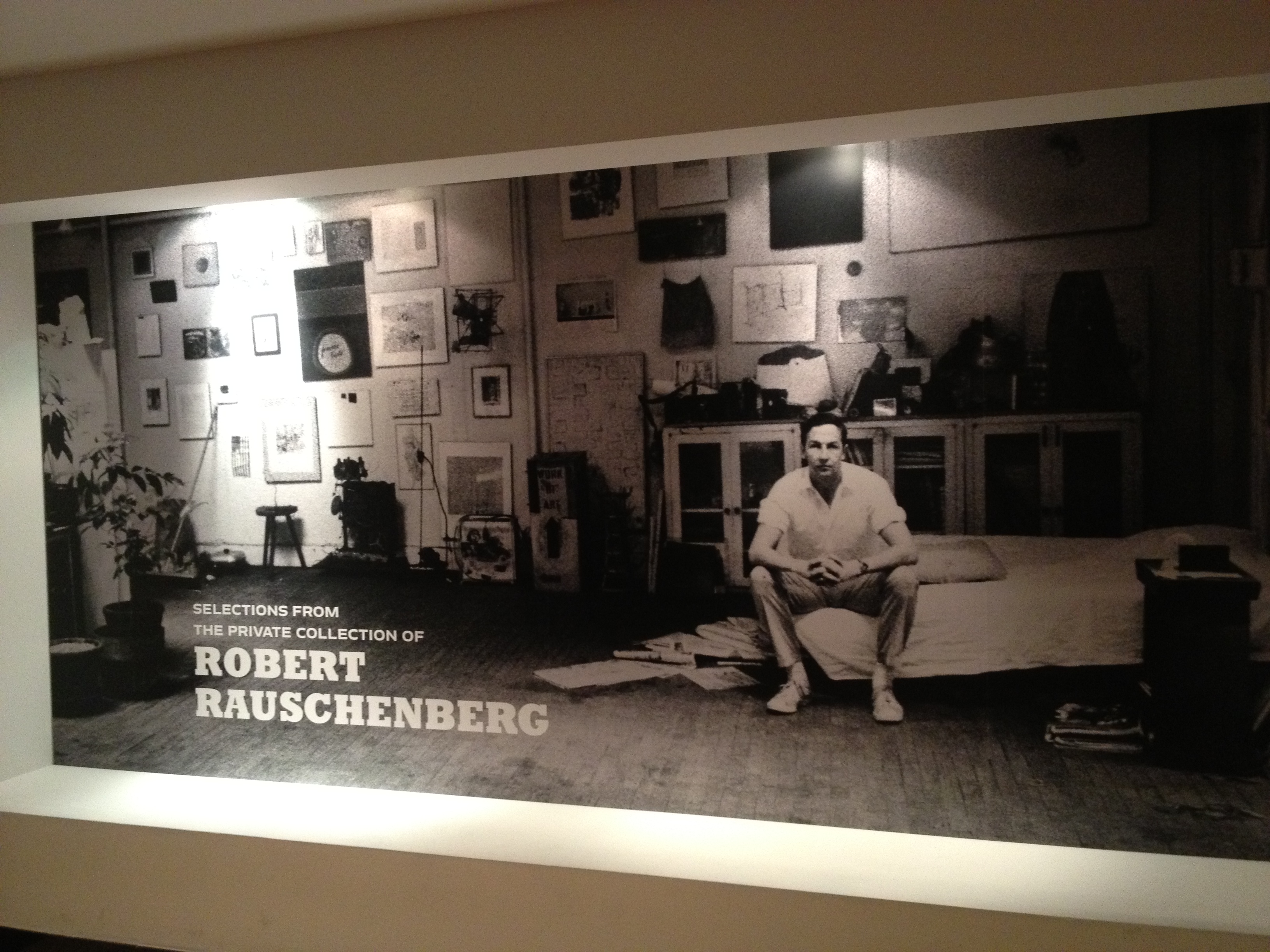 This week I saw three exhibitions that captured, through media of multiple formats, the intellectual and creative lives of three fascinating individuals. The Private Collection of Rauschenberg, on display at the uptown Gagosian, displays art-objects and memorabilia that Rauschenberg traded with, or was “gifted” by, his friends and colleagues. In the Times, Roberta Smith referred to the exhibition, appropriately, as a “self-portrait collage. Nearly every item here is a glimpse of a connection between Rauschenberg and the artists he felt close to, as well as the various aesthetic ancestors from past generations and across cultures that he wanted present in his life in some way.” It’s a touching show, and there’s beautiful work here — much of it by many of my own favorite artists. Cy Twombly drew “Bob” several portraits of flowers as an expression of thanks for his frequent hospitality. I found the musical scores, especially John Cage’s Haiku, particularly beautiful.

And today I saw “Resonance: Looking for Mr. McLuhan” at the Pratt gallery near my office. McLuhan’s own ideas were so expansive and encompassing that pretty much all art mediums could be said to illustrate one of his “probes.” Perhaps for this reason, the show didn’t gel for me. It contained some interesting work (I can’t not  appreciate text or typographic art, and there was some of that here), but it relied a bit too heavily on some McLuhan cliches — there were quite a few references to the TV set as form — and was so wide-ranging that it needed a little more contextualization. 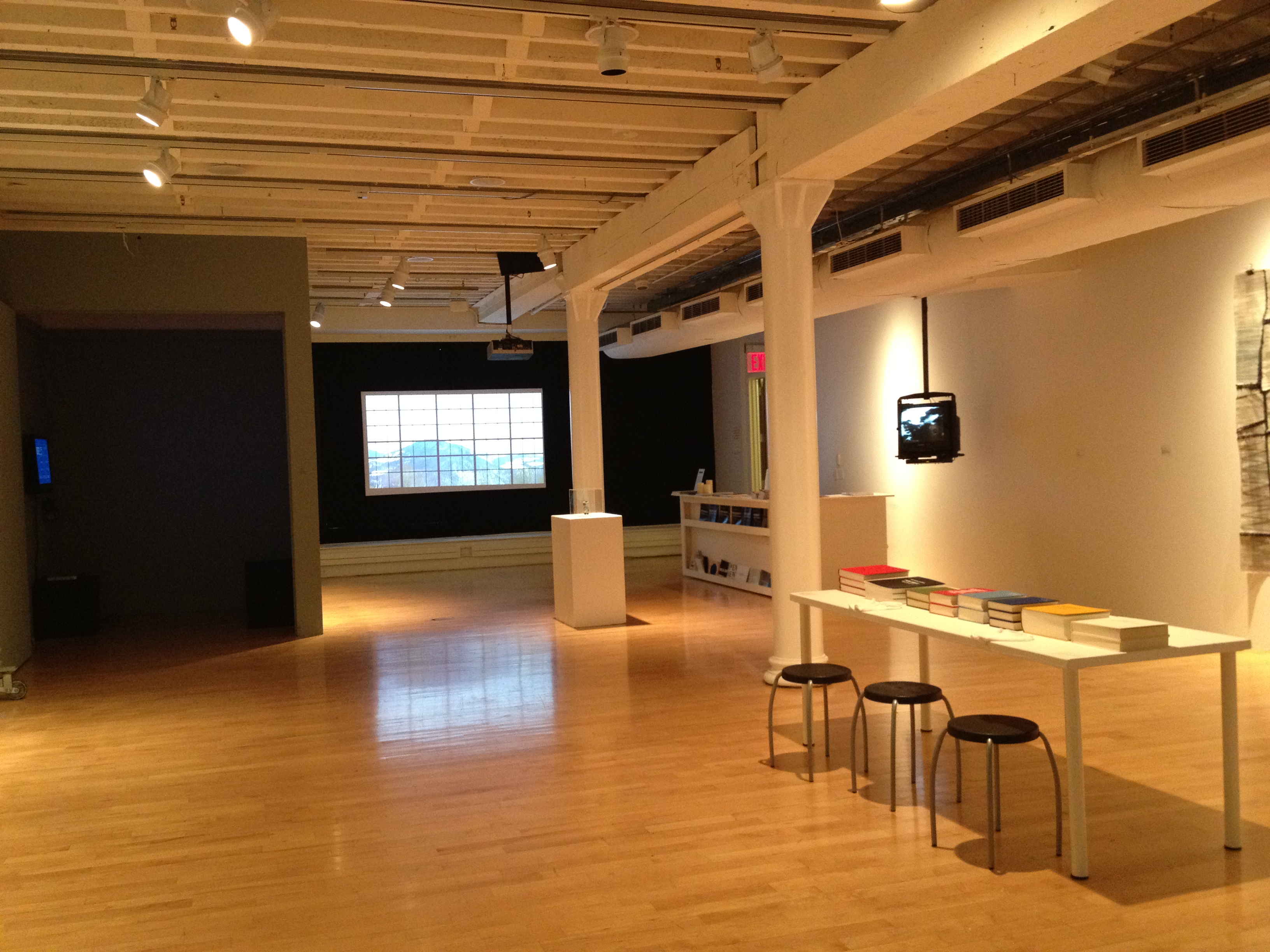 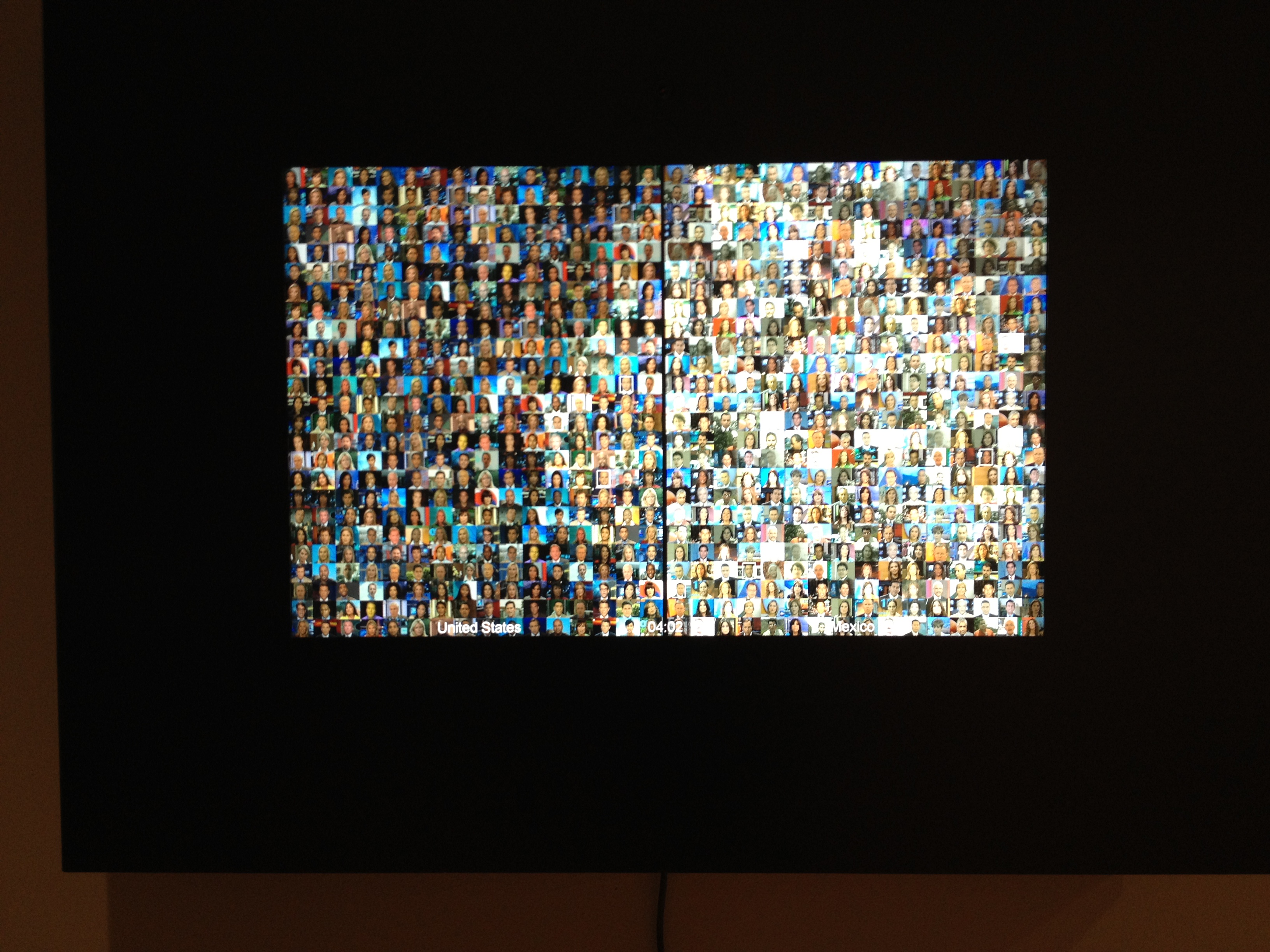 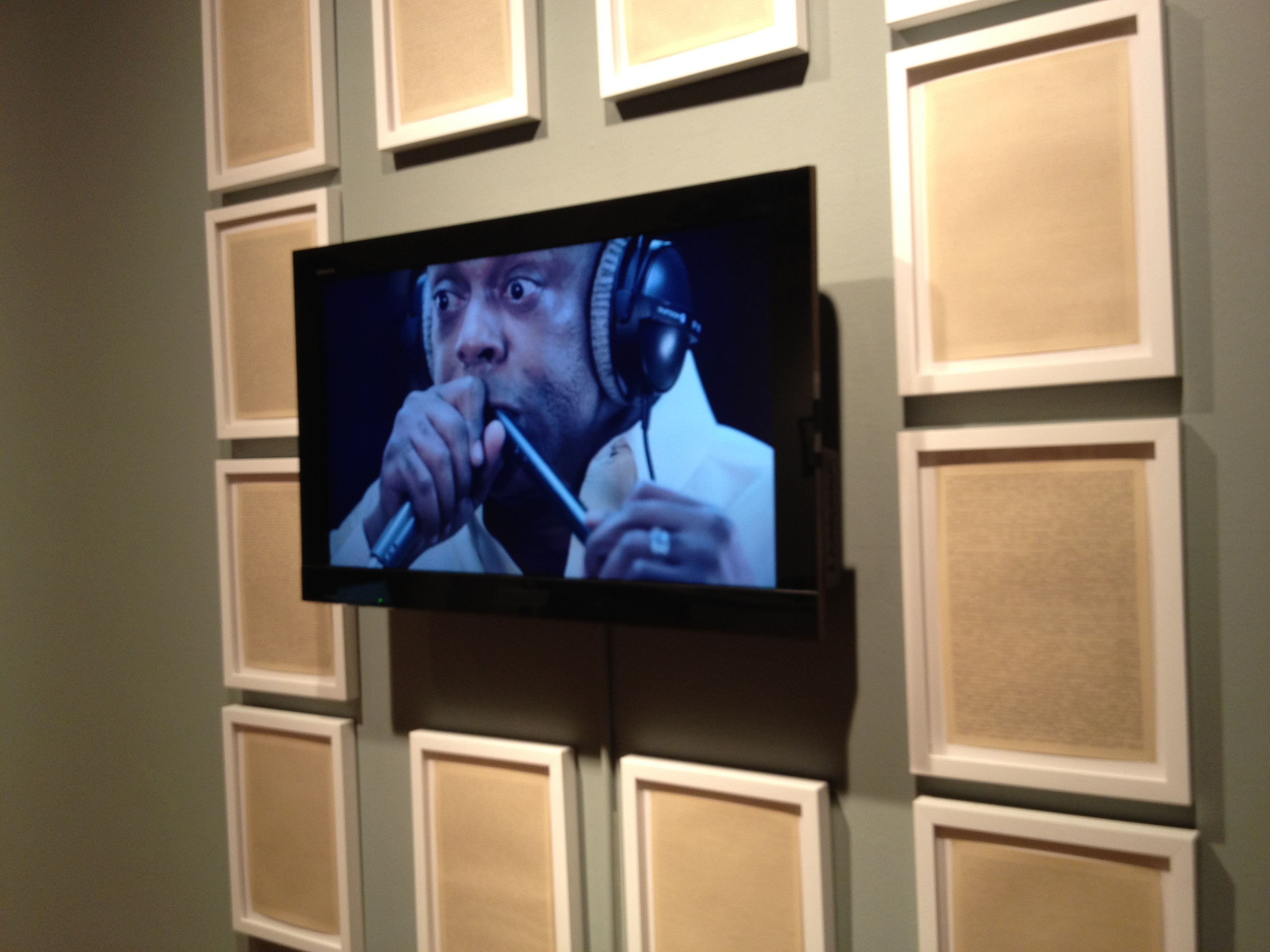 And finally, this past weekend I saw “The Study of Kabakov” — Ilya Kabakov — at Edelman Arts. The exhibition featured, in one half of the gallery, several works on paper, and in the other half, a “white glove” library of reference books on Kabakov. Through published work and primary documents — drawings — we are invited to piece together biographies, not only of Kabakov himself, but also of the “10 Characters” the artist portrayed in drawings he collected into “albums. And thus the writing of material biographies brings us back to the book. And so I stop. 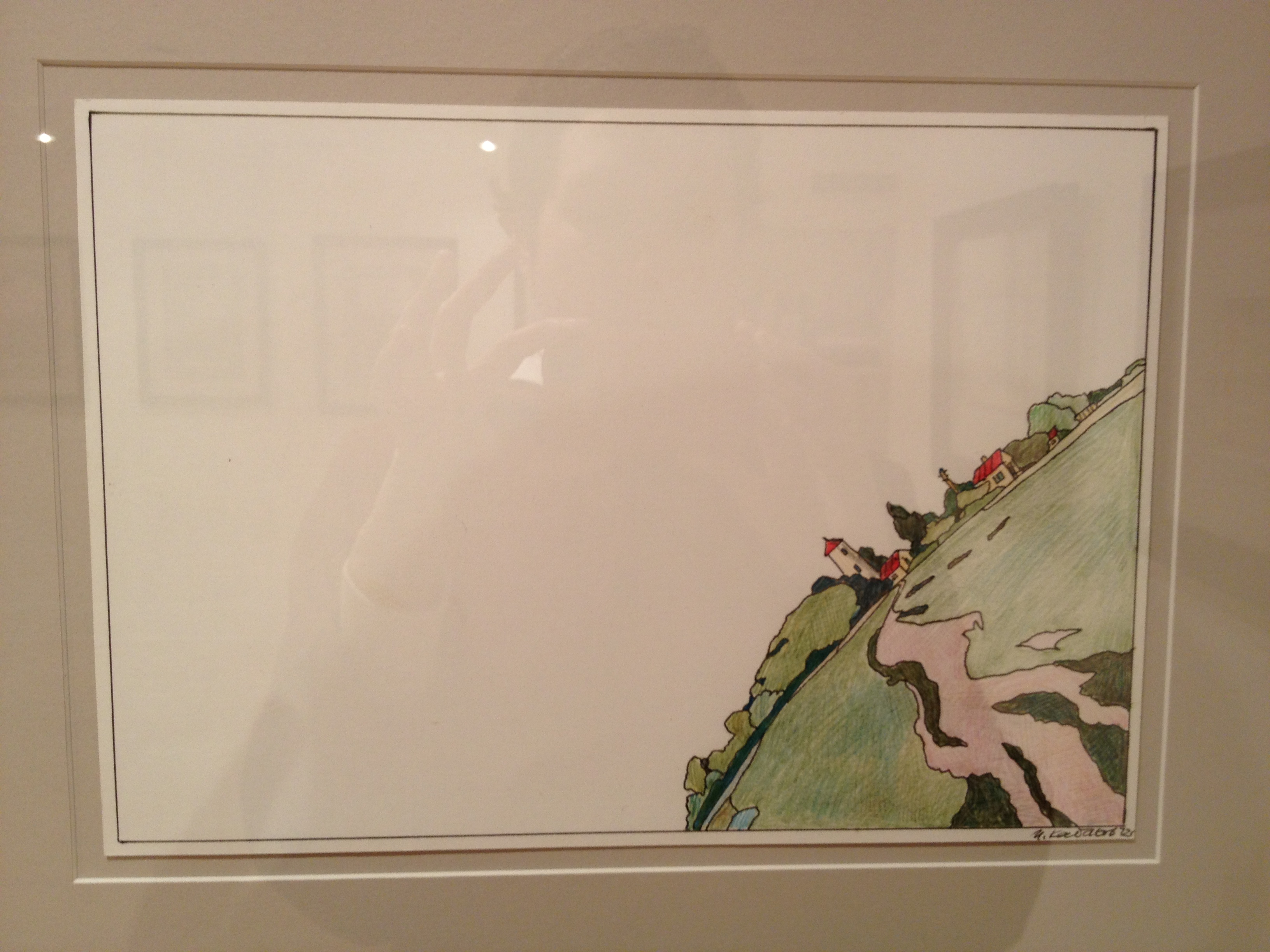 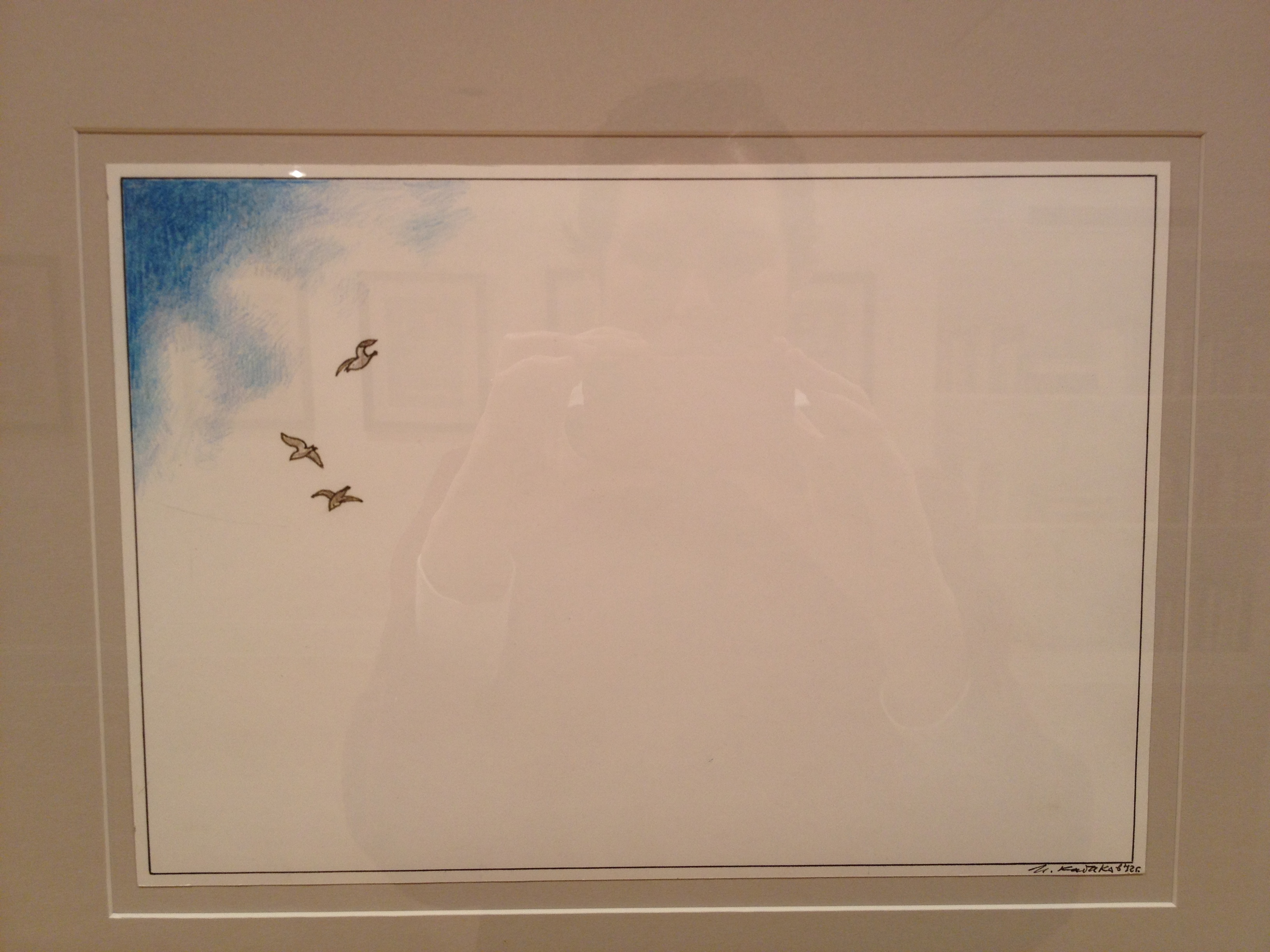 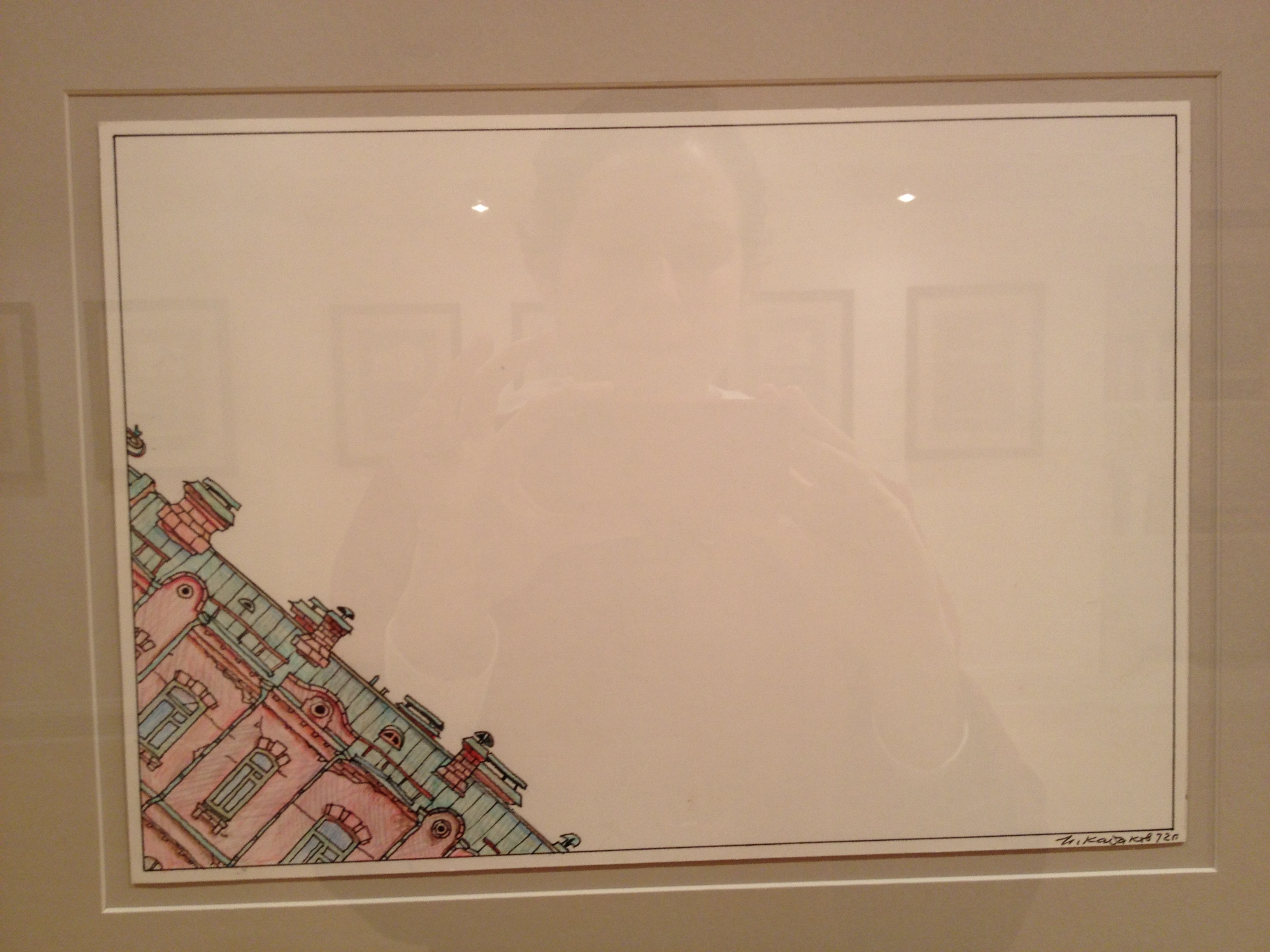