I had the pleasure of responding to Miriam Ticktin’s November 11 presentation, “The Politics of Sorting at Border Walls,” at the Graduate Institute for Design, Ethnography and Social Thought. I played Josh Begley’s Best of Luck With the Wall on the wall behind me while I shared the following comments:

Field of Vision – Best of Luck with the Wall from Field Of Vision on Vimeo.

In the few days that have passed since Miriam shared this moving and provocative essay with us, her research became exponentially more resonant and pressing. Our nation will soon be led by a man who regards borders as a central tool of foreign policy and defense, and as an emblem of national identity. A man who has certainly exploited many metaphorical “gaps in the fence” and policy loopholes to serve his own interests, now wants us to erect “impenetrable, physical, tall, powerful, beautiful” walls to bestow protection from invasive others (drugs, diseases, pests, weeds, migrants and their menacing ideologies), as well as confirmation for those of us inside the wall, that we belong there.

Despite their demonstrable deficiency and even counterproductivity, we keep building border walls: 15 rose in the last year alone. Legal scholar Mary Fan writes: “The more the prevention-through-deterrence paradigm has become strained by proof of its inefficacy, the more object-oriented it has become[, with] more layers of triple fencing, [and] more sophisticated military equipment.”[1] The piece Miriam shared with us today emphasizes this object-orientation. She investigates not only the objects and materials that compose those walls – her catalogue includes “electronic fence[s], iron, barbed wire and a lot of concrete” – but also the objects and subjects that pass through walls, and the way those subjects are made into objects.

Animate beings are objectified as they’re funneled through cattle chutes, scrutinized at inspection stations, stuffed through physical and bureaucratic holes. If they try to squeeze through but simply don’t fit, their bodies might end up lacerated or tangled in wire – immobilized in the wall itself, trapped in a perpetual jurisdictional purgatory. Or they might be stuffed into shipping containers and cells in detention centers, rendered into things – objects processed, stored, and circulated within a judicial-logistical system.

Both immigration and border control are in large part about logistics: about packing smartly, getting the right clearances, deploying resources efficiently, managing movement. And, as Miriam shows, logistical systems perform ontological and moral work. Their apparatae, like border walls and auxiliary technologies, she writes, “work through a form of politics that shifts… how we understand different kinds of beings… The design of the wall helps to determine which lives matter.” They sort out who is human, and what is killable and grieve-able. The wall and all the infrastructure surrounding it determine “whose (im)mobility is seen as morally legitimate.” In this, she echoes Deb Cowen, who, in her book The Deadly Life of Logistics, elaborates on the “profoundly political life of forms of knowledge and calculation that present themselves as purely technical.”[2] Logistics – whether orchestrating the movement of Shenzhen-born electronics or Aleppo-born babies – traverses “histories and geographies of conflict and violence,” as Cowen puts it.

In a handful of recent books on logistics, authors Jesse LeCavalier, Claire Lyster, and Ned Rossiter emphasize logistical systems’ predilection for perpetual circulation. That certainly doesn’t seem to be the case at the border. There, rather than lubricated distribution, we observe a lot of inefficient bottlenecks, and much stasis and regression: holding patterns, indefinite storage in warehouses and container camps, seemingly valueless goods in seemingly senseless movement from one storage facility to another. Maybe even recalls and deportation.

The logics driving this system are based on what appears to be a rudimentary operation: sorting. Certain national subjects here; all others, over there. Piles of desirable goods here, other piles there. The wall operationalizes this sort through its various architectural features: its bollards, gates, fences, and windows, its human cattle chutes and animal openings. The wall sanctions the passage of those things that happen to fit through its gaps. Like on a conveyor belt at a shipping distribution center, the gap effects the sort.

Miriam notes that the animal openings on the U.S. / Mexico border fence are 8.5 x 11” inches – the size of a sheet of paper. This, to me, is more than a coincidence. The dimensions of that gap remind us that much of the border’s sorting apparatus isn’t made of iron, barbed wire, and concrete. It’s also built out of bureaucracy: passports, paperwork, and protocols; forms and files, databases and algorithms. These, too, are based on the logic of the sort – although that logic isn’t always humanly intelligible. Here, humane and inhumane decisions can be driven by inhuman, automated, protocols. Security cameras, drones, and satellites reduce bodies to machine-readable pixel patterns. Sensors recognize bodies not as souls, but as heat sources and reflective surfaces.

According to Josh Begley, who produced the video we’ve been watching, even the border itself is “performed” through technology and data collection. As he writes, “Customs and Border Protection deploys radar blimps, drones, fixed-wing aircraft, helicopters, seismic sensors, ground radar, face recognition software, license-plate readers, and high-definition infrared video cameras, [which …] all feed data back into something called ‘The Big Pipe,’” a surveillance network developed by Border Protection’s Office of Air and Marine.[3] That “Pipe” is the border’s “epistemic plumbing,” and through it flow “electronic manifests, lists of travelers’ names, dates of entry, and untold terabyes of video footage” that help the border control agents, and their machinic agents, sort out facts on the ground.

This assemblage of “seeing machines” reminds us that the border is a geography, too. Aerial imagery shows us that, in some places, the border sorts out urban conditions and populations; it divides prosperous, idyllic communities from desolate, crime-plagued cities. In other places, the border stands as a seemingly arbitrary divide between two connected communities, their people sorted only by national identity. In still other places, the border functions almost as land art amidst an endless expanse of barren terrain. In those cases, the border wall performs another sorting function: it tests the stamina and strength of those who travel inconceivably long distances under inconceivably harsh conditions in the hopes of crossing its threshold, of being “sorted” into a new caste, a new life. 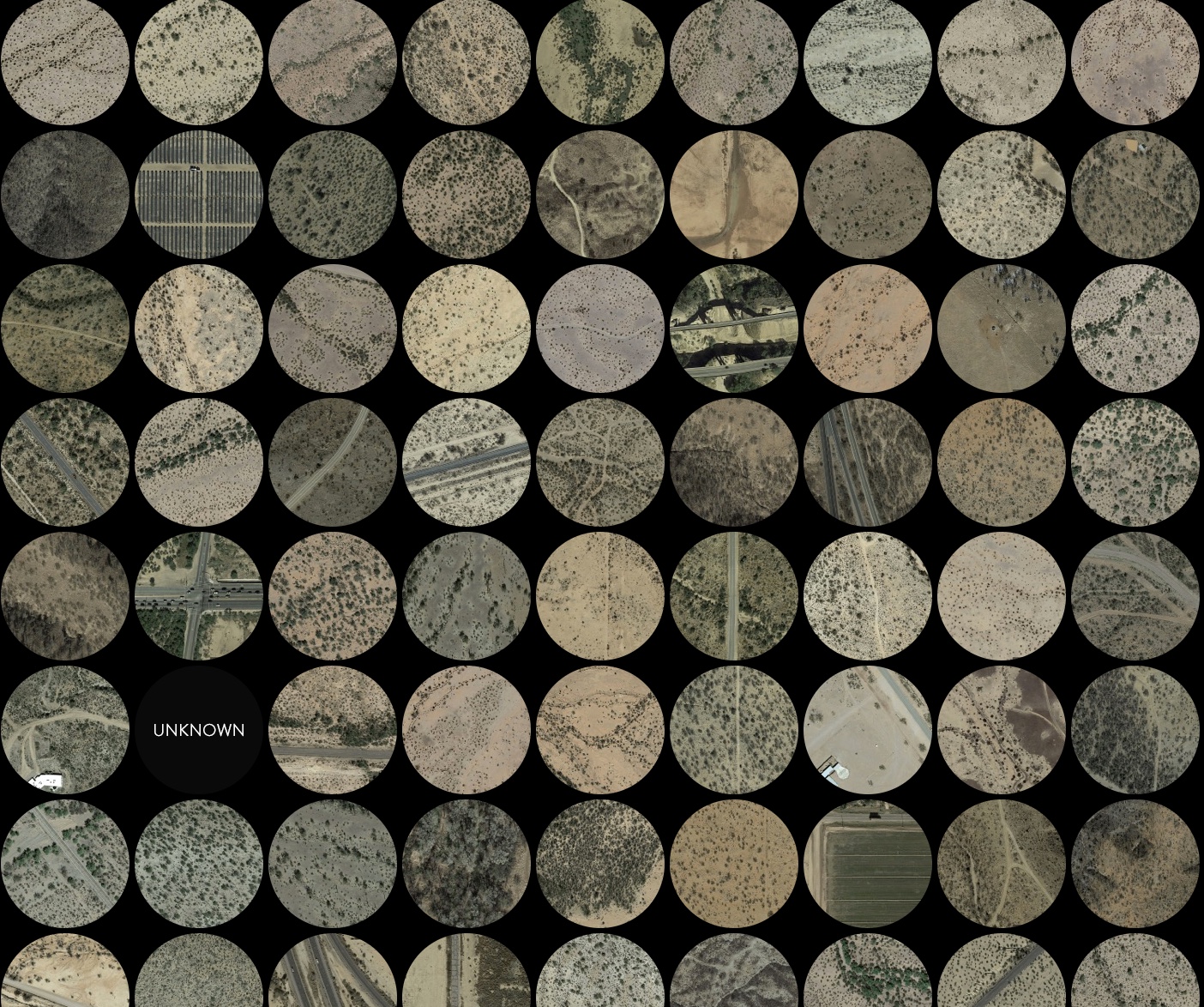 Some don’t make it. In counter-forensic fashion (à la Allan Sekula), Begley harnesses those same technologies of surveillance and objectification to restore the victims’ subjectivity and humanity. In his Fatal Migrations project, he extracts and immortalizes the little plots of ground where people died while trying to cross the border, thus connecting their biographies to geographies. And artist Josh Stobbe, in his “The Things They Carried,” embellishes those biographies by depicting the objects those subjects carried as they made their fatal trek. Those things – from water jugs and asthma inhalers to rosaries and cassette tapes – often help medical examiners and human rights workers sort through, and identify, human remains. These humble things, many of which likely began their own journeys aboard a container ship, paradoxically end up rehumanizing those who died carrying them. 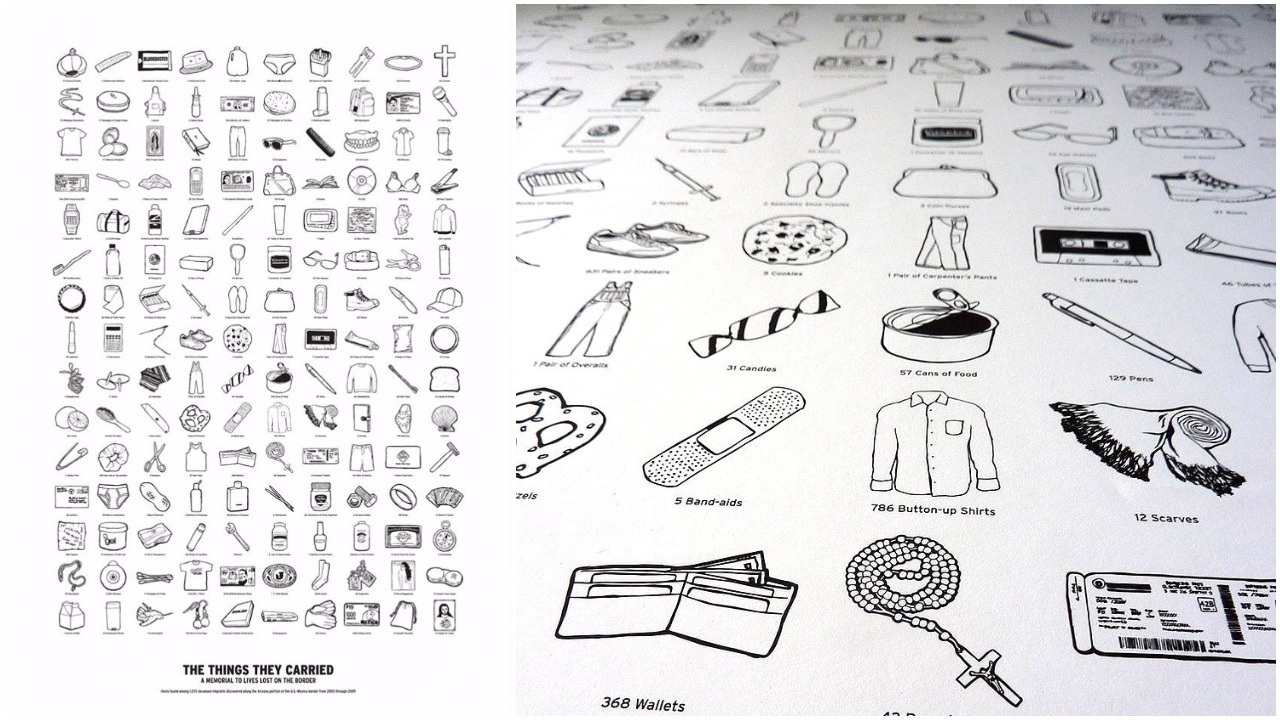