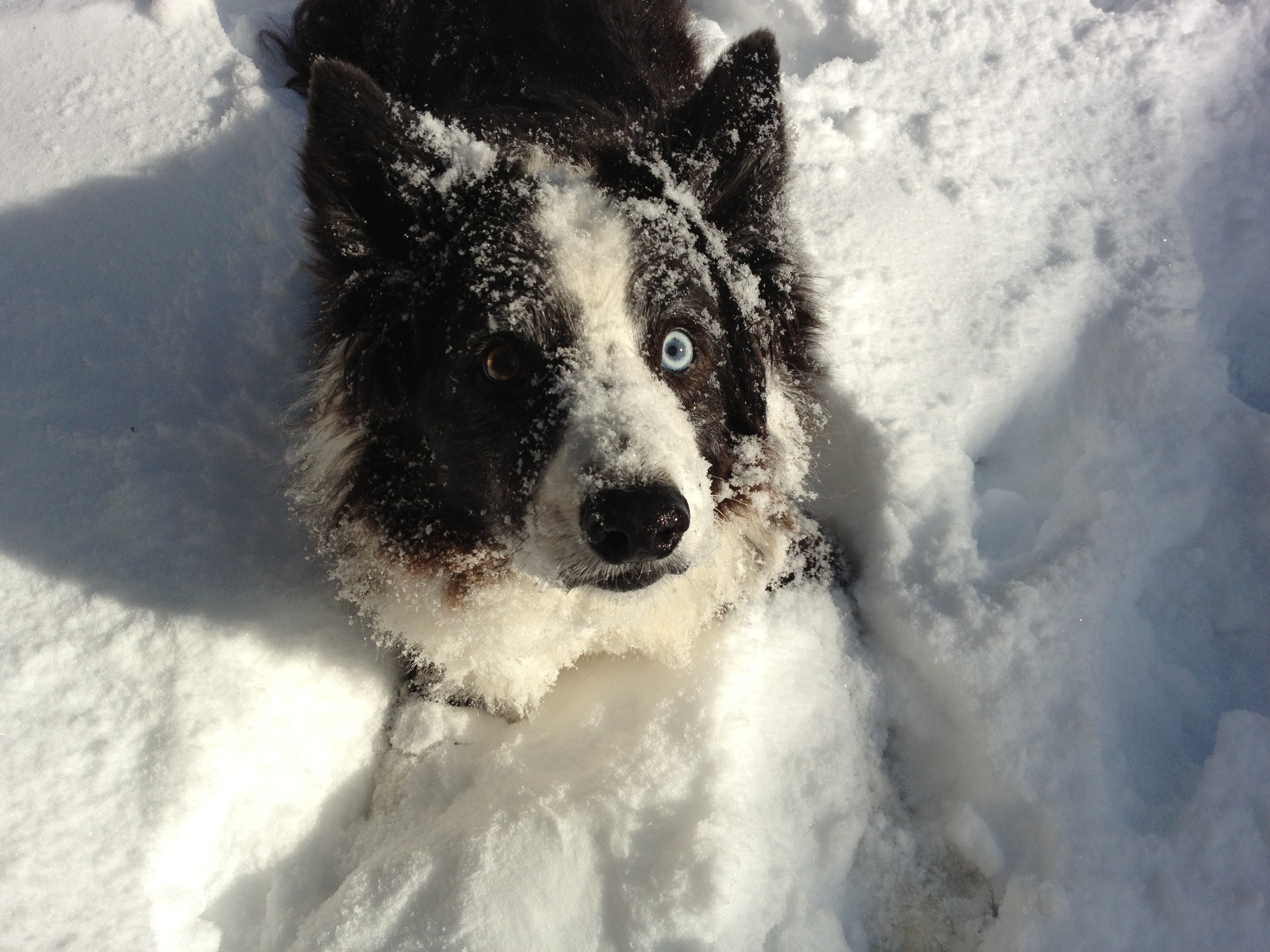 I’ve been here in Germany, on a fellowship, for the past few weeks. The people here are lovely, and the fellowship itself is a tremendous gift — but it’s a bit lonely in this small town. I’ve joked with my family that I should inquire about renting a dog.

Tonight, after a long series of cold, grey days, I looked out the window and saw a beautiful sunset — the first I’ve seen since I arrived. Shortly afterward I received a call from my dad: Dugan, the last of our Three Canine Amigos, had suffered some grave and sudden neurological damage and would have to be put to rest. He passed away at 3:45pm EST. He would join Rudy, who left us last October, and Roxy, who departed very unexpectedly this past July. Three great friends gone in 15 months. That’s a lot of loss. 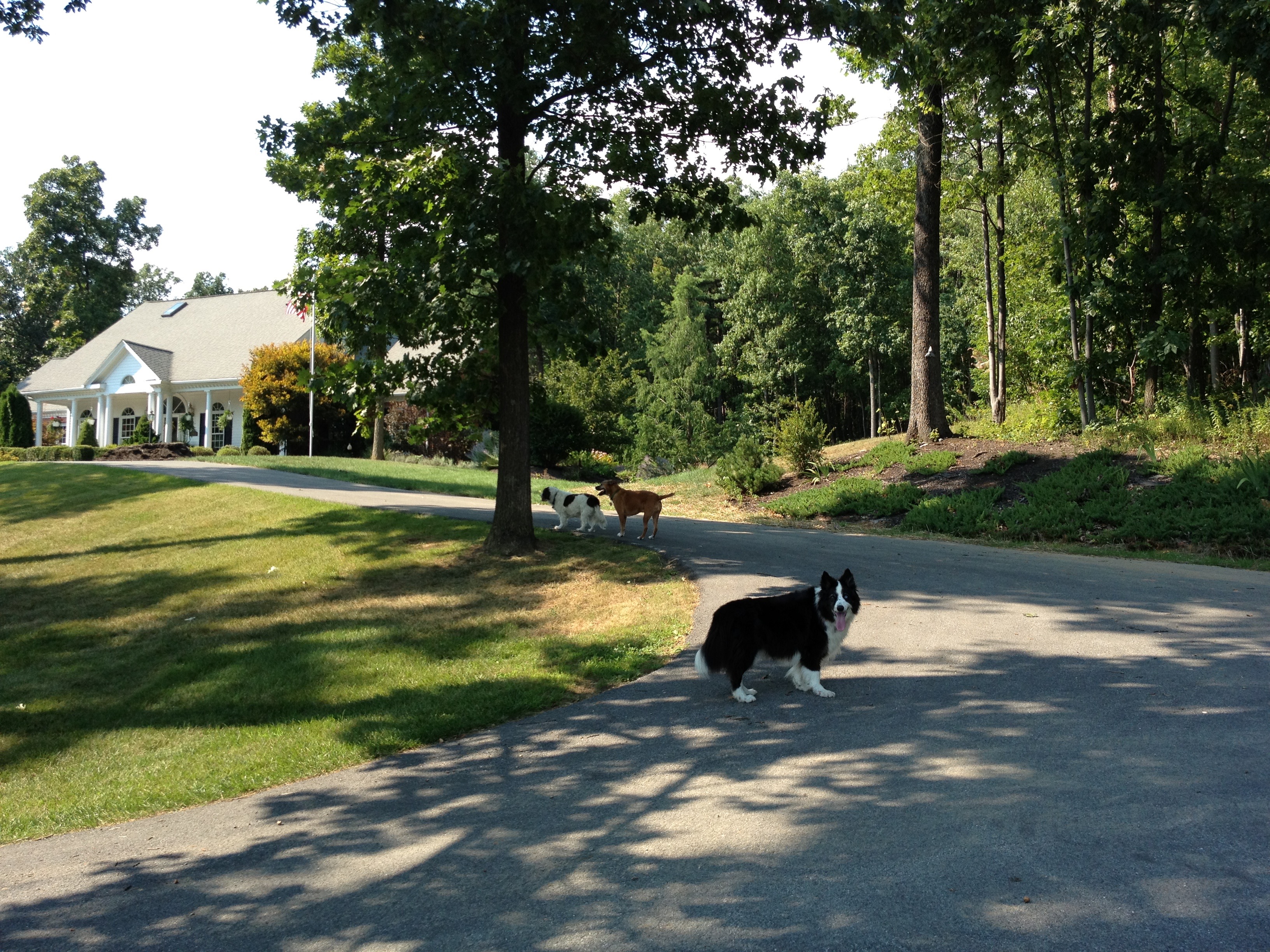 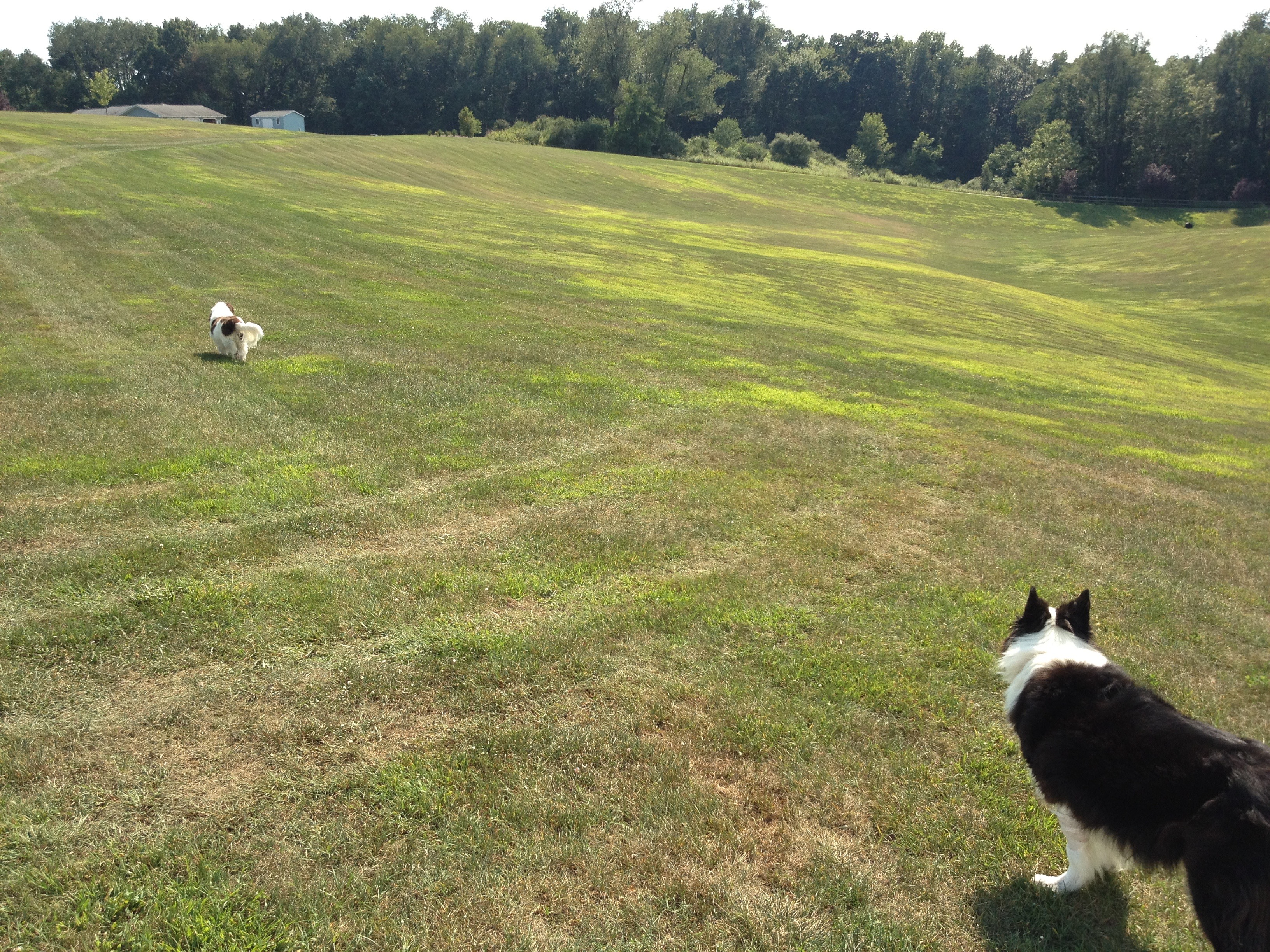 Dugan was the only dog to whom I wasn’t able to say goodbye in-person, and I’m quite distraught that I wasn’t there to kiss him one last time. But he’s always responded to my voice over the phone, so I FaceTimed him at the vet’s (this probably sounds so ridiculous to any non-dog people) and told him how much we love him, and how grateful we are that he gave us 15 wonderful years of his life. Fifteen years is an exceptionally long life for a border collie.

Dugan was the least rambunctious one in a litter of eight-week-old puppies at the farm in Youngstown, Ohio. We drove out to get him in the midst of a severe snowstorm shortly after Christmas in 2000, and I held him in my lap for the duration of our four-hour drive back to Central PA. From then on, every time I came home from New York, he’d always come upstairs and sleep beside my bed (he was the only of our three dogs who preferred not to jump on the furniture; he opted for the cold, hard floor — ideally somewhere “cave-like,” where he could bury his head under a table or bed frame). My mom told me that each time I went back to New York, Dugan would still climb those stairs for another night or two before realizing that I wasn’t there. That mental image always brought a tear to my eye. 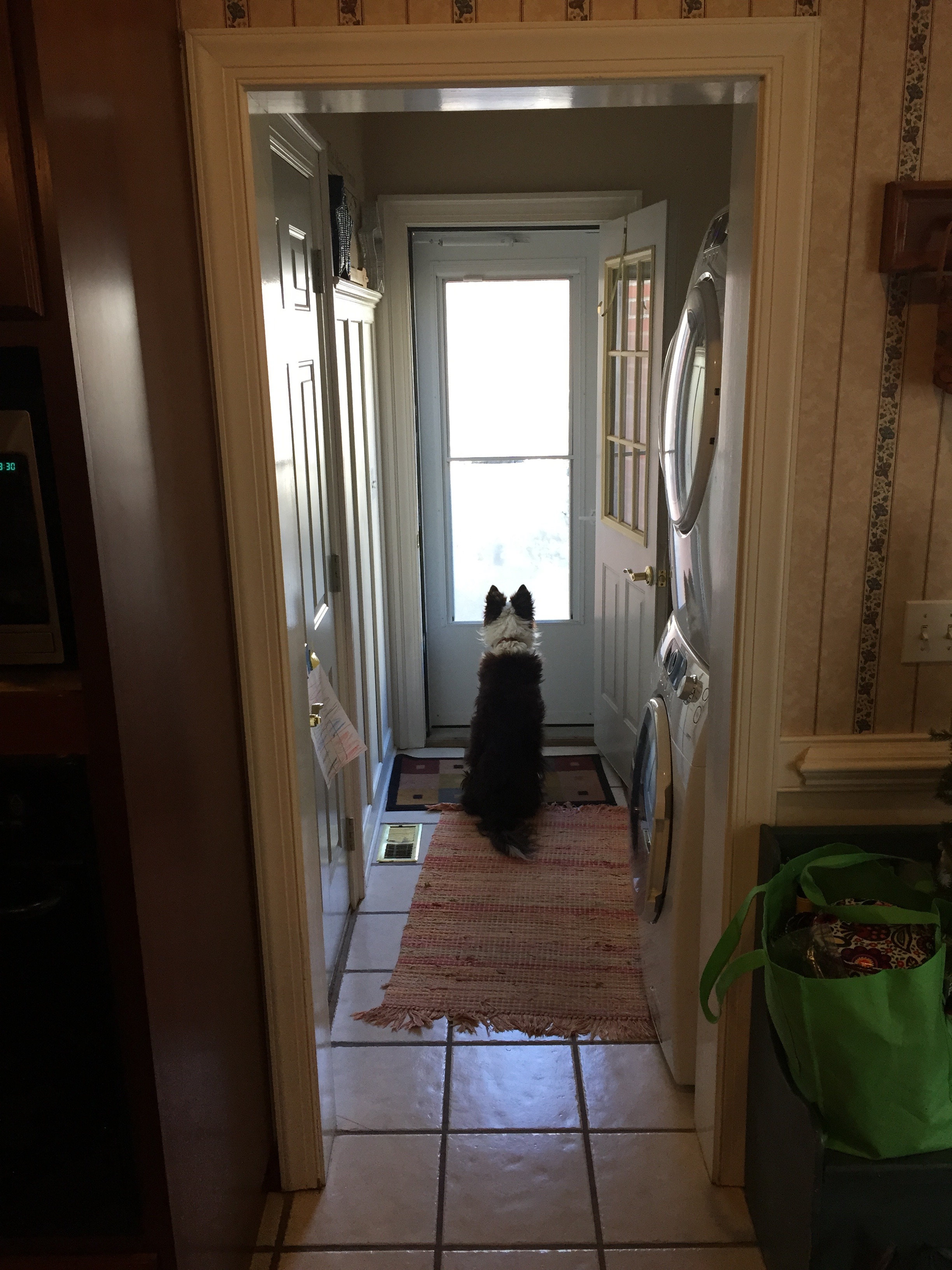 Dugan was a bit less emotive than our other dogs; he wasn’t as sappy or excitable or susceptible to getting his feelings hurt. He instead channeled all of his affective capacity — all of his corporeal being — into two extreme settings: full-on intensity, or out-like-a-light. The “intense” setting reflected his hard-wired working-dog inclinations. Dugan essentially had one mission: catching any brightly colored projectile. He’d be happy playing soccer or frisbee from sun-up to sun-down (and then some); we actually had to enforce rests every once in a while so he wouldn’t wear himself out. 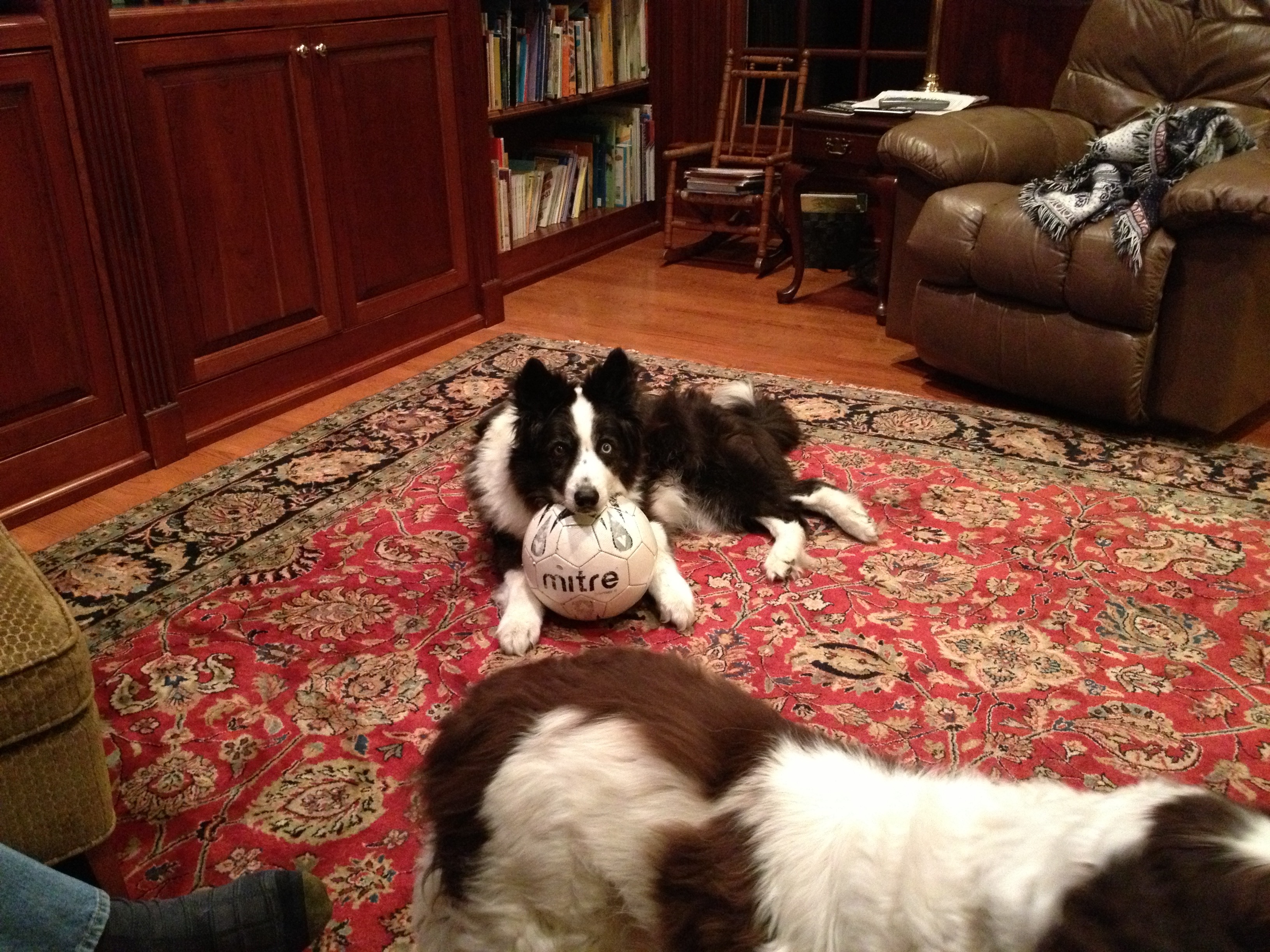 Okay, that’s not entirely true: he had a neutral in-between setting, too — but that was merely an “intermission” mode during which he waited for the games to resume. During those hiatuses, he’d sit for hours in the grass off the back porch — even better if it were covered with a couple feet of snow — or amidst the bushes beside my dad’s workshop (yet another of his “caves”).

Other manifestations of that intensity were a tendency toward adventurous eating and an imperviousness to pain. He liked all kinds of vegetables, had quite a taste for ice, and dined on a range of stuffed animals (Poly-Fil was his great weaknesses), which necessitated several abdominal surgeries. The constant activity also caused a few snapped tendons, from which he snapped back as quickly as possible, so as to resume his rigorous training regimen. Those handicaps were never a hindrance; if we couldn’t run outside, we ran drills in the living room.

And that’s not all: he showed signs of epilepsy within his first year; a daily pill helped to keep that under control. And then he got — and beat — cancer. He always bounced back; just last week the vet told my dad that his blood work was perfect. So, despite the fact that a good quarter of his 15 years was spent either in a cast or stitches (or with some part of his body shaved and stained from surgery), he packed more steps, heartbeats, and thrills into his 11 Prime years than the Laws of Space-Time would seem to allow. 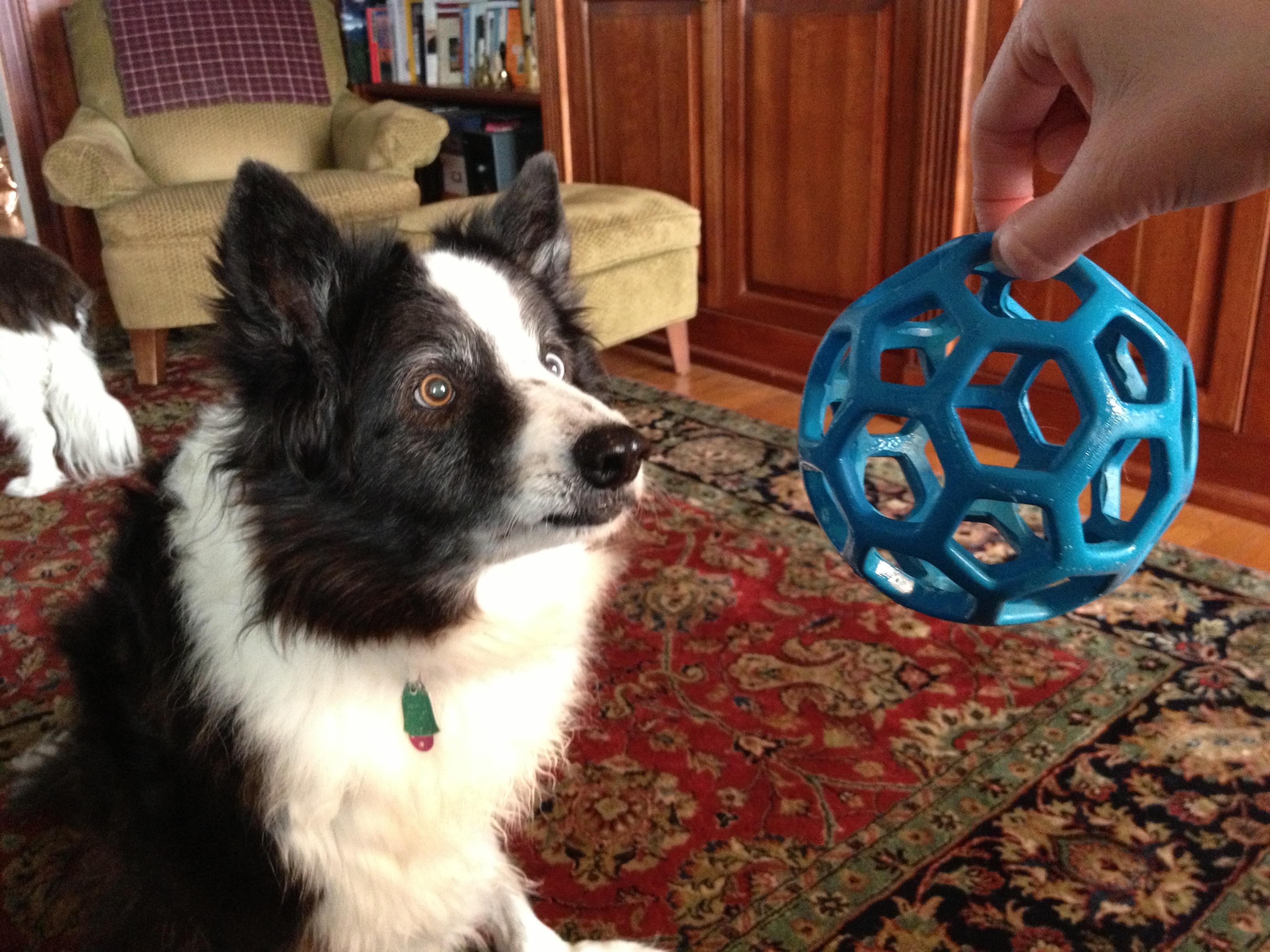 The flip-side of all that Extreme Awakeness: sleep. He did that with all-out intensity — and some athletic grace — too. 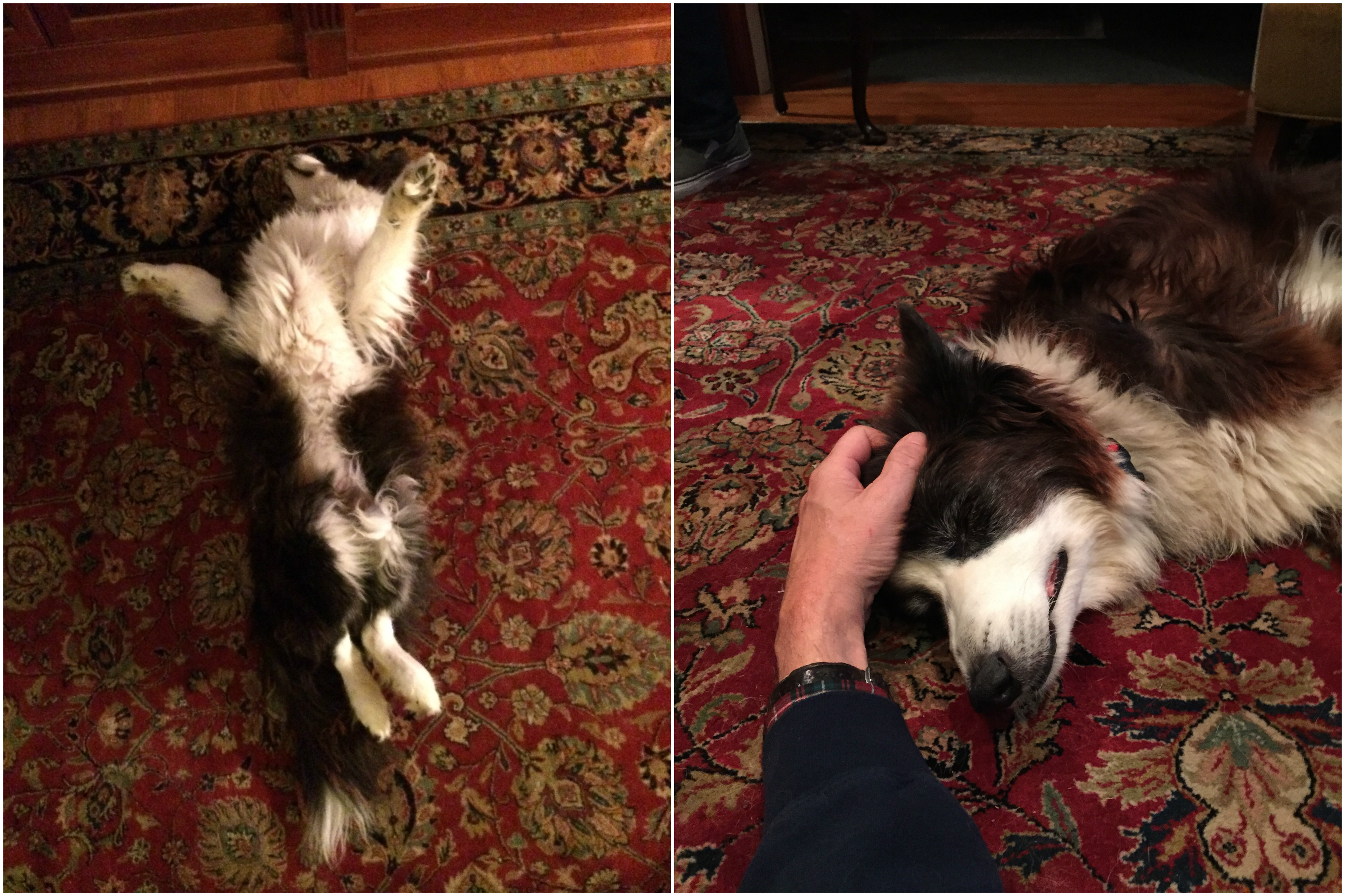 My brother and I always joked that if Dugan had a human personality, he’d be a jovial, lovable jock. I imagine that if he ever had to write a personals ad, he’s say that he liked hitting the gym, car rides, and good conversation (Dug had quite an extensive vocabulary and a tendency toward garrulousness). He’d probably also mention his striking heterochromia — one crystal blue eye, and one deep brown — and his increasingly chameleonic coloring: as he aged, his stark black-and-white coloring softened with a bit of amber, a long-hibernating genetic gift from his mother. 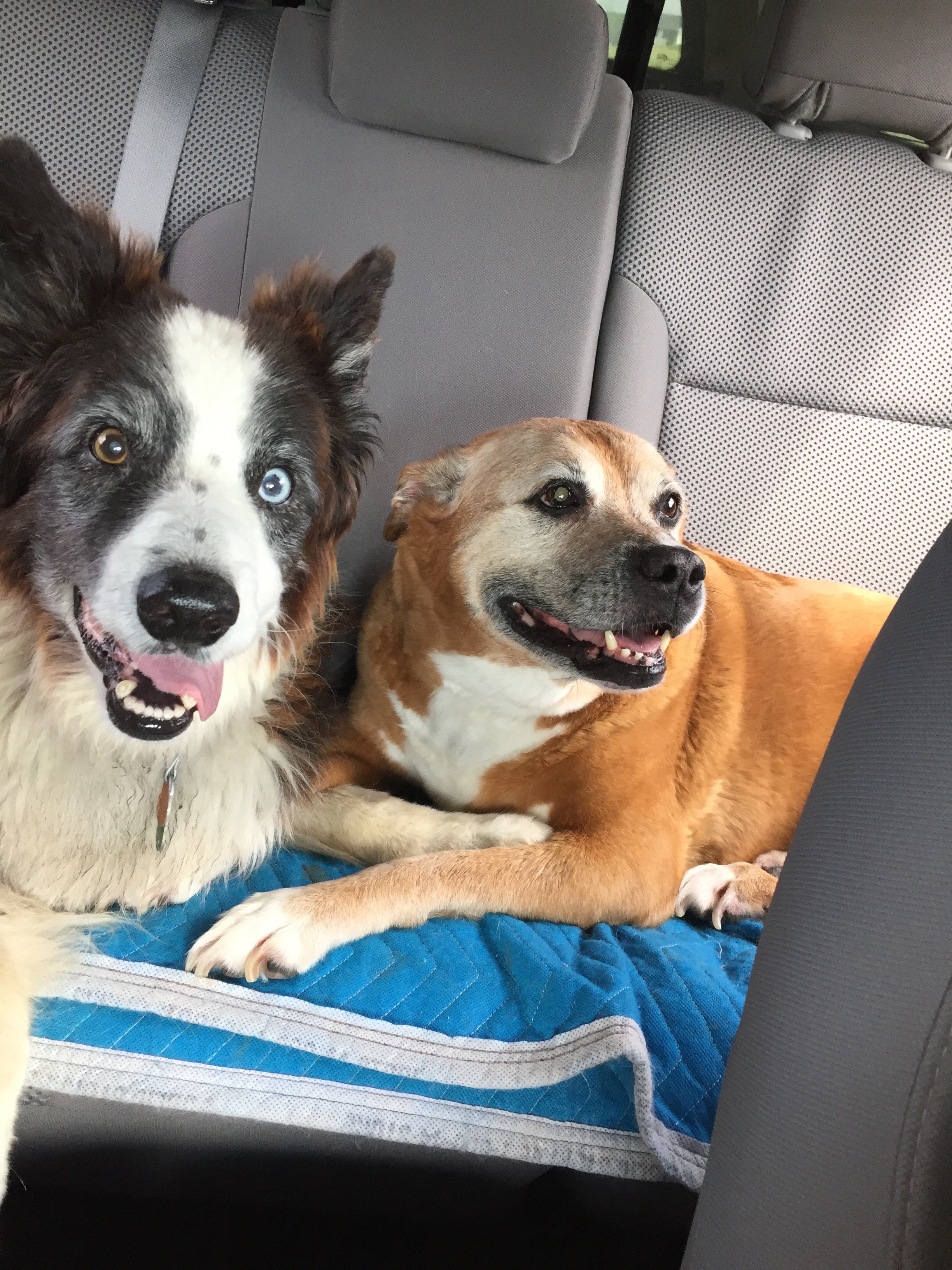 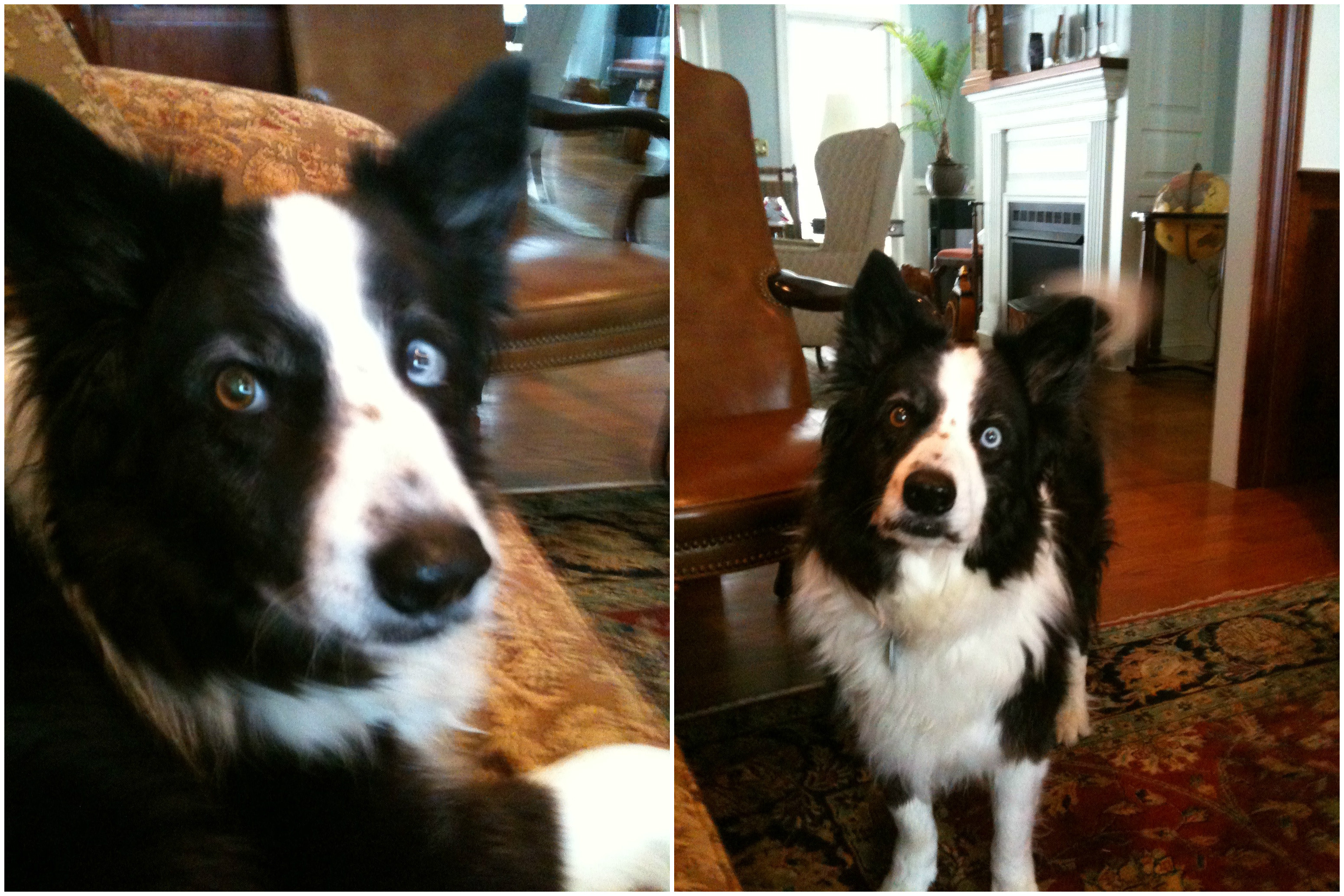 Dugan had a tough shell, but he showed tenderness in his own way. He reserved the hand licks and moments of stillness for special occasions — so when they happened, you knew you earned it. And you knew he meant it.

We were fortunate to live with a force of nature — a dog that lived longer and harder than any dog should or could. With his departure we lose a seemingly inexhaustible source of kinetic energy, a verve and jouissance, that seems to create a little hole in the physical universe.

And as I said to Rudy 15 months ago and Roxy six months ago (and Dexter and Opie before that): Goodbye, my buddy. Thank you for all the love and joy and vibrancy you brought into our lives. We’ll miss you terribly, and we’ll love you forever.

13 replies on “Goodbye, Old Friend, and Thanks for All the Frisbees”

I am so sorry…and sad! Until you meet again…

Such sad news to recieve when you are away. You’re in my thoughts!

Thank you, Madeline! I wish I could’ve been there.

Three difficult losses in fifteen months — almost too much to bear. I’m so sorry for you and your family, Shannon. Dugan was strong through each previous loss and has kept going as long as possible for all of you. You have many special memories and I have empathy for the sadness you’re feeling now.

Thank you very much, Marti.

God be with you in your time of sorrow and pain. To loose three dogs and that short amount would be devastating(sp). But, as i said they will all be greeting you at Rainbow Bridge happy and healthy. Also, God received not one but, three fur angels that will always be watching over you and your family. ;(

Thank you, Susan! I appreciate your kind words!

Beautiful tribute, Shannon. I feel like I knew him!

Oh Shannon. He sounds just wonderful. I wish him safe passage and a good reuniting with his other amigos.

Oh, thanks so much, Molly. I really appreciate your kind words (if I remember correctly, you’re a dog person, too — so I’m sure you know how it is 🙂

I hope you’re doing well, and I hope our paths cross sometime soon!

Hello Shannon,
Hi, you don’t know me but your Dad attached this post to an email to me. I am the puppy Mom to Elliott and Duncan.
What a wonderful tribute to Dugan. He must have been a wonderful dog. He may have left some tremendous paw prints for the new guys to fill. My hopes are that they do fill them but not replace them and give as much enjoyment and love as possible.
As I read your post their is a strange sense of fate that your family has crossed a path with me. I am originally from outside of Youngstown, Ohio and my daughter has a masters degree in German translation and has had an internship in Germany.
Best regards,

Thank you so much for writing Lori. Yes, Dugan certainly was one-of-a-kind — and I’m sure Elliott and Duncan are, too. You can rest assured that they’ll be well cared for and deeply loved. I can’t want to come home to meet them! -Shannon