We’ve wrapped up the inaugural semester of my “Maps as Media” course, a reincarnation of my old “Urban Media Archaeology” studio (minus the explicit focus on urban infrastructure and the collaborative effort to build our own open-source mapping platform). We began the semester by looking at new challenges and opportunities in map-making, and framing those “new” ideas in relation to the history of cartography. Then we investigated what it would mean to study maps as media, and we considered various tools and frameworks for critical cartographic analysis. After that, we discussed cartographic epistemologies and the significance of borders, gaps, and blind spots. We talked about cognitive mapping, critical cartography and counter-mapping, indigenous mapping and alternative spatial ontologies. Then we explored various digital mapping platforms — from arcGIS to Mapbox to CartoDB — and considered the techno-cartographic gaze and satellite imagery, then contrasted and supplemented these data-driven methods with approaches to multimodal, “deep,” sensory, and affective mapping.  We closed out the semester by examining the mapping arts — visual, sound, and performing artists who engage with maps — and the temporality of maps.

Throughout the semester, we all shared lots of map critiques. We took some trips, too: to the NYPL Maps Division, the new Bushwick home of CartoDB, and to a lecture by visiting information architect Dietmar Offenhuber. And we hosted some guests: historian-cartographer Bill Rankin, technologistPeter Richardson from Mapzen, artist Nina Katchadourian, artist-architect Gabi Schillig and her students from the Peter Behrens School of Arts / Düsseldorf University of Applied Science at the Faculty for Design, and the NYPL Labs’ Space/Time Directory team.

We enjoyed a great mix of participants from Media Studies, Parsons’ Urban Ecologies program, and NSSR’s Liberal Studies. Over the course of the semester, the students were charged with creating “atlases” of maps pertaining to any spaces, times or topics of interest. I was really happy to see that many students chose to use their maps to pilot-test ideas for their thesis projects and to explore “back drawer” areas of creative and intellectual interest.

They did fantastic work. Here it is: 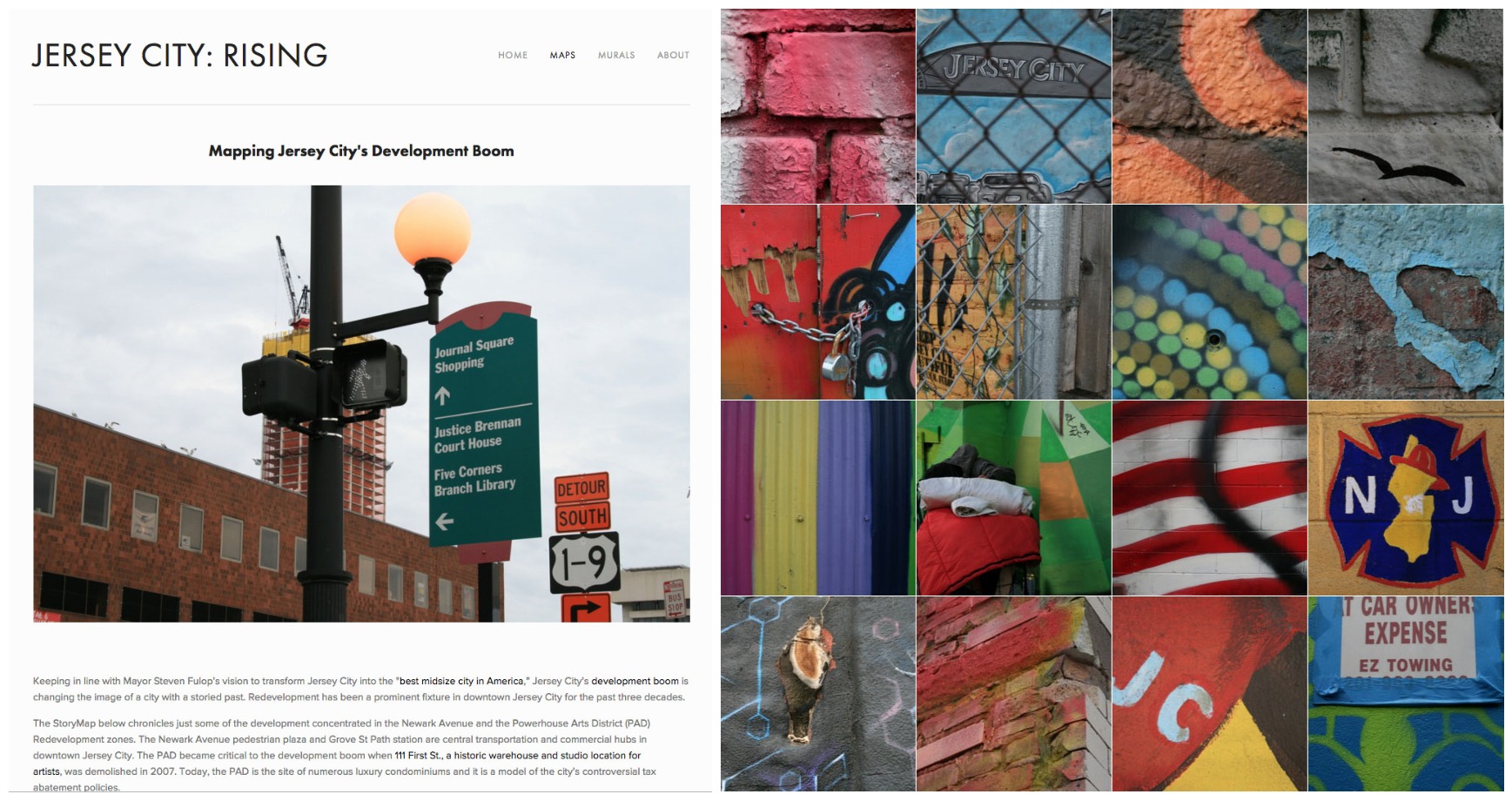 Joanna, who’s deeply involved in local politics in Jersey City, used maps to explore the city’s development and the various socioeconomic and cultural shifts that that development has generated. She also offers a look at the role of public art — specifically, murals — in marking and masking various sites of transition. 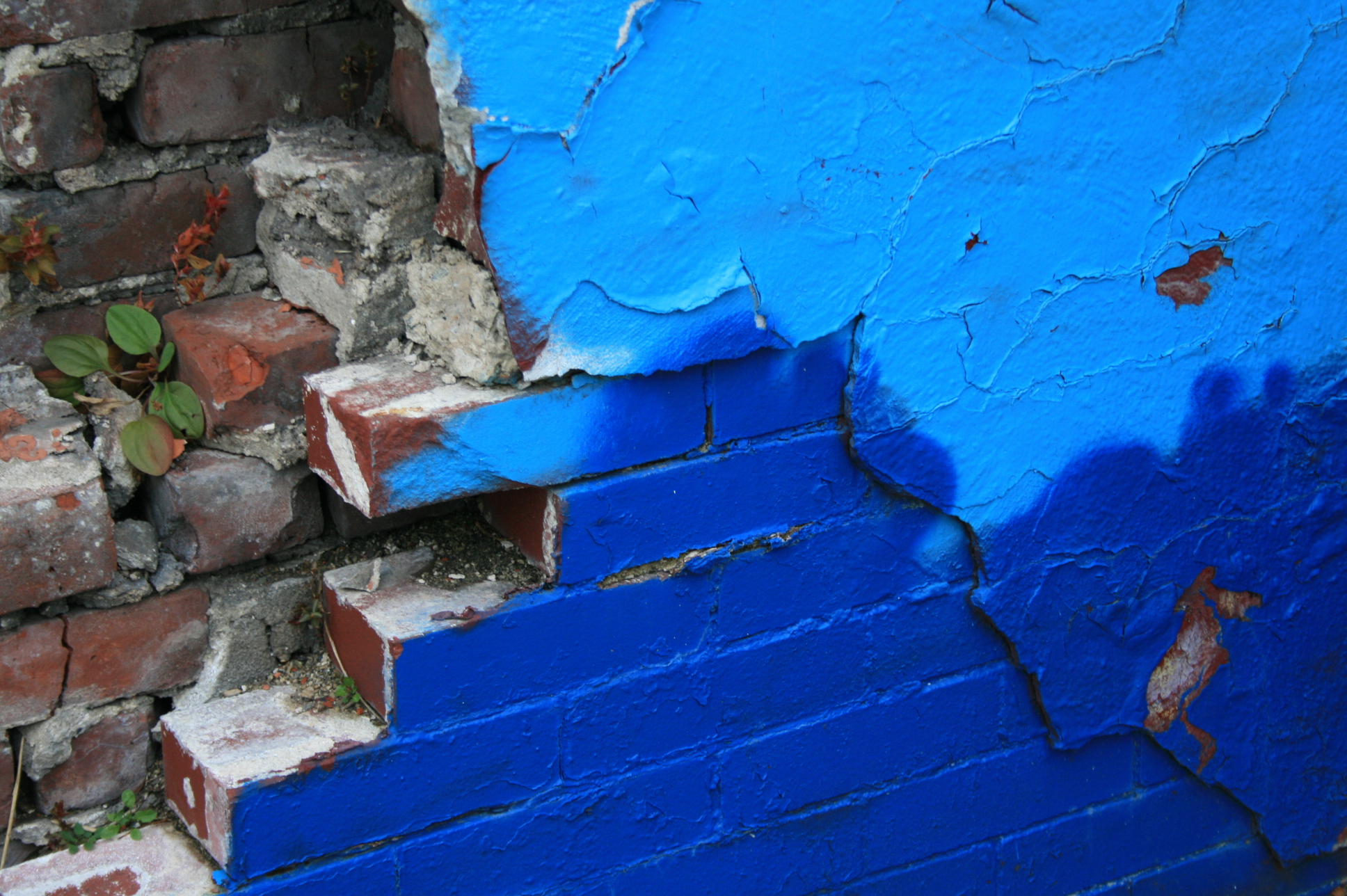 Kartik studied spatial politics in Sri Lanka — particularly its post-war urban configurations, and the country’s role as an important site of global investment and geopolitical negotiations. Among his many-layered maps are a “discourse map” of the myriad sources collectively determining what Sri Lanka is as a national imaginary; and a deep map documenting the razing and reconstruction of the Jaffna library, an central symbolic and political figure in recent uprisings. 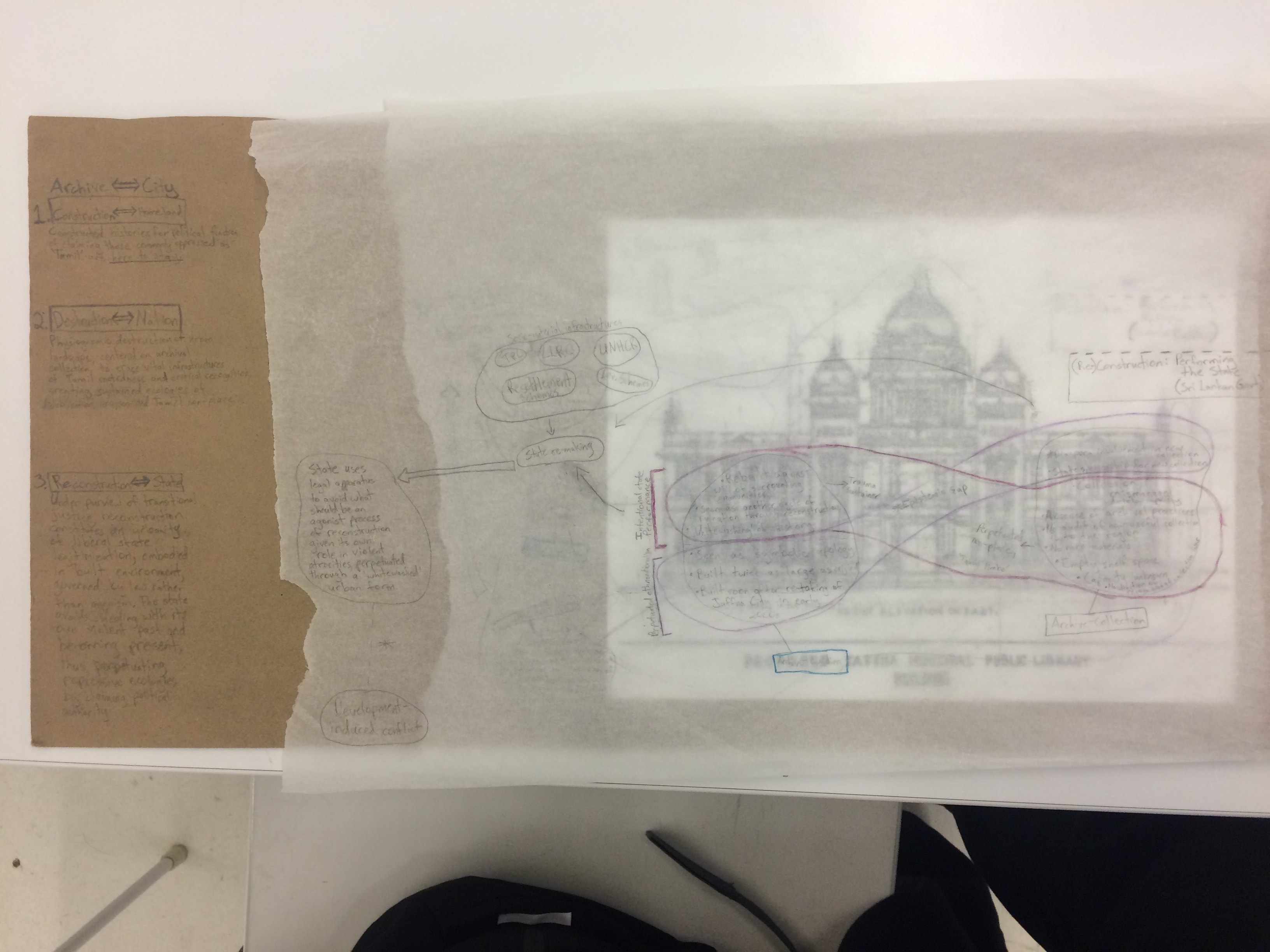 StreetmapNYC from Laura Salaberry on Vimeo. 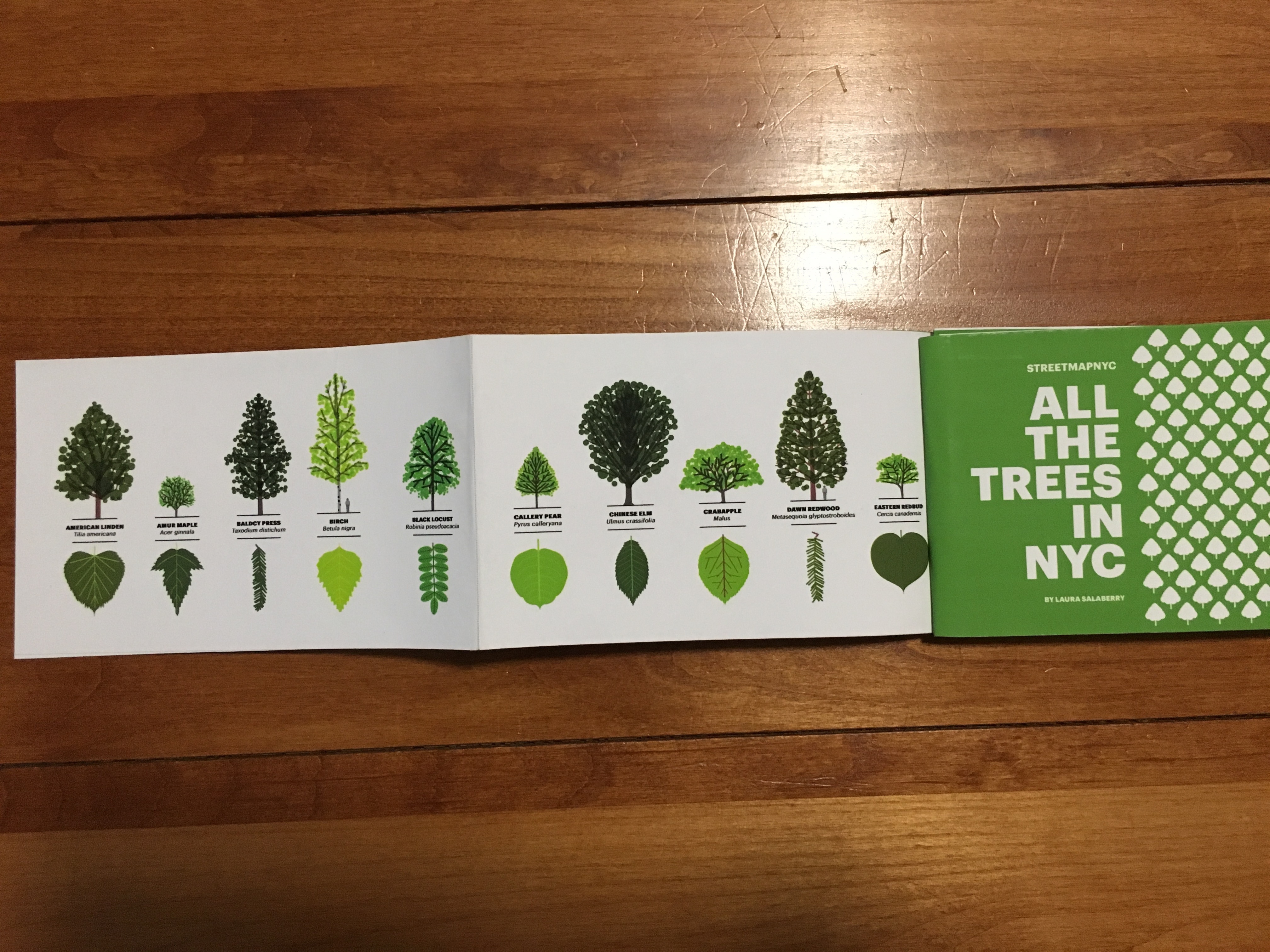 Livia followed a trail of people’s “favorite places” in New York. At each site, she documents — through audio, video, contemporary and historical photography, and hand-written notes — its distinctive characteristics. And before leaving, she finds someone to nominate his or her favorite place, thus leading Livia on to the next stop in her journey.

Nelesi mapped the body and examined bodies as cartographic metaphors. She experiments with means of mapping traces of the body’s presence in our environment; catalogues body-centric metaphors for orienting ourselves in the world; and offers a map of New York refashioned as a body with organs and a catalogue of the body as a landscape of parts, each representing a different temporality — of life, death, regeneration. 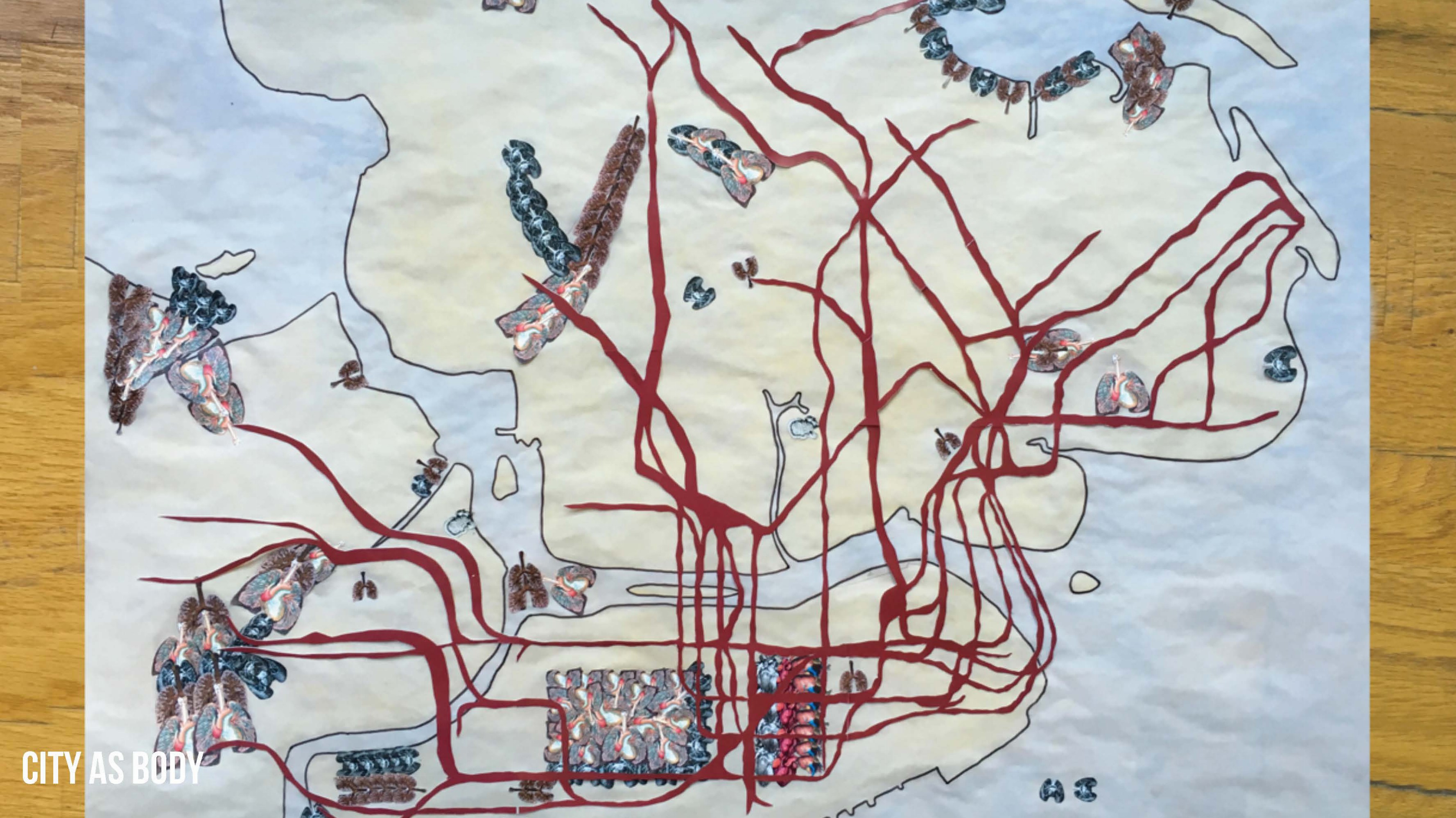 Rachael mapped our relationships with trash by documenting the trash generated by one person, and one family, over the course of a day or a week; by mapping our imagined landscapes of disposal; by tracing the lifespan of a plastic bag; and by materializing — in the form of a bureau — how we often “preserve” our e-waste in the deep recesses of our desk drawers, simply because we don’t know how to responsibly dispose of it!

Shibani mapped population displacement and neighborhood relocation in Mumbai. She used CartoDB to map flows of resettlement and relocation, and to relate those flows to nearby environmental concerns, including toxic industries and sites of infrastructural concentration. She then employed ethnographic research, participatory mapping, and illustration to map residents’ perceptions of their homes at the neighborhood and household scale. And she employed provocative methods and materials — a pin-hole viewer, yarn, etc. — to capture the various phenomenological and affective dimensions of “sense of place” that are often absent in traditional “development” cartography. 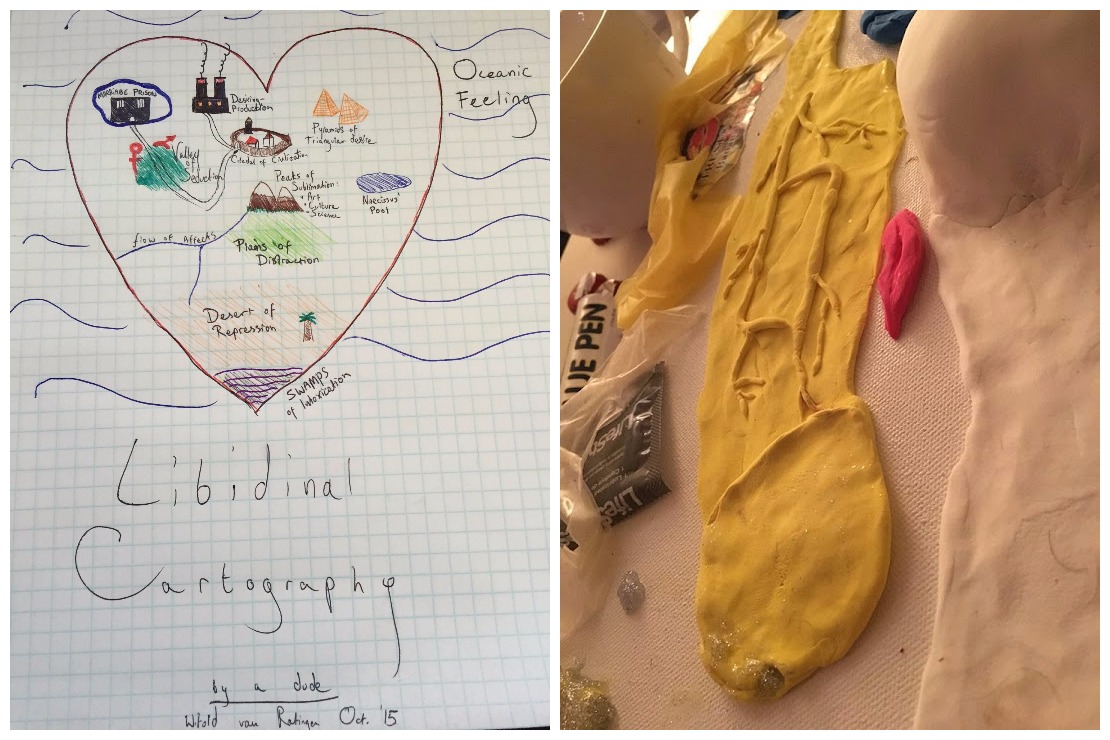 Witold offered a brilliant atlas of “libidinal cartographies.” He builds upon psychogeographic methodologies; I’ll allow him to explain:

The libidinal cartographer… has some shiny new tools in her kit, on account of half a century of theoretical work and technological advances. The experiential solipsism that the psychogeographers sought and failed to overcome has since been addressed by, among others, the work of Deleuze and Guattari. They allow the libidinal cartographer to move away from models of the discrete liberal subject and to substitute a vision of the subject plugged into the city as an assemblage or social machine, which continually produces and reproduces itself through circuits of desire and distributions of intensities. Approaching the city as this kind of communications infrastructure does not exactly salvage experiential intersubjectivity, but it allows the psychogeographer to embrace difference while continuing to look for opportunities to decode, deterritorialize, and destratify space on the molecular level. These operations may then modify the flows of (libidinal) intensities within the assemblage, perhaps opening up new lines of flight — that is to say, freeing places to be more than locales for capitalist modes of desiring-production. This post-structuralist re-framing, I propose, thus leaves intact the basic aim of psychogeography, while dispelling the problem of intersubjectivity that led the Situationists to abandon the project.

He offers a sketch-map of a libidinal landscape and documented of an electrophysiological experiment to map affective engagement with various sites along a walking route. Has atlas also contains a topographic sculpture of the city-as-body and a game-space map of Coney Island as a libidinal zone. 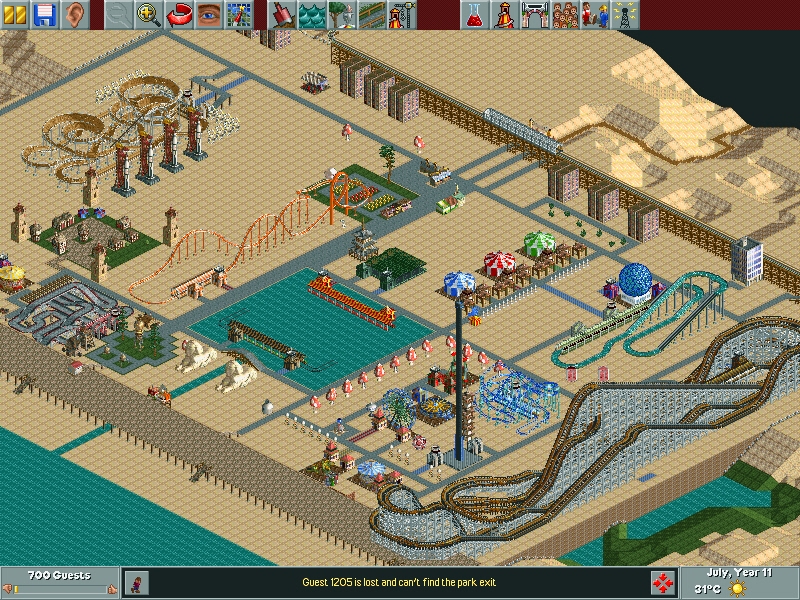 And finally, Zanny used maps to explore spatiopolitics in Ecuador — from the continental scale, down to the scale of an individual market in Quito, the site of her fieldwork. Each page of her atlas employs the same four scales of analysis, across four different subjectivities: citizens, explorers, “official” political actors, and tourists.