The galleries re-opened after their summer hibernation! Yippee! So, a few weeks ago, I saw a bunch of art — and, as usual, patterns emerged: maps, graphs, notations, diagrams, flows, waves.

First, Mishka Henner’s “Semi-Automatic” @ Bruce Silverstein: Henner aggregates data sets, images from mass media, and the stuff of the Internet. His best pieces mine Google Maps for examples of how the aerial view often reveals the accidentally sublime geometries of our man-made landscapes, and how those “objective” views are often convoluted by various commercial or security concerns.

Third, Sarah Sze at Tanya Bonakdar: Sze examines the materials, instruments, and conceptual techniques we employ to construct our senses of space — how we frame the fragments of an image (as we frequently do with composite satellite images) in order to grasp the “big picture,” how we rely on a limited set of visual tropes to understand our place within the cosmos, and how our desire for orientation translates across different scales.

While Sze played with the conceptual and material frames of imagery, Dan Flavin’s “Corners, Barriers and Corridors” at David Zwirner explored (as it always does) light as a means of delineating spatial and perceptual boundaries: 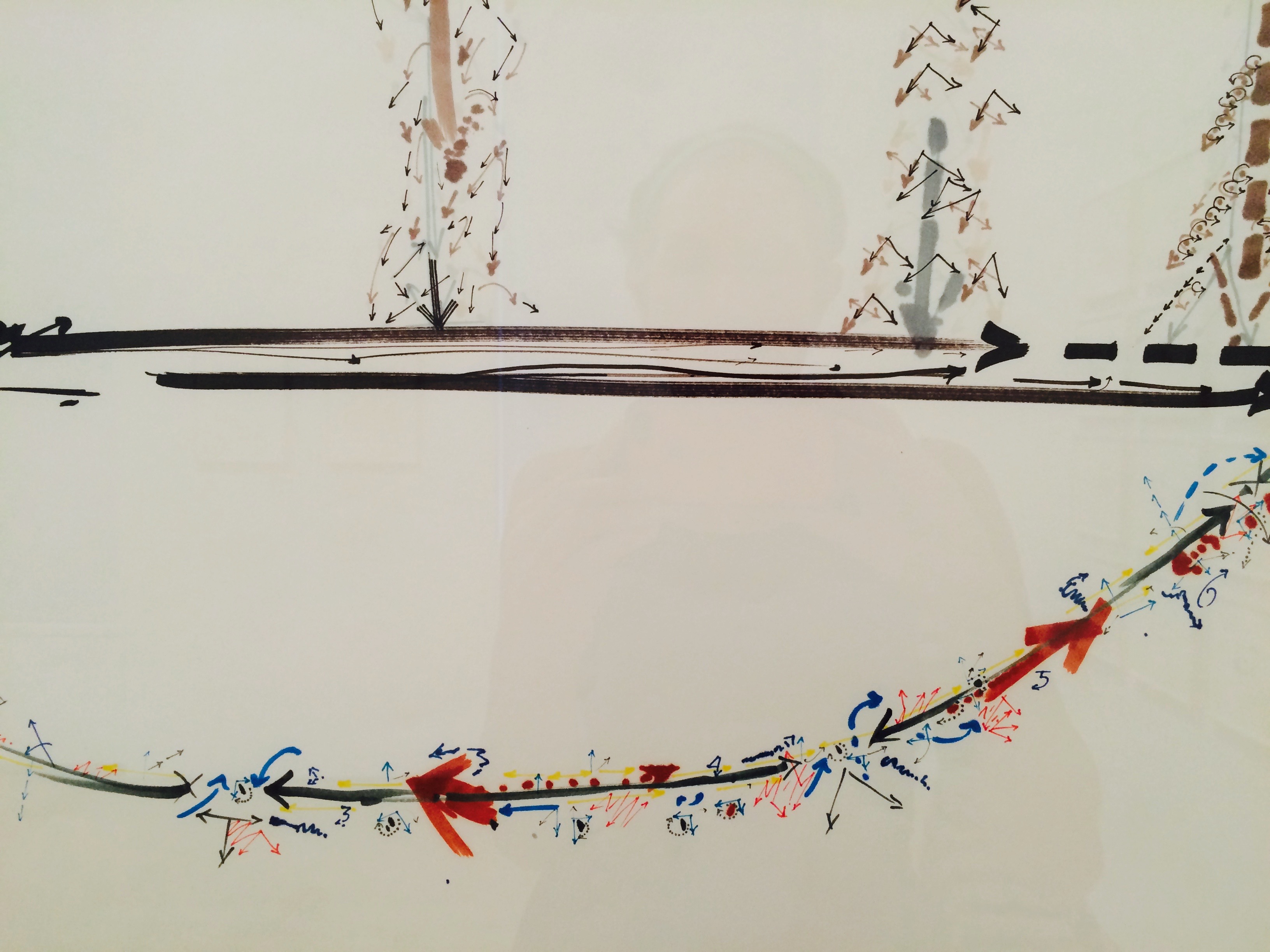 And speaking of notation: Paula Cooper featured Carl Andre, Robert Barry, Douglas Huebler, Joseph Kosuth, Sol LeWitt, Robert Morris, and Lawrence Weiner (all dudes!) in “The Xerox Book” — a show based on its namesake 1968 publication by Seth Siegelaub and Jack Wendler. Siegelaub, whose work partly inspired my 2011 article on experimental design publications, worked with the exhibition-as-book (or book-as-exhibition); for this particular project, each artist was invited to contribute 25 pages to the 8.5 x 11″ Xeroxed publication. As Siegelaub told Hans Ulrich Obrist in 1999,

The Xerox Book … was the first [projec]
where I proposed a series of ‘requirements’ for the project, concerning the use of a standard size paper and the amount of pages the ‘container’ within which the artist was asked to work. What I was trying to do was standardize the conditions of exhibition with the idea that the resulting differences in each artist’s project or work, would be precisely what the artist’s work was about. 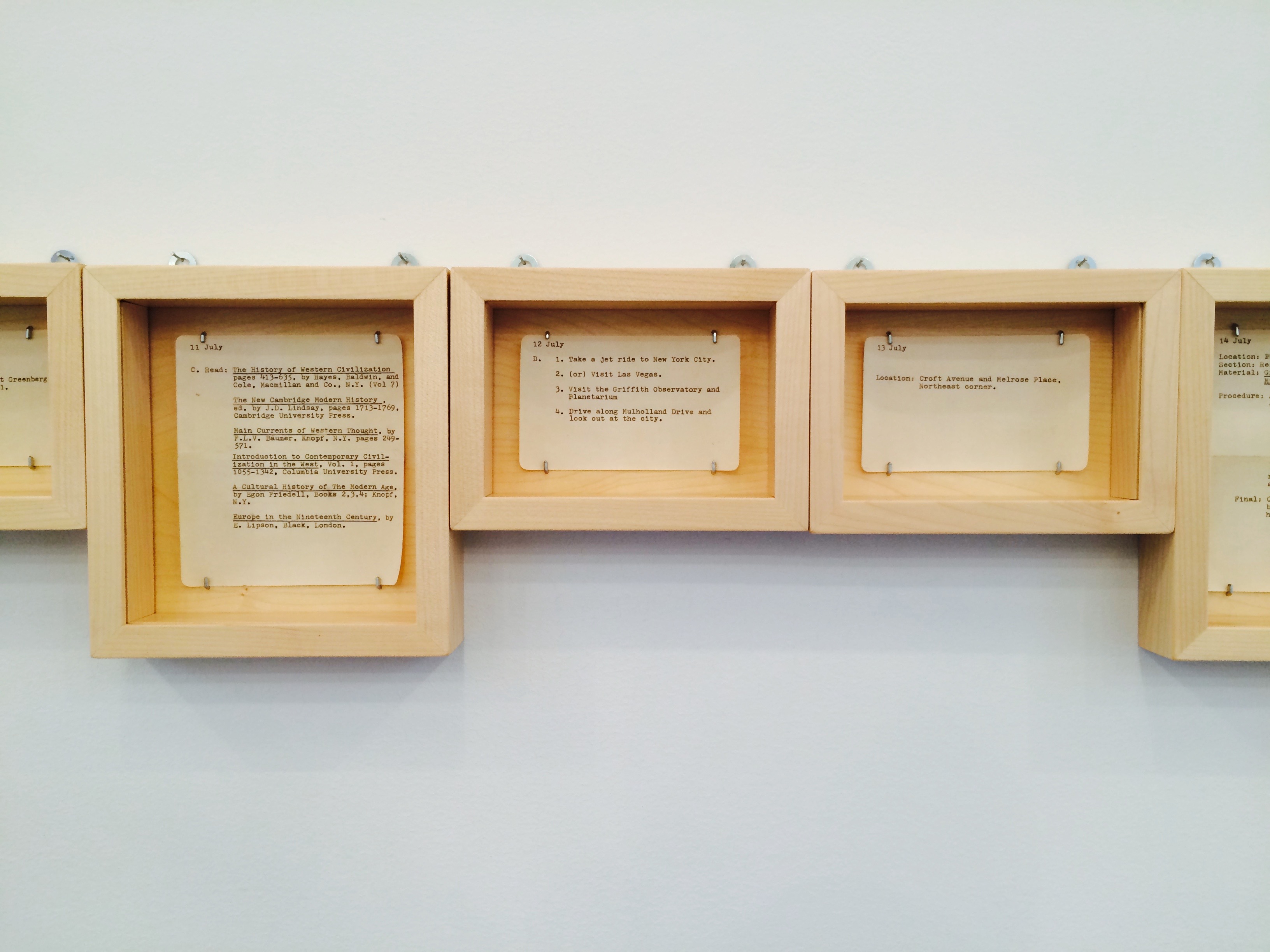 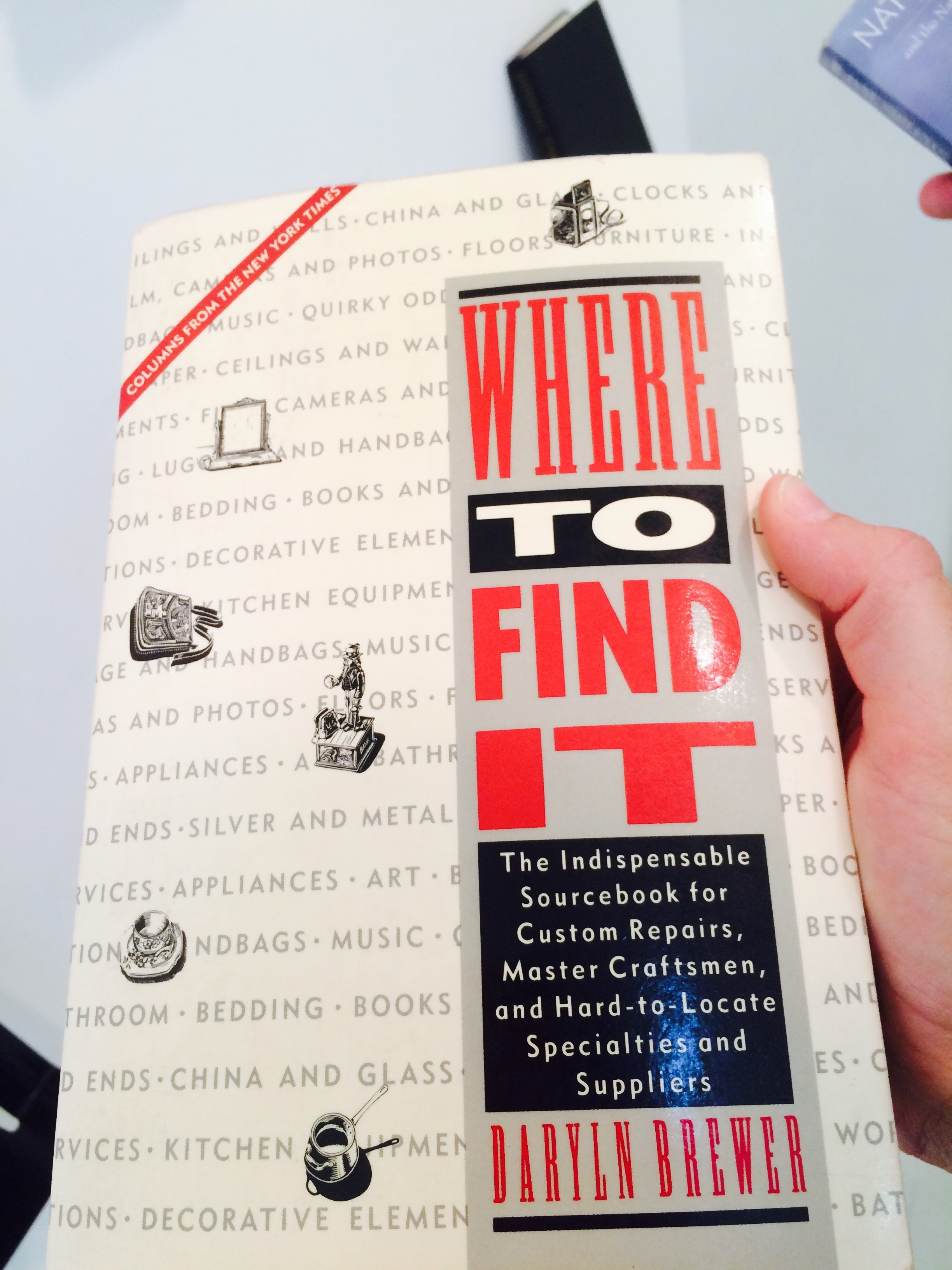 Eighth, textual alteration was again central to McArthur Binion’s “Re:Mine” at Galerie Lelong. While Henner mines the Internet for source material, Binion mines the forms of Minimalism and representations — personal, bureaucratic, etc. — of personal identity. In “Re:Mine,” part of his DNA series, Binion uses his birth certificate and address book, with their regimented, linear forms, to create a gridded “under-surface.” He then applies horizontal and vertical strokes of paint, which serve both to “weave” the documents together into a tapestry, and to partly obscure their data. Thus, by “mining” his own textual DNA, Binion is “both hiding and excavating biographical information in his paintings, claiming and reclaiming personal and cultural history.” 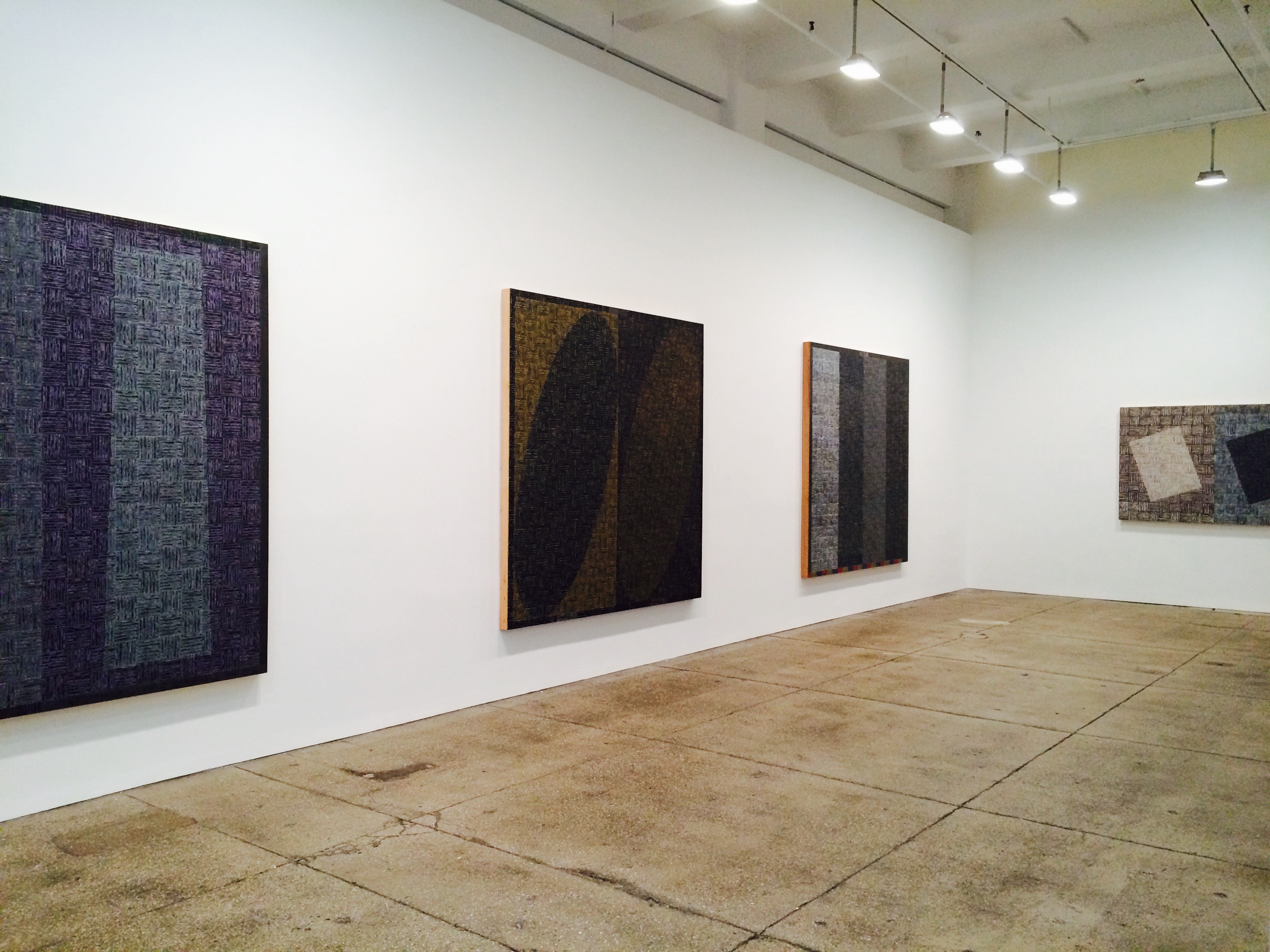 Tenth, Paul Sharits takes the opposite approach — pairing semantically-empty imagery with disjunctive sound — in “Dream Displacement” at Greene Naftali. Sharits’s work emphasizes the physical properties of celluloid and its mechanical apparatae. As he explained in a 1976 interview about this particular work,

I want the films to have a physical presence and there is also a kind of physical adjustment I want to get between the sound and the image. It’s not any rational measure or anything — I’ve just got to figure out how to get it to be the right balance so that one is constantly threatening the other. One element threatens with violence, the other with beauty. 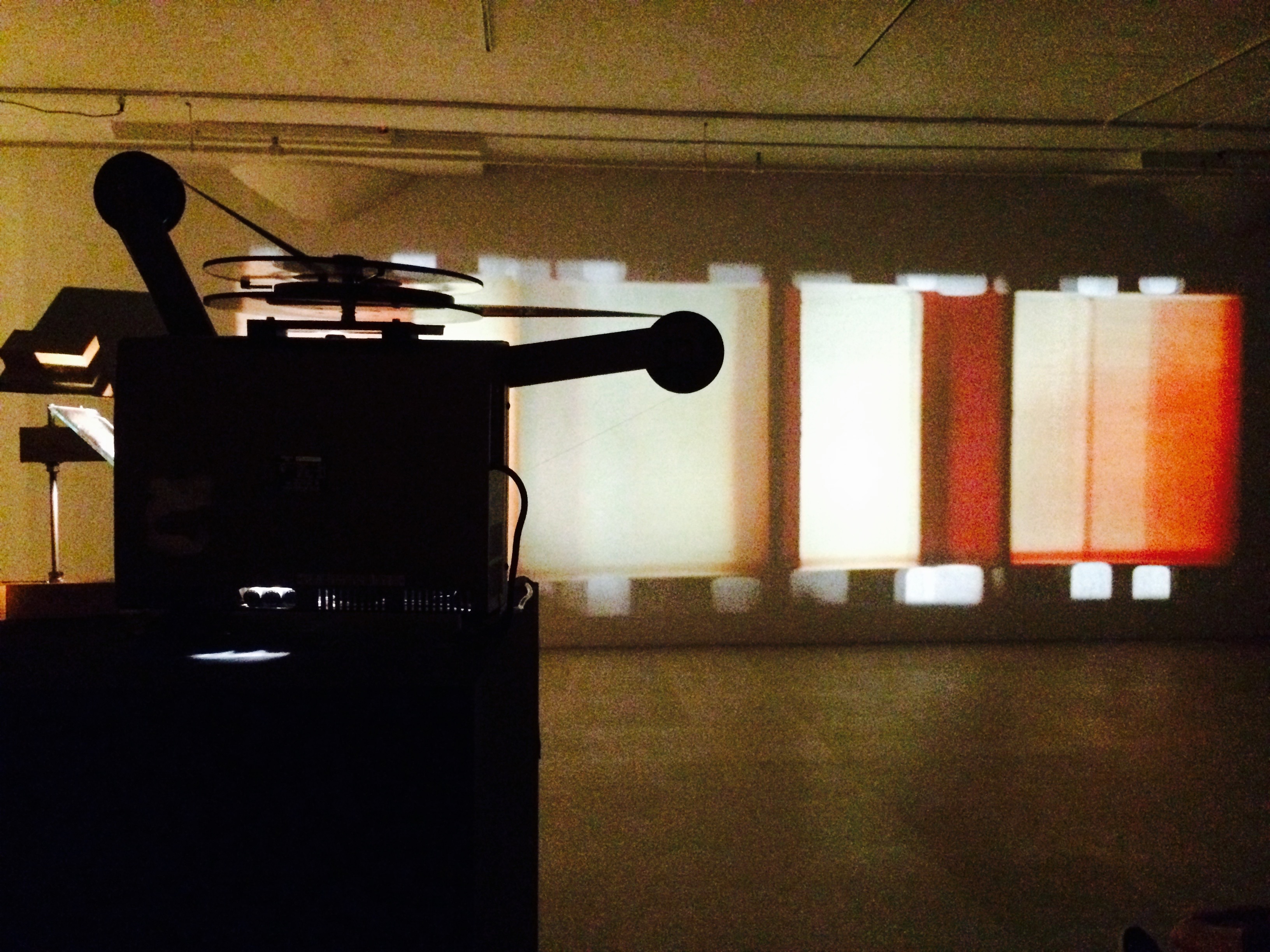 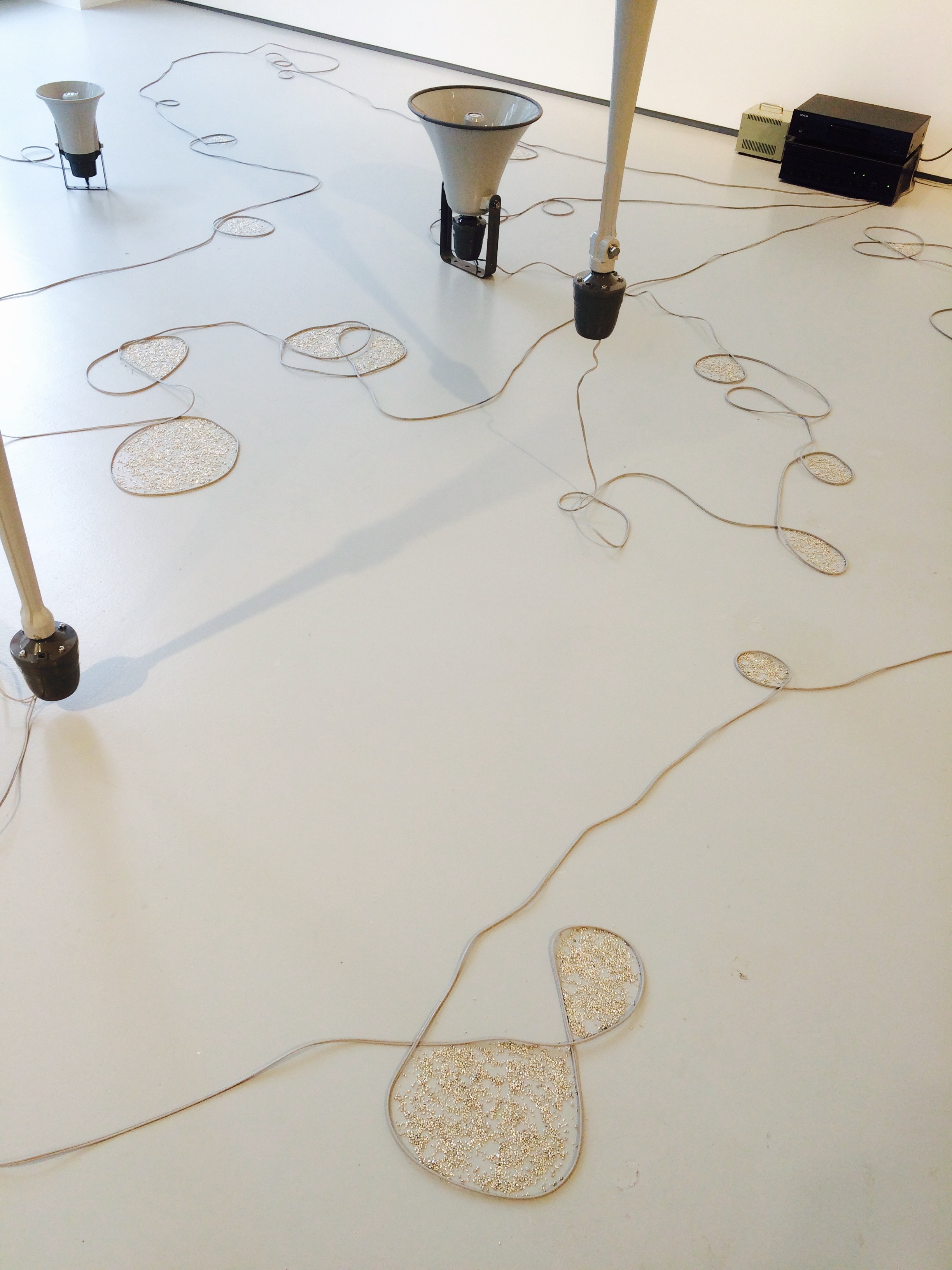