Let’s start with the joint-Scott Reeder / Andrew Kuo “It Gets Beta” (ha!) show at Marlborough Chelsea. I quite enjoyed Kuo’s Aztec Rayogram Infographics (that’s my term — not his) — geometric abstractions as parody data visualizations. Check out the legend beneath the graph, which includes such useless variables as “It takes too much effort to argue with the successful people who think everyone else just isn’t trying” and “Exercise is hard, eating well is boring and drinking gets expensive, but pictures of cats will never fail.” Crazy! 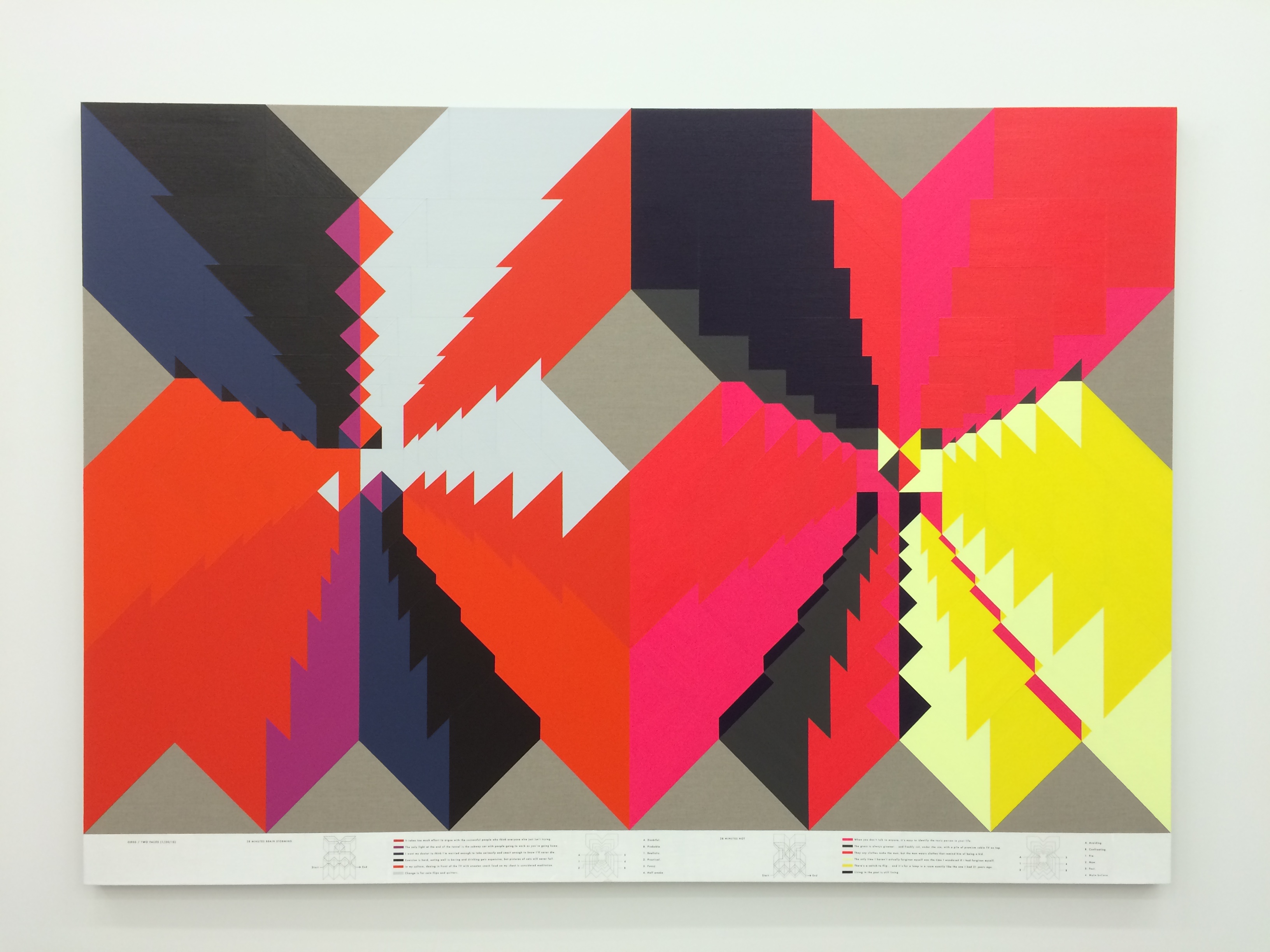 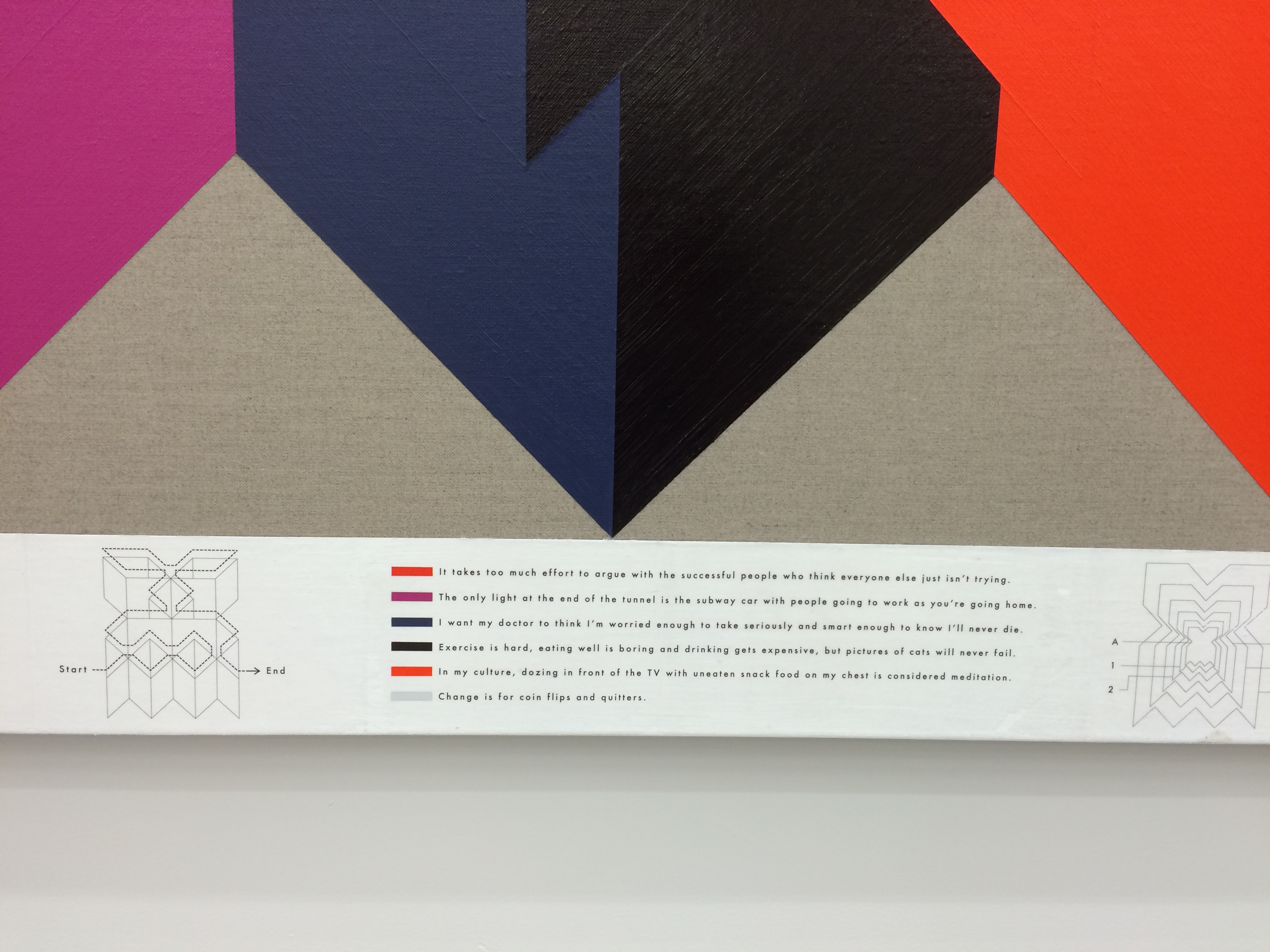 Then on to Kevin Beasley at Casey Kaplan. For his Movement IV he attached contact mics to each key of a vintage Steinway, and hooked those mics up to a soundboard — which  means that, when the piano is played, we hear both the tone of the struck key and the sounds of bodily contact. And on the walls we find acoustic mirrors fashioned of resin and old house dresses (similar to those worn by Beasley’s grandmother) and t-shirts. These bowl-shaped sculptures are doubly resonant: both encapsulating the artist’s personal material history and catching and refracting sound waves in the gallery. These dishes thus capture echoes both of the moment, and of deep personal history. 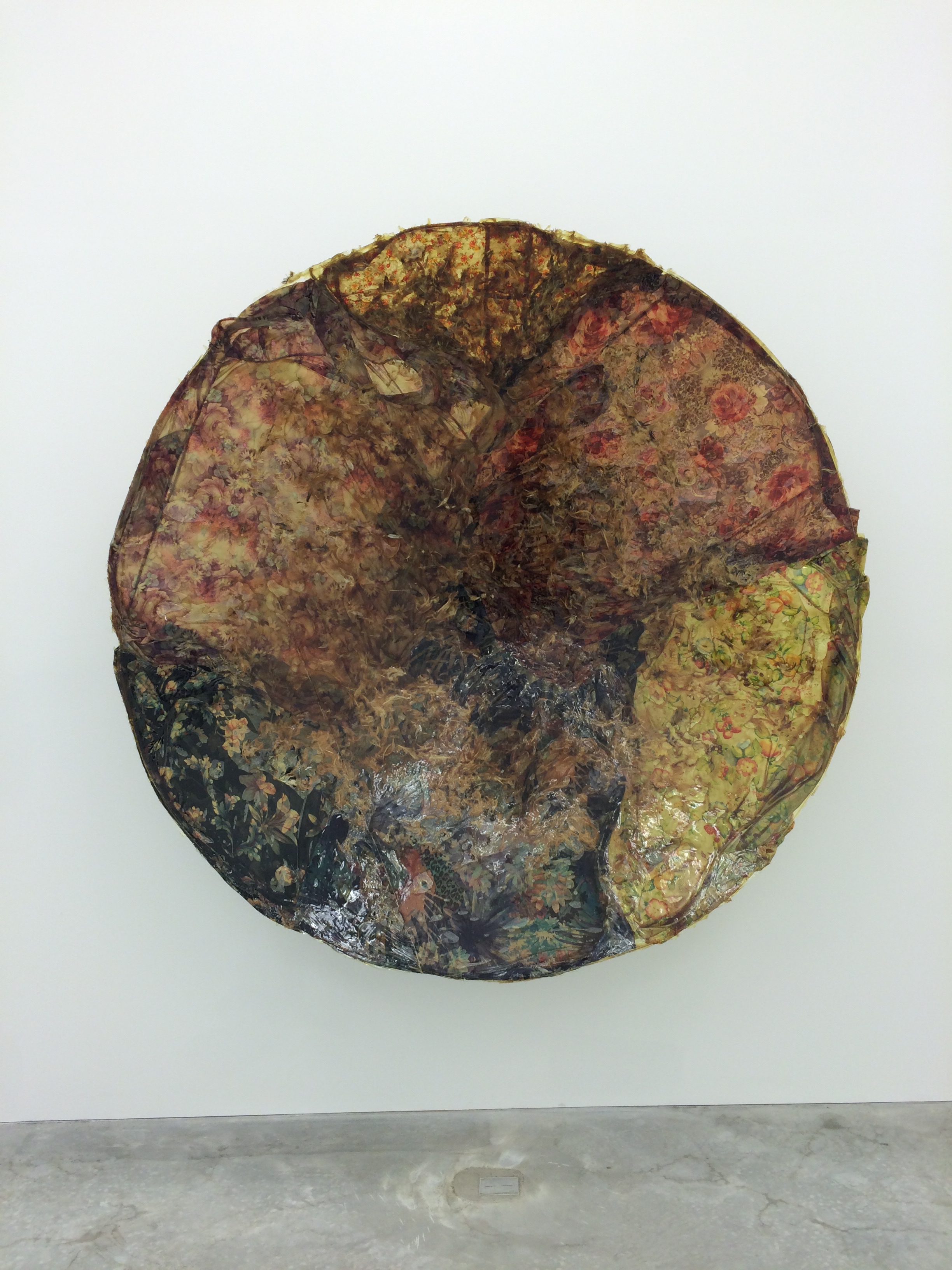 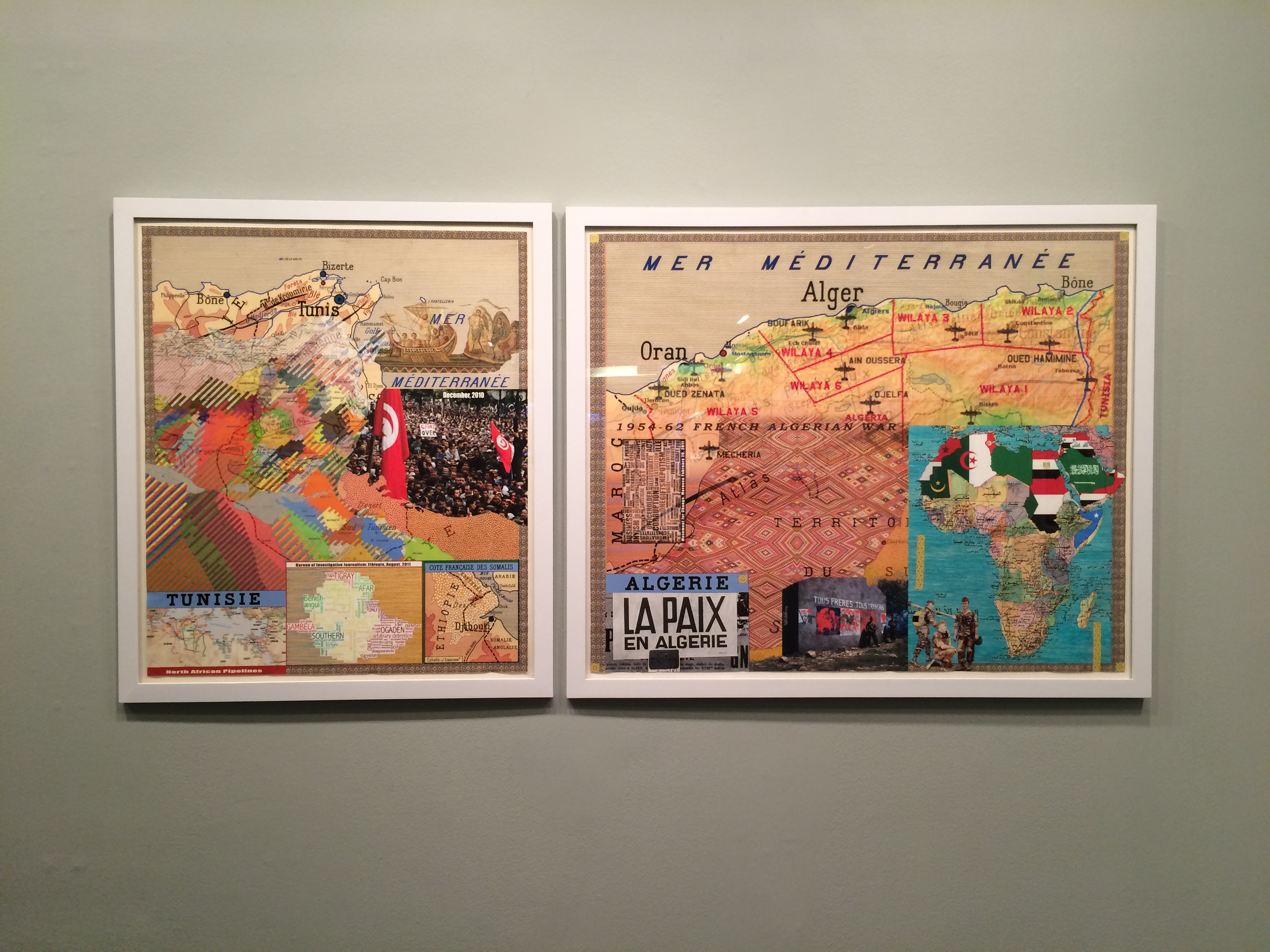 After that, the magnificent “Making Music Modern” at MoMA, a wonderful multi-instrumental exhibition on the shared rhythms and tonalities of music and design throughout the 20th century:

Music and design—art forms that share aesthetics of rhythm, tonality, harmony, interaction, and improvisation—have long had a close affinity, perhaps never more so than during the 20th century. Radical design and technological innovations, from the LP to the iPod and from the transistor radio to the Stratocaster, have profoundly altered our sense of how music can be performed, heard, distributed, and visualized. Avant-garde designers—among them Charles Rennie Mackintosh, Lilly Reich, Saul Bass, Jørn Utzon, and Daniel Libeskind—have pushed the boundaries of their design work in tandem with the music of their time.

Then: the stupendous Subodh Gupta’s “Seven Billion Light Years” at Hauser + Wirth, which explores the monumental, even cosmic, dimensions of the mundane. As the gallery explains, “Gupta captures the everyday realities of life in India – its nearly surreal collisions between the inescapably earthy and the ineffably divine, between the current of masses and the path of private days – through works of art that address dichotomies between traditional values and the impact of globalization.” Pots and pans and utensils carry, in their scratches and dings, traces of their daily patterns of use — in cooking and eating and washing. 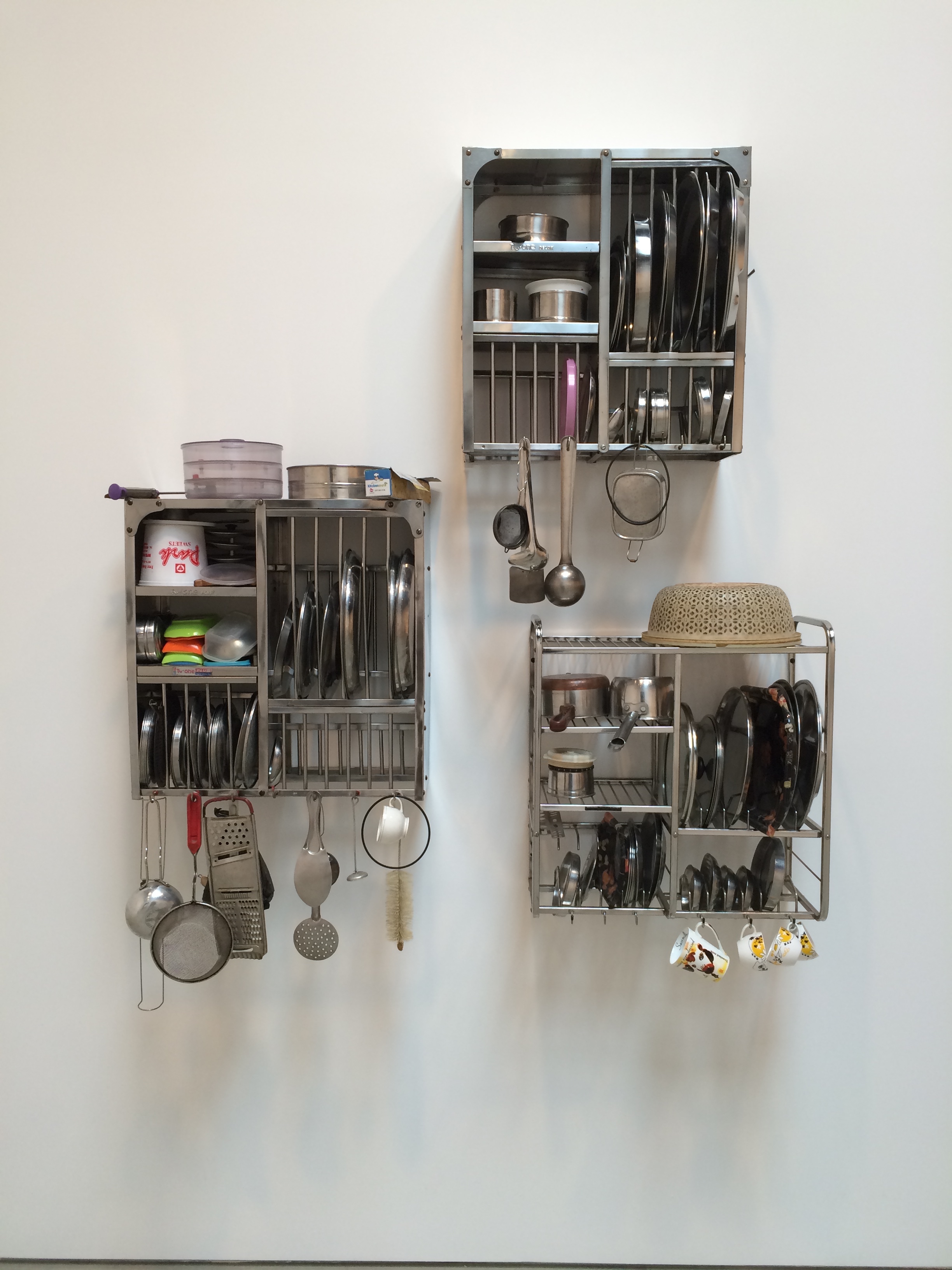 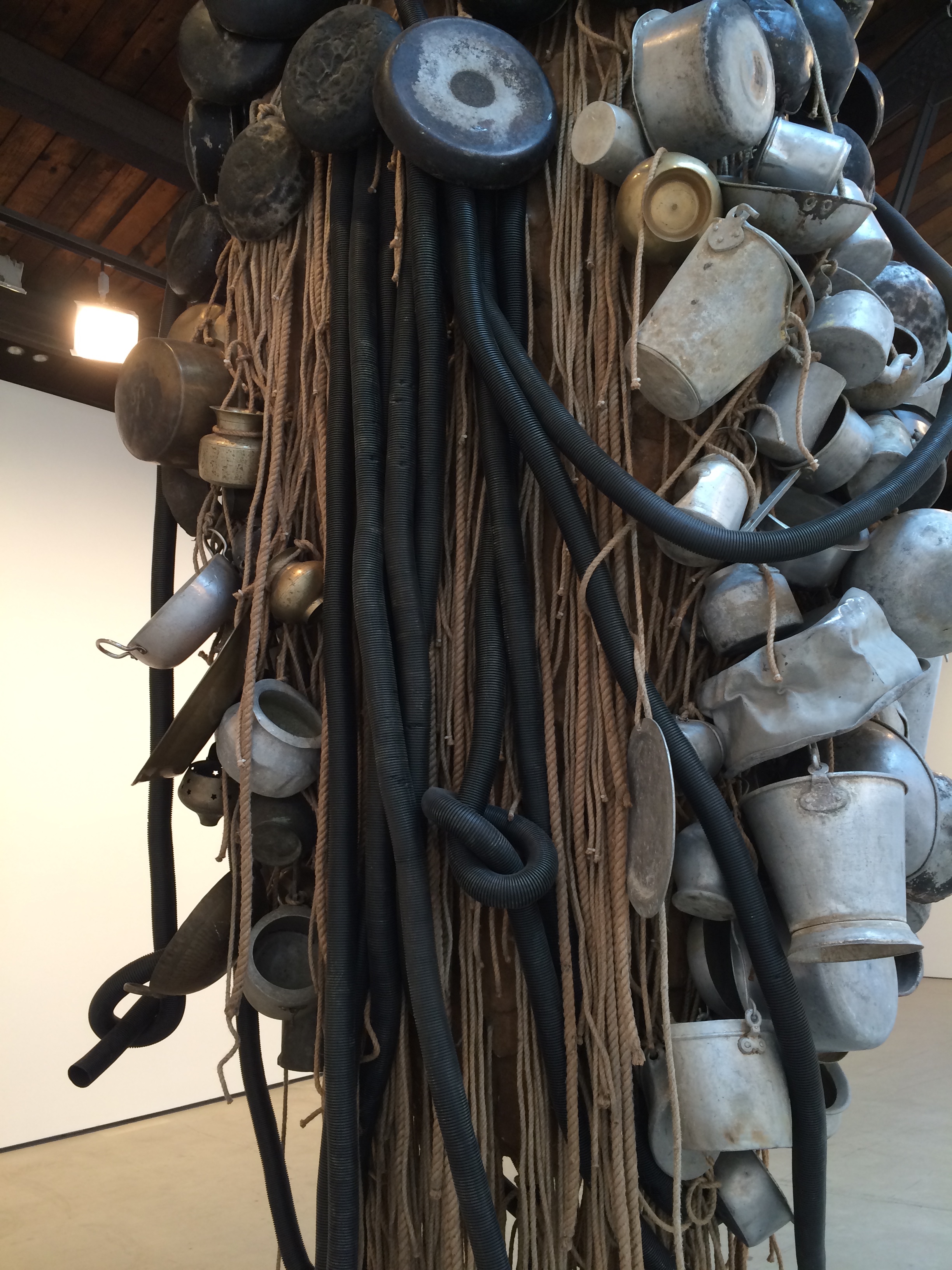 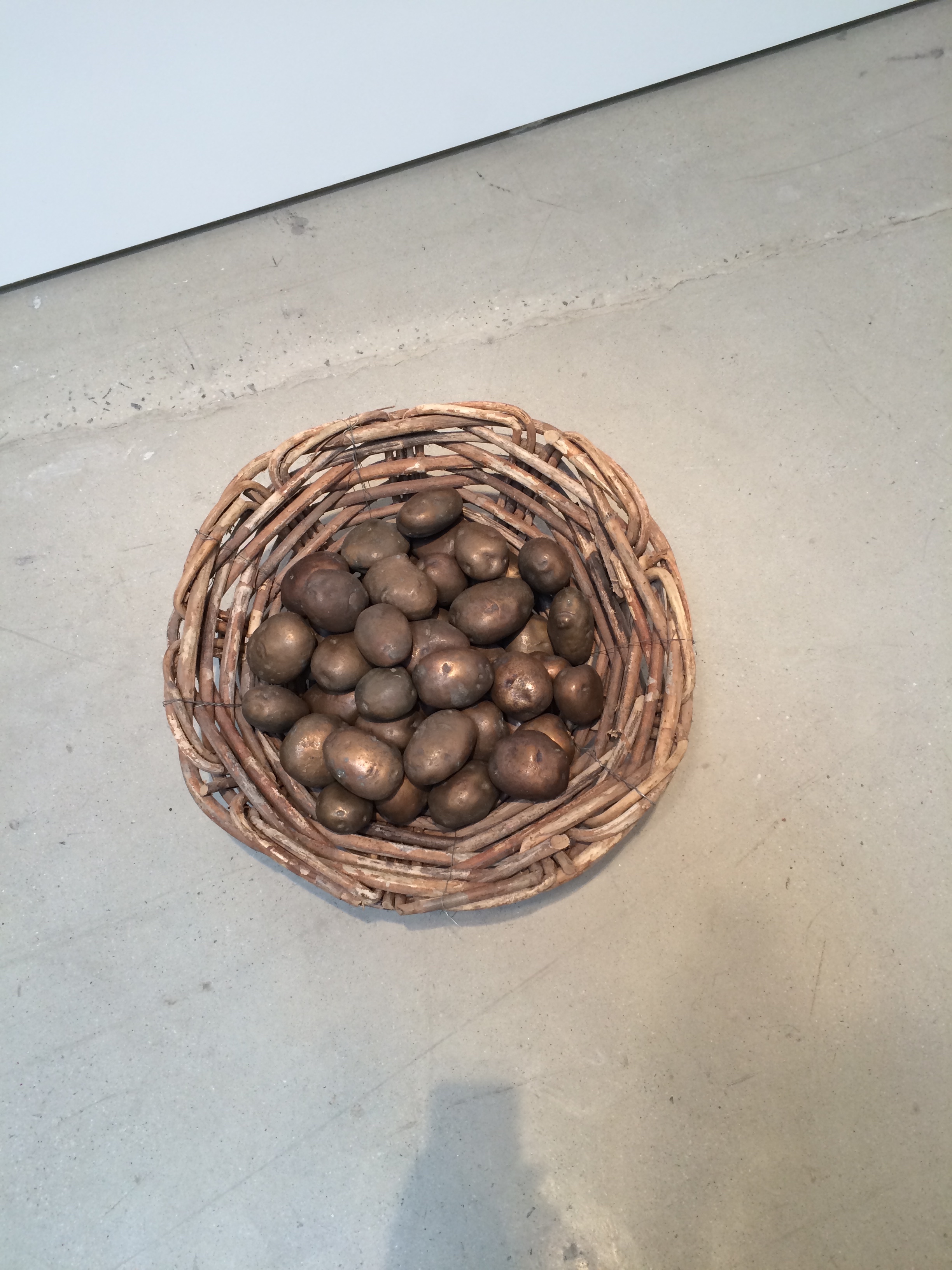 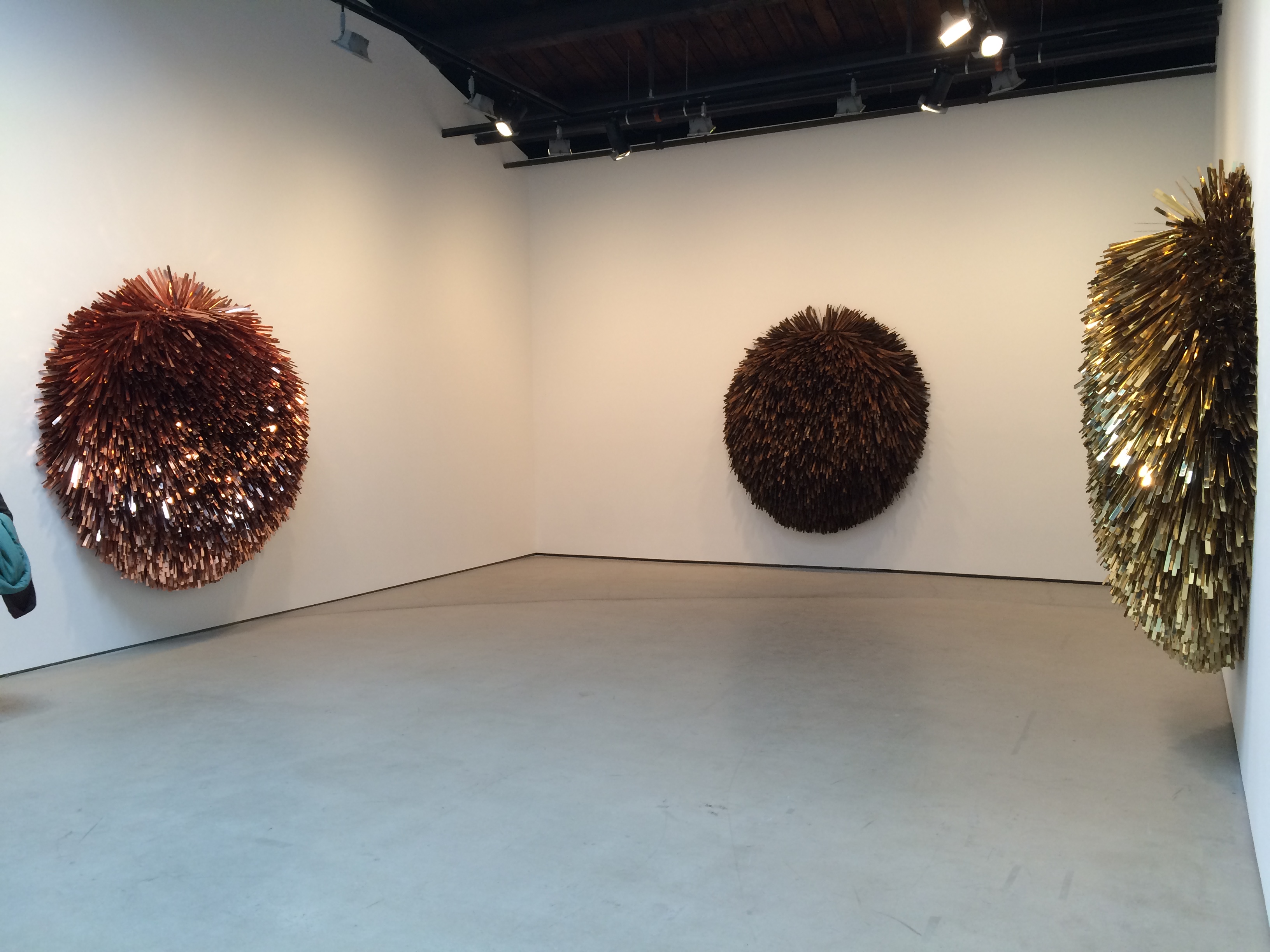 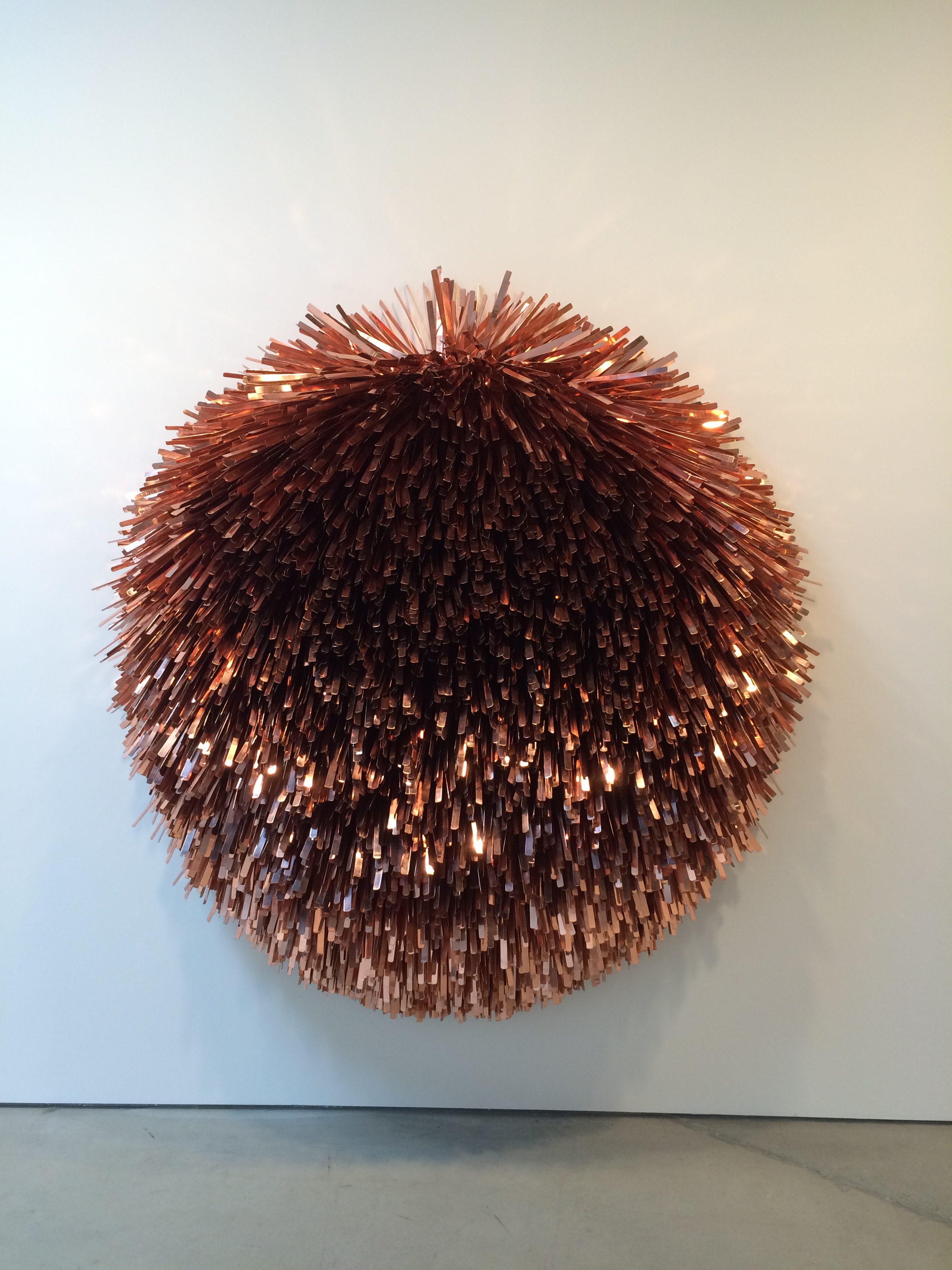 Then on to Charles Atlas’s “The Waning of Justice” at Luhring Augustine, which juxtaposed various temporal scales: the glacial, the seasonal, the tidal, the solar and lunar, the microtemporal, and perceptual time. 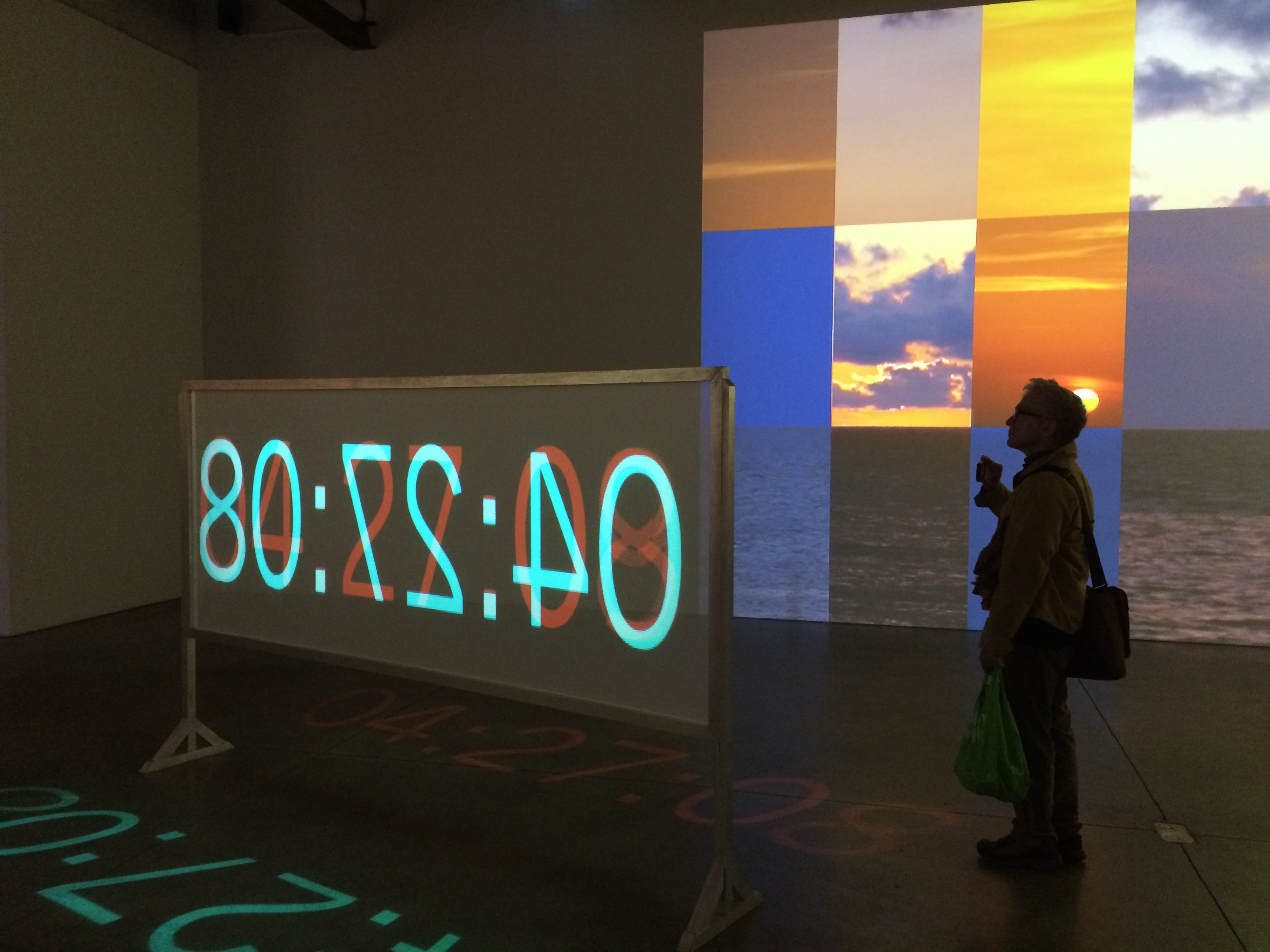 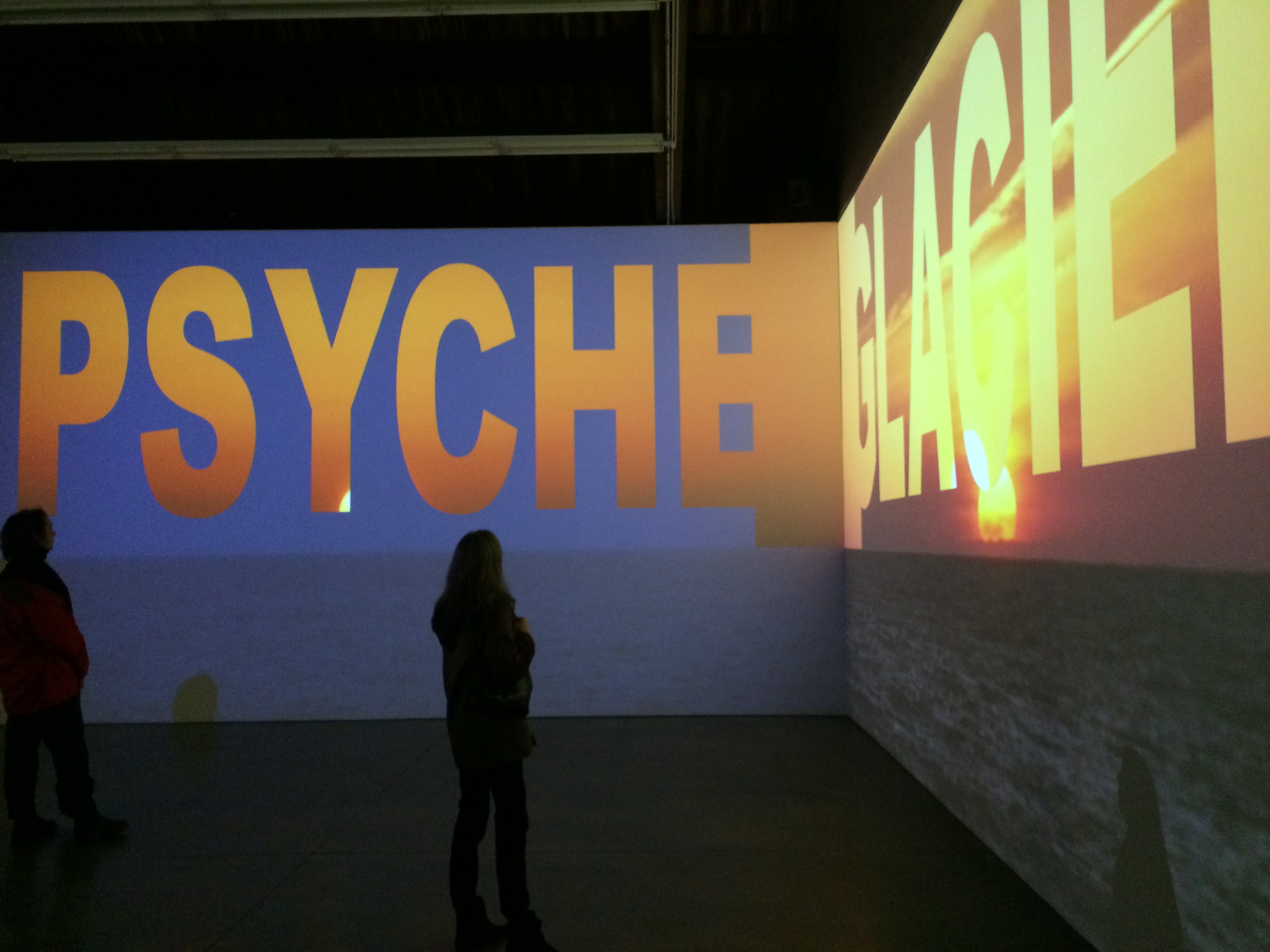 After that was Michael Snow’s “A Group Show” at Jack Shainman, which, like Atlas’s work, played with temporality and language, but with more overt humor. The video installation That/Cela/Dat juxtaposed English, French, and Dutch texts — which periodically switched positions, taking turns on the main screen and on side monitors, in apparent “subtitle” roles — to comment on the nature of language (i.e., “this is not that”) and the very fact of the viewer’s presence, viewing. Achingly post-structuralist. And hilarious. 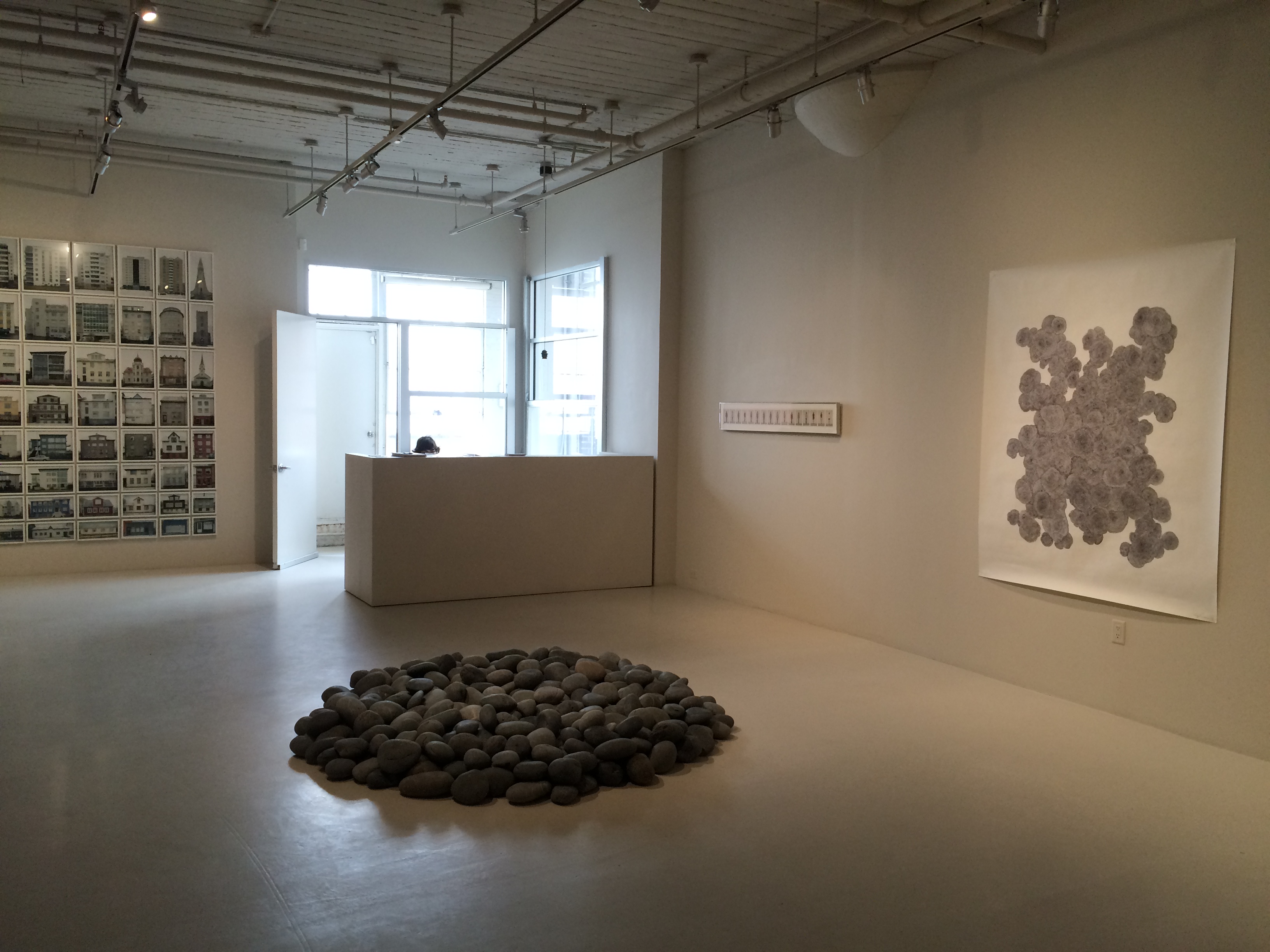 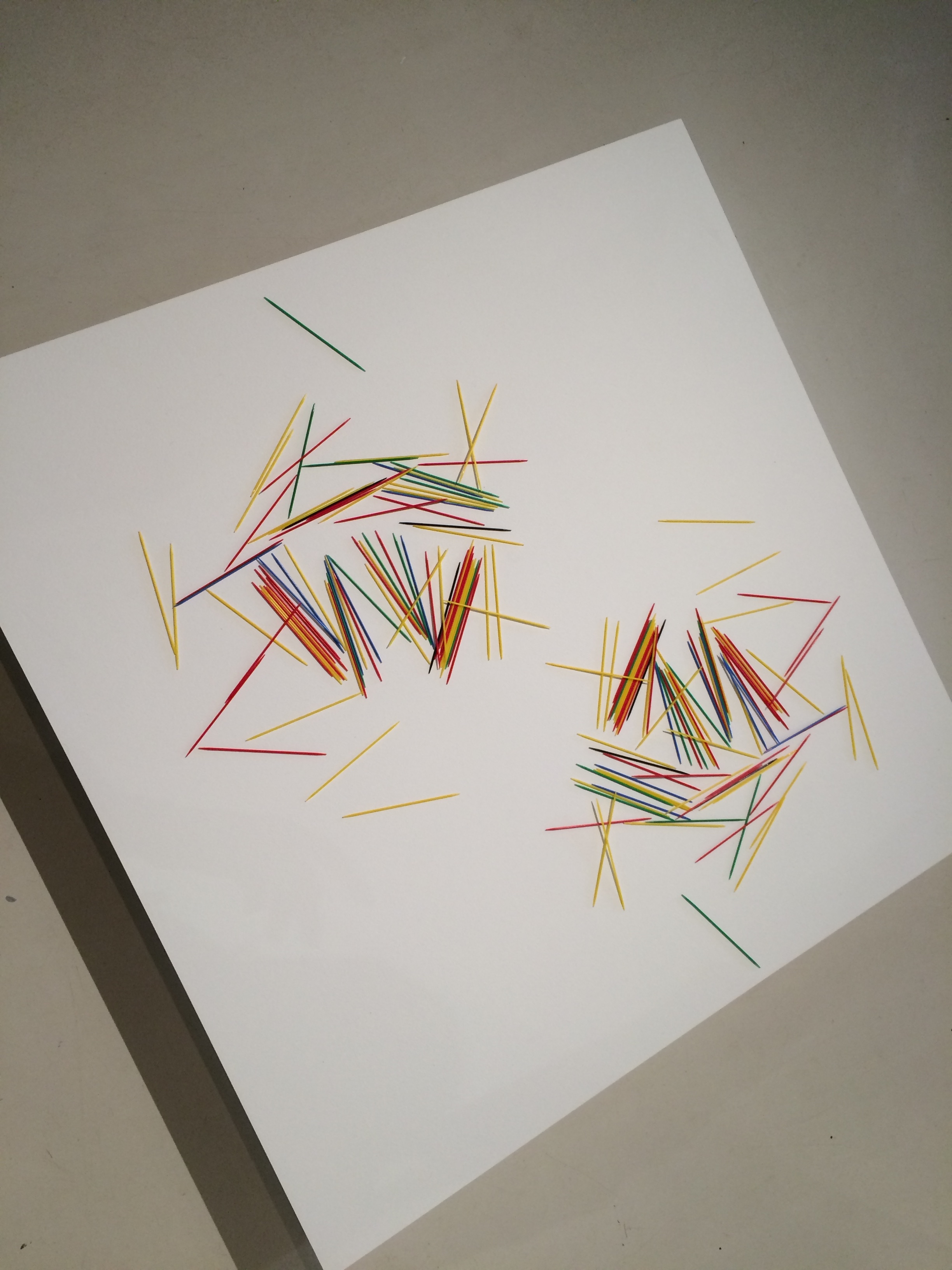 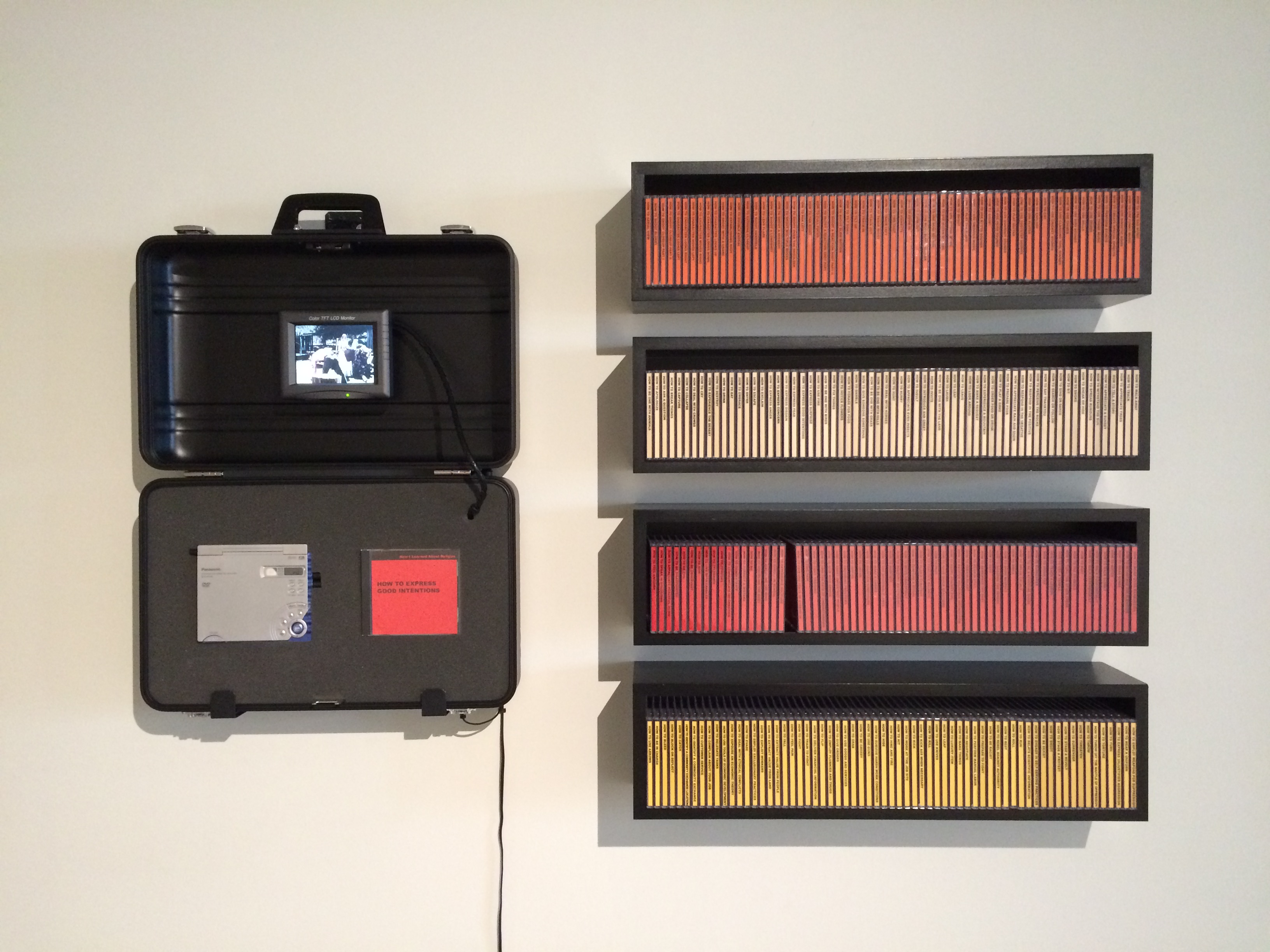 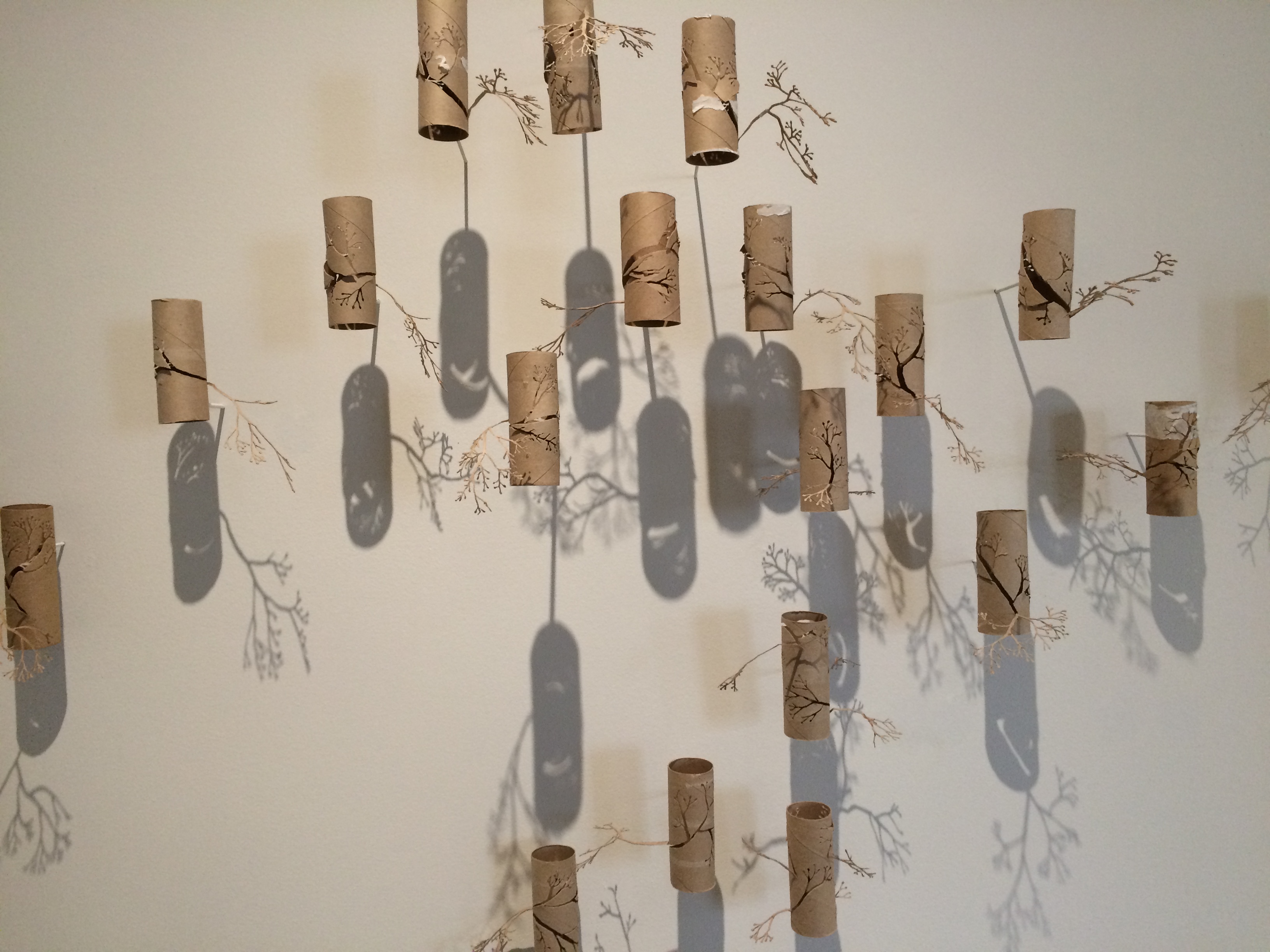 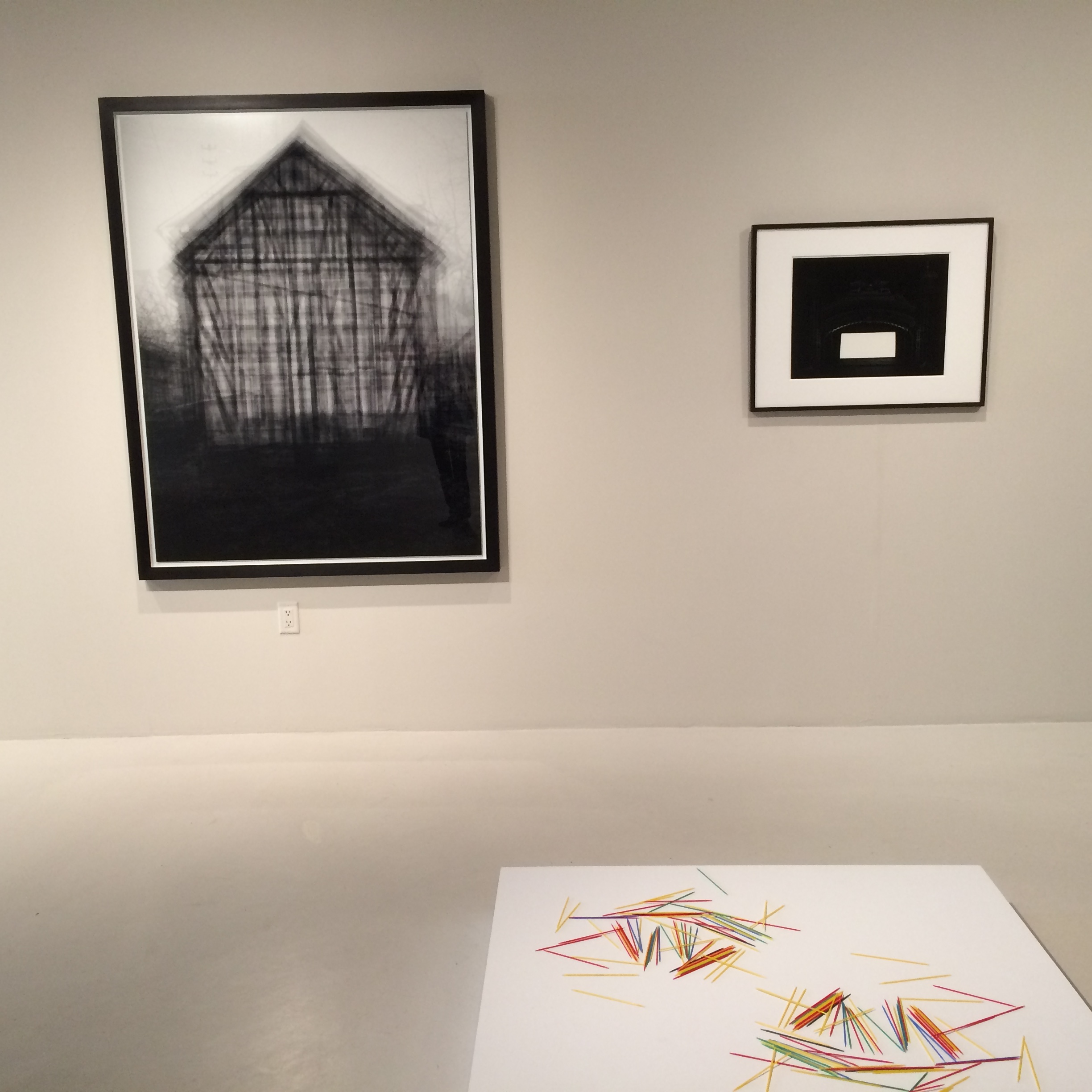 Then, in keeping with the temporality and collection themes: my colleague Ernesto Klar’s “Invisible Disparities” at Postmasters documents his three-year journey to collect dust from around the world. As the gallery explains,

He began by selecting locations – forty of them – where a plurality of histories, times, and potentialities physically co-exist within their man-made infrastructural elements. Locations range from well-known to unfamiliar historical sites, from ancient sites to contemporary past sites. The West Bank, Rwanda, Hiroshima, Hollywood, Athens, Rio de Janeiro, Beijing, Warsaw, Petra, Moscow, Dhaka, Havana, Sydney, and Ho Chi Minh City are among them. Klar traveled to each location to collect, store, and archive its dust. These processes are methodically documented on video, where the artist is seen always wearing the same uniform and using a portable duster to vacuum the dust. This performative action, the actual vacuuming of dust, represents for the artist a centrifugal gesture that instigates, both literally and metaphorically, the convergence of disparate temporal, historical, and material relationships. After having collected dust at all sites, the artist created a sculpture by mixing together and then fusing the dust under intense heat. Klar refers to the resulting sculptural work as one anthropic rock, or a man-made rock, in which invisible disparities join one another and transmute into new matter. Separately, Klar has created an artist book that archives individual dust samples for every site in hermetically sealed glass vials. All forty videos, anthropic rock and the book will be on view.

And finally, while visiting Montreal for a conference, my friend Brendan Kredell and I visited the Canadian Centre for Architecture — which I haven’t visited since I was a Visiting Scholar there in 2012! — for their gorgeously designed “Rooms You May Have Missed” exhibition, which echoes many of the themes central to Gupta’s work at Hauser + Wirth.

Rooms You May Have Missed reclaims the significance of inhabitation and is for that reason a collection of domestic spaces—entry porticos, kitchens, bedrooms, closets, dining rooms, courtyards, gardens, vestibules, living rooms, offices, dens and washrooms—as reinvented in the work of two very different architects: Umberto Riva in Milan and Bijoy Jain in Mumbai. Common to their practices is a genuine concern for the details that support living in and our common rituals of waking, bathing, eating, entertaining and sleeping.

I just loved all the unfinished walnut throughout the CCA’s galleries. 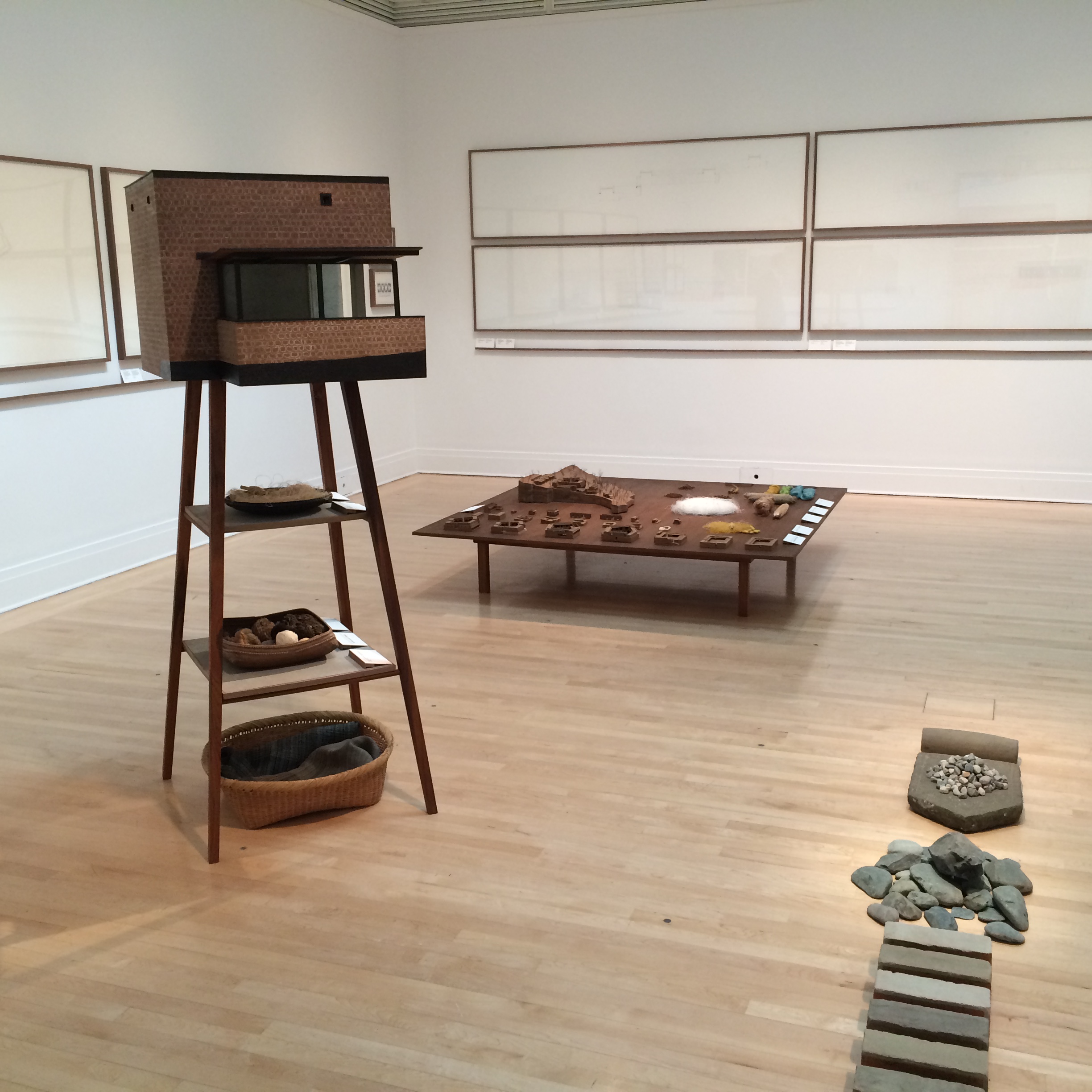 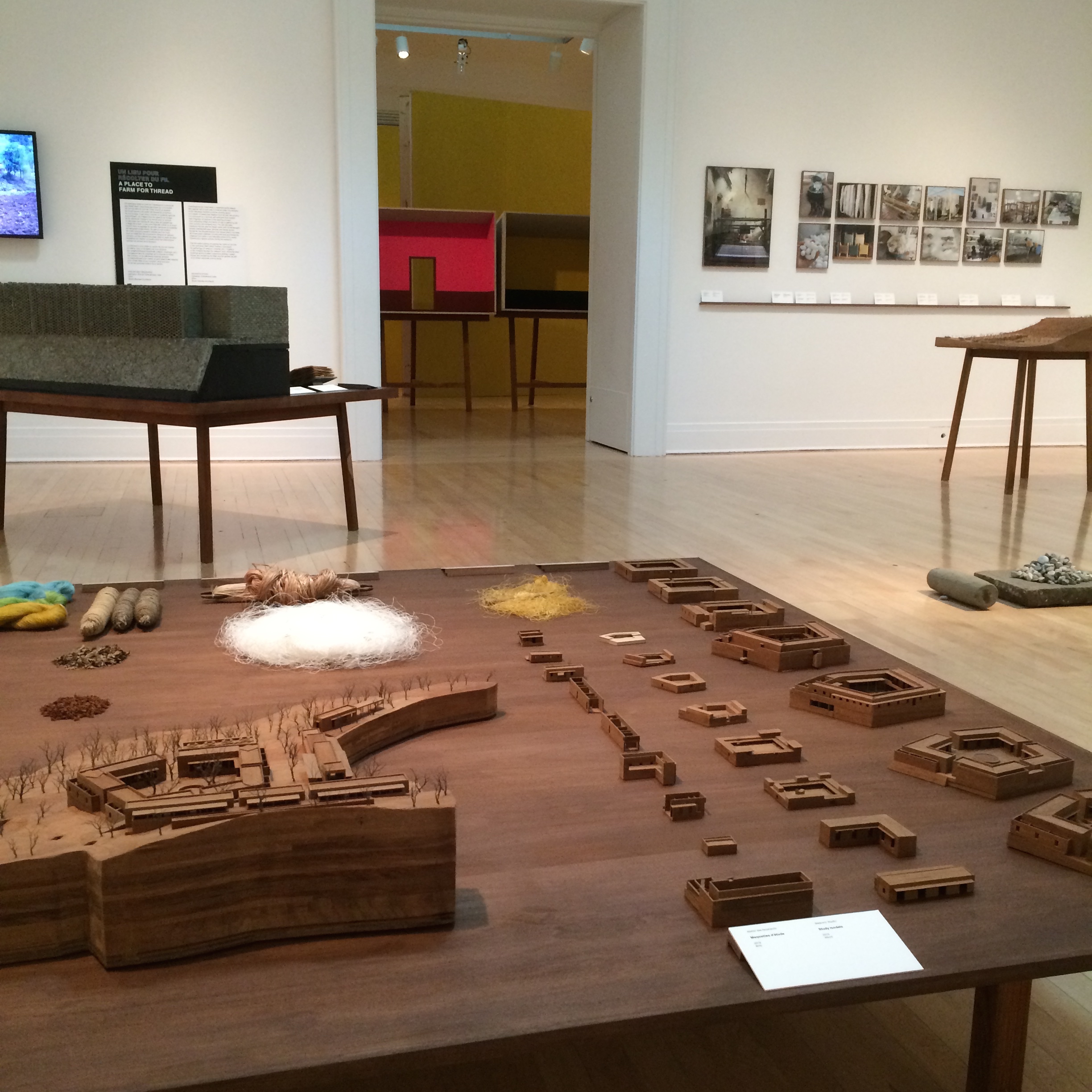 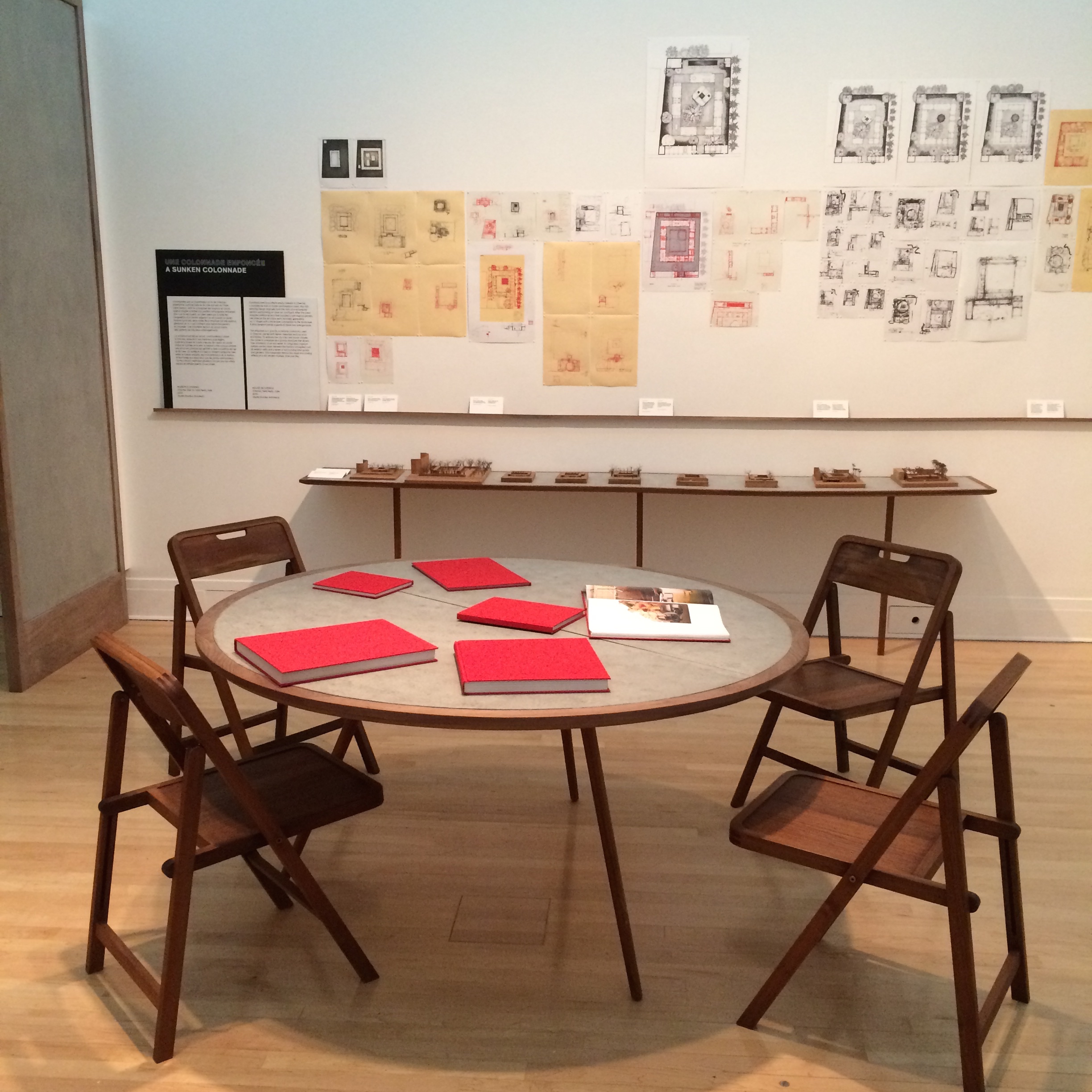 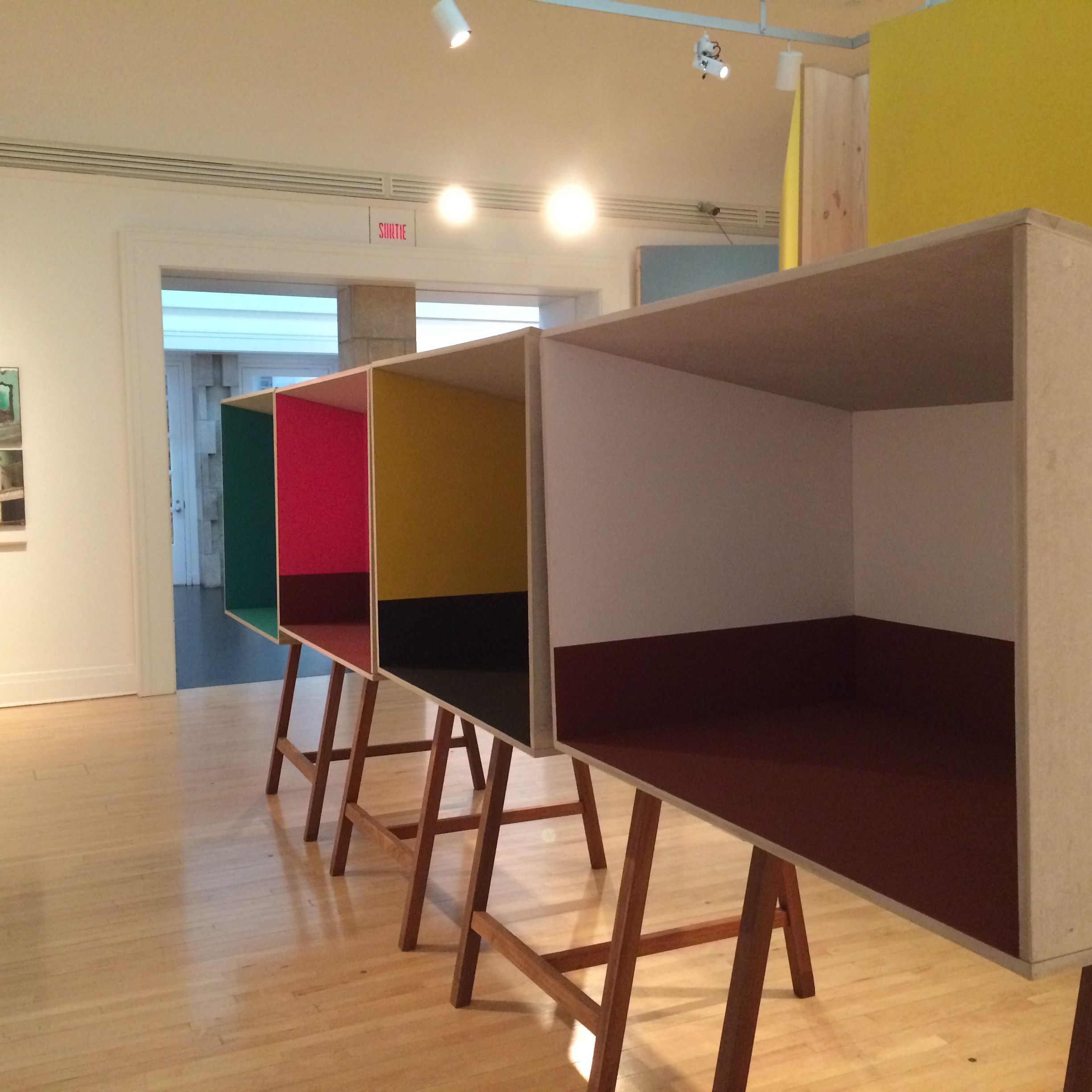