More art — some of which (the latter part of this list) I was able to see with the effervescent Shana Kimball.

First, Loris Cecchini’s “Emotional Diagrams and Other Micrologies” at Leila Heller, which “proposes an overview of the artist’s practice whereby materials are re-explored while reality gradually evanesces across the gallery’s space.” Oh, please. The work was lovely, though. 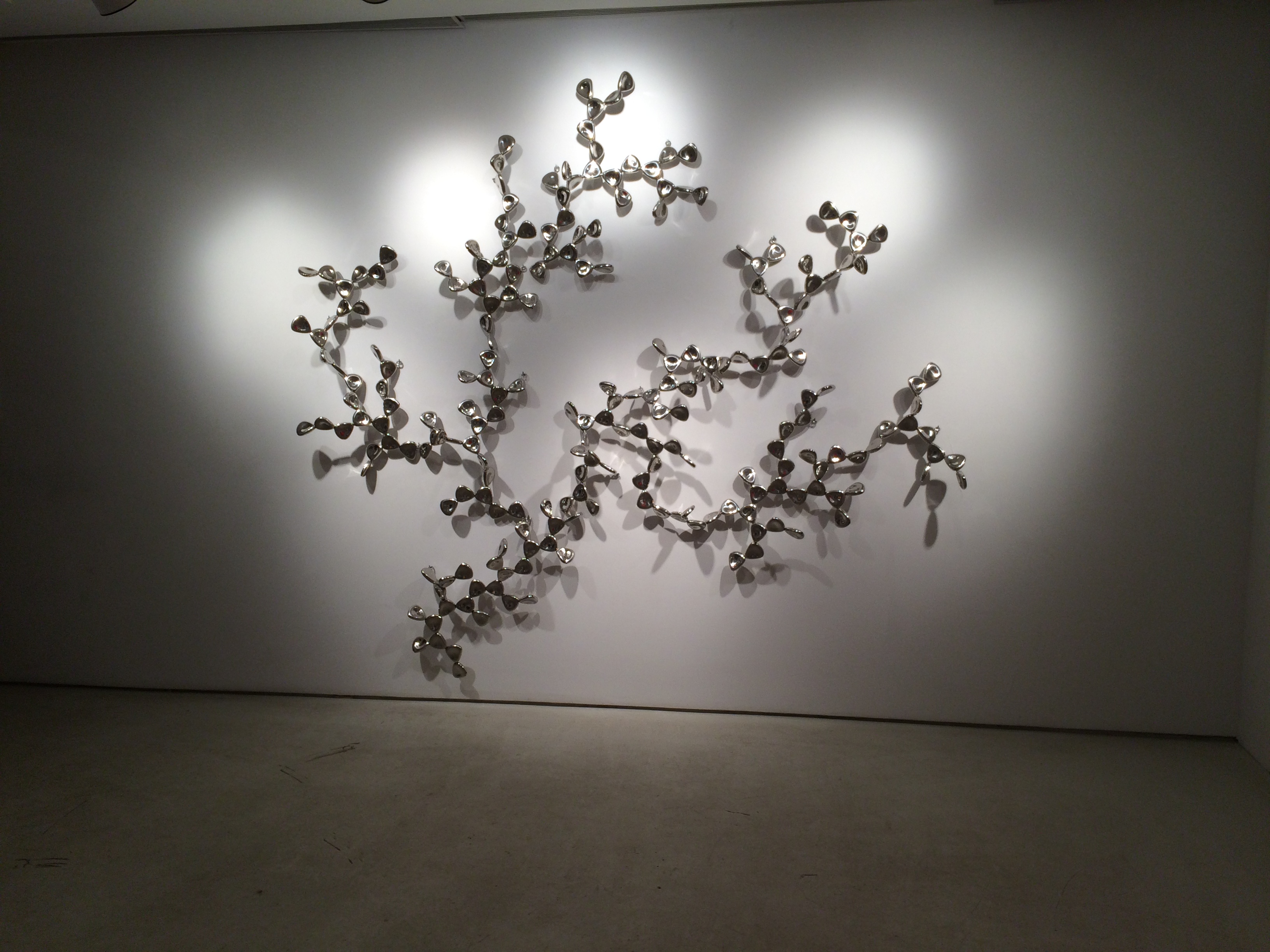 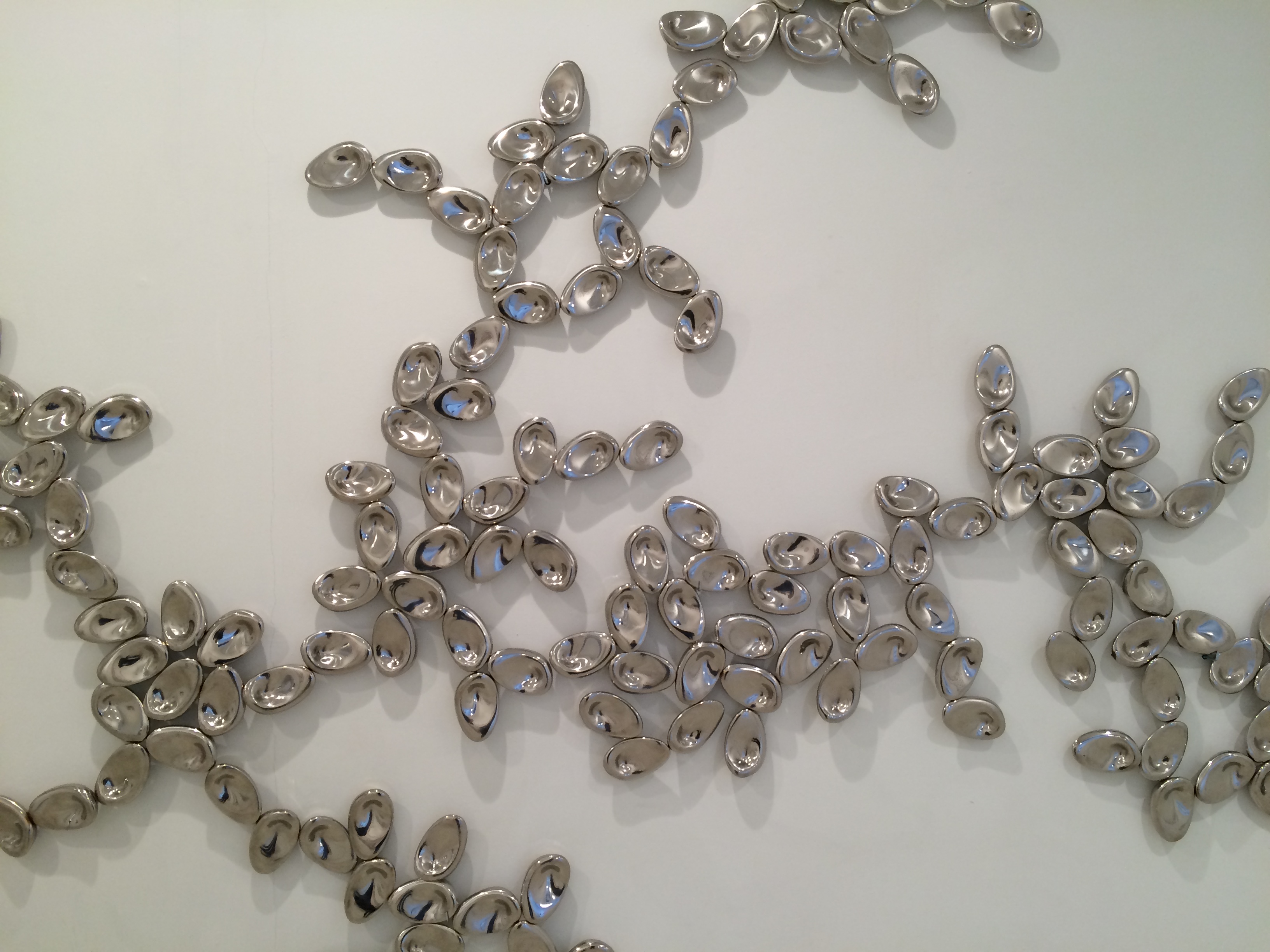 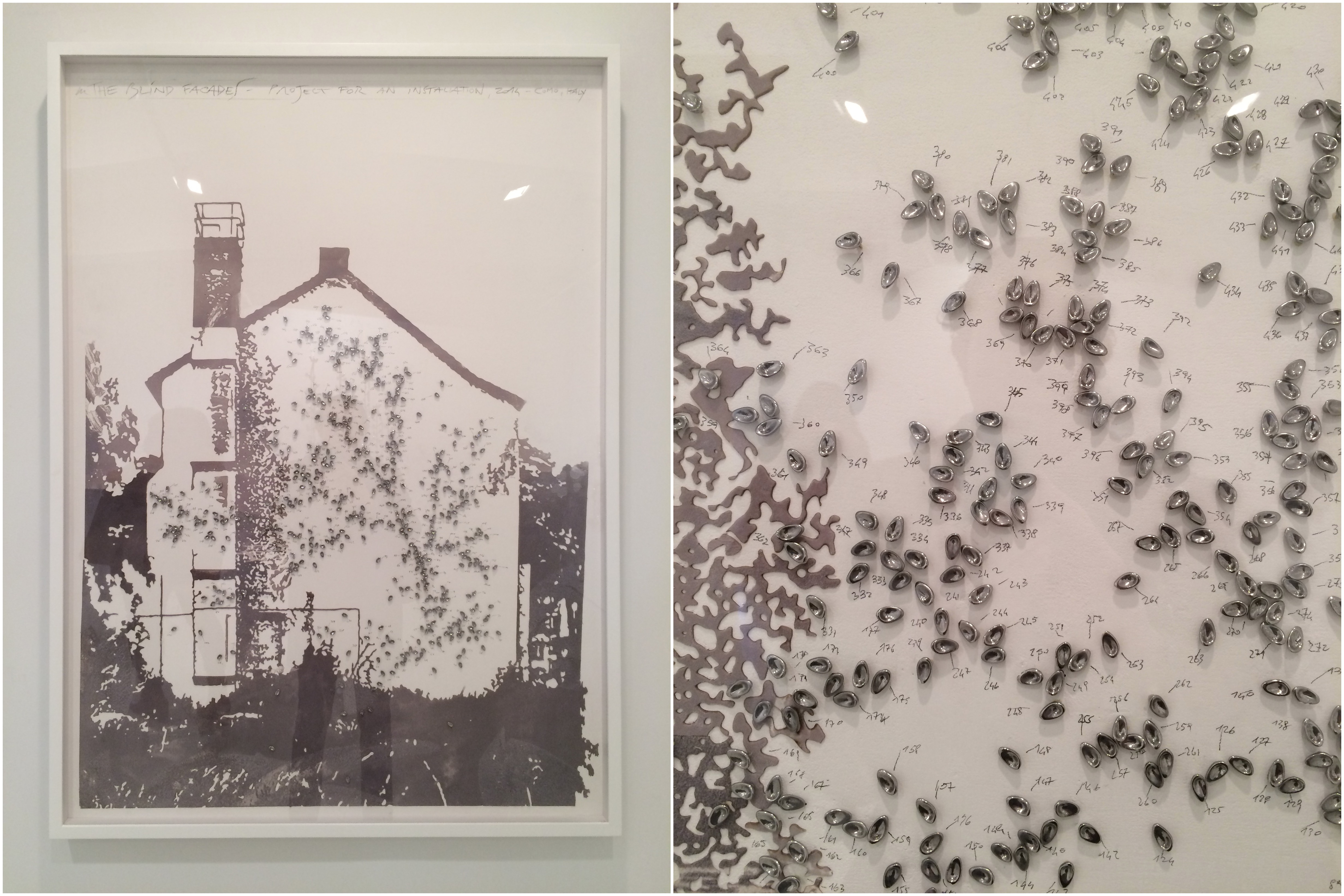 Second, Louise Nevelson’s fabulous “Collage and Assemblage” at PACE, which features the artist’s earliest — and, we’re told, rarely seen — collages. “Nevelson produced these works at the same time as her monochromatic black, gold and white sculptures, using scraps of wood and metal collected from the streets outside of her Little Italy studio. Describing her process across media, Nevelson said, ‘I make collages. I join the shattered world creating a new harmony.’” Joining the shattered world: I love that. 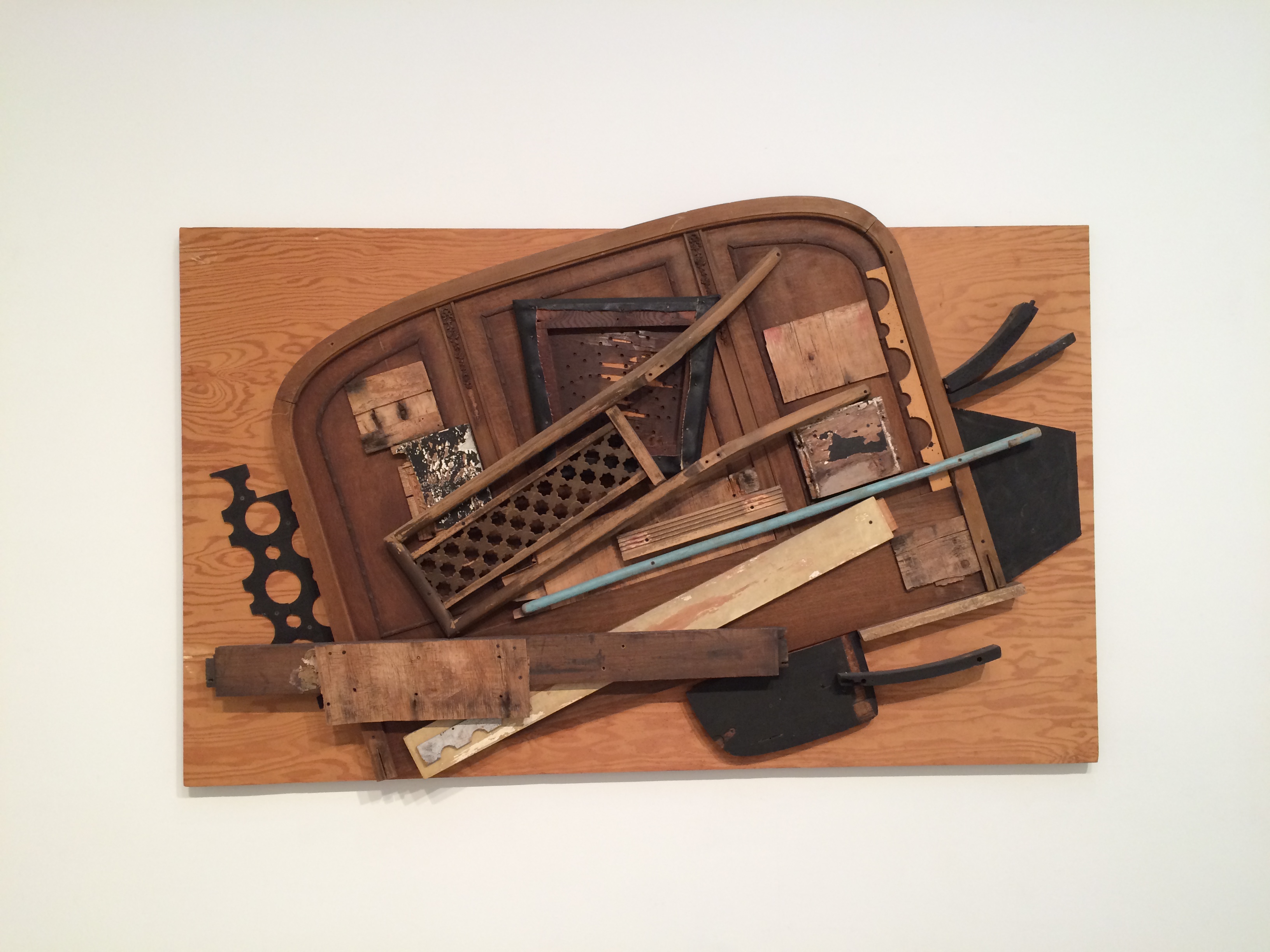 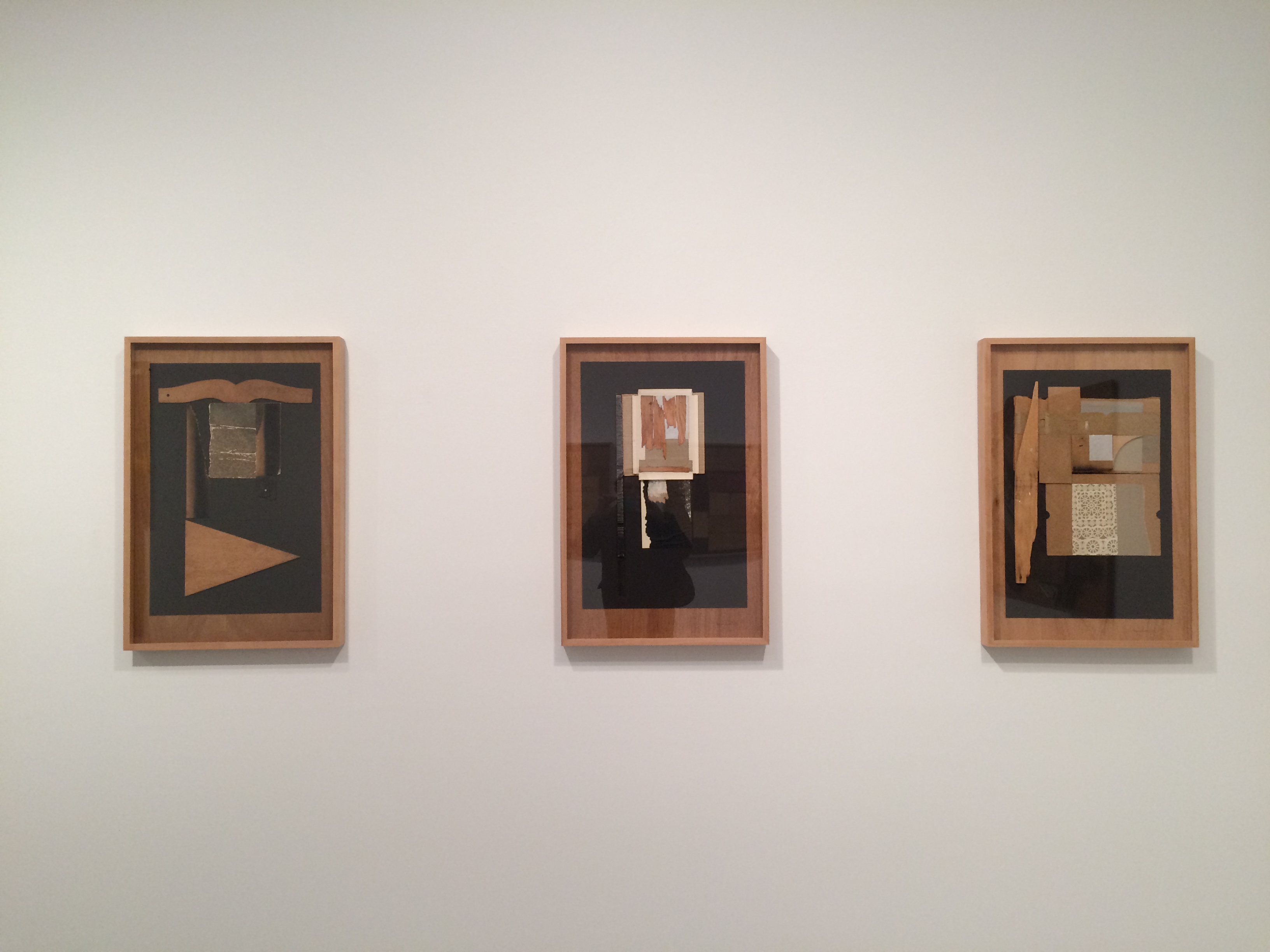 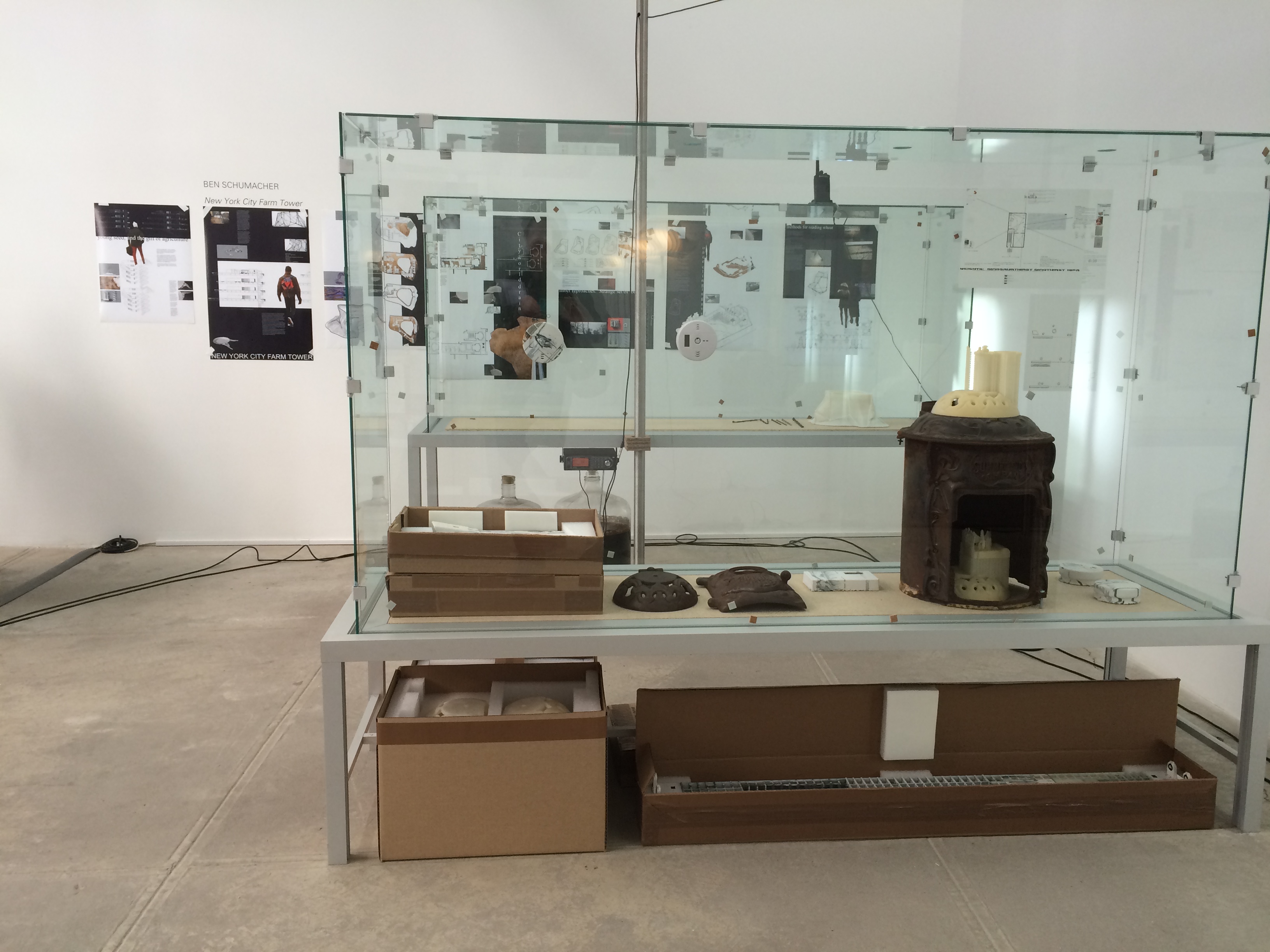 Fourth, “Blueprint” at Storefront for Art and Architecture, which explores the blueprint as “frame, format, and content… [T]he exhibition can not only be seen as a collection of blueprints but also as a collection of anecdotes” behind the designs’ and designers’ coming-into-being. The curators “have asked the artists and architects… to identify and create a space of legibility to let the viewer see behind the mind of the artists from where to start reading an entire body of work” — but without those stories ready-to-hand in the gallery, all we “viewers” see is a random collection of blueprints, which, while lovely in all their indigo-ness, do little to invite deeper reading. The gallery’s exterior — with its fantastic architectural wrap by SO-IL — was a bit more cohesive. 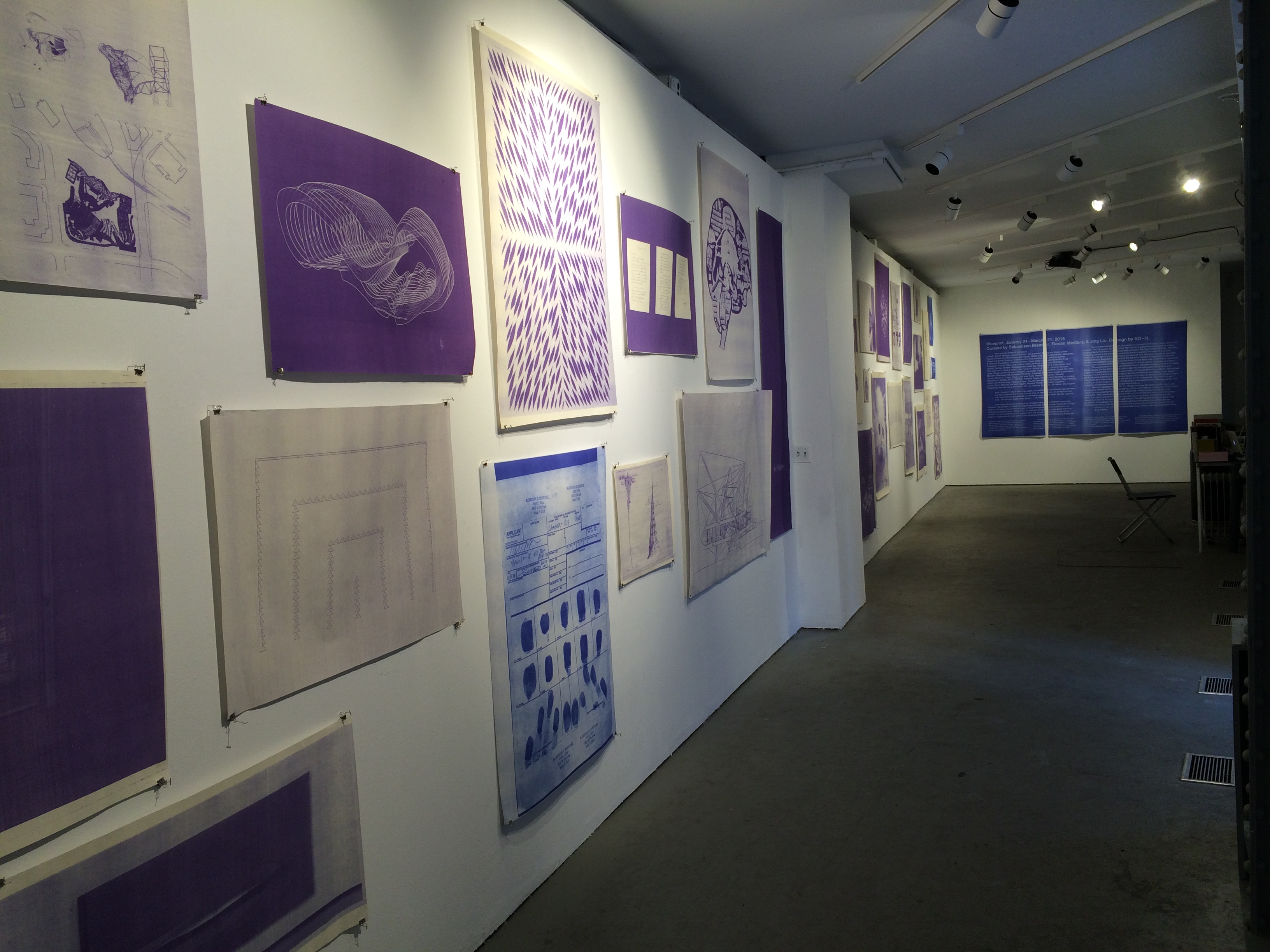 Fifth, “Thanks to Apple, Amazon, and the Mall” at Klaus von Nichssagend Gallery. No comment. 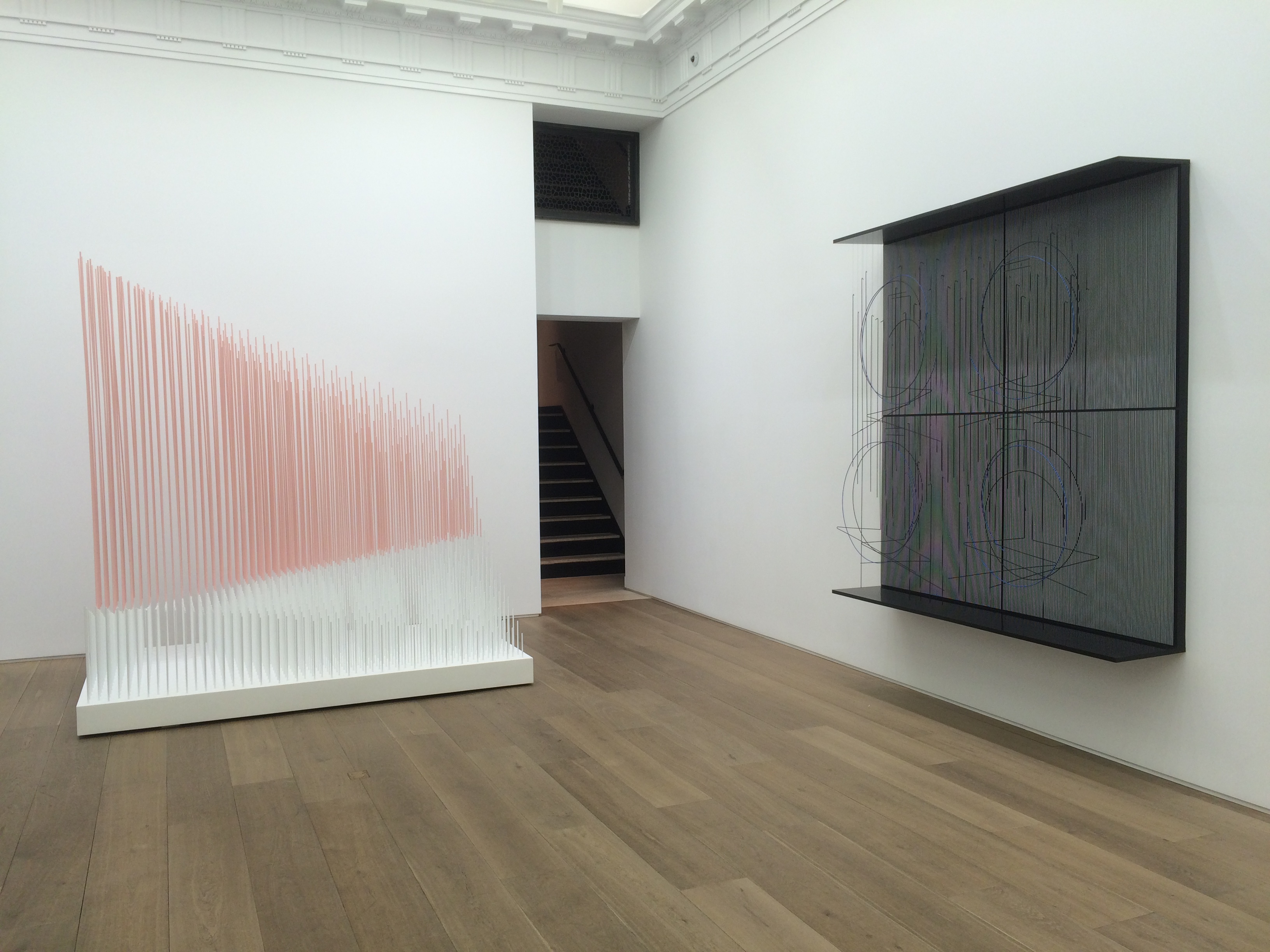 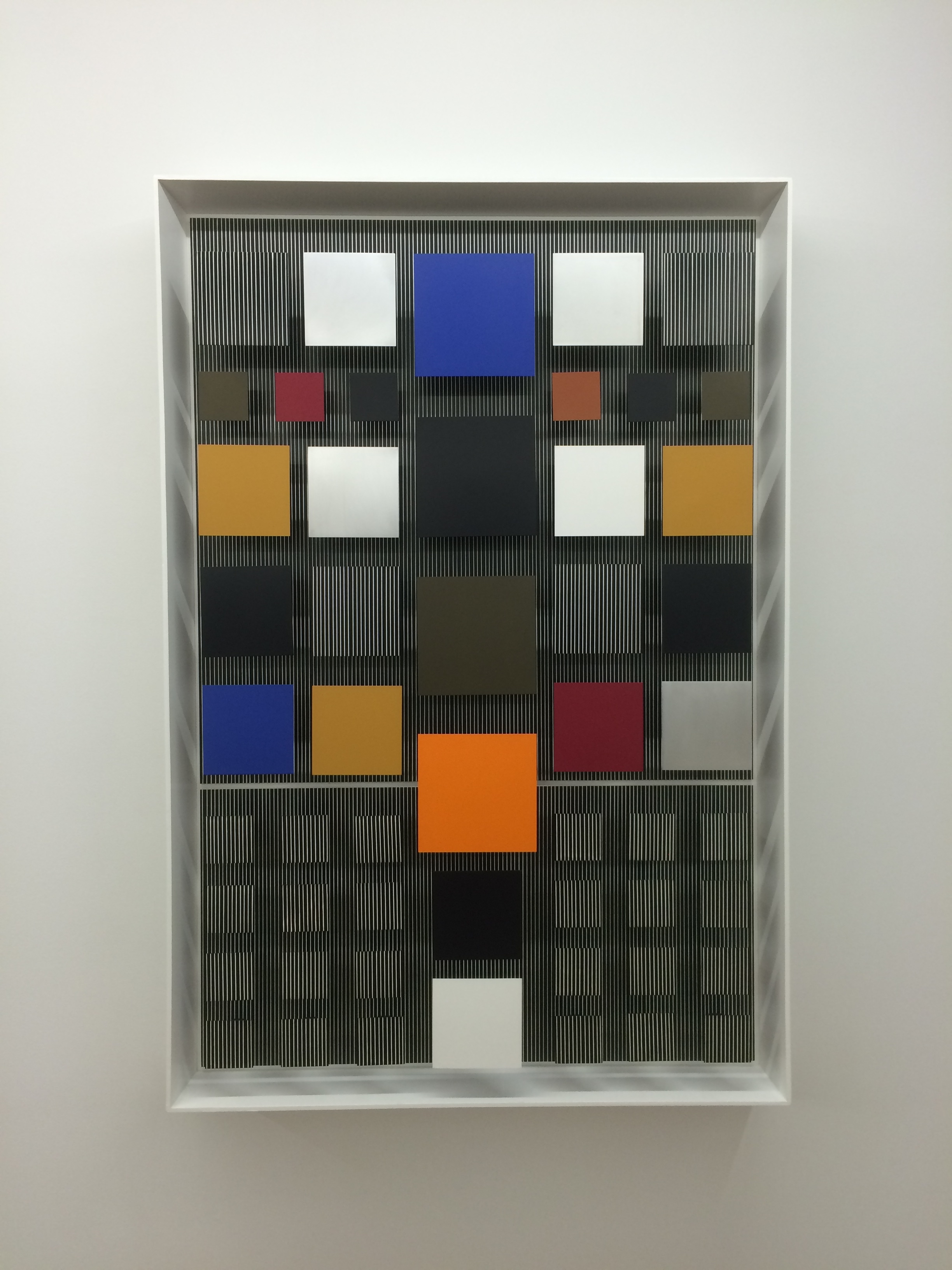 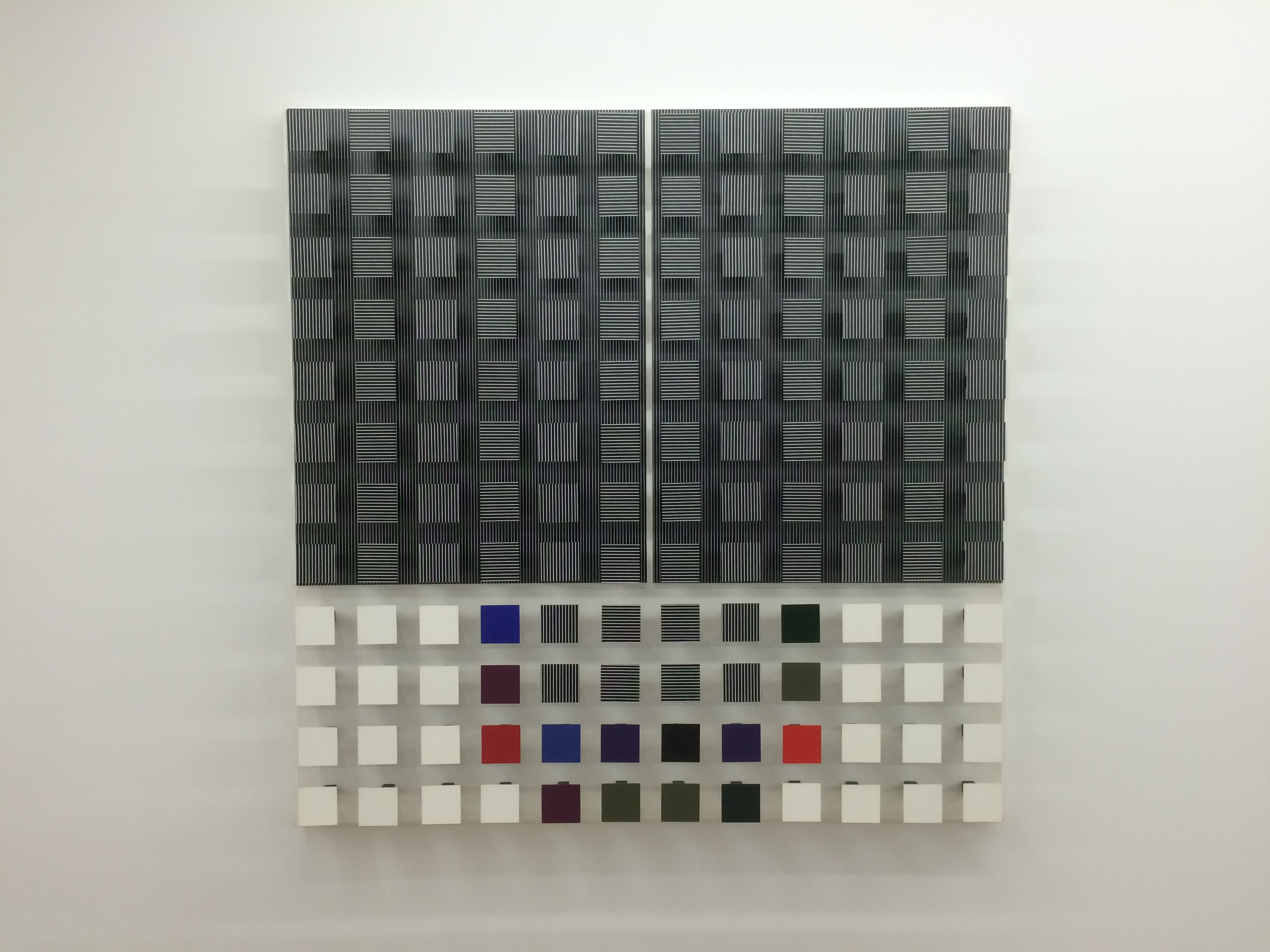 Seventh, Vera Lutter’s long-exposure camera-obscura-generated photographs of New York scenes. As she explains, “I darken the room” — whether her own apartment or a shipping container — “and set up the photo paper creating something like a stage for light to act. Now, whatever happens in the world outside of the room plays out on what I created. Then I sit back and let the world unfold, and whatever happens, happens.” These scenes-in-negative resemble the blueprints at Storefront — yet Lutter’s photos are “paintings-with-light,” recording “whatever happens in the world,” whereas the blueprint functions as a promise of changes to that external world — a statement of intention to intervene and alter it.

Eighth, a tremendous panel discussion on Agnes Martin at The New School.

Ninth, Assaf Shaham’s “Division of the Vision” at Yossi Milo. He takes August Sander’s typological portraits — Sander sought to create a “functionalist” photographic taxonomy of the of German people — and further abstracts Sander’s physiognomic notion of “type.” While Sander sought to capture the characteristic gestures, postures, clothing, and habitats of such folks as farmers, miners, tradesmen, and artists (with separate series for “the Woman” and “the Last People,” by which he meant the elderly, the deformed, and the dead”!!), Shaham takes the formal stereotyping to its extreme by reducing Sander’s subjects to pure silhouettes. He, like Christopher Williams, also examines conventions of looking — e.g., museological protocols — and technologies of image-making. “My assumption,” he says, “is that every appliance, material and mechanism predicts its user – so that the user is… already included in the instruction manual.” One series is composed of scans of other scanners scanning (how’s that for “meta”?). The result? Mondrian-esque color fields. 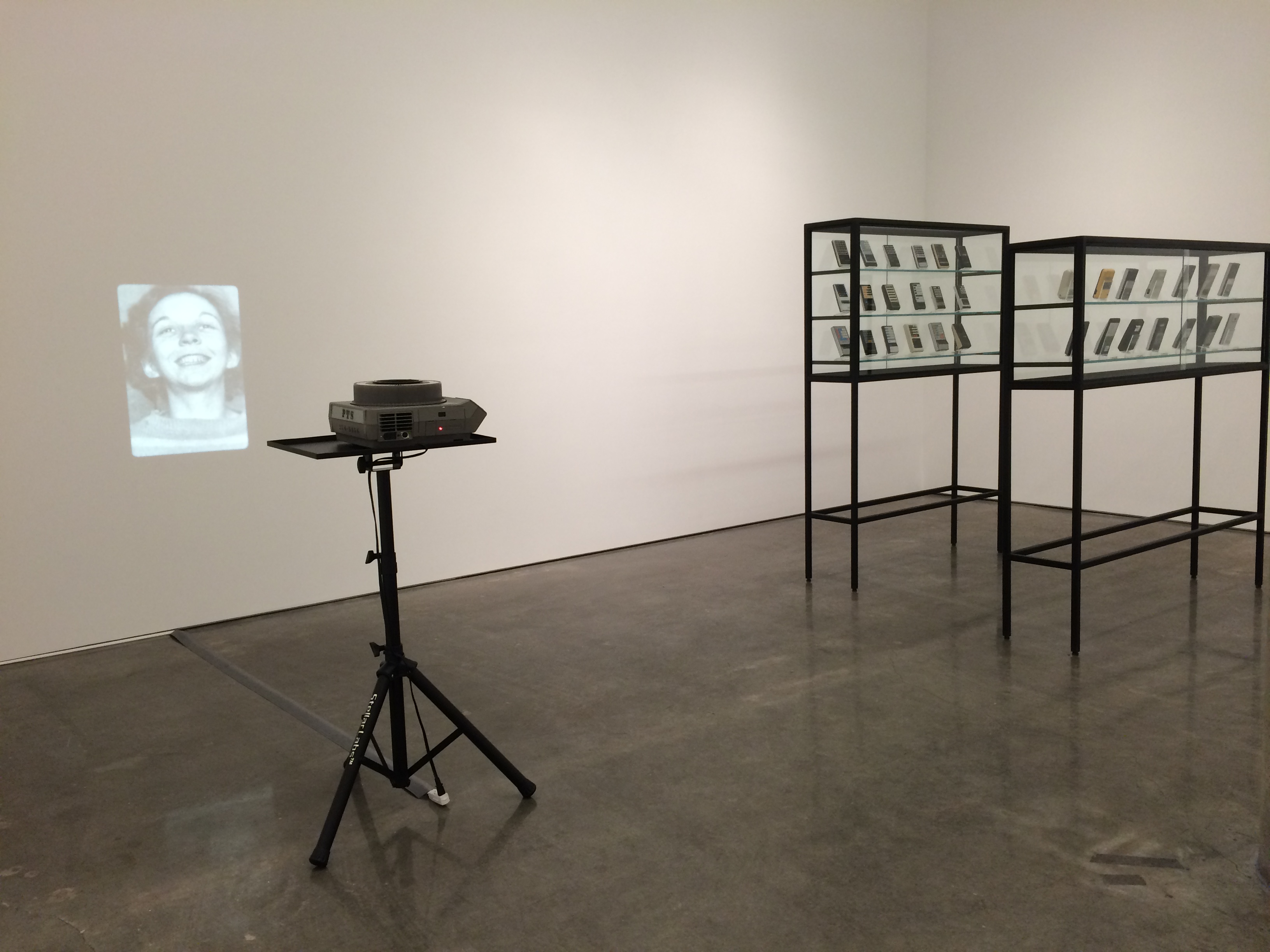 Tenth, Mike Nelson’s “Gang of Seven” at 303 Gallery: “a collection of sculptural assemblages made of materials for the North West Pacific Coast.” I imagined myself abandoned on an island, Castaway-style, striving to find order — often an anthropomorphic one — in the detritus that constitutes my only company. 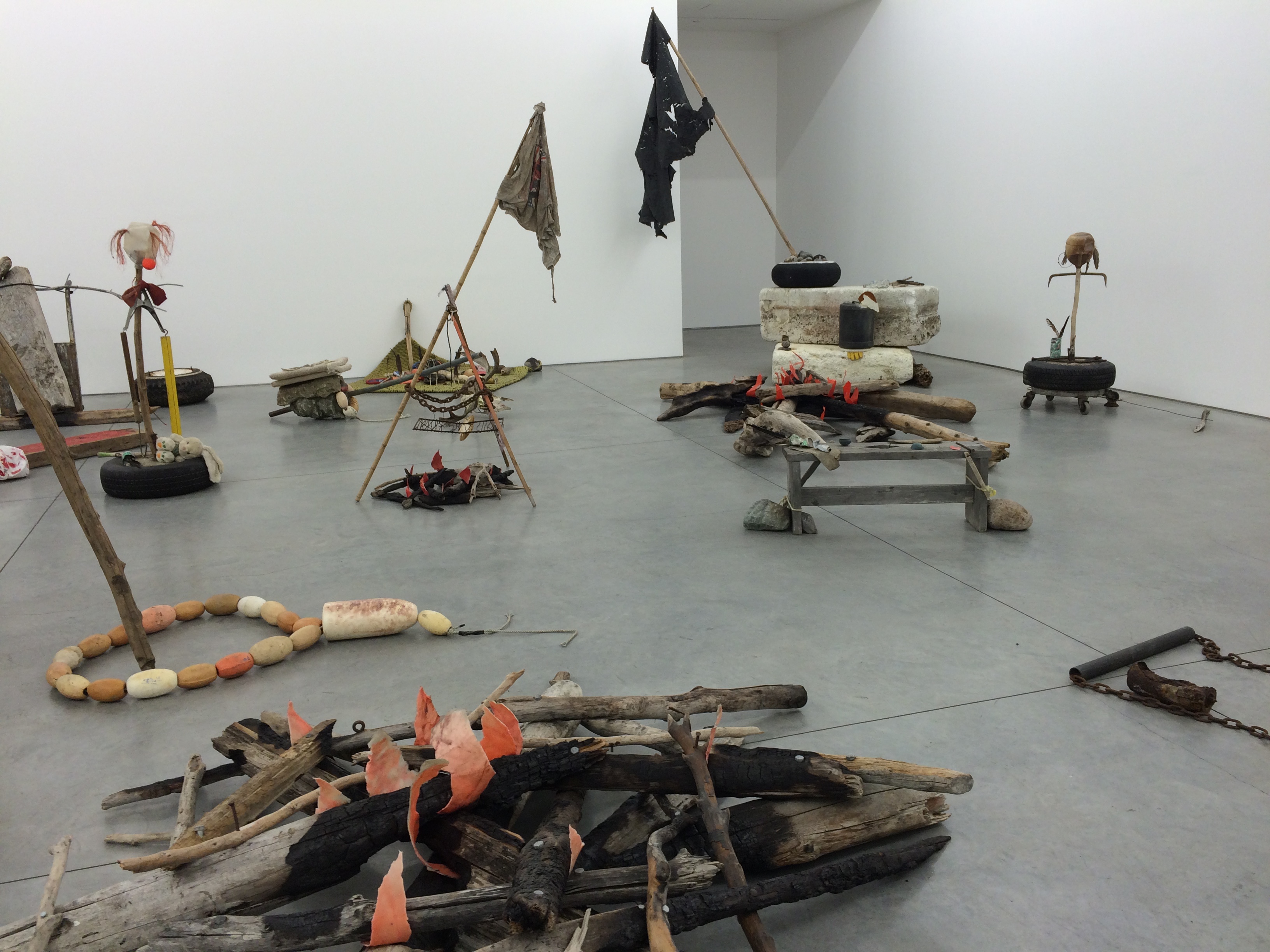 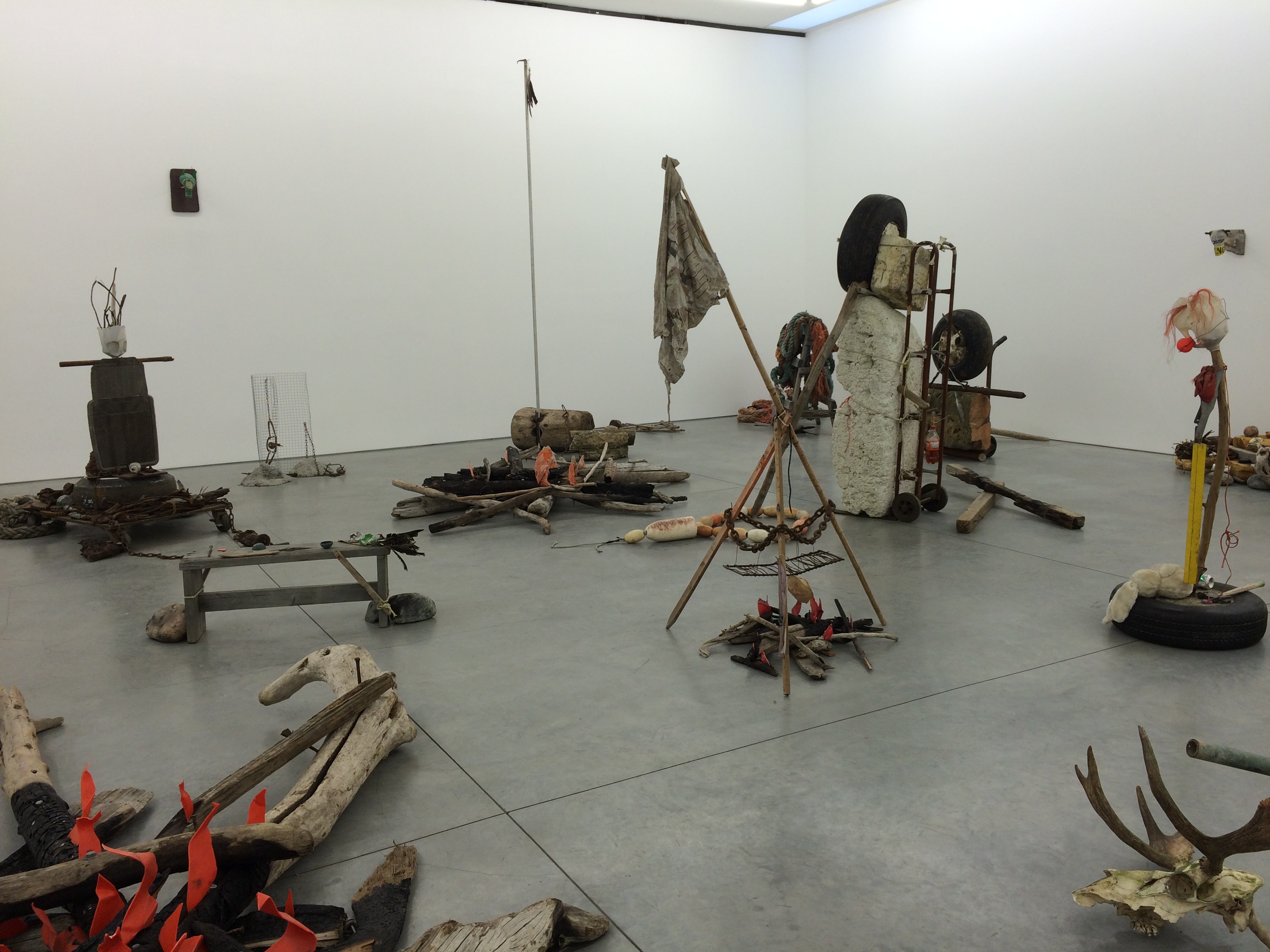 Eleventh, presaging themes present in Lutter’s and Shaham’s work: László Moholy-Nagy’s “Production/Reproduction” at Andrea Rosen. Here we see more tools and conventions of image-making and -consumption: slides, Leica cameras, and a disturbingly swastik-esque bench M-H designed for use in exhibitions.

Twelfth, Nam June Paik at James Cohan. Maybe we can think of Paik as the Moholy-Nagy of the televisual age. “The cathode ray tube will some day replace the canvas.”

Thirteenth, Alfredo Jaar’s “Shadows” at Galerie Lelong. Jaar examines the power of a single iconic image showing women grieving their father’s death amidst the Somoza oppression in Nicaragua. We’re led through darkened hallways, past “small sequential images that unravel the narrative,” and into a gallery featuring the iconic Koen Wessing image, blown up to wall-size. The photographic details then begin to fade away, and the two women in the photo are reduced to silhouettes (we saw this earlier in Shaham’s work). The outlines of their bodies become containers for increasingly intense — ultimately, painfully intense — light. The image thus represents pain, in the form of its grieving subjects, and also triggers physiological pain among Jaar’s viewers. 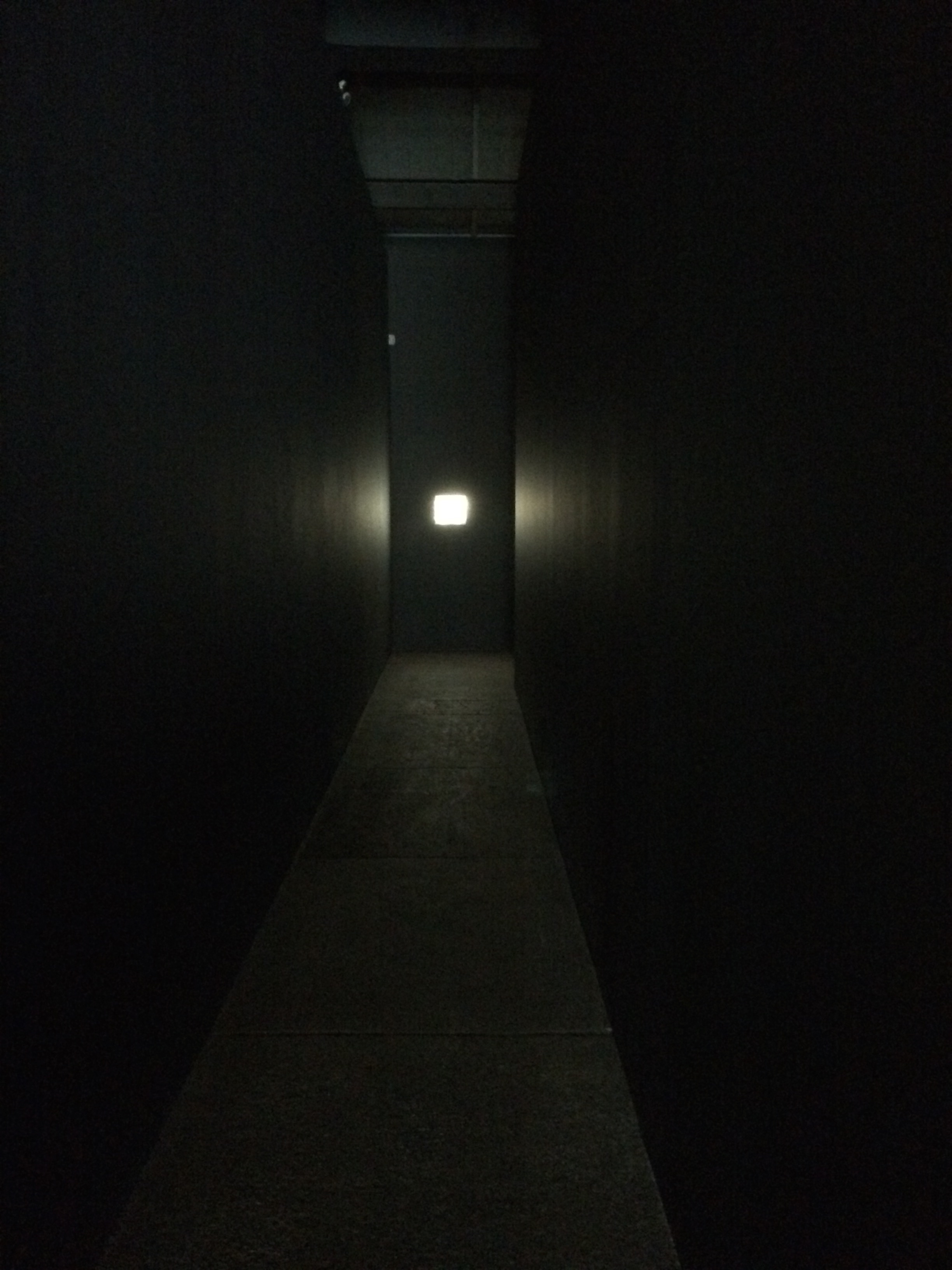 Fourteenth, James Benning and Peter Hutton’s “Nature is a Discipline” at Miguel Abreu. Here we see two illustrious filmmakers, long devoted to 16mm film, rethinking their practice — but not compromising on their disciplined attention to landscape — for digital formats and gallery (as opposed to theatrical) exhibition, here in three triptychs. 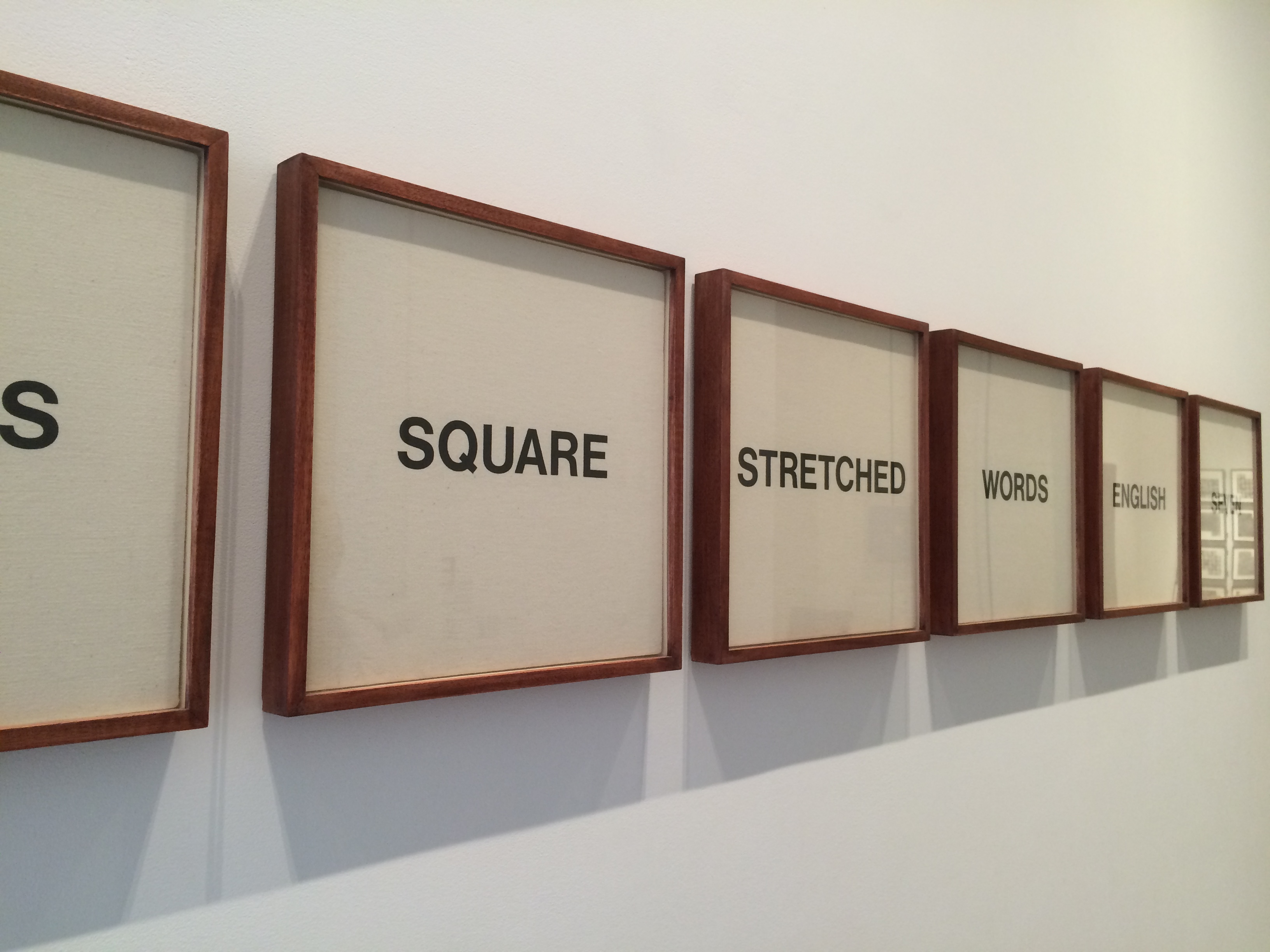 Sixteenth, Jeffrey Beebe’s brilliant “The Battle of the Invoked Impossibility” at BravinLee: “monomaniacal maps, diagrams, genealogical charts, portraits, and other pseudo-archival ephemera. All of these drawings explore Refractoria, an imagino-ordinary world surmised to be equal parts memoir and pure chimera.” 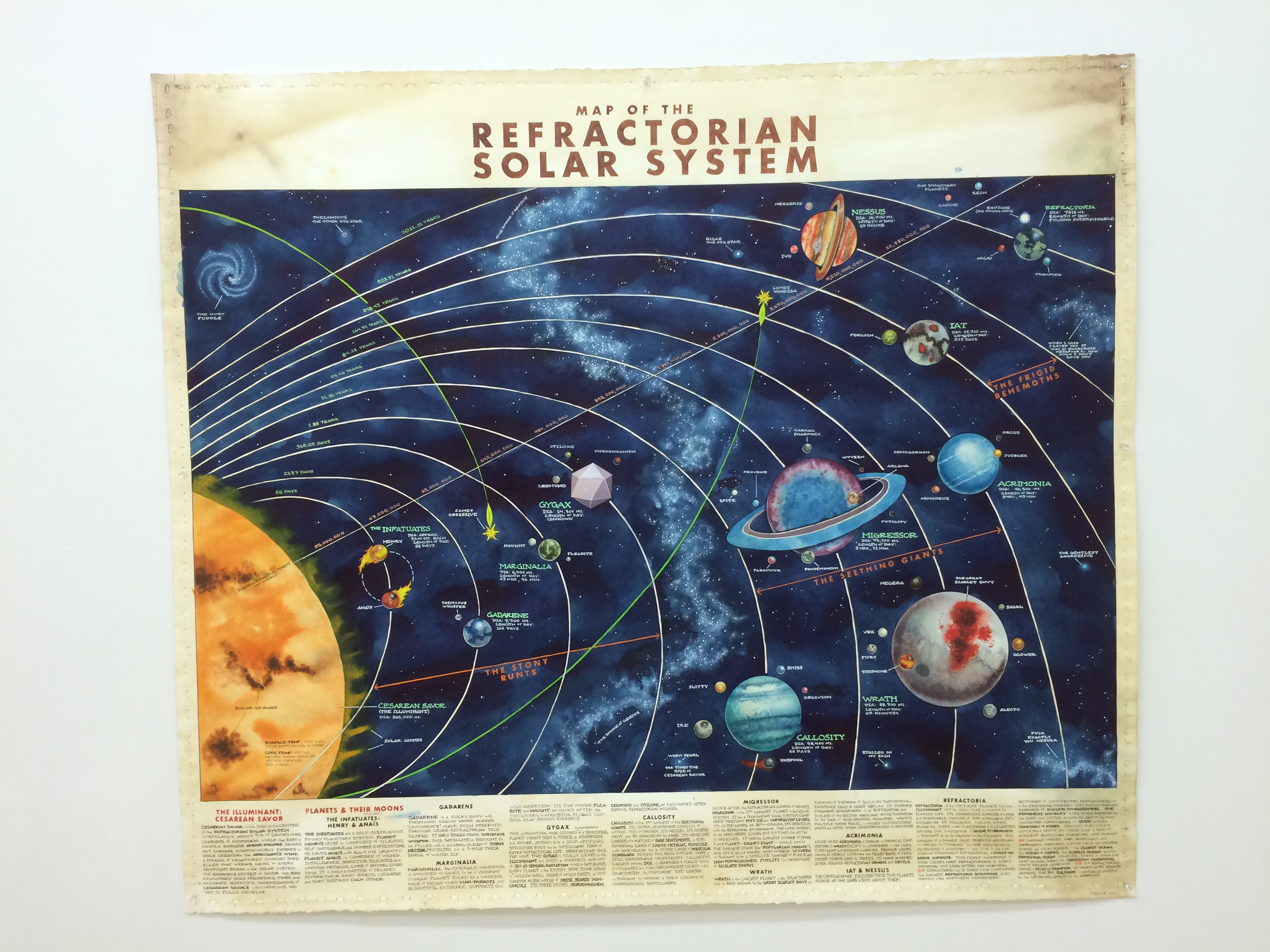 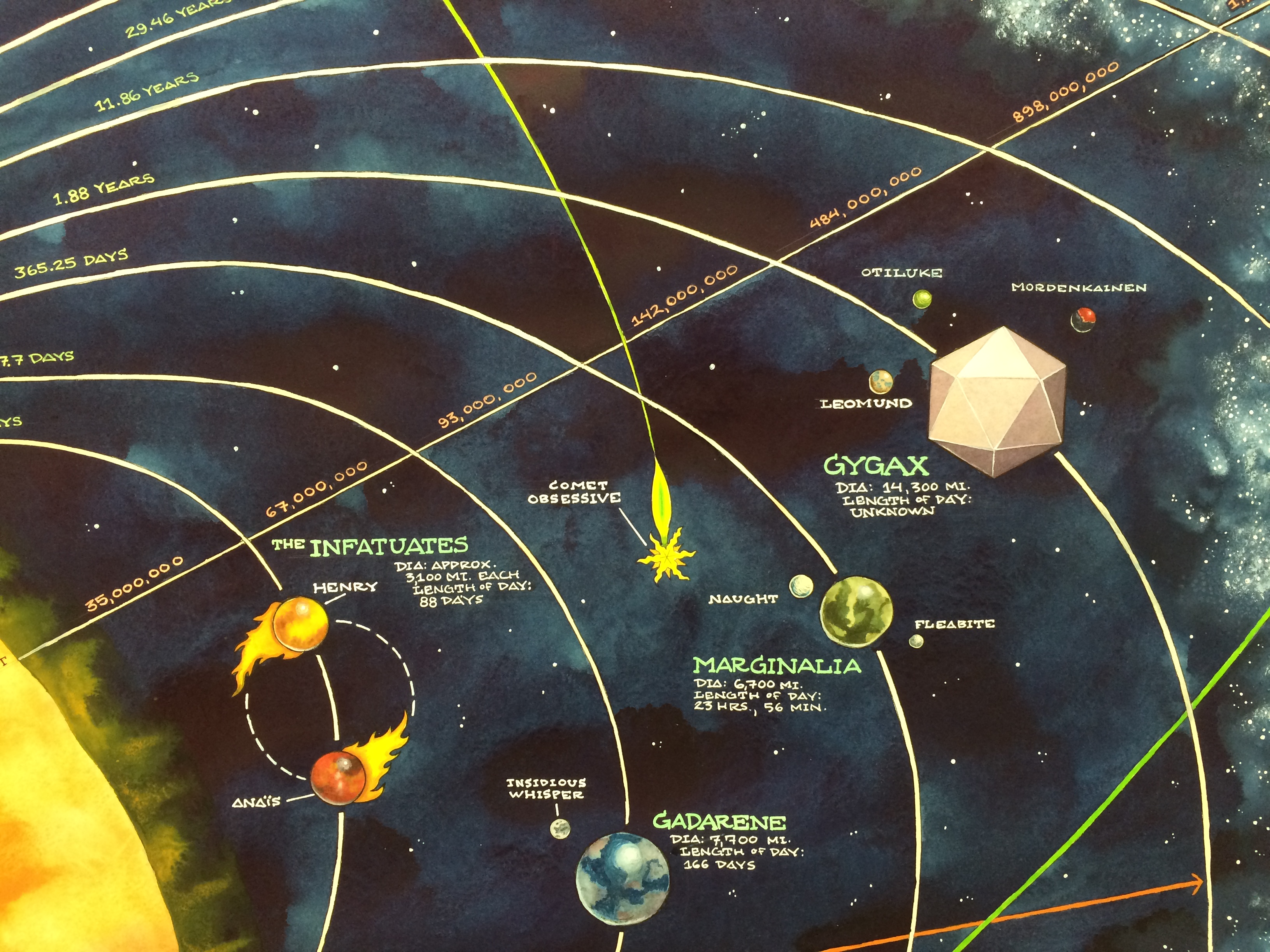 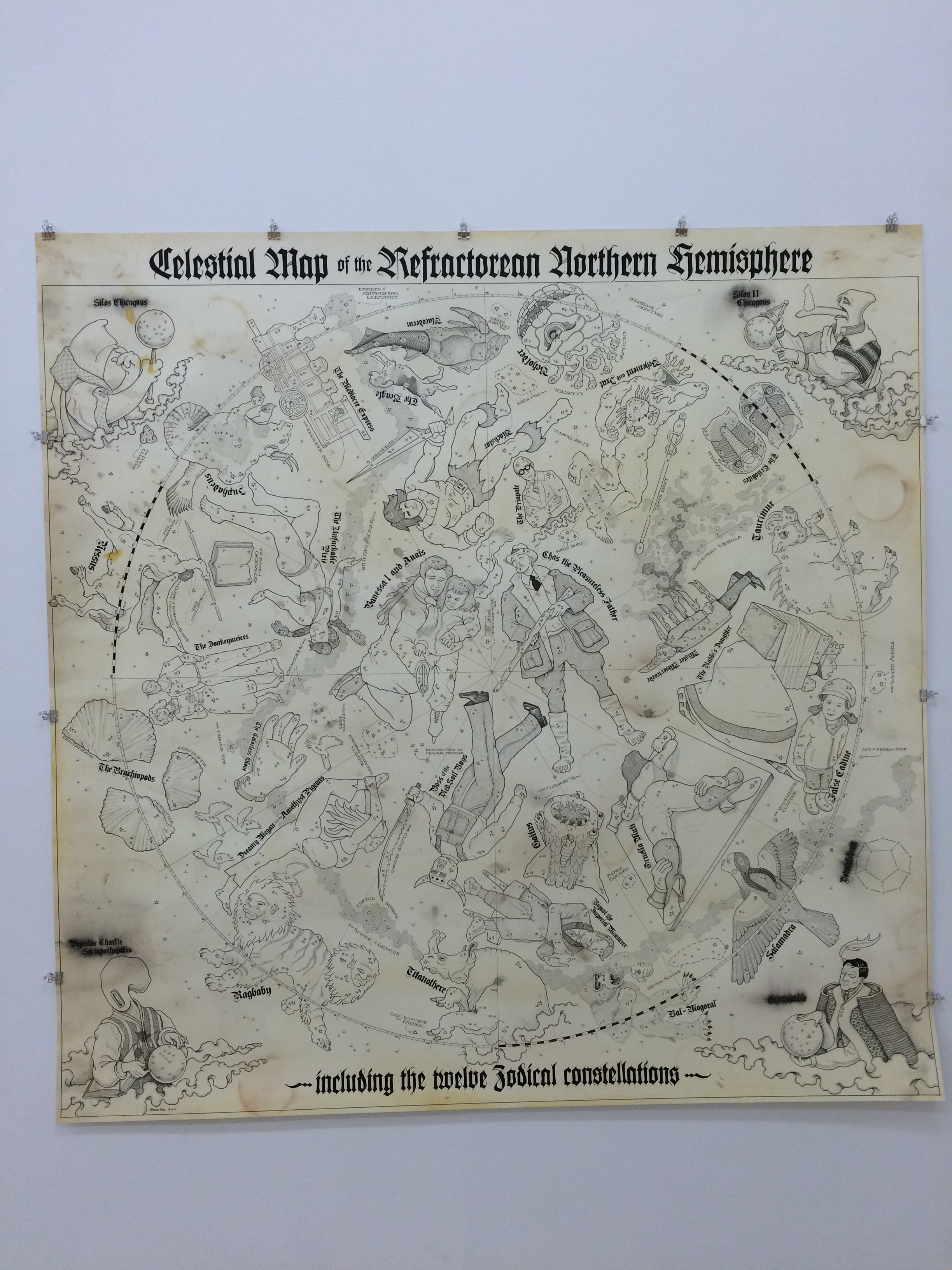 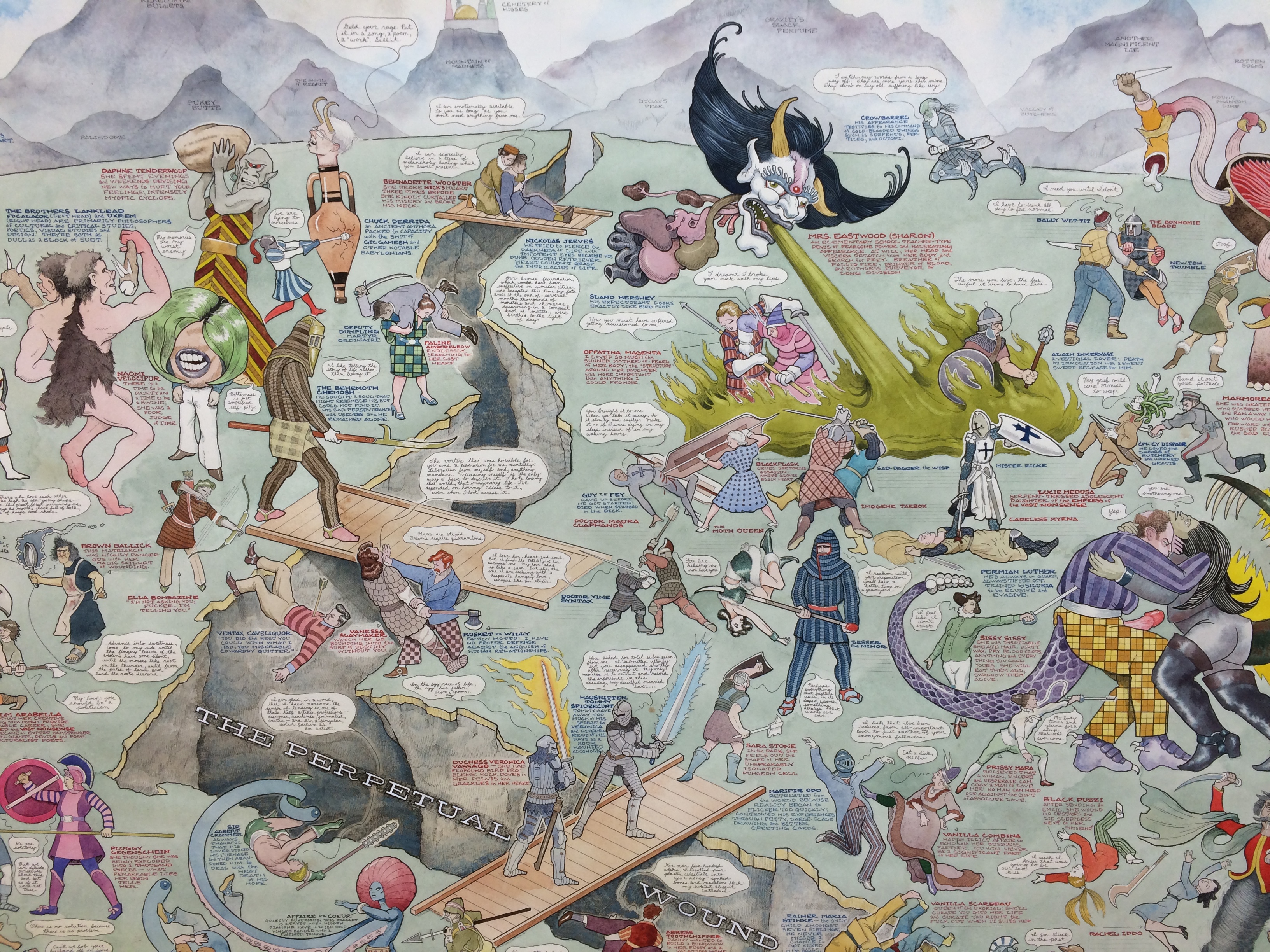 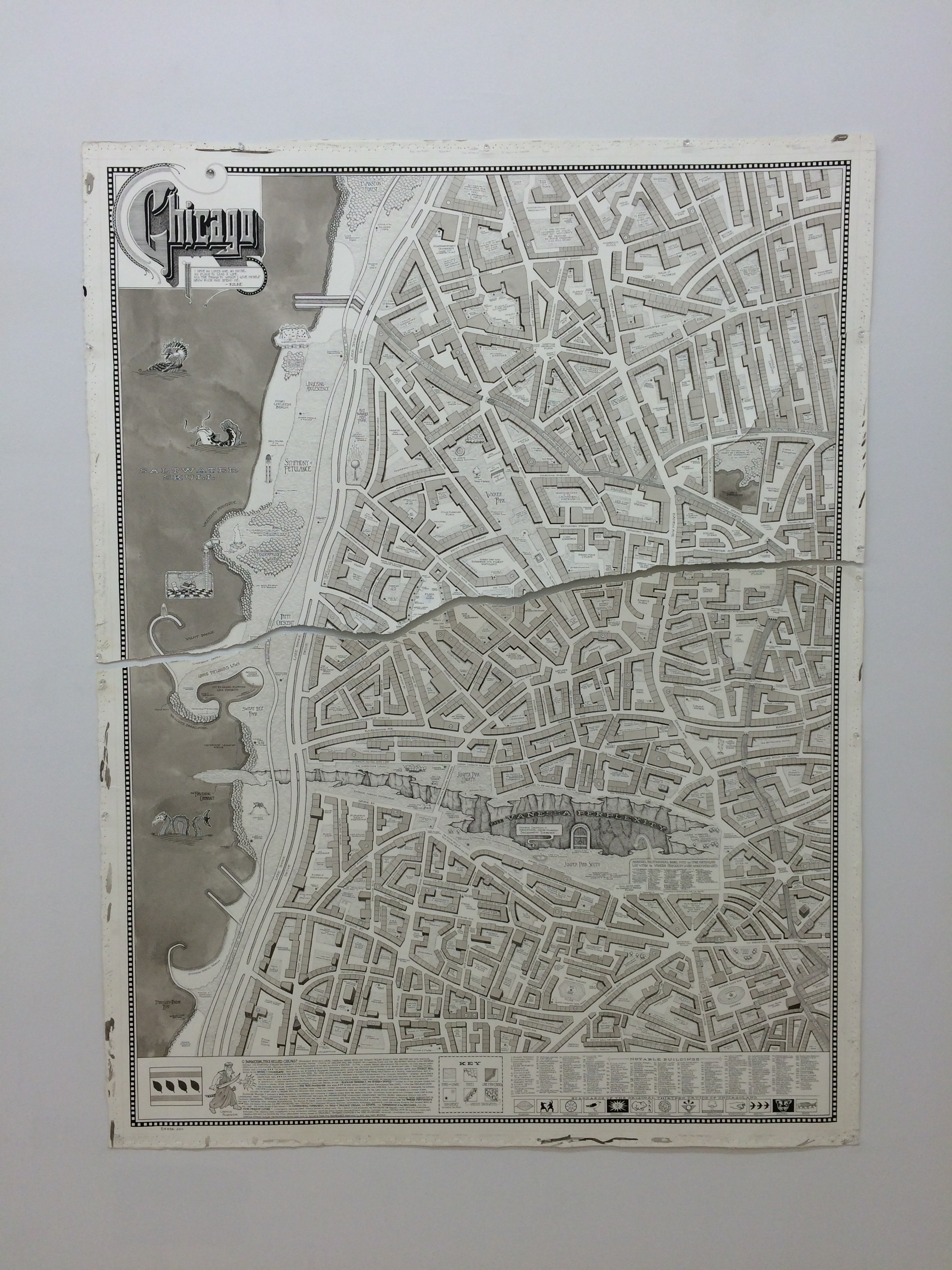 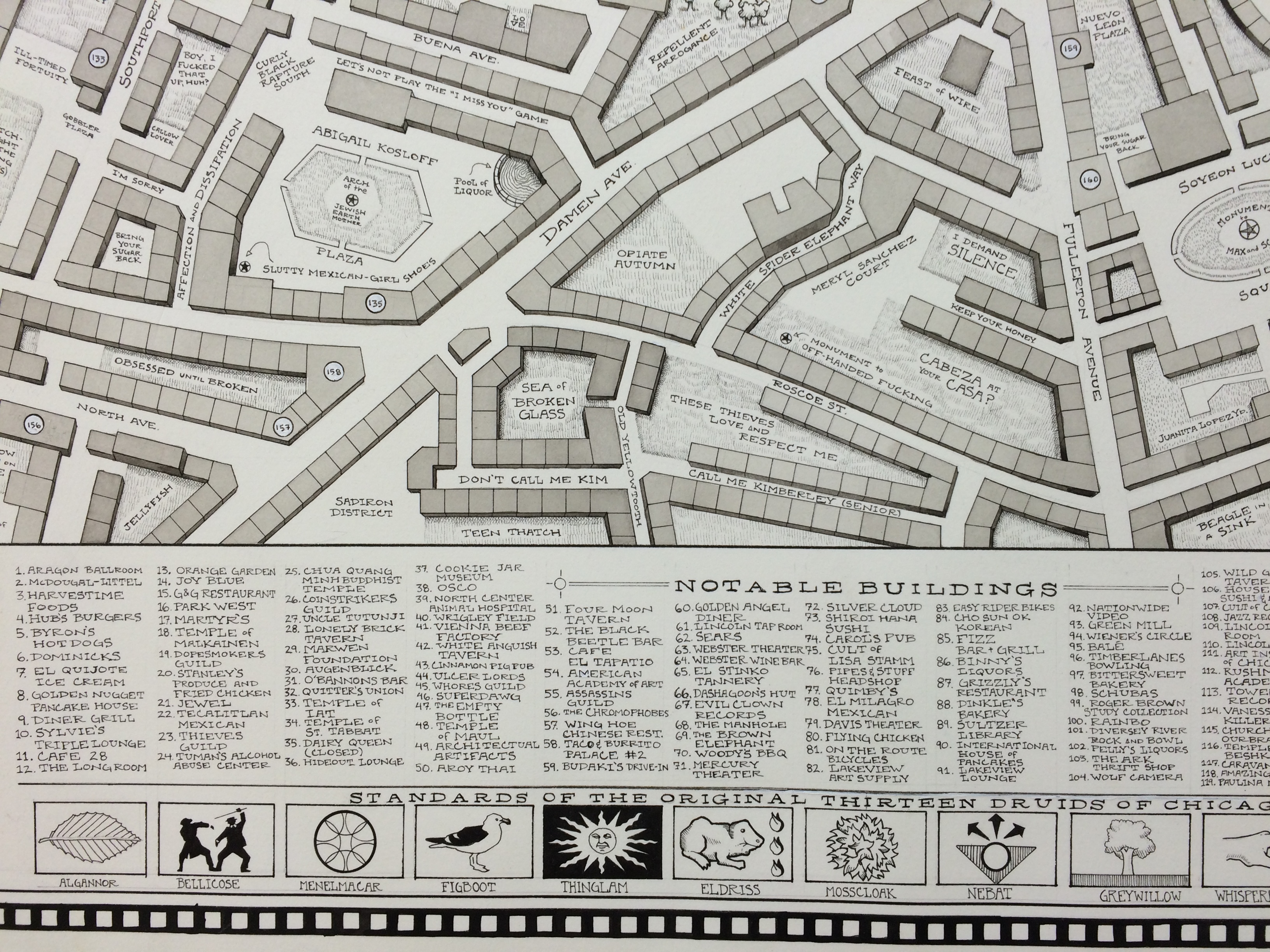 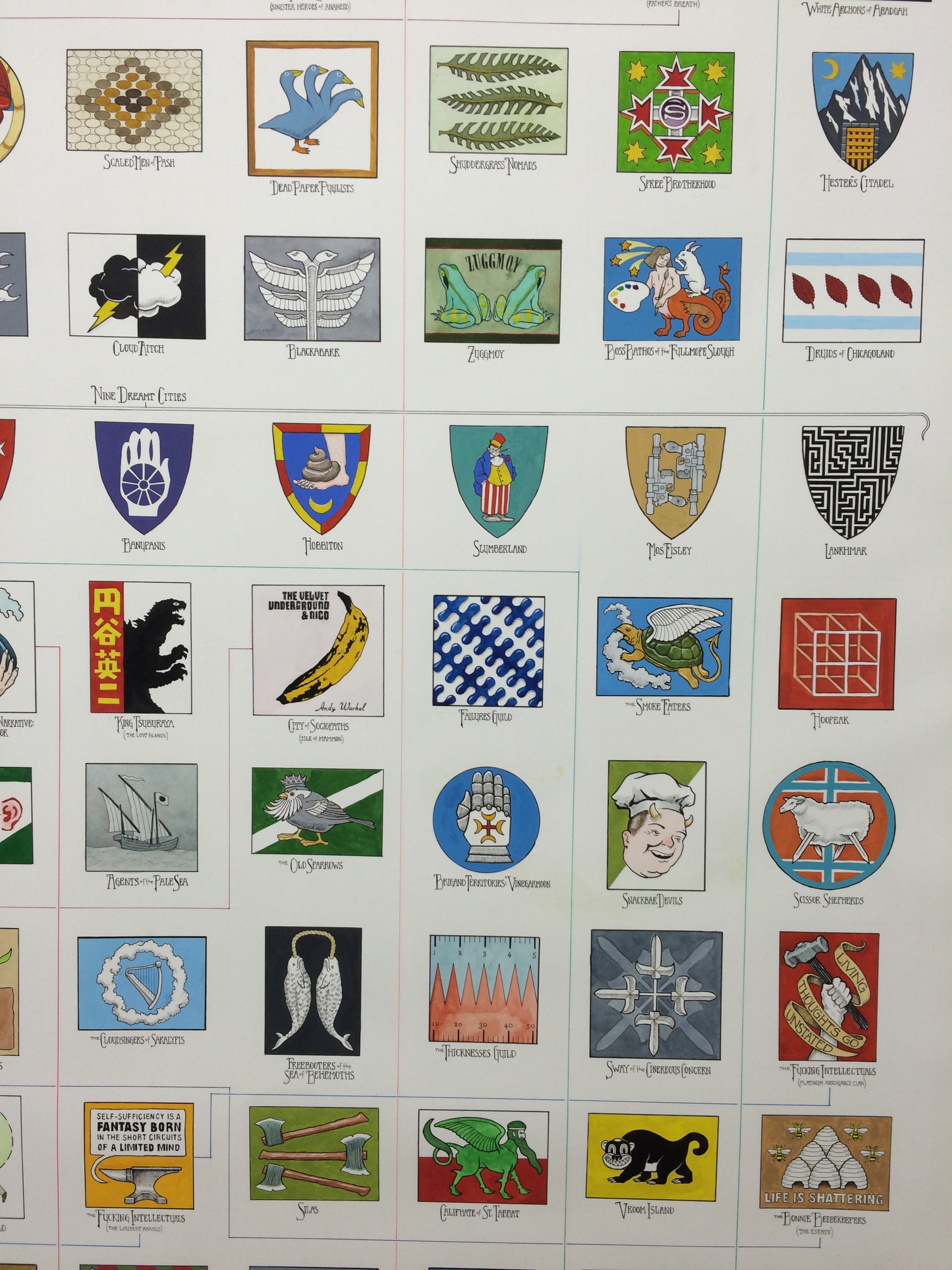 Finally, seventeenth: Zimoun’s [KE]3 @ bitforms. I’ve been teaching Zimoun’s work for years, but, until now, I hadn’t experienced it in-person. The bitforms show is only one of three exhibitions of his work currently on display in New York, and it was unfortunately a rather underwhelming first act: most of the most promisingly provocative pieces — those with tiny cubbies and dozens of moving parts — were out of order. Yet those that were functional demonstrated, with such delicacy, what a satisfying sound results when felt-wrapped-balls-on-oscillating-arms tap the sides of tiny cardboard enclosures. The meeting of those materials generates such a gratifying flutter of bitsy thumps. Onomatopoeia fails me.