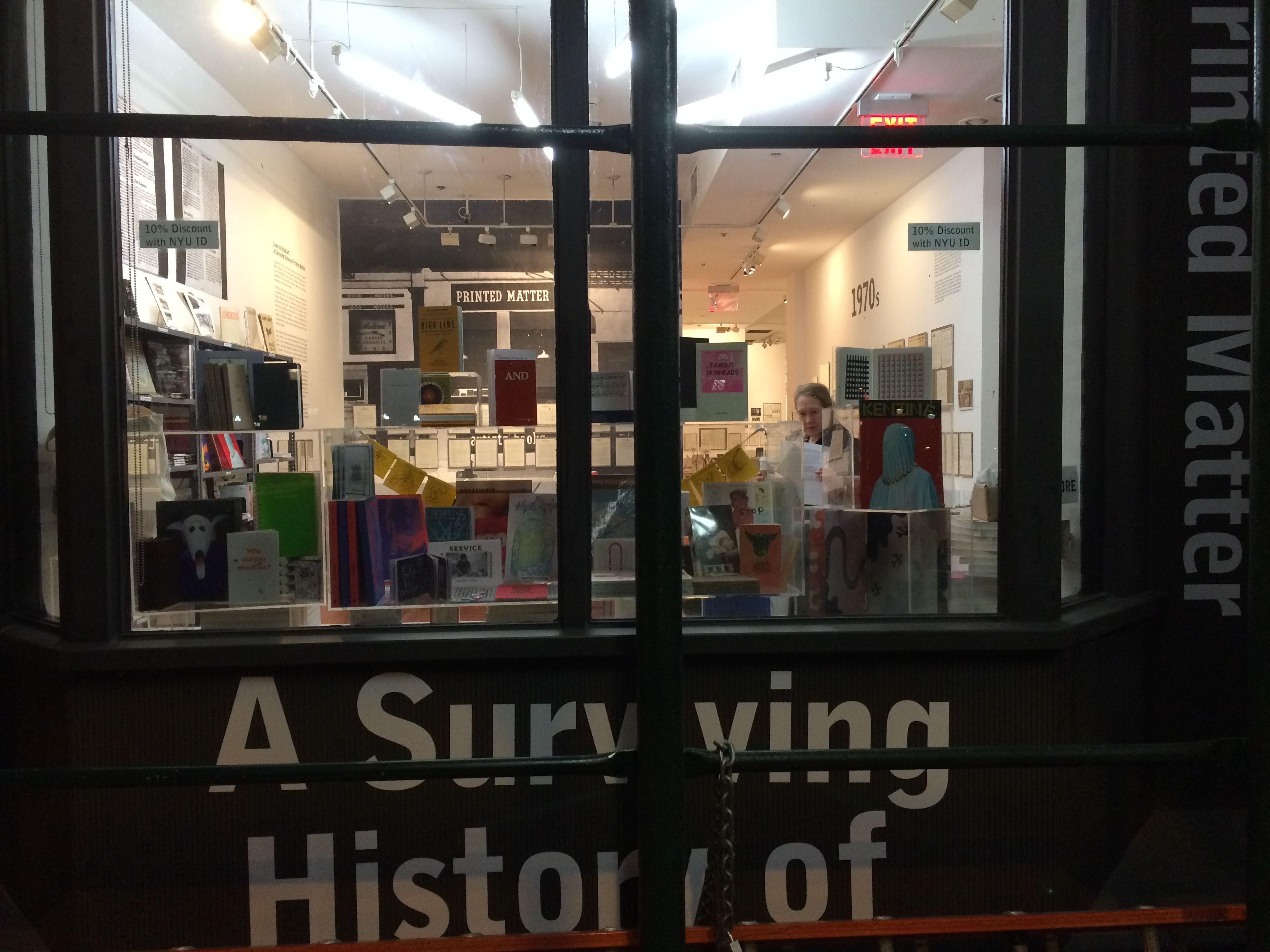 I’ve seen a few exhibitions over the past few weeks, and a number of connecting threads have emerged: scripts + reading, scores + sound, navigation, and science fiction. (For some reason I seem to have had no sense of humor when writing this post. Apologies for my uncharacteristic stodginess.)

I began with the fantastically overwhelming “Learn to Read: A Surviving History of Printed Matter” at NYU’s 80WSE. The sheer volume of texts — all of Printed Matter’s printed matter — attests to the continuing vibrancy in the world of (small) publishing, and suggests that, despite the ascendance of the e-reader, words-on-paper still have their place. As the gallery explains:

The exhibition presents a transparent timeline of Printed Matter’s recovered archive, including administrative documents, programming ephemera, and publishing projects, the exhibition presents a cumulative biographical portrait of the struggles of an organization committed to meeting the ever-changing need for alternative art economies, modes of production, presentation, and dissemination. These historical materials are framed by two additional major components of the exhibition: a satellite location of their bookstore and a fully equipped print shop, housed within the gallery, which will serve as the site for artist publishing residencies by artists Mary Ellen Carroll, Jesse Hlebo / Swill Children, Juliana Huxtable, Red76, Research and Destroy New York City, and Josh Smith & Friends. 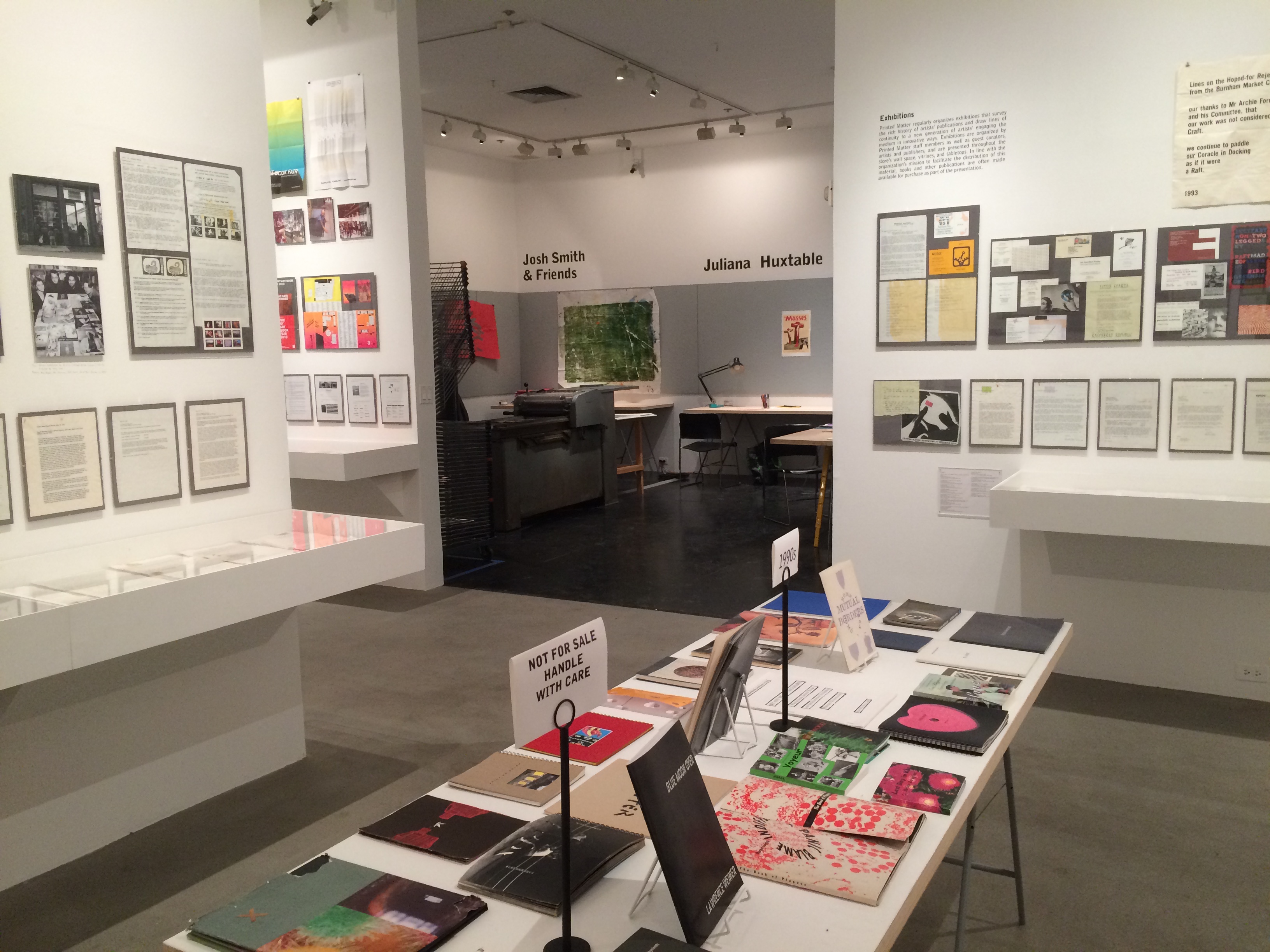 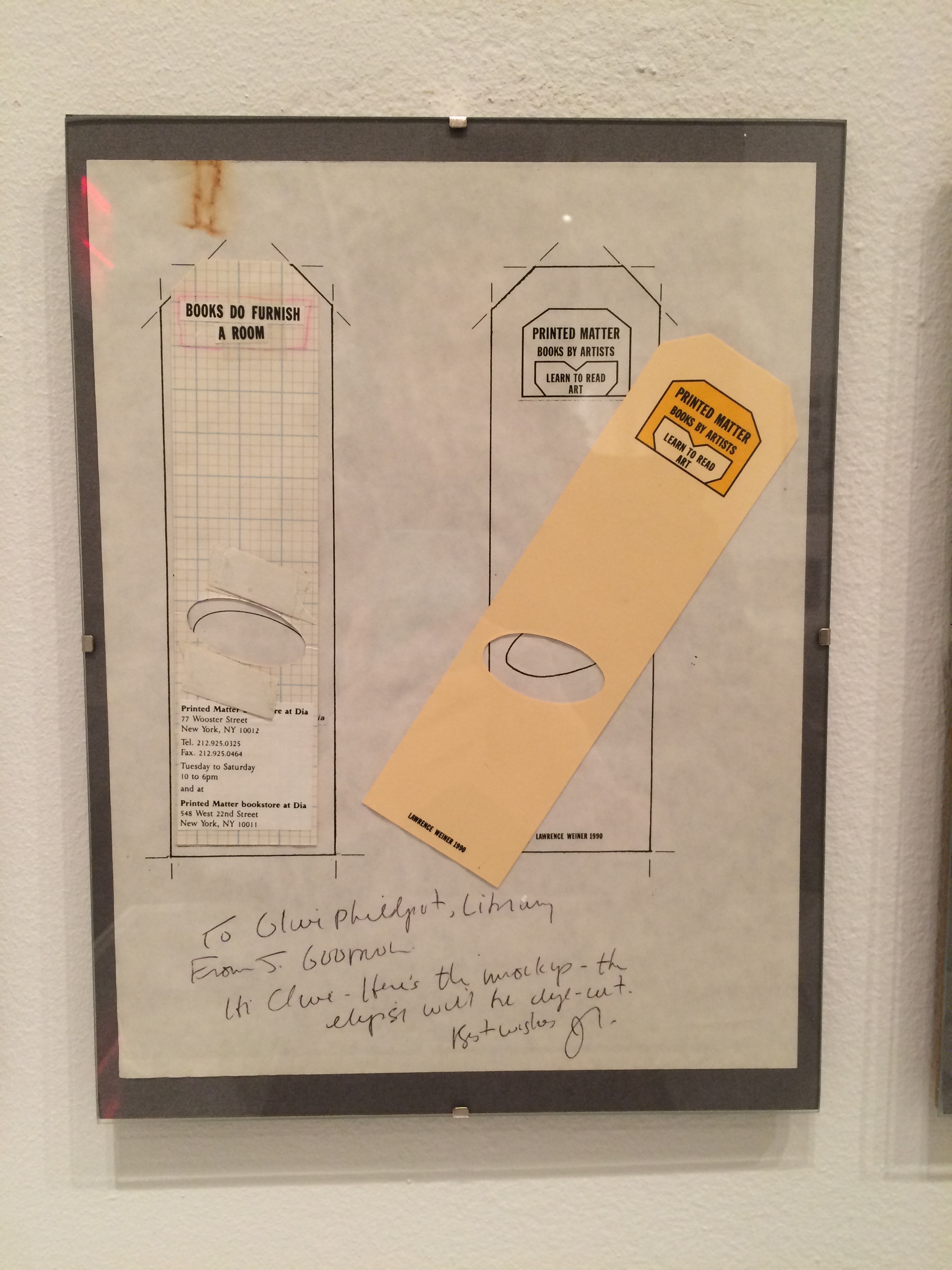 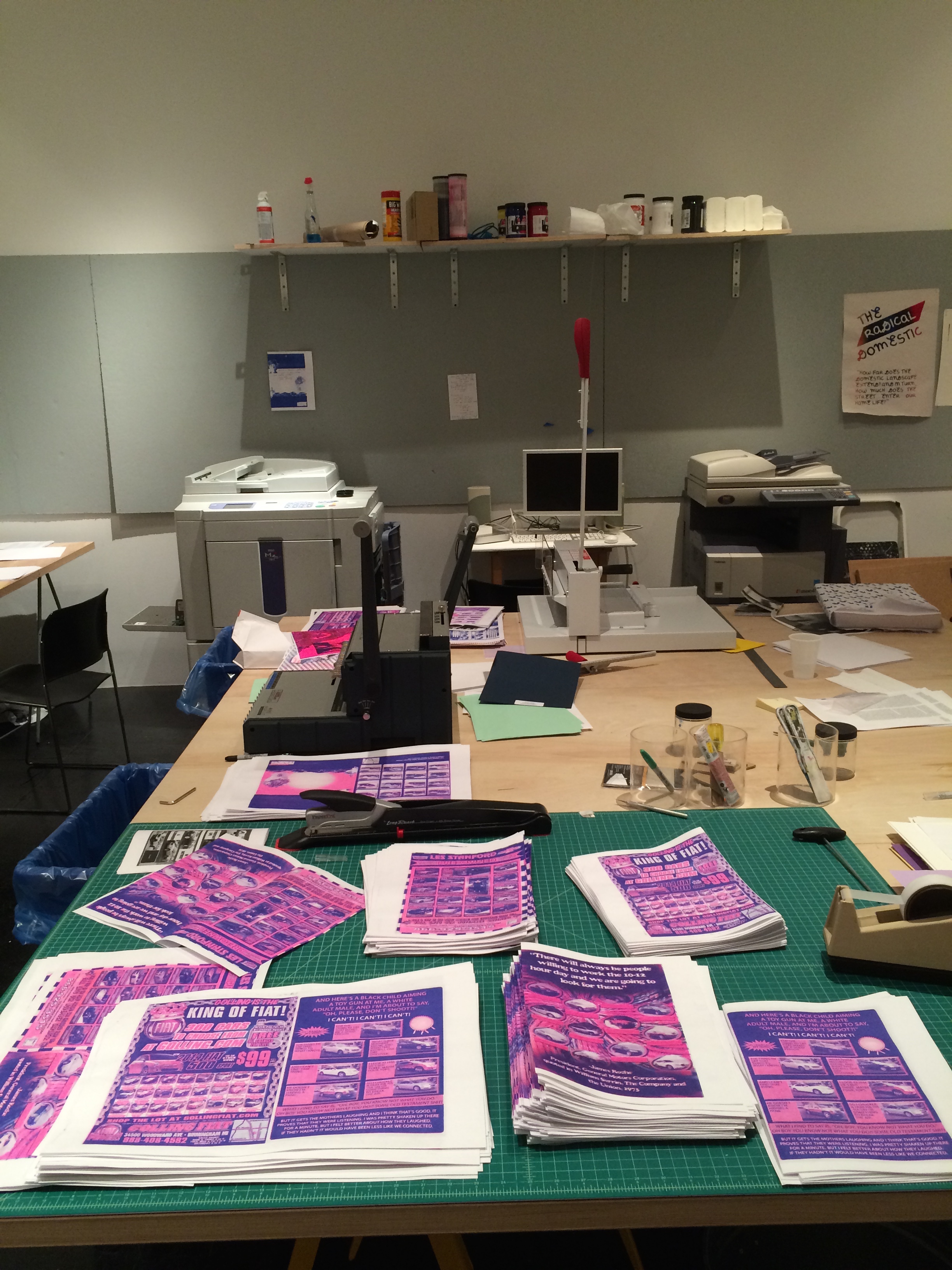 I moved on, then, to Dutch photographer Reinier Gerritsen’s “The Last Book” — photos of public, analog reading — at Julie Saul. His photos show people suspended between two worlds: the crowded, smelly, bodily cacophony of the subway; and the visual, tactile, and imaginative universe of the page. With more and more commuters toting e-readers and obliviously lost in their screens, perhaps, he seems to be suggesting through his exhibition title, these analog readers are an endangered species. 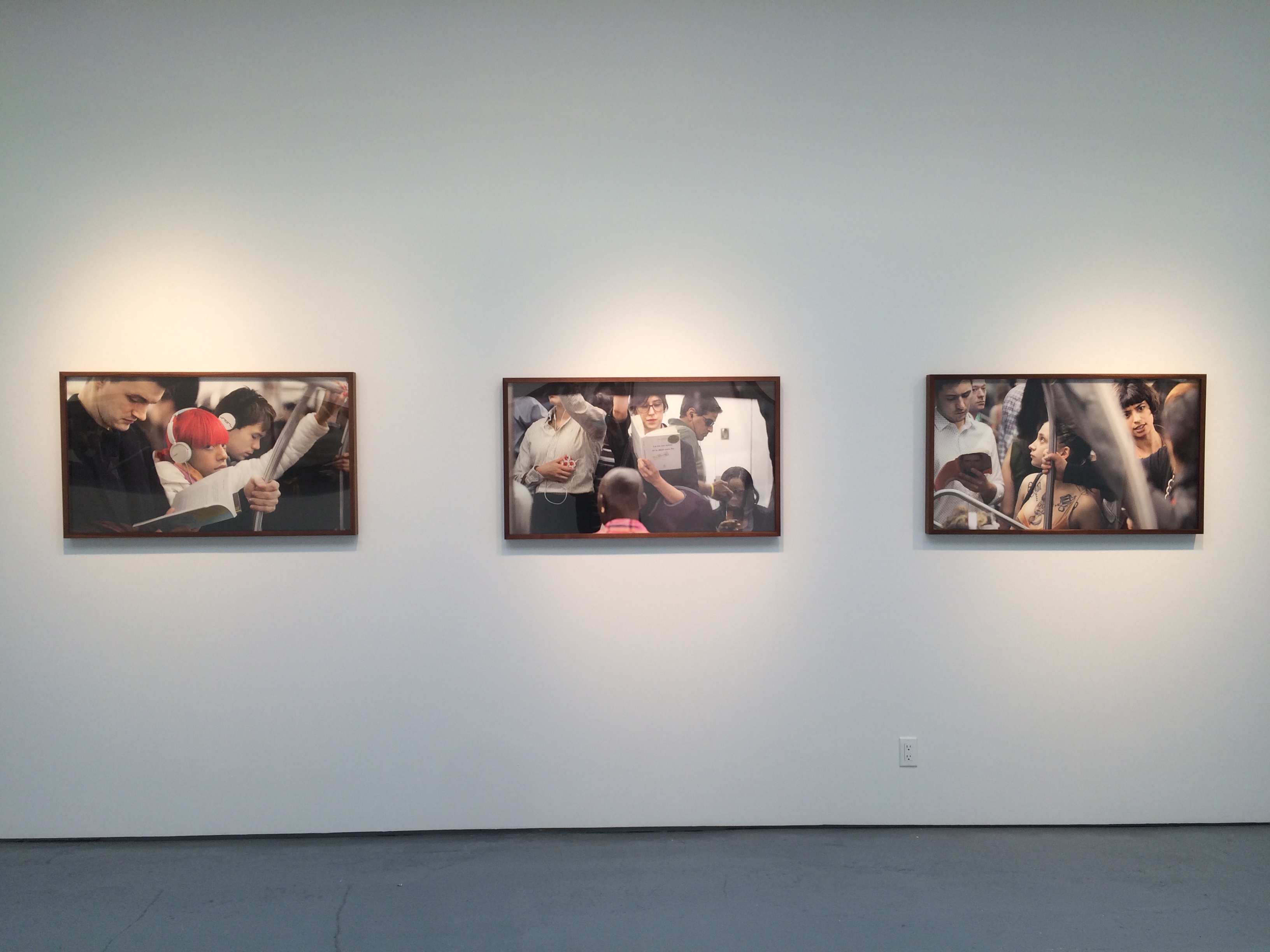 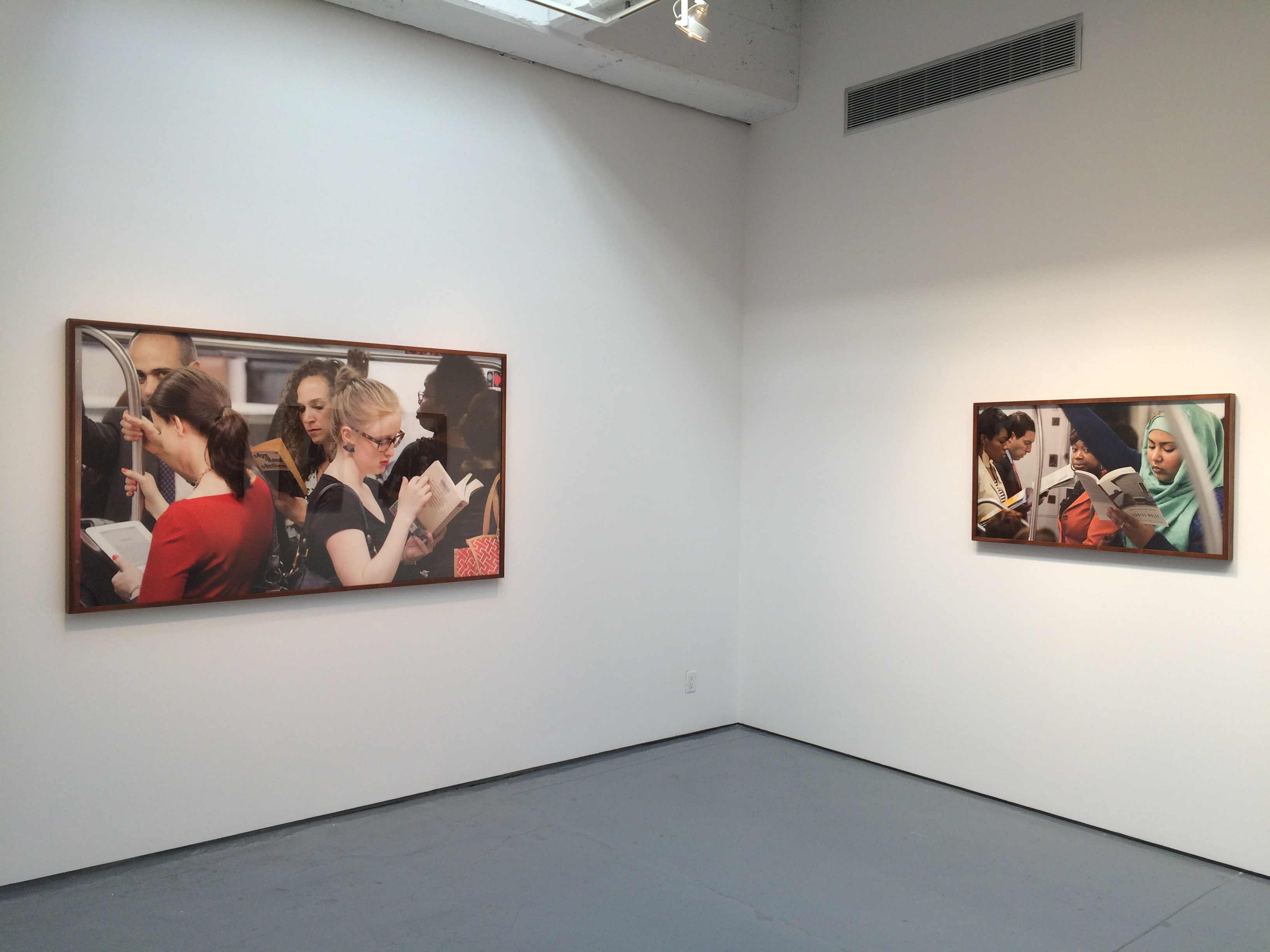 Then, at Hasted Krautler, I enjoyed the work of another Dutch photographer, Erwin Olaf, who explores endangered rituals. His “Waiting” series examines the various psychological conditions — anticipation, disappointment, boredom — associated with the liminal state of “waiting.” As Olaf explains, waiting is an “odd place in-between two emotions” — yet now that “everybody…has a phone or an iPad that connects them to the world,” the wait has become an endangered place. As the gallery states, eloquently, “it is here, in the moments where nothing explicitly ‘happens,’ that the majority of life takes place.” 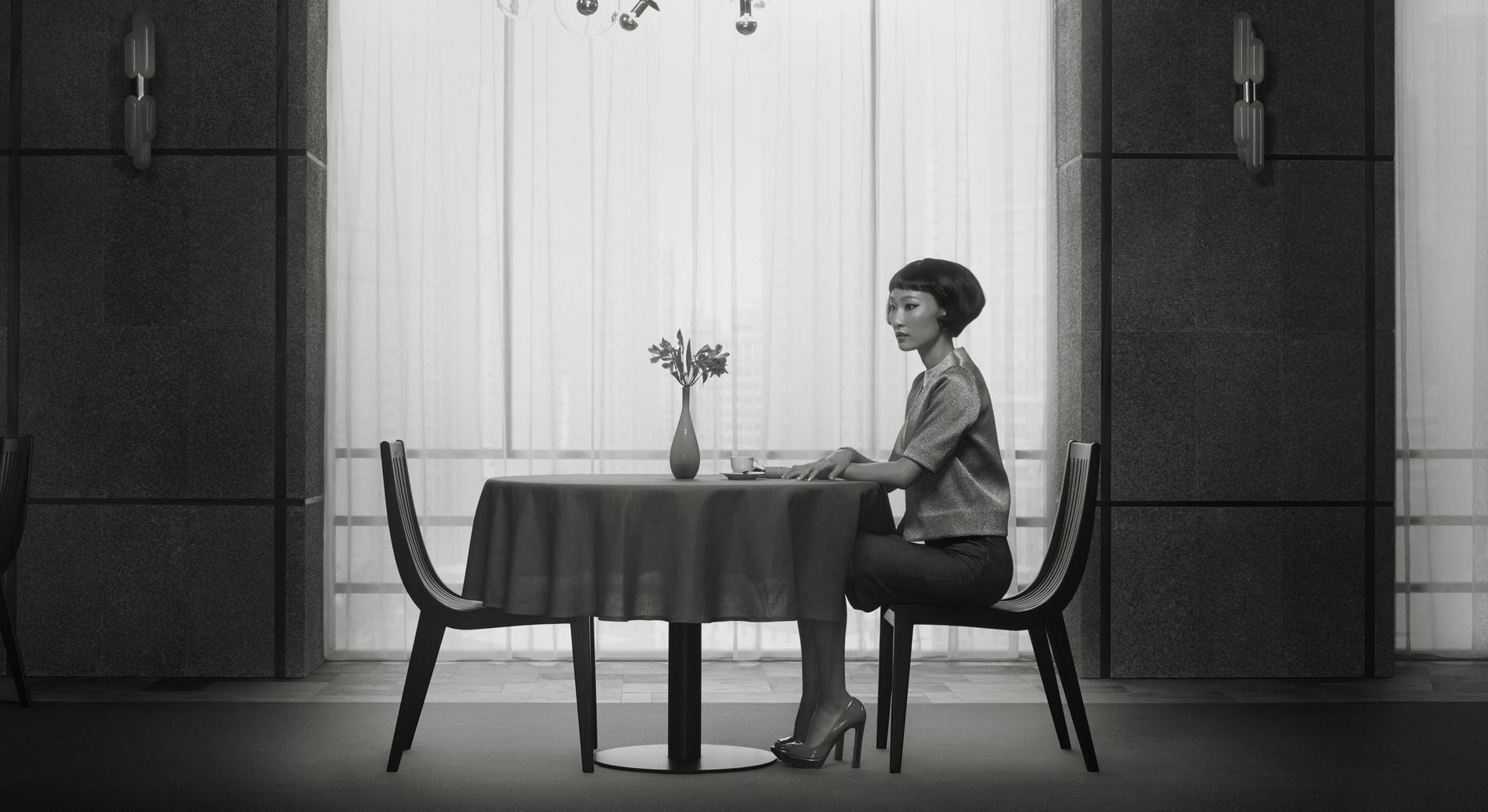 Meanwhile, Cy Twombly’s “Treatise on the Veil (Second Version)” at the Morgan Library creates a visual and textual landscape that, thanks to its scale, can’t help but absorb the viewer; one has to walk along the piece, whose left and right edges are “signposted” with scribbled directions: “in” and “out.” Twombly conceives of the work as a “timeline without time.” The 33-foot piece was supposedly inspired by “The Veil of Orpheus,” a musique concrète composition by Pierre Henry that features the sound of cloth being torn; and by a Muybridge photo of a veiled woman. Muybridge was, of course, known for his studies of movement via stop-action photography. Also on display are a series of drawings and collages, studies for the larger piece that themselves embody an array of tears and sutures and modalities of concrete composition. Hyperallergic has a substantial post about the exhibition. 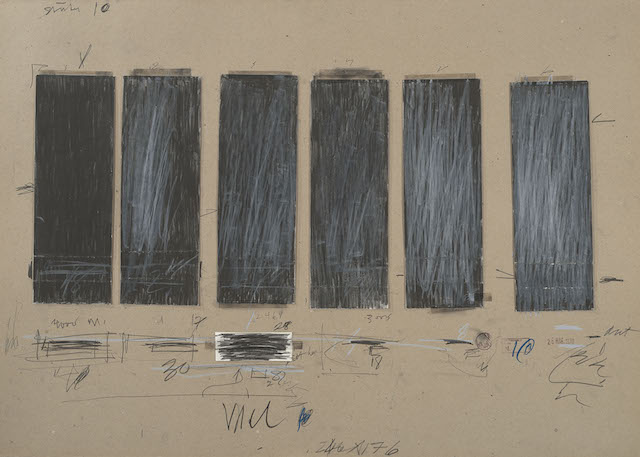 Susan Philipsz’s “Part File Score” @ Tanya Bonakdar likewise integrates sonic and graphic inspirations. The installation features a 12-channel audio composition for solo violin, based on Hans Eisler’s compositions for film. Eisler fled Germany for the U.S. to escape the Nazis, and, while in LA, was blacklisted and eventually deported. The audio piece is accompanied by a series of prints featuring Eisler’s hand-edited scores, onto which are superimposed his FBI files, which are themselves “edited” via redaction. These themes of loss and exile and echoed in the solo violin, a single part extracted from larger compositions. 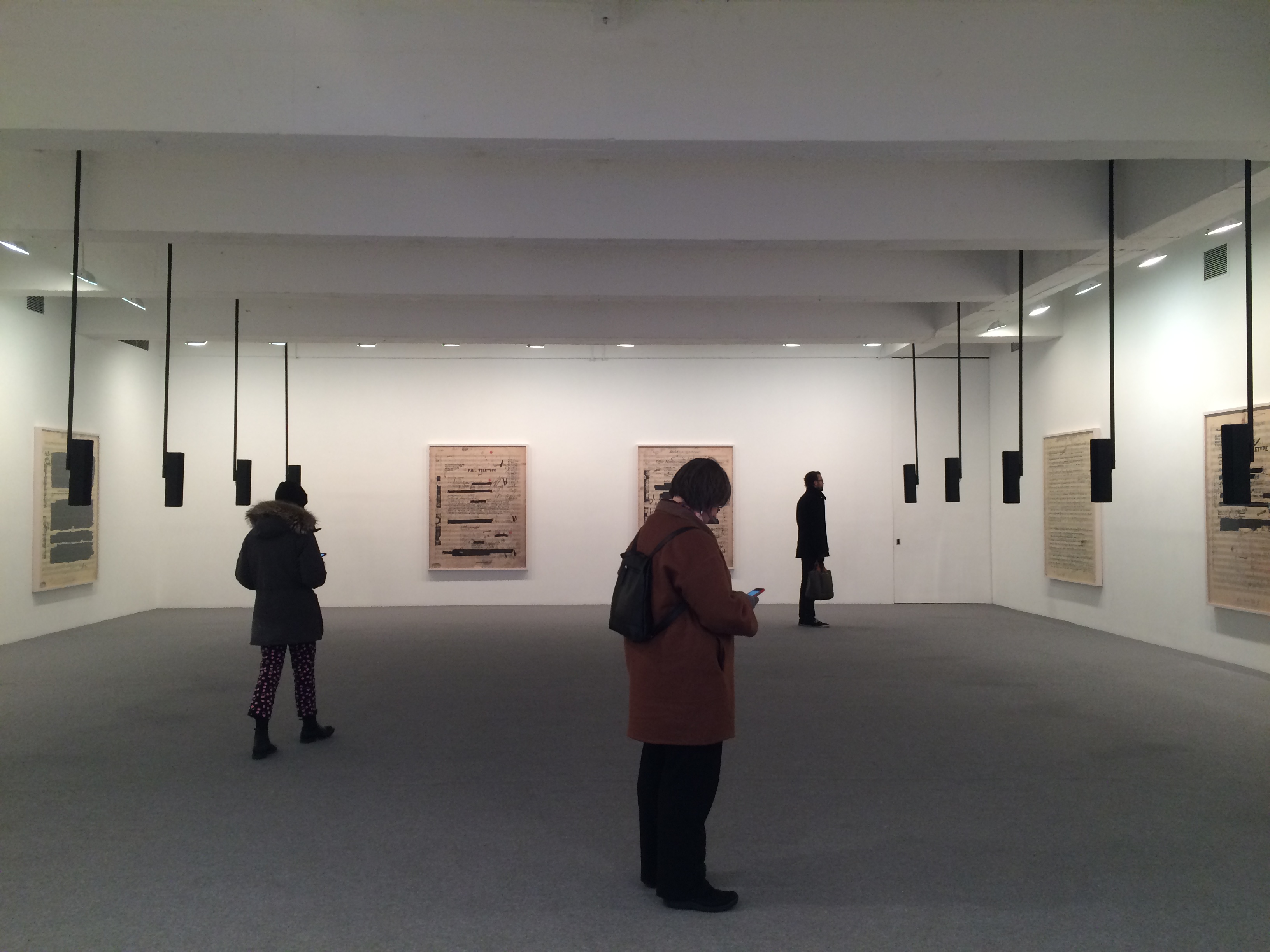 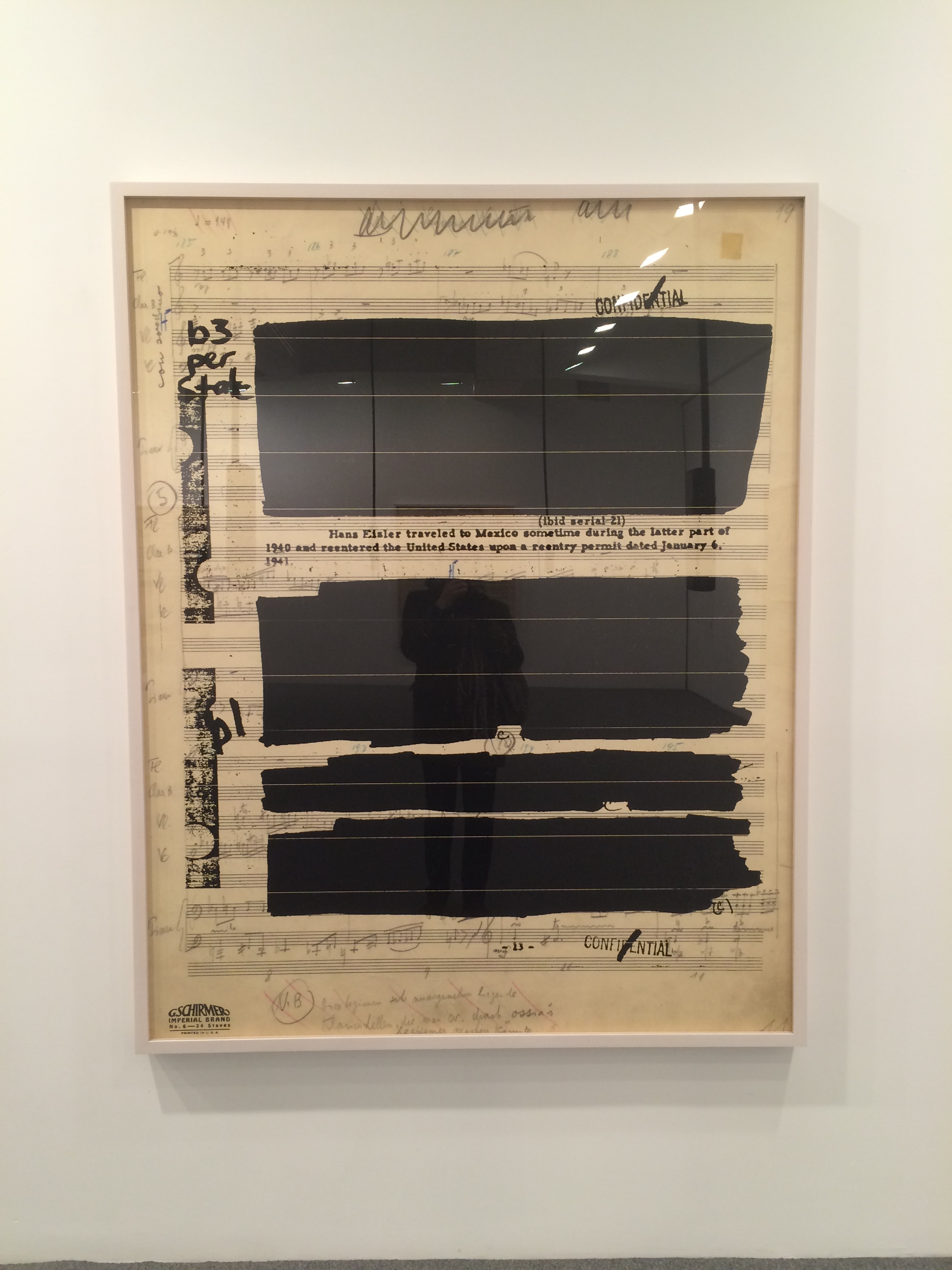 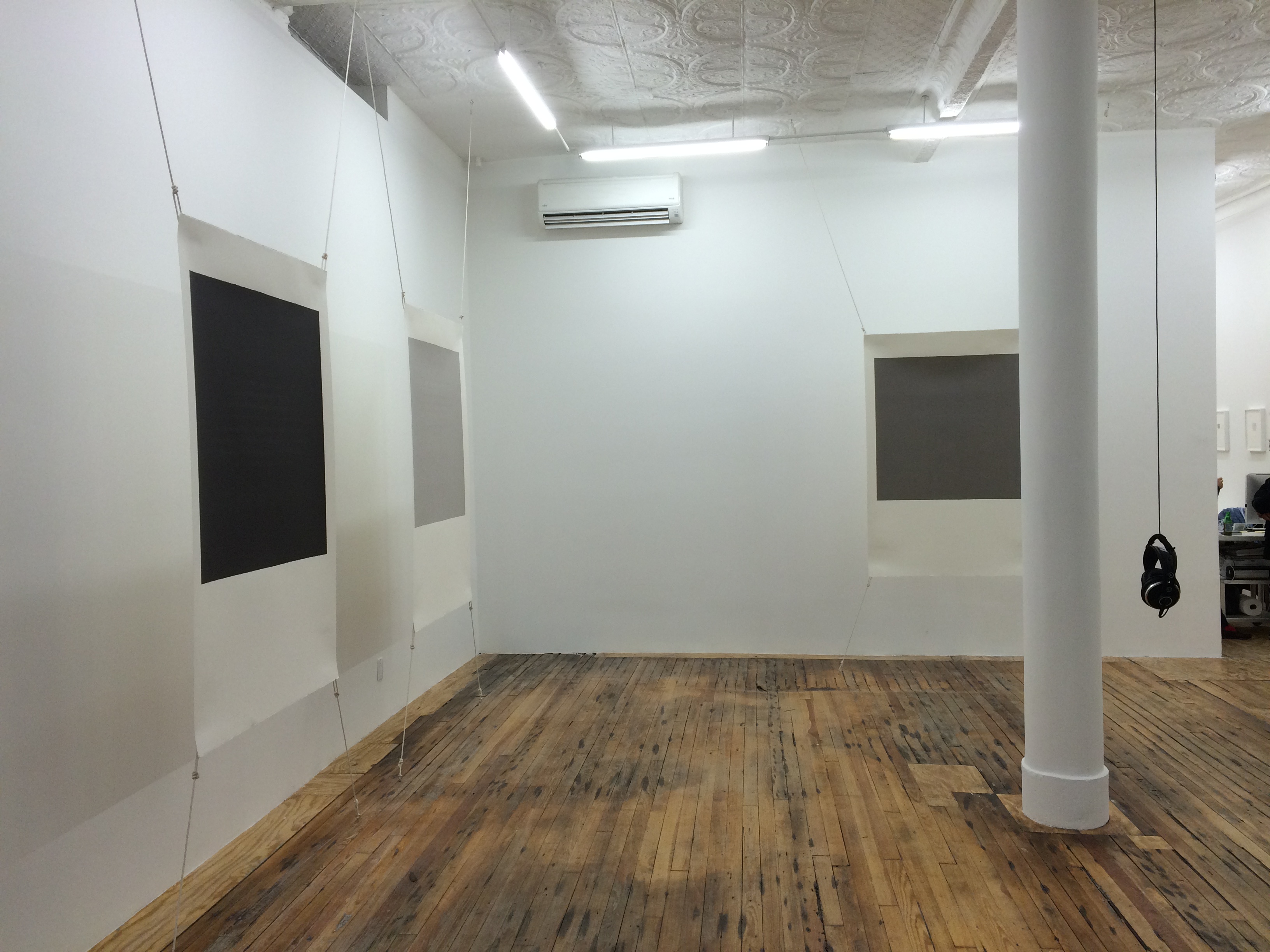 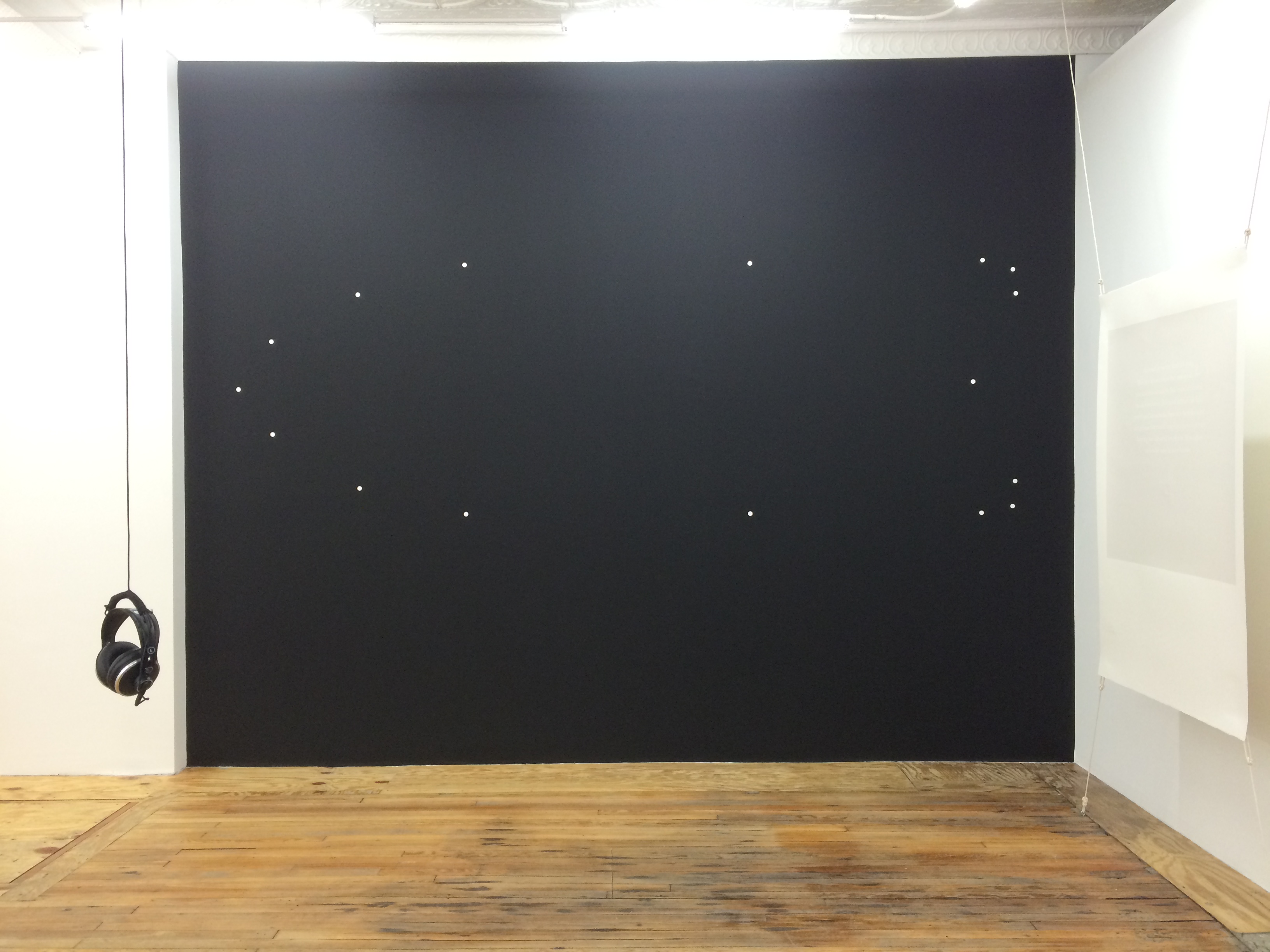 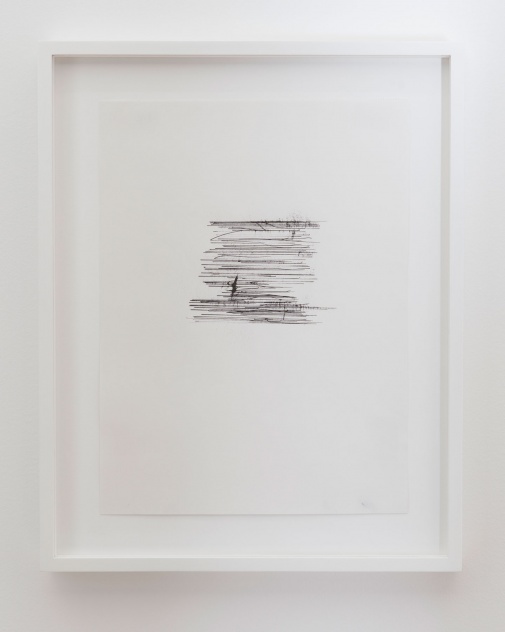 The sea is a recurring theme, too, in apexart’s, “Foot Notes: On the Sensations of Tone,” which features a selection of sound-art pieces inspired by Hermann von Helmholz’s assertion that “a noise is accompanied by a rapid alternation of different kinds of sensations of sound.” Edgar Varèse, in 1905, declared that “Helmholtz was the first person to make me perceive music as being a mass of sounds evolving in space, rather than an ordered series of notes.” Here, in this rather underwhelming show, we hear Helmholz echoed in the work of Una Lee, Chris H. Lynn, Robert Macfarlane, Ed Osborn, David Rothenberg, and the fabulous Annea Lockwood and Chris Watson.

Meanwhile, at Fridman Gallery, Daniel Neumann and Juan Betancurth’s “One Cycle Ahead” uses the “speaker relic” as a medium to explore sound as sculptural and architectural.

I also saw Diana Thater’s “Science, Fiction” @ David Zwirner, where she examines the dung beetle’s dependence on the stars in the night sky for navigation. One room features images of the Milky Way via the Griffin Observatory; another room features a Light-and-Space-style installation from which is projected a video of the beetles’ movement. Implicit here is a critique of what is lost — the beetles lose connection to their orientation system, and we potentially forfeit the essential “janitorial” role that these beetles play in the ecosystem — with the spread of light pollution and our diminishing connection to the night sky. A beautiful installation. 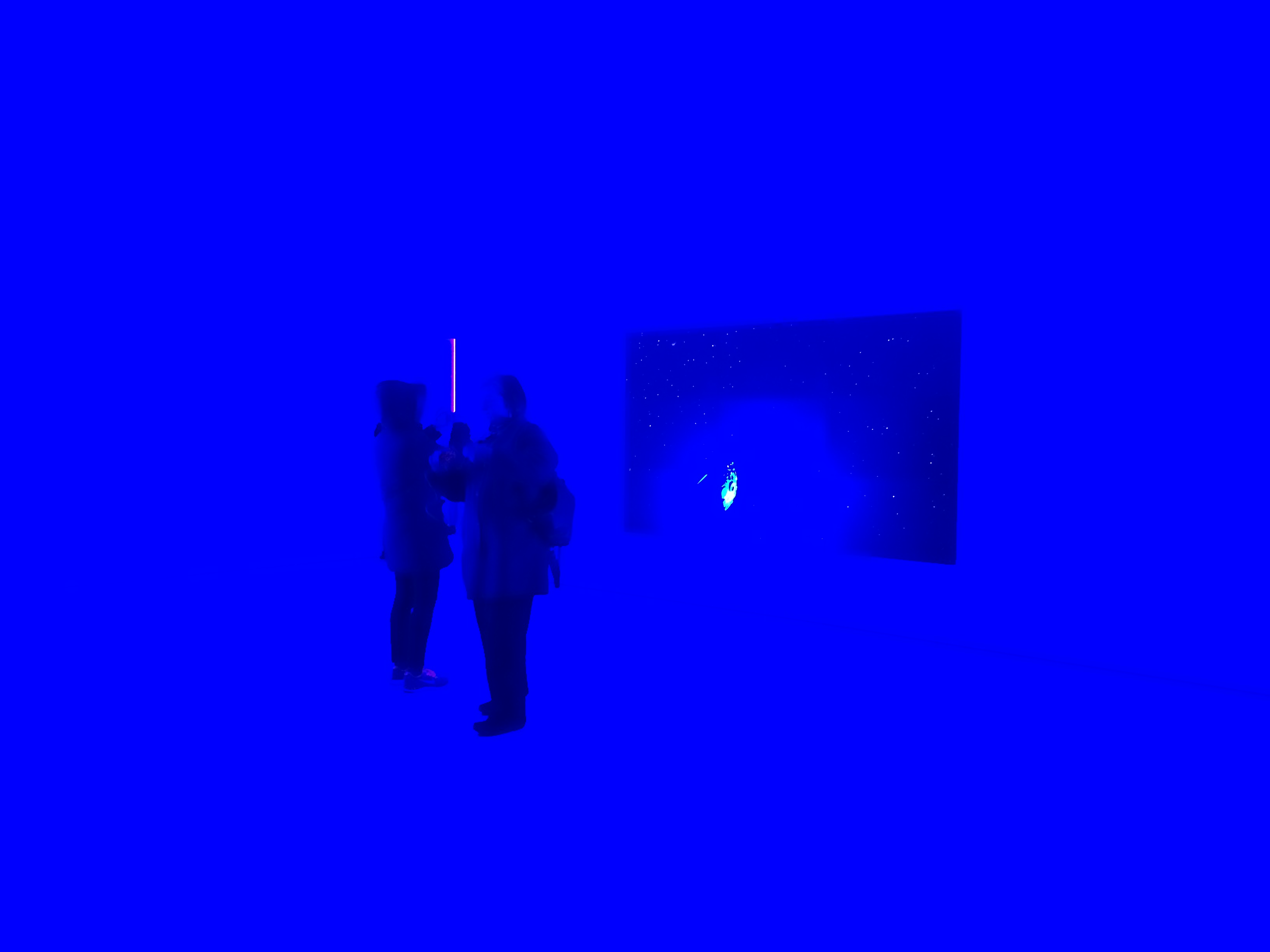 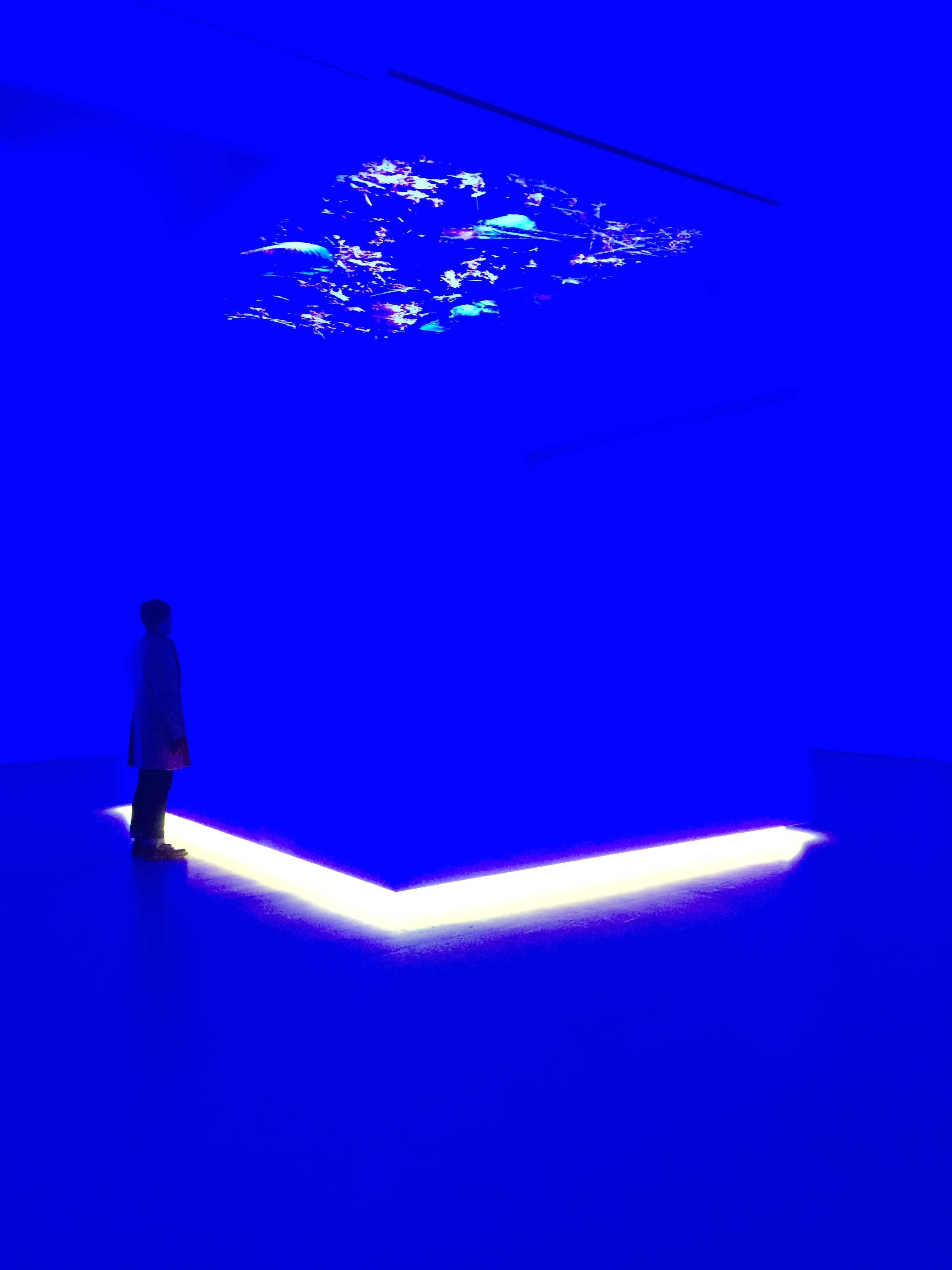 Basim Magdy’s “An Absent Population Laughs at its Haunting Withdrawal” @ Art in General plays with science — the chemical treatment of photography — and fiction, too. His video, “The Everyday Ritual of Solitude Hatching Monkeys,” mixes images of historic ruins and futuristic settings, land and sea, solitude and togetherness, with a stream-of-consciousness narrative voiceover that bears little relevance to the imagery. The video, like the text piece on the opposite wall, explores the tension between progress and failure and conveys the inevitable repetition of history. Meanwhile, the photos in “The Hollow Desire to Populate Imaginary Cities” make use of different film stocks and chemical treatments, and catalog a variety of chromatics and states of decay. 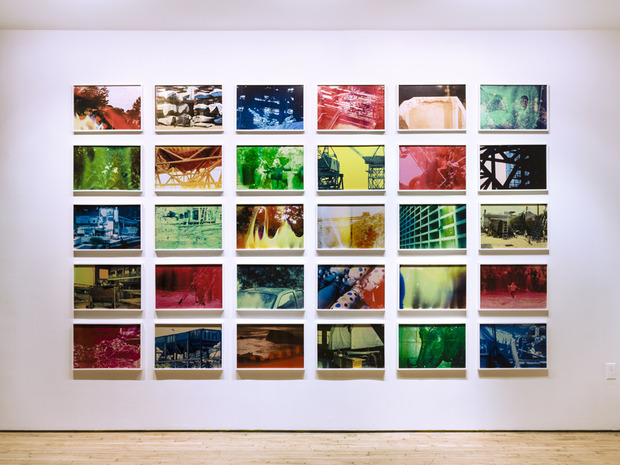 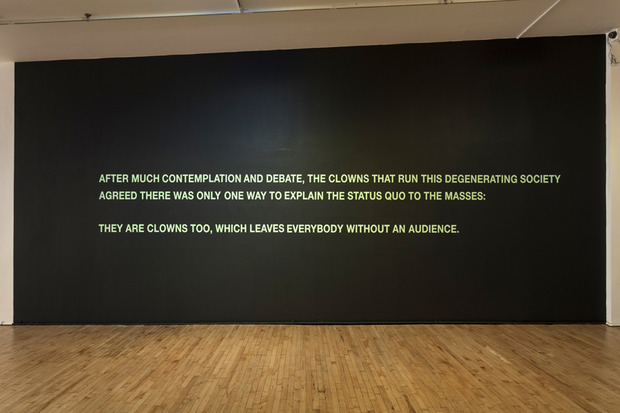 Finally, I saw Dutch artist (wow – such ample Dutchness in the galleries in recent weeks!) Jan Schoonoven’s wall reliefs and works on paper @ David Zwirner. Over the course of his career, which spanned from the 50s through the 70s, Schoonoven migrated from colorful Klee-inspired drawings to monochrome works on paper and grid-based wall reliefs. I wasn’t surprised to learn that he was a civil servant for the Dutch Postal Service; I figured he worked either for some bureaucratic entity — or for an egg-packing plant. 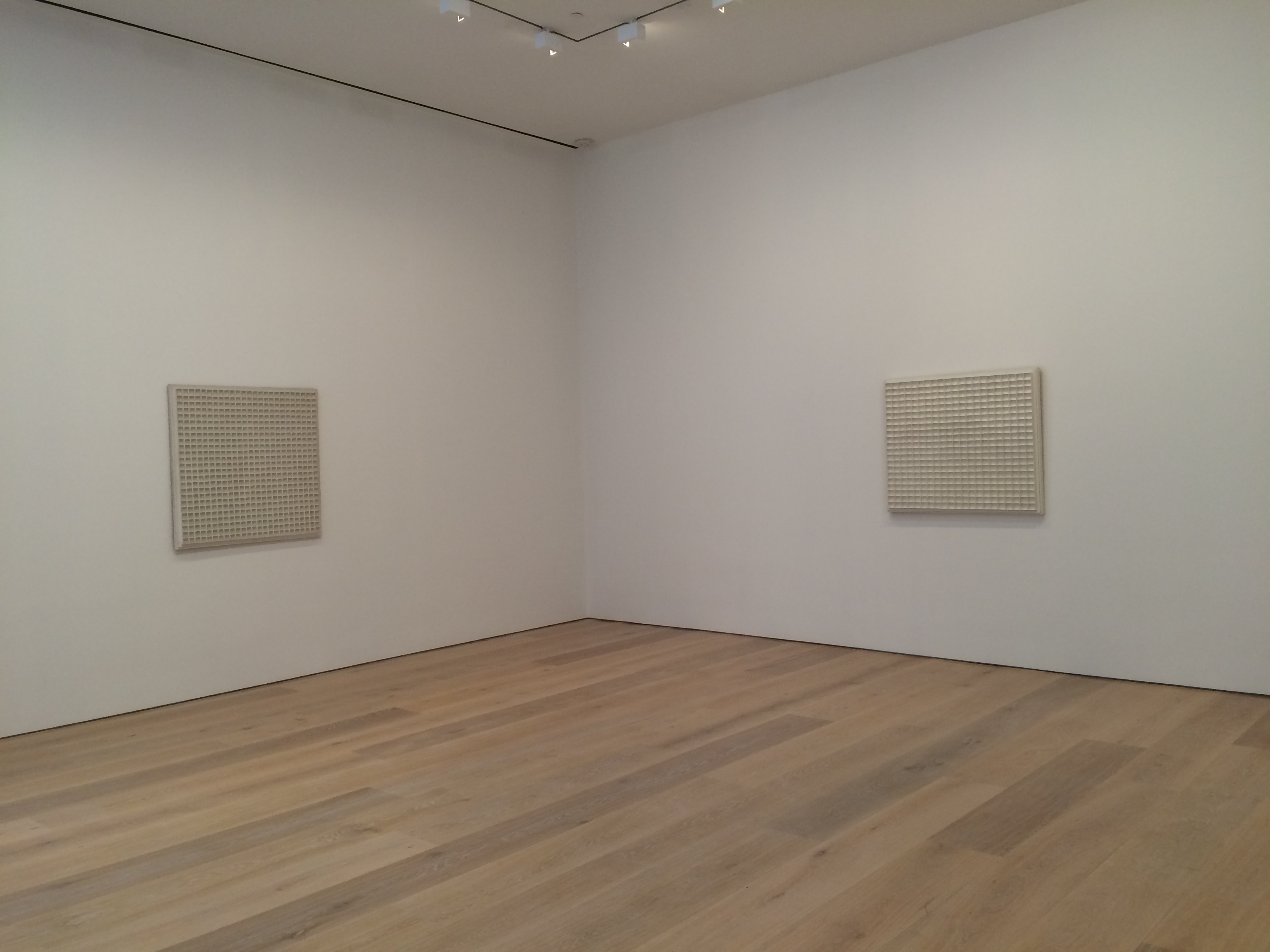 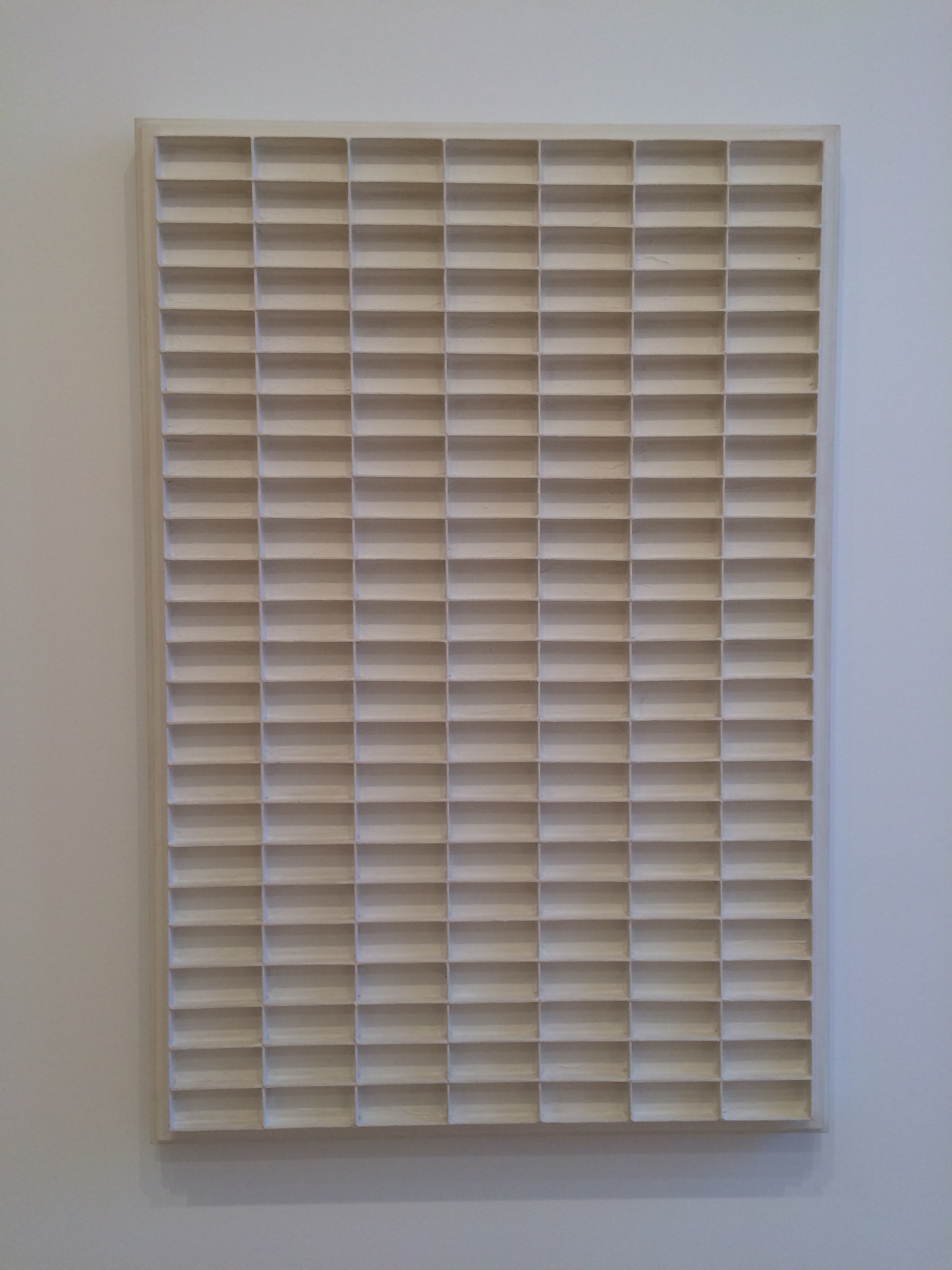 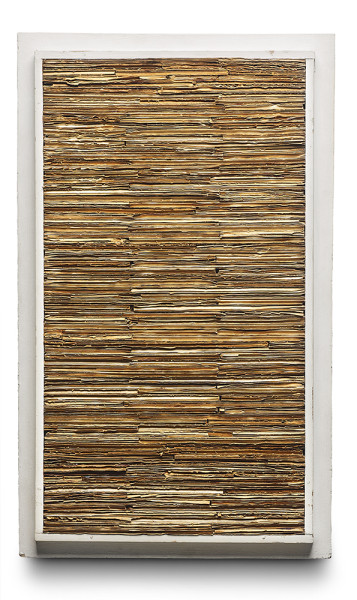 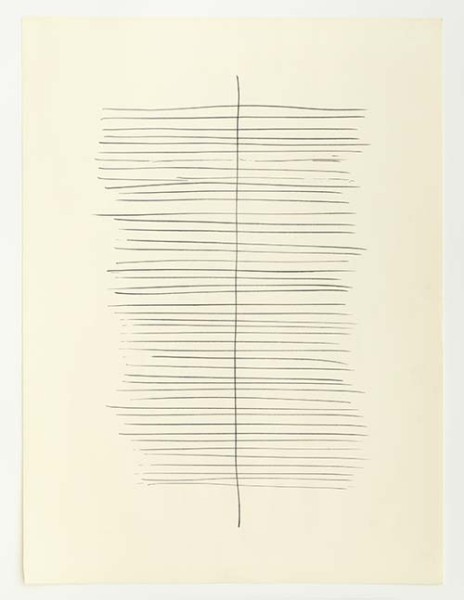 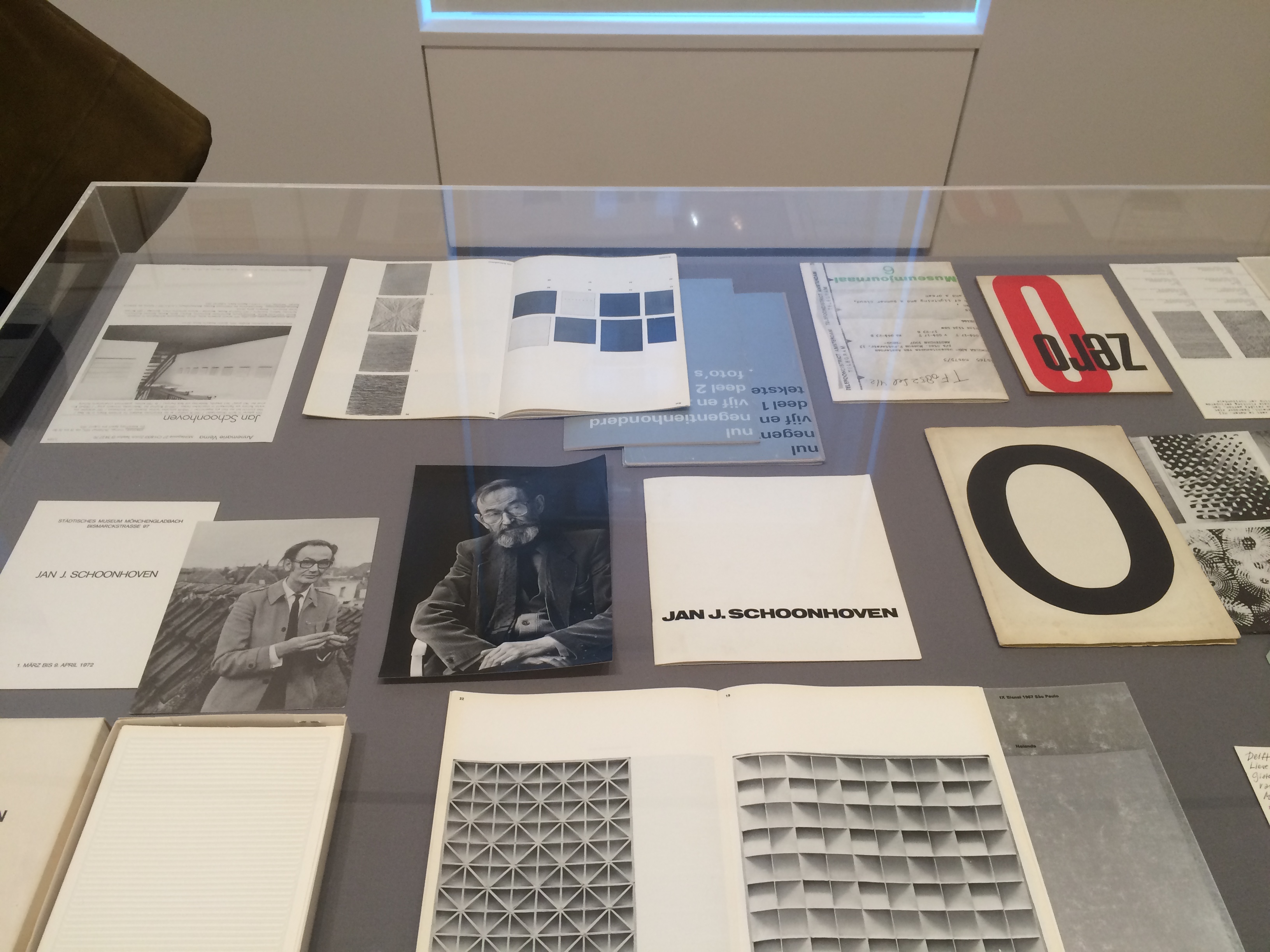