This coming week Places will be publishing a new article in which I examine two recent exhibitions — Jonah Freeman and Justin Lowe’s “Floating Chain (High-Res Toni)” at Marlborough Chelsea and Allan Wexler’s “Breaking Ground” at Ronald Feldman Fine Arts — as emblematic of the myriad “speculative archaeologies” cropping up in the art, design, and academic worlds. I had originally written a long piece solely about Wexler’s work, then decided, with my always-capable editors’ encouragement, to frame the article less as a profile of one artist, and more as an overview of a larger phenomenon, of which Wexler is one key example.

Still, it always hurts to cut paragraphs that I’ve labored over — so I’ll paste the edited-out bits below to afford them a posthumous presence. These passages might also serve as a bit of a teaser for the forthcoming article, and they hint at other directions a more biographical-profile-oriented article might go. So, here ’tis: 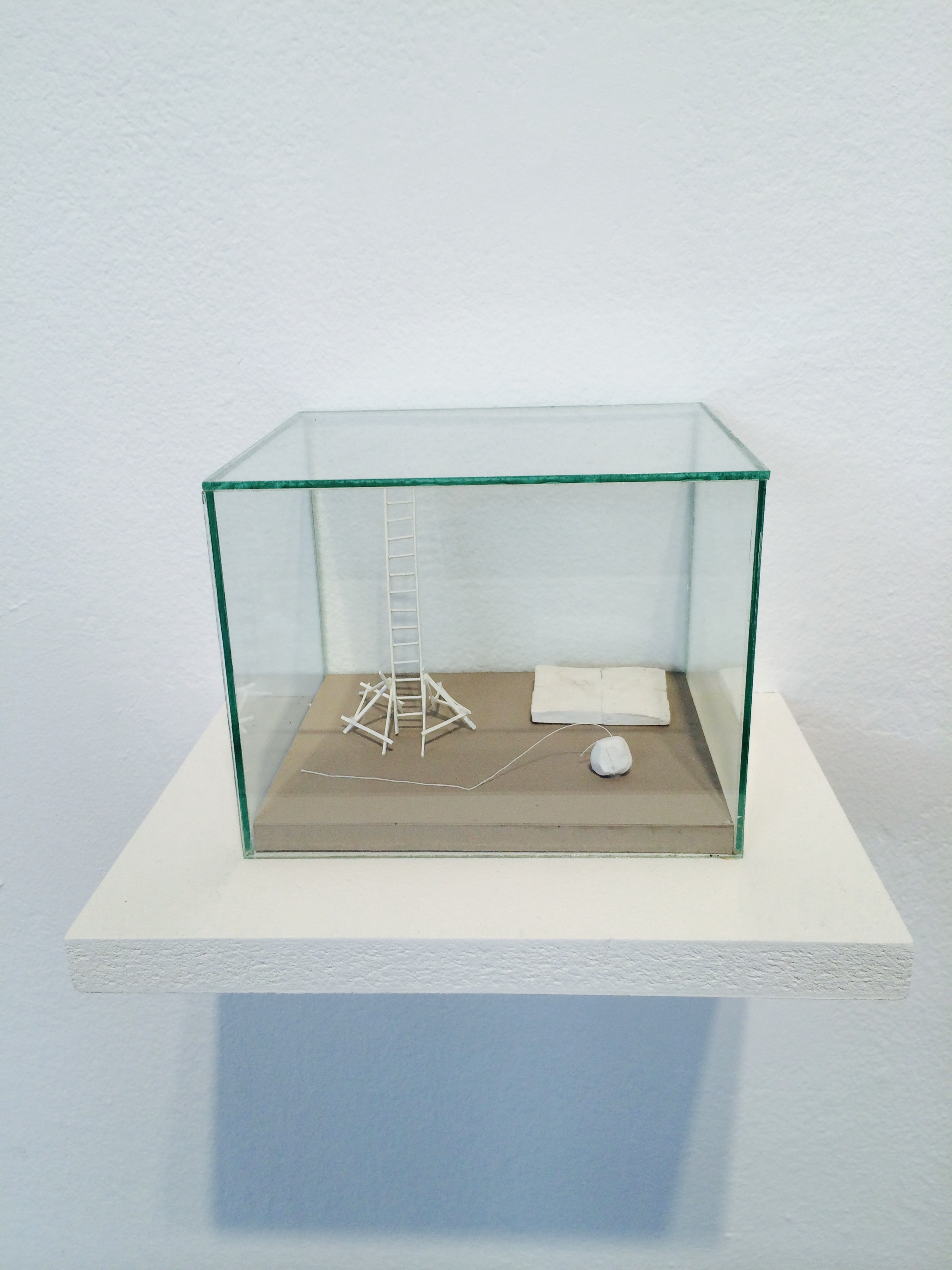 Floating on a plinth projecting from the gallery foyer’s wall was a small Plexiglas box. And in that box was a miniature diorama – of what, precisely, I wasn’t sure. There were three objects – a ladder (to where?) supported by braces, a flat rectangular platform notched into four quadrants, and an imperfectly shaped ball attached to a string – all molded from plaster, sitting atop a Kraft-paper-brown base. I wondered, what scene had Allan Wexler set here, in this prelude to his Spring 2014 “Breaking Ground” exhibition?

Rounding the corner into the south gallery, I encountered a series of “prints” of what appeared to be alien archaeological digs – imperfectly rectilinear extractions from a similarly generically brown, though now textured, landscape – and elemental architectures, proto-dwellings, primitive scaffolds and rudimentary engineering intervening in that landscape. These structures and systems sometimes floated atop the all-but-featureless terrain, casting pronounced shadows; sometimes anchored themselves in it; and sometimes carved deep voids into the ground – voids made accessible, perhaps inhabitable, by the same archetypal ladder I saw in the foyer vitrine. The prints’ titles – “Grounded,” “Bridge,” “Second Floor,” “Ascension, “Earthwork, “Gravity,” “Ramp,” “Rock Bottom,” “Repair” – alluded to fundamental actions and structures in the creation of built space.

Examining these prints as a whole, from the threshold between the sound and north galleries, where the series continued, I noted repeated aesthetic tropes: aside from the limited neutral color palette and gossamer tonality that united them, they also shared artificially darkened (“vignetted”) corners, a photo-editing technique often employed to “antique” an image. And scrutinized up close, it became apparent that these images – which Wexler refers to as “photo-based works” – are just as much a striated, engineered construction as are the architectural structures they depict. They’re composed of a grid of panels patched together, with their seams made visible. [I describe the process by which these prints are made in the Places article.] Wexler experimented with similar techniques in his 2009 “Overlook” show at Feldman, for which, he said, “I want [even the digital photos] to be hand-made, constructed images, so they are ambiguously digital and physical simultaneously…. The scars and glue stains are intentional.”[1]

The traces of transformation were apparent in other works on display in the north gallery, including two new sculptures and a 1975 conceptual series, Tree Transformation, seen here for the first time. The latter consisted of cardboard boxes (continuing with the Kraft-paper brown aesthetic) in which twigs, standing in as representatives for our most basic wooden building materials, metamorphose into altered forms, are spliced with metal rods and coated in various colors, and transform into joints and I-beams. As Wexler explains, “I cataloged hundreds of these transformations” – “Cut,” “Spliced,” “Perpendicular,” “Color Copies,” “Becoming I-Beam” – and “placed them in cardboard boxes in a similar fashion to the way I organized my shell and rock collections as a child. Without realizing it, I was creating the missing history of wooden architecture.”[2] This merger of the found and the manufactured, the transformation of the naturally-occurring into the human-engineered, is apparent again in the two sculptures, “Shelter” and “Adam’s House in Paradise” (which I describe in the Places article). We see here, as we did with the tree transformations, how naturally occurring resources become building materials, which in turn become architecture.

In his four-and-half decades of practice, Wexler has returned to the “first principles” of architecture – providing shelter and space for the practice of, and reflection on, fundamental human rituals: sleeping, preparing food, eating, bathing, reading, etc. As an archaeologist he digs down to lower strata than Freeman and Lowe do. And in so doing, he’s resorted repeatedly to the basic elements of architecture – the 2×4, the chair, the table, the hut – and explored how they’ve been molded, often through serial iteration, into architecture’s basic functional units of syntax or grammar. It’s telling that his 1999 “Custom Built” show, a 20-year survey at the Atlanta College of Art and City Gallery at Chastain, was organized not chronologically or typologically, but ontologically – into sections on Buckets, Sinks Gutters; The Shape of Form / Geometry; Built Structures; Function; Construction Process; and Nature and Architecture.[3] Ten years later, in his “Outlook” exhibition at Ronald Feldman Gallery, Wexler positioned his work in alignment with architecture’s urtexts: “I feel I am reinterpreting and perhaps updating Vitruvius’ The Ten Books on Architecture and Alberti’s On the Art of Building in Ten Books…. Some of the basic issues explored ask how to excavate into the earth, how to float a horizontal plane or how to position a chair on a surface.”[4] A similar ontological, genealogical approach is driving Wexler in a new project: the preparation of a monograph.

Much of Wexler’s earlier work operated at the scale of the individual domestic object or appliance, like the garment or garden hose or coffee maker; the individual furnishing, particularly the chair and the table; the mono-functional architectural unit, including his Parsons Kitchen, (1994), Crate House (1990), Little Office Building (1987), and Temple Houses (1977-88); or the urban, as in his “Proposal for the Manhattan Skyline, World Trade Center” (1973 and 1976). “Breaking Ground,” however, seems to pick up on themes introduced in the 1999 show to explore works at a different scale and temporality. Here, rather than focusing on the ways our built spaces choreograph how we eat and sleep and collect water to drink, Wexler telescopes out to explore humankind’s first and fundamental interventions into, and markings upon, an abstracted landscape. Rather than constructing a world of inhabitation – a set of structures or objects one can walk around and try on and experiment with – he builds here a world of projection and speculation that, in my experience, keeps the viewer at a physical and phenomenological distance. While these prints and sculptures (which I describe in the Places article) might be highly textural and seem to invite touch, they’re too “Platonic” (which I don’t mean to sound pejorative), too abstracted in time and place and ambiguous in concrete function, to allow for imaginative inhabitation and use. Wexler, however, convinced me of an alterative reading: this abstraction, rather than imposing distance, instead opens up these works to myriad possible readings and imagined applications. It’s like finding figures in the clouds.

Wexler has long explored the genealogy of building and dwelling. Yet I see this recent show taking a more archaeological turn – both literally, in that it focuses on “the dig,” and methodologically, in the way that philosopher Michel Foucault used the term, to refer to an historiographical approach that moves away from the individual subject to explore underlying rules delimiting the realm of thought within a particular place and time. No longer are we concerned with coffee makers and chairs – objects with which we have immediate experience, and which have a recognizable form, and whose mechanisms of operation we understand in principle. By “breaking ground,” we’re digging into primordial earth, tracing “deep time,” exploring the foundational connections between philosophy and the laws of physics.

“Breaking Ground” is archaeological in other ways, too. [In the Places article I address how Wexler’s work exemplifies media archaeology, too, in its experimentation with and juxtaposition of media formats.] He reinterprets one of his tried-and-true methodologies – an approximation of the scientific method, which, in his work, has traditionally involved “isolating elements, analyzing components, exploring one variable at a time” – and applies it here to modalities of representation.[5]

Wexler thus presents his “invented history of architecture and civilization” – a history in which he invites us to “see the ancient in the contemporary” – through layered and juxtaposed media formats, whose distinctive materialities and temporalities get all entangled.[6] “Breaking Ground” employs sculpture and assemblage and, through the “photo-based works” alone, model-making, photography, digital editing, printing, drawing, mounting, and finishing – each of which constitutes an “editorial” stage, a means of “renovating” the engineered object. In his current work, he explained to me, he’s adding a new tool to his representational repertoire: he’s creating multiple variations on his plaster landscape models, which he can then “accrete… in a narrative or sequential way, almost like a storyboard.” This cinematic addition expands not only the modalities through which landscape can be represented, but also the temporalities – the ancient and the contemporary, the slice in time and the longue durée – through which it can be contemplated.

As Wexler explains in a video accompanying the exhibition, he wants his viewers to “question drawing and photography.” And we do, as we consider how the material “original” becomes virtual, is rematerialized, and ultimately is transformed into altered states of matter. These works are simultaneously painterly, textile, sculptural, photographic, architectural. They’re concurrently objects and architectures and landscapes. They pose ontological questions about the tools and techniques we employ to conceptualize, program, plan, engineer, construct, and represent our “natural” and “built” landscapes.

Wexler’s “Gravity” (2013) depicts individual bricks being extracted, using what seems to be a rectangular-prism-shaped cookie cutter, and stacked upon a flat landscape – a vignette reminding us, as does Tree Transformation, of the deep history behind the standardization of our building materials. In “Sheathing the Rift” (2014) similarly standardized panels coat the edges of a crevice. I couldn’t help but notice this cracked-and-tiled terrain’s formal resonance with a landscape I encountered nearly every day when I lived in north Park Slope, Brooklyn: Atlantic Terminal, a major hub for both the MTA and Long Island Railroad, features a Lego-meets-rock mezzanine-level overhang, a sort of Cubist outcropping. As it turns out, Wexler designed this “pixelated” architectural landform in collaboration with his partner, Ellen Wexler, and he admitted to me that he only recently noted the parallels between this work and “Sheathing the Rift.” “Overlook” (2009), he explains, is meant to function like a scenic off-road viewing station – an infrastructure of directed observation-at-a-remove, a means of framing the “theater of people [and] activity below on the concourse level while you wait for a train.” This overlook-as-ocular-device also cultivates a temporal perspective that’s in line with the archaeological: it “reminds us of the subways’ subterranean existence and speaks about excavation, strata, and geology.” 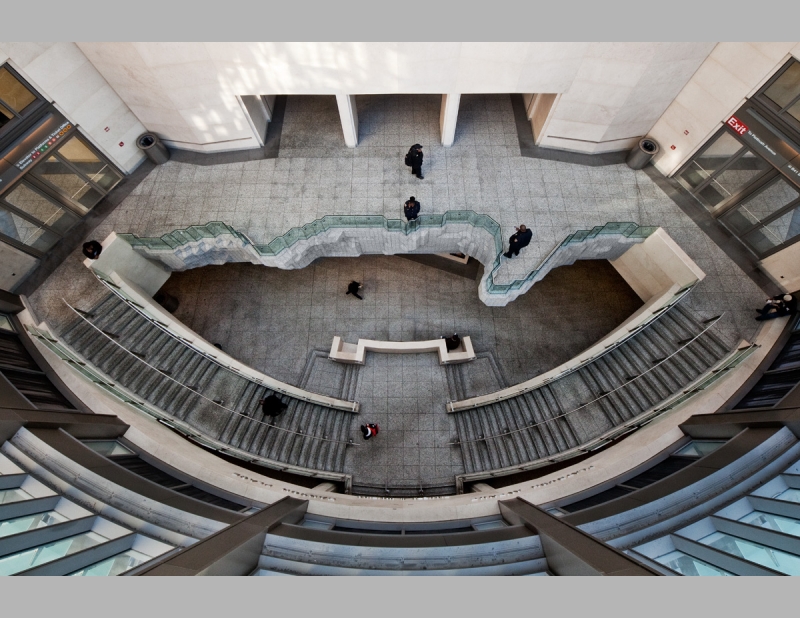 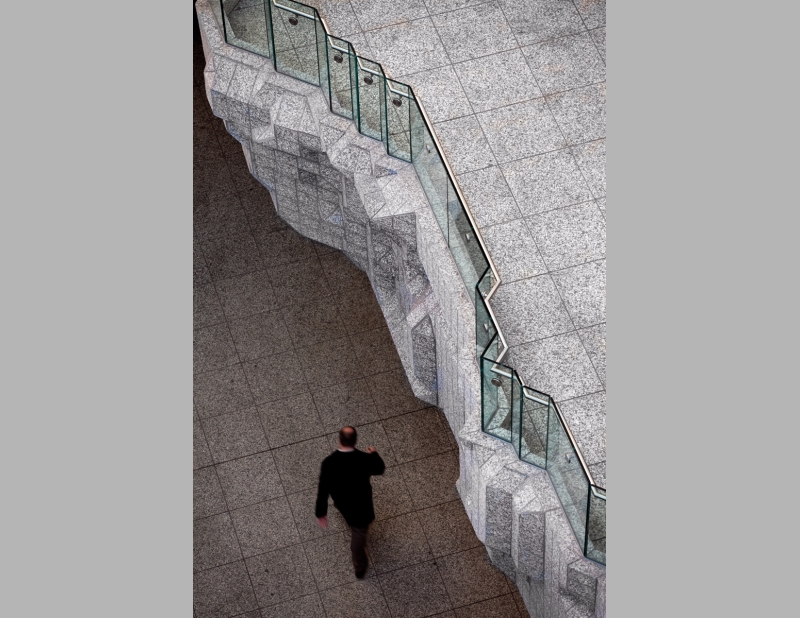 As Michael Fehr described Wexler’s work, “Overlook” is a “structure for reflection” – reflection not only on the human and machinic activity below, the “content” of the scene toward which it directs our attention, but also on the structure itself: an artwork melding rock and pixel, “nature” and “culture,” geology and computation, deep time and currency. In looking both through and at the installation – as we do with Wexler’s photo-based works, sculptures, and models (and with Freeman and Lowe’s gridded kaleidoscopes) – we recognize it as a tool of representation. It’s a means of directing our gaze and attention toward the pattern and entropy, the instinct and calculation of human behavior; and, at the same time, toward the endless variety of configurations in which we can arrange the basic elements of architecture, to allow for that theatre of human behavior to play out.