So, I saw some art on Friday — mostly pleasant, clever stuff. Nothing that required a tremendous amount of intellectual or affective engagement. (Which is good, because once again I’m a little distracted by a wounded ego and a broken heart.)

Anyway, at James Cohan, Michelle Grabner used household objects — garbage can lids, construction paper, etc. — and kindergarten-craft techniques to transform the trappings of domesticity into decoration. The domestic and the suburban have long been themes in Grabner’s work; she runs an exhibition space, The Suburban, out of her backyard in idyllically suburban Oak Park, IL. Yet the works in this exhibition have no edge, no critical dimension. It’s like looking at pretty tablecloths at Crate & Barrel or Marimekko. All cute and innocuous. Which, I guess, is fine: I could use a little cute and innocuous — rather than adorable yet destructive — in my life right now. Whoa, TMI Alert!! 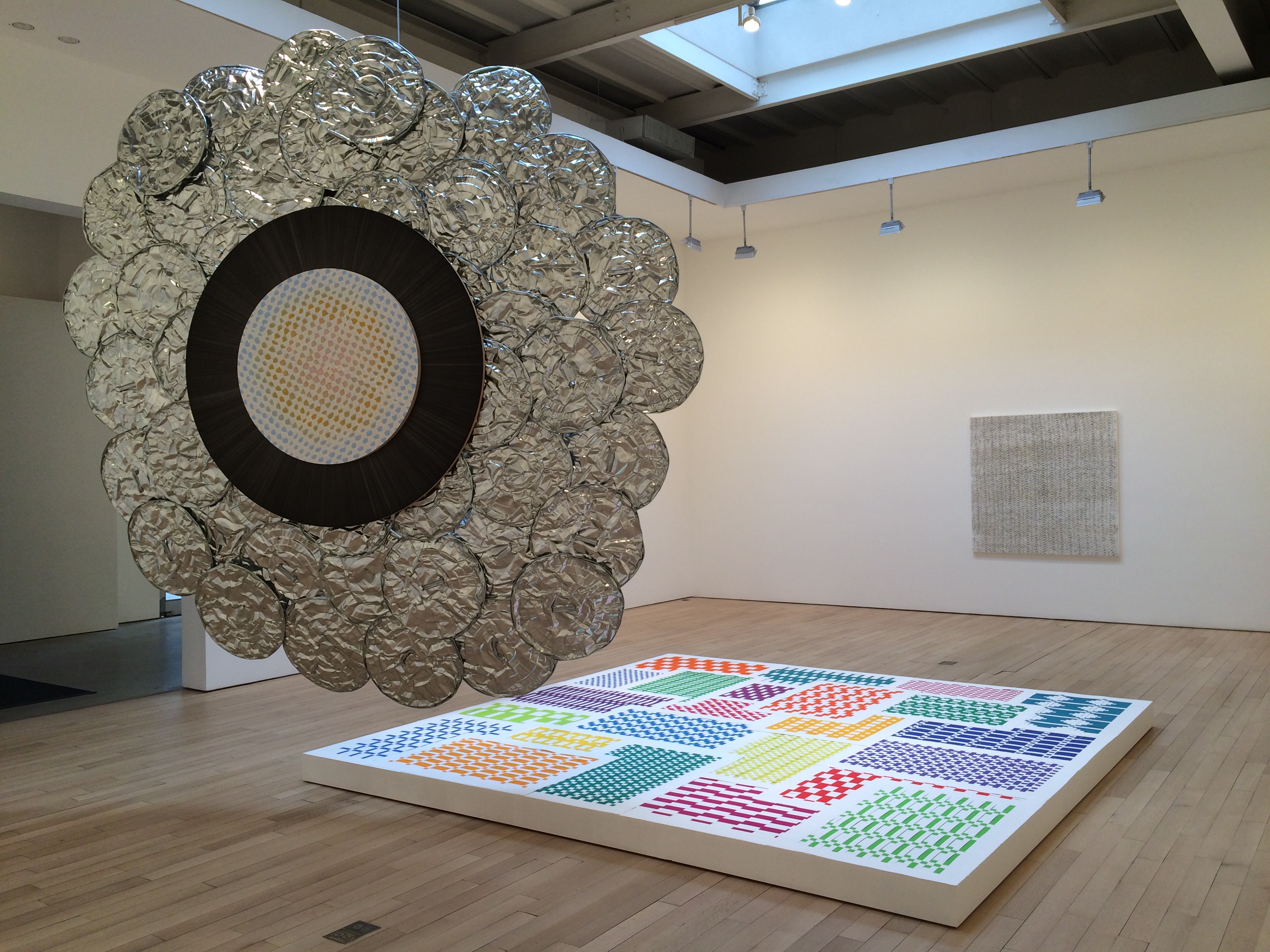 Moving on with our Charming Kaleidoscopic Aviation theme: kites! Jacob Hashimoto’s “Skyfarm Fortress” at Mary Boone is a most benevolent of bastions — a serene structuralist parapet. 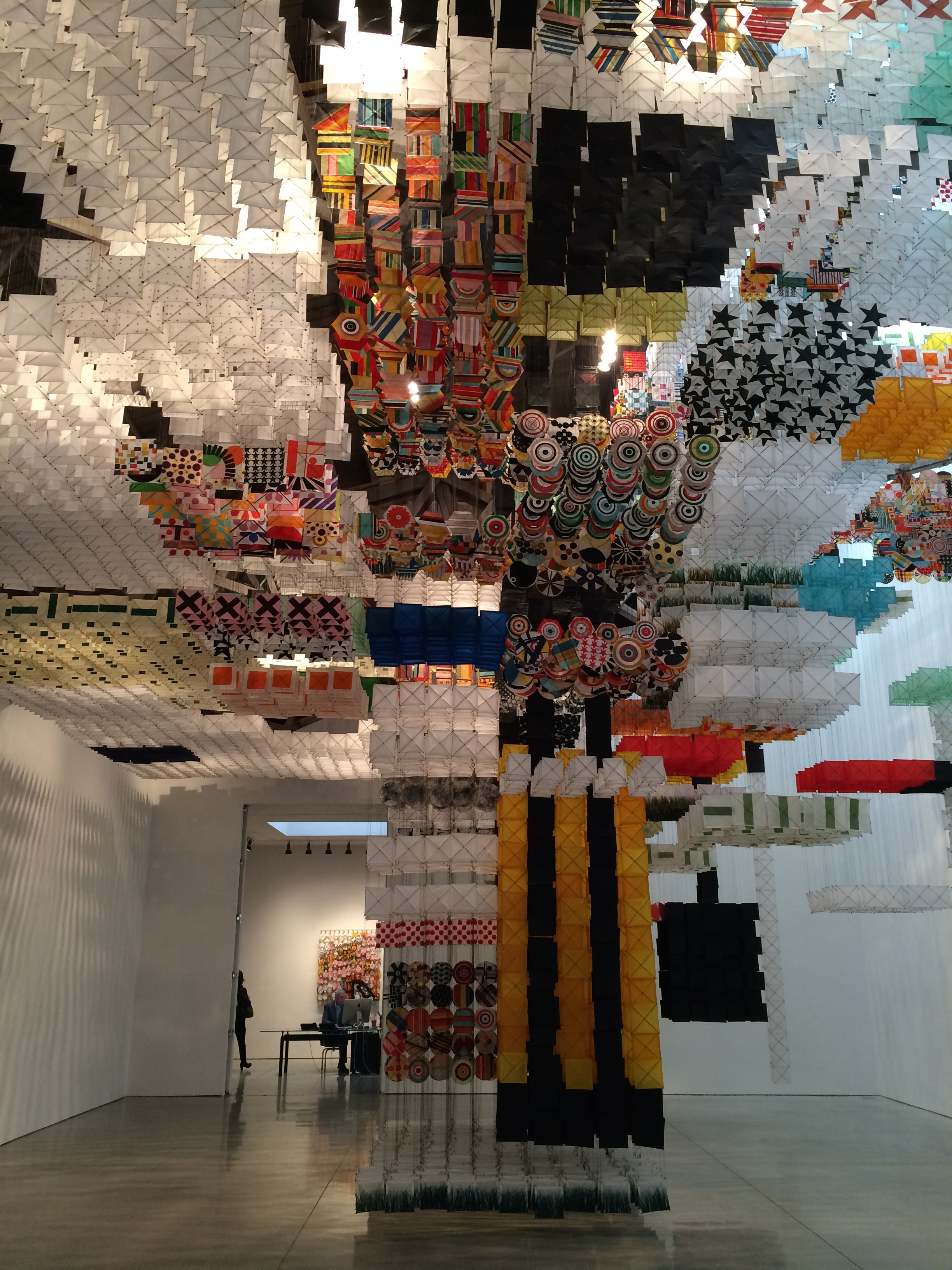 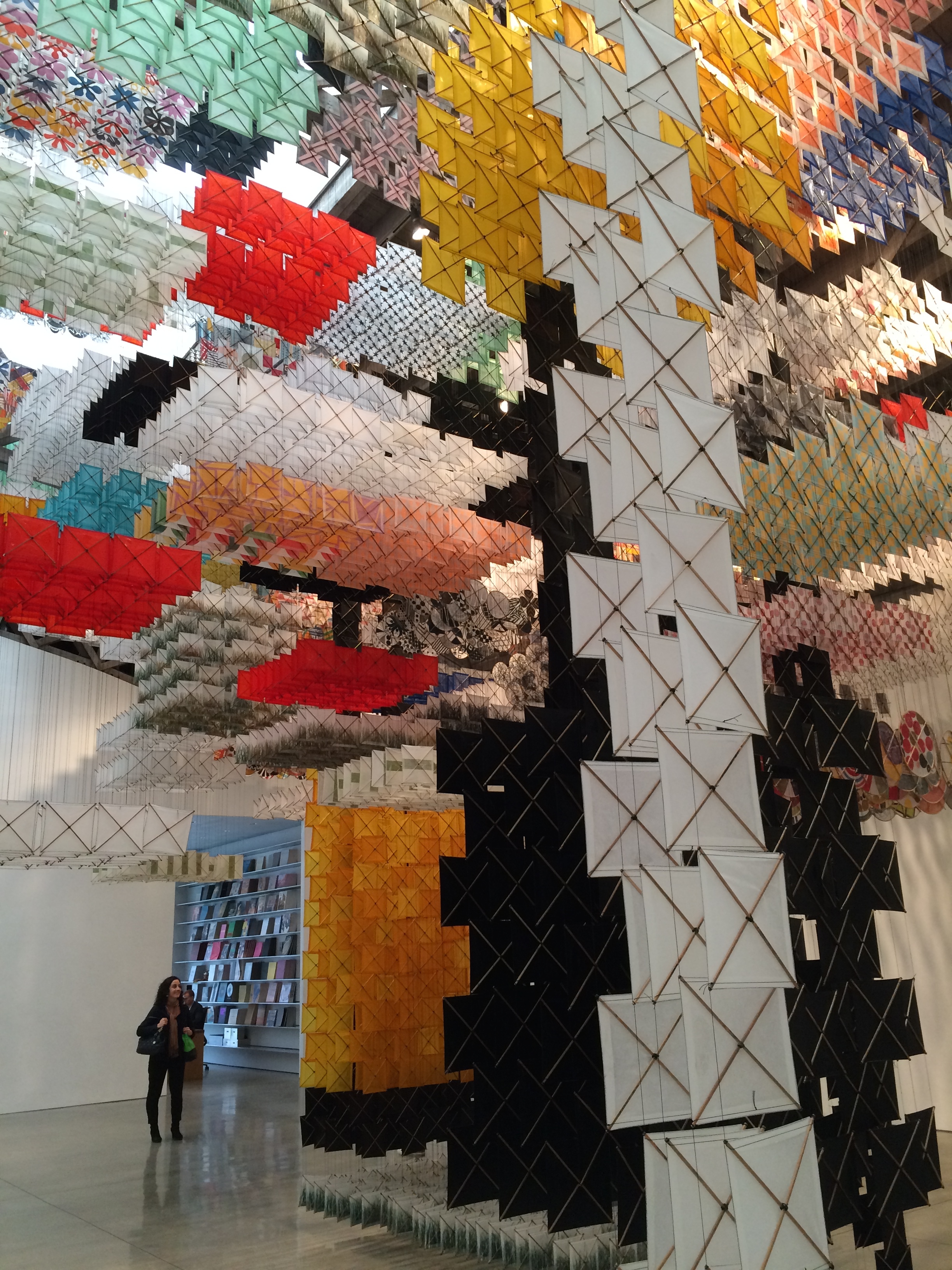 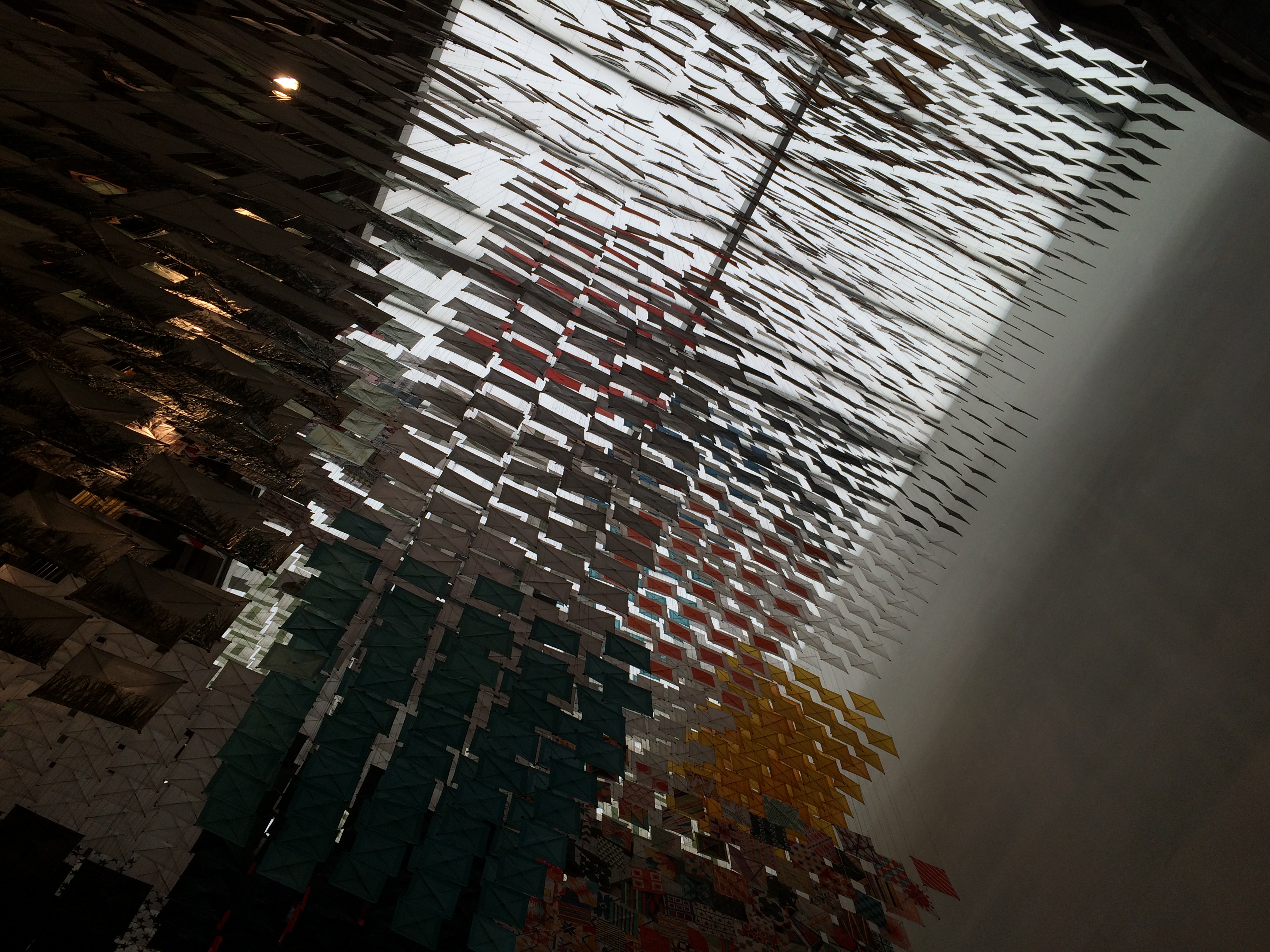 Then I found myself amidst something a bit heavier: Claudio Parmiggiani‘s ghost libraries — Delocazione, traces of absent objects, rendered in smoke and soot — and bronzed bread (whoever eats this bread will live forever) at Bortolami. In order to make the Delocazione, Parmiggiani “builds an installation and sets it on fire with a combustion of tires. When the objects are removed, what remains are their negative outlines in soot, thus revealing their trace and memory.” Maybe I need to burn some tires. 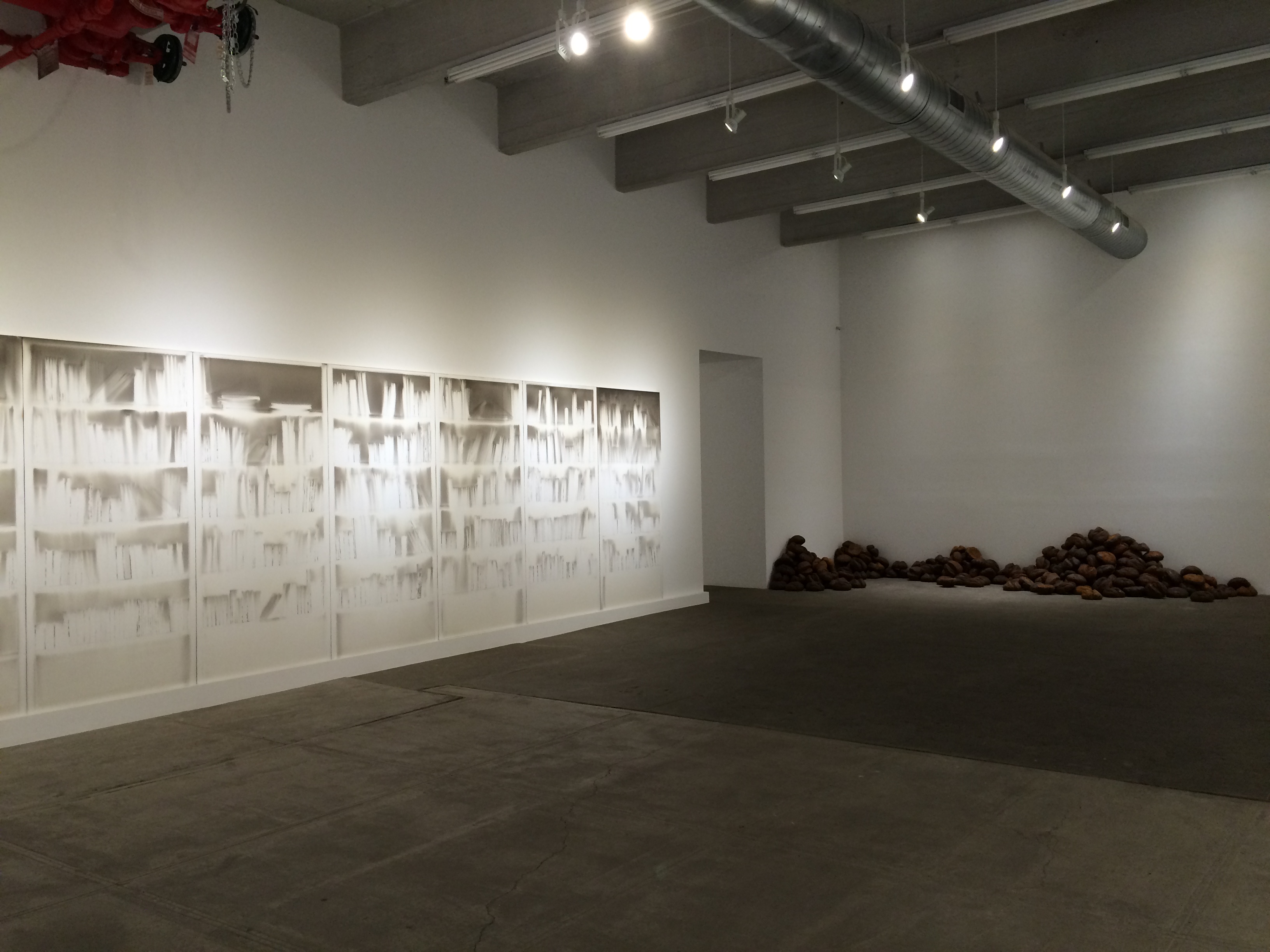 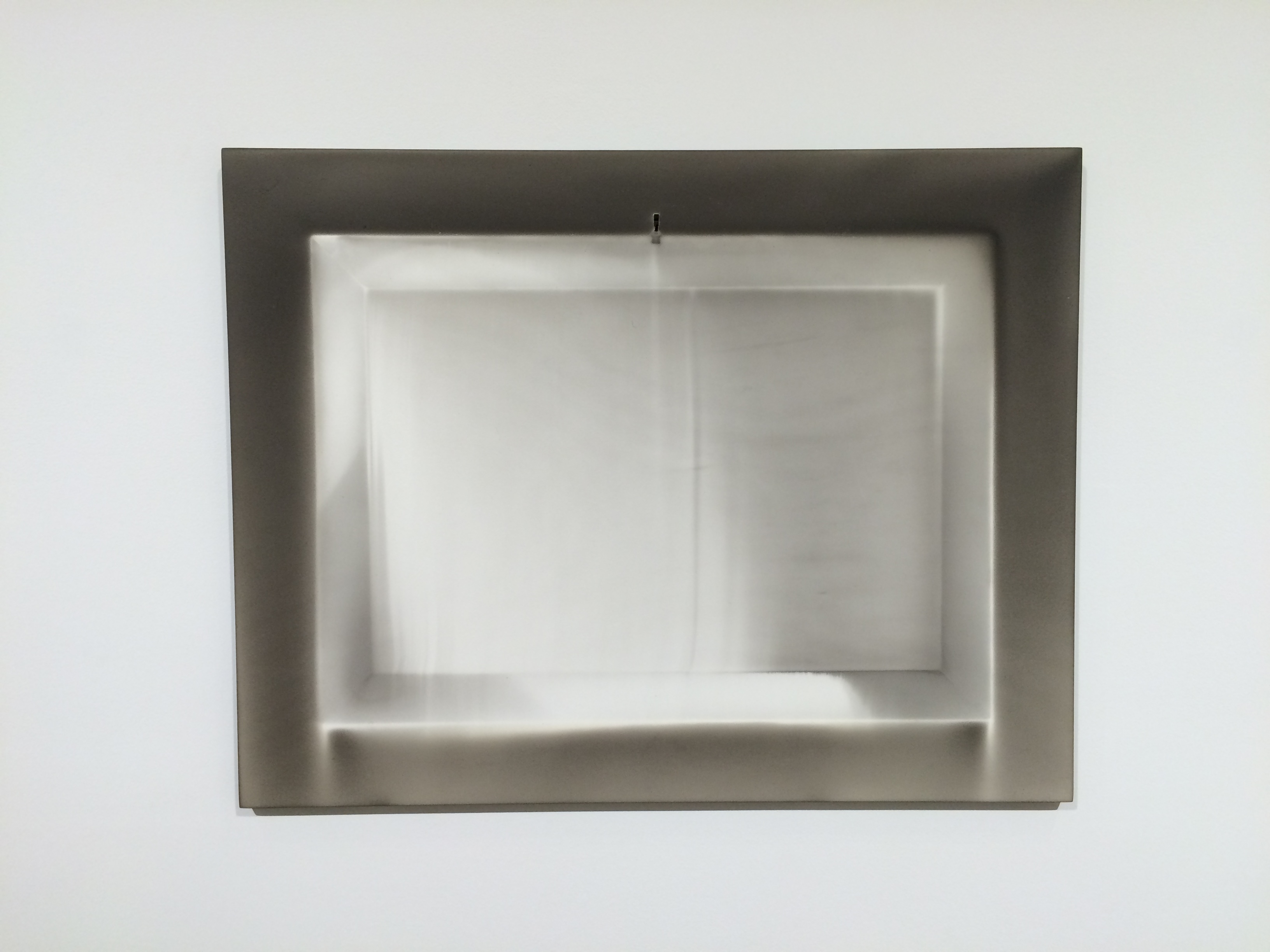 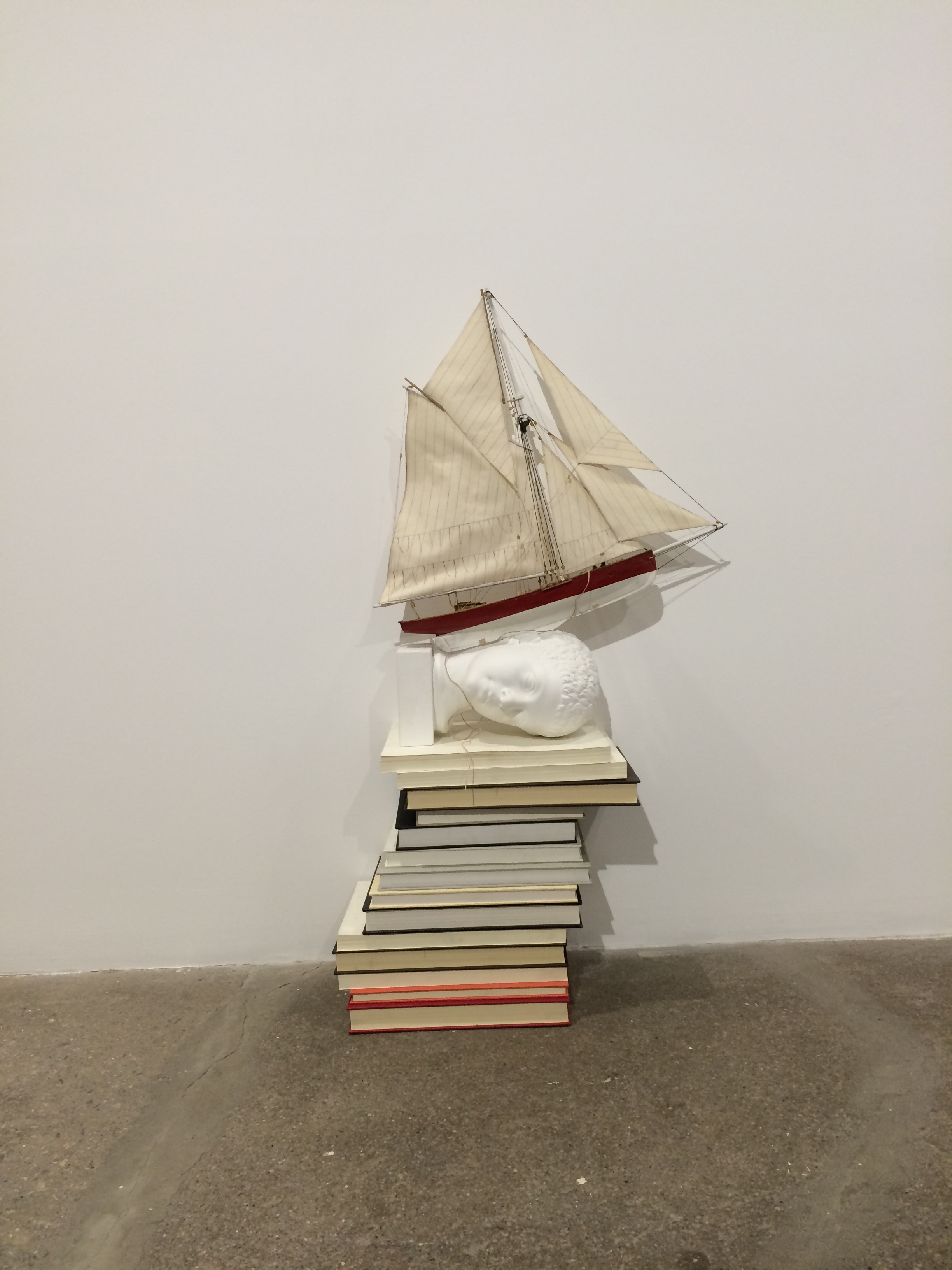 Then, to thwart all this nostalgizing and purge the mnemonic weight, I headed over to Gavin Brown’s Enterprise for Rob Pruitt’s aptly named “Multiple Personalities,” which consisted of three very distinct rooms. I particularly liked the transition from the Surrealist Microsoft Beach room (my title), into the Scribble Cat room (again, my title), where Pruitt displayed enlarged versions of automatic drawings he created during therapy sessions. This back room was presided over by a bunch of paint-splattered cats, which I regarded as little, benevolent guardian angels — the kind that rub up against your leg, drawing you out of your psychic turmoil and back into the warmth of the sandy beach, or that familiar, placating Klein Blue screen. 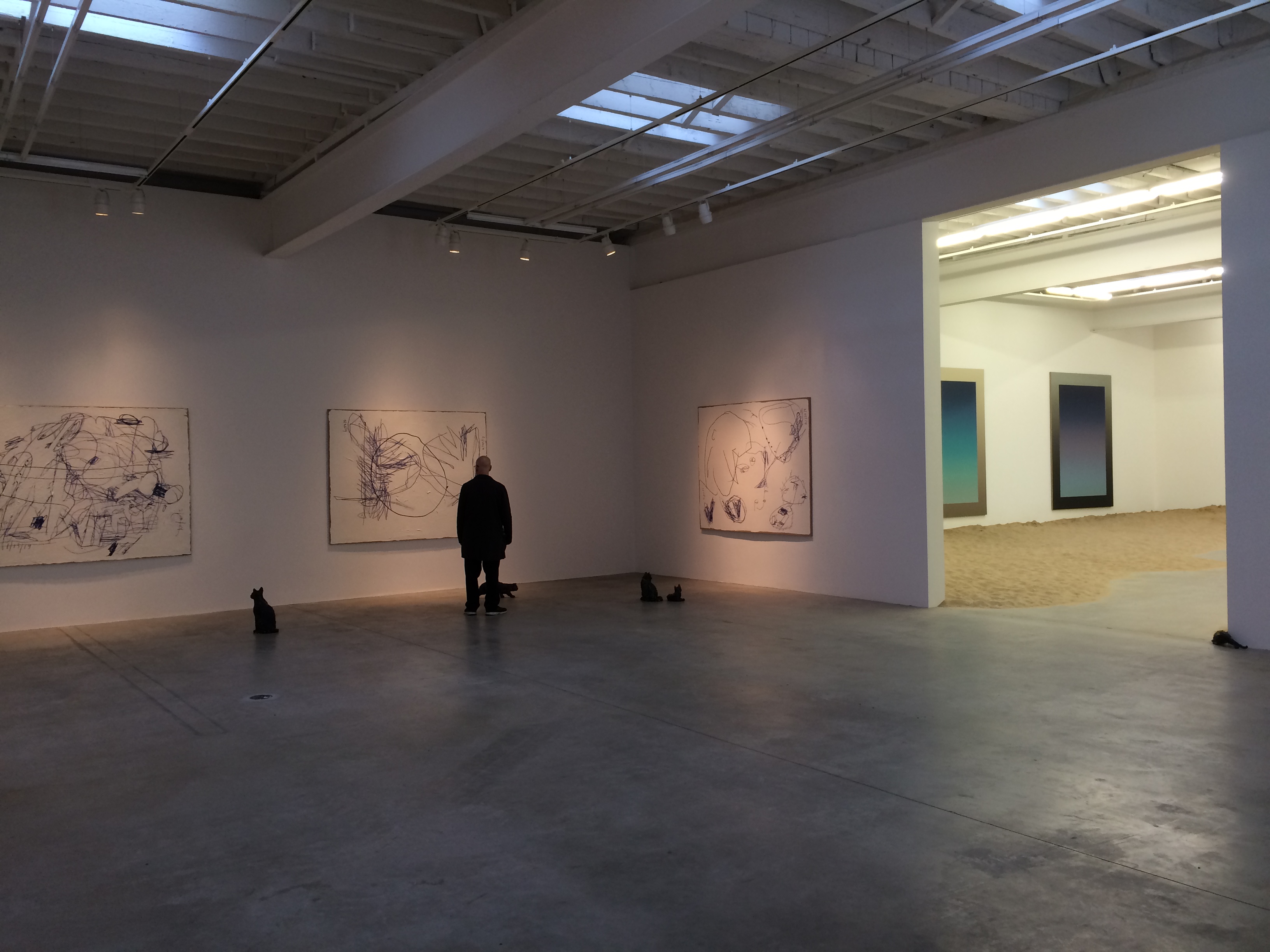 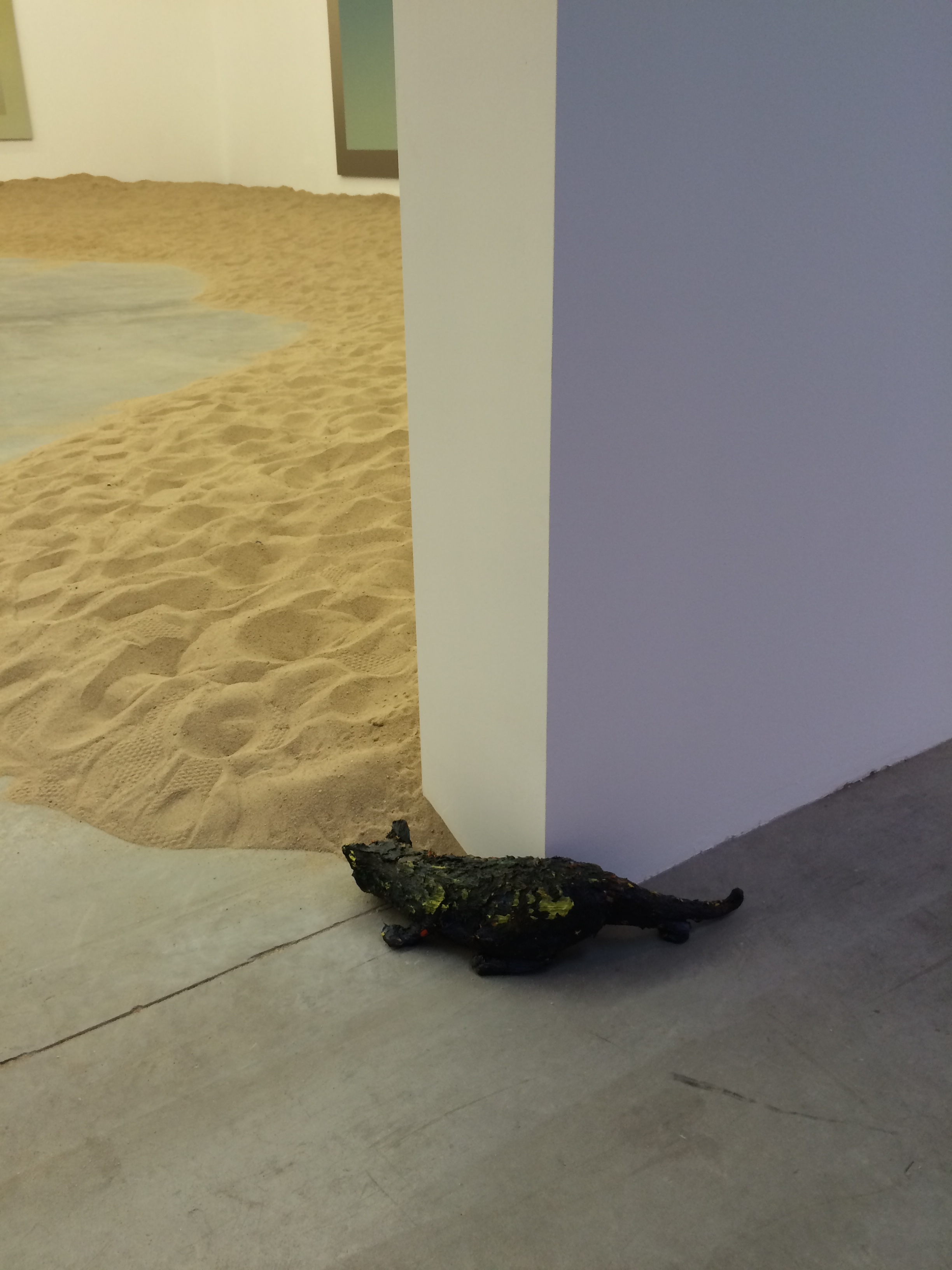 And finally, extending the absurdity: The Swiss Institute’s Fin de Siècle, an all-chair-cast re-staging of Ionesco’s play “The Chairs.”

In “The Chairs,” an elderly couple recounts the demise of civilization to a stage full of empty chairs. Absent of any sitters, the audience is left to imagine the invisible figures that the increasingly incoherent Old Man and Old Woman address. In Fin de Siècle, the chairs themselves (including pieces by Marcel Breuer, Le Corbusier, Pierre Jeanneret, H.R. Giger, Robert Venturi…) speak asynchronously, cast as characters and imbued with life. Directed into small vignettes of imagined conversations and actions that transcend periods and design movements, their dialogue echoes the modernist promise fading away.

Amidst their chiaroscuro-ed mise-en-abyme, the chairs readily take on personalities. You just know, for instance, that that Giger chair is a total jerkoff. And that the Alessandro Mendini NONCHAIR can drive you nuts with his incessant ontological blather. 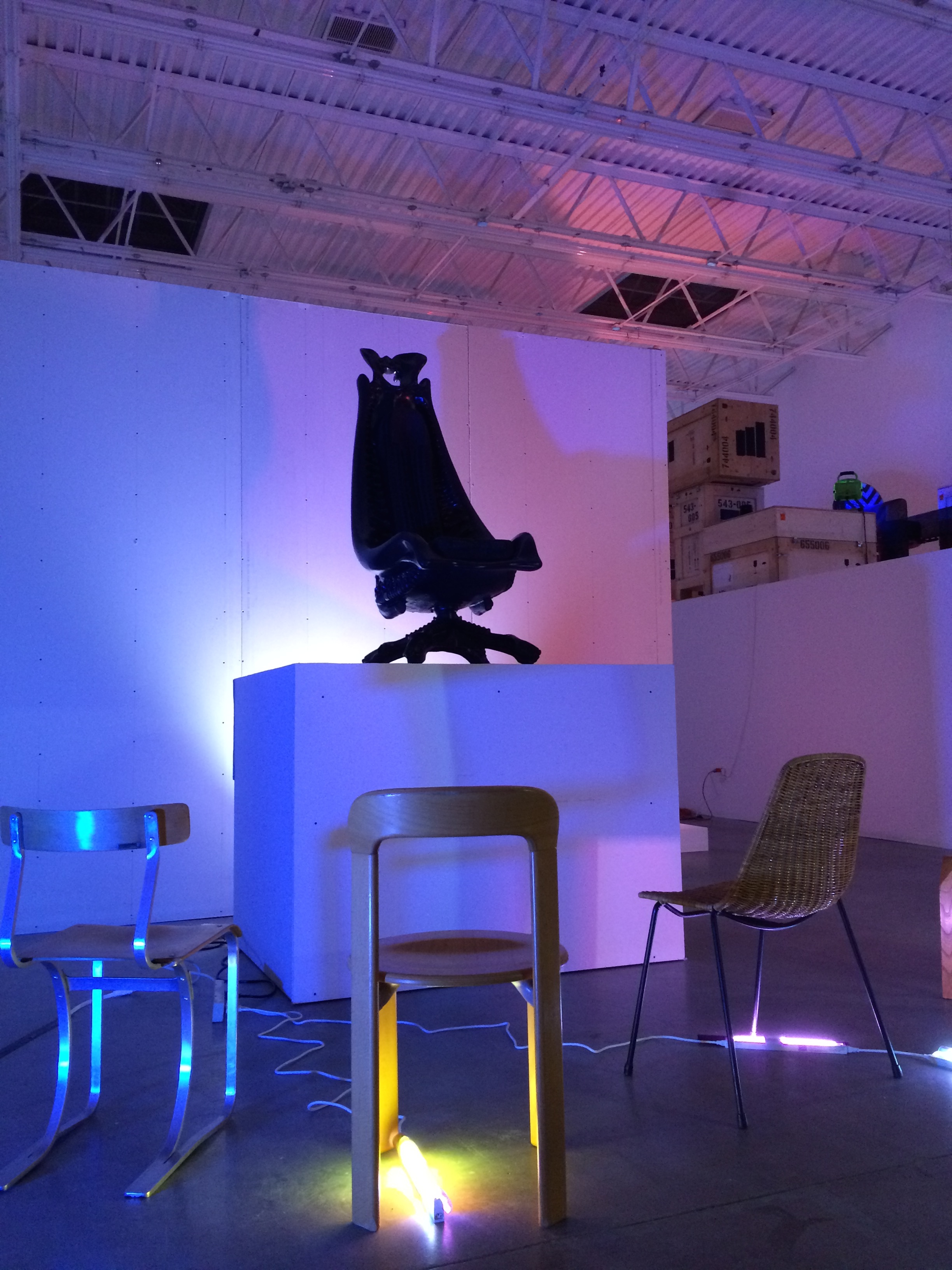 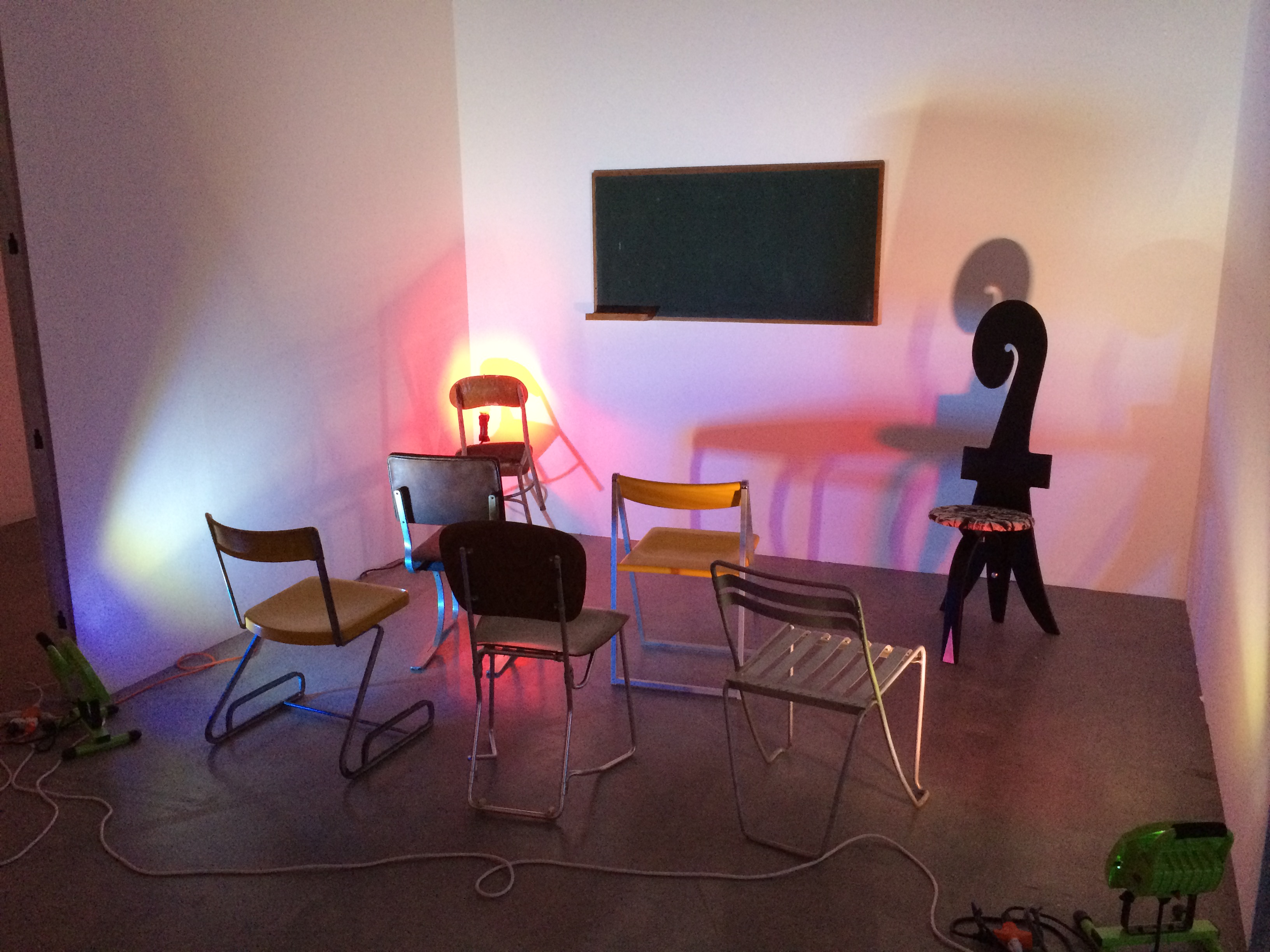 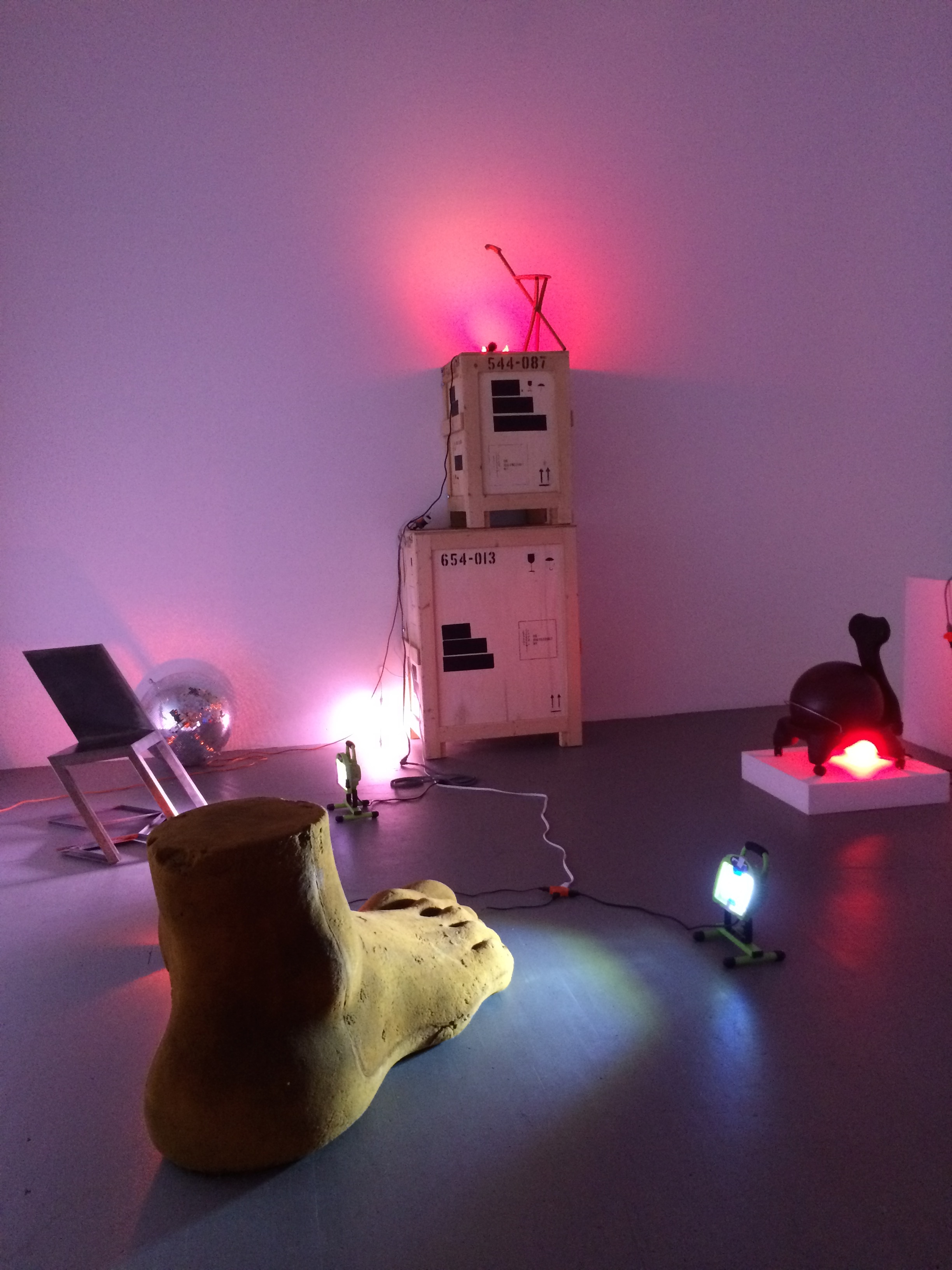 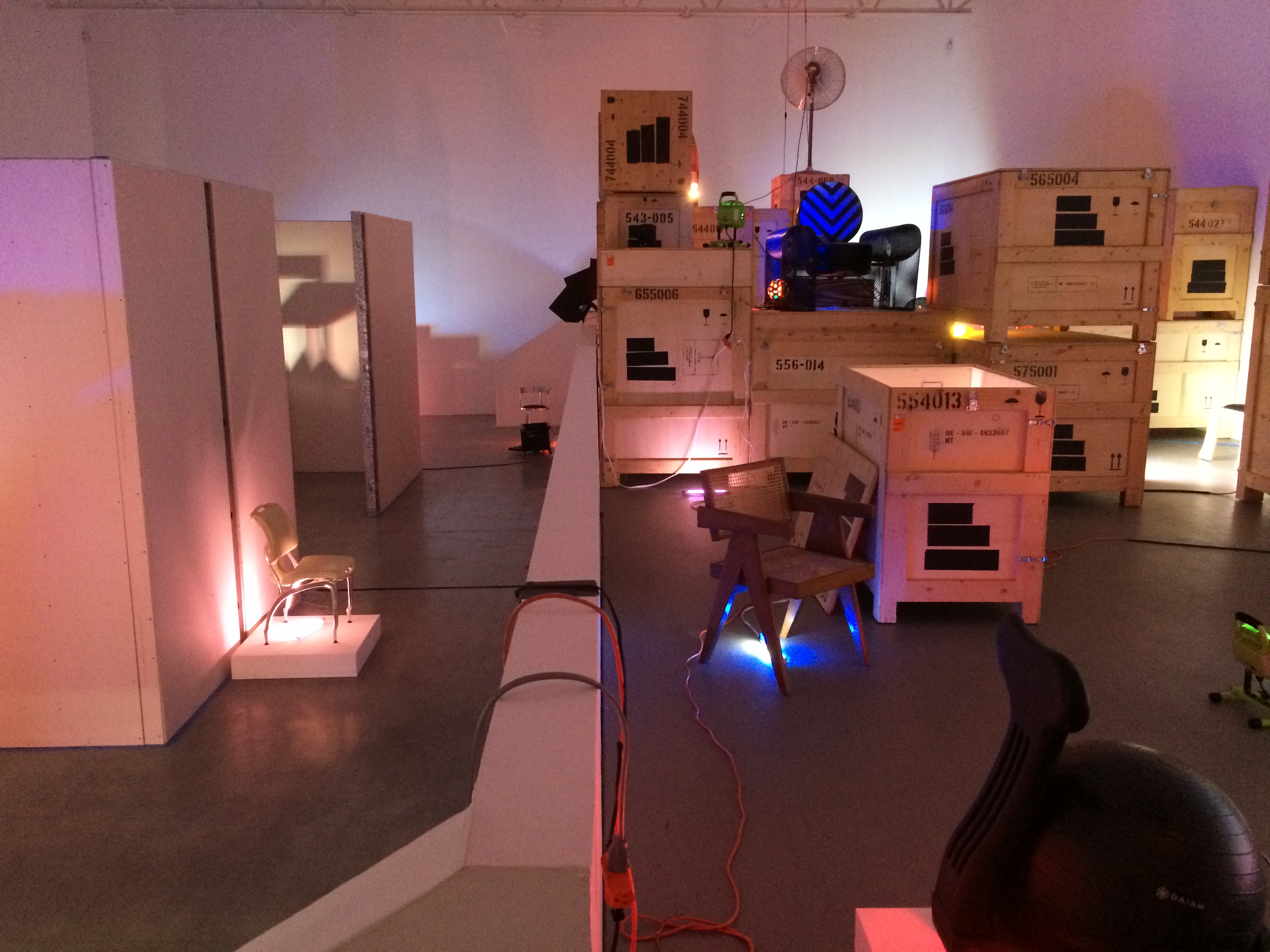 At this moment the audience would have in front of them … empty chairs on an empty stage decorated with streamers, littered with useless confetti, which would give an impression of sadness, emptiness and disenchantment such as one finds in a ballroom after a dance; and it would be after this that the chairs, the scenery, the void, would inexplicably come to life … upsetting logic and raising fresh doubts. –Eugène Ionesco

Fresh doubts. I know the feeling. For now, I think I’d rather sit in a kite fortress, where all is safe and cheerful.

…Or I could go to the utopic Reanimation Library, where I took my Archives, Libraries + Databases class on a gorgeous Saturday afternoon for our annual field trip. Once again, we had a fabulous time there with Andrew, and afterward, with the folks at the Interference Archive. We then debriefed over pie at Four & Twenty Blackbirds. In all, a lovely day. 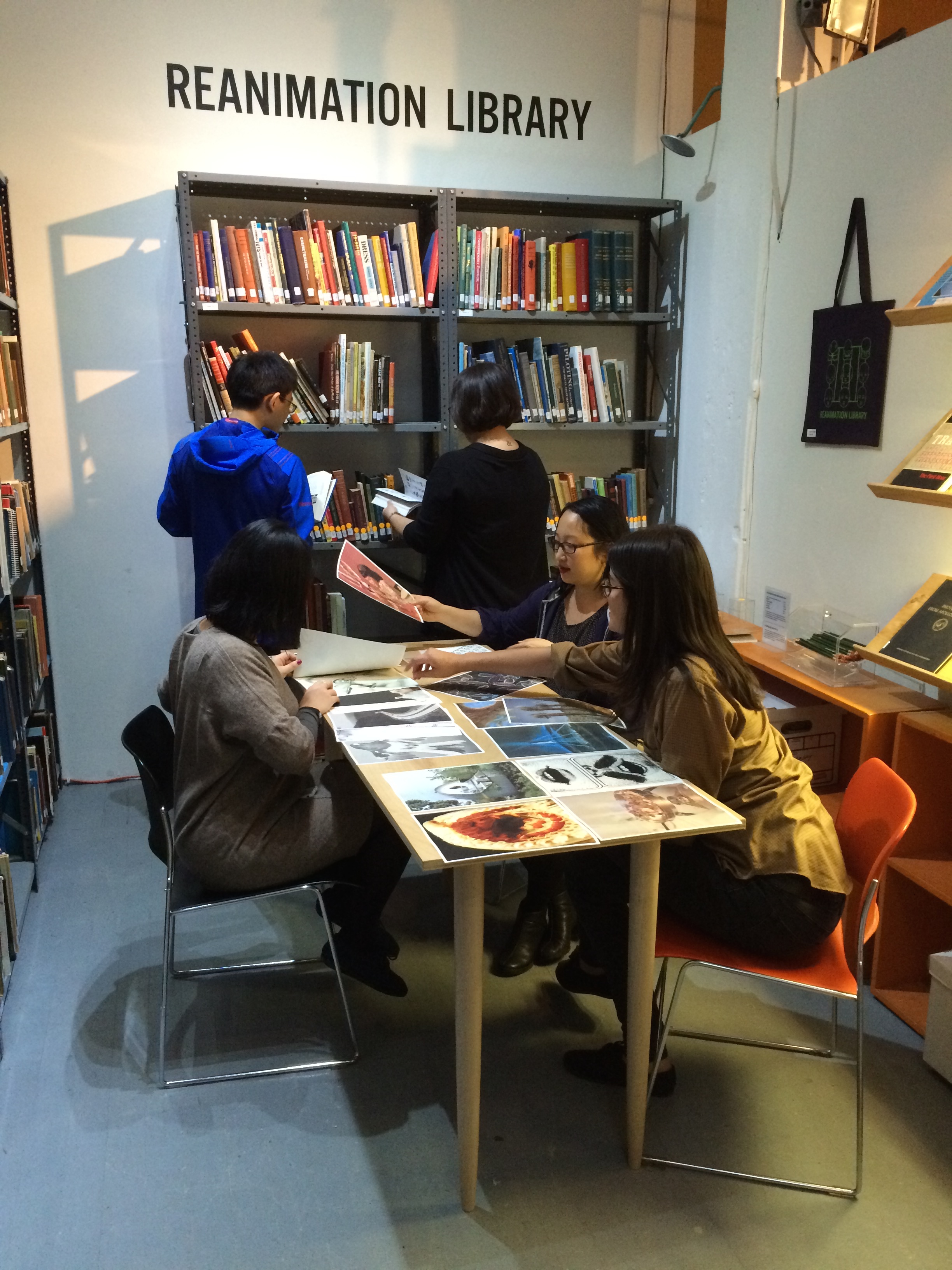 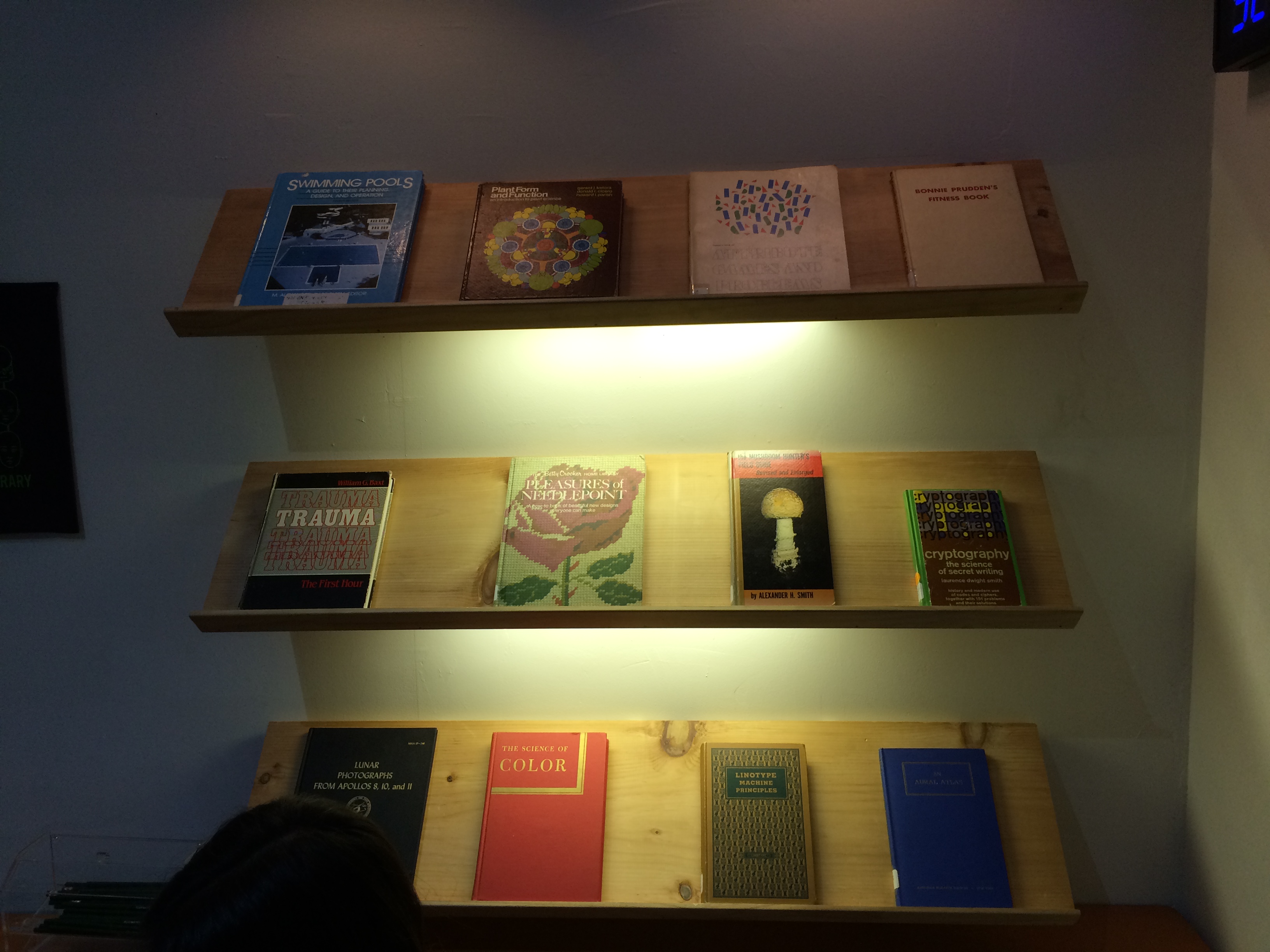