On Tuesday evening I’ll be joining writer Valeria Luiselli, author of Sidewalks and Faces in the Crowd, and Coffee House Press’s Jay Peterson at Poets House, where we’ll discuss Valeria’s residency at Poets House, and the creative potential of libraries as both source material for and subjects of creative investigation. The residency was supported by CHP’s “In the Stacks” program, which Jay describes as follows: “What we hope to do is to inspire other libraries to collaborate in this way, in a way that provides the writer and artist space and time to work on their own project and create something that helps promote the library and the great things that libraries are able to do for people.”

Much of Valeria’s work (I’ve read, and thoroughly enjoyed, her two books) focuses on the intersection of poetry, architecture, and archives; the organizers saw some parallels to my own interests, which is why I was invited to take part. I’m honored. CHP published a little interview with me late last week. And here’s more info about the Tuesday event. 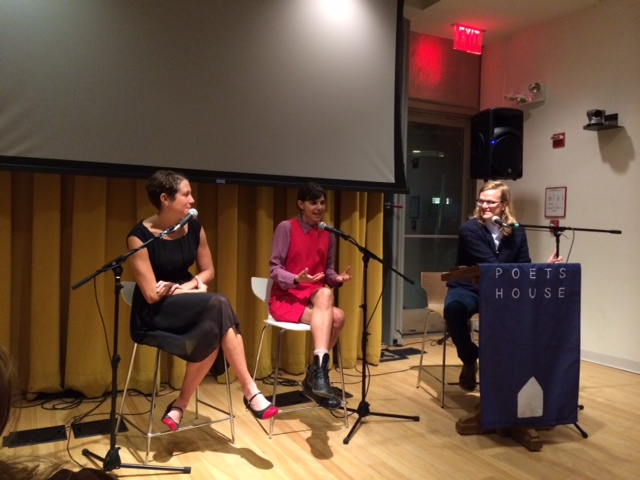 I was asked a few questions in the interview that didn’t make it into the final, published post. No wonder: I was far too long-winded. Still, I figured I’d share that excised material here:

They asked me about how Poets House is situated in place — particularly how it relates to its neighborhood:

And as for the site: well, it’s complicated. Battery Park City, despite the fact that it’s in the general vicinity of New York’s earliest settlements, is only a few decades old. It’s essentially a massive, master-planned, public-private real-estate development that was built atop sand dredged from the New York Harbor and landfill from the construction of the World Trade Center. It’s got a lot of cookie-cutter high-rise luxury condominiums, and pretty much no affordable housing. That said, it does have resources that serve the entire city, freely. It’s got gorgeous parks; I’m there quite often, since it’s the end-point in my bike rides and walks along the Hudson River. And there’s some degree of cultural energy in the area: they’ve got the Museum of Jewish Heritage; Stuyvesant High School, one of the most selective magnet high schools in the city; the modest and moving Irish Hunger Memorial; some great poetry-infused public art; a beautiful public library (funded in large part by Goldman Sachs, appropriately enough, given Wall Street’s proximity); and the Skyscraper Museum. The Lower Manhattan Cultural Council and other public arts organizations organize a lot of great arts programming along the waterfront there, too.

What trends are you seeing in the design/re-design of libraries and archives? In your opinion, are the designers and architects thinking about the creative potential of libraries in the right way? Or in a way that will endure in years to come?

I wrote about this a few months ago. And I’m currently working with the Architectural League of New York and the Center for an Urban Future to oversee a design study of New York’s branch libraries; we’re considering some of these new design trends. I’m seeing much greater focus on community spaces, event spaces, labs, and “maker spaces,” where patrons translate the insight and inspiration they gain from the collection into new knowledge. As I noted earlier, many institutions create opportunities for patrons to “activate” the collection through discussion, or through the creation their own writing, media productions, or artwork. Similarly, archives are incorporating more sophisticated physical exhibition spaces (I discussed this a bit in my plenary talk lat the Rare Books and Manuscript librarians’ pre-conference at the 2014 ALA gathering) and promoting more digital experiments that filter or curate archival material.

While I’m wholly supportive of these efforts to recognize making, doing, craft, etc. as forms of knowledge-production, and to create spaces for this activity in the library, I’m often distraught to hear how often these efforts are framed through the rhetoric of “innovation” and “entrepreneurship.” While I’m all for trying and building new things, I think our pursuit of innovation for innovation’s sake — particularly “innovation” as framed by Silicon Valley ideology — can be toxic Sure, the library can serve as an entrepreneurial hub for some folks; they can research patents, develop business plans for their new web apps, and host hackathons to strategize the monetization of new datasets. But the library also has to carve out spaces of exception from these market ideologies. The thinking and making we do in libraries needn’t always be in pursuit of “the new” and the profitable.

I should also note that some libraries are experimenting with temporary spaces and outposts; they’re occupying storefronts, deploying pop-ups, finding new ways to bring themselves to the community, and encouraging the community to come to the library. I could see special collections taking their show on the road, too.

2 replies on “In the Stacks @ Poets House Tuesday Evening”

Ah! I just saw Valeria talk on Friday and had the pleasure to talk with her shortly afterward. Faces in the Crowd is so unbelievably good. Have fun on Tuesday!

Thanks, Josh! What a lovely coincidence!