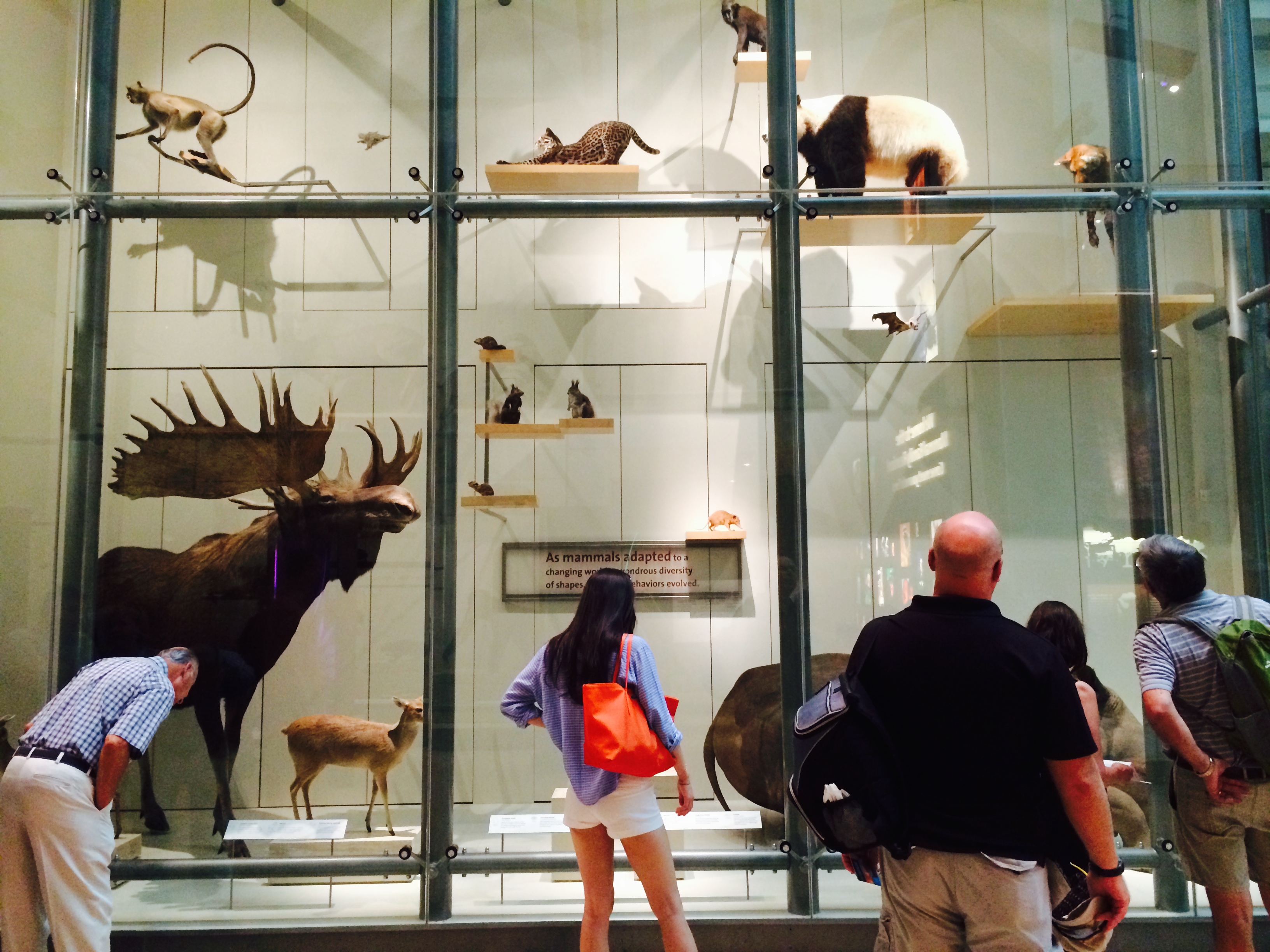 National Museum of Natural History
It’s been a week of constructed views. I started off last week in Washington D.C., where I gave one of the opening plenary lectures at the Library on Congress’s Digital Preservation conference and spoke quite a bit about the constructed — and de-constructed — aesthetics of preservation. And of course L’Enfant’s plan for D.C. itself, full of monuments and grand buildings, emphasized (or, rather, forced) majestic views. The museums along the mall, too — many of which I hadn’t visited since I was a kid — offered a variety of case studies in the rhetorics of display. 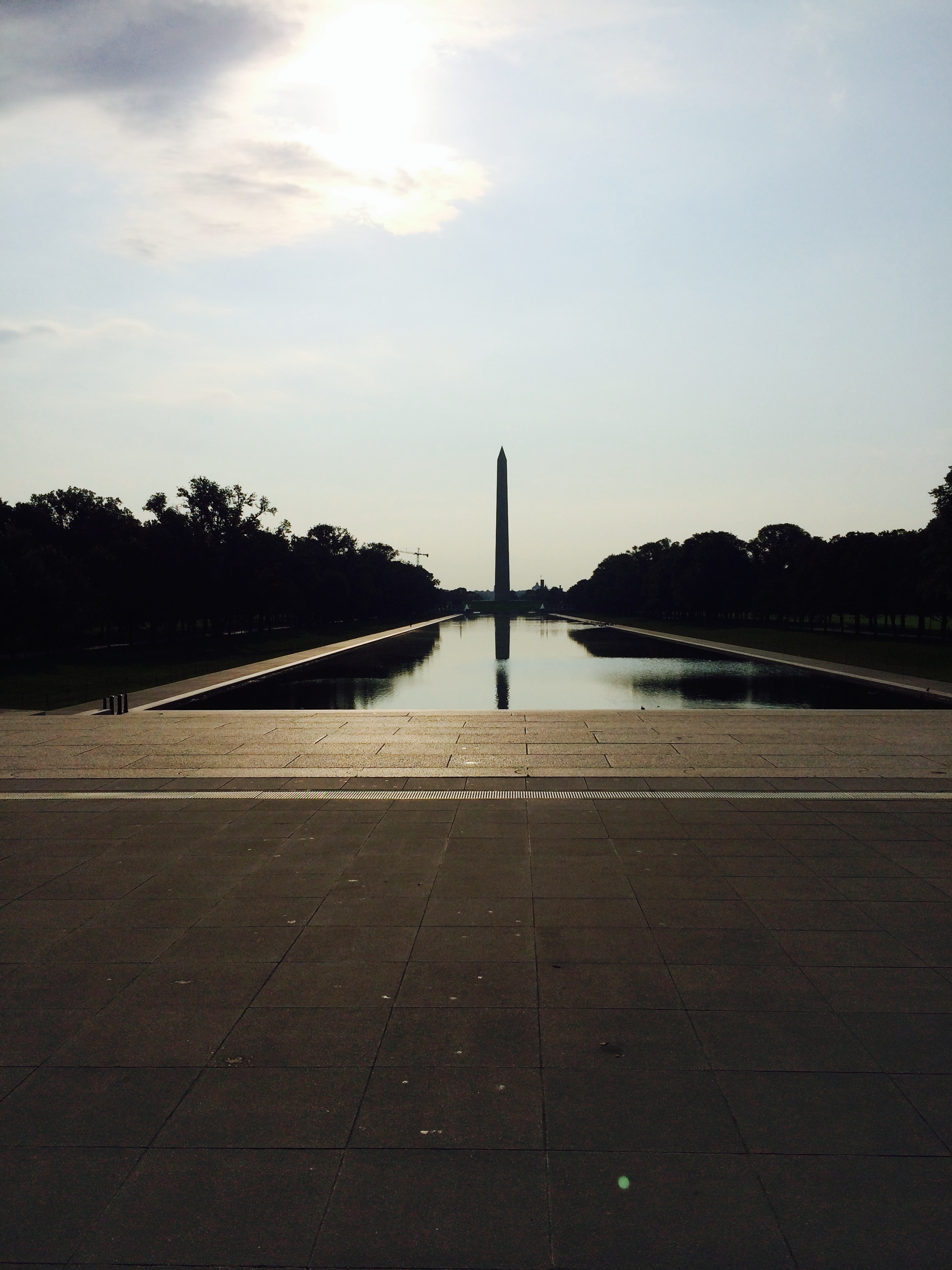 A brief aside: shortly before heading south, I enjoyed some lovely sunsets from my roof. 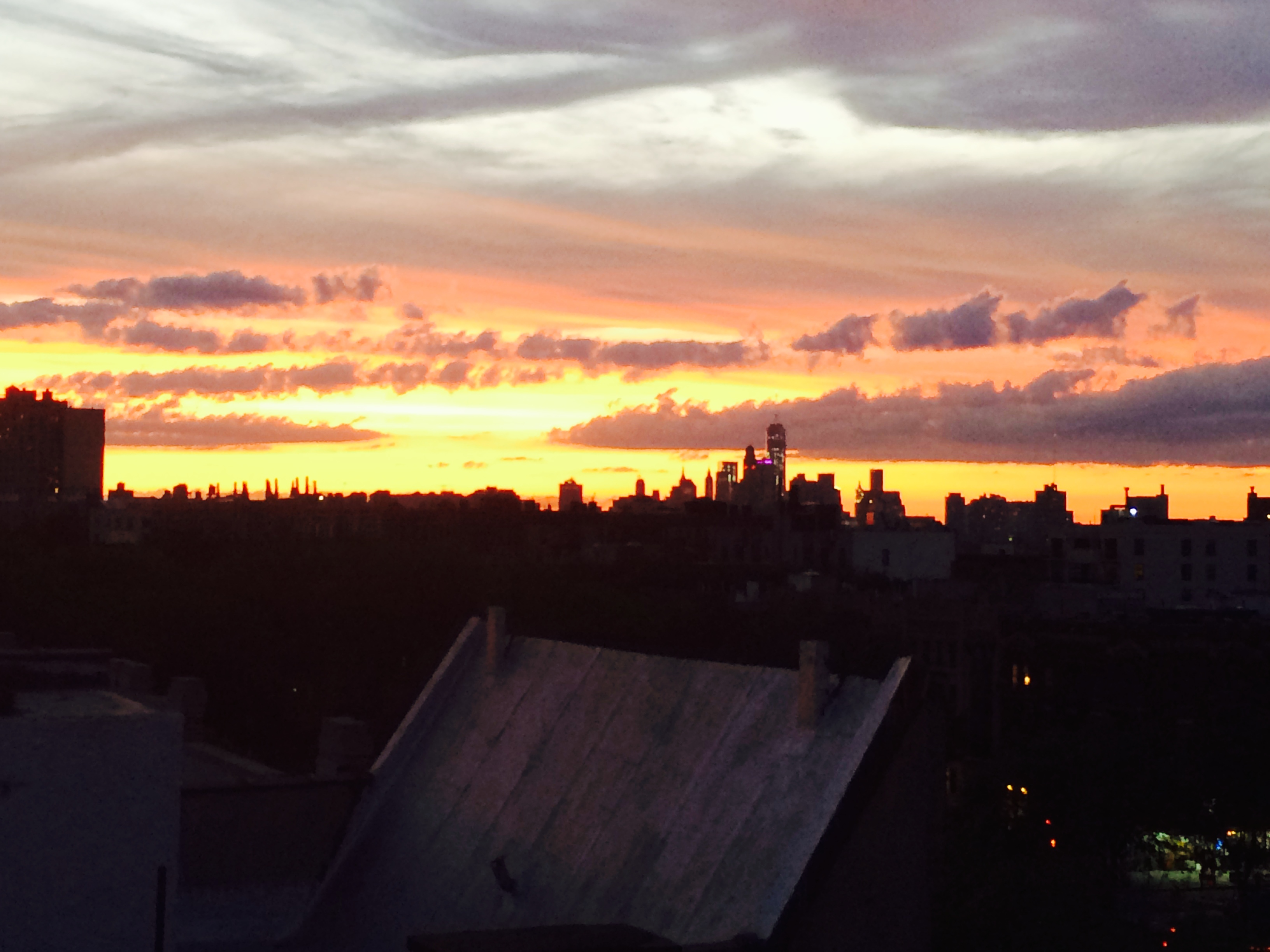 And when I got back to NY, I checked out “Another Look at Detroit,” a show, conjoining the Marianne Boesky and Marlborough Chelsea galleries, that examines the city’s past and present as a creative center. I love, love, loved how the show was staged — with so many fabulous formal, textual, and temporal juxtapositions. The presentation implied how place-based movements and geographic “scenes” take shape, with many lietmotifs resonating across art forms. Political economic and cultural contexts, climate, topography, industry, even signature urban and architectural forms, etc., can conspire to give rise to geographically-informed aesthetics, across all media. [Update: August 5: see the Hyperallergic review, which addresses the exhibitions’ whiteness and “lite” politics.] 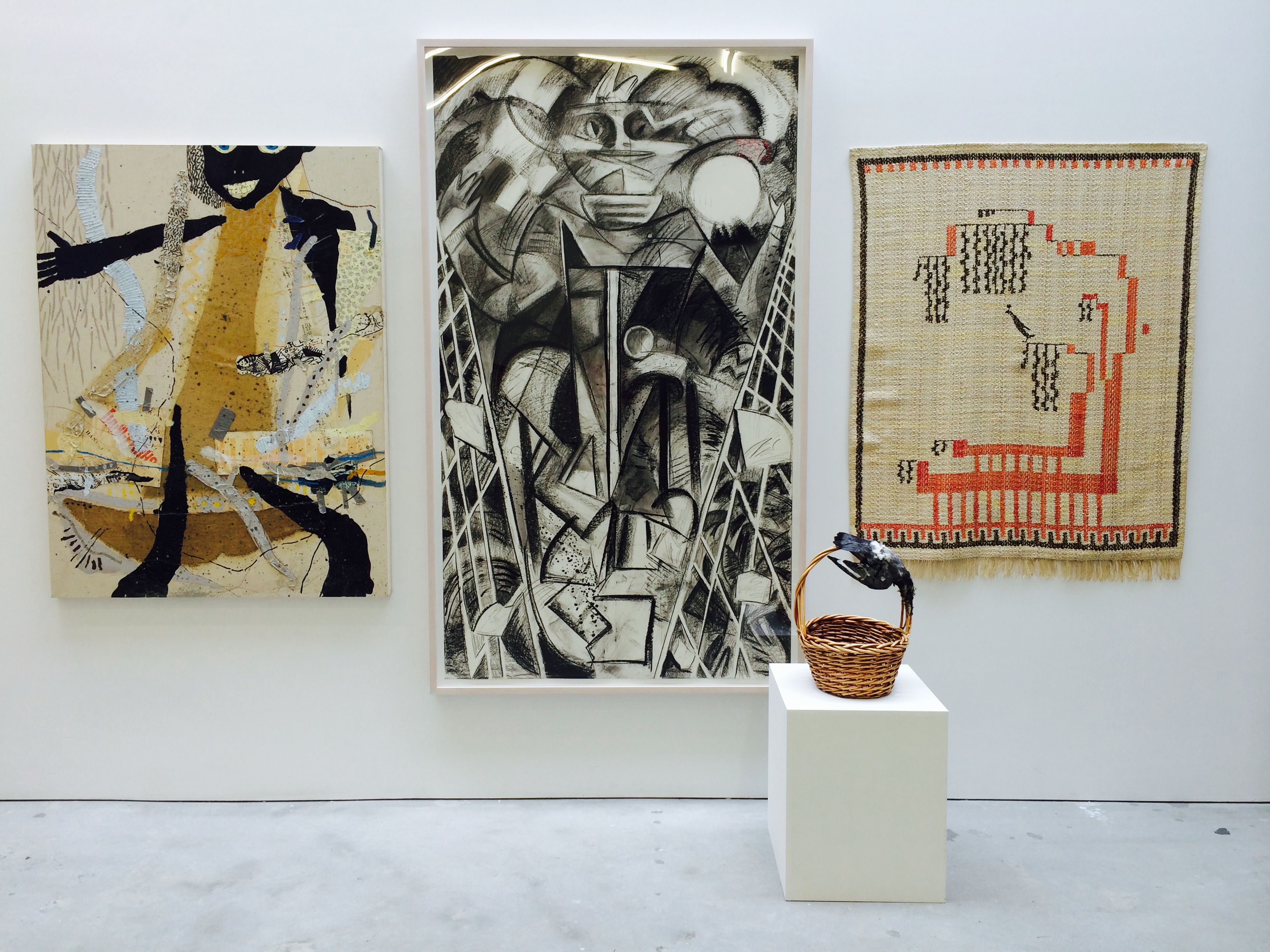 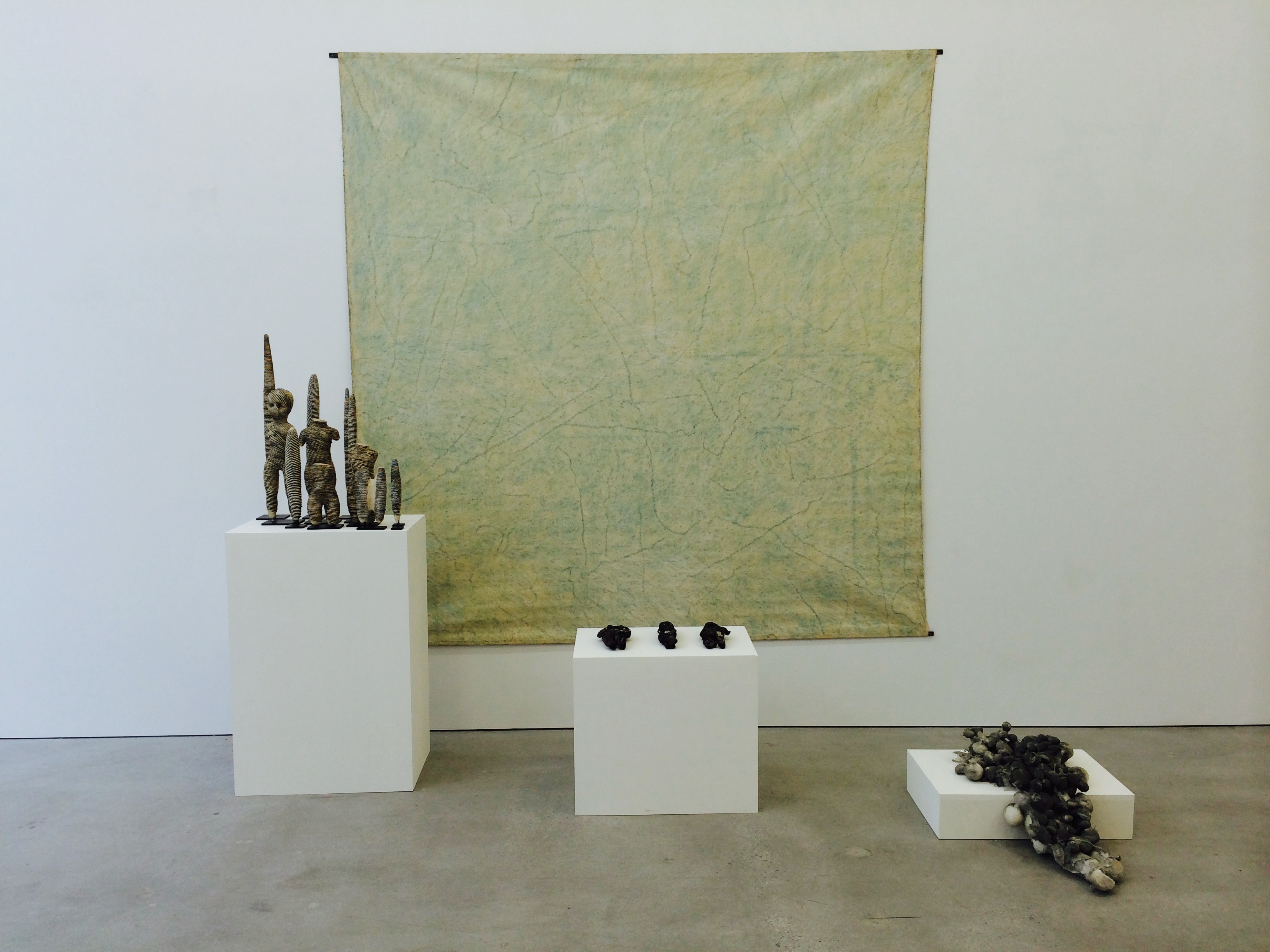 Then, continuing in the “self-conscious display,” or “rhetorics of presentation,” theme, I visited Matthew Higgs’s “Displayed” at Anton Kern. As Ken Johnson wrote in the Times,

When you exhibit a work of art, there are two things going on. There’s the object and there’s the presentational apparatus, which might be a frame, a pedestal, a shelf or a vitrine. Also involved are the gallery architecture, the structure of the exhibiting institution and, in the broadest terms, the art world social system. Usually, viewers are supposed to focus on the object and take for granted the apparatus.

At Kern, Higgs, director of White Columns gallery, has highlighted those apparatae by, well, displaying works that are representative of what he calls “displayism”: they “explore the methodologies — both formal and psychological — of display and presentation. Borrowing from the languages of architecture, the museum, interior design, retail, and advertising among other disciplines, the works in Displayed variously consider our shifting relationships with (but of course!) — and attachments to — objects and the circumstances in which we encounter them: whether it be the gallery, the store, the street, the home, etc.” (These  themes were also palpable in Kristen Morgin’s “The Super Can Man and Other Illustrated Classics” and Dominique Gonzales-Foerster’s “euquinimod & costumes,” which I saw and wrote about a couple months ago.) 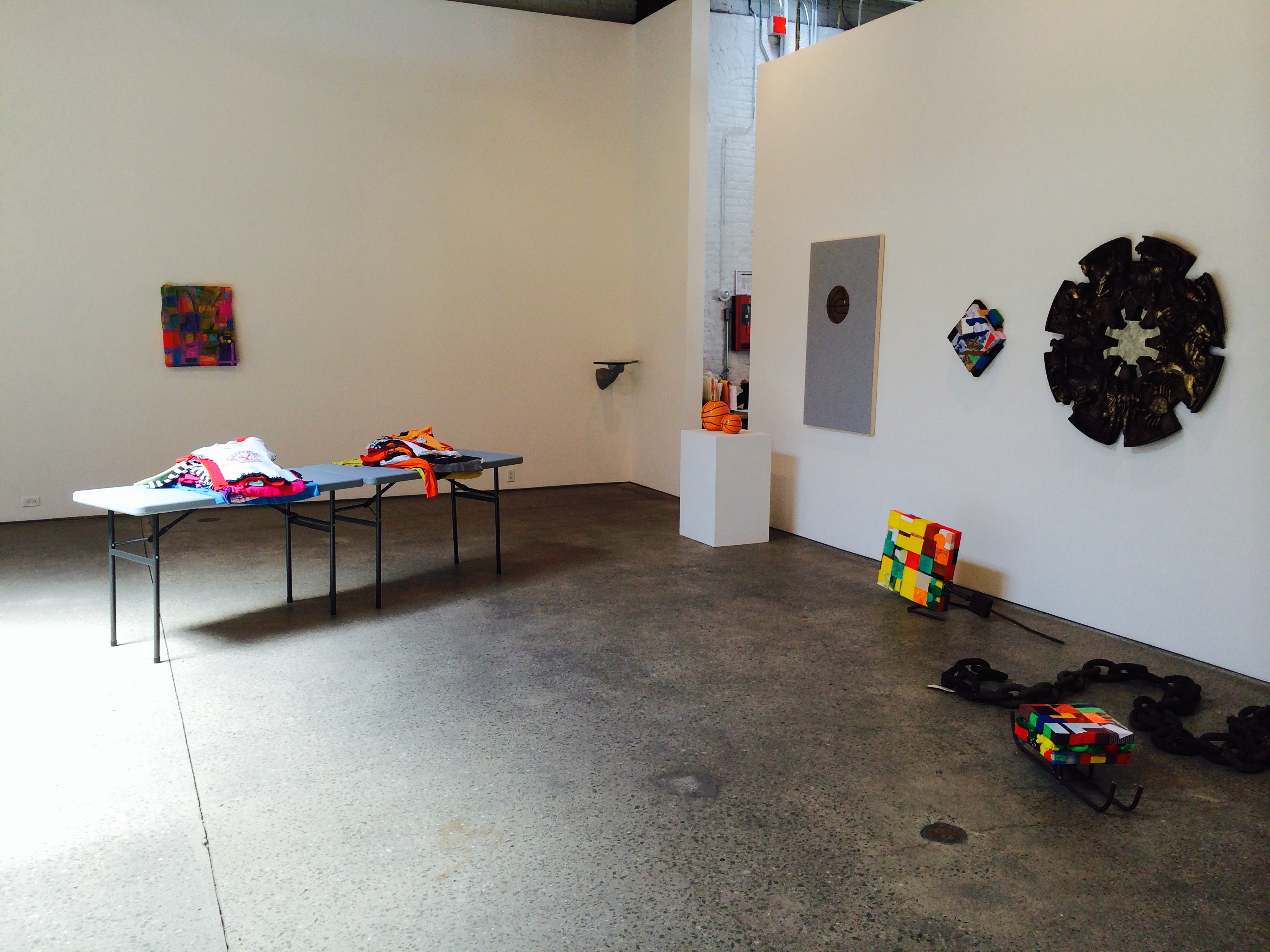 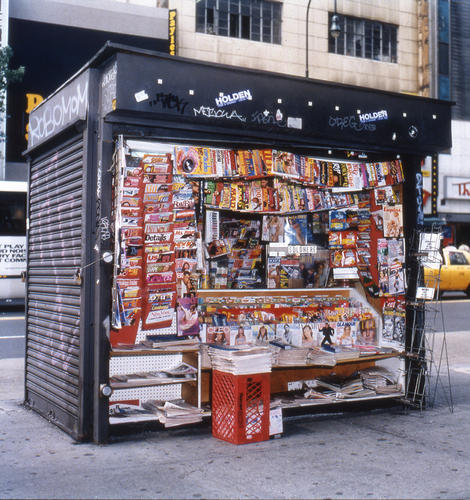 Then, uptown to Gallerie Perrotin’s Kate Ericson & Mel Ziegler show, which features the pair’s community-based artwork from the 80s and 90s, up through Ericson’s death in 1995. This show totally captivated me — and not only because of the regularly ordered displays: the racks of jars and rows of tools. Seen en masse, the work’s understated politics becomes clear: here’s an attempt to distill and order, through basic elements — color, water, food, language — the identity of a community, of a place.

Below, on the ground: A Long Line: “22 antique toy dump trucks carry a load of fractured marble pieces sandblasted with texts from used history books.” 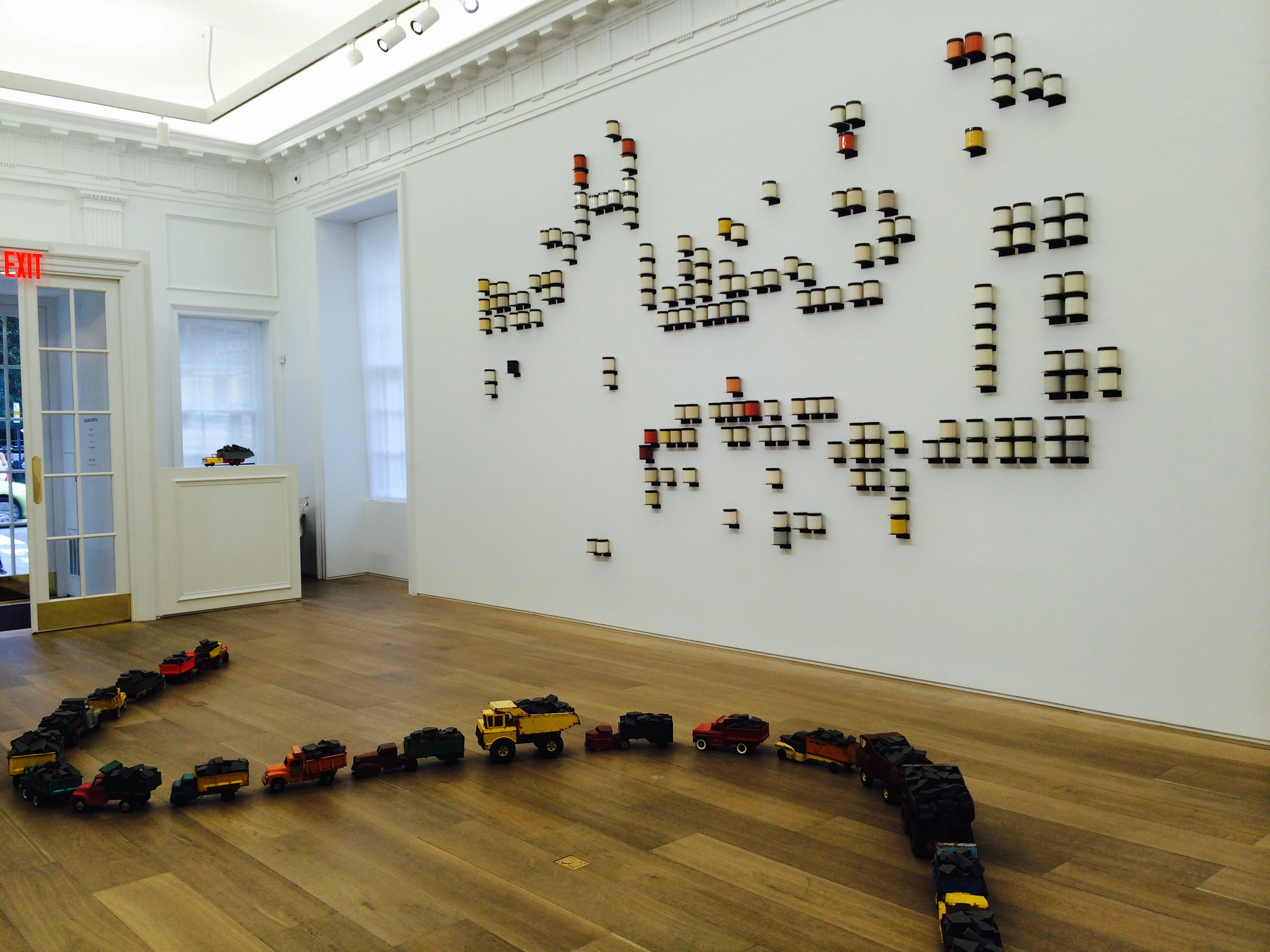 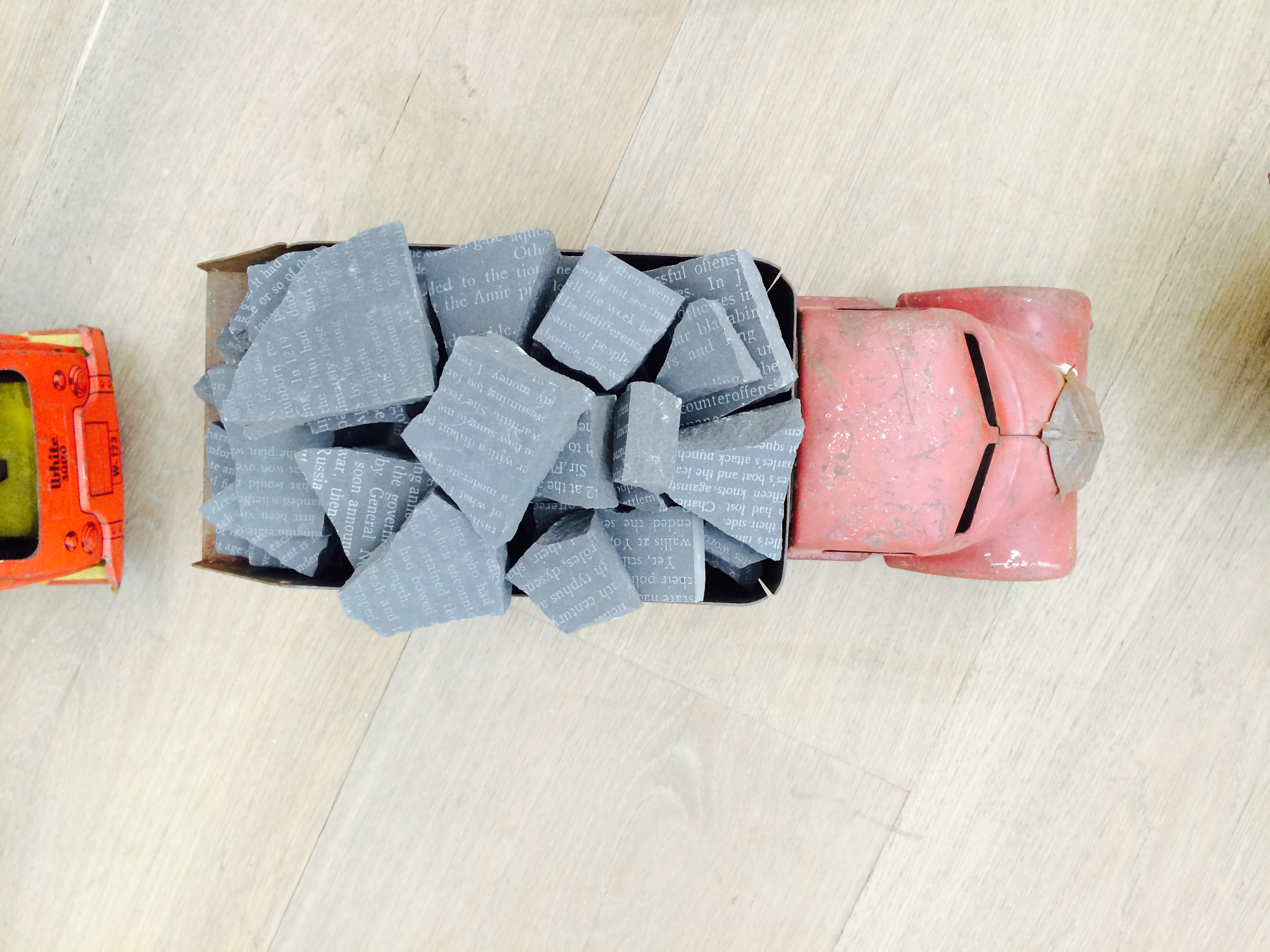 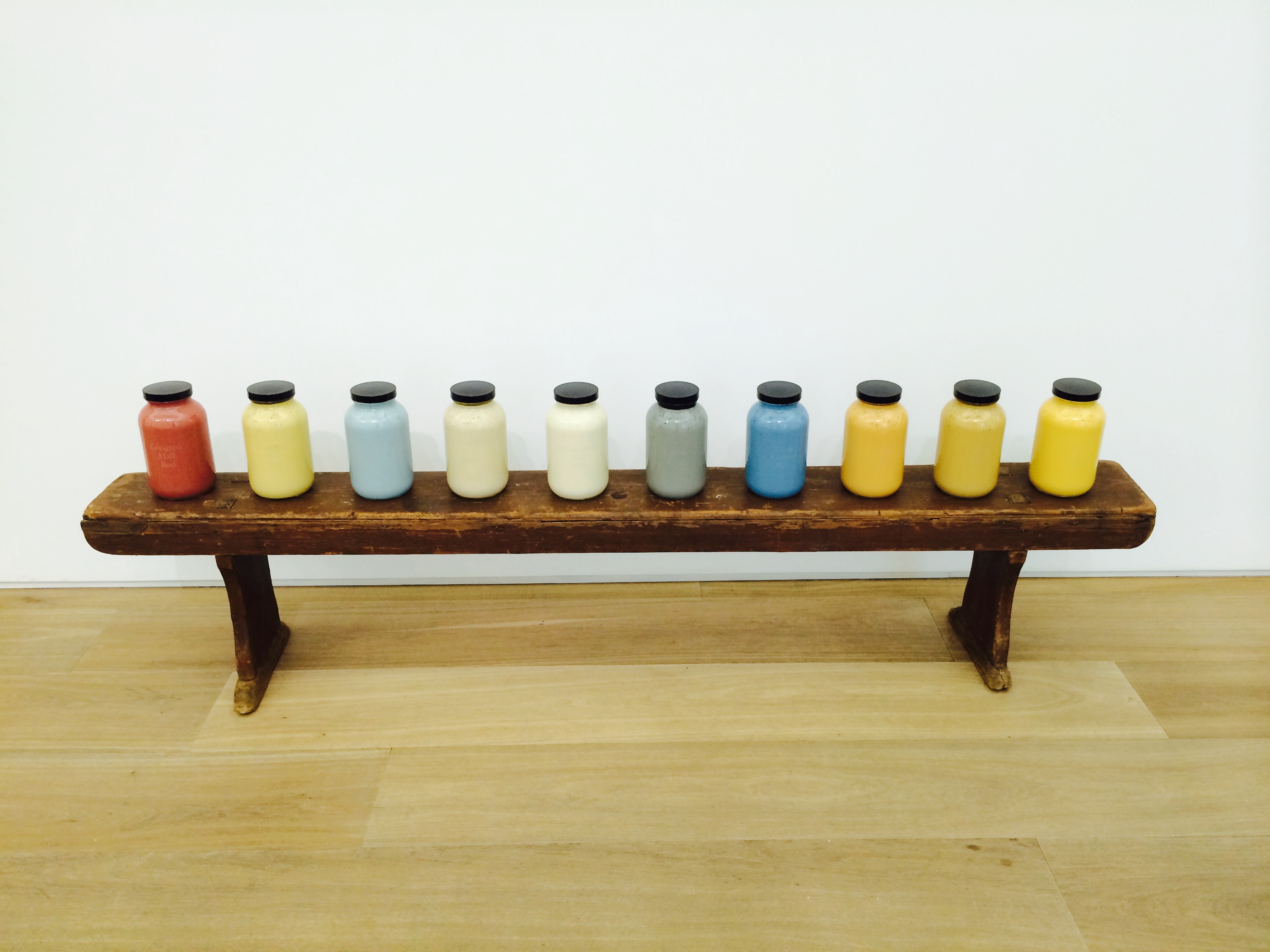 Above: The Authentic Colors of Historic Philadelphia: “Displayed on an antique wooden bench, these ten jars contain different paints and are each sandblasted with its corresponding official color name. The colors were chosen from a paint chart that consists of 31 colors, all matched and certified to have been used on the interiors and exteriors of public and private buildings in colonial Philadelphia.” And relatedly…

Below: Dark on That Whiteness, 1998: “These 173 jars are filled with paint, each color matching the exterior walls of a federal building or monument surrounding the National Mall in Washington, D.C. The installation maps out the neighborhood, with each jar installed according to the corresponding building’s location. The jars are sandblasted with the commercial name of each color from the paint manufacturer. The title of the piece is a quotation from the nineteenth-century sculptor Horatio Greenough, which describes the dark red color of the stone used for the Smithsonian Institution building….”

And more from D.C, below: Where the Water Goes: “The water int these jars was collected from three sites in the Washington, D.C. area. On the left, the water was collected from the Upper Potomac River, north of the aqueduct that supplies the city with water. The nine center jars contain water from each of the nine sinks in the public restrooms of the United States Supreme Court. On the right, the jar is filled with water from the Lower Potomac River, downriver from the city’s primary wastewater treatment facility.” 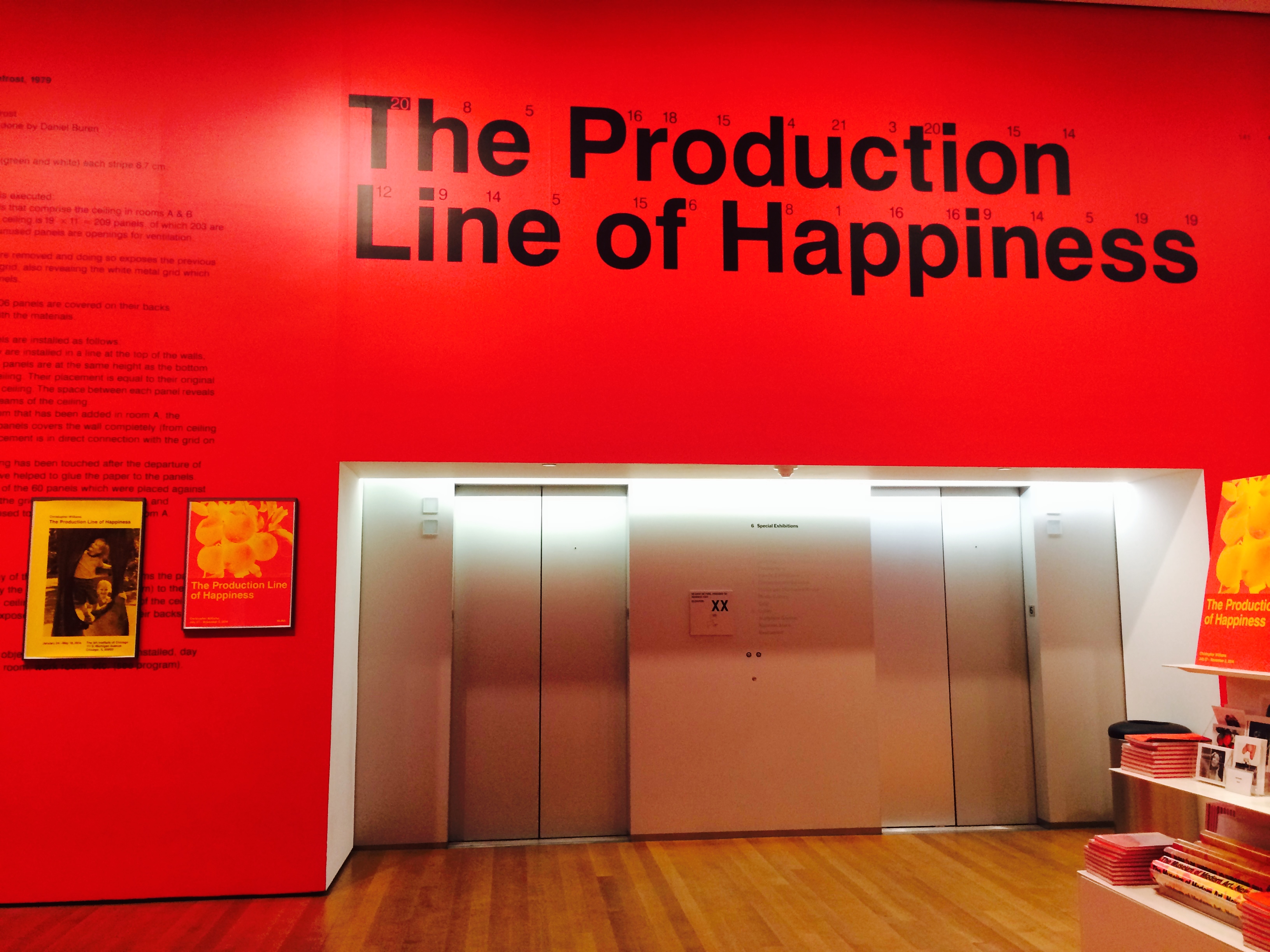 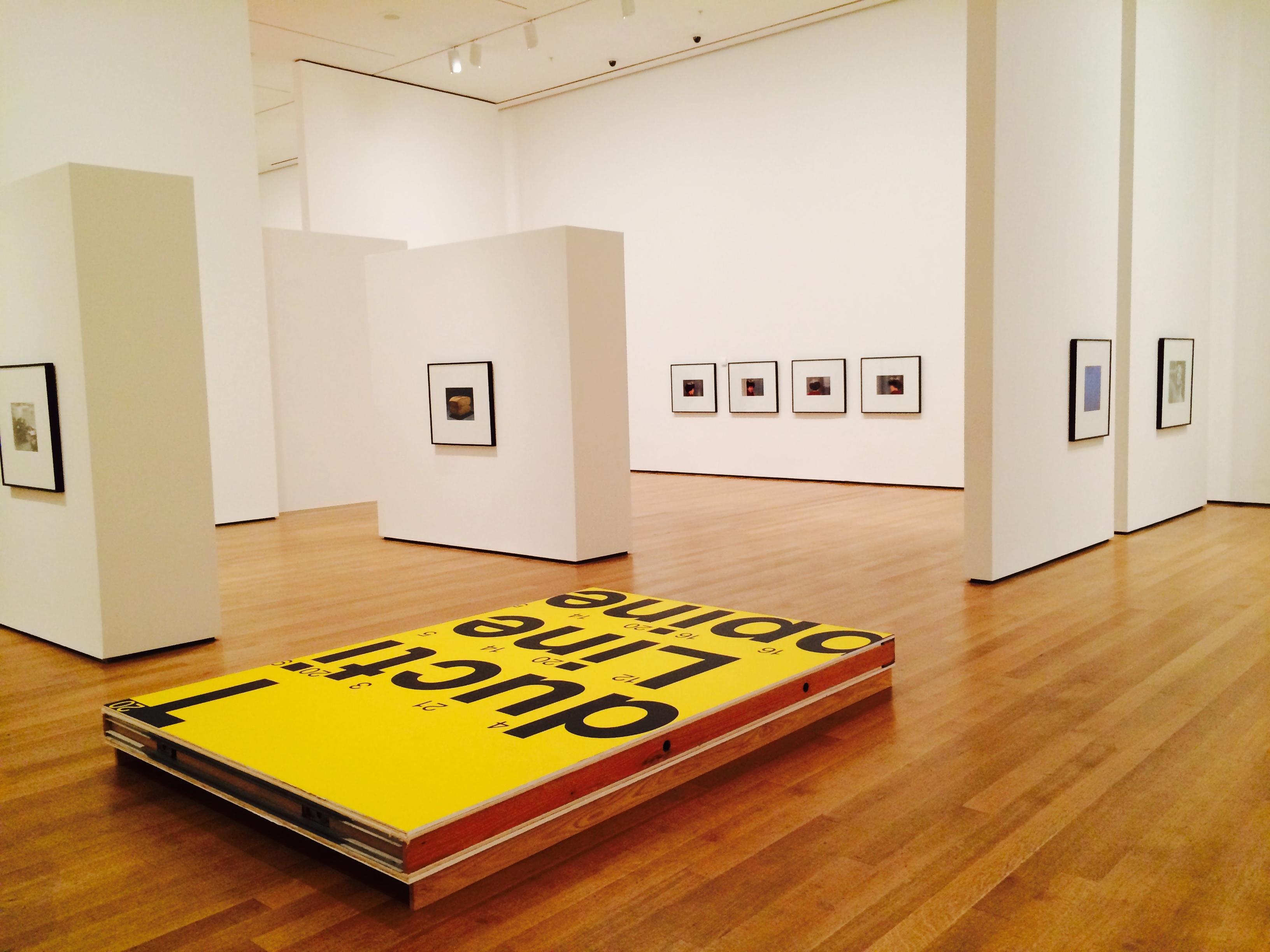 Finally, Ericson and Ziegler’s interest in color and identity followed me downtown, to MoMA, where I saw Christopher Williams’s “The Production Line of Happiness” (a line drawn from Godard, with all kinds of obvious allusion to Marxism and myth). Here, color is tied to brand — in this case, the brand-name materials (Kodak, Fuji, Pantone, etc.) integral to manufacturing idealized images. Just as Higgs’s exhibition highlighted the integrated apparatuses(ae) of “displayism,” Williams’s work and the show’s exhibition design operate in tandem to make manifest the various apparatae of image-making, image display, and perception — we see the guts of cameras, the guts of galleries’ temporary walls, light meters, color correction gradients, coolers of film — and how those technical systems (all described exhaustively in lengthy captions, none of which, notably, are presented on the walls, but are instead made available in the text-heavy, clinical exhibition guide) work together to produce meticulously “constructed images” that define our (consumer) ideals, that determine for us what constitutes “happiness.”

As Villem Flusser states in his “Photo Production” lecture, reproduced in the exhibition catalog:

[I]mages are potent models. If one calls models of experience ‘art,’ models of knowledge ‘science,’ and models of evaluation ‘ethics’ or ‘politics,’ it becomes evident that photographing in the true sense is much more than an artistic endeavor. It is a fully human endeavor, where art, science, and ethics cannot be distinguished from one another. 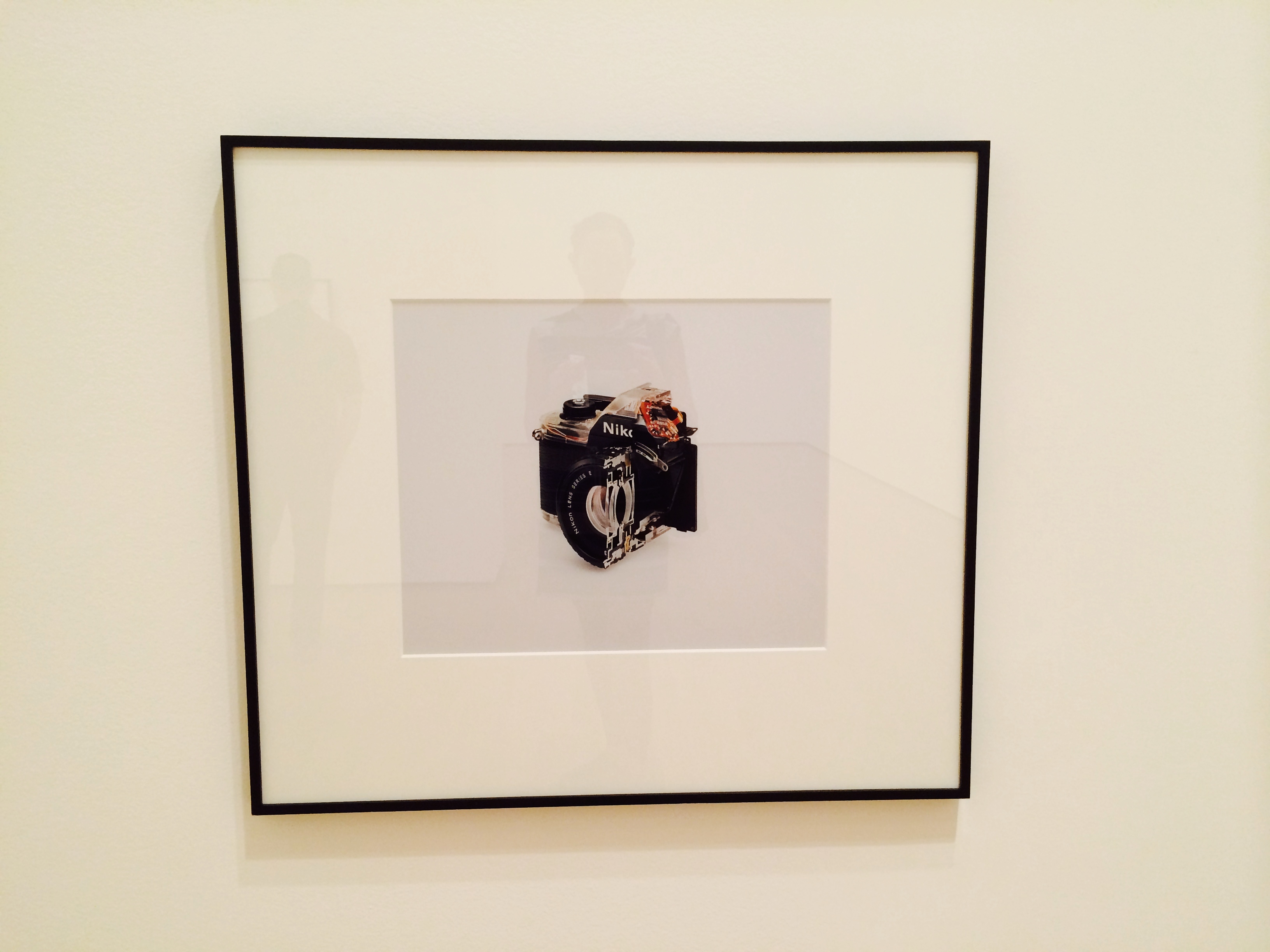 The “true photographer,” he continues, aims to “inform” others while acknowledging the “automatic reproducibility” of his tools. He “is committed against automation,” “engaged in a struggle against apparatus function.” (It’s not irrelevant that both Williams’s father and grandfather worked in movie special effects, as Schjeldahl notes in his New Yorker review).

[The true photographer’s] aim is to force the apparatus to somehow invert its program like a glove, and have it produce that which is unexpected from the point of view of the program. Thus was we have here is the attempt to face the fact that the apparatuses we have produced tend to escape our control, tend to become autonomous of human decision. I believe that this is the context in which we must see the photographer’s commitment: to oppose the stupidity of the automatic disinformation with the human intention to produce, to distribute, and to stock new information, and thus overcome death and become somehow immortal.

Williams makes vision visible. He displays photography’s apparatae of automation, highlights the museum’s discourses of presentation, and denaturalizes the means by which consumer culture and capitalism “produce” spectacles of happiness. 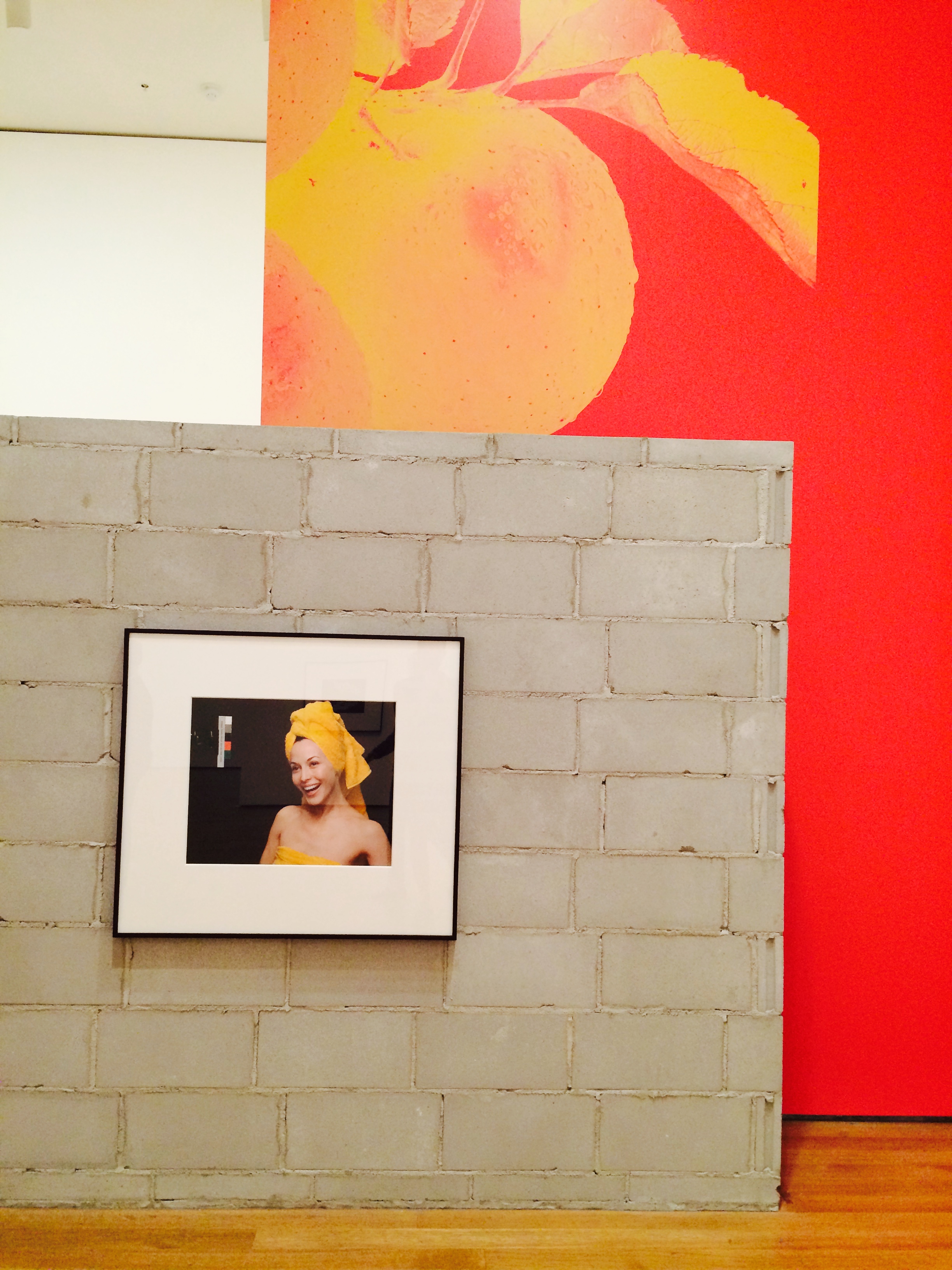 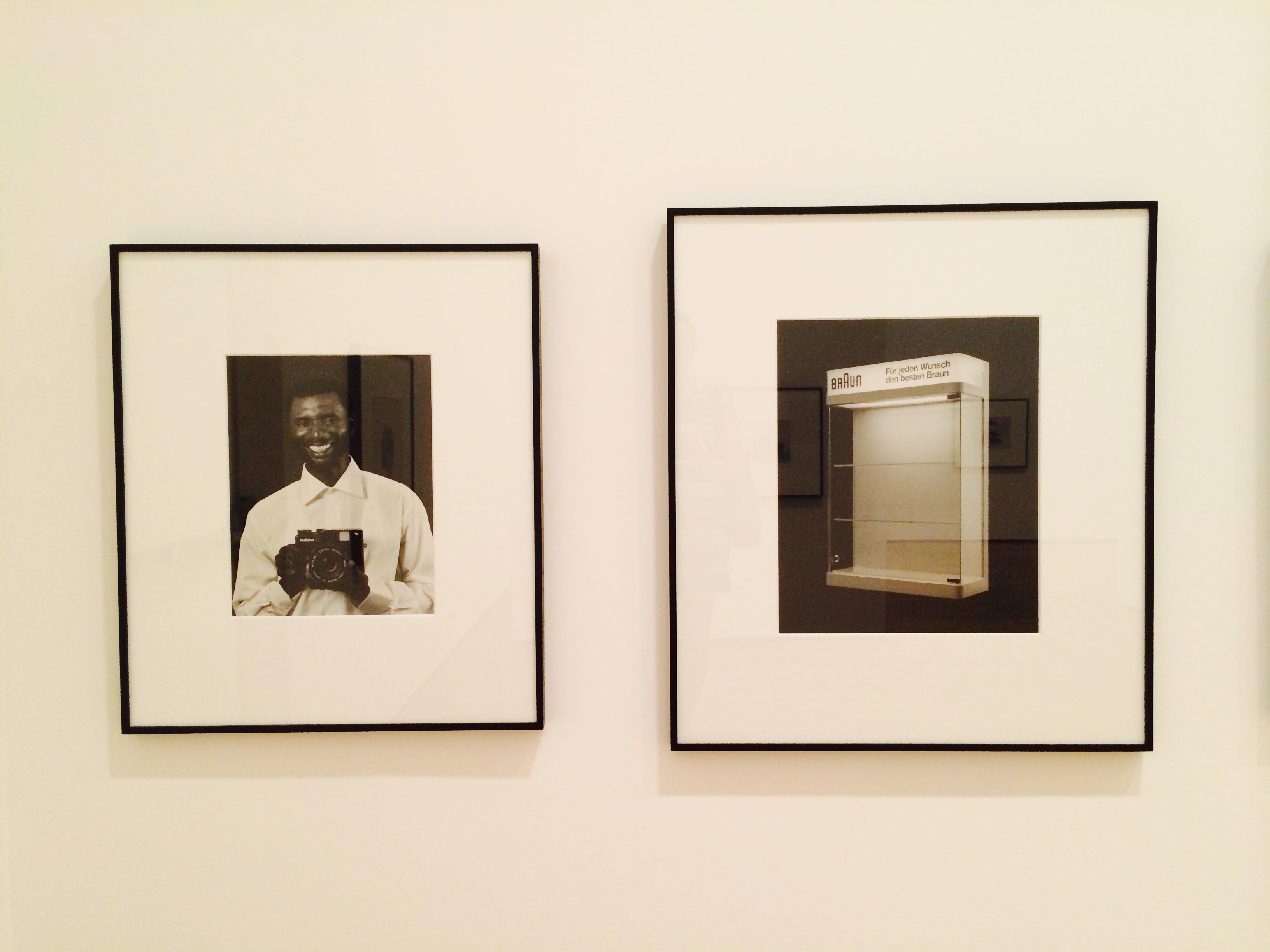