I caught a few shows this week.

First, at Lehmann Maupin: Mikalene Thomas, whose exhibition at the Brooklyn Museum I really enjoyed last year. Here, Tête de Femme mixes cut-outs and screenprints — layered with all the vibrant colors and viscous creams and sparkly doodads women use to adorn themselves — to construct Cubist and Pop takes on portraiture. What I’m about to say next is so cliché and painfully obvious that I choose to subvert the cliché by making it a parody of itself: Thomas is “interrogating” the simultaneously formulaic/templated and personalized/improvised tools and techniques for “constructing” female beauty. 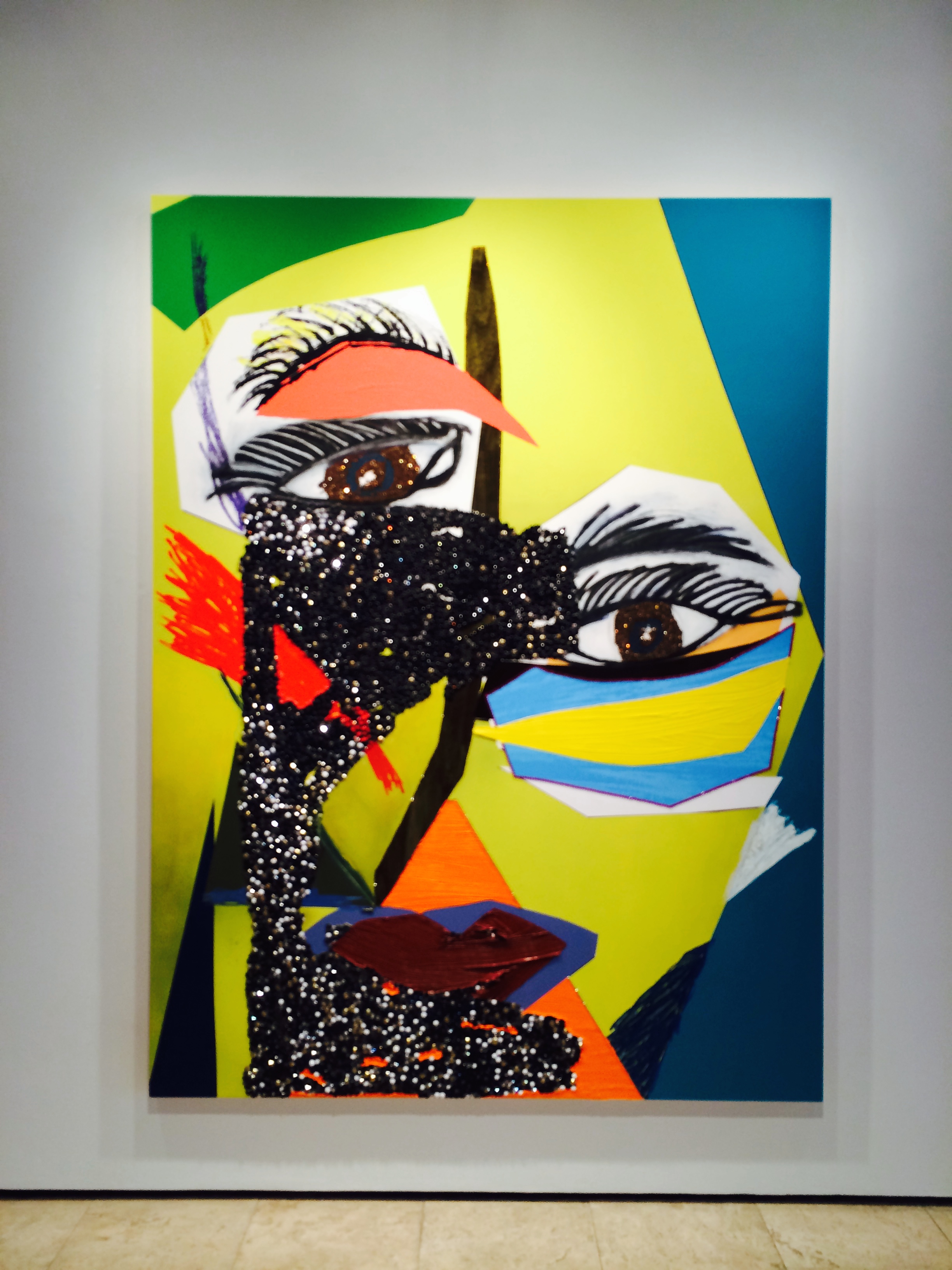 On, then, to the chroma-keyed face of the astoundingly brilliant Hito Steyerl at Andrew Kreps. Her “How Not to be Seen: A Fucking Didactic Educational Installation” — which I’ve been reading about and anticipating seeing ever since last year’s Venice Biennale — is funny and frightening and provocative and profound. Steyerl argues that we live amidst

an avalanche of digital images, which multiply and proliferate while real people disappear or are fixed, scanned and over-represented by an overbearing architecture of surveillance. How do people disappear in an age of total over-visibility? Which huge institutional and legal effort has to be made to keep things unspoken and unspeakable even if they are pretty obviously sitting right in front of everyone’s eyes? Are people hidden by too many images? Do they go hide amongst other images? Do they become images? 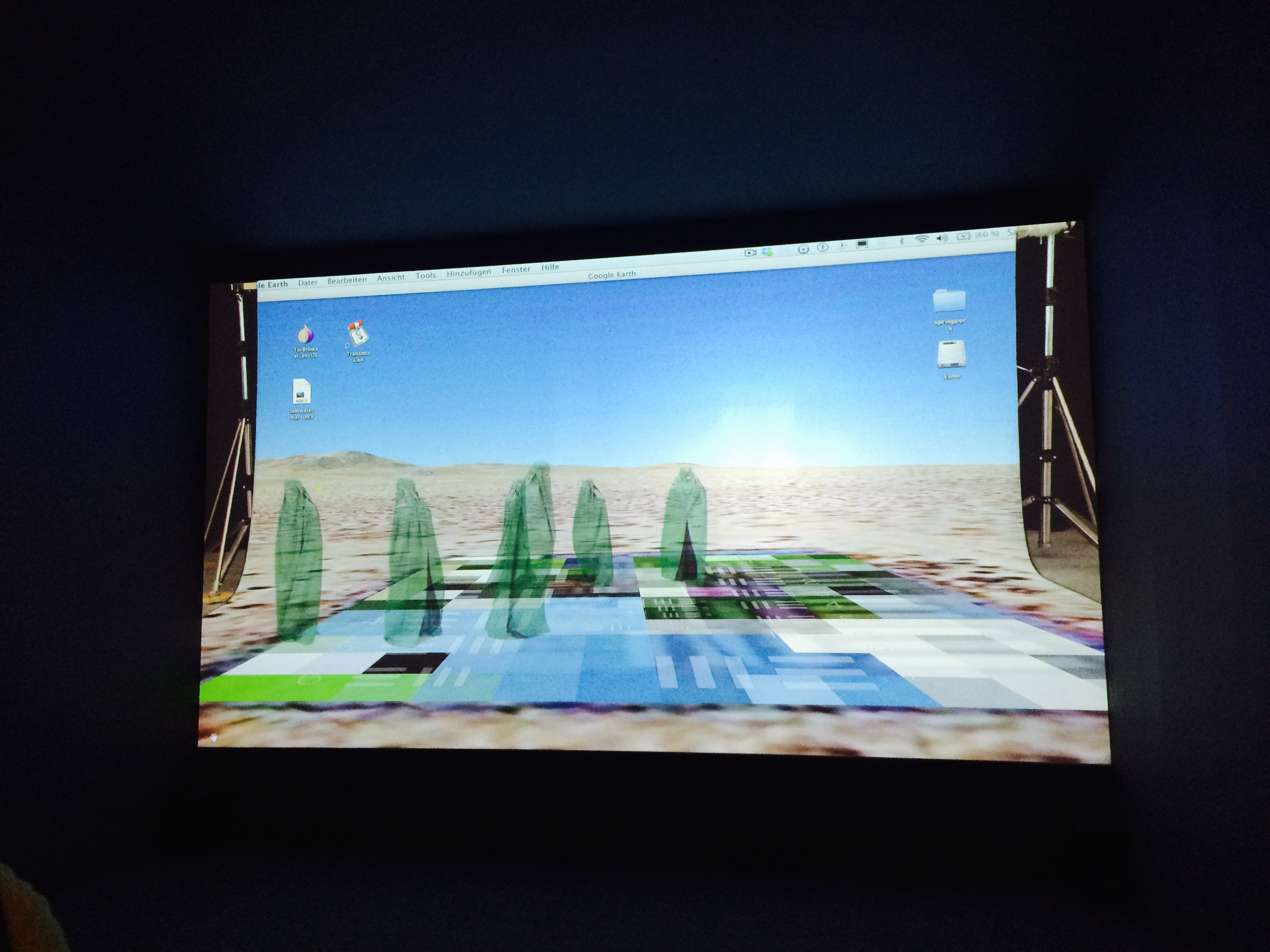 The video — a Python-esque send up of educational films, with a dark Virilio twist — proposes several strategies for disappearance: camouflaging oneself, hiding in plain sight, shrinking down smaller than a pixel, living in a gated community, wearing a full-body cloak, being a female over 50 (ha!). The setting for much of the video — on location in a California desert blanketed with military photo calibration targets, once used to test pre-drone aerial cameras — hints at the presence of ubiquitous imaging technologies that very skillfully make themselves unseen. And this imagery brings to mind the humans now piloting those unmanned aircraft via some computer screen, surveying and obliterating landscapes from a remove — safe and unseen. Yet in “disappearing” ourselves from these present-but-invisible cameras, we run the risk of de-subjectivizing ourselves — of becoming little more than anonymous, interchangeable “scalies,” those CGI’d human forms that exist merely to show speculative spaces “in action,” populating architectural renderings. 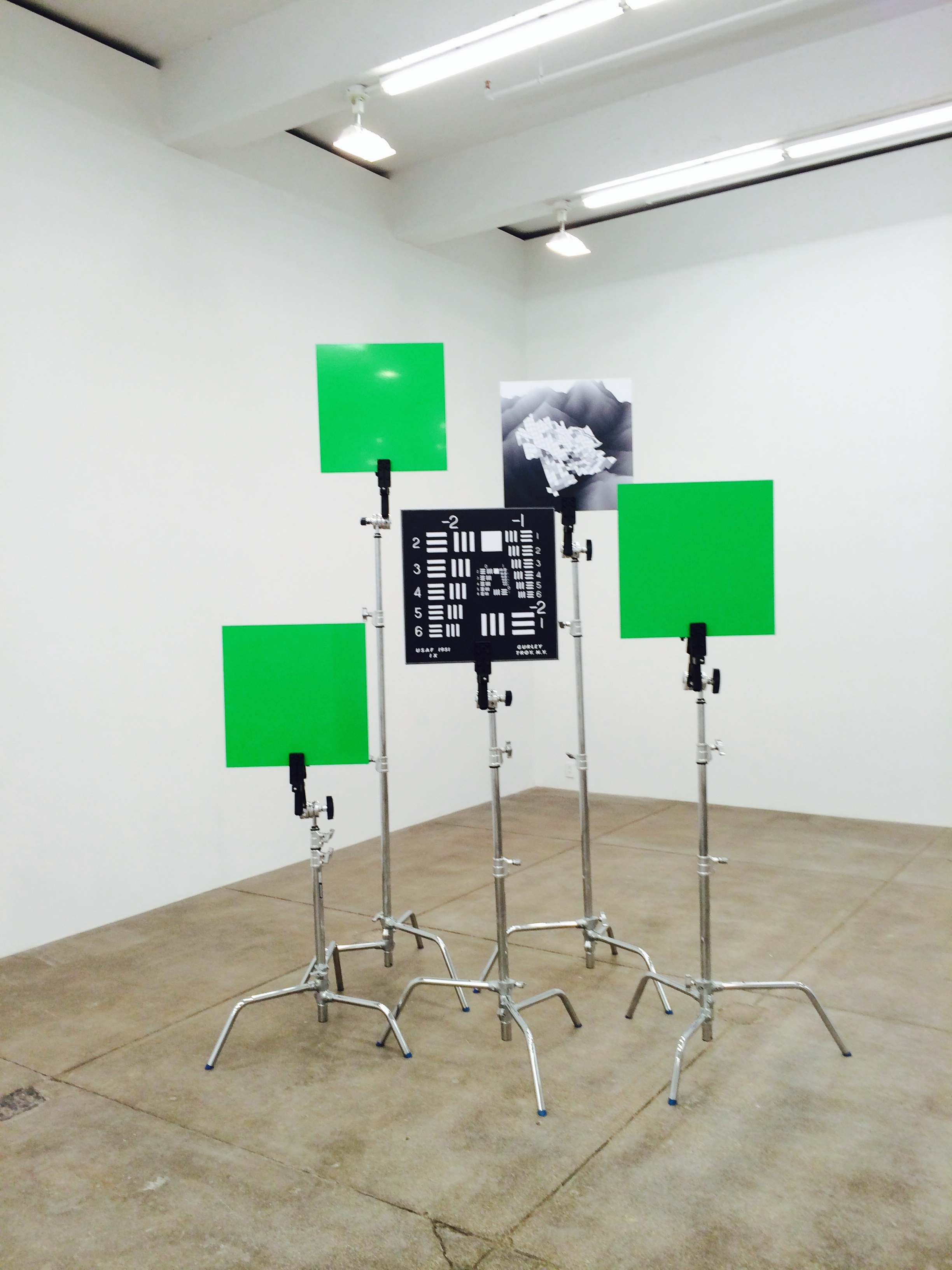 A Frieze review of her show at the Van Abbemuseum notes that that exhibition (and this one) illustrates central themes from her essay “Too Much World: Is the Internet Dead?”:

She describes a condition ‘partly created by humans but also only partly controlled by them’, in which images are coming out of our screens and travelling around – shaping human relations, rewriting social and political systems, triggering events, morphing, warping, and then dematerializing again, retreating back into the screen before invading other spaces. ‘The all-out internet condition is not an interface but an environment,’ Steyerl writes. ‘We thought it was a plumbing system, so how did this tsunami creep up in my sink?’

And speaking of sinks, I then moved on to Petzel’s “A Machinery for Living,” which riffs on Le Corbusier’s proclamation that the modern house is a “machine for living,” incorporating new technologies and mass produced and pre-fabricated materials. Interestingly, an anonymized, de-subjectivized mannequin — who happens to be sitting at Friedrich Petzel’s own desk — welcomes us into the gallery.

Curator Walead Beshty assembles the components of that “machine for living” — the technologies that compose the structures of everyday life. At the same time, the exhibition illustrates various mechanisms — means of visualization, display, illumination, ornamentation, etc. — we employ either to make familiar or to make strange these everyday objects. Barbara T. Smith’s photocopied Clocks reduces quotidian tools to their silhouettes. Photocopies appear again in Jay DeFeo’s Untitled. Harsh light and shadow make a frequent appearance, too: in Henry Wessel’s Night Walk and a gallery in which Dan Flavin’s light installation provides the only source of illumination for Josiah McElheny’s Models for an Abstract Body and a pair of Stephen Prina photographs, each titled A photograph, the principal source of illumination of which is work by Dan Flavin. And of course the cross-beams in the gallery’s skylights cast pronounced shadows on the walls and floor. 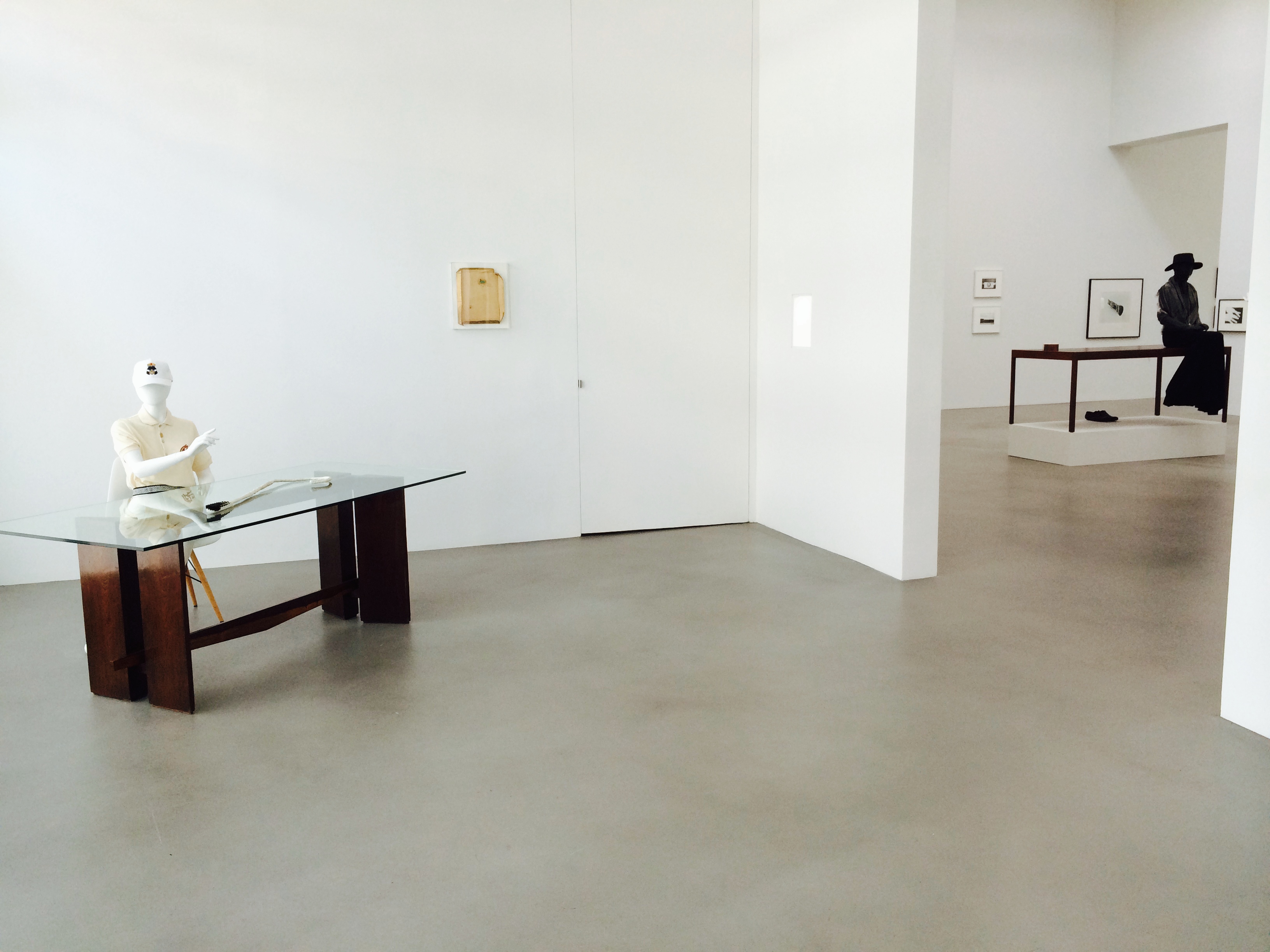 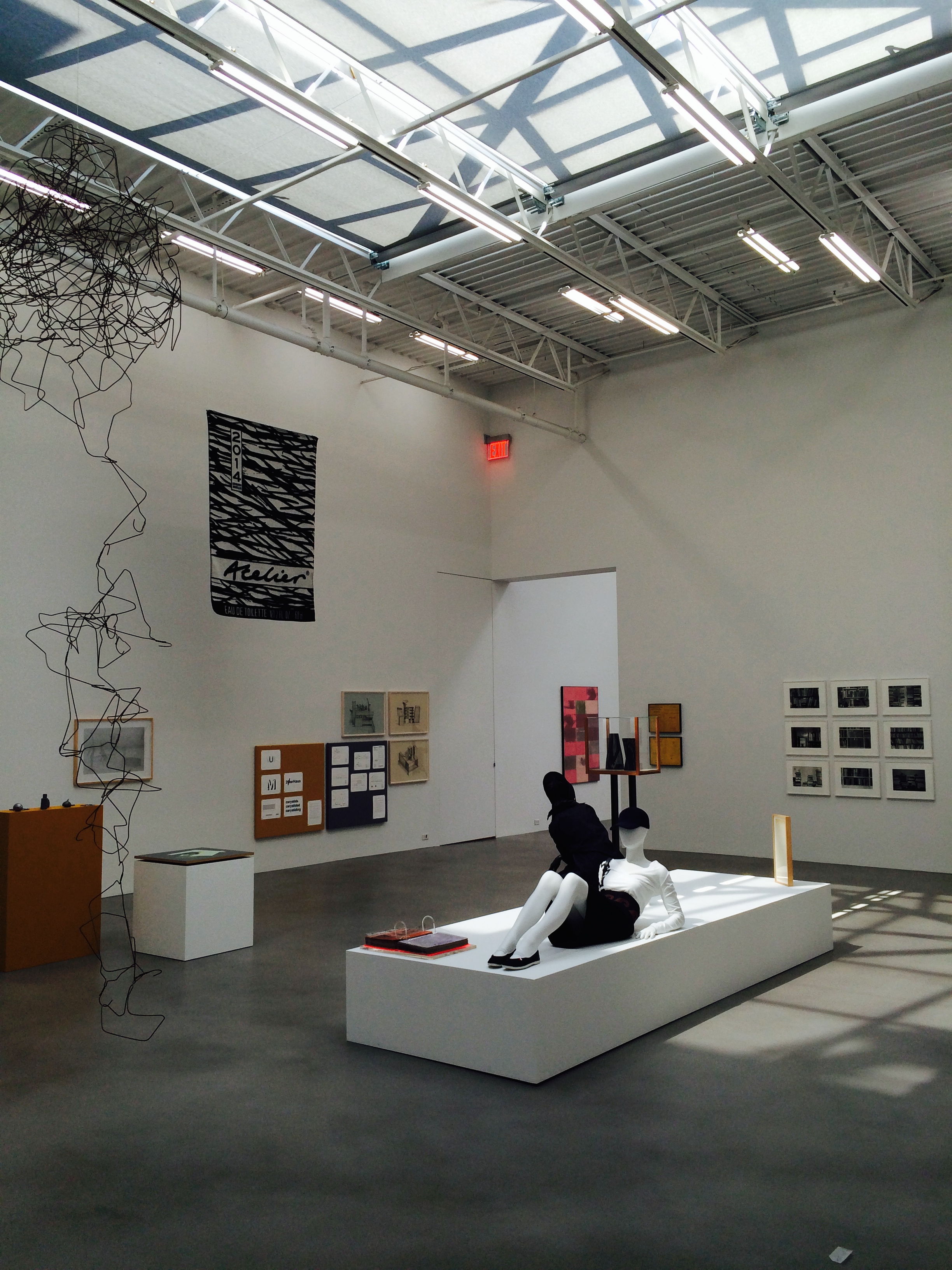 Diagrams and plans and pinboards and tableaux and documentation of arranged collections offer alternative means of mapping out a living space and the objects that occupy it.

I then moved from the “making uncanny” to the “making unnatural,” with James Cohan’s The Fifth Season, a group show that examines the disruption of “natural” seasonal rhythms. As the gallery explains it: “Ecological and technological changes have created a less defined cycle of life, one that is sped up by the velocity of communication and slowed down by unpredictable environmental behavior calling into notion our long-held notions of how time behaves,” adding a fifth season to the traditional four. There were so many compelling individual pieces in this show — Natalie Jerimijenko’s FLOWERXFACADE, an xClinicFarmacy project to inflorescence the barren urban structures; Mark Dion’s Harbingers of the Fifth Season; Pierre Huyghe’s La saison des fetes; Katie Paterson’s Future Library (certificate) — but there was just too much diversity, and I had too little time, to parse out how each pertained to the theme. On the whole, the assortment of work offered myriad means of visualizing and materializing and algorithmicizing “nature” and temporality — much in the same way that the Petzel show offered diverse means of representing (diagramming, planning, staging, outlining, highlighting) “everyday life” and the spaces in which we live it.

Of course one of the most hackneyed means of representing “nature” is via botanical imagery — which typically doesn’t do much for me beyond kitsch-level enjoyment. But I couldn’t help but be drawn in by the suffocating summery cheerfulness of Vera Neumann’s Vera Paints a Summer Bouquet at Alexander Gray Associates. 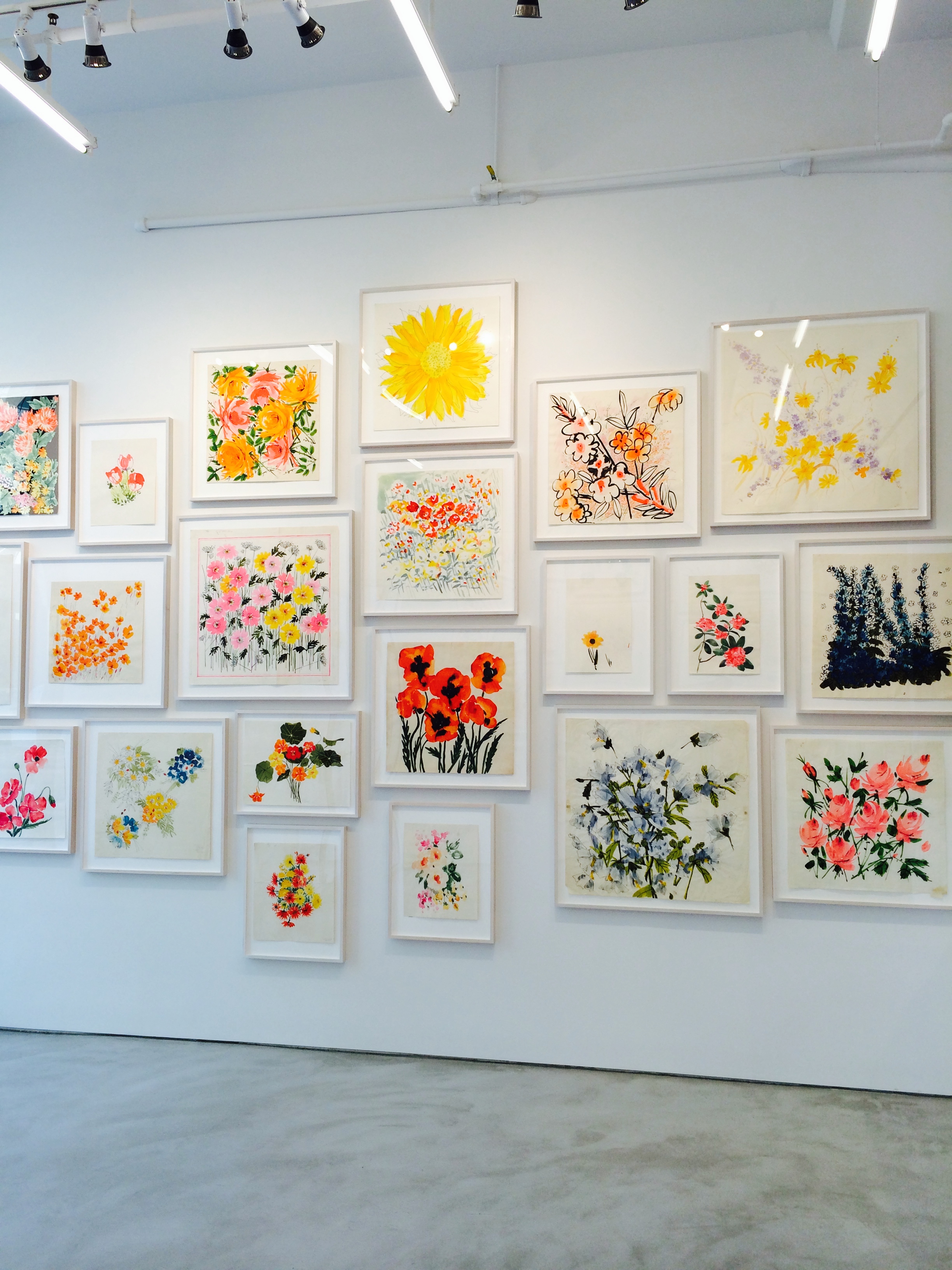 And to close: a few random shots.

First, a view from the bus window, from central PA back to New York. My childhood summers had a familiar daily rhythm: I’d wake up to clear blue skies, play outside all day until the clouds started rolling in around 3, head in for the daily 4pm thunderstorm, wait until after dinner for the clouds to clear, then head back outside into the misty pre-sunset pastels (below), and that fabulous horizontal evening light, for one last bike ride before hide-and-seek in the dark. 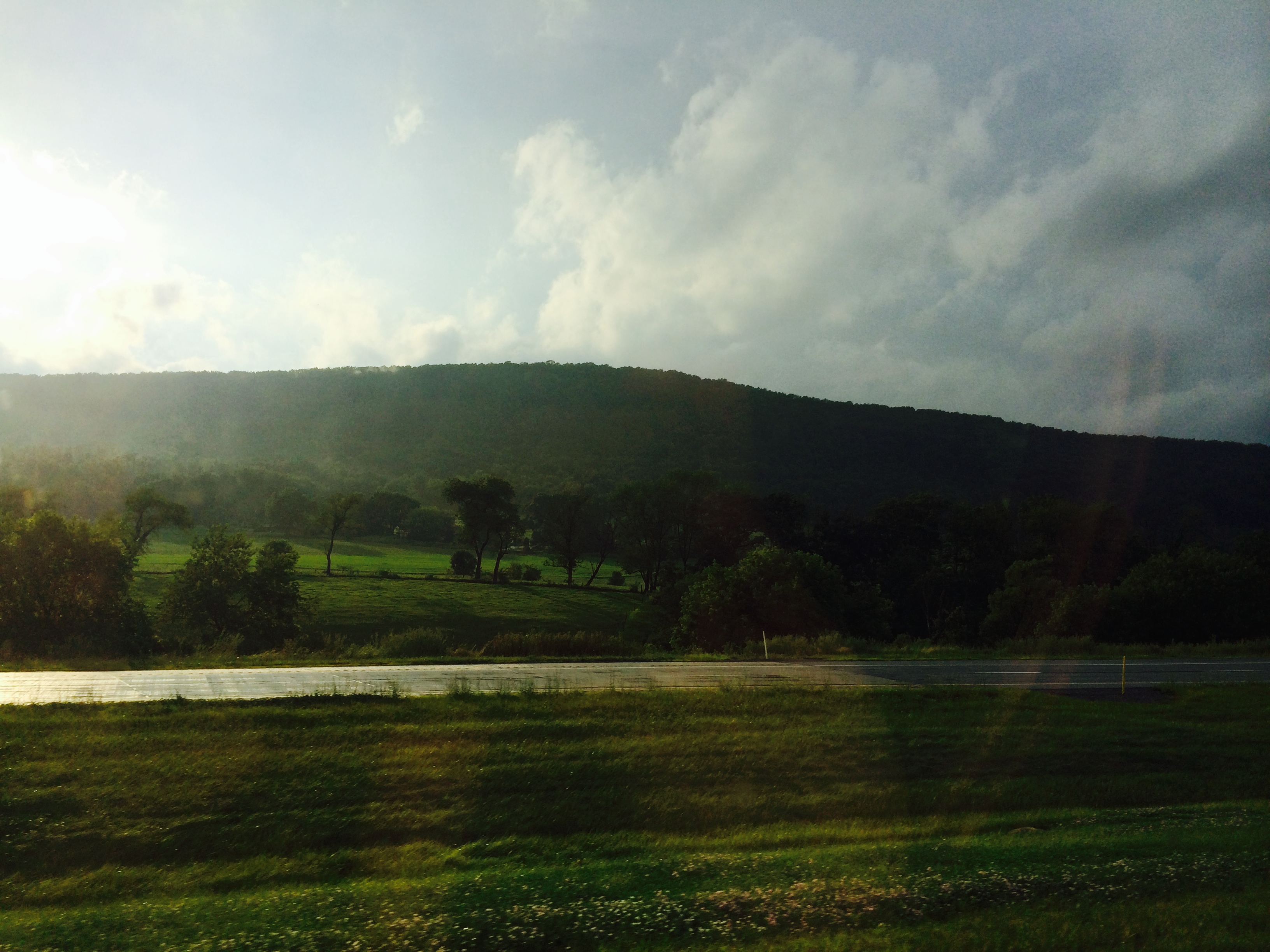 Second: an accidental partial selfie. I inexplicably like this one. 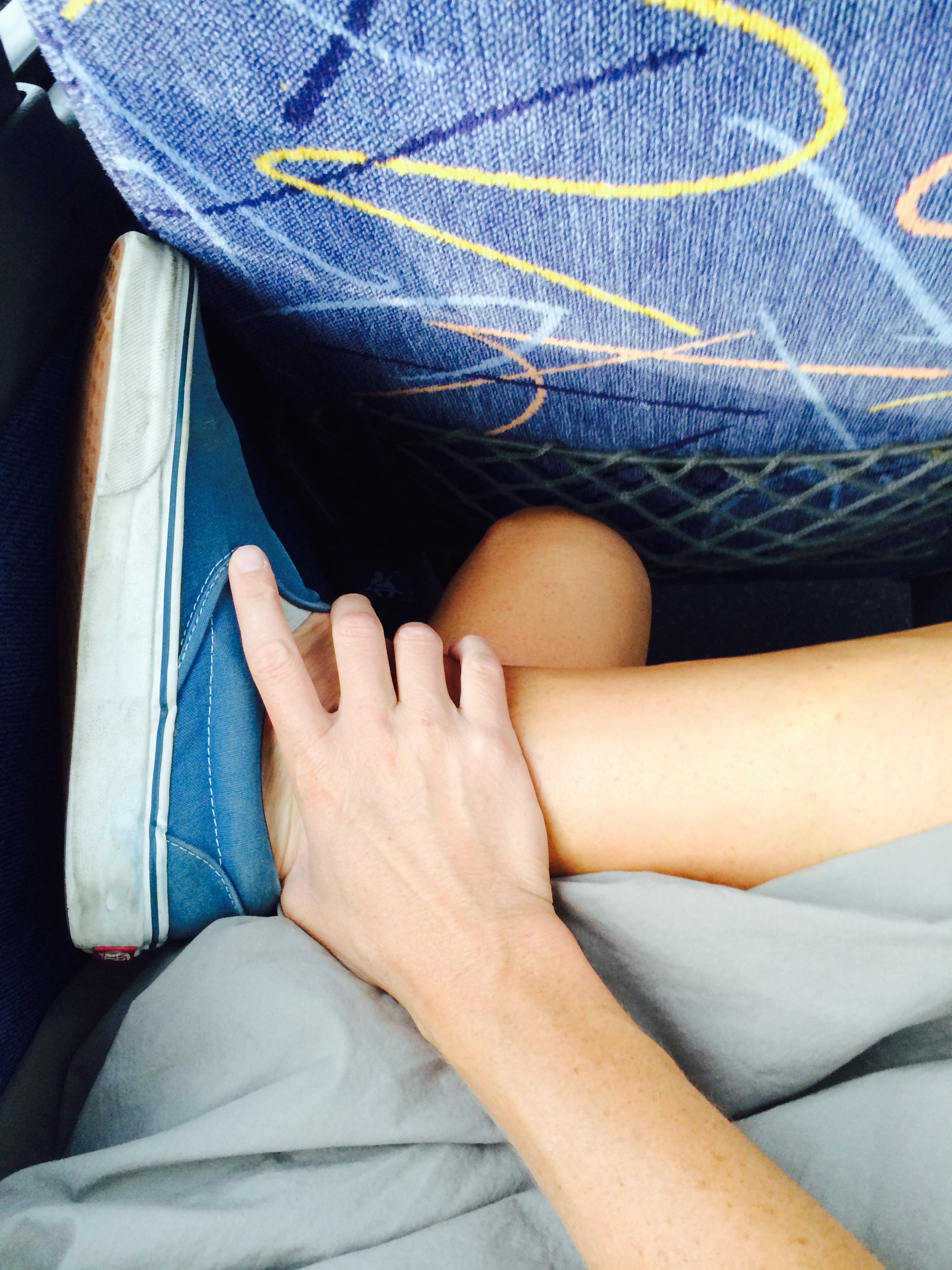 And finally, back to anonymity and subjectivization: instead of Having a Coke with You, a la Frank O’Hara, I’ll have a Coke with myself, thank you very much. 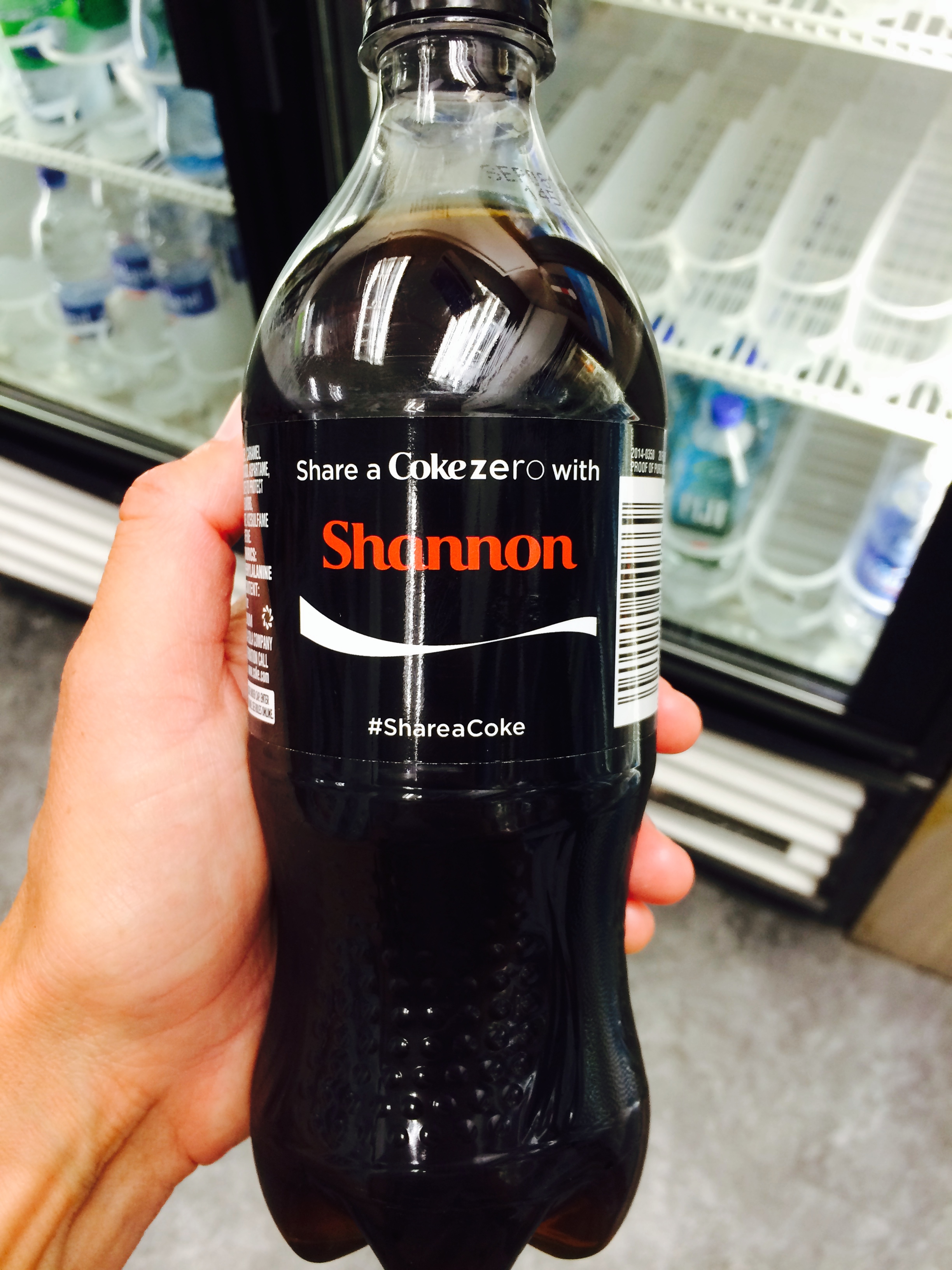