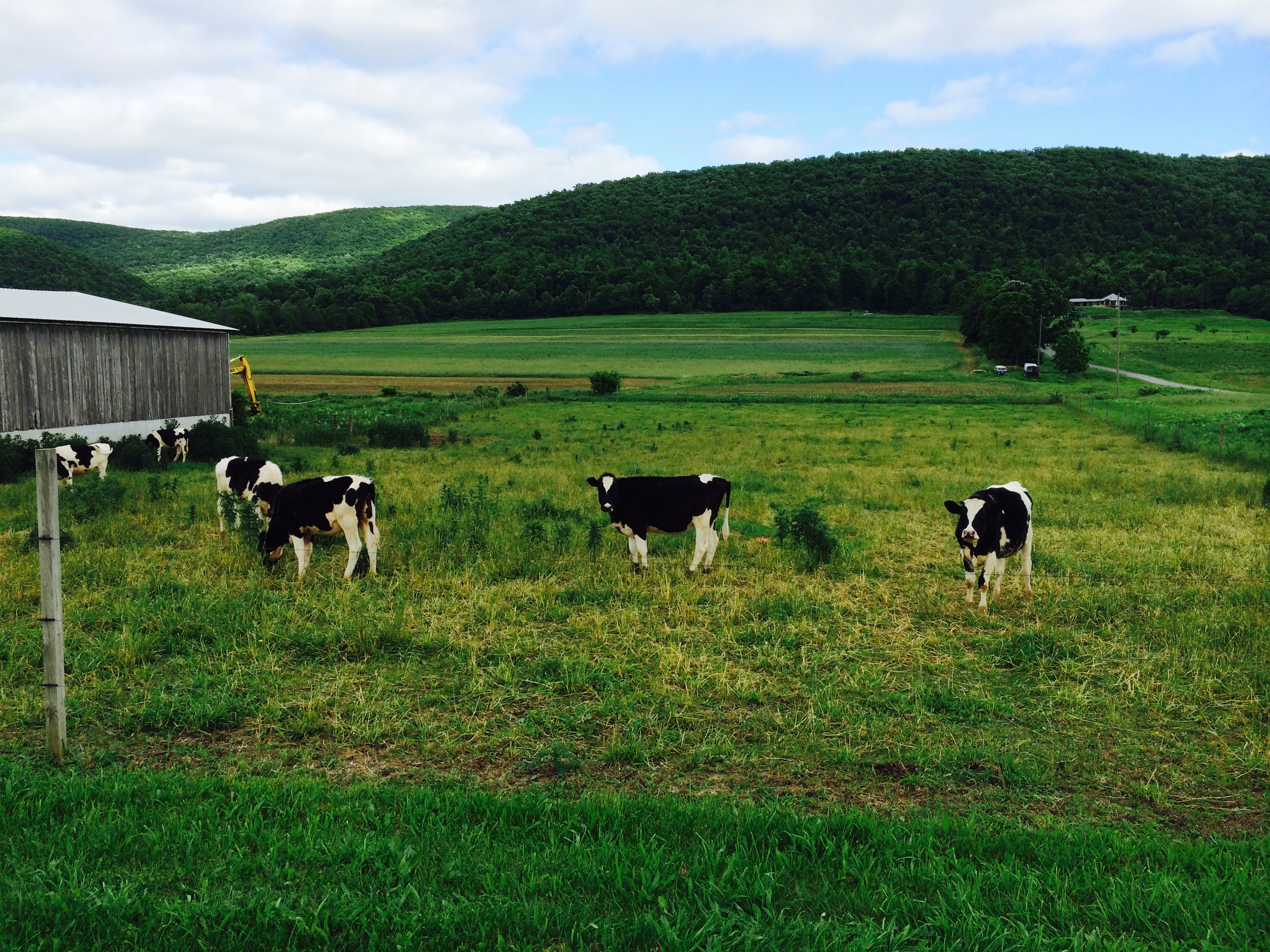 So I started off my week here, in my hometown in Central Pennsylvania. My mom was in the hospital, getting a new shoulder (the miracles of science!), so I did important things to help out — like weeding and mulching around my parents’ house, keeping up with the laundry, and regularly knolling all the items on my mom’s hospital bed stand. 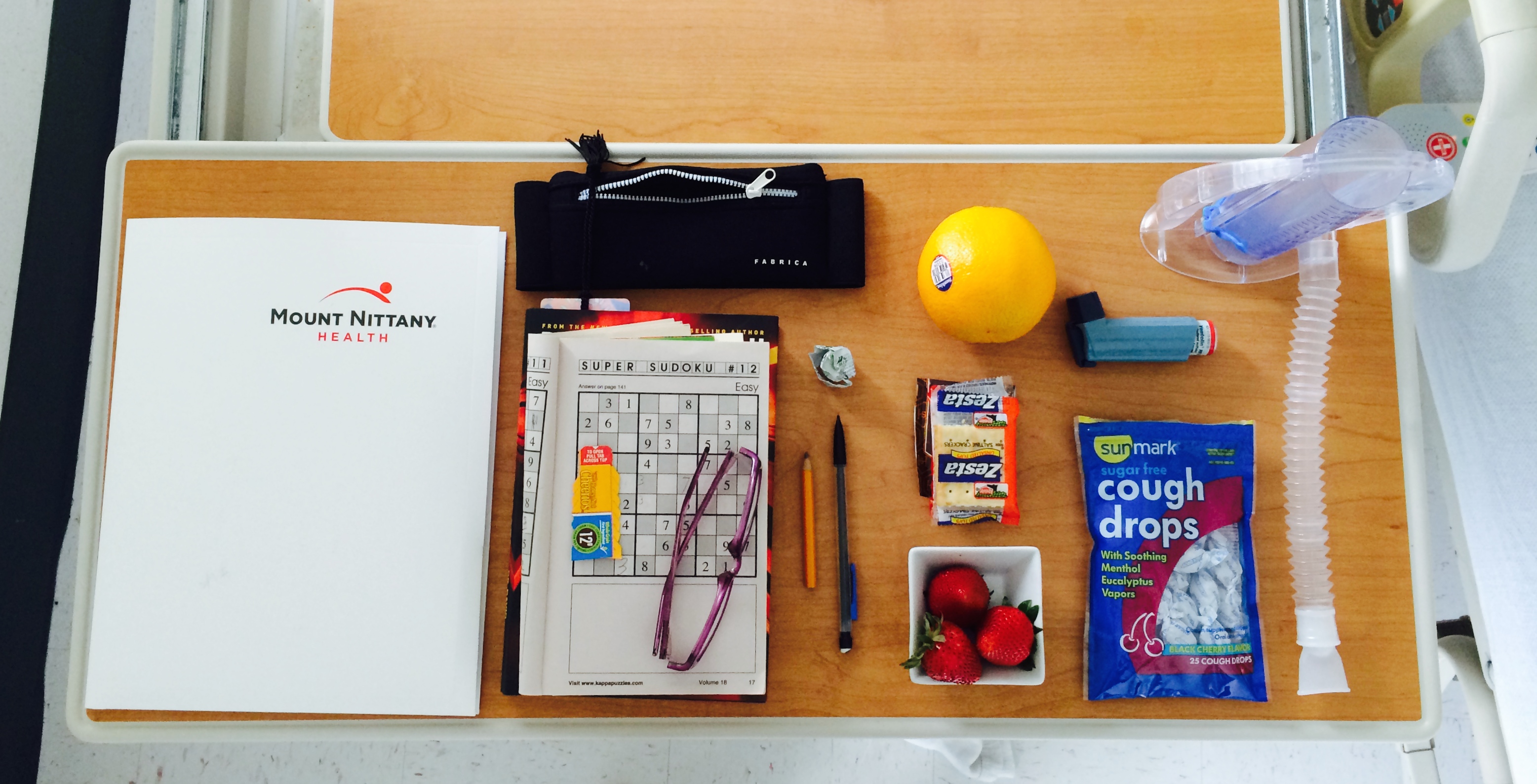 Then I returned to New York, and to a rather different aesthetic universe. I went to Metro Pictures for Louise Lawler’s “No Drones” exhibition — large-scale outline drawings of some of her iconic photos (which is kinda the analog version of machine-vision: it’s all based on abstractions and recognizable patterns) — and Tris Vonna-Michell’s “Postscript III,” a dual-slideshow-and-audio piece in which the artist tries to recount his own, and his family’s, history of Berlin. The work highlights the fallibility of memory, the mutability of mnemonic records, and slippage among the senses: words fail to capture what’s pictured in the slides; images tell contradictory stories; our different sensory registers process disparate version of historical events. I loved the whole “intimate pedagogical” set-up: two chairs, laterally side by side, facing two projected images, vertically aligned. Thus even the perspective of the listener-observer adds historiographic variation.

Then I saw Darren Bader’s Three-Shows-In-One! at Andrew Kreps: “the first show is on the walls, Photographs I Like; the second show is on the floor, To Have and to Hold; the third show is on a piece of paper at the front desk.” As with the Lawler show, which asked us to try on a different “optics,” Bader asks us to think in separate planes, or to consider how perception changes when we allow those planes to intersect. One could walk around the perimeter of the galleries, as I did, looking solely at the photos on the walls, which were selected solely because Bader “liked” them: “When I ‘like’ a photo,” he says, “I know it’s a photo, but the medium is less photo than ‘like.’ An image of a painting or a drawing I find online might be something I ‘like’ because I like the idea or the memory of that painting; I might just like the reproduction itself (72 dpi can often work some magic).”

If you walk through the galleries again with your eyes cast to the ground, you enjoy a floor-plane show consisting of found objects: stuffed baby dolls, prosthetic limbs, stacked boxes, coffee cans, an ink jet printer, a corroded car battery, shopping baskets, etc. In the exhibition “program” (or “event score”), Bader invites us to live with one of these objects and to consider where it came from. Then he asks us to acquire additional objects that are identical to it, then lose the original, then give one of the “copies” to someone and ask him/her to join us in the act of collection. As this process continues, we’re supposed to destroy a percentage of our collected objects every year (how to decide which ones?). The whole hypothetical project makes us wonder what constitutes an “original” and a “copy” in the realm of mass-produced objects; and it raises questions regarding how we assign value to objects — how much they’re worth, and whether that value derives from their perceived utility or originality, or whether or not we “like” them. Very Marx-meets-Benjamin: ritual value, exhibition value, exchange value. Bader asks: 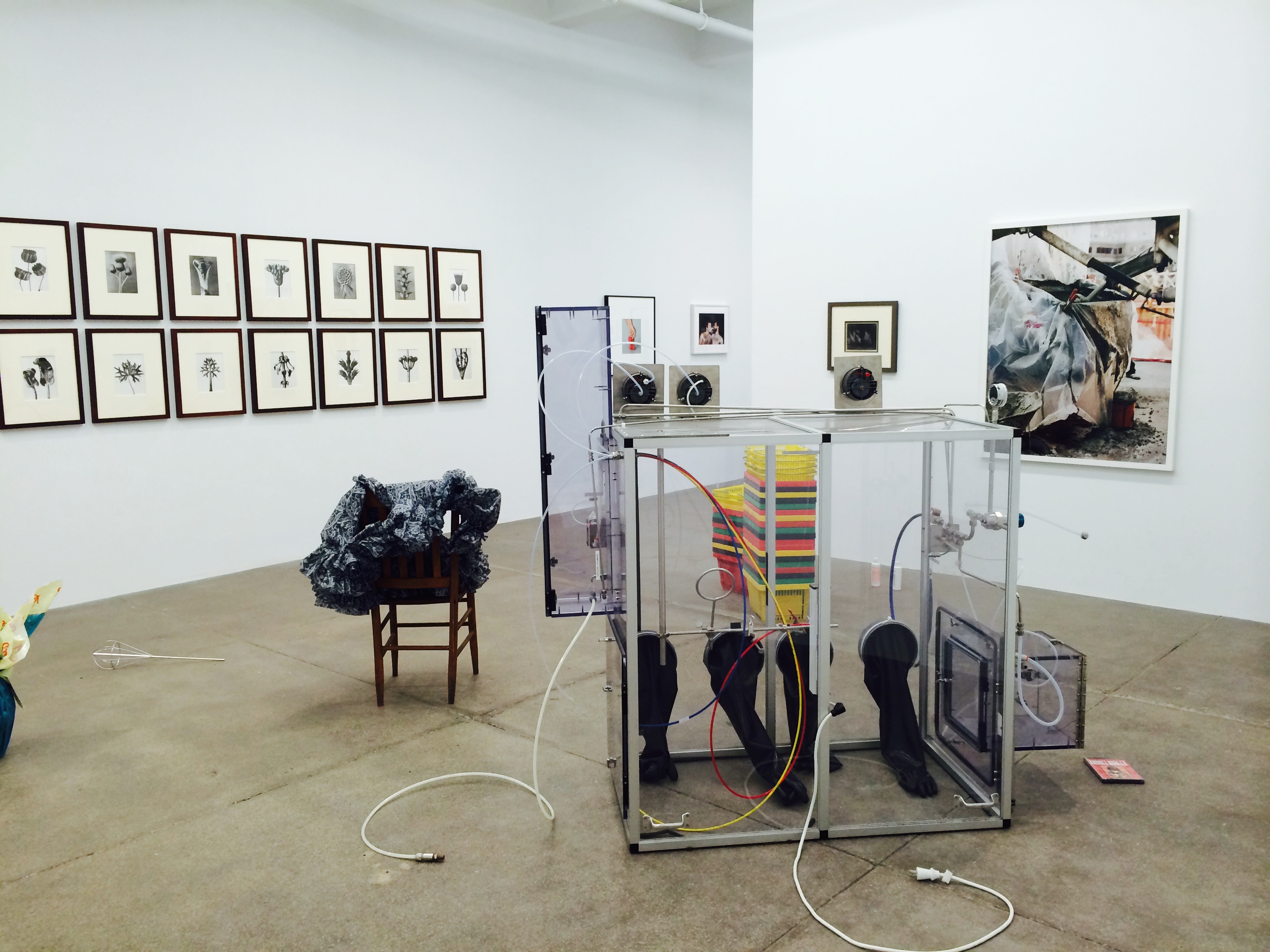 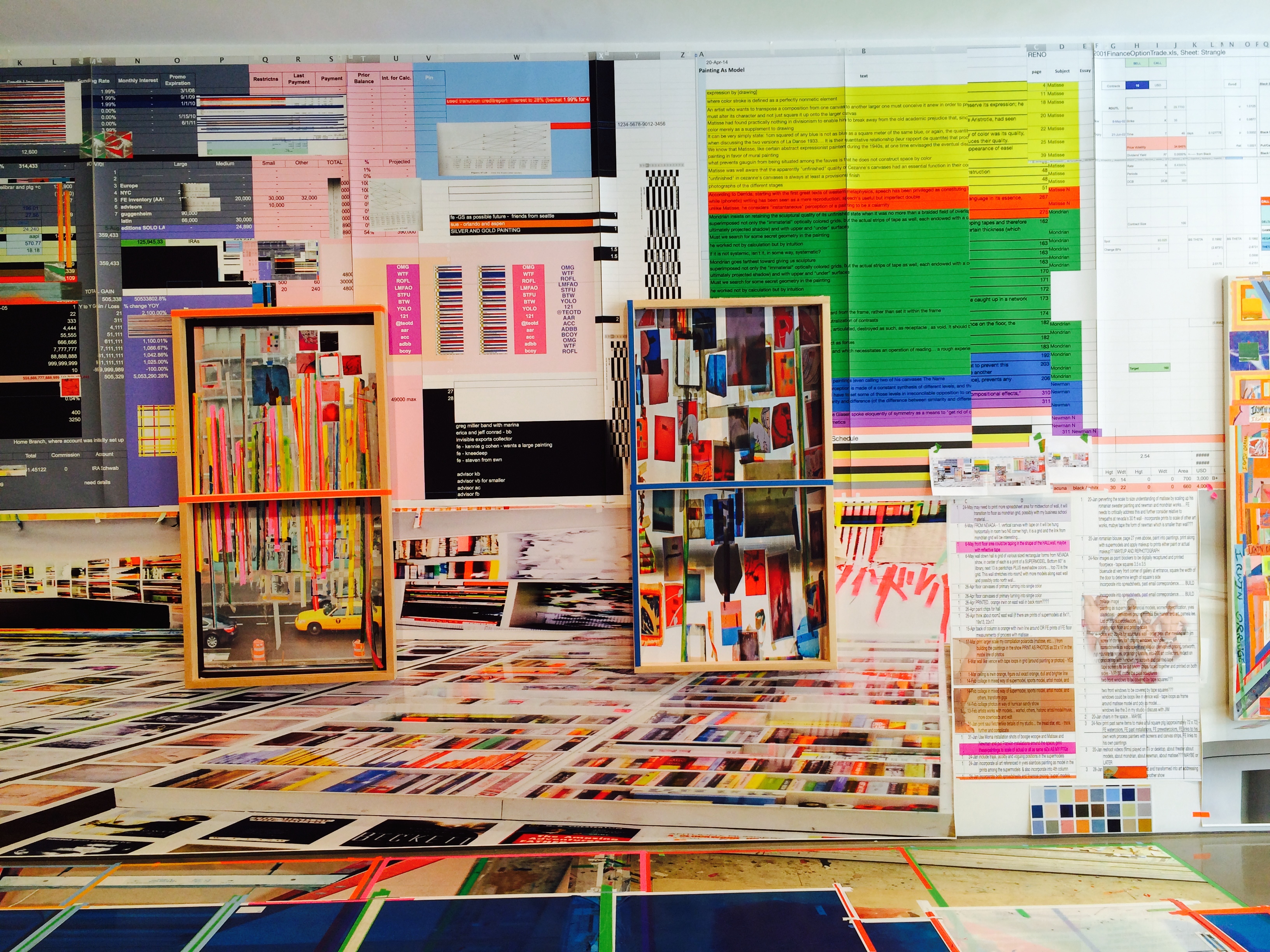 Then I caught a glimpse of Franklin Evans’s paintingassupermodel through the window of Ameringer McEnery Yohe. I found a world of intersecting planes: paintings, collages, digital prints on various materials, sculptures, floor works, etc. Form and content are all messed up here: Evans paints in the form of a spreadsheet, while evoking the aesthetics of financial models; he’s using the form of paint chips while commenting on chromaticism. He’s trying on skins and styles (often of other canonical painters — de Kooning, Pollock, Mondrian), protocols and platforms, fashions and formats. Much like a supermodel, I guess. 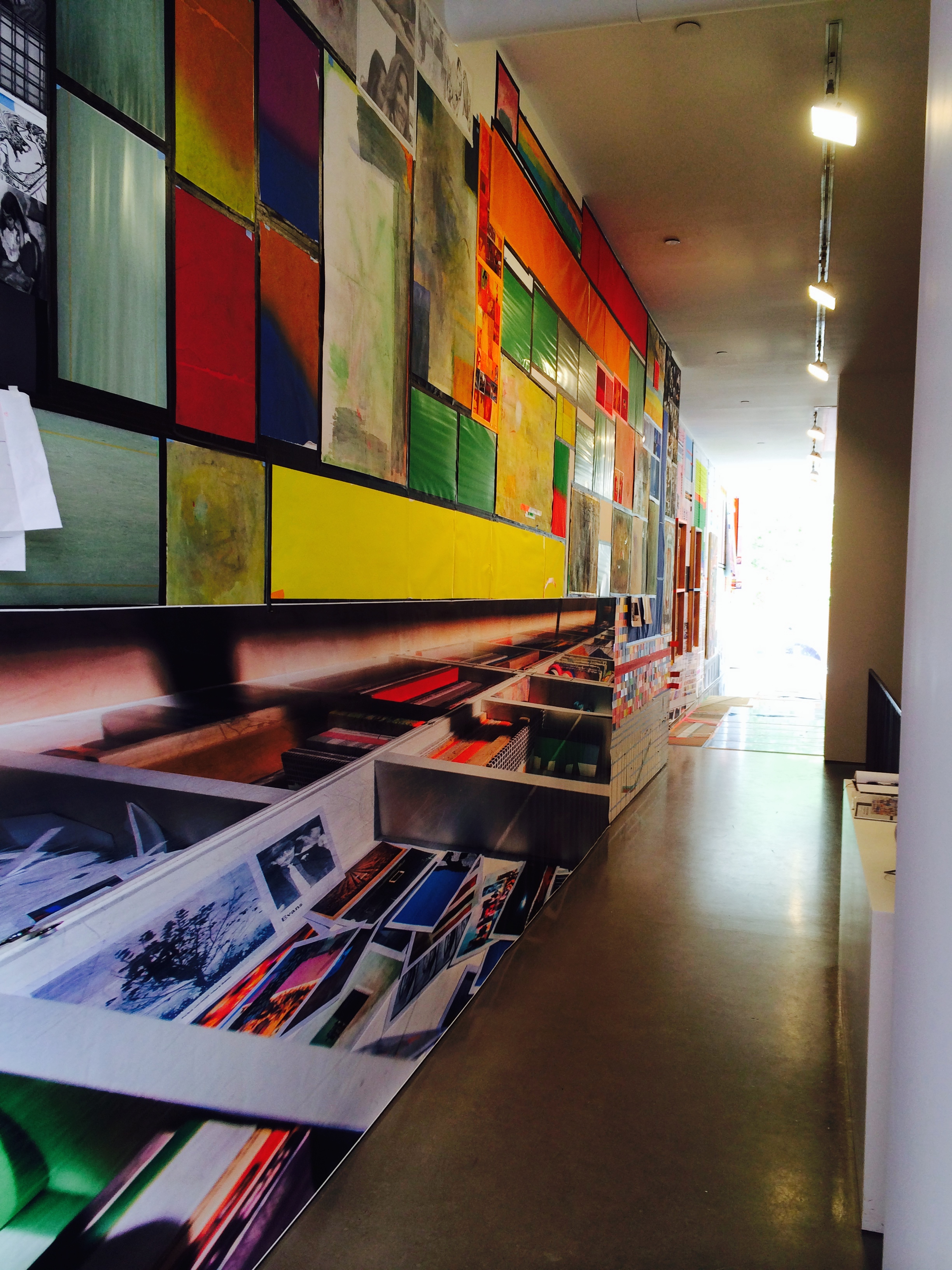 As the press release states, with obligatory prototypical pomo patois:

Evans’ practice is a network, in constant flux, in absorption of adjacent content, in defocused experience of the contemporary, in rhizomic replication, and in reference to itself.  The work occupies the field of painting/installation with studio process and sit as its subject.  His work flips between digital and material, process and object, thought and action, and the present and memory.  Evans uses art history (often painting history) as a significant input to his practice, and investigations of specific artists become content and media within his unfolding worlds.

I actually noted quite a few parallels to Camille Henrot’s Gross Fatigue (which I saw and wrote about last month): both are formal and chromatic explosions that cycle through various modes of representation and conceptual architectures. Evans’s overall “effect” — the sheer cacophony, the windows-within-windows-within-windows effect — is what some might regard as a post-internet aesthetic, which I’ve been thinking about again lately, since hearing Christiane Paul’s and Tyler Coburn’s really cogent critiques of the concept at the Frieze art fair. In Evans’s work this supposedly born-digital aesthetic is rendered in various analog forms. And it alludes to, as does Henrot’s work, the long history of experimentation with modes of visualization and the aesthetics of classification. We see plenty of precursors going all the way back to early modern cultural productions — books, paintings, architecture. The Internet may have ratcheted up our interest in these concepts and styles of representation, but the general ideas underlying this work — and even the visual architectures, like windows and panes and tables, we use to represent those concepts — have quite a long history.

The next day I stopped by Team to see Brice Dellsperger’s Body Double. His send-up of Postcards from the Edge, which was showing on the big screen in the Grand Street gallery when I visited, was pretty hysterical.

While in the neighborhood, I also saw Artists Space’s recreation of Manfred Kuttner, Konrad Lueg, Sigmar Polke, and Gerhard Richter’s 1963 Living with Pop — A Demonstration for Capitalist Realism, and the various related activities that took place over the following decade. Next: Nicholas Buffon’s cutesy-crafty (and charming) models at Callicoon and Keil Borman’s (loud, if not terribly exciting) integration of sound, sculpture, and painting in at Klemens Gasser & Tanja Grunert.

And finally: Jason Loebs’s Cold Flow Creep at Essex Street — a show that makes thermodynamics visual and tactile.  I loved Loebs’s contribution to the Descartes’ Daughter show at the Swiss Institute last year. Here he’s working with similar materials: elemental materials, minerals, that are fundamental to the technologies and systems we use to store and transmit information and verify value. He’s created paintings from thermal grease, which, as the gallery puts it, is “commonly used to transfer energy from a heat source (high power LED lights, CPUs, graphics cards) to a heat sink. Thermal grease is designed to aid the distribution of excess heat.” On the tables are lumps of mineral ore we find in microprocessors; he’s coated these rocks with color-shifting ink, which is commonly used on currency to prevent forgery or tampering. We’re confronted here — as we were in Bader’s show — with materials that represent different forms of valuation: how do we protect the value of a dollar? what’s the value of the components in our thousand-dollar laptops? what’s information worth?

And what’s the role of heat- and carbon-producing entities within these economies? How does the organic translate into the digital, the informational, the financial? And what do we do with all the excess heat generated in those chemical, and symbolic, processes? Maybe we’re better able to wrap our heads around the human role, and the geologic foundation, of our information economy, when that organic presence is made empirical, phenomenological in some way — here, via heat and implied tactility. Or, as the press release states, “The exhibition consolidates a series of objects and gestures that mine earthen matter to bring forward nature’s imprint upon our reigning digital economy.” Yeah, that’s it. 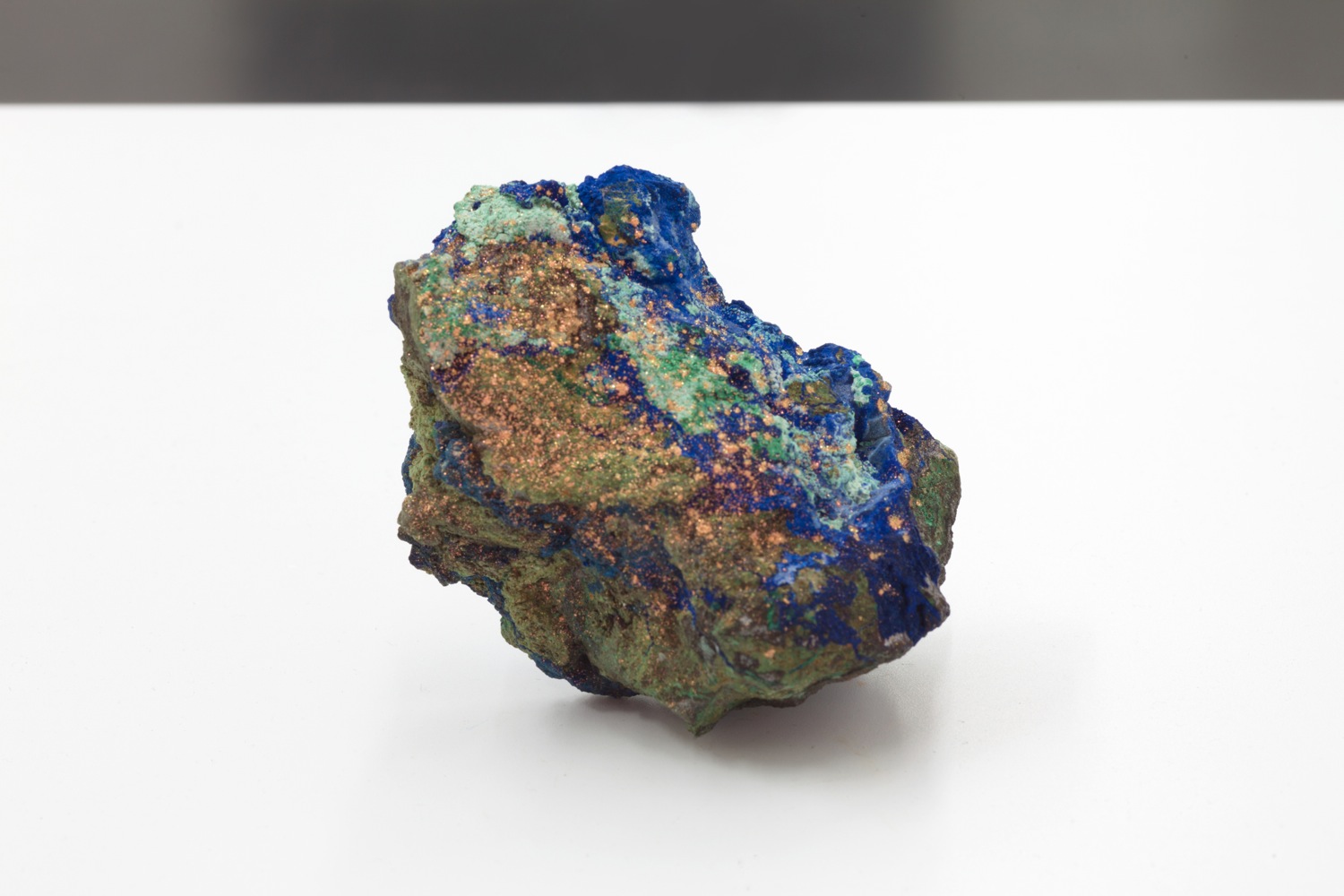