I went to a couple exhibitions every weekend over the past several weeks — which adds up to a crapload of art over the past month. I actually feel a little guilty — as in, how on earth did I find time to do all this?!? So, as penance, I’ll reflect on what I’ve done:

I saw the Sigmar Polke, John Cage 4’33”, and Frank Lloyd Wright shows at MoMA. I think Holland Cotter’s April 17 review of the Polke show was some of the most refreshing and poetic and grounded art criticism I’ve read in a long while, and I found that his words rang true for me when I was standing in the galleries:

[Polke’s] work can be daintily detailed and virtuosic, but it can also look polish-aversive and incomplete. Sometimes he seems to start a painting or a drawing, then stop, as if to say: You get the idea….

I did sense, as I was walking through gallery after gallery, that this was polysyndeton (look it up!) spatialized. And this, then this, plus this — and then for something totally new, this! I have to admit that very few individual pieces grabbed me. It was more the aggregate that impressed: the idea that all this — all the multiformity and kaleidoscopic jumble — sprang from one man’s brain. That’s impressive. Speaking of impressive: check out the names on this program for the August 29, 1952 performance of Cage’s 4’33” (and other works): Christian Wolff, Morton Feldman, Pierre Boulez, Henry Cowell!

Then I stupidly did a couple of the art fairs. I always hate them — undoubtedly in part because I always feel like the scruffiest, dorkiest, poorest kid in the (cavernous) room — but I went to Frieze and NADA. At Frieze, I liked Rita Sobral Campos’s If-Carl-Andre-Were-A-Constructivist stuff; Shannon Ebner’s language-meets-photography work (I’ve always liked her); Nicolas Robbio’s materializing-the-network-diagram wall sculpture; Rirkirt Tiravanija’s tightly packed chalkboard paintings; Spencer Finch’s colorful grid paintings; Sarah Sze’s tabletop bonsai sculptures; Tim Rollins’ & KOS’s massive “On the Origin of the Species” rhizome painting; Johanna Calle’s microscript diagram-scores; and — probably my favorite of all — Ciprian Muresan’s “Agnes Martin,” both because it’s beautiful, and because, hey, it’s about Agnes Martin. 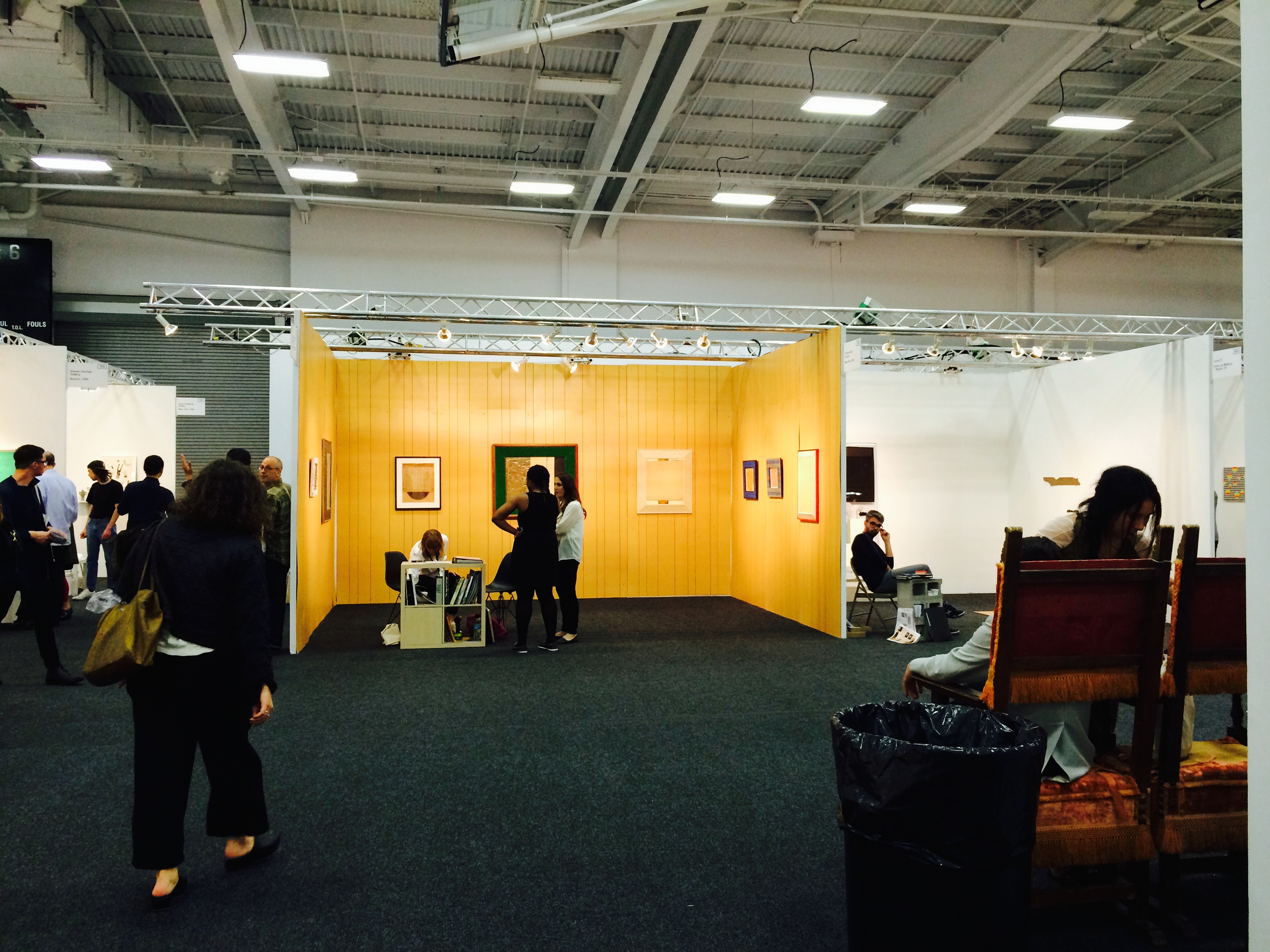 I’ve come to realize that I like tricked-out booths, like Churner & Churner’s wood-paneled-booth-meets-basement-rec-room at NADA, which created a perfect ambiance for the Jaime Davidovich paintings they were showing.  And I like it when galleries write the artists’ names directly on the wall, rather than using wall labels; I appreciate seeing that imperfect script and realizing, hey — there are still people behind these big corporate aesthetic machines!

I realize this post was more of a channel-surf than usual. That’s because none of these shows were meant for contemplation. It’s all about volume — and, and, and, and… While Polke employed polysyndeton to provocative grammatical and historiographic effect, the fairs’ agglomeration simply wears you down. It’s all but impossible to appreciate individual works (although I did, obviously, make note of a few stand-outs), because they all smear together. It’s like OKCupid for art. It’s all forest; no trees. And while the sheer scale of these operations is a statement in itself, regarding the political economy of art and the nature of artistic production, the bigness — and the mode of engagement it necessitates — strips away everything I love. Which is why I typically leave these sorts of events totally depressed — barely remembering anything I’ve seen, annoyed by how derivative so much of that work is (more crappy ceramics?!? more neon paintings?!?), and annoyed by how derivative so many people are.

Wow — I’m a total bummer. I think I’ll break here and designate this the Downer Post. In my next post, I’ll talk about all the other stuff I’ve seen in recent weeks — stuff that I can appreciate under different conditions — conditions that actually allow for observation from different angles and distances, that encourage staring, that give space and time for real engagement.