Next weekend I’ll be participating in a symposium honoring architect Lebbeus Woods, who passed away on the night of Hurricane Sandy in 2012. “Lebbeus Woods: A Celebration,” which takes place at the Cooper Union, begins Friday April 25 at 6:30 pm, and continues through 5pm on Saturday April 26.

I’m on the “Politics” panel on Saturday afternoon, with Carin Kuoni, Sanford Kwinter, and Neil Spiller; David Gersten’s moderating. We’ve been asked to prepare our five- to seven-minute remarks in advance. I finished my presentation yesterday, so I figured I’d share it here:

I met Lebbeus several years ago through his gracious and brilliant wife Aleksandra, my colleague at The New School. I remember being nervous about meeting this giant of a man – “giant” in many senses of the word – but was ultimately reassured by his gentle handshake, the mollifying texture of his voice, and his genuine interest in what interested me – little old me.

A year or so later, in 2009, I served as a guest critic for a studio that he and Christoph Kumpusch were offering as part of Cornell’s intensive summer program. The “Common Ground” studio directed its students’ attention to the “surface of streets, sidewalks, parks, plazas and other (even informal) public spaces, comprising the ground-plane we share with others we do not personally know” – a plane “inscribed with evidence of people’s movement, activities, and intentions, but also the accidental events, the unintentional and the unpredicted.” The studio was premised on the assumption that we can potentially learn more about urban life from those cracks we step over, that noise we listen through, those smudges we look past, than from official plans and policies. 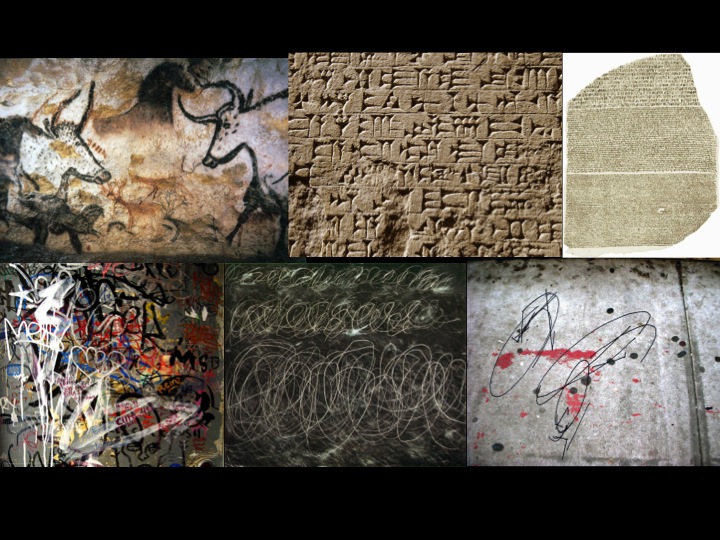 In his introductory lecture Lebbeus examined the longue durée of mark-making – from cave paintings and cuneiform through the spiritualists’ fascination with automatic writing, Dada’s exquisite corpse, and Cy Twombly’s seemingly improvised scripts, and ending where the studio would begin: with the palimpsests of intentional and accidental markings on our urban facades and sidewalks. Over the course of two weeks, Lebbeus and Christoph urged their students to read, rather than read past, the small and the quotidian. They collaboratively developed a politics of small things.

I, and perhaps you, have traditionally associated Lebbeus Woods with big, aberrant ideas  – proposing bold architectural interventions into war-torn territories, imagining tombs that traverse the galaxy on beams of light, grappling with forces of nature and laws of physics, envisioning buildings that not even Arup could render structurally sound. These are not small visions. Yet having license to be so bold might be the reward for humility. For all his big thinking, he also saw the power of the small mark, the subtle gesture, the nuanced articulation – and the hidden potential.

“Common Ground” echoed themes from Lebbeus’s earlier work. As he wrote in 1992, in regard to his Berlin Free-Zones project,

I am much more interested in the secret life of the city, those things which can maybe happen out of sight or in a kind of unseen way, strange things…that are unexplainable, even unjustifiable in terms of any sort of convention of society or certainly of architecture. I decided to bring to the city some…spaces that didn’t exist already…. [S]o I just simply began by introducing a kind of tectonic manifestation, a kind of form that was not quite yet architecture, not something inhabitable…. I began to call these freespace structures[,…] free of any kind of predetermined meaning or usefulness.

The Berlin Free-Zones, he wrote in Radical Reconstruction (1997), were imagined as a hidden city of interior spaces linked by communication technologies, which bound a community through the “vagaries of dialogue” (p. 26). These freespaces acquired meaning and usefulness as they transformed into spaces for communication.

Woods practiced architecture as if it were such a space for multiform communication. The current show at the Drawing Center, “Lebbeus Woods, Architect” (emphasis added), presents the sketch, the formal drawing, and the model as equal manifestations of architectural practice – in his case, a practice in which small marks and folds, intricate parts, and subtle annotations add up to big, potent ideas. 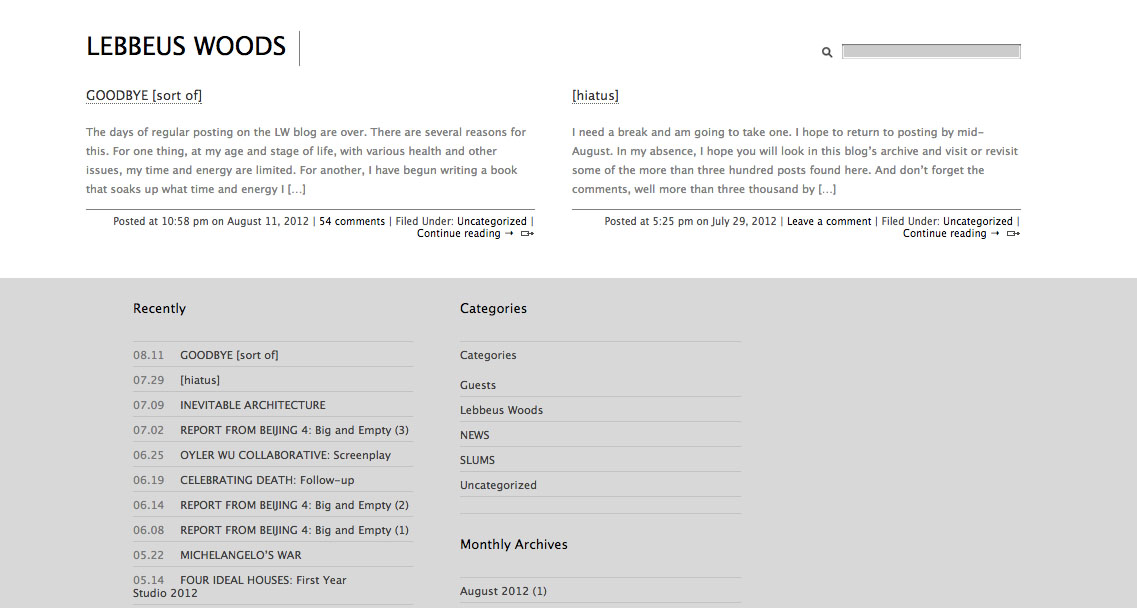 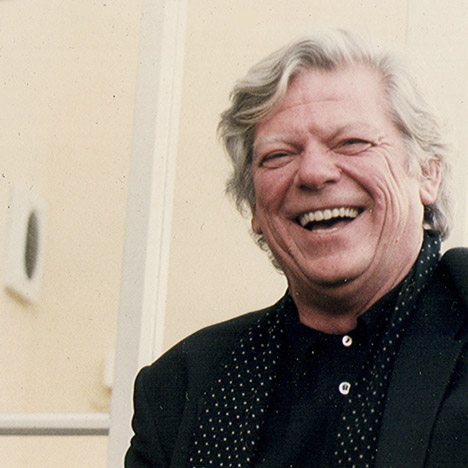 Later in his career, as he sought to free himself from the “tyranny of the object” and shifted his focus from “from objects to fields,” Woods added another practice – another field, or “freezone,” of architectural mediation – to his repertoire. The fall of 2007 brought us Lebbeus’s blog. The previous summer he had participated in an architecture blogging conference, “Postopolis!,” at Storefront for Art and Architecture, and the organizers of that event contend that it inspired Lebbeus to explore this new medium. His blog’s minimalist theme – the Hemingway – and small, sans serif typeface are unassuming on their face. And Lebbeus’s blogging voice, which is much less prone to manifesto-like proclamations than in his earlier writing, is generous and elegantly conversational and marked by sage humility. The writing, much like the forms of mark-making addressed in that Cornell studio, strikes a balance between the intentional and accidental. Thus is the nature of blogging: it’s both planned and automatic; it’s a “freezone” web architecture that takes on purpose as it’s inhabited and actualized. 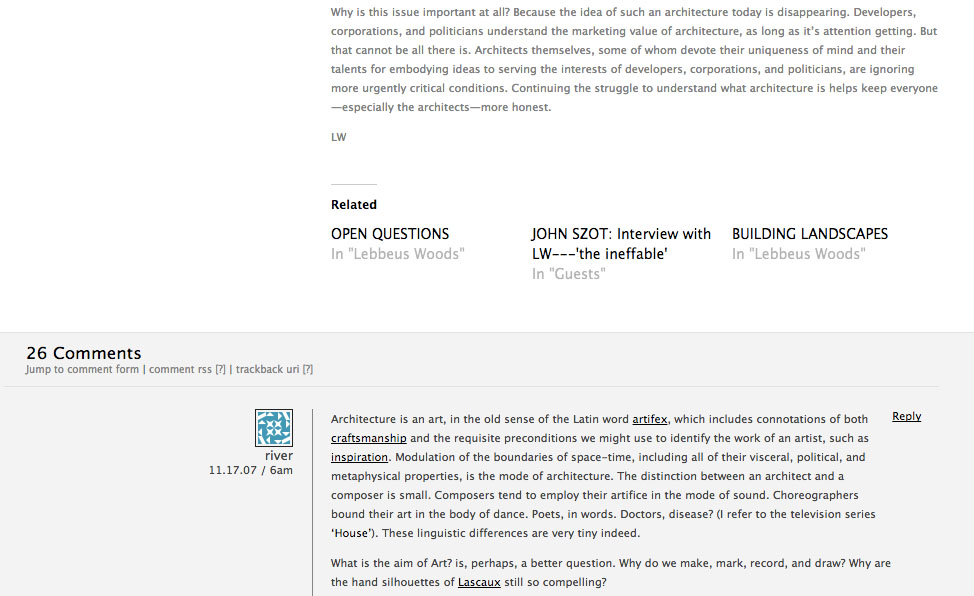 This space of subtle aesthetics and small marks was, since its inception, actualized into a zone of vibrant debate. Lebbeus’s posts often drew dozens of thoughtful comments and inspired follow-up conversations in other forums. It was a small space for big political discussions of both big and small things. The blog itself thus constituted a “common ground” for architectural discourse. It’s fitting, then, that the blog resides at wordpress.com. WordPress is an open-source blogging platform and content management system that users can either download and install on their own servers, or allow WordPress to host on their behalves. Lebbeus chose the latter – probably not intentionally, in an attempt to make a political statement about hegemonic discourse, but rather more likely because of a lack of technical expertise. Yet the accidental result of this unintentional choice is that lebbeuswoods.wordpresss.com lives out there on common ground, in freespace – echoing big ideas through small type; riding on a beam of light, in perpetuity, for all the world to read. 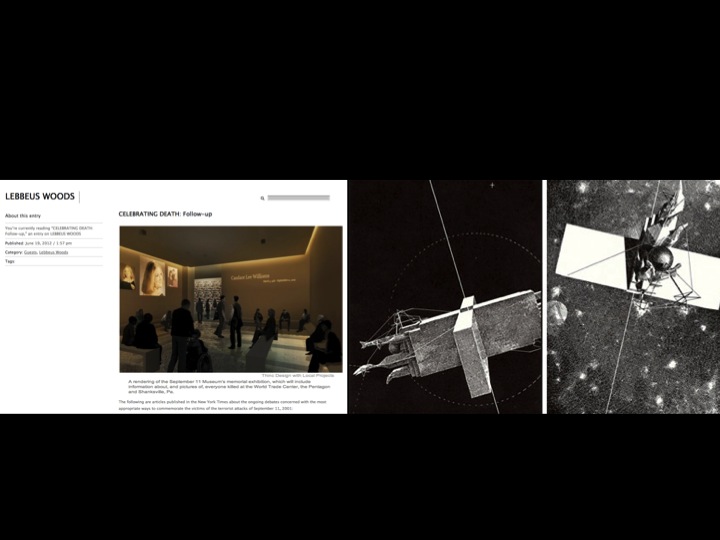