I keep a list on my iPhone of all the current and upcoming exhibitions I want to see. I learn about some of these shows through ads in Artforum or other art magazines, through reviews in the Times or the New Yorker or other periodicals, through blogs, through friends, etc. Sometimes I’m familiar with the artists; sometimes I’m not. Sometimes it’s a photo of the work that piques my interest, sometimes it’s a review or a description in a press release, sometimes it’s the reputation of the gallery, and sometimes it’s merely the exhibition title. More often than not, I don’t know what I’m in for. I’d say my gallery itineraries are 30% predictable; 70% crapshoot.

I consider myself lucky that yesterday’s Chelsea excursion yielded at least a 75% hit rate. Really good stuff. And I’m a little freaked out by the striking similarities between the 15 shows I saw. Of course I gravitate toward any art grappling with language and text and the “aesthetics of administration” and “institutional critique” — but I really can’t explain how nearly every piece I saw yesterday hit all those buttons. Totally weird, and totally awesome.

I started with Emily Jacir’s Intervals at Alexander & Bonin. I was (not surprisingly) particularly taken by her ex libris series, which was commissioned for documenta 13. It consists of photos, taken by Jacir in the Jewish National and University Library, of books confiscated by Israeli authorities in 1948 from Palestinian homes, libraries, and other institutions.

I found a parallel a little later that afternoon, in Simon Evans’s Edible Landscape at James Cohan. I saw his Shitty Heaven show at the gallery back in 2011, loved it, and wrote a little about it (I regret missing his Island Time show back in 2009). For me, his works’s a bit Mark Lombardi-meets-Mark-Dion-meets-Robert-Walser. In this particular show, a few pieces resonated strongly with Jacir’s work — especially her focus on reclaiming and recontextualization; Evans created four large collages of ephemera gathered from New York’s streets, combined with his own notes. 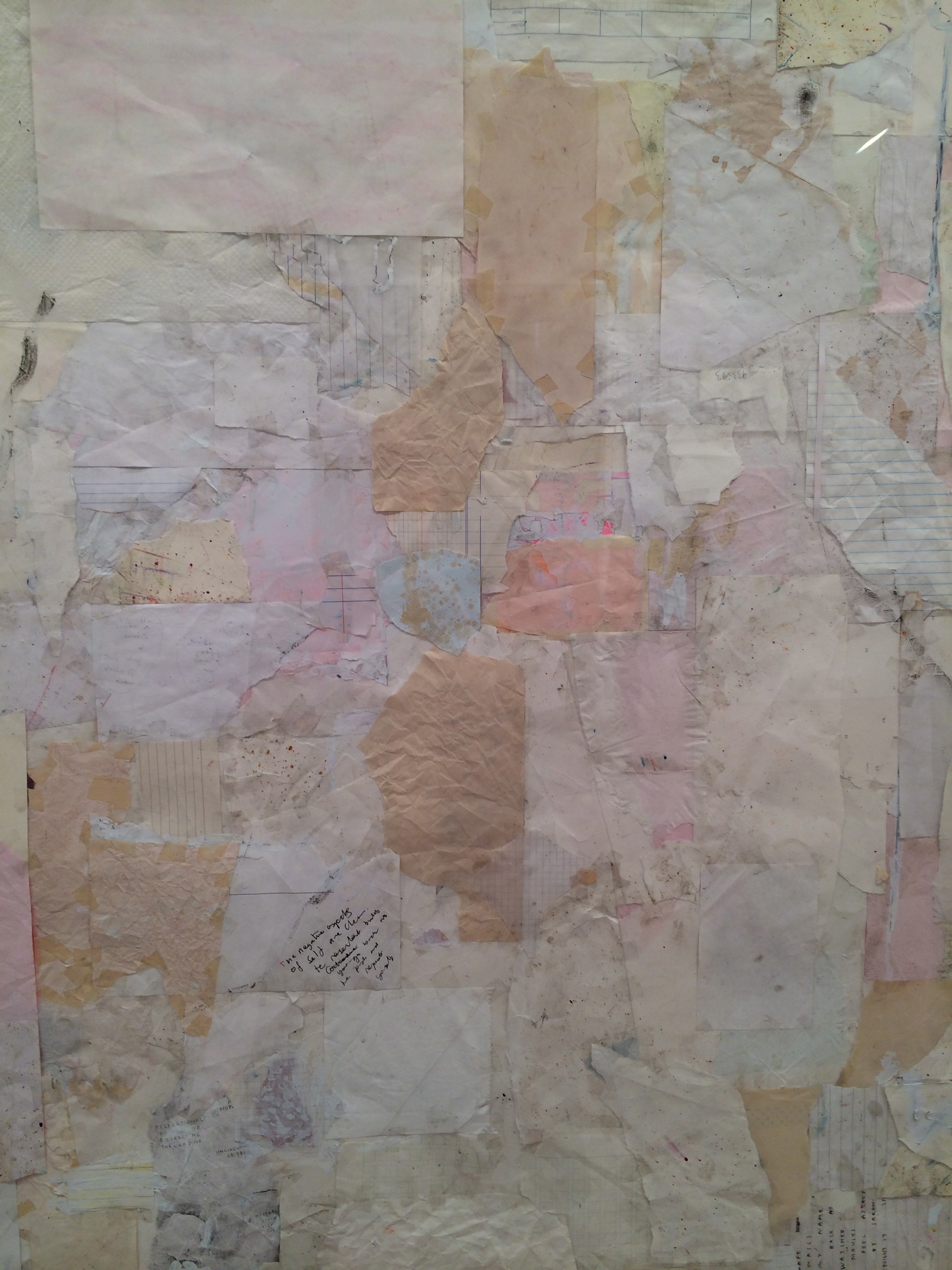 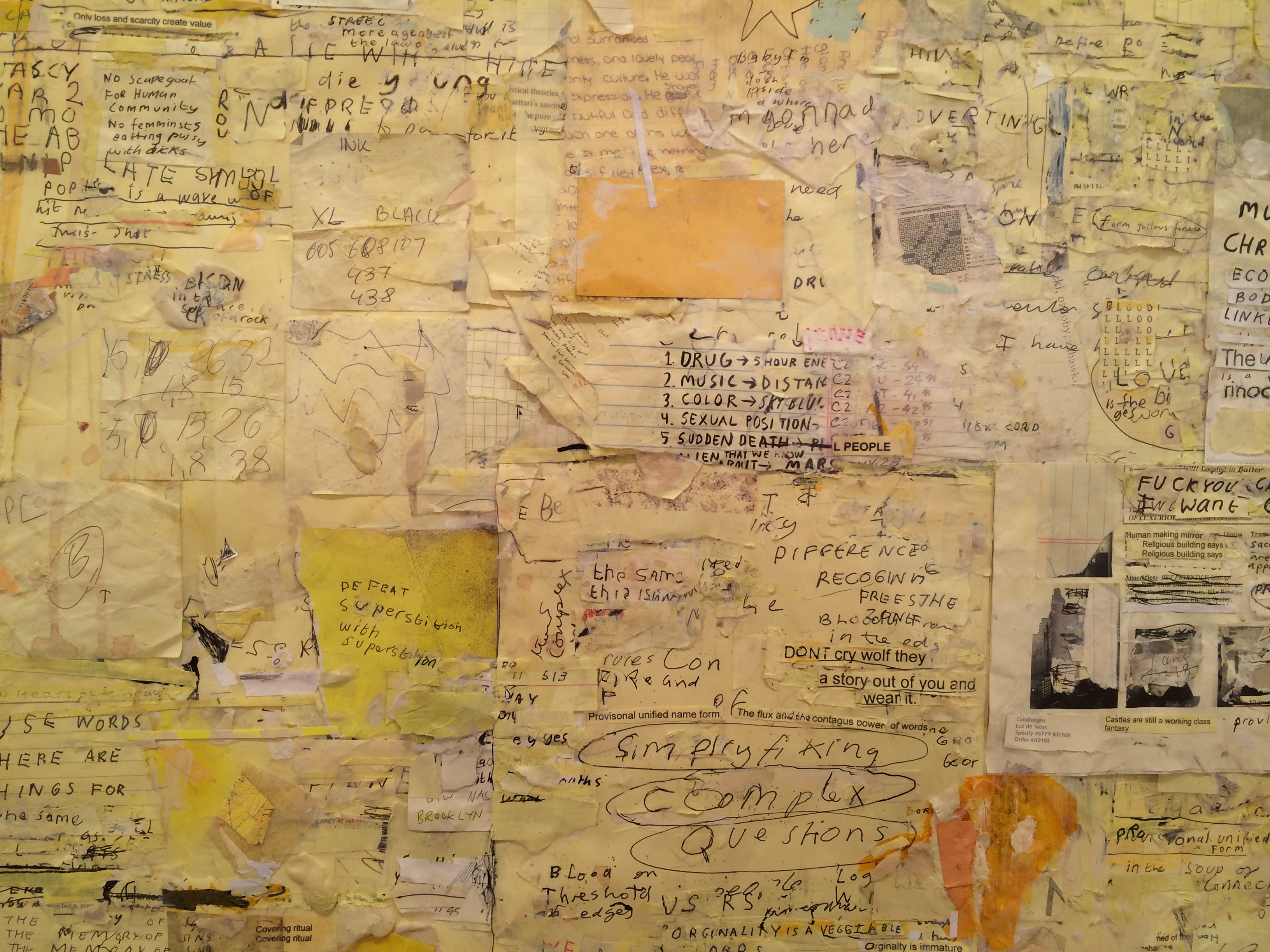 His maps, which are very Where’s Waldo On Adderall, screw around with registers and ontologies and scales — shifting within the same plane from cosmic forces to internal (occasionally psychotic) dialogue. And his experimentation with cartographic forms — e.g., the dysfunctional map legend that offers a key to nothing — highlights how those graphic and intellectual codes and conventions have become naturalized to the point of invisibility. 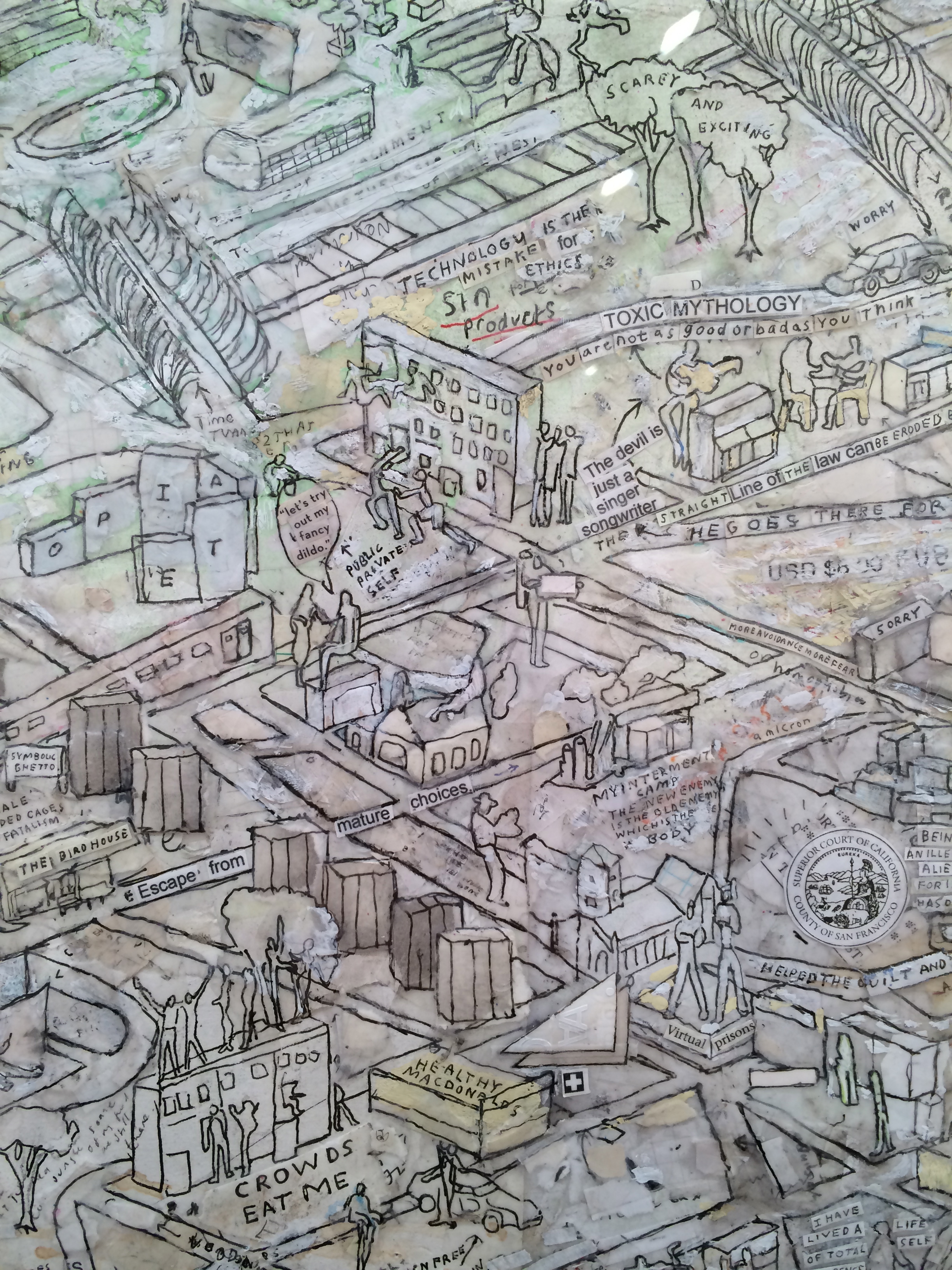 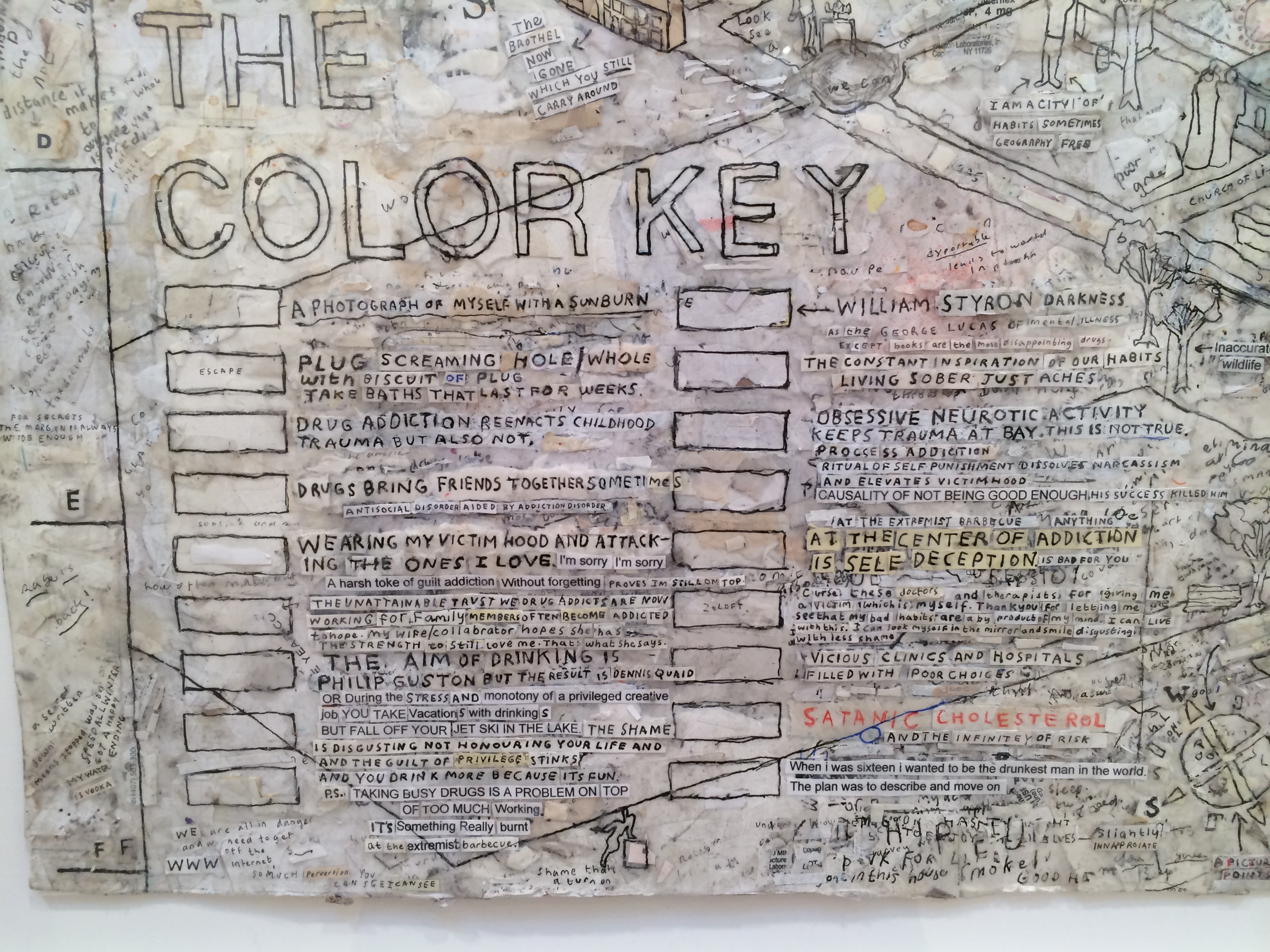 His Subculture Promenade (is grilled with neon), 2013, repurposes the tourist map to reflect…. uh… well, honestly, I don’t quite remember — but it’s certainly not the kind of cultural attraction that typically warrants such conventional representation in an official “landmark”-style map. 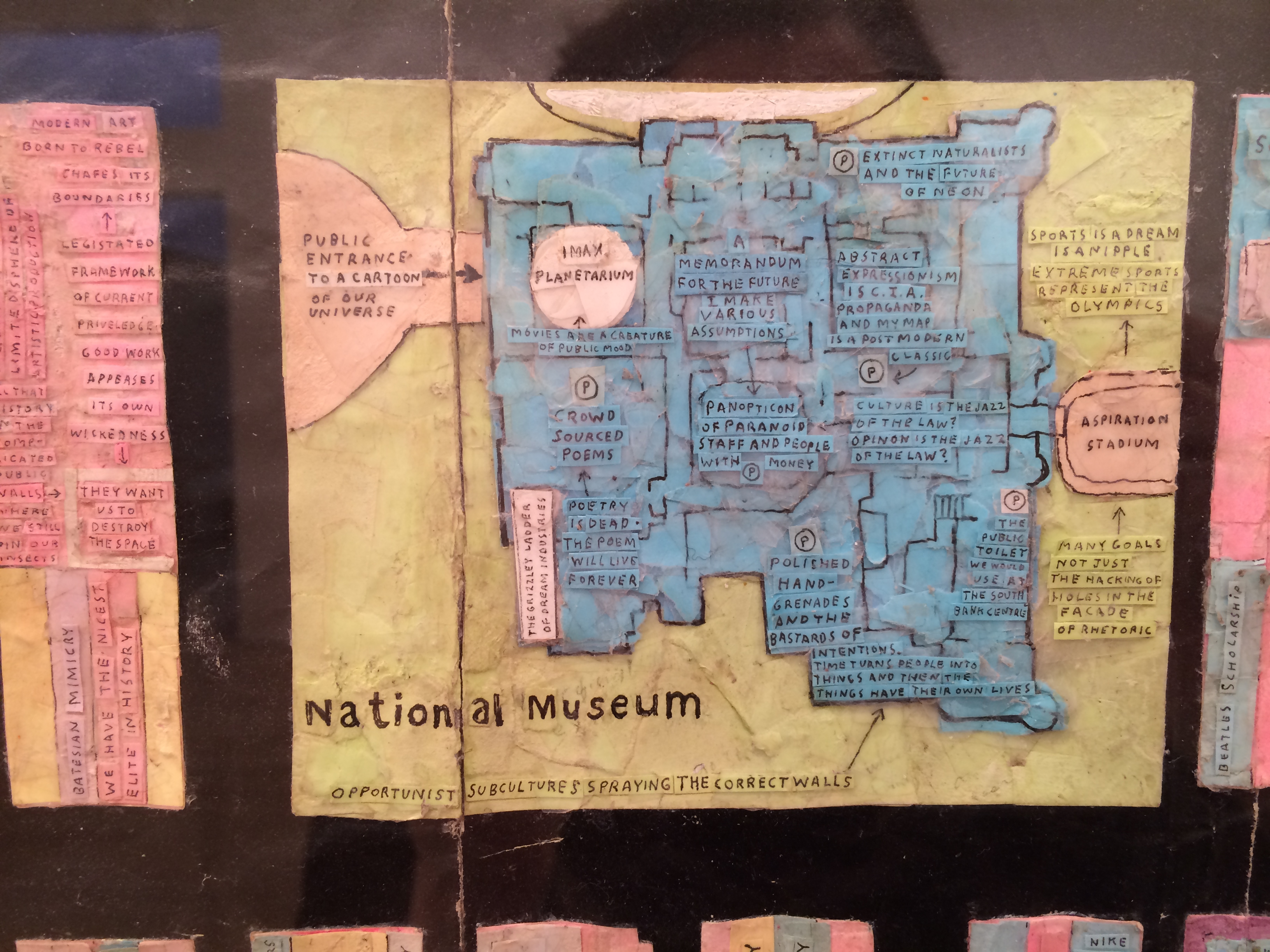 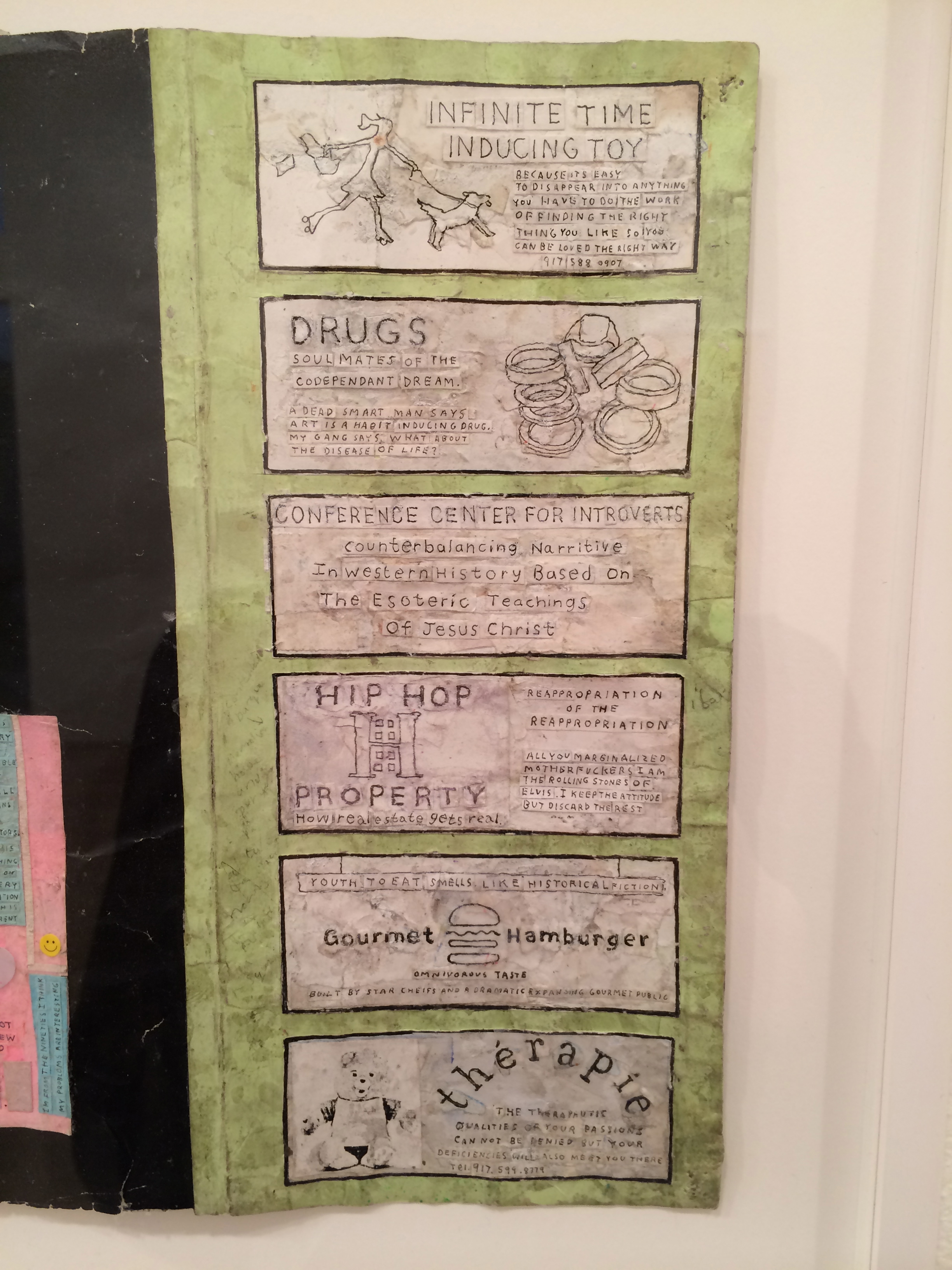 Inbetweens is a paper tapestry with strips representing random things and concepts and life-events — “music and architecture,” “good ideas and expensive ideas,” “my dropped pen top and the brutal world,” “crunching the toffee of common enemies and the politics of soap” —  running horizontally, and strips of “in-betweens” running vertically. The bottom, left ragged, suggests that our individual lives are indeterminate; where we end up depends upon how we traverse the maze in-between these myriad chance occurrences and random obstacles and opportunities. 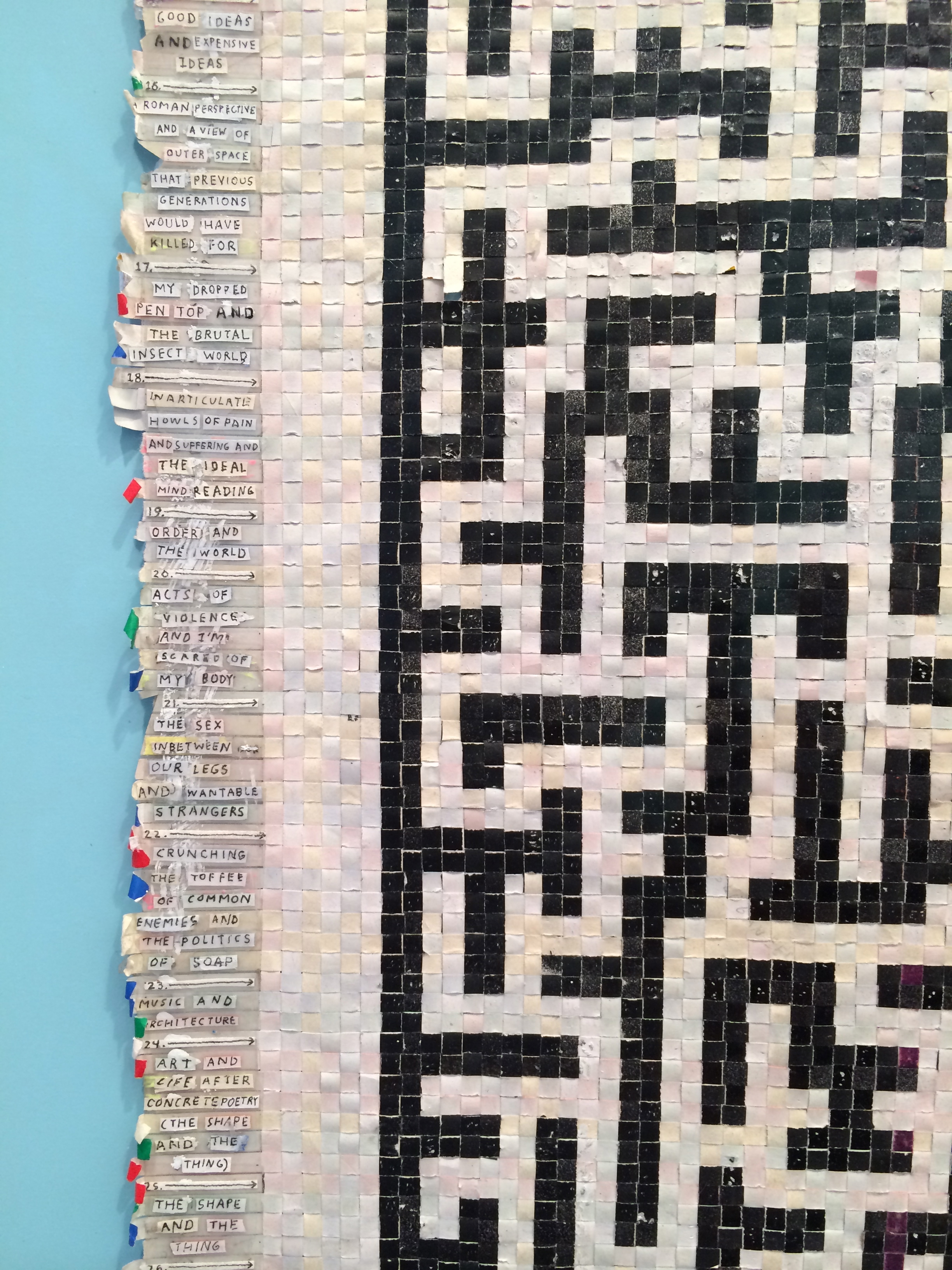 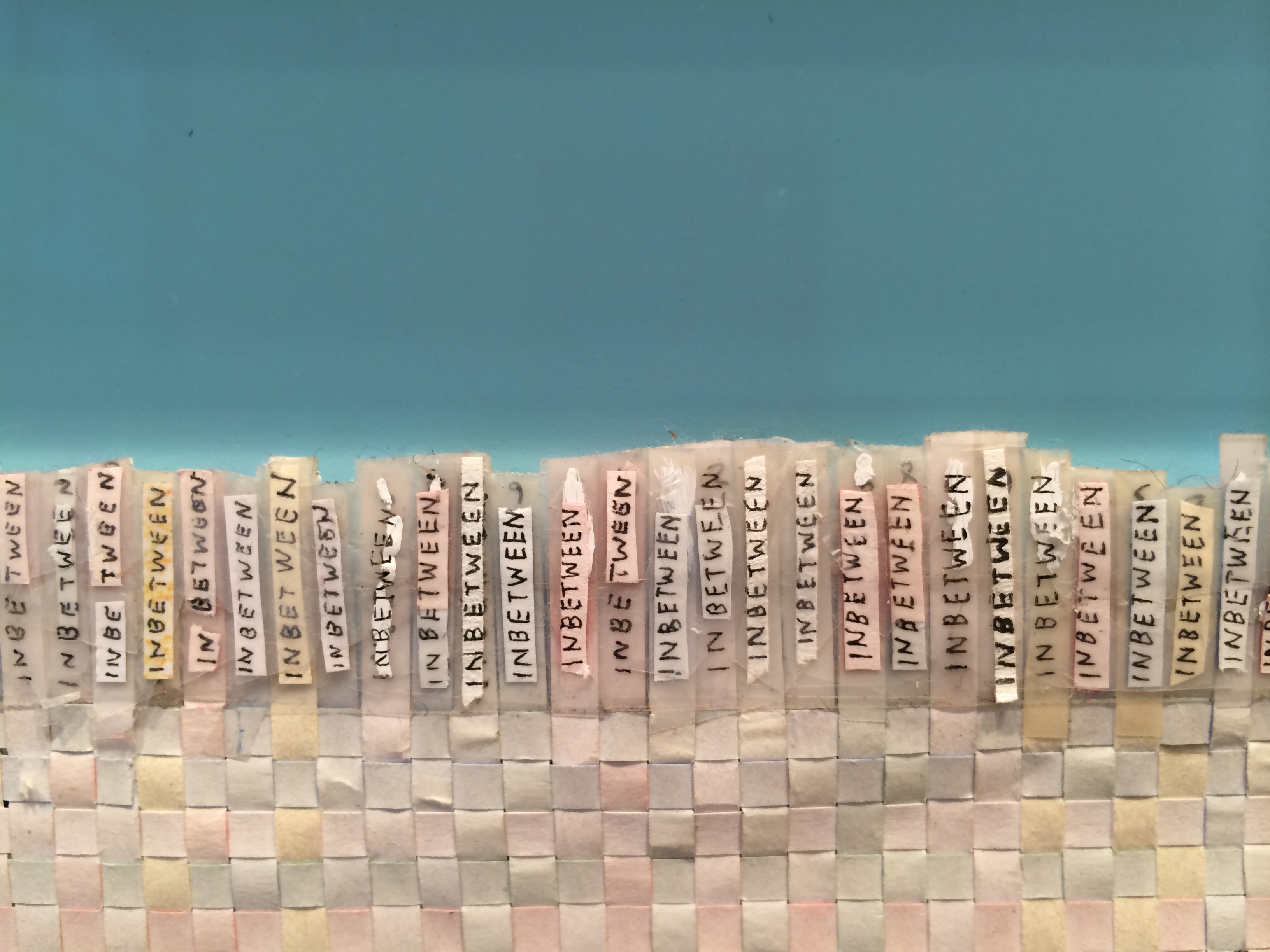 Yeah, that’s a lot of Evans. But he’s made quite an impression on me each time I’ve seen his work; he’s moving up on my “favorites” list. In a similar vein (pun intended!; you’ll see what I mean later) is Candy Jernigan’s show at Greene Naftali (God, their website is just awful). Jernigan uses lists and diagrams to catalogue, chronicle, and map the mundane — and sometimes tragic — details of her life in the East Village in the late 80s. She, like Evans, collected ephemera — including everything from crack vials (get it? vein?!?) to things that had been run over by cars — from the city streets, and developed systems for indexing them. 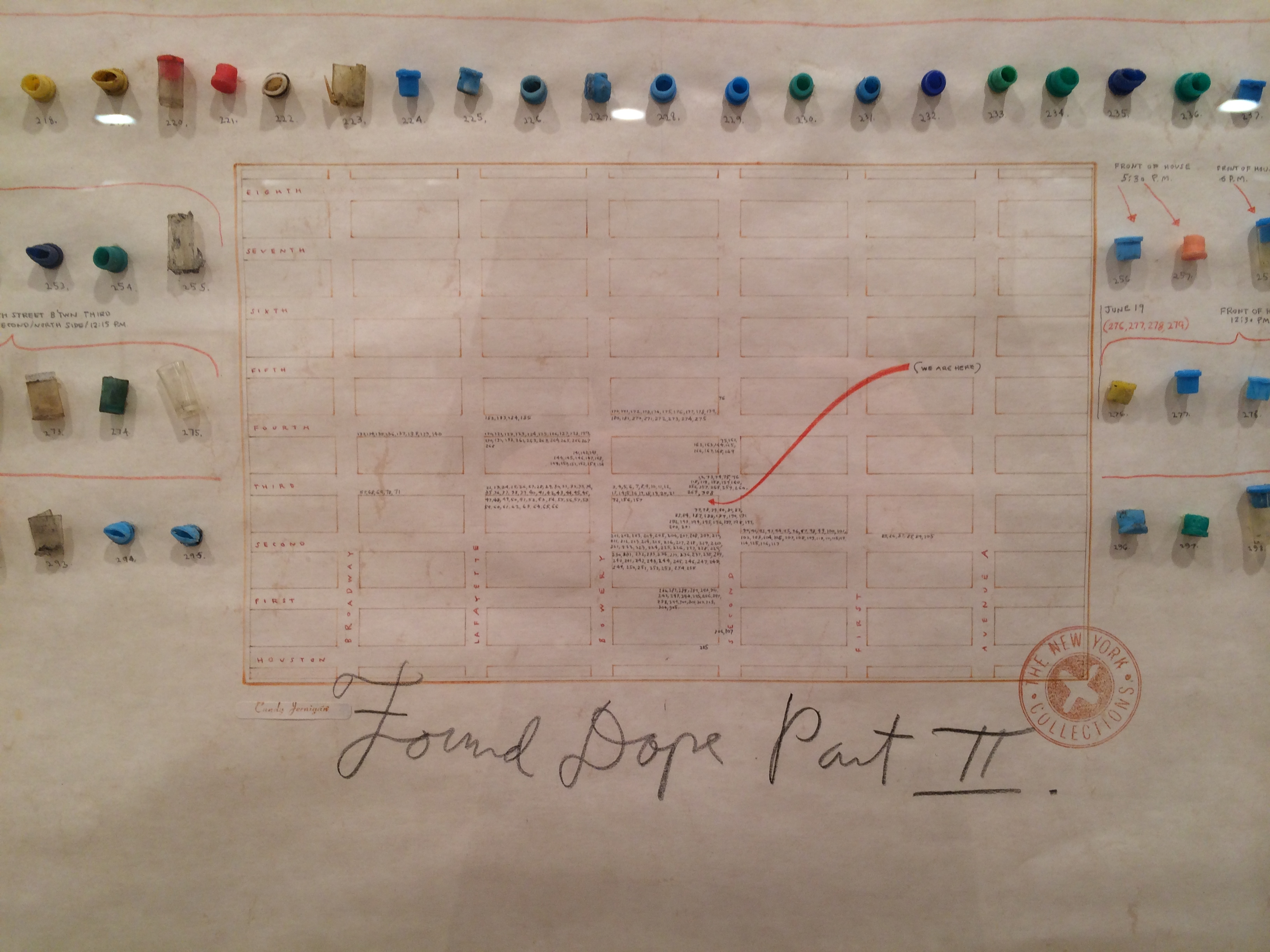 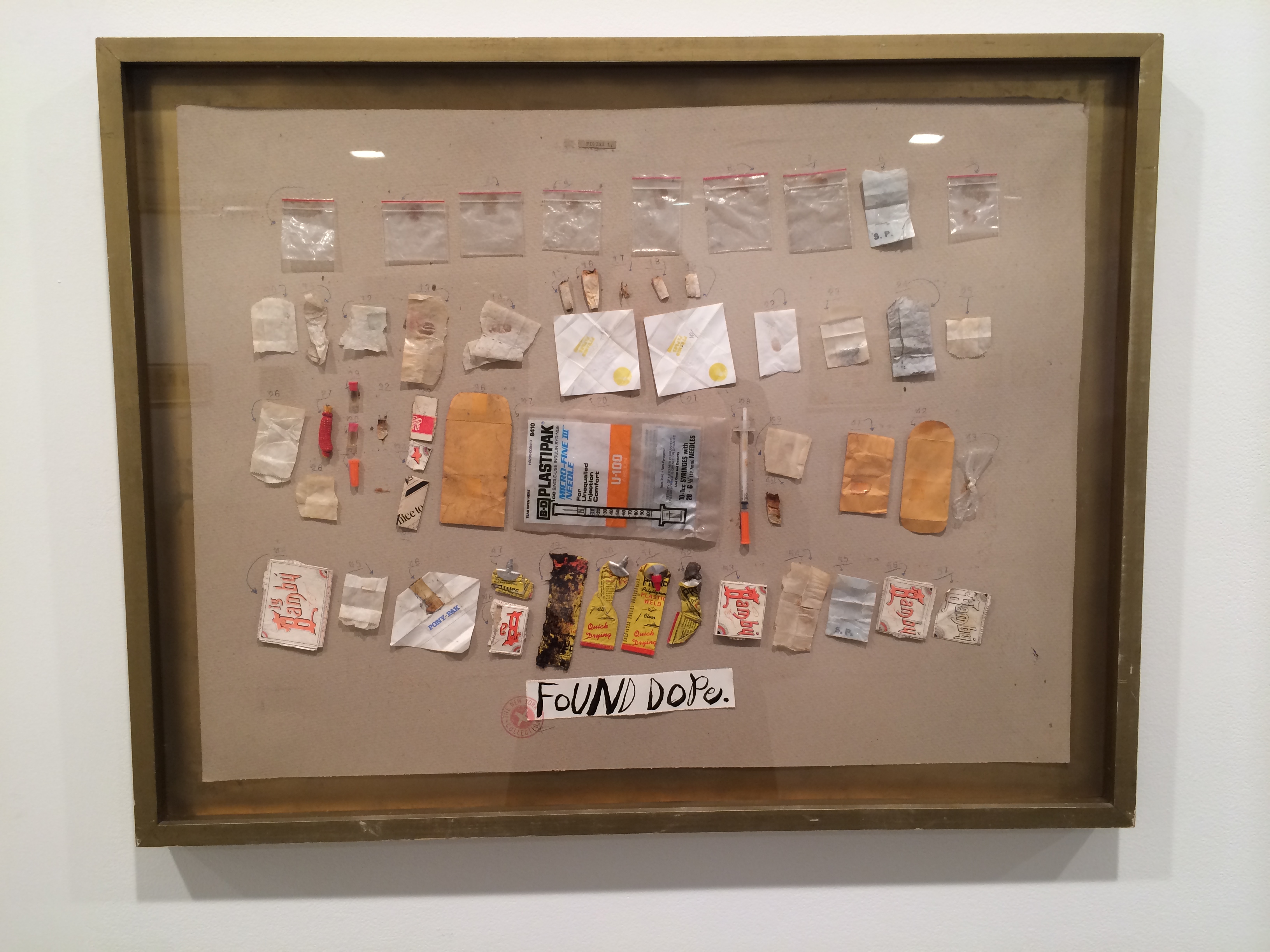 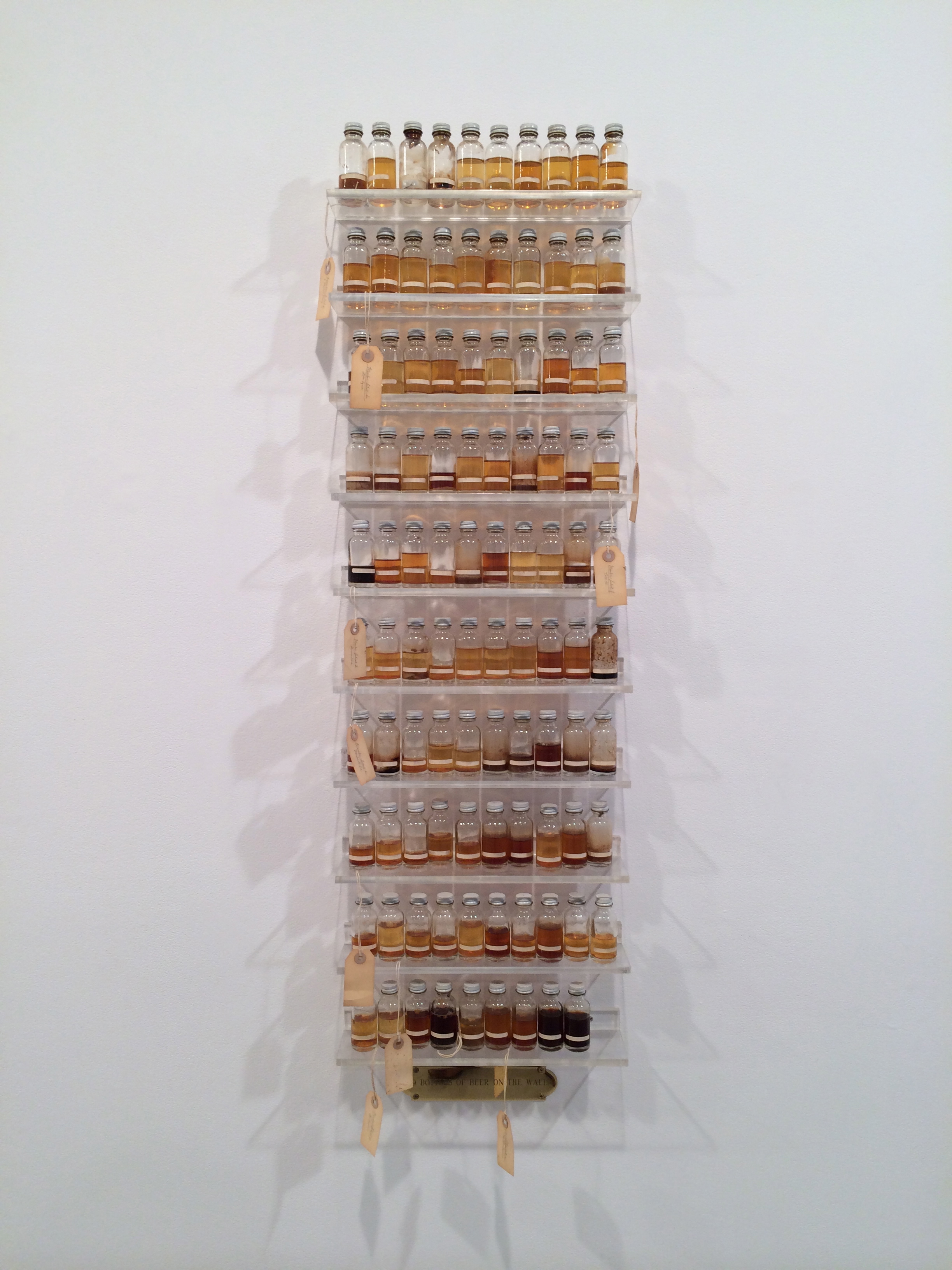 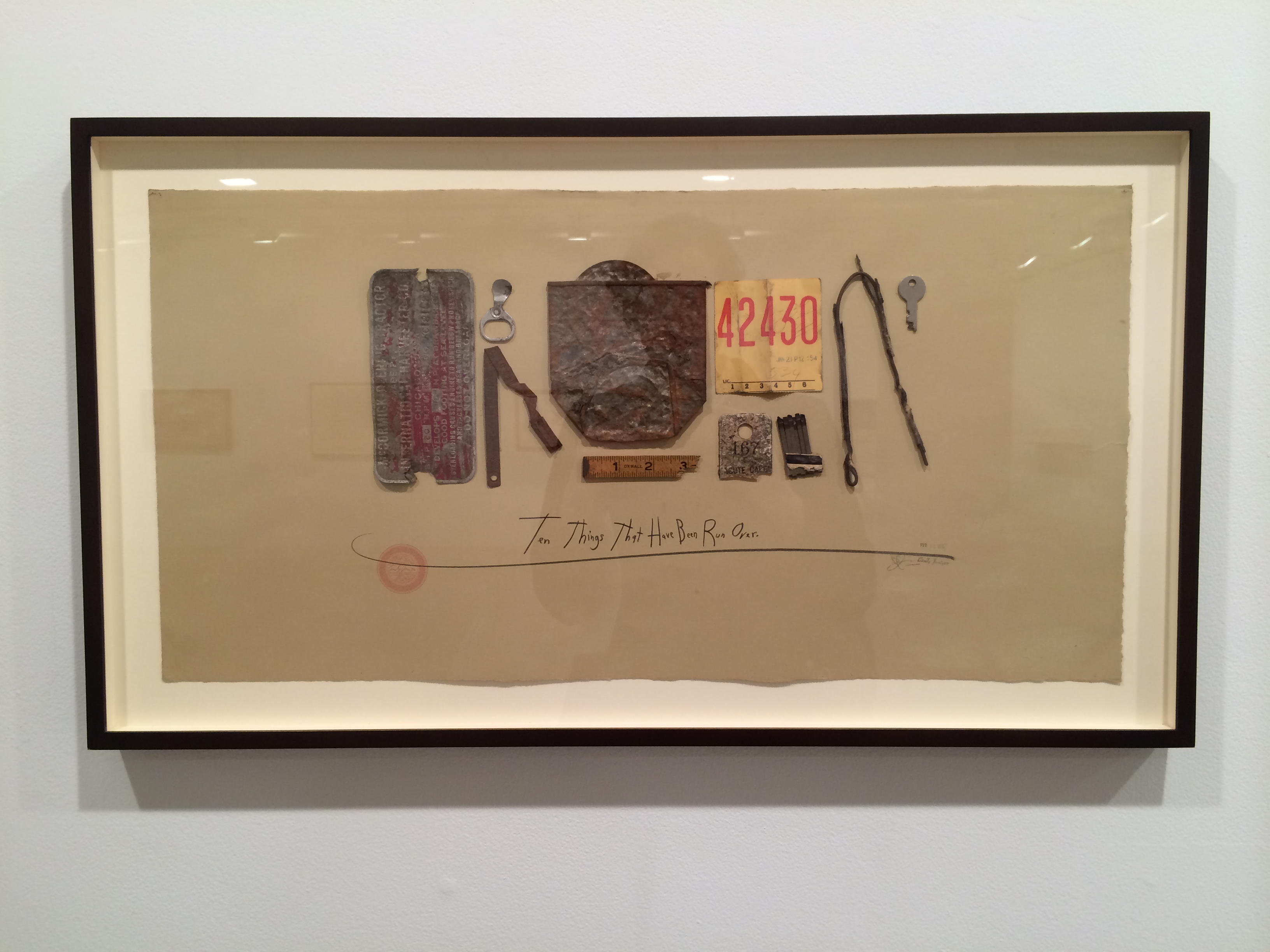 As the gallery notes, Jernigan “charted her daily life and movements, elevating the banal” — from Cheez Doodles and cans of beans to hotdogs and buttons — “into objects of indexical beauty. Homing in on what is otherwise overlooked, Jernigan created haunting records of places and the things that used to exist there.” 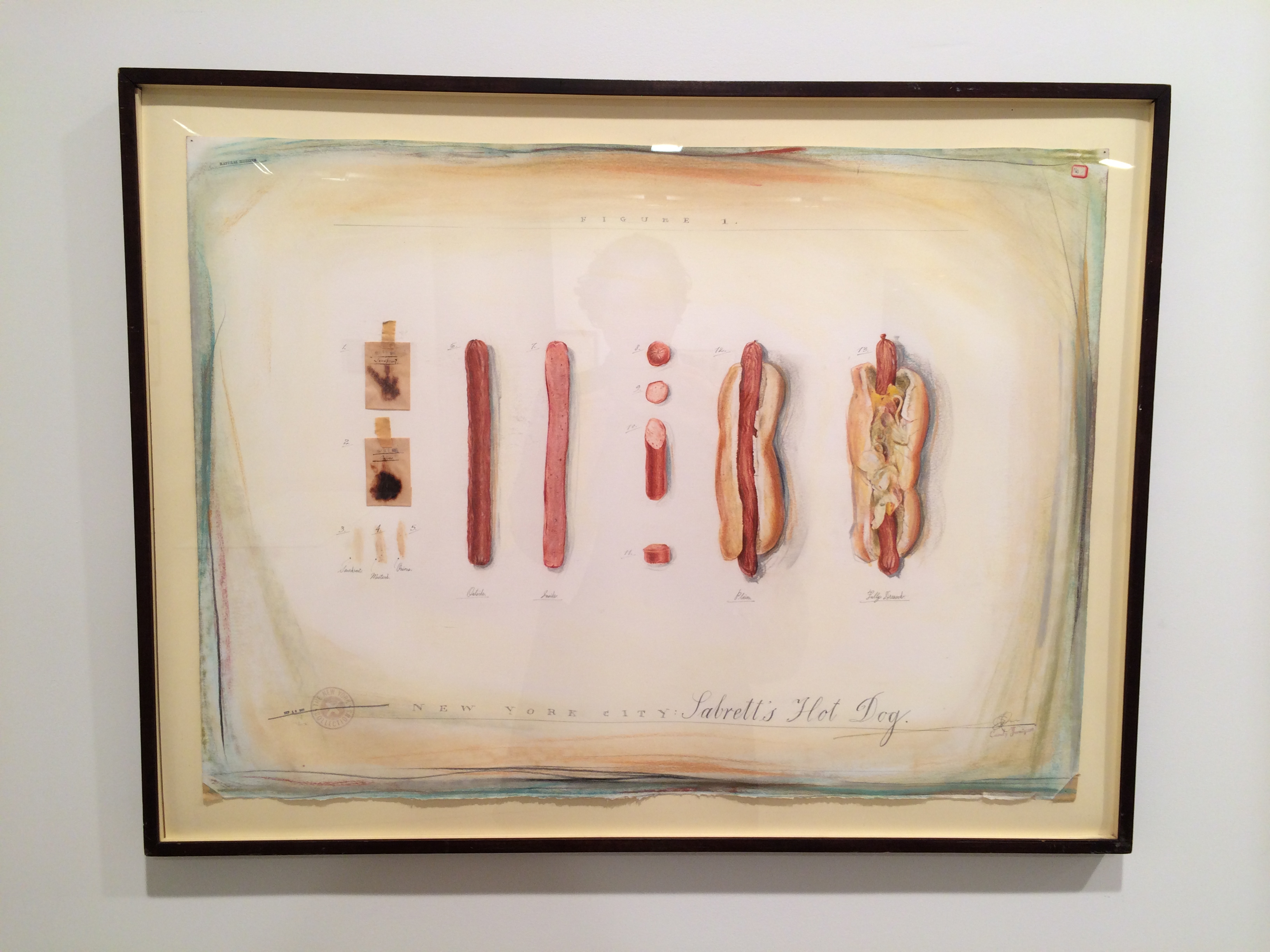 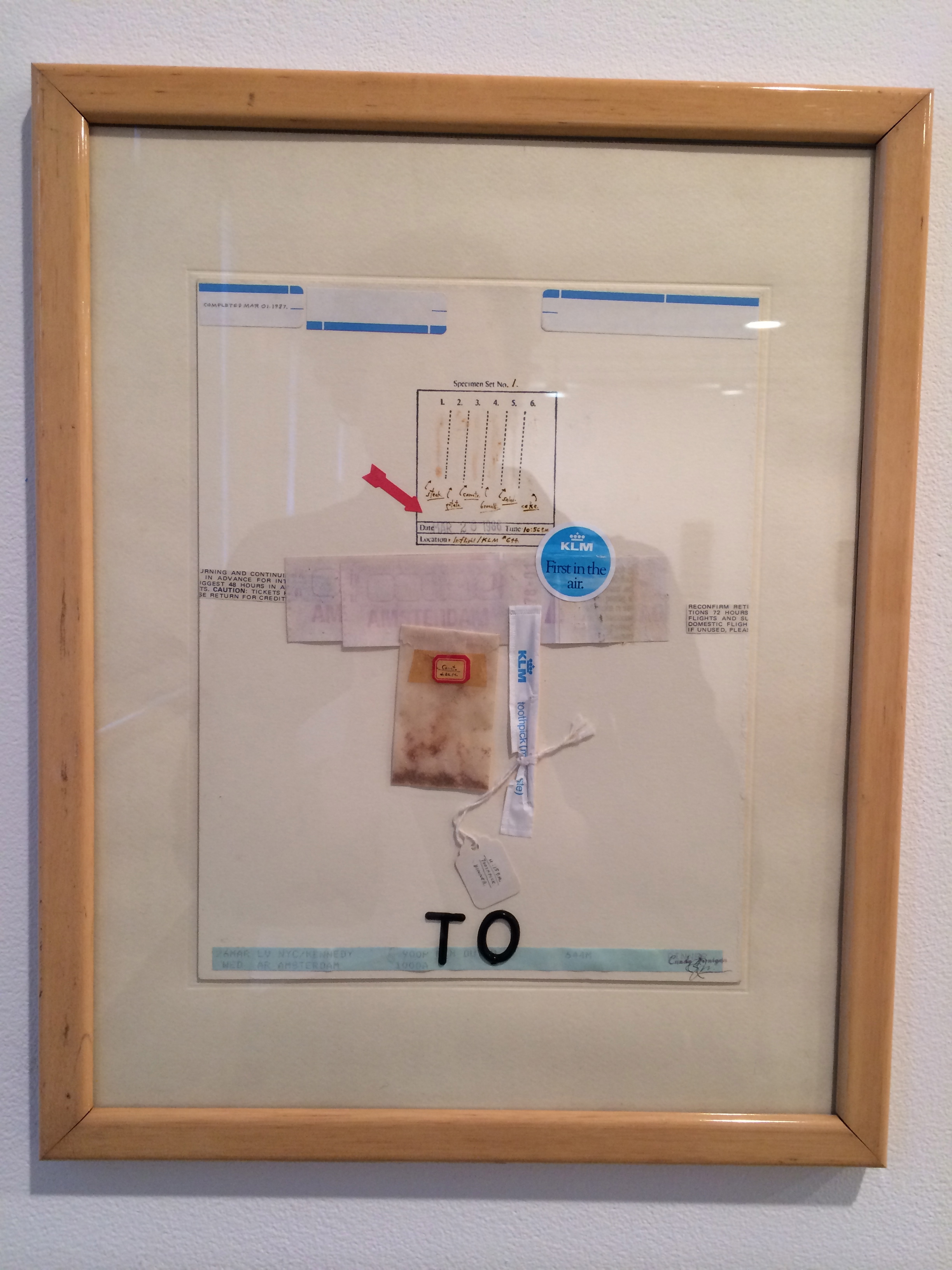 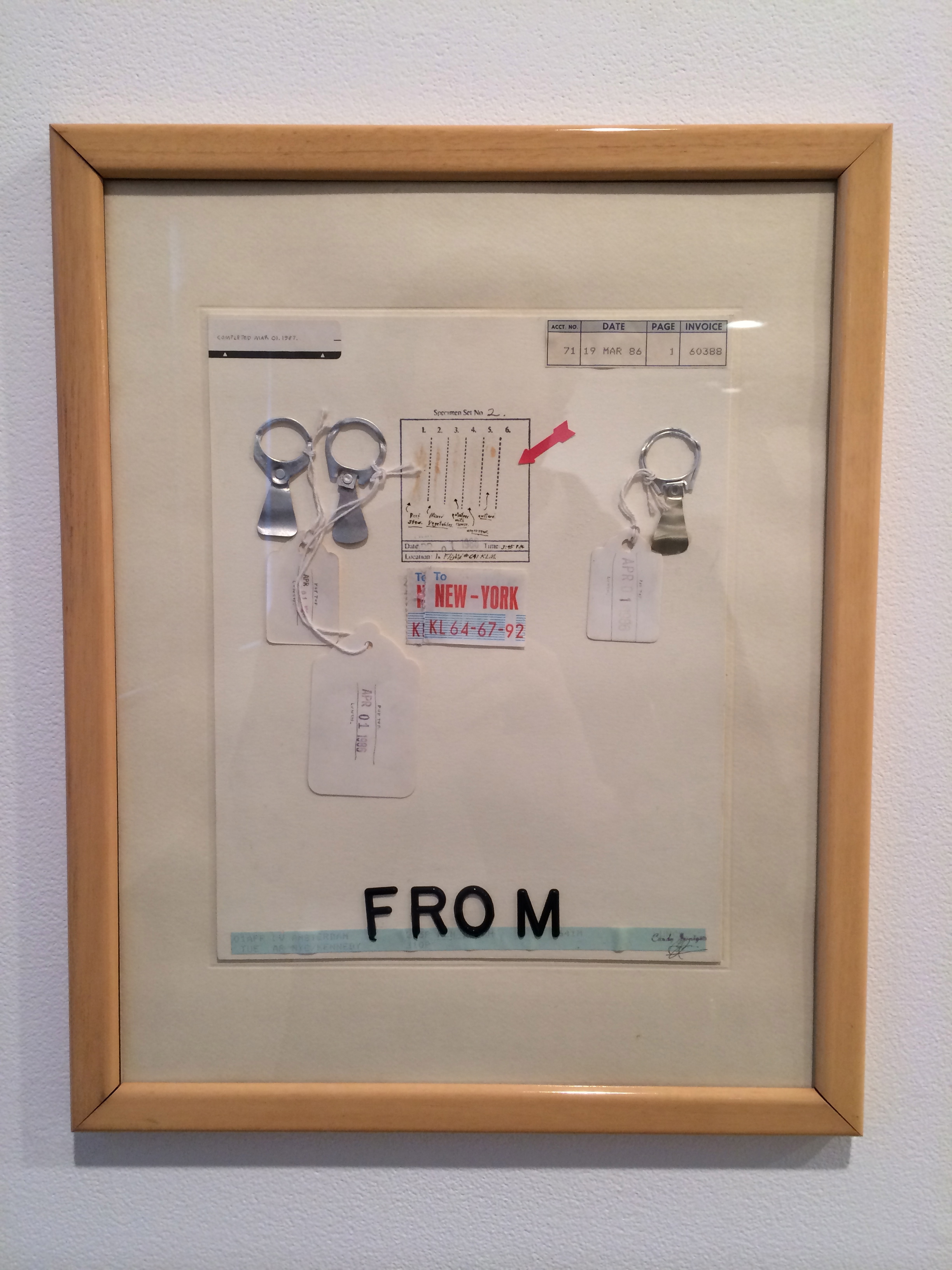 Loren Monk, whose YOU ARE HERE was showing at Freight + Volume, also employs the diagram — in his case, to trace an alternative history of art. Rejecting values imposed by “forces outside the arts community” — by which we might assume he means market values — he focuses instead on the “community of artists.” He suggests that, “if people were able to relate to all this historical information and see how they fit in, it might support and inspire their own work and reduce their sense of alienation.” It seems only fitting, then, that he’s adopted modes of presentation — the infographic, the flowchart, etc.  — and rejected their market- and efficiency-driven qualities. Instead of drawing on a bank of impersonally-generated data, he does his own research; instead of relying on algorithms and computer programs to render a visualization, he hand-paints his own; instead of aiming for a smooth, seamless presentation, which often lends credibility to — and even reifies — the data, he displays all the imperfections of the human hand, which point toward all the biases of subjective interpretation. His infographics are slow, personal, subjective, and full of character — and they reflect their author’s human connections with the human “data” they represent. 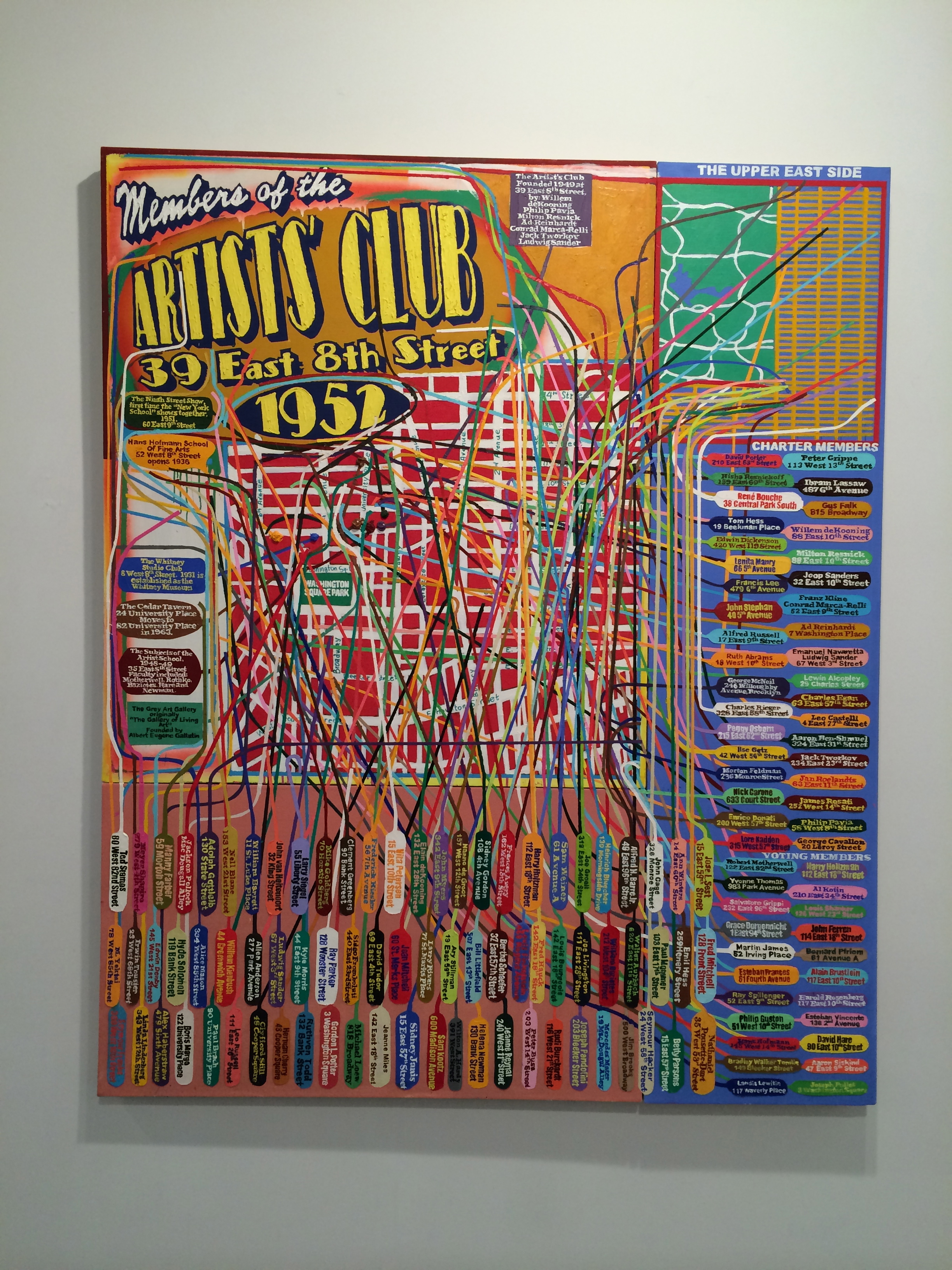 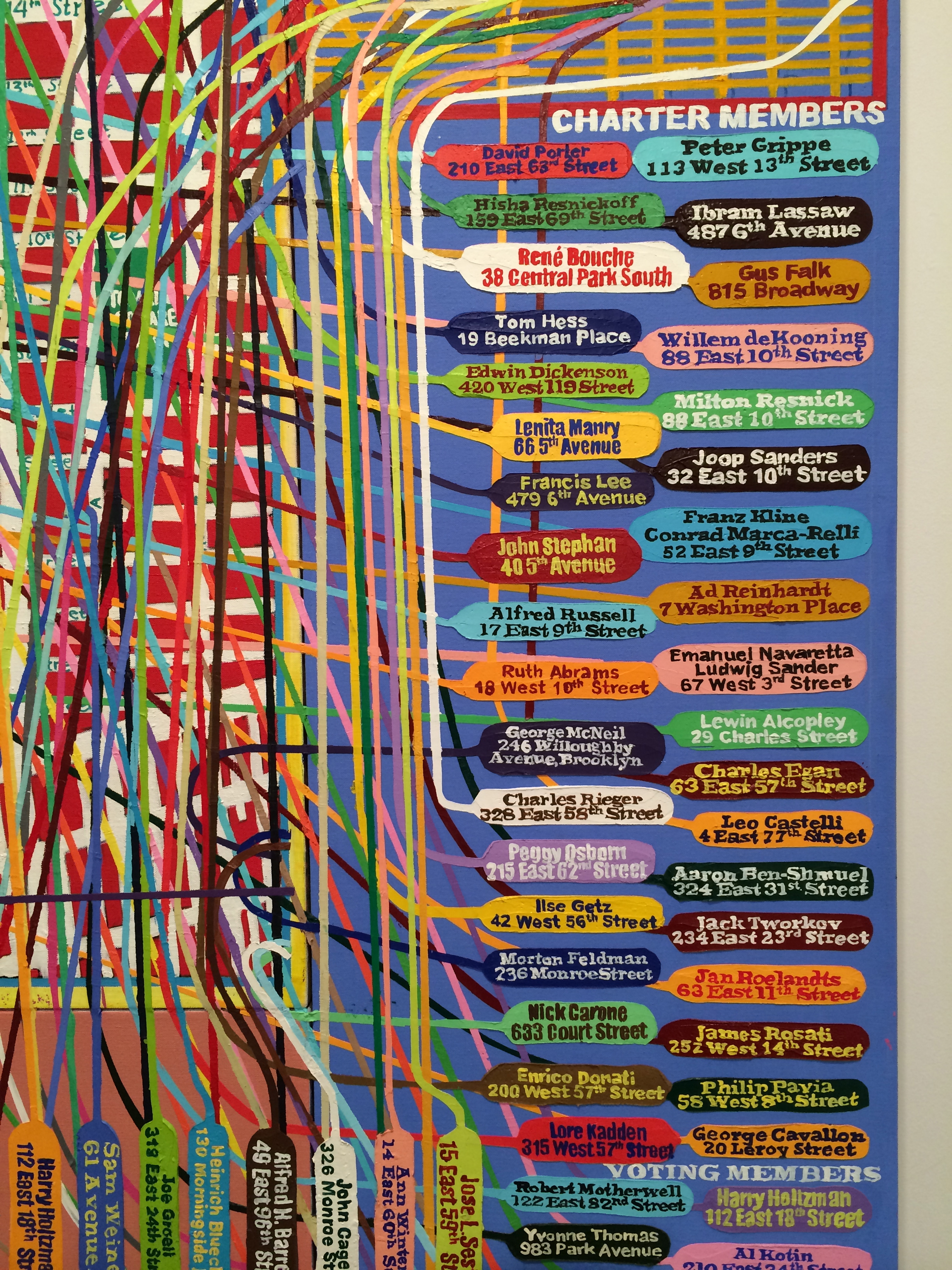 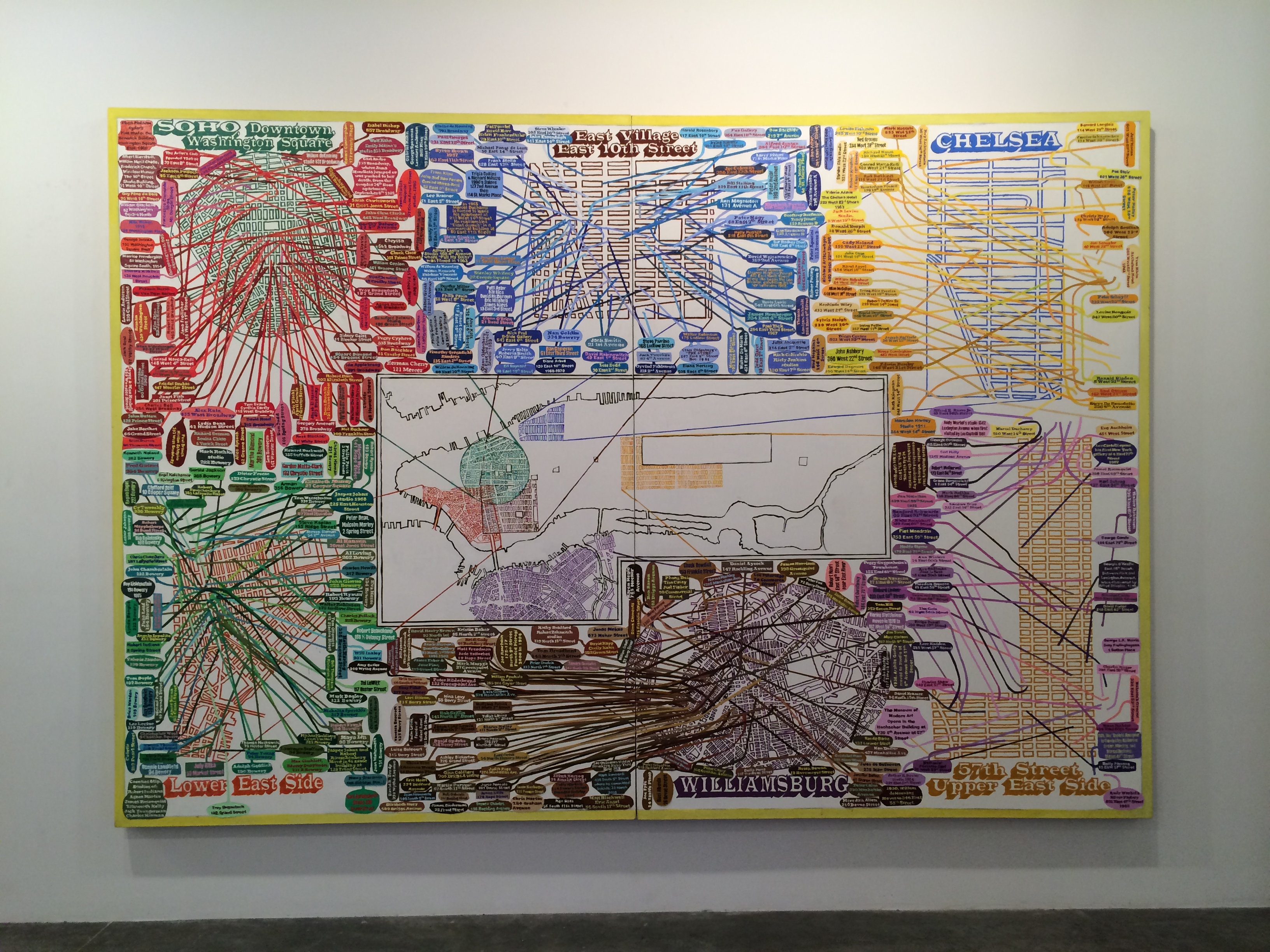 As in Evans’s and Munk’s work, text was central to the Thanks for Writing show at 601Artspace. The show was rather simplistically conceived — the curator seemed to want to offer a typology of all the ways that text and art relate to one another — but no matter: I have a special fondness for language- and text-based art, and some of the artists on display here are among my favorites, so I was primed to enjoy this show, regardless of how well (or poorly) it was sold in the press release. 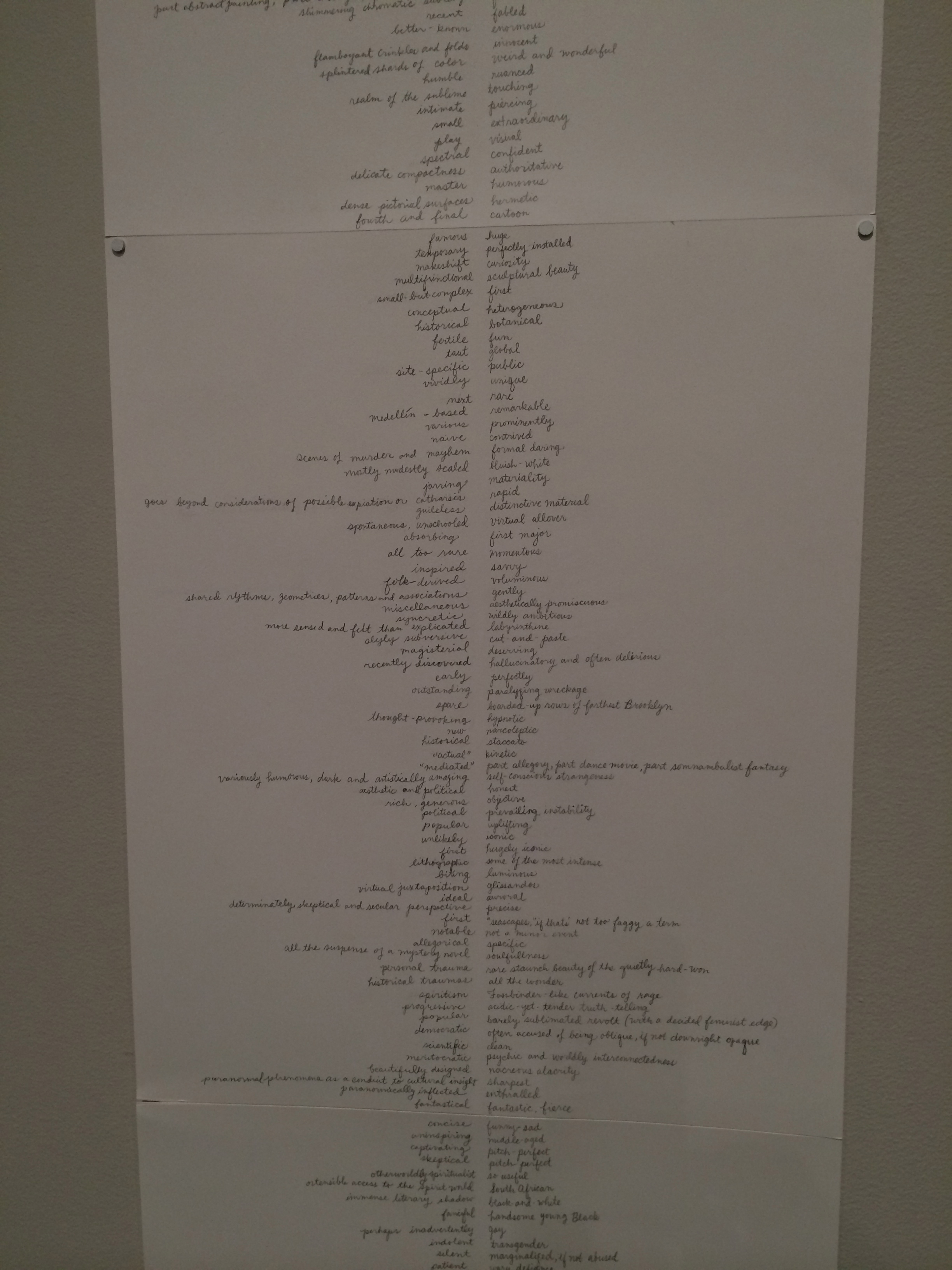 Now, time for a little interlude. I typically take a whole mess of photos on these gallery fieldtrips, and, invariably, among them are a few accidental shots. Like these: 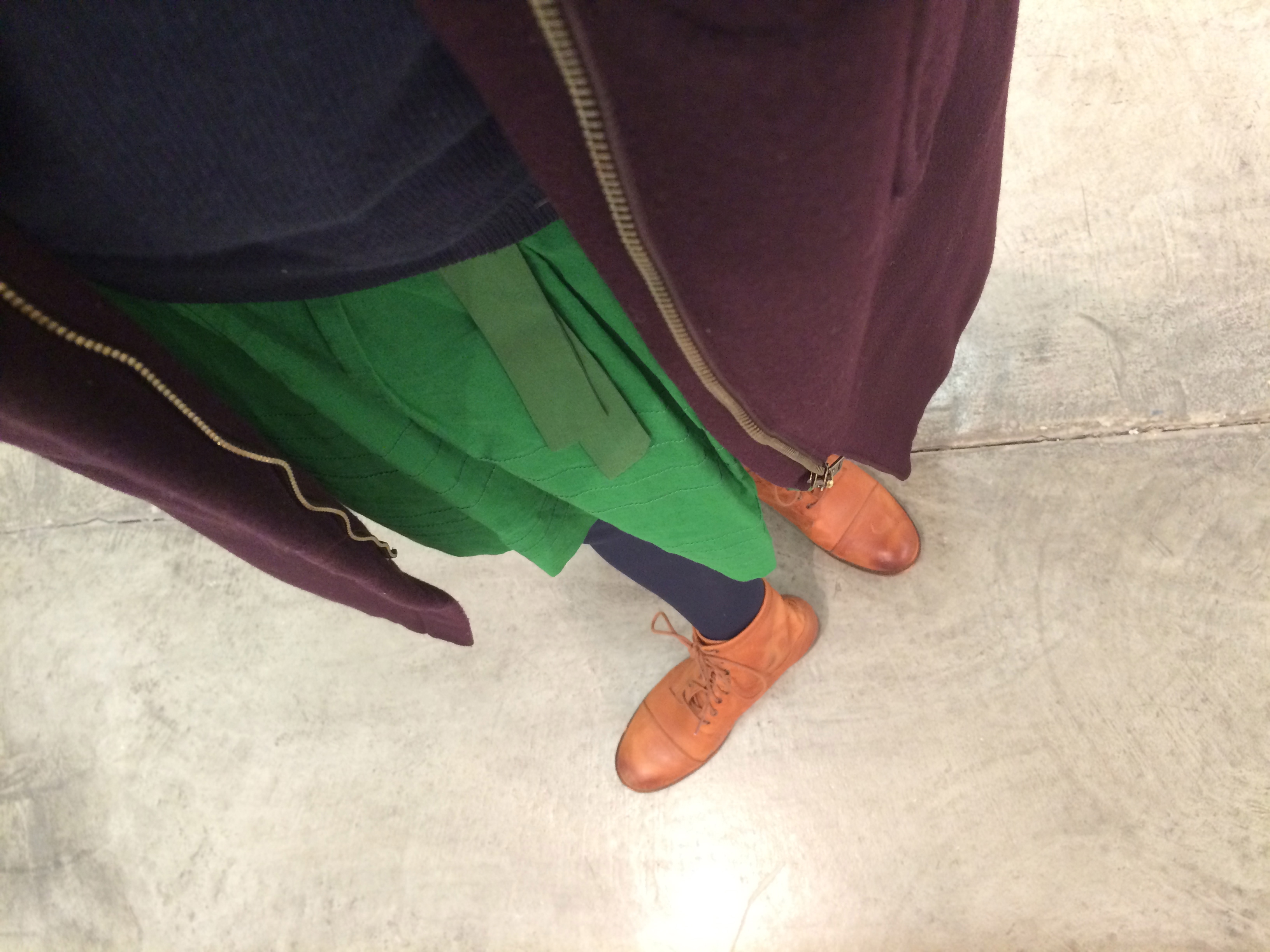 Back to business! Many of the aforementioned artists are working with textual forms and linguistic conventions. Those themes were very much present in Luke Stettner and Boru O’Brien O’Connell‘s duo-show at The Kitchen. Stettner makes serial, paper-based textual work — including, on the left wall, a letter from William Carlos Williams, edited into 19 framed parts that alternate between mundane observations and profound statements about important stuff, like life&death.

I was totally charmed by O’Brien O’Connell’s video — but because this post has already taken me a ridiculous amount of time, I can’t launch into a thorough critique here. The Kitchen’s description is rather overstuffed with mentions of industrial design and modes of representation and craft and repetition and phobias and schizophonia. What I saw instead was a beautiful tw0-channel video dealing with semiotics, standards, and structure — in language and design.

Boru O’Brien O’Connell, excerpt from Every movement does have a background, but every background is potentially useless, 2013-14 from The Kitchen on Vimeo.

And here’s where we break, for the most part, with the text theme, and I quickly gloss over the other shows I saw yesterday.

Kelley Walker’s show at Paula Cooper was likewise concerned with semiotics and form. She manipulates 1950s-70 Volkswagen Beetle ads by first extracting circular cut-outs, then distorting them using the 3D modeling software Rhino, converting “the flat surfaces of the magazine pages… into volumetric shapes.” She does similar stuff with album covers. While this work didn’t resonate all that powerfully for me, it is mildly interesting that she’s taking the flat representation of the car — its often playful representation through the iconic ads of Doyle Dane Bernbach — and pushing that 2D textual “car” through a 3D fabrication process, thus adding volume and shape. In a sense, we’re transforming the Saussurean signifier (the car-as-advertisement) back into the signified (the 3D car). Or maybe I’m thinking too much about this. 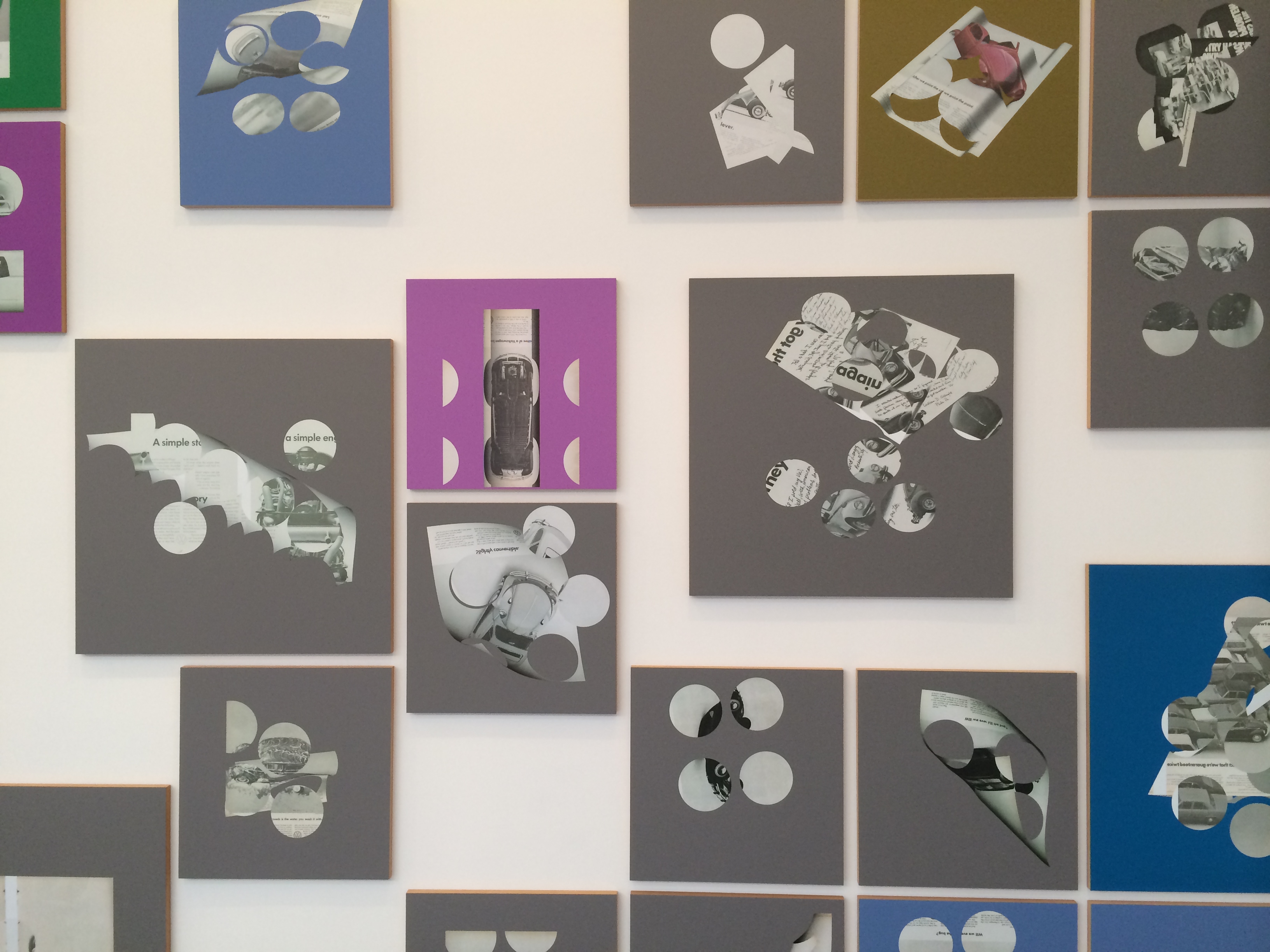 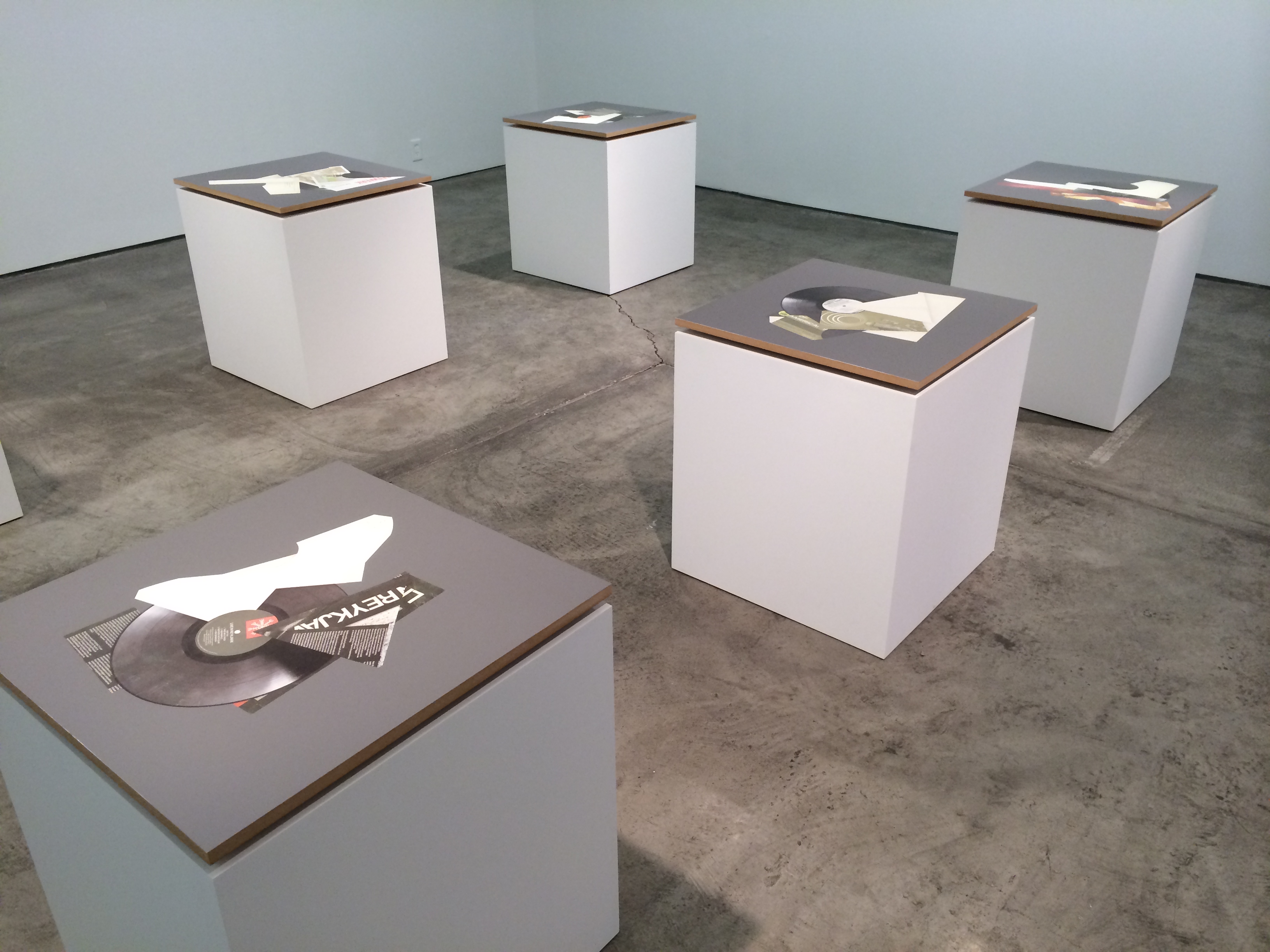 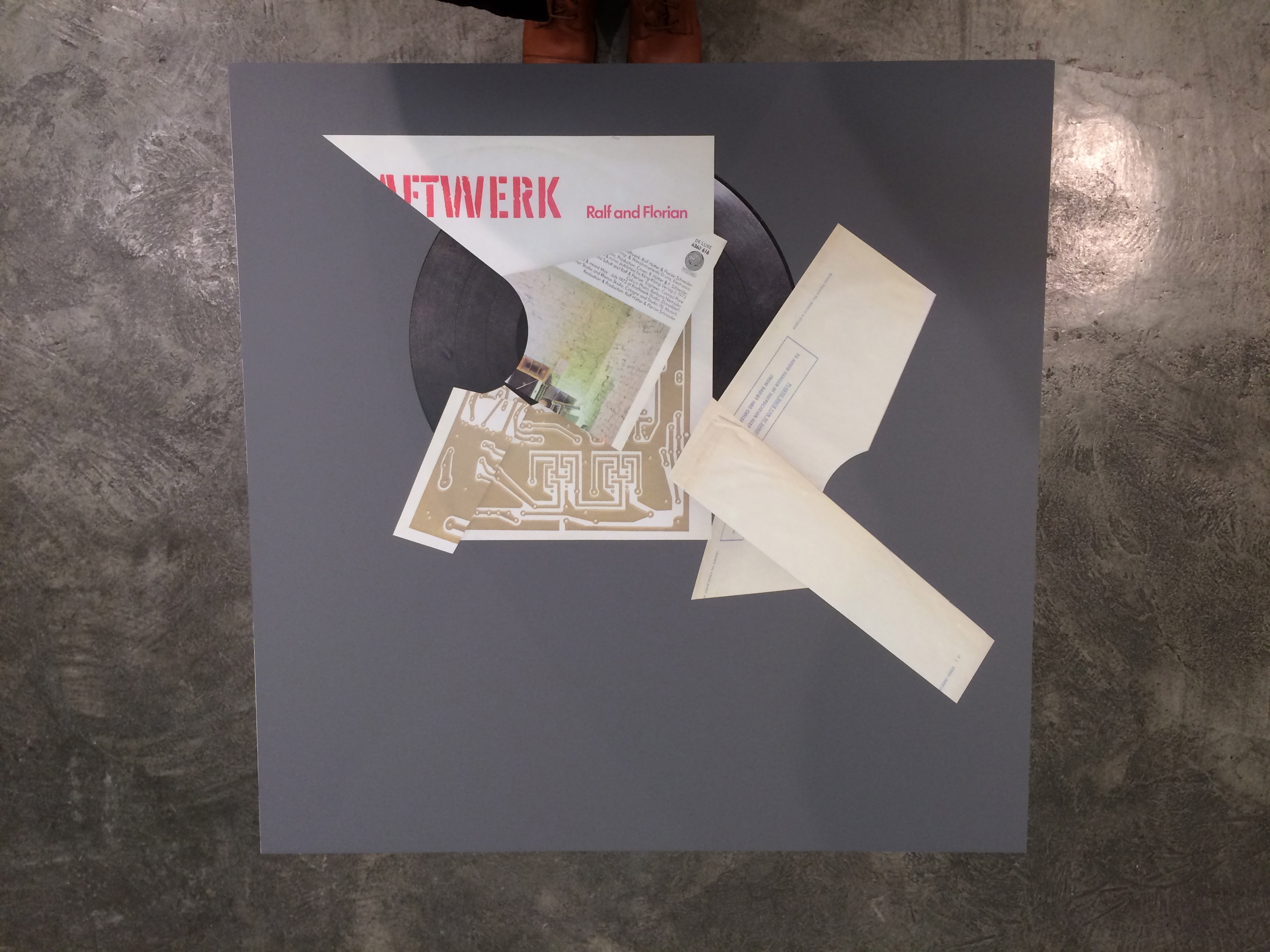 And yet more play with form and fabrication in Rómulo Celdrán’s show at Hasted Kraeutler. So Oldenberg. Except Celdrán’s work, according to the gallery, is handmade. 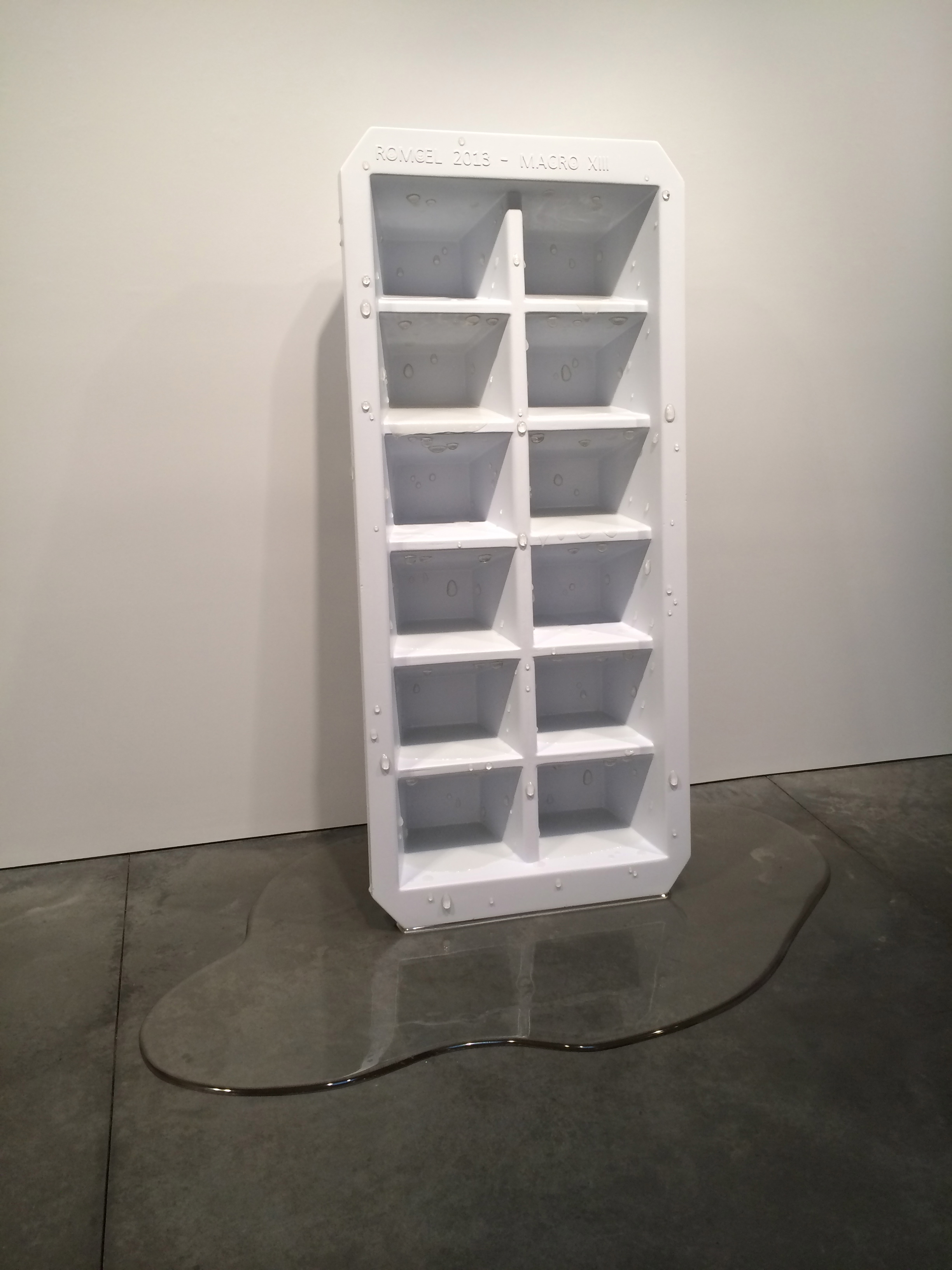 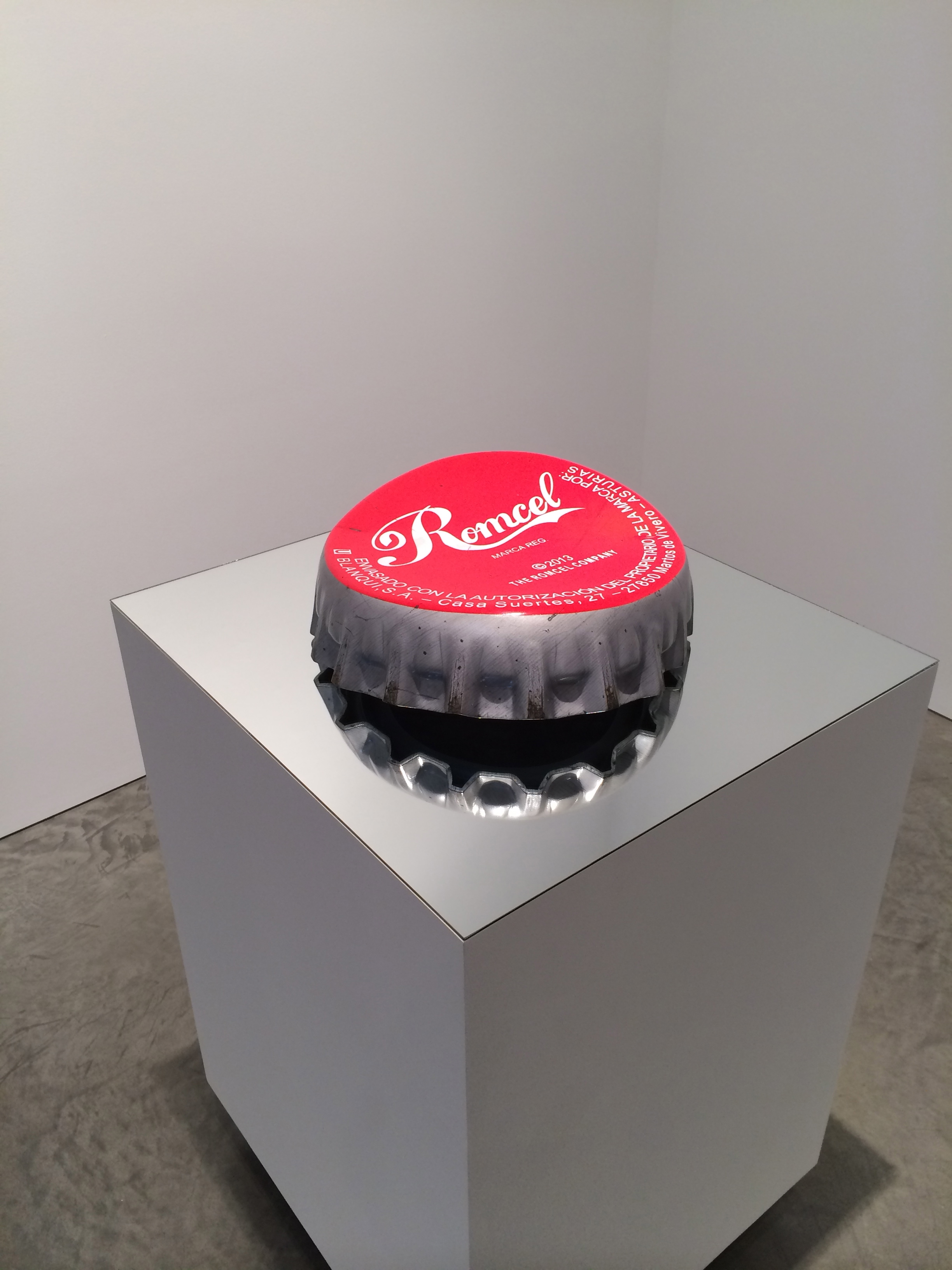 And then I stopped by David Zwirner’s one-year-old 20th Street gallery, which, surprisingly, I’d never visited before. Man, this guy’s going gangbusters; he’s building himself quite an empire. Anyway, while I waited my turn to see the Doug Wheeler installation, I checked out the upstairs exhibition of prints by Donald Judd, Dan Flavin, and Fred Sandback. 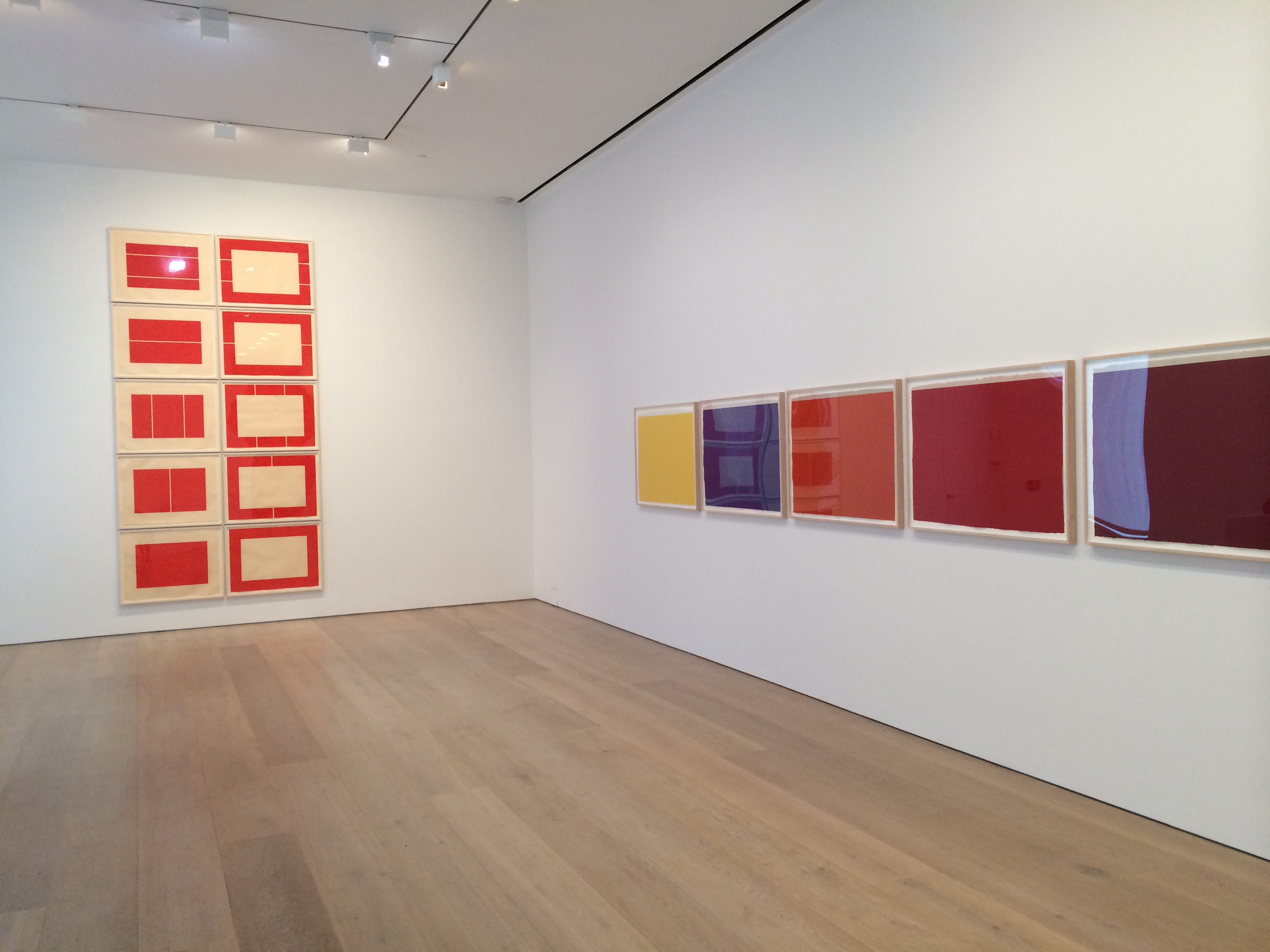 And then I went downstairs, put on my little white booties, and entered Wheeler’s “rotational horizon work.” Here’s what inspired the piece:

An avid flyer since childhood and an eventual pilot himself, Wheeler has long been fascinated by the illusory quality of landscape as glimpsed from the vantage point of an airplane. Approaching an ever-receding horizon, passengers are able to watch the terrain shift rapidly as though it were a stage set laid out flatly in front of them when, in actuality, their flight path traces out the contours of the globe. By mimicking the sensation of the earth’s rotational pull and curvature, Wheeler alters the traditionally static viewing experience of a work of art, thereby destabilizing our innate sense of equilibrium and imparting the feeling of moving with the earth towards an unreachable horizon.

I can’t say that I gave in and allowed myself to experience the destabilization. But it certainly was cool, and thanks to the domed ceiling, the acoustics were fantastic.

And finally: Michael Wilkinson’s Citadel: The fortress commanding a city, which it serves both to protect and to dominate. Sheesh. We could have a field day interpreting this one. But we won’t. ‘Cause I’m tired.