This Sunday, the final day of the annual SCMS conference in Seattle, I’ll be leading a workshop on libraries, labs, and other spaces where people access, make, and learn about media. I’m particularly grateful to all the fantastic people who’ve agreed to contribute. Here’s more info about the workshop and its participants:

When Rem Koolhaas’s Seattle Public Library opened its doors to the public in 2004, the building represented a radical rethinking of how media-spaces could blend the analog and the digital, media-access and media-making, the provision and the creation of knowledge. Now that this renowned building has reached its tenth anniversary, we would do well to consider how the SPL has evinced a new approach to conceiving and designing spaces where people read, watch, hack, and engage with media in myriad ways. In this workshop we’ll explore a variety of media-spaces – from libraries and laboratories to makerspaces and popups – in an attempt to consider (1) how changes in the media landscape, including new theoretical contributions from media studies, might inform the design of more functional and responsive environments for media engagement; and (2) how considerations of such spaces might make productive theoretical and methodological contributions to media studies.

Mattern will kick off the workshop by situating the discussion within the context of the SPL anniversary. Balsamo will then discuss current efforts to think about how networked technologies provide the infrastructure for fluid and mobile learning experiences that take place in distinct, but connected nodes: the school, the library, community centers, museums, domestic spaces, and other cultural venues. Mickiewicz will expand our theorizations of the notion of access as it relates to contemporary library design and use by considering a broader spectrum of users and patrons, such as those with media impairments or disabilities, as well as the socio-economically disenfranchised. Sayers will outline strategies for building “popup makerspaces” that intercross critical media theory and critical making, with a particular emphasis on minimal computing. And Svensson will explore the curatorial practices, particularly those sensitive to the materiality of technology and learning, that are necessary to make media-spaces functional.

Presenters will share plans and models of exemplary media-spaces, prototypes generated in their own labs, and documentation of how these media spaces are used, in an attempt to prompt discussion. Ultimately, we hope the workshop will inspire participants to get involved in the design of their own local libraries, labs, and learning environments, and to champion the unique perspectives that media studies scholarship can bring to these design deliberations.

Anne Balsamo is Dean of the School of Media Studies at The New School. Her recent book,Designing Culture: The Technological Imagination at Work (Duke, 2011) examines the relationship between culture and technological innovation, with a particular focus on the role of the humanities in cultural innovation. Previously she was a Full Professor at the University of Southern California, where, from 2004-2007, she served as the Director of the Institute for Multimedia Literacy.

Shannon Mattern is Associate Professor of Media Studies at The New School. She writes about archives, libraries, and other places of media consumption and production; media infrastructures; and media exhibition. She’s author of The New Downtown Library: Designing with Communities (Minnesota). Her work has been supported by grants and fellowships from the Mellon Foundation, the Graham Foundation, the Canadian Centre for Architecture, and the Korea Foundation.

Paulina Mickiewicz is a Ph.D. candidate in Communication Studies at McGill University. Her dissertation “The Bias of Libraries” considers the role that the library plays as a communications medium and cultural technology. Her research interests include new media technologies, cultural institutions, and the impact of digitization on questions of access. Paulina has been the recipient of, among others, an FQRSC Doctoral Fellowship, an H. Anthony Hampson Award, and a Wolfe Graduate Fellowship.

Jentery Sayers is Assistant Professor of English and Director of the Maker Lab at the U. of Victoria. His work has appeared in e-Media Studies; Int’l Journal of Learning and Media; Kairos; Computational Culture, among others. The Social Sciences and Humanities Research Council, the Canadian Foundation for Innovation, and the National Endowment for the Humanities have supported his research. His first book, How Text Lost Its Source: Magnetic Recording Cultures, is under contract with Michigan.

I’ll be heading to Seattle on Friday morning for the annual Society for Cinema and Media Studies conference. I’m keeping my fingers crossed that all the planes and trains are running on time — because shortly after we touch down at Sea-Tac, I’m due to participate in a workshop celebrating the new “Understanding Media at 50” special issue of the Journal of Visual Culture. Several contributors to and editors of the journal — Charles Acland, Richard Cavell, Wendy Chun, Raiford Guins, Erkki Huhtamo, Henry Lowood, and I — will be discussing what McLuhan’s canonical text has meant for our own scholarship.

And then on Sunday, I’m taking part in another workshop that I organized… 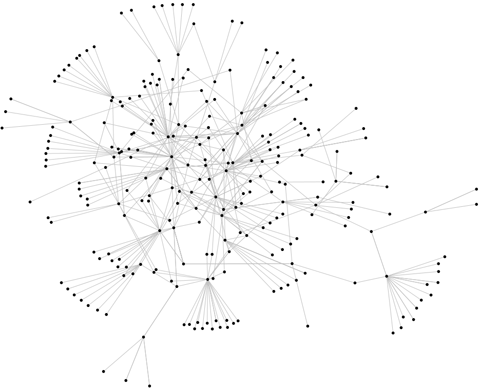 I’m part of a little advisory committee for this event, which promises to be fantastic:

Call for Papers and Presentations

This one-day symposium will bring together artists and scholars to examine the mediated and aesthetic dimensions of extraction and infrastructure. In the last decade, we have seen an explosion of artistic and scholarly interest in resource extraction, its cultural geographies, and the infrastructures that support it. We convene this symposium to interrogate the relationships between the representations of such dynamics and the larger forces that they condense: globalization, transmission, digitization, territorialization, labor migration, displacement, sustainability, security.

We aim to facilitate an idea-exchange between scholars and media artists whose practices critically assess the function, meaning and representation of lines, nodes and grids that undergird the energy, resource and information-dependent global economy, from oil pipelines to mining pits, and from undersea fiber optic cables to digital archives. What are the juridical, economic, bio-political and aesthetic dimensions of this accelerating age of extraction and consumption? How are these connections materialized in mediated works?

Scholars from a range of disciplines are invited, including: Media Studies, Architecture and Design and Geography. We also solicit media makers whose work operates in documentary, experimental and art contexts. The symposium’s keynote presenter will be Swiss filmmaker/researcher Ursula Biemann, who has for the past twenty years produced a respected body of essay films that interrogate global relations under the impact of the accelerated mobility of people, resources and information.

Please send a 200 word abstract to mediainfrastructure@gmail.com by April 10, 2014.

The Journal of Visual Culture has just published a special themed issue on McLuhan’s Understanding Media on its 50th anniversary. It features 30 mini-essays by a group of fantastic scholars — including, among others, Charles Acland, Jay David Bolter, Richard Cavell, Wendy Chun, Wolfgang Ernst, Richard Grusin, Erkki Huhtamo, Peter Krapp, Janine Marchessault, Jussi Parikka, WJT Mitchell, Jeffrey Schnapp, and Jonathan Sterne — and I’m honored to be among them (and among the few women). My piece, “Embracing the Formalist Mantle,” is about how McLuhan gave me license to say, “Oh, what the hell — I guess I’m a formalist!”

I keep a list on my iPhone of all the current and upcoming exhibitions I want to see. I learn about some of these shows through ads in Artforum or other art magazines, through reviews in the Times or the New Yorker or other periodicals, through blogs, through friends, etc. Sometimes I’m familiar with the artists; sometimes I’m not. Sometimes it’s a photo of the work that piques my interest, sometimes it’s a review or a description in a press release, sometimes it’s the reputation of the gallery, and sometimes it’s merely the exhibition title. More often than not, I don’t know what I’m in for. I’d say my gallery itineraries are 30% predictable; 70% crapshoot.

I consider myself lucky that yesterday’s Chelsea excursion yielded at least a 75% hit rate. Really good stuff. And I’m a little freaked out by the striking similarities between the 15 shows I saw. Of course I gravitate toward any art grappling with language and text and the “aesthetics of administration” and “institutional critique” — but I really can’t explain how nearly every piece I saw yesterday hit all those buttons. Totally weird, and totally awesome.