So this was another tough week. Dammit, love, you jerk. Do you hate me or something?

When matters of the heart get me down, I get my ass to Chelsea. Embraced by those pristinely white walls, comforted by that warm gallery light and that construction-site-meets-parfumery-scented air, delighted or challenged by all the fantastic or awful stuff hanging on the walls and nested in vitrines, I can reassure myself: “Well, at least you guys are still here for me.” TMI, I know. But what’s the use of pretending that my professional endeavors, which are ostensibly the focus of this website, are hermetically sealed off from the rest of my “being”? As if one’s intellectual pursuits are divorced from affect.

I always seem to find, retroactively, a theme for all my gallery tours. Today’s was “reconstruction.” Gee, I wonder why. Aside from my obvious personal motivations for finding messages of “rebuilding” in the work I saw today, most of it actually was, in some way or another, addressing the construction of space and/or meaning — with ink, paint, text, sound, etc.

I started at the Met, at the Chinese “Ink Art” show. I went primarily to see Gu Wenda and Xu Bing, two long-time favorites who play with imaginary and contradictory scripts (and both of whom we studied in the “Textual Form” class I taught at Penn way back in 2002). Here, in Mythos… (above), Gu’s juxtaposing the characters zheng and fan, which can mean “correct” and “contrary,” “proper” and “improper,” “front” and “back,” “orthodox” and “unorthodox.” The characters are written backward, and partly obscured by dark figures, furthering the semantic (and graphic) slippage.

In his An Introduction to Square Word Calligraphy, Xu Bing aims instead for clarification: he proposes a writing system in which English words are formed into structures resembling Chinese characters, thereby illuminating the phoenetic and lexigraphic (and ideographic) aspects of Chinese writing. Nearby was the type used for his Book from the Sky, the piece I had most eagerly anticipated seeing. This hand-carved type is based on Ming dynasty interpretations of a Song dynasty printing style — but despite their authentic appearance, they’re completely nonsensical; all the characters are inventions. I love this guy!! 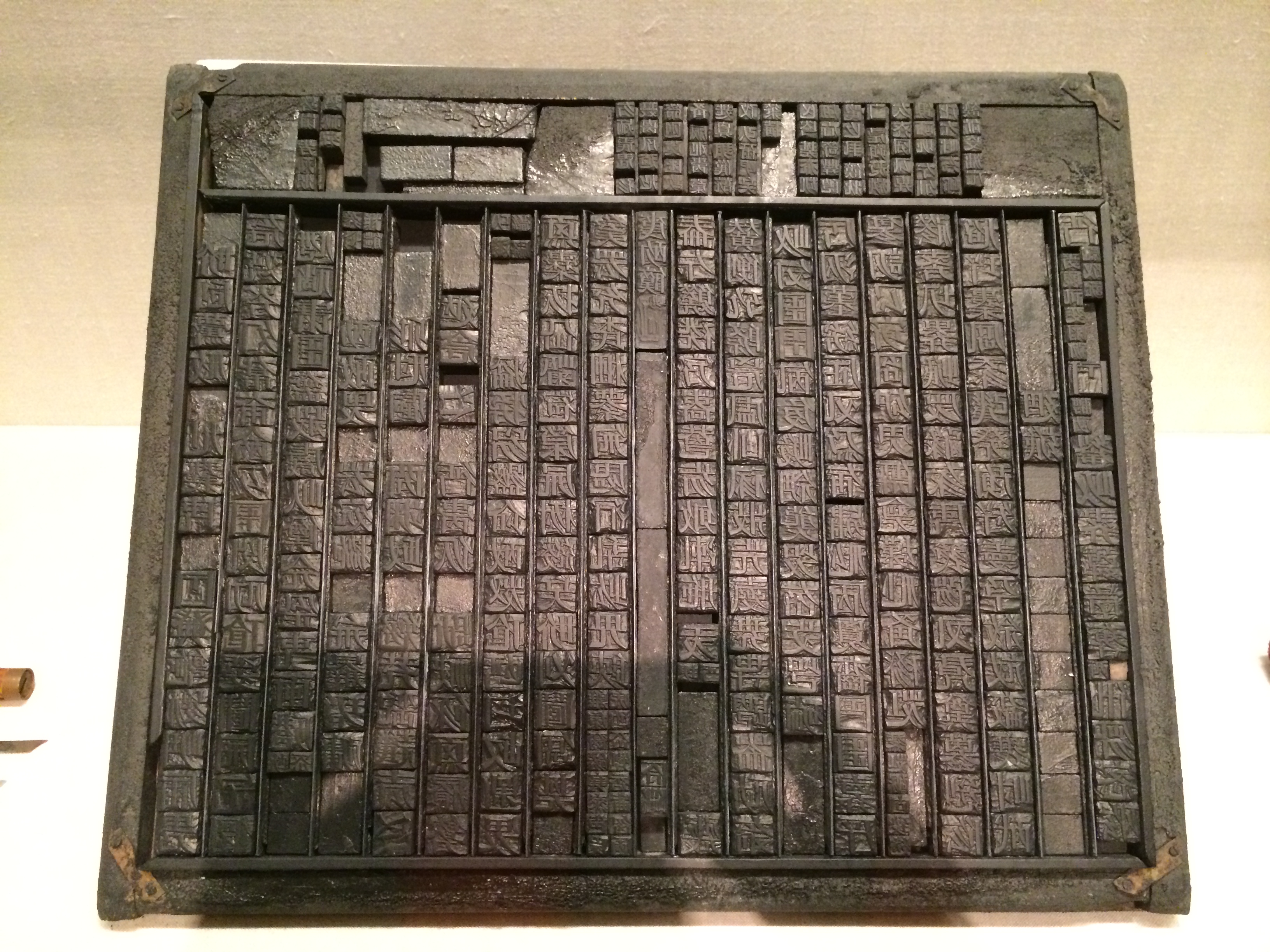 And here it is: Book from the Sky, “an environment that immerses the viewer in a sea of imaginary words.” I am so enchanted by the idea of being enveloped in nonsense — such beautiful deception.

I made an exciting new discovery at the show, too: Qui Zhijie, whose work — at least Writing the ‘Orchid Pavilion Preface’ One Thousand Times on display here — echoed Glenn Ligon or Nina Papaconstantinou.

And then the highlight of the afternoon — of the past several months, really — was William Kentridge’s The Refusal of Time — the best thing I saw since, well, Kentridge’s show at Marian Goodman early last fall. I’m strongly opposed to a “Great Man Theory” of anything, and I take issue with the notion of individual genius — but if anybody’s a genius in my book, it’s Kentridge. He and Ann Hamilton. He’s one of the few artists I’ve ever heard speak about his work — I was fortunate to participate in a small seminar with him at the Whitney about a decade ago, and I’ve seen lots of other interviews — in a way that simultaneously demystifies and enchants; that illuminates, even if that “illumination” involves the revelation of a cloudy politics, or an intentionally ambiguous conceptual foundation, or a dark and heavy political undercurrent. Most times, after hearing artists talk about their work, I’m actually less interested in what they’re doing. Kentridge is simply effing smart and well read and curious; he’s a scholar, but an extraordinarily inventive one – one who’s capable of exploring highly complex and fraught topics in compelling and captivating forms. 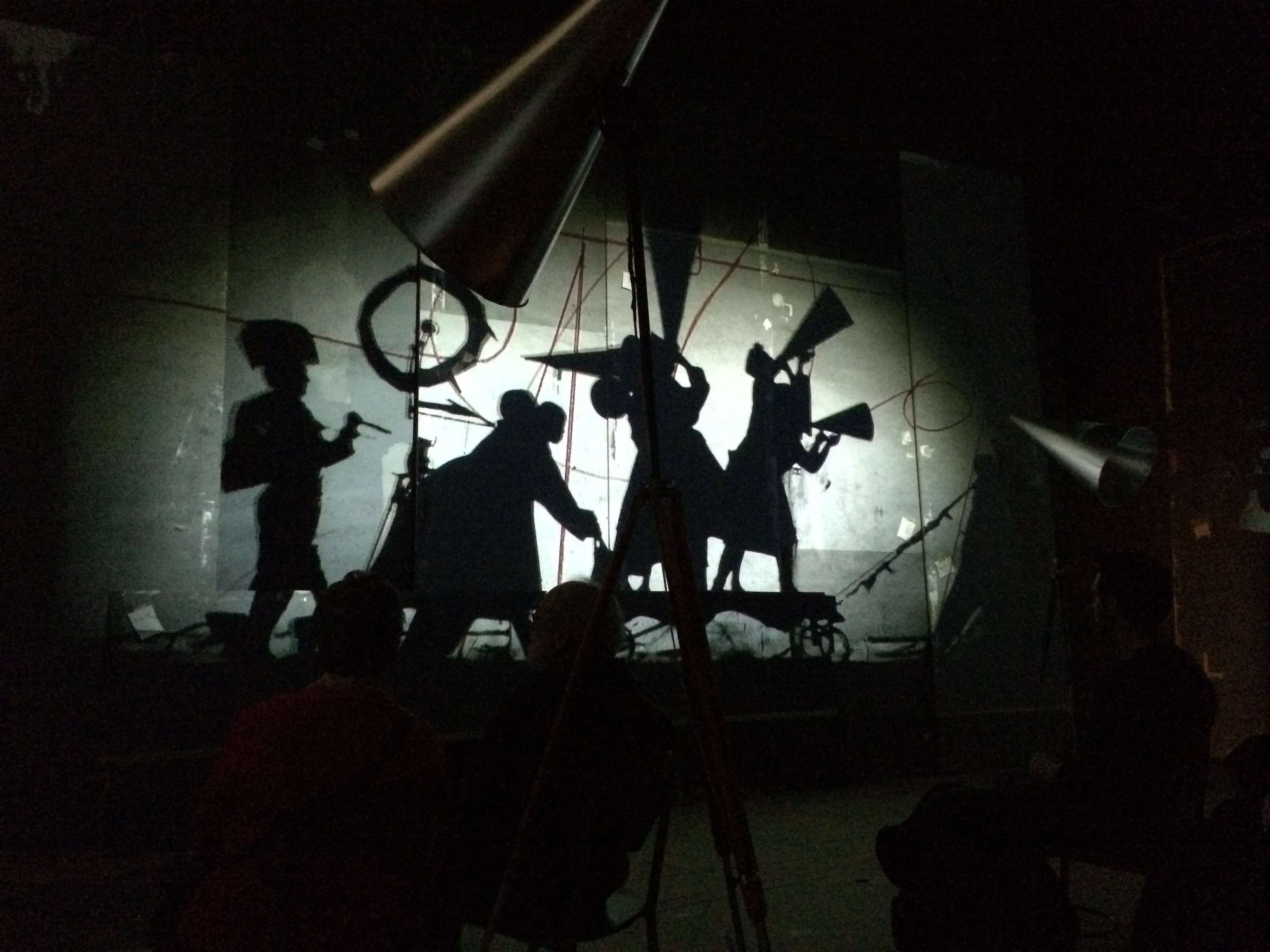 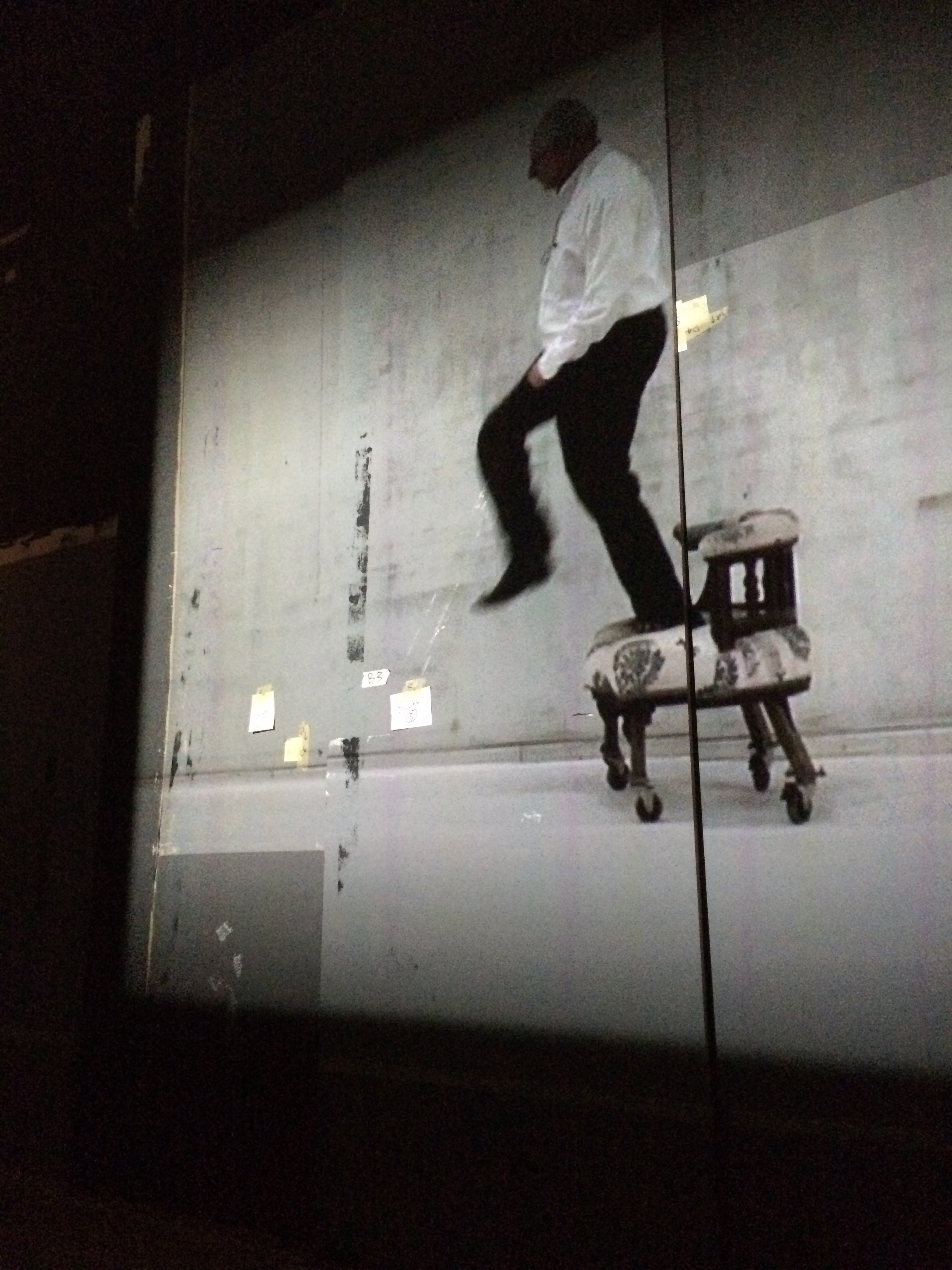 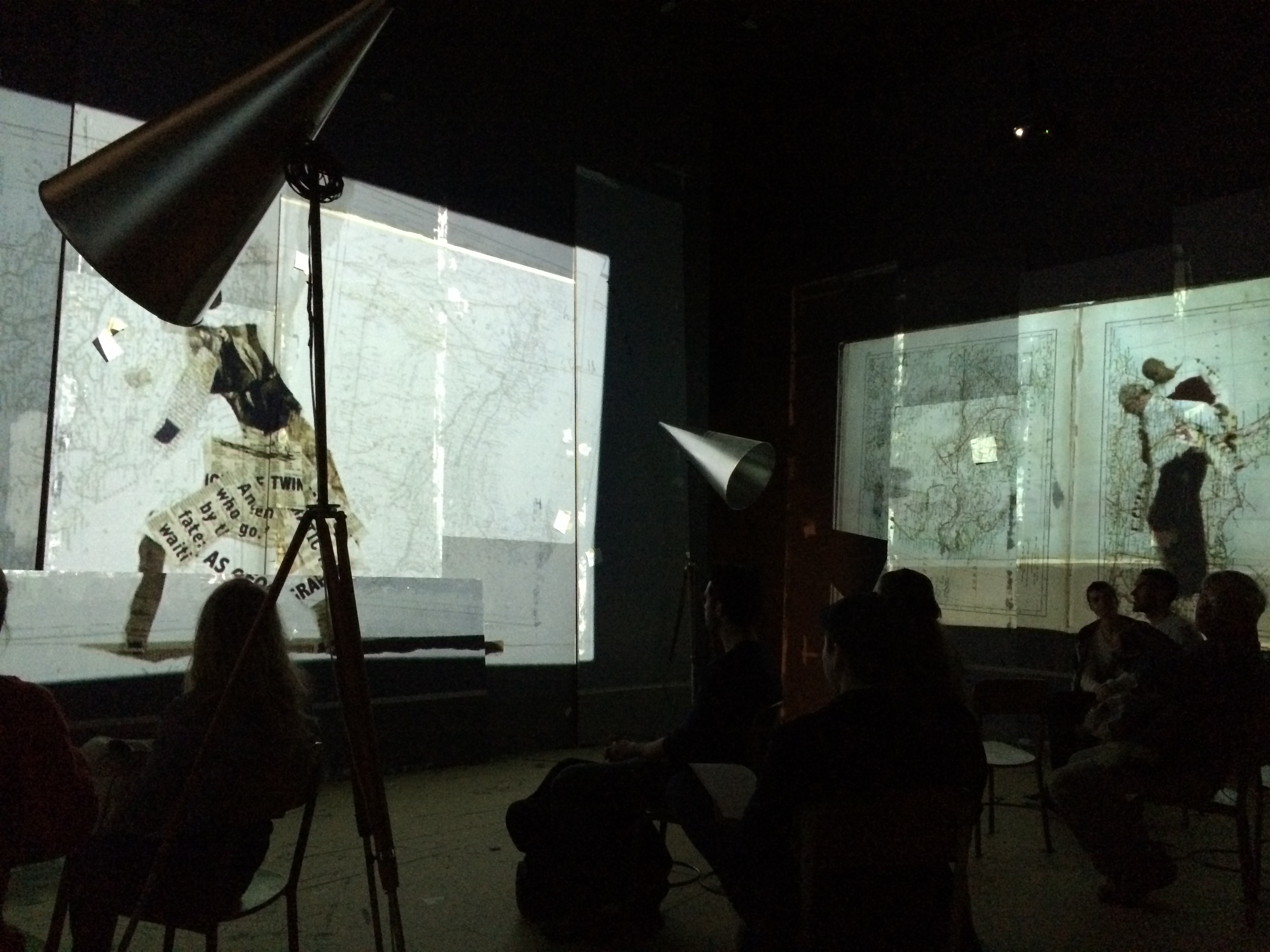 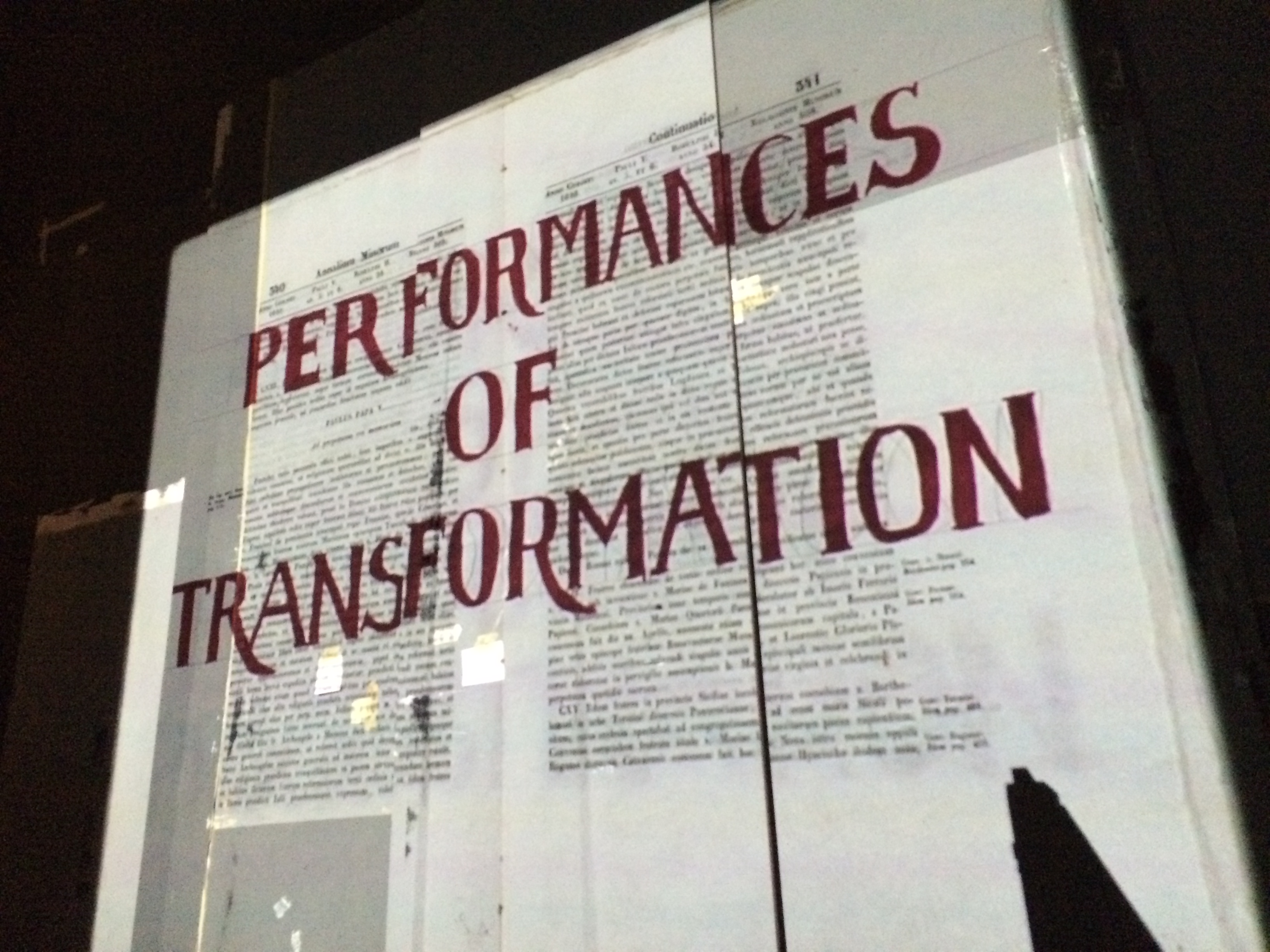 The Refusal of Time is, of course, about time — its “constructedness,” its organic-ness, its relativity. In the five channel video — projected onto roughed-up drywall panels propped against the walls — we see metronomes and clocks and marching bands and spinning Duchampian bicycle wheels and scraps of paper blowing into mutable forms, and characters engaging in repeated motions (e.g., Kentridge repeatedly stepping over chairs, or playing musical-chairs-like games with companions). At the center of the gallery is a chiaroscuro’d pneumatic “generator,” which seems to give breath and rhythm to the entire installation. 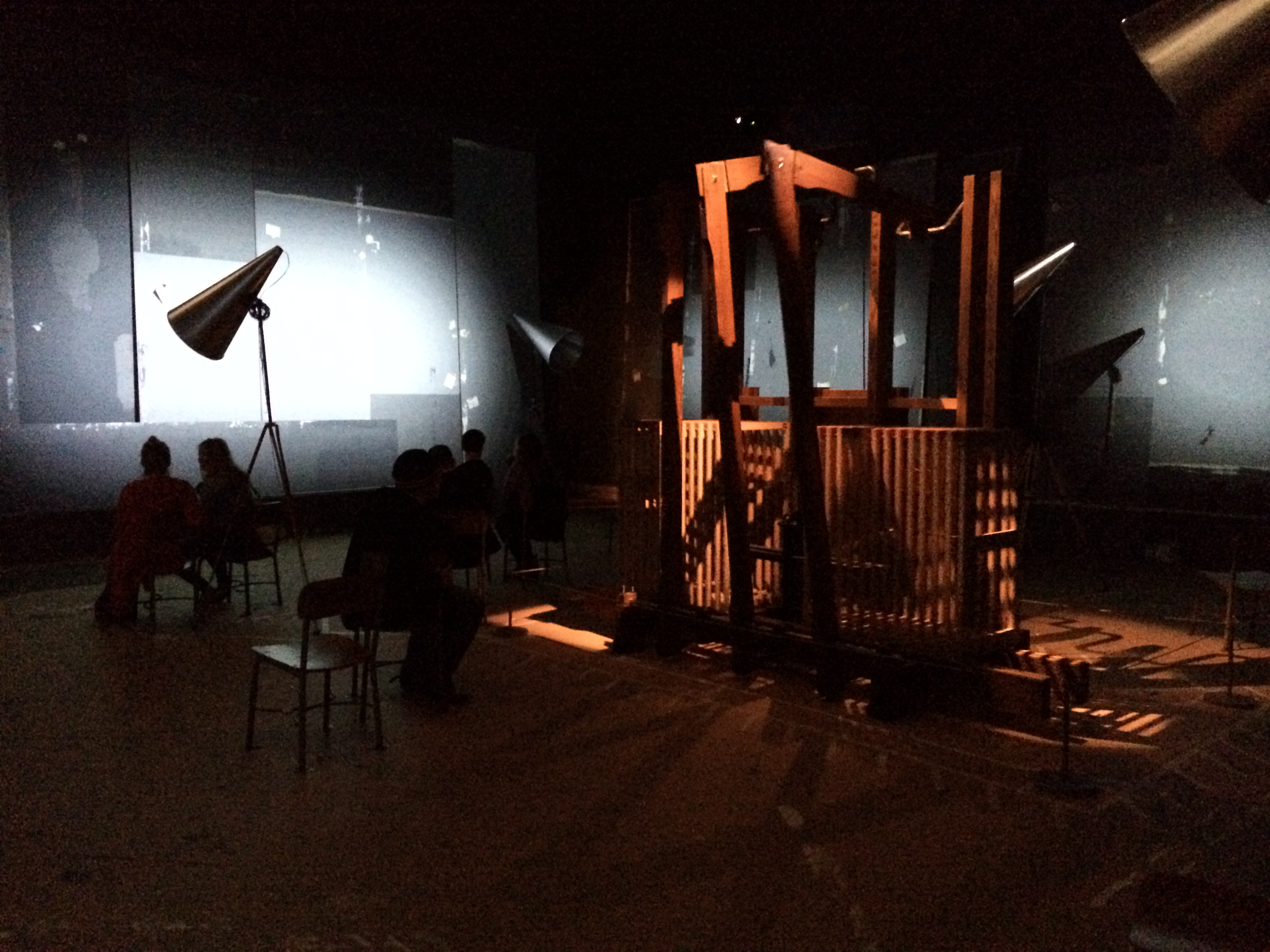 Acknowledging time’s relationship to space, the video also depicts maps and globes and trace-routes and settings, like the Royal Observatory, where important acts of exploration took place. Space is also present here, as it is in most of Kentridge’s work, in allusions to colonialism and apartheid. His work grapples so deftly and gracefully with such charged politics, but I never experience his work as overtly, heavy-handedly ideological. 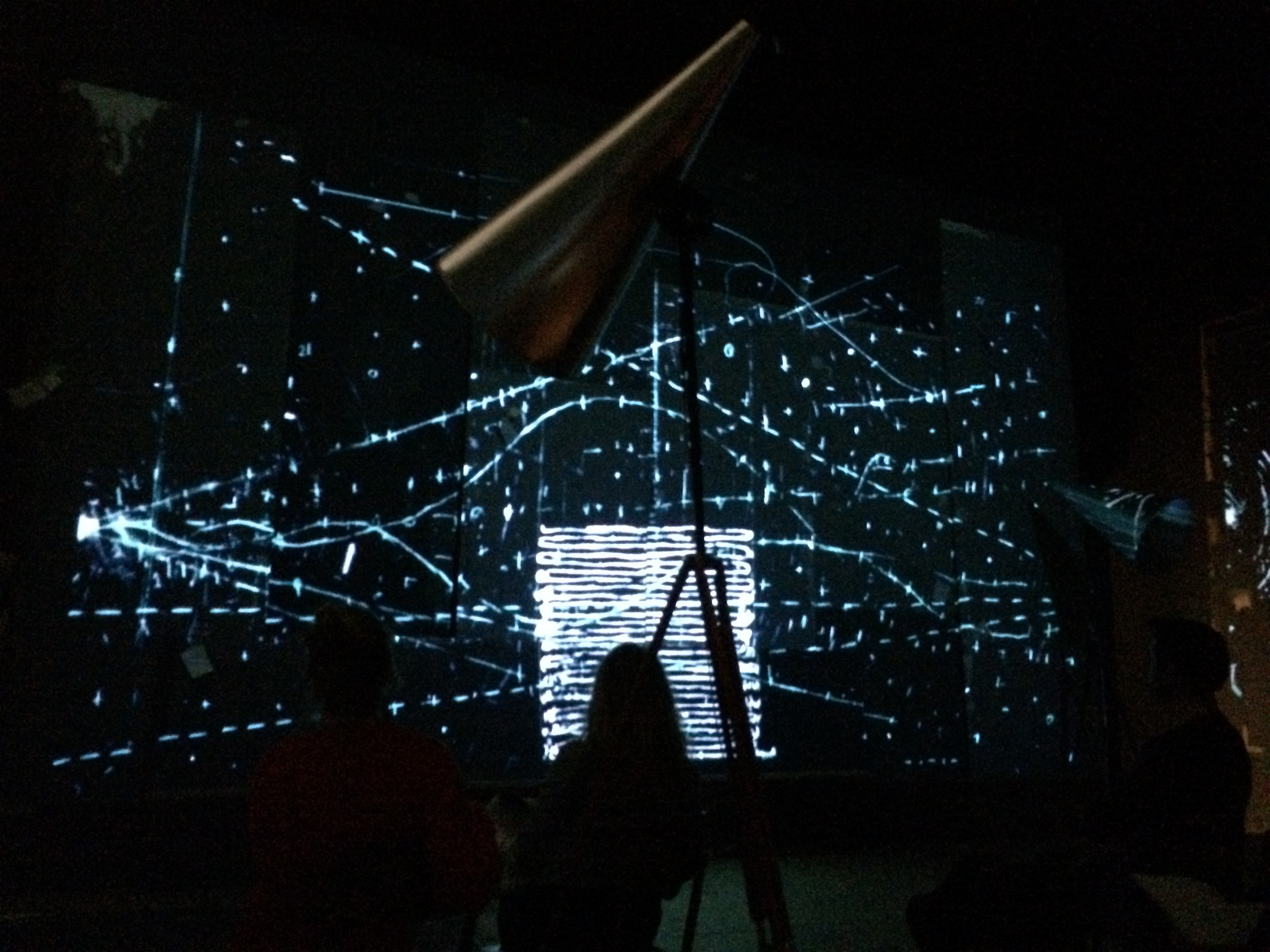 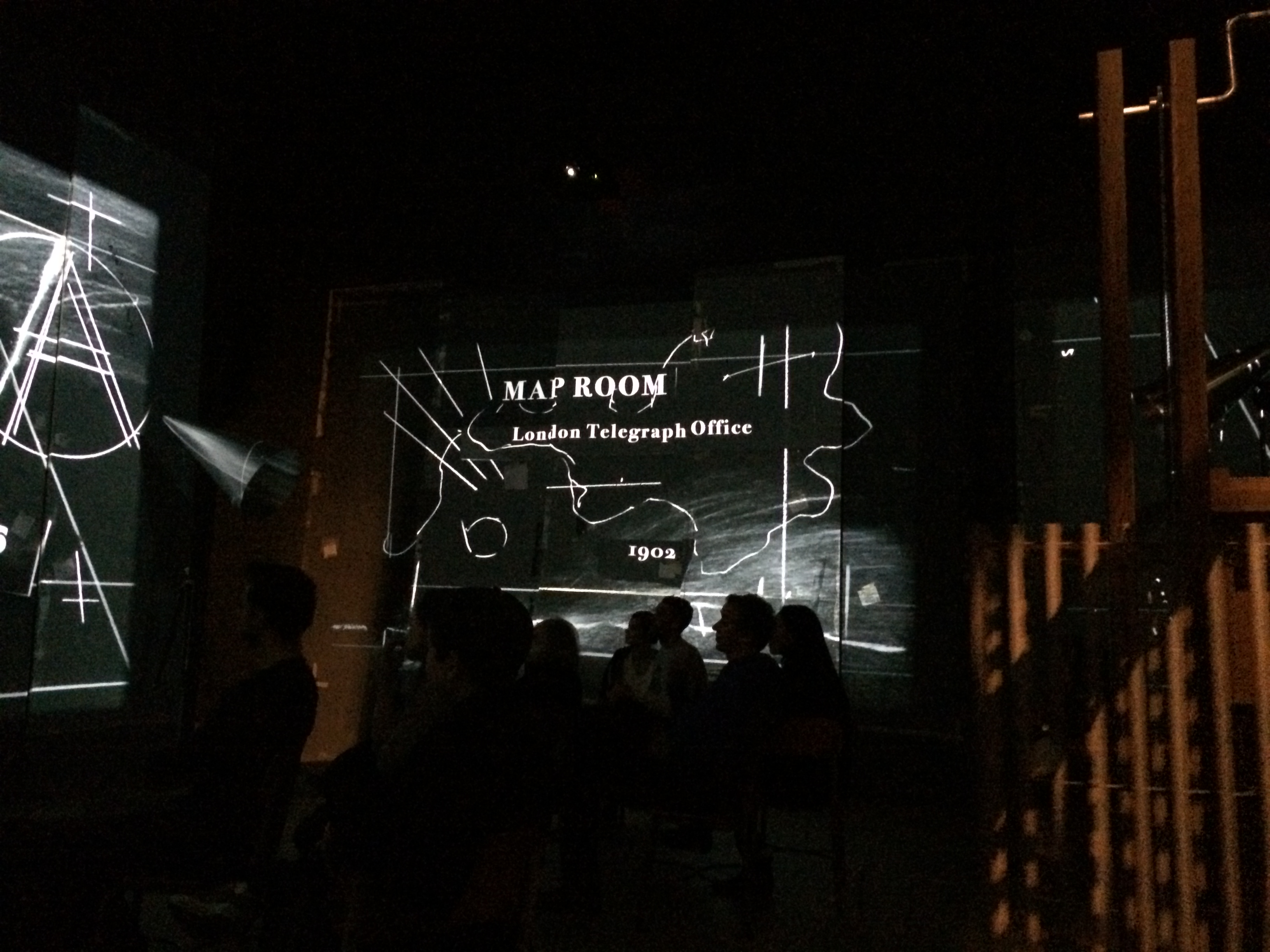 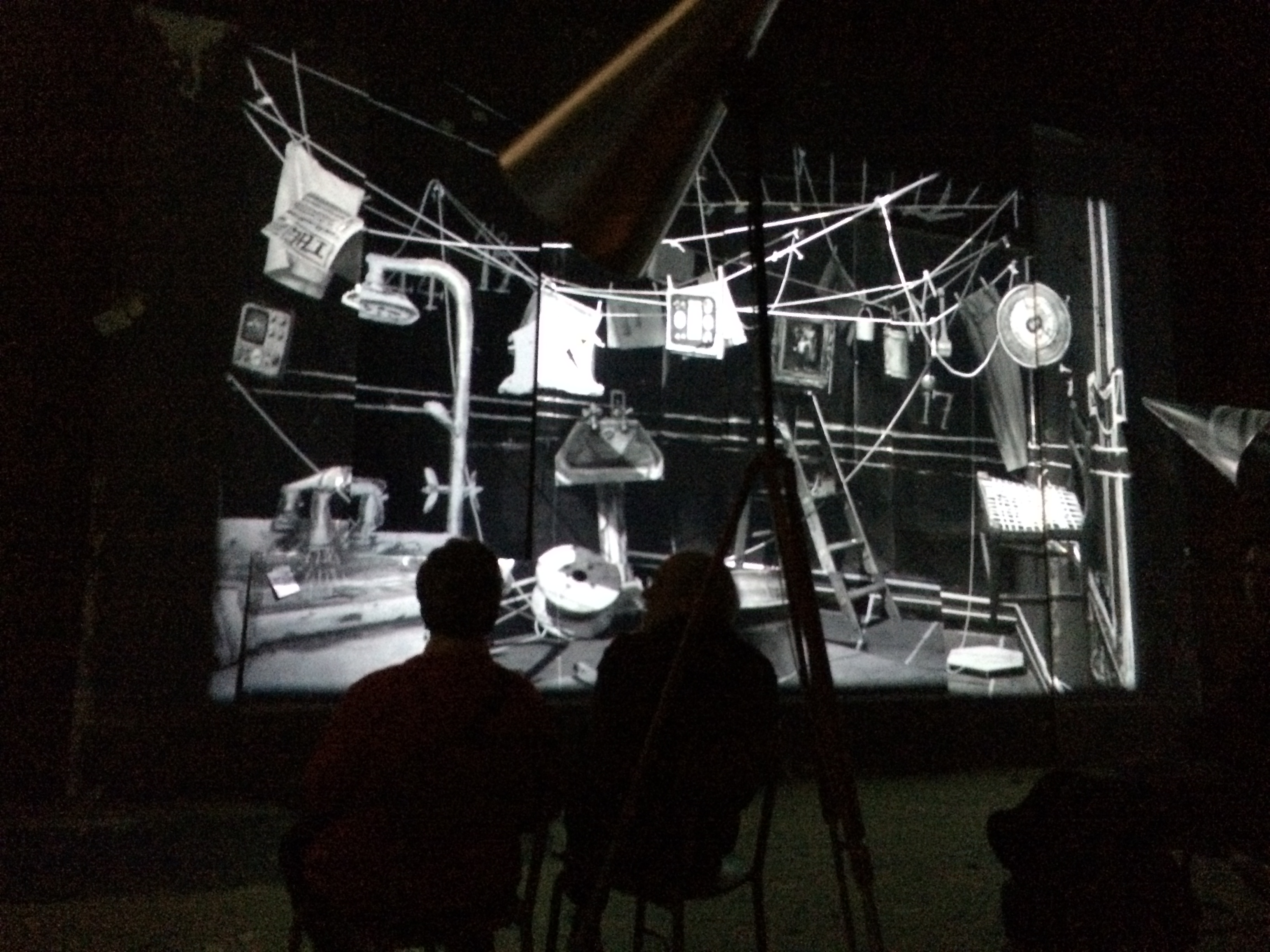 And here, as well as throughout his oeuvre, we sense the role of communication — of material forms of media — in shaping our conceptions of time and space: we see on screen the turning pages of books, the evolution of maps, scrolling dots and dashes resembling Morse code, the swirling arms of optical telegraphs (which, interestingly, few other reviewers seemed to have been able to identify), and Kentridge himself swirling his arms in telegraphic imitation. The mix of media within the installation itself — the video (produced with Catherine Meyburgh); the tactile, tuba-heavy soundscape (produced by Philip Miller); the choreography and dramaturgy; even the megaphones spread throughout the gallery, from which the sound is broadcast; and the school-like chairs positioned semi-haphazardly, though deliberately, across the floor — materially convey the myriad variables that inform our temporal and spatial orientation. In short, Kentridge engages all the cosmic senses — and all your physical senses — in making you aware of just how disoriented you are. And I, for one, always feel smarter, more liberatingly aware of my own perceptual limitations, after having been thus turned around and disillusioned. 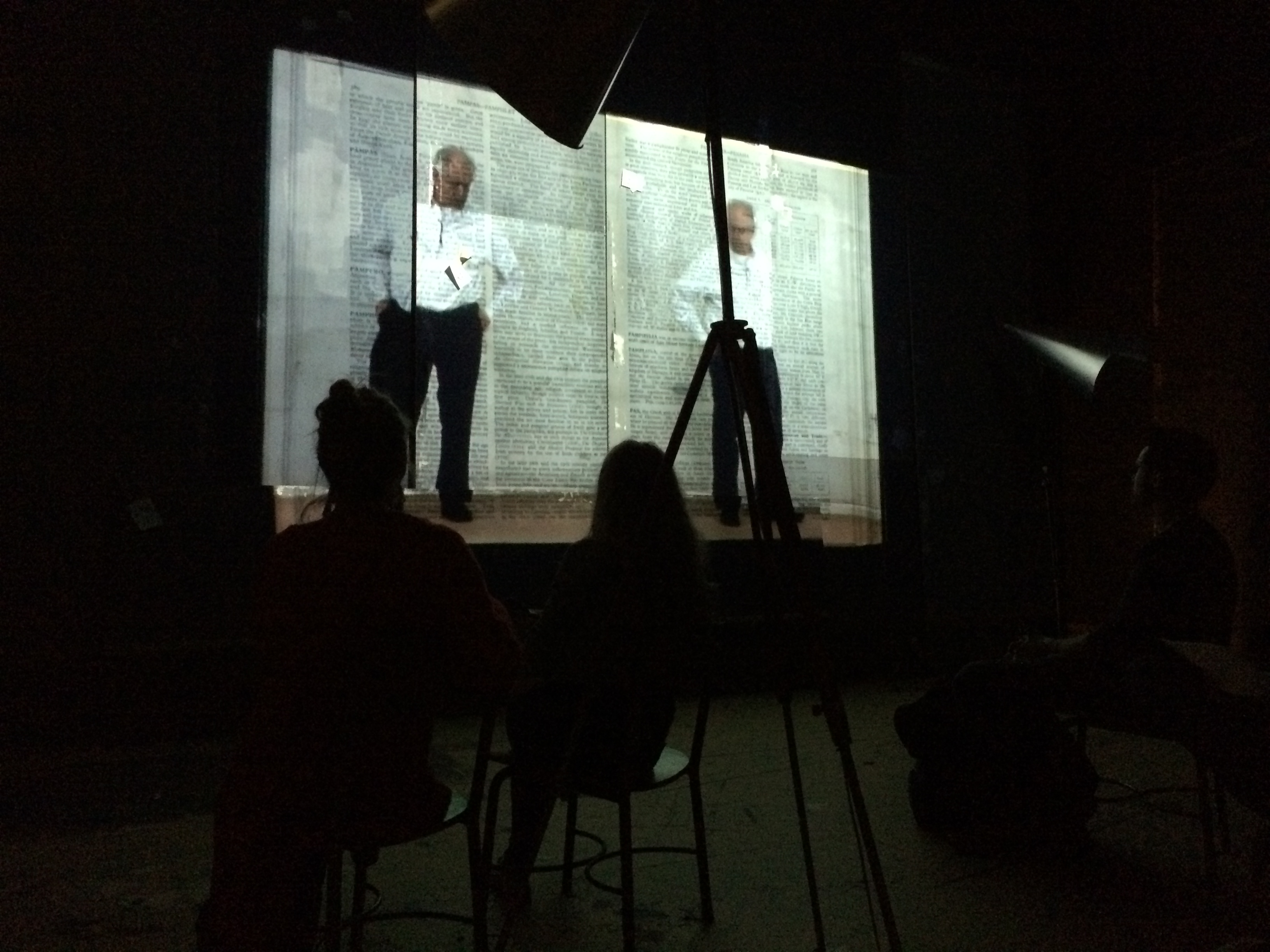 Speaking of books and buildings: after Blum I stopped by the Grolier Club for Selling the Dwelling, an exhibition of 18th, 19th, and 20th-century builders’ guides, pattern books, house plan catalogues, magazines, etc., promoting home ownership. I dedicate a whole day to these publications in my Media and Architecture graduate seminar. 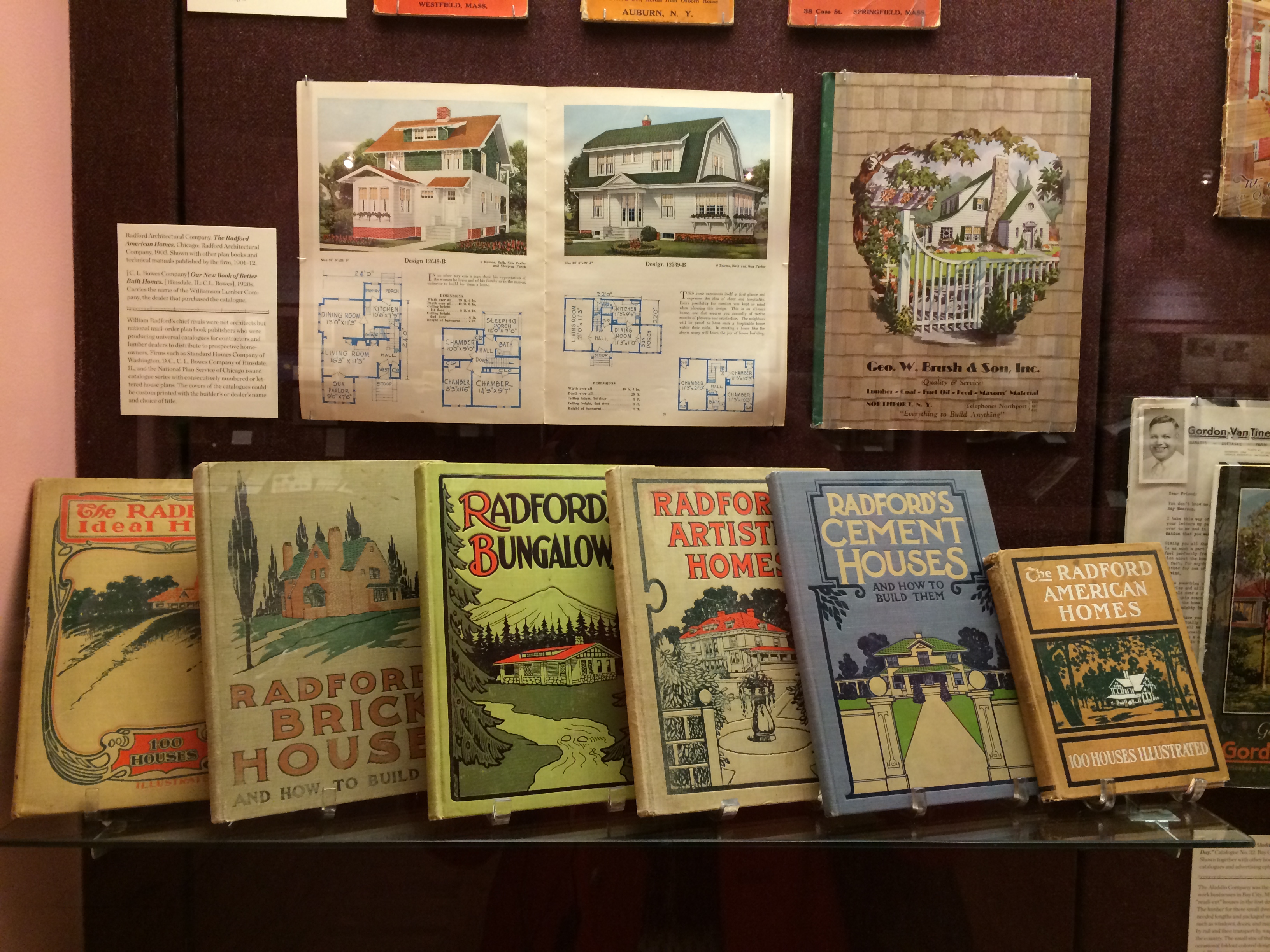 Then on to Chelsea. The Christopher Stott show at George Billis was rather slight, but I couldn’t help but like this little Remington. I’d love to have it hanging above my desk — if only I had a spare $3200. 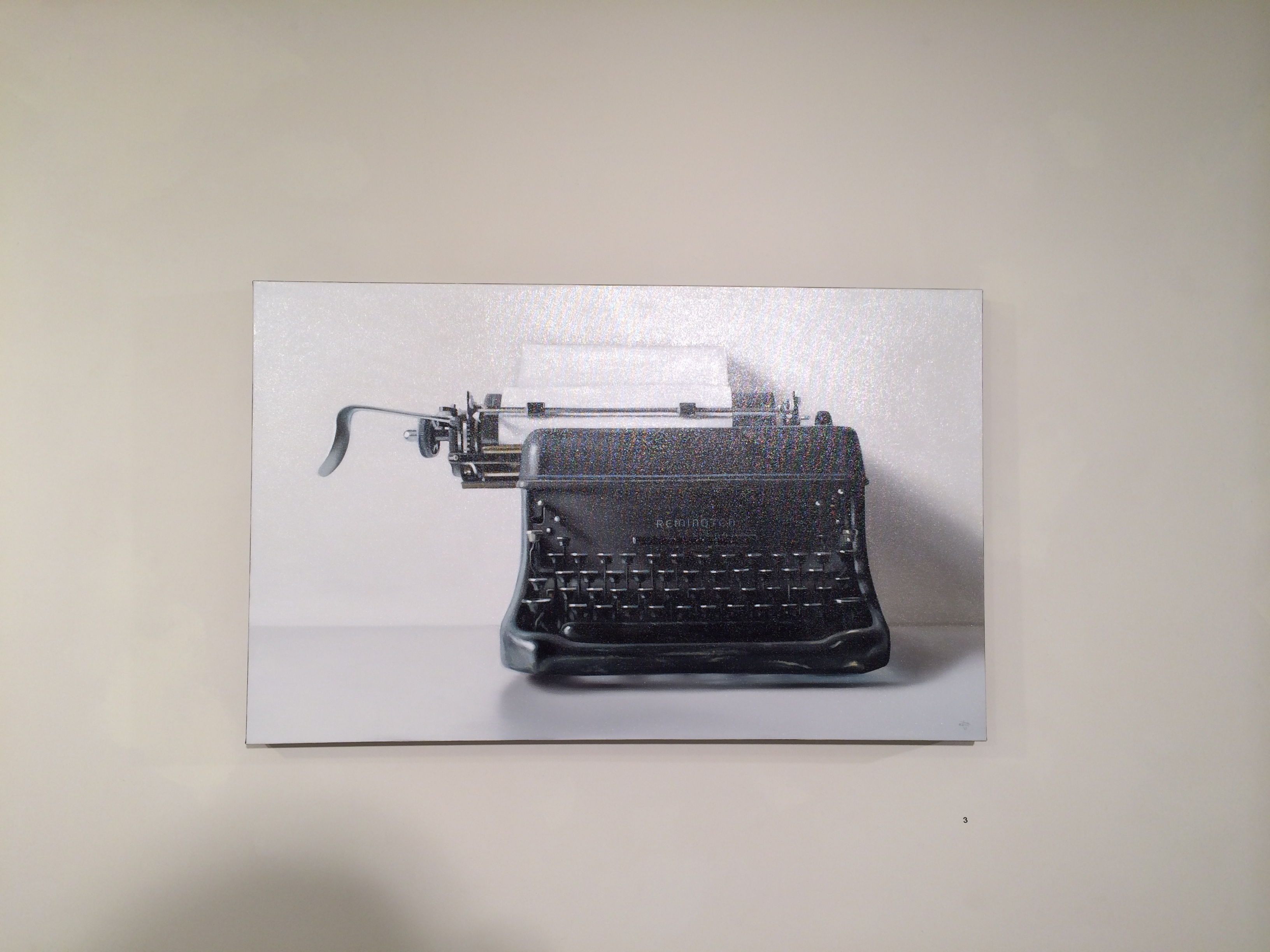 Then to 601 Artspace at the Starrett Lehigh Building for Para-Real, which as you might imagine, “destabilizes the notion of reality.” Of course it does. Destabilization’s (still) all the rage (thanks, post-structuralism!). I quite liked the pairing of Maurizio Cattelan’s “Mini Me” and Sally Smart’s “Pedagogical Puppet (Self-Portrait).” And despite all the Thomas Demand I’ve seen over the years, I’d never noticed that this kitchen piece (below) is called “Ghost,” which is hysterical.

And then, to wrap it up — and to remind me of my own currently fractured, though still sparkly, constitution — David Altmejd’s totally, awesomely weirdo Juices at Andrea Rosen. 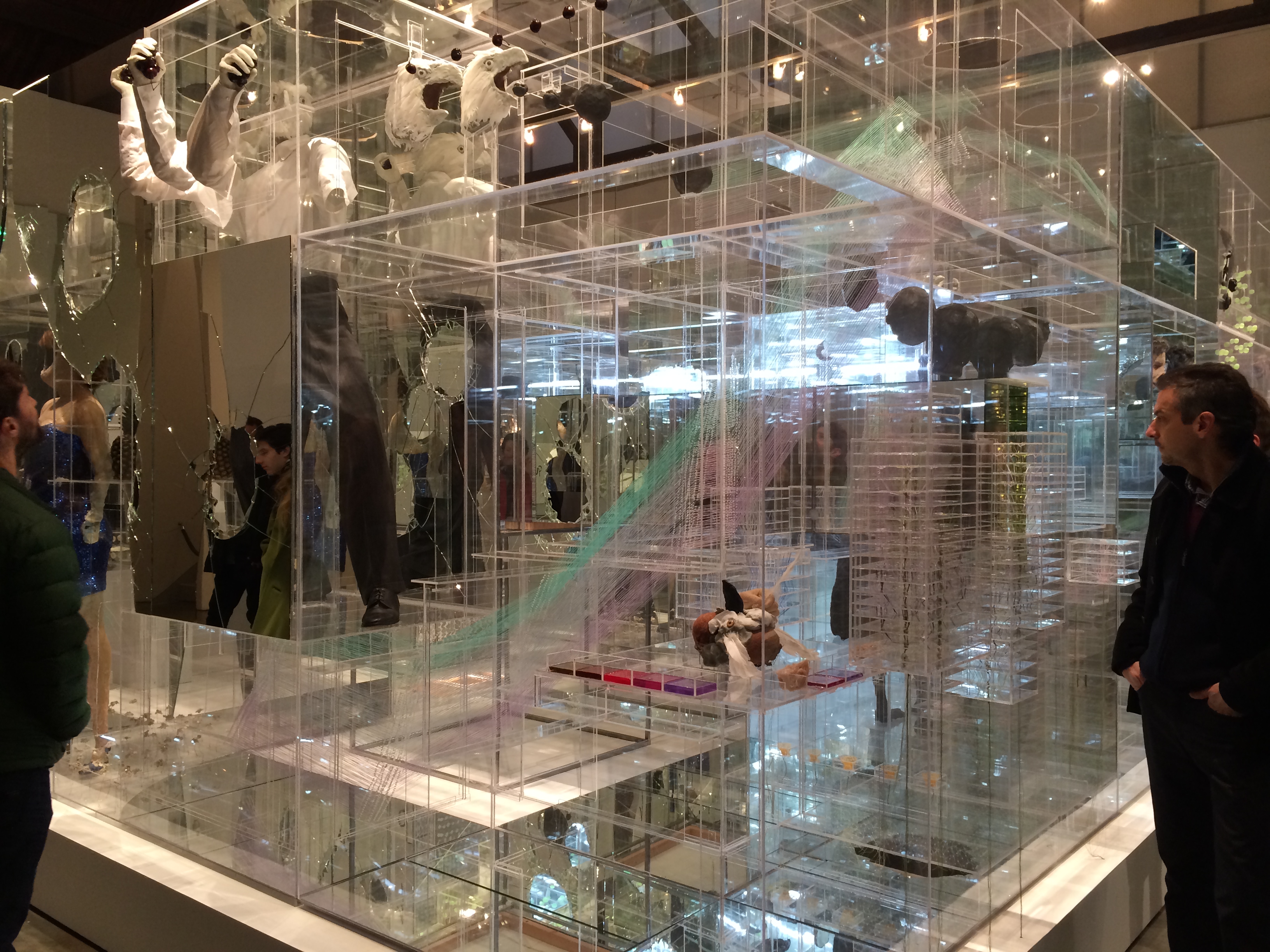 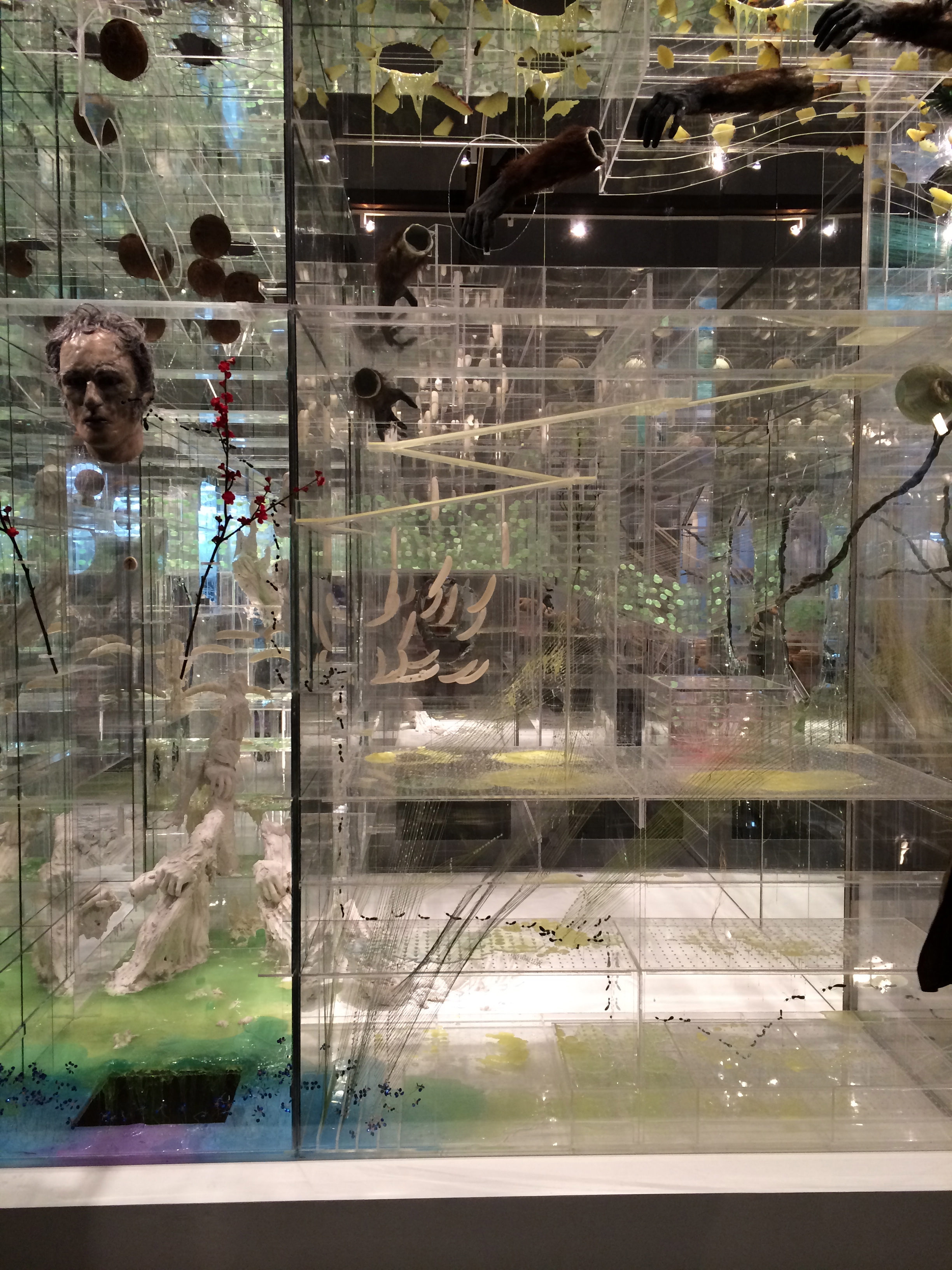 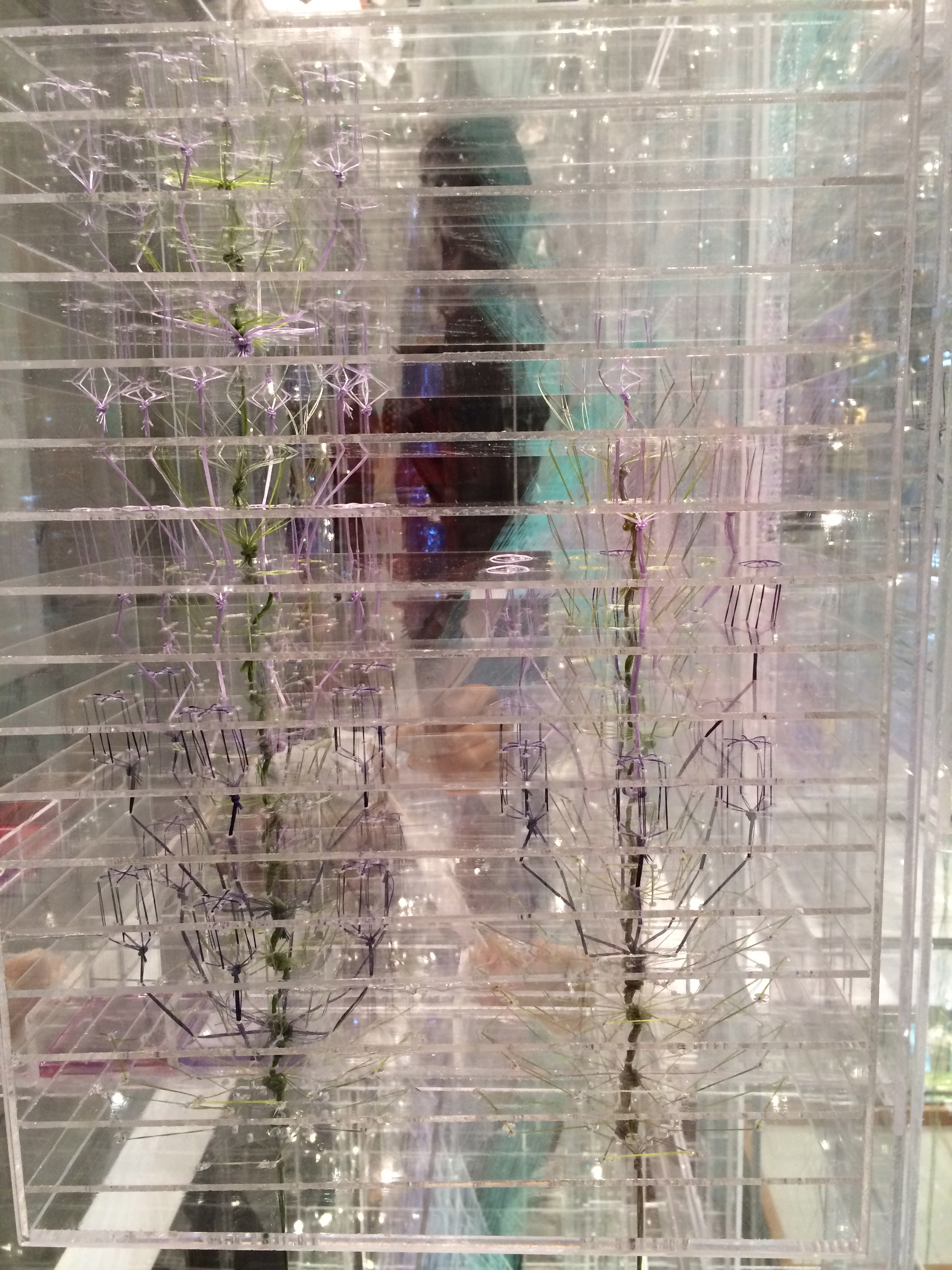 Today’s lesson: we can wire the ol’ heart back together. Build a nice iridescent exoskeleton to help it mend itself. Write ourselves through the heartache. We’ve done it before; we’ll do it again.

Also saw Wade Guyton at Petzel. Eh. Not nearly as interesting as his Whitney show.