Back in December, to celebrate the completion of another semester and all my grading, I saw some art: 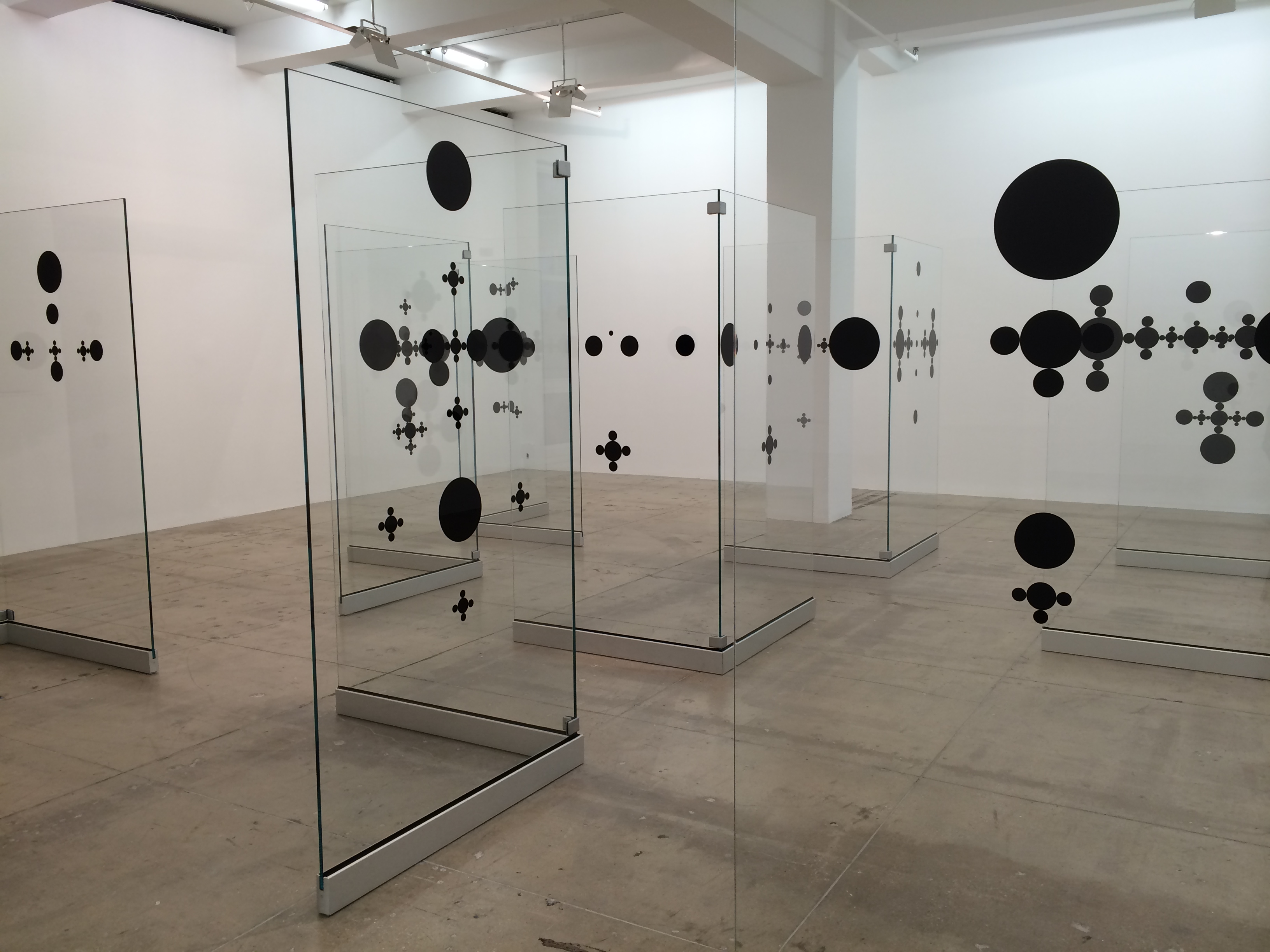 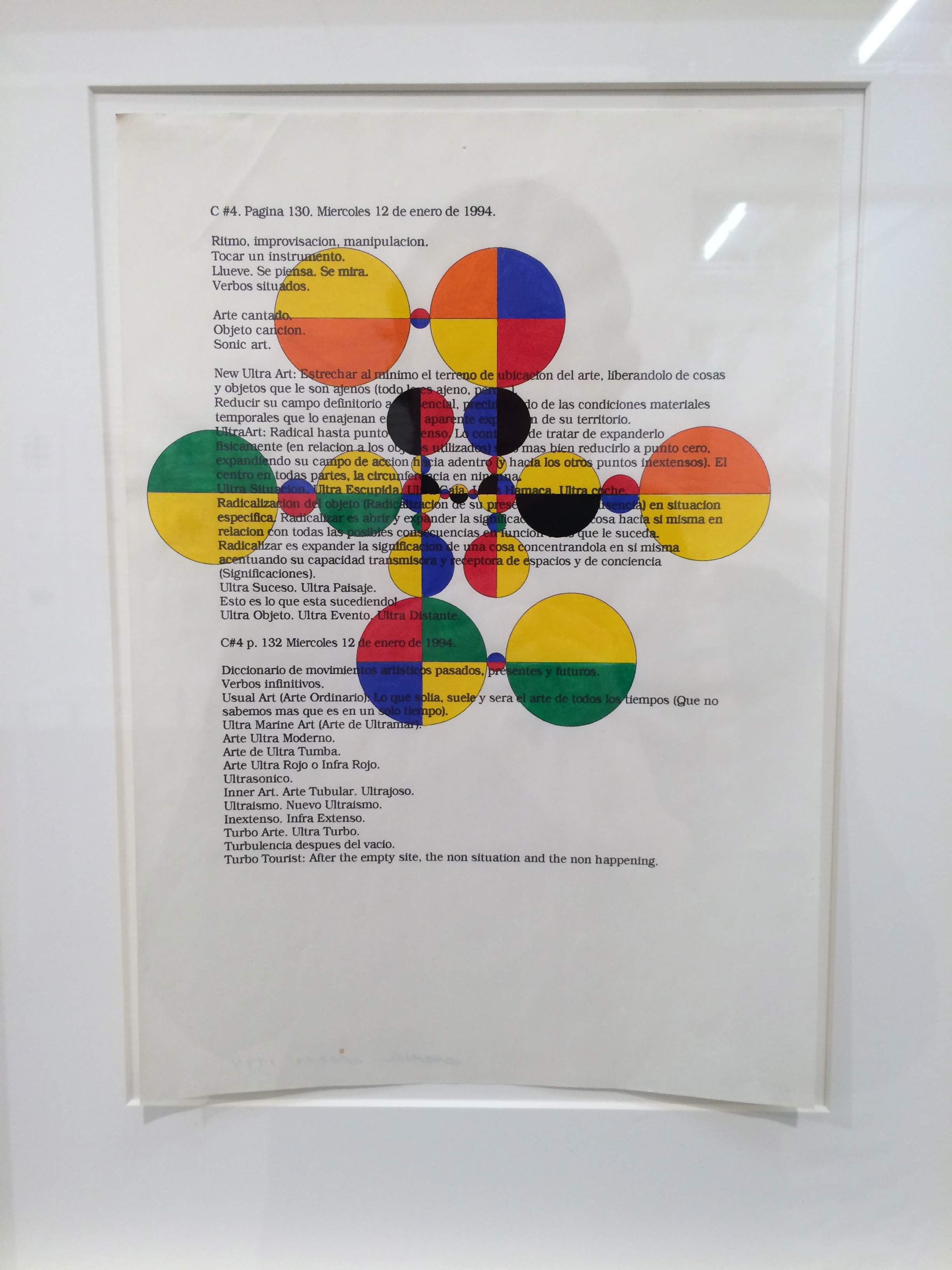 Yamini Nayaer’s “an axe for a wing-bone” at Thomas Erben. Holland Cotter described her work in the Times:

Many of the photographs are of assemblages, often vaguely architectural in form, that she puts together in her studio from scrap materials, photographing the work in progress at various stages, and from different angles once it’s done…. her pictures project us into disorienting interiors. What look like ceilings could be floors; floors could be walls. It’s hard to get a footing and an illusion of damage, possibly in progress, is pervasive.

Ingrid Calame’s “Tracks” at James Cohan, which featured “vibrantly-colored large-scale pounce wall drawing wrapping around all four walls of the… gallery and incorporating tracings of tire tracks from the Indy Speedway” and the floor of the ArcelorMittal Steel factory in Buffalo, NY: 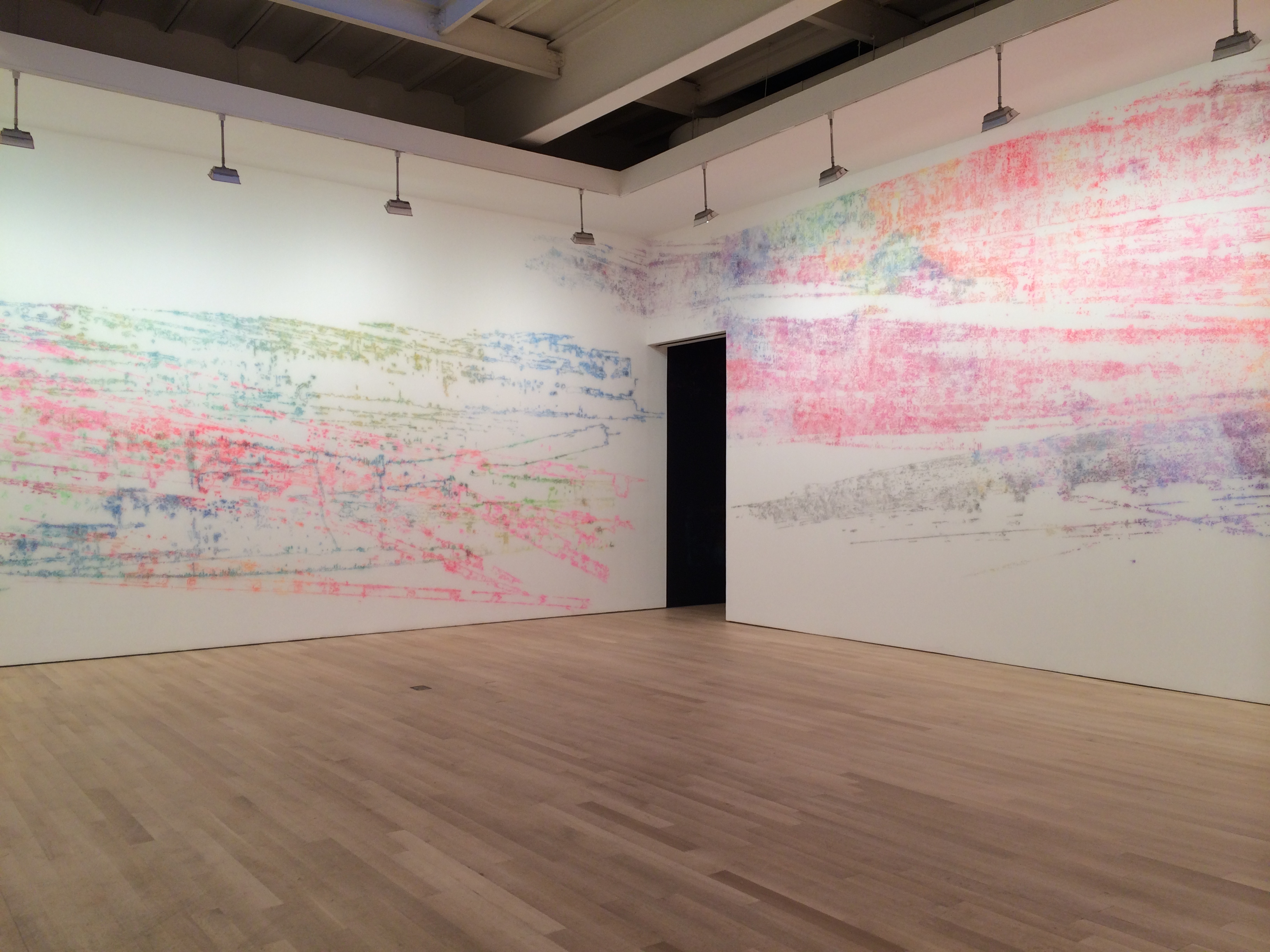 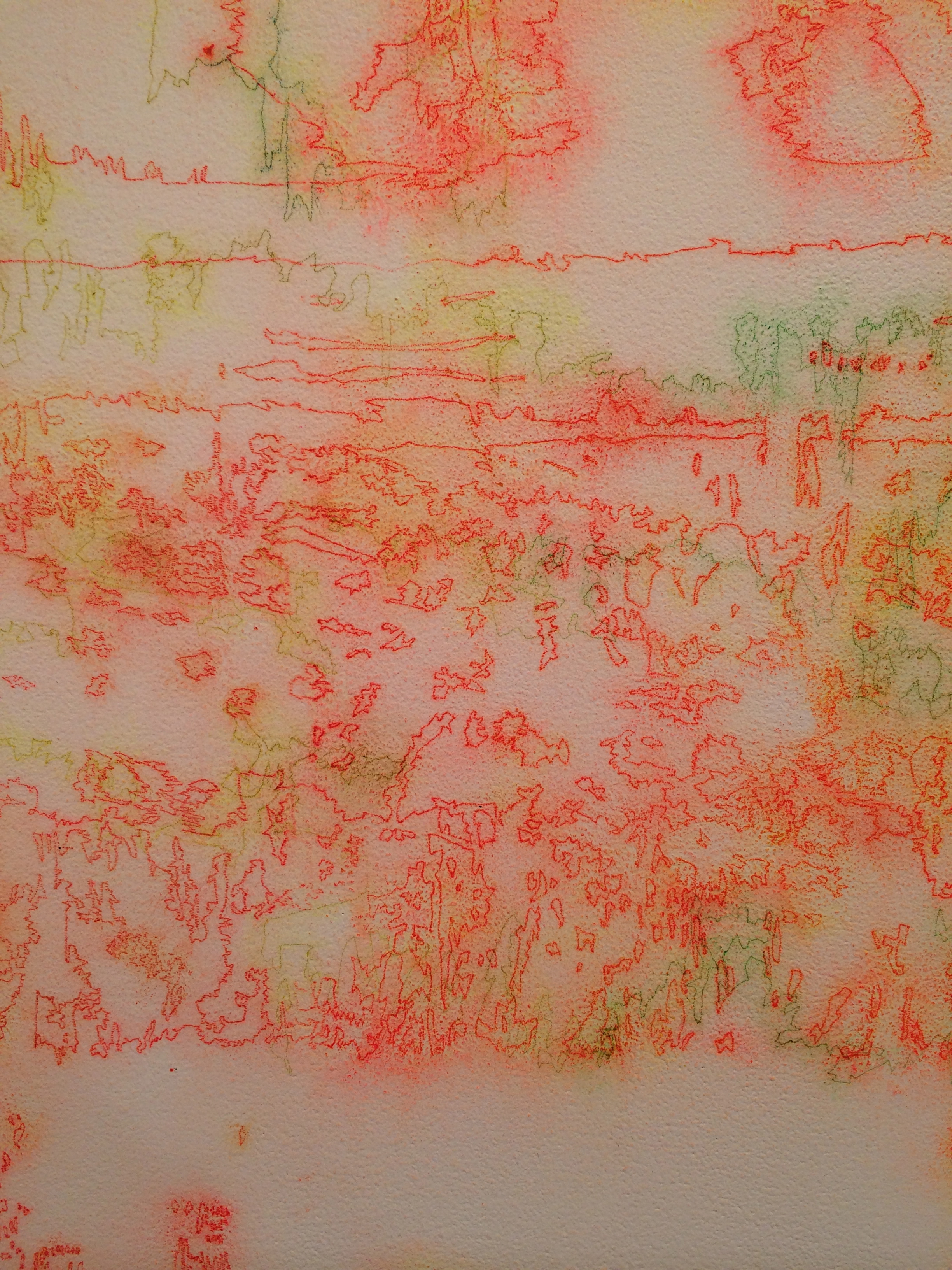 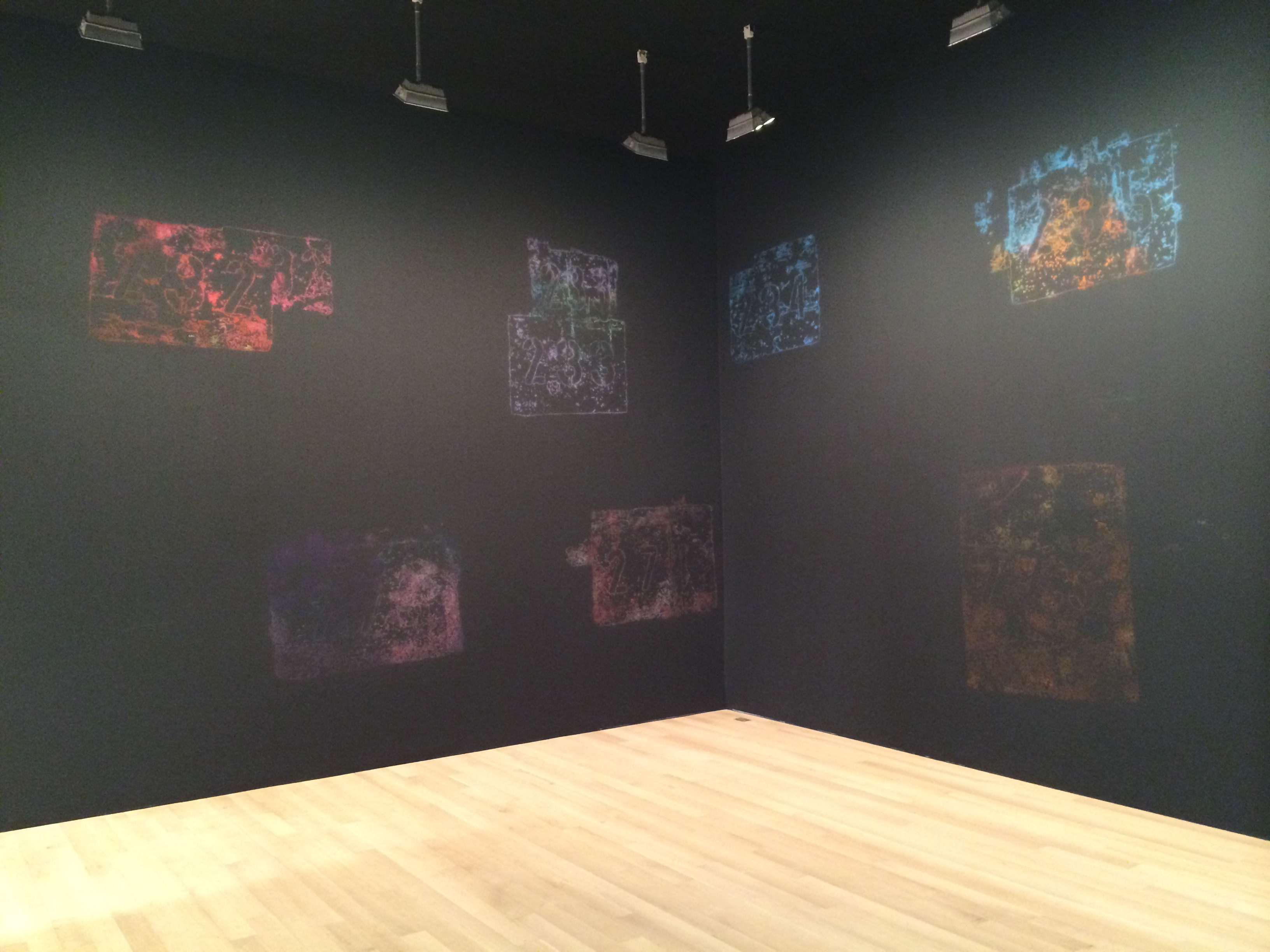 Elaine Reichek’s fantastic “A Précis 1972-1995″ at Zach Feuer, which examined the translations between various forms of handicraft — most associated with women’s work — and design and language. The gallery described the show as follows:

Reichek uses techniques traditionally associated with women’s work, including sewing and knitting, to explore questions of language, culture, and authenticity while also elevating media typically associated with craft into the realm of high art. As her work has changed visually, she has extended the connections her 1970s work made between fabric and feminism to encompass examinations of “the other” in multiple cultures, as well as issues of documentation, the archive, photographic truth, and modernist practice.

Reichek uses a number of formal techniques to encourage the viewer to read and understand objects and images in dimensions beyond their original functions. In one early multipart knitted work, for example, she combines a colored-pencil graph charting the knitting instructions for a pair of infant’s mittens with the mittens themselves; the drawing turns out to have an architectural dimension, resembling a little house. Later works extend this suggested coidentity between dwelling and costume, and the mutability Reichek finds here emphasizes the instability of the sign, and the mind’s capacity to see one thing as something else quite different.

In later work from the 1980s and ‘90s, Reichek extends the associative logic implicit here by deliberately misinterpreting the objects and symbols in photographs—translating structures and figures into knitted objects hung directly on the wall, or adding subjectively chosen color to black-and-white images. A shelter seen in an appropriated ethnographic photograph becomes an abstract knitted sculpture, now collapsed, colored, and hung upside down. The method emphasizes a colonizing culture’s tendency to misinterpret and aestheticize the artifacts it comes across in its travels, and the translation from photographed form to knitted form replicates the way information is passed from language to language and in the process reshaped and altered, its content never quite the same. Working in related ways with ethnographic images of individuals, Reichek undermines the camera’s pretense at conveying their “truth,” which is as absent from the photograph as their bodies are from her flat knitted forms. 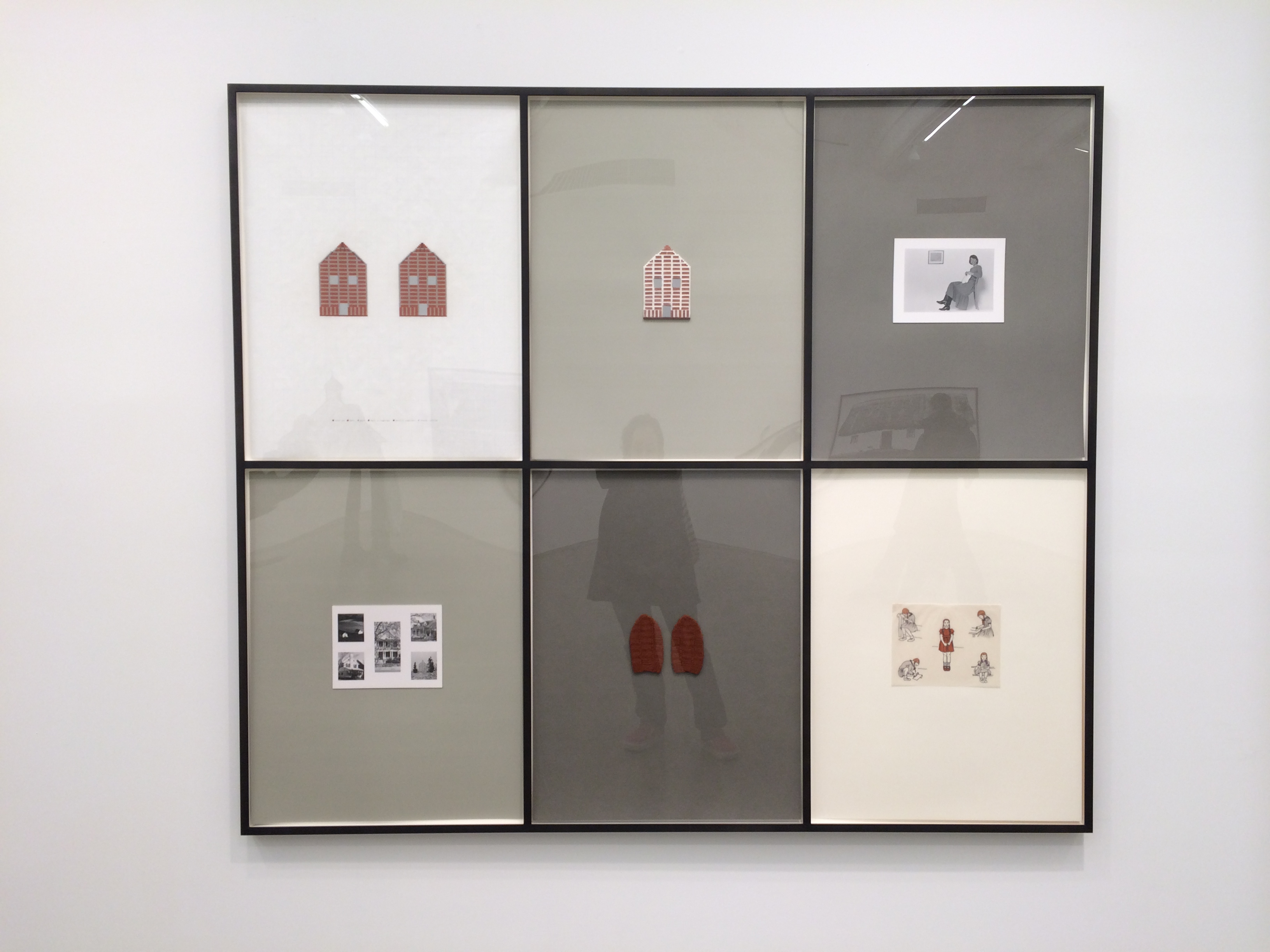 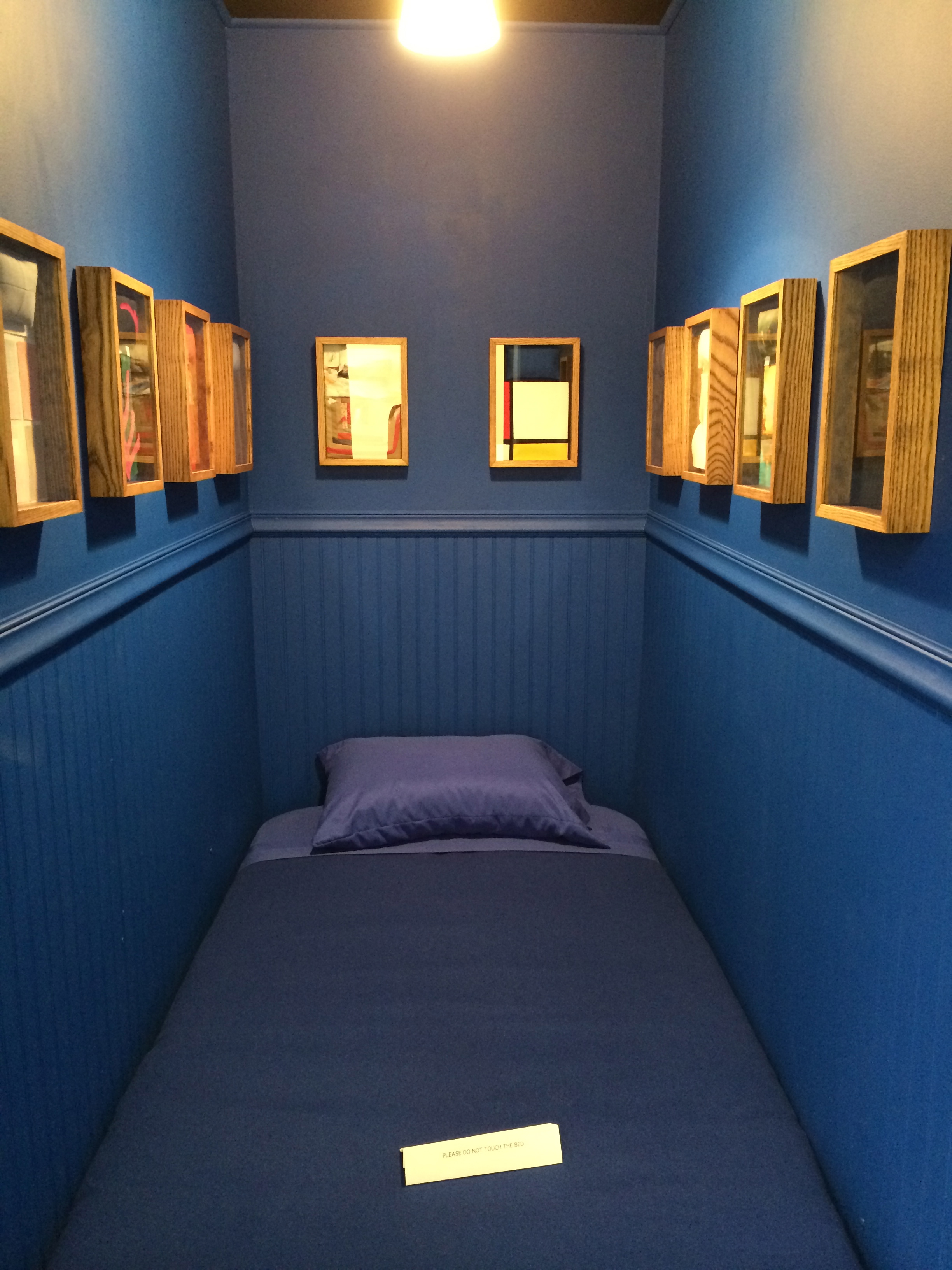 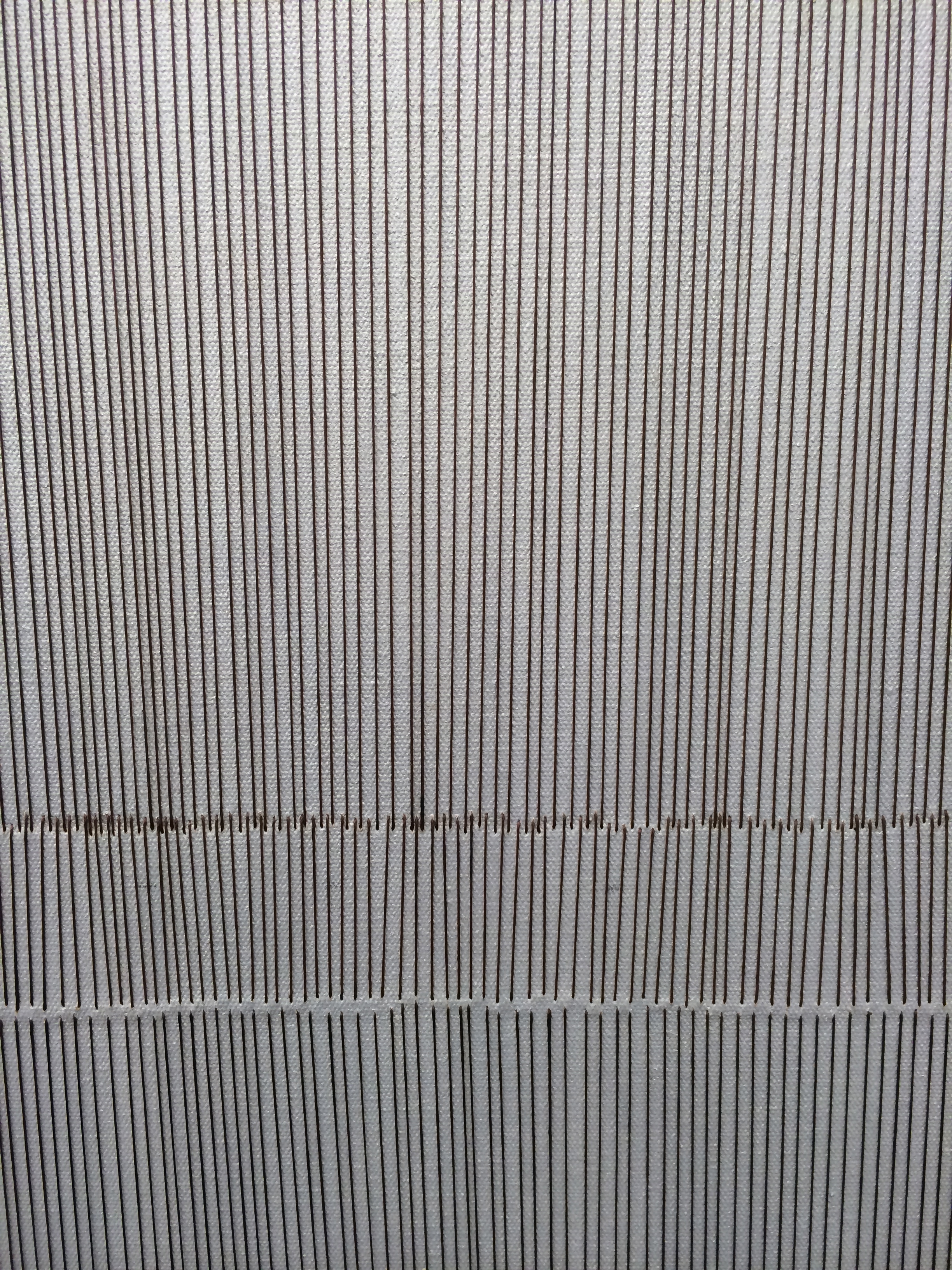 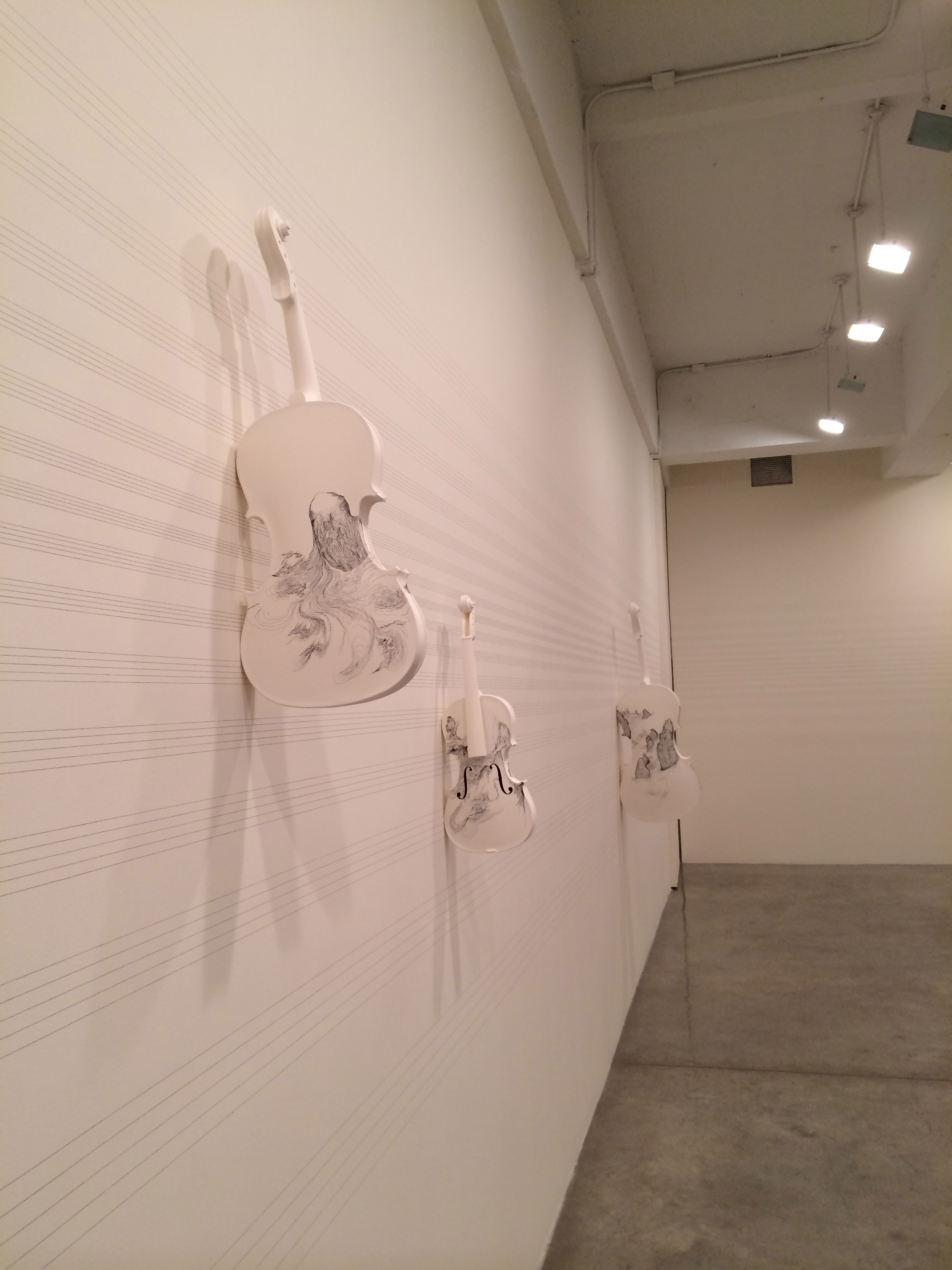 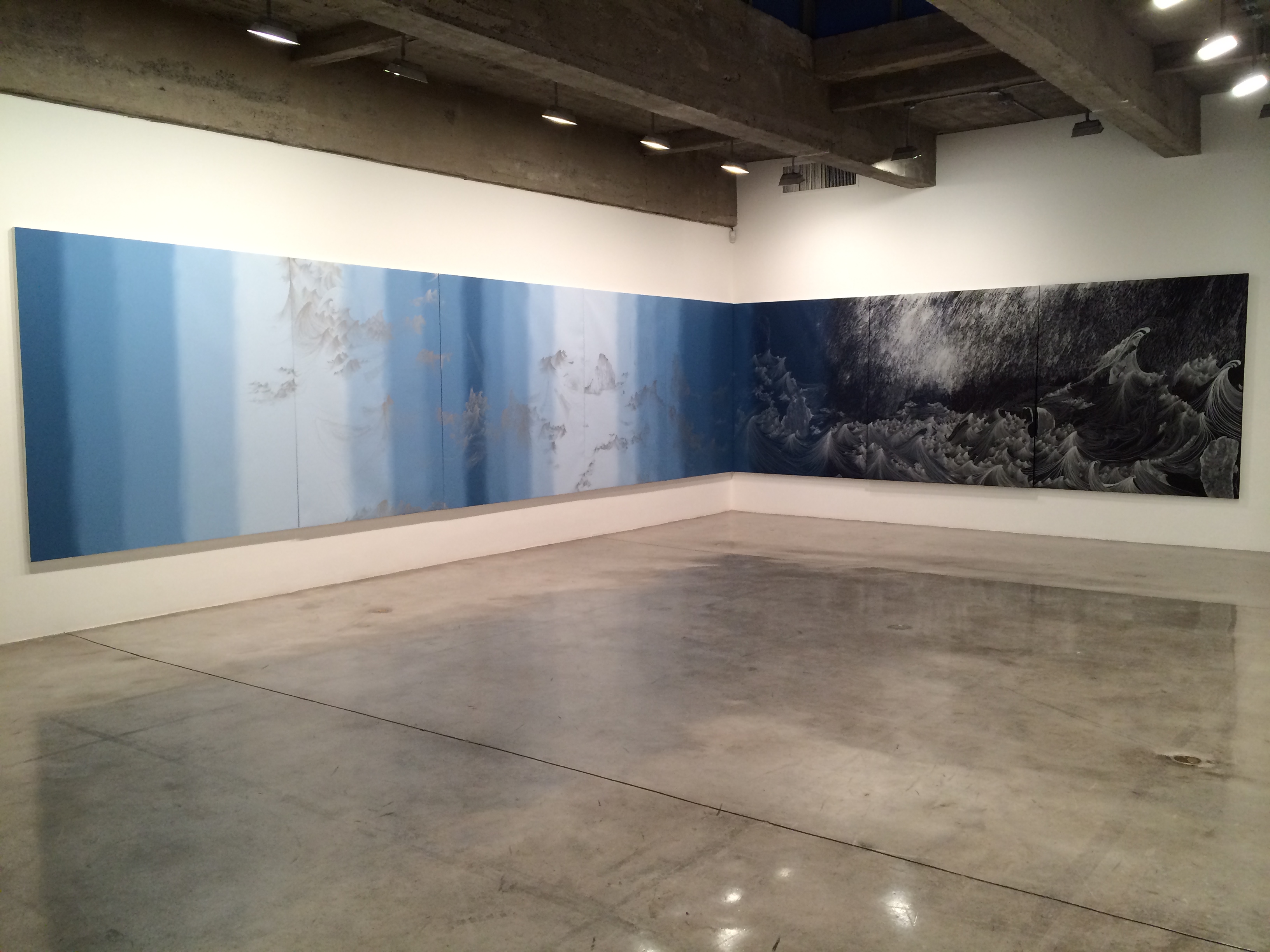 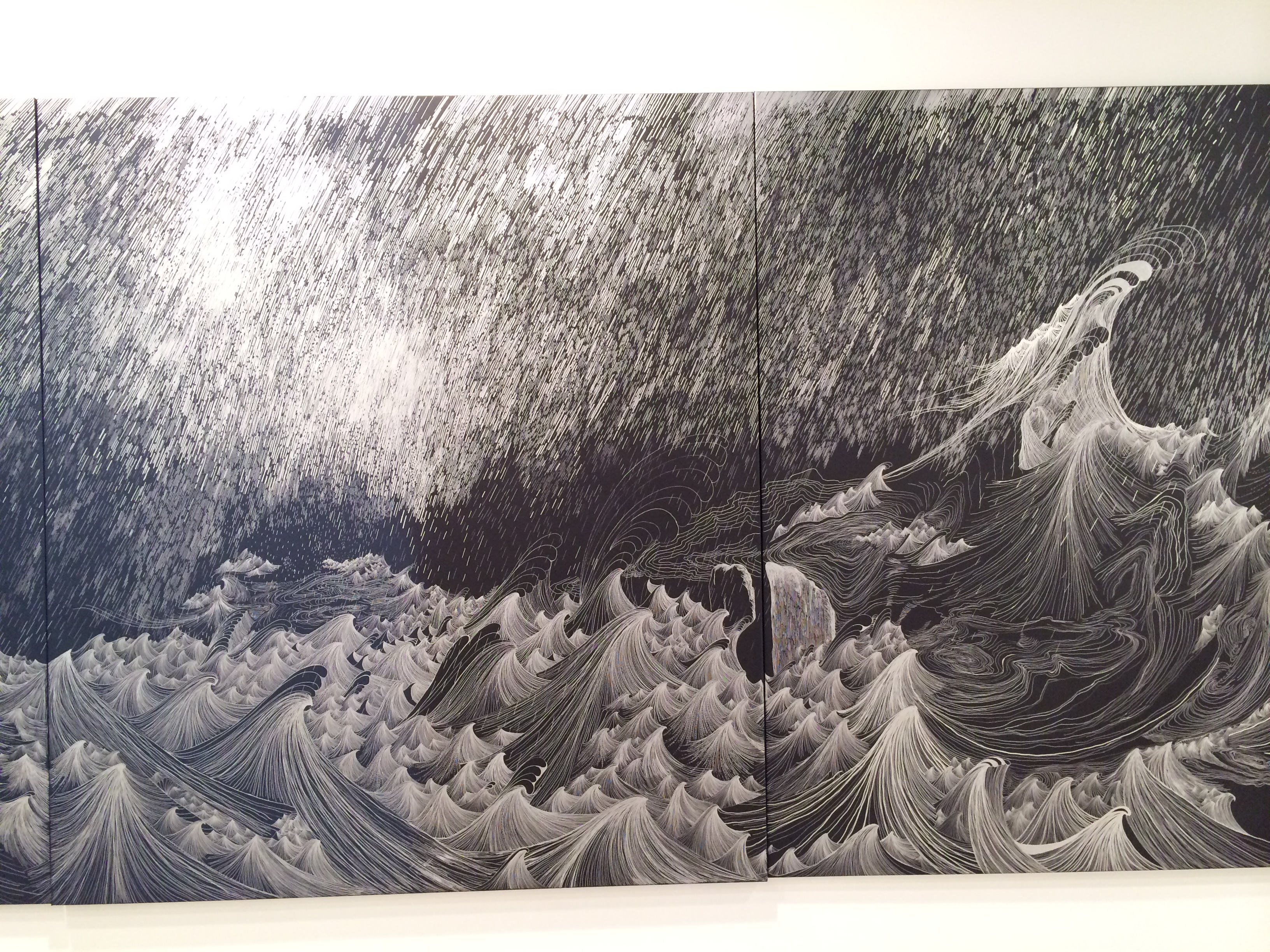 The Emoji show @ Eyebeam, which picked up on some of the languistic and translation themes explored in Reichek’s work: 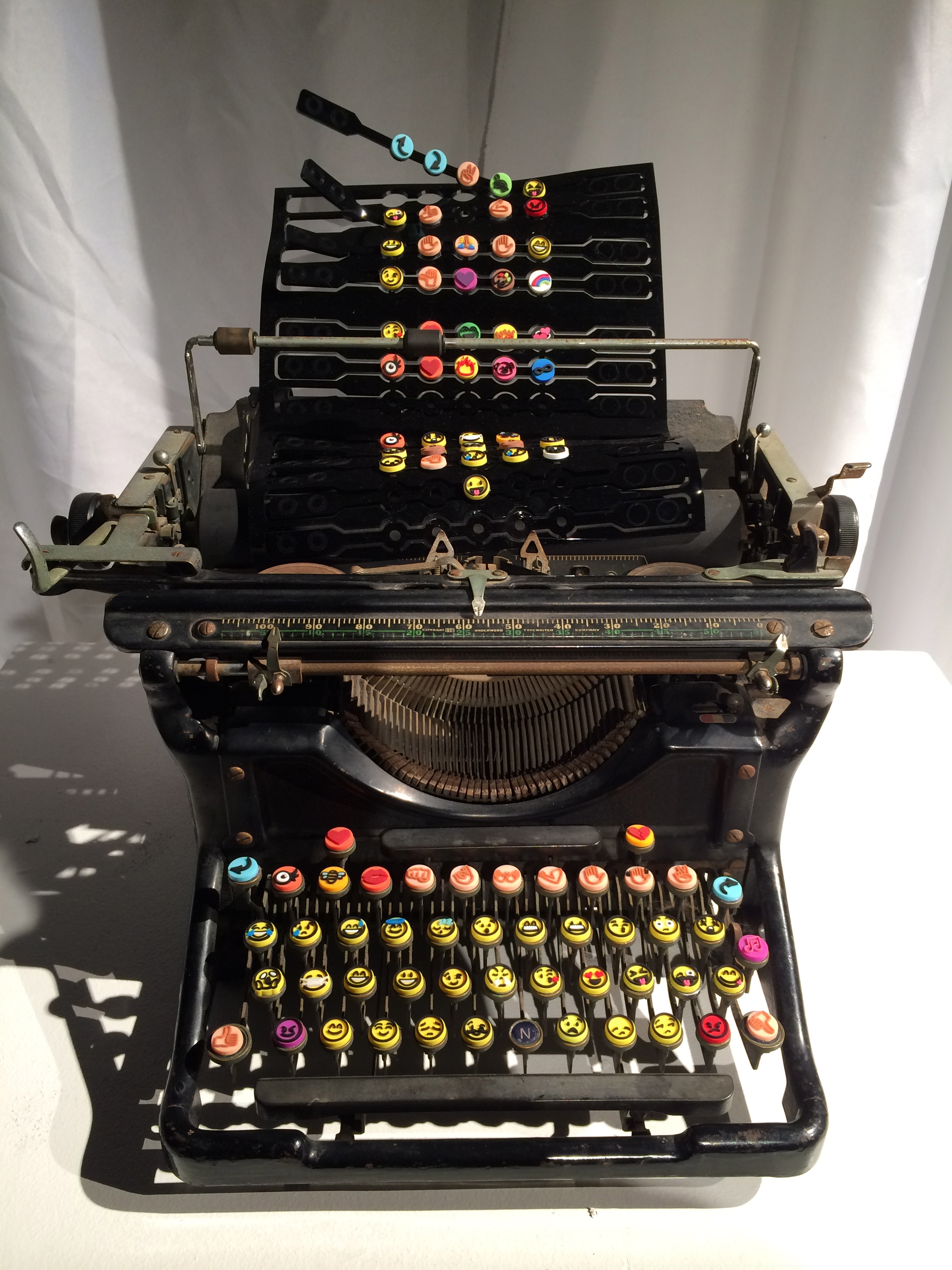 The “0 to 60: The Experience of Time” show at Pratt Manhattan gallery, which included work by Felix Gonzalez-Torres, Paul Chan, Rafael Lozano-Hemmer, Tehching Hsieh — and a bunch of other people, mostly men.

And finally, just this past weekend, I finally saw — after much anticipation — the fabulous “Drawing Time, Reading Time” and Emily Dickinson /  Robert Walser Pencil Drawings shows at the Drawing Center. Again, as with Reichek’s work, we’re exploring the materiality of language — one of my favorite things to think about:

And as a post-script, some other beautiful things from my winter break: