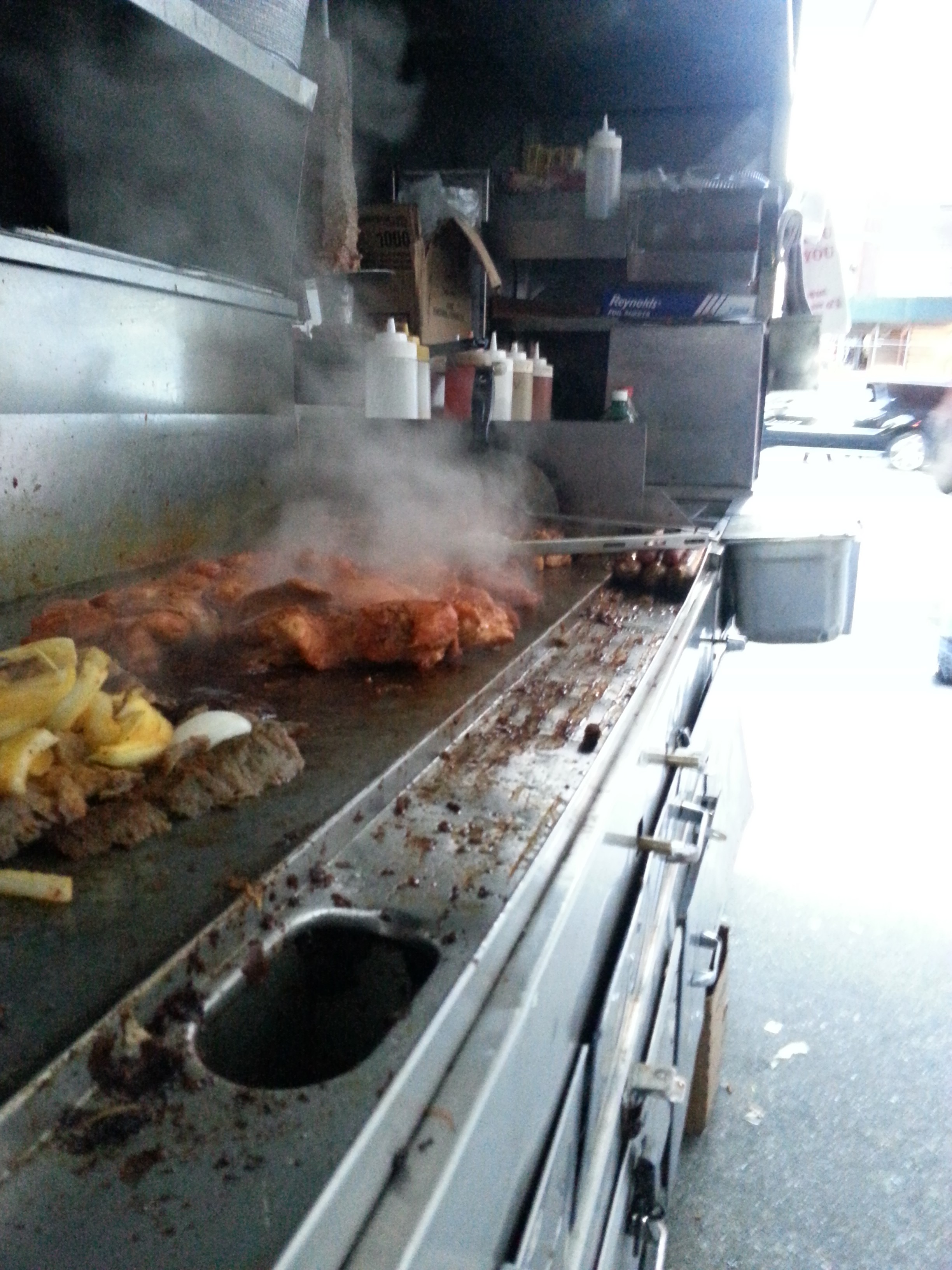 We’ve wrapped up our fourth semester of Urban Media Archaeology. Once again, Rory and I were blown away by the students’ innovative research projects, their applications of various methodologies, their exhaustive research (including quite a bit of archival work), and the inventive means by which they transformed their arguments into spatial stories. Here’s a little synopsis of their projects (many of which are still works in progress!), accompanied by some words of wisdom the students shared in their end-of-semester reflective blog posts about the research-and-mapping process (not everyone’s posted yet):

Hira studied halal food trucks as embodiments of global migrations and geopolitics; of local, multicultural infrastructures of exchange; and of the cultural politics of food. 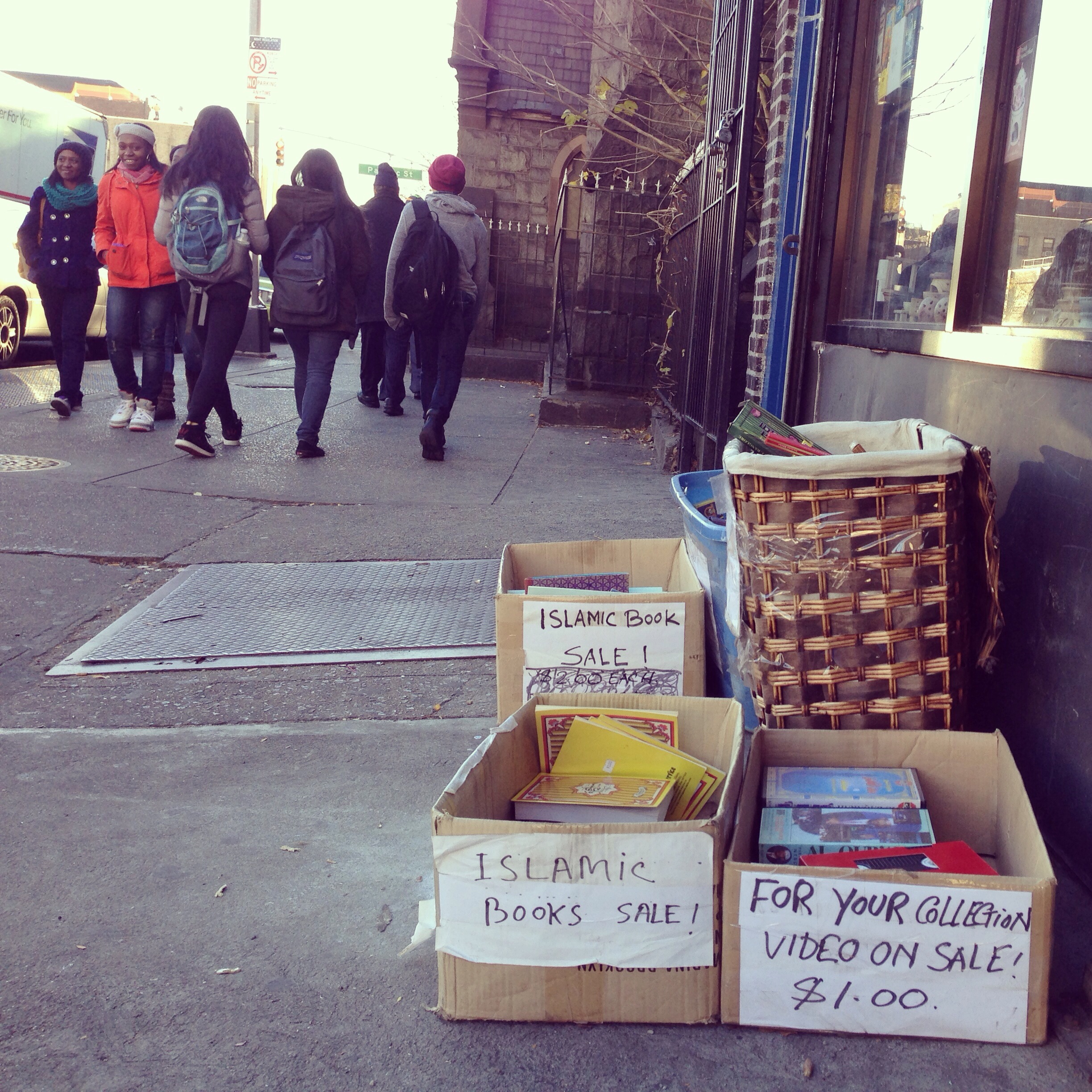 Ateqah created a counter-map — contra the NYPD’s maps of “locations of [Muslim] concern” — of sites where Muslim identity is practiced, via the call to prayer, various public acts of Muslim charity, religious ceremonies like the Juloos, sidewalk sites of Muslim commerce, etc. Ateqah reflected on the left/right brain negotiations that she undertook in creating a cartographic form — one that often pushed the limits of our mapping tool — that supported her content:

Although I was scared of (and resisting) data entry for a long time, once I started a few weeks ago, it finally clicked. In fact, it was actually fun to help some of my classmates think about how to best configure URT for some of their data sets (for example, Hira and the JFK/migration data). Once I came up with a general structure re: organizing my data (left brain activity?), I spent a lot of time focusing on how I wanted my pages to look, and how I wanted visitors to navigate through the map (right brain activity?). One of the things I quickly grew frustrated by was the lack of design control in URT, especially when using pre-set media fields. As I mentioned during my map critique of the Austin Music Map, as much as possible, I wanted to create an immersive, media-rich project. I had a lot of media assets — my own photos and video recordings, including Google Glass footage; found footage; NYPD documents, etc. I wanted to give users the opportunity to understand the project through this media, and so I spent time figuring out how best to do this. Eventually, most of these assets were added via a rich text field, so that I could configure dimensions (940 pixels wide, in case anyone else is wondering… thanks Rory!), and “design” my records in a way that really highlighted the media. I’m pretty happy with the final result. 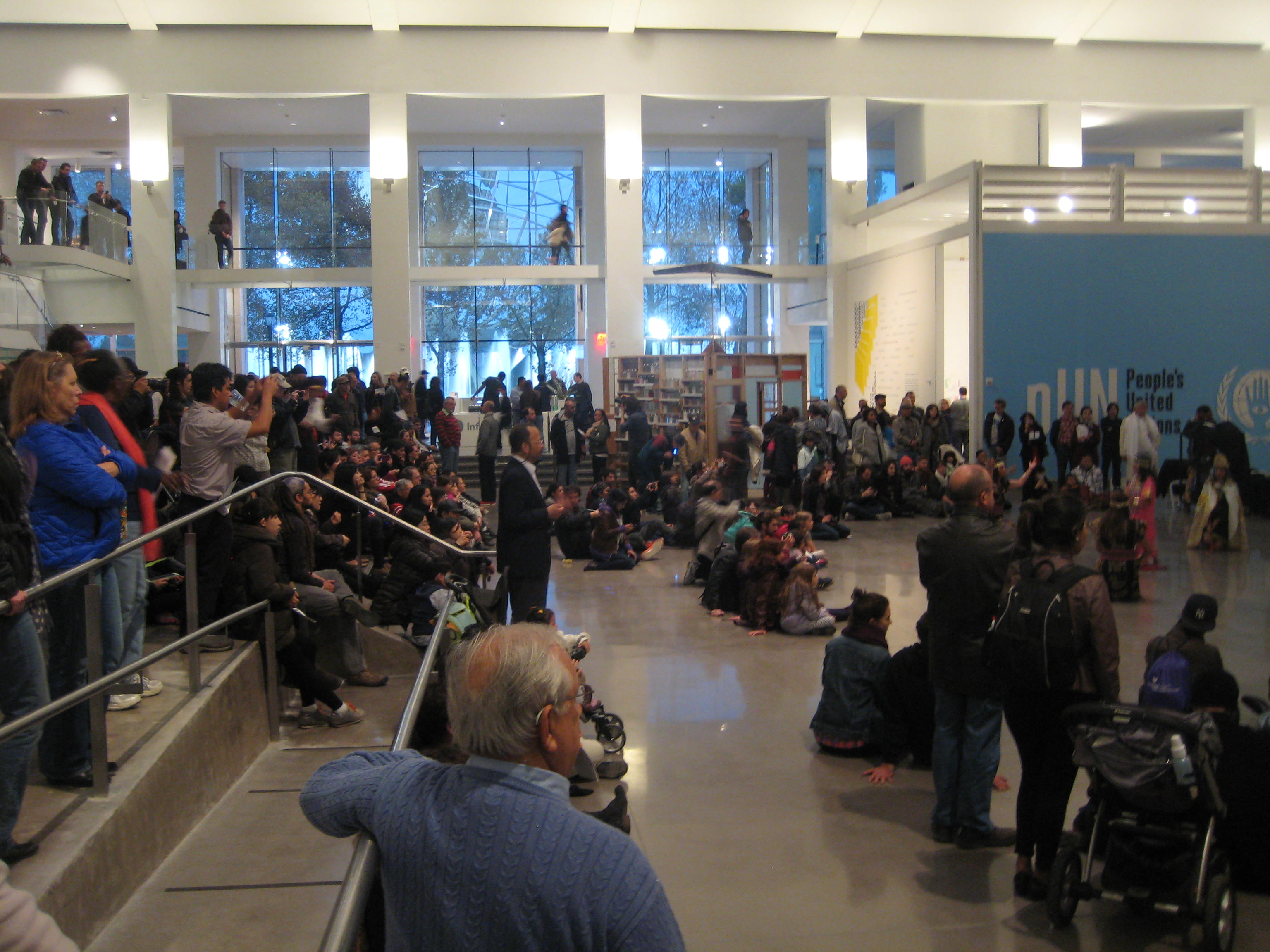 Salem explored how the architecture, exhibitions, and activities of the newly renovated Queens Museum together manifest the institution’s approach to community engagement, and contribute to the community’s process of self-definition. And here’s what she had to say about her process:

Once I shifted gears and began inserting the various media I’d gathered onto URT, everything started to make much more sense. Part of the challenge was letting go of the idea that this project should feed directly into my thesis work, which means being less obsessive about my written arguments. If anything, I think this project has helped in allowing me to really challenge and refine my initial arguments! Also, despite its quirks, URT has been a really useful tool for exploring my topic, especially since it deals directly with spatial configuration. Using a combination of images, videos, and text was incredibly useful in demonstrating how the integration of architecture, exhibitions, and programming at the Queens Museum really strengthens its mission of community engagement.

Josie mapped memories of Hurricane Sandy at Rockaway Beach, as embodied through material ruins, locals’ memories, and (sonic) traces of what was lost.

Jennifer mapped Manhattan’s fallout shelters and, in the process, studied Cold War resistance to the underground retreat and the government’s propagandistic use of shelters as means of constructing illusory spaces of escape from an illusory global threat. She reflected on the rules of mapping, and how we might constructively break them:

I… saw that mapping could be very creative.  Even though I ended up using a traditional point on a map format, the discussions about using paths or areas or using maps to denote absences were all interesting discussions that expanded my notion of what a map could be. However, I also realized that the map had to fit the subject.  I saw other students approaching their maps in such creative fashions that at times I felt I was being too hide-bound and traditional in how I approached my project. However, when I really thought about what I was trying to do I realized that sometimes a point on a map is fine as long as you have consciously made the decision that it fits your subject best.

Some additional pearls of wisdom: 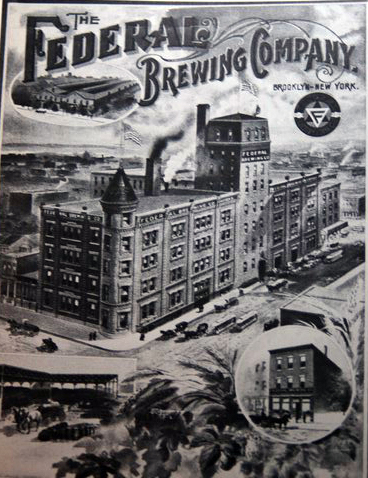 Mike, a true beer aficionado, mapped every brewery in Brooklyn from 1840 to the present — seriously: EVERY. SINGLE. ONE. — which allowed him to begin (very preliminarily) to trace how immigration, legislation, and other social and cultural factors shaped the brewing landscape. 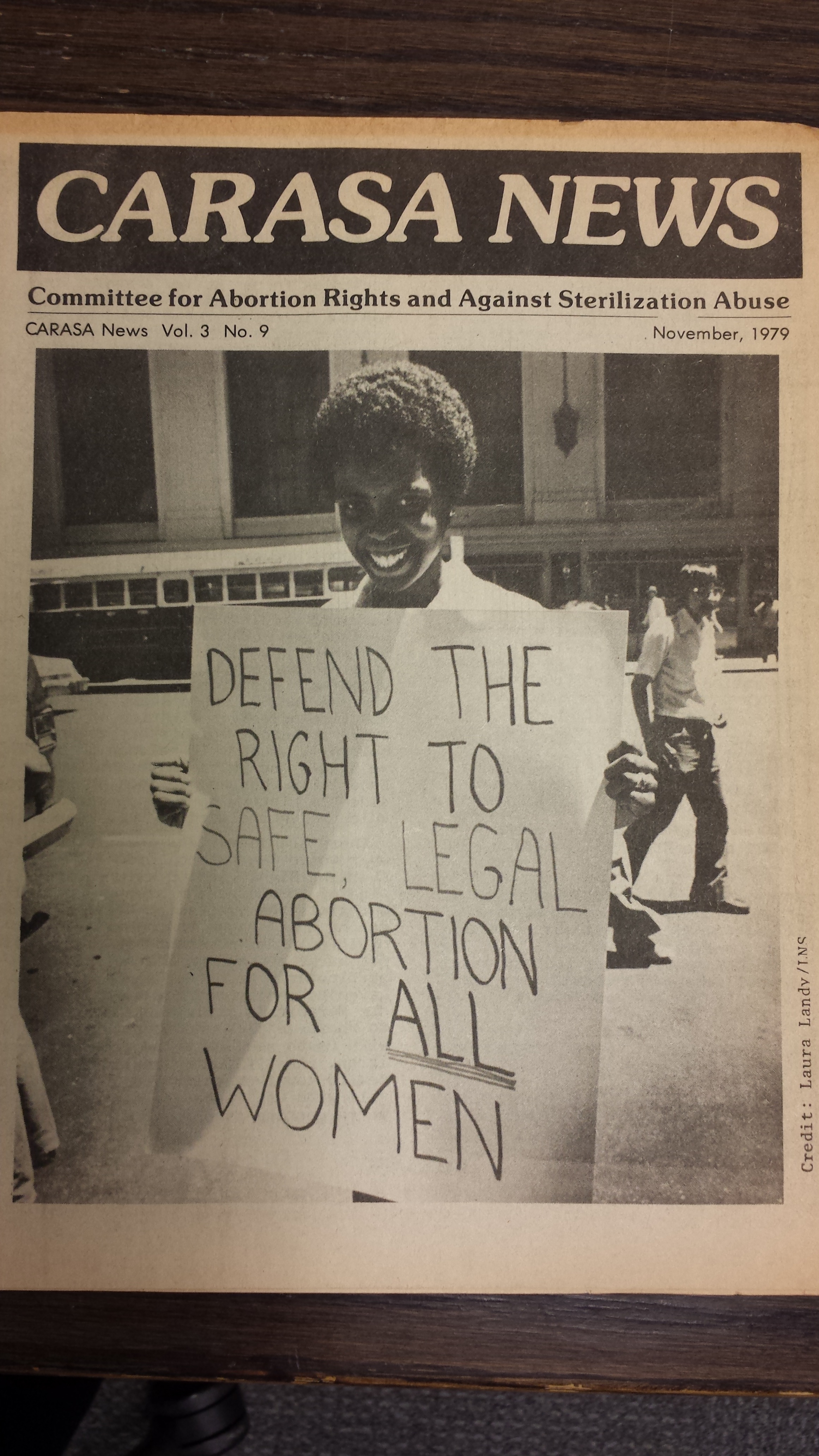 Carmel mapped key sites in battles for “reproductive justice” in the 1970s — particularly sites where minority voices entered the discourse. She reflected on “how the strategy of an organization can be revealed by mapping the protests and demonstrations conducted, which is reflective of the organization’s agenda.”

And her work in the archives made her wonder about

what we hold on to, and how the digital humanities and digital records will help contextualize history. What is the best way to preserve “voice” and the perspective of marginalized voices? How would one go about giving their records to an archive? Is this something that should be discussed more openly about what is worth recording, keeping? 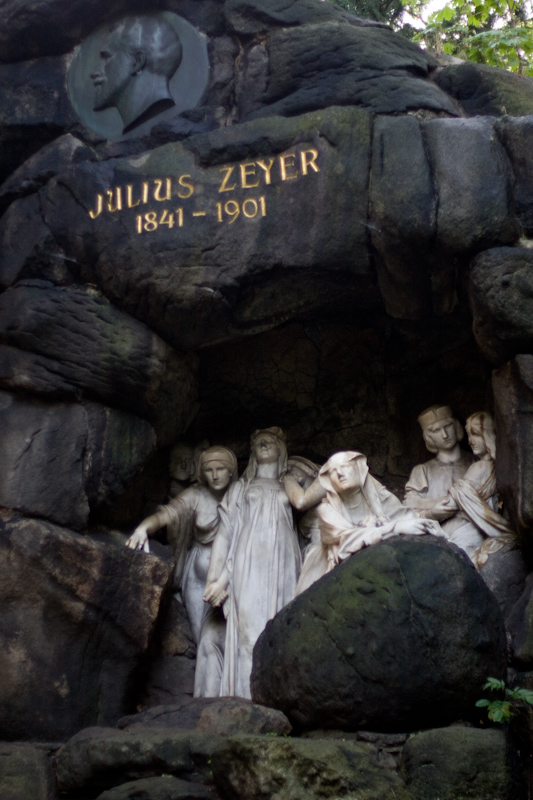 Jessica mapped monuments throughout the Czech Republic and catalogued the various figures and themes those monuments embodied across time — in an attempt to better understand the evolving “relationship[s] between politics, national identity, memory and commemoration.” Jessica commented on the striking connections between different projects:

One of the most interesting aspects of the semester was being able to regularly review the projects and witness the progress of other students in the class. I was incredibly impressed with everyone’s work and enjoyed seeing the (random?) intersections of themes, especially those that most closely related to my own project, from Laura’s work on mural’s as symbolic spaces in the community of Crown Heights, to Mike’s tracing the rise and fall of breweries, to Jennifer’s fallout shelters as imagined spaces, to Ateqah’s look at representations of cultural identity through the ‘Muslim Yelp’ argument, Josie’s mapping of what was lost, Carmel’s approach to mapping social action, and so on, and so on. Perhaps a map of the intersections of our projects is in order! 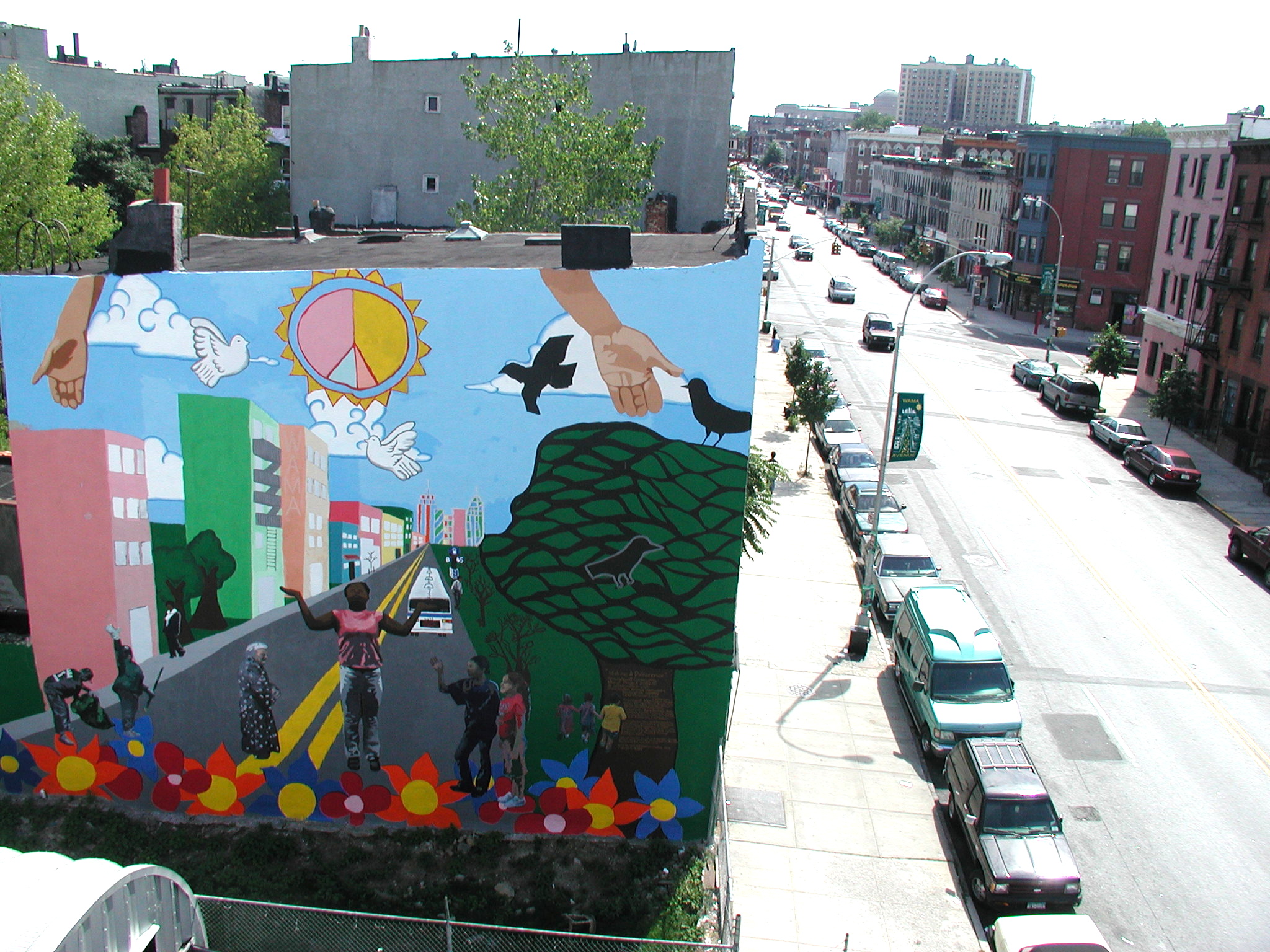 Laura mapped murals in Crown Heights, Brooklyn, and explored how they function as spaces for negotiating spatial identity — particularly in the years after the 1991 Crown Heights riots. She reflected on the iterative processes through which she and her classmates refined their project ideas, and found an appropriate form to support their content:

When considering the arc’s of each of our projects, images of burrowing come to mind. It seems to me that the semester was a process of gathering and winnowing our initial proposed research projects throughout the research process. And although we found ourselves at times covered in dirt or seed husks (really pushing the metaphor now), I think that this passion for appropriate concept and content is the strongest parts of our maps. The evidence of the struggle with form and meaning is embedded into the projects and only adds to the construction of the compelling arguments.

And she addressed the value of acknowledging — and pushing up against — the boundaries and limitations of our mapping tool, and map-based and database-based work in general:

…the most exciting parts of our maps most often take place in experiments with breaking or exploiting the limitations of the database. I think that we all would have liked to do more of this, but were not quite sure how to determine the spectrum of ways this could happen, as only having a very superficial understanding of the medium. However, I think that even the limited understanding we have of it will serve as an insightful methodology for continued scholarship. 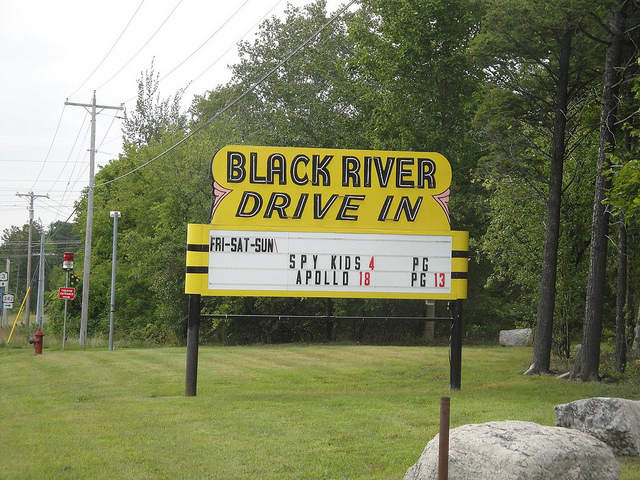 Jessica mapped extant drive-ins in New York State, and made a case for how they construct a unique hybrid space of public privacy — one deeply infused with nostalgia.

…my “arguments” started to become clear after I spent awhile creating and deleting record after record and layer after layer. Though incredibly frustrating at times, URT forced me to use only the most pertinent pieces of information and really think about the possible connections that existed between. Every time I added a field, I had to think, “wait, why am I doing this?” In the case of a paper, you can write and write and write without the aid of any kind of personal check. 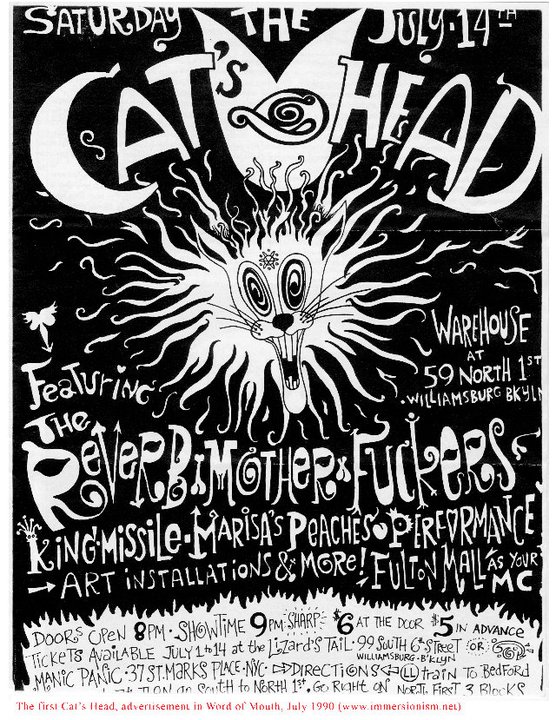 Jung studied the political economy of Williamsburg, Brooklyn’s, rise and fall as an art mecca. And she offered some valuable insights regarding the variety of methods one needs to employ in order to understand how a place comes to be the way it is:

The investigation we dived into in this class really taught me that the a constructing concept of a place is truly a multi-dimensional practice. It really takes efforts to go through reading, go through social engagements with people, and always to go through physical practices of walking around the place.

She also considered the rhetorical power of maps:

One of the biggest takeaways I had through working with URT was learning the graphical powers maps can carry. At the beginning of the class, mapping to me was just finding out the points of location and naming them. The graphic stories that maps can tell seemed very limited. However, through working and struggling with URT, the limited freedom  actually encouraged me to explore more. The three kind of mapping, Path, Area and Points, encouraged me use them and individually learn how they help to visualize concepts on my map. I enjoyed finding out how drawing out an area can represent large warehouses better than points, and how mapping a path can represent migration and really embody the concept of a physical journey.

And she reflected on the value of primary research — interviewing people who were there and are there, living and working where you’re researching — and consistent documentation throughout the development process:

Although I went through a lot of readings and pictures, I didn’t do a good job in organizing them…. This perhaps where the digital humanist’s rule of open documentation would work. If I had documented the valuable inspirations more often through out my researching process, I feel I wouldn’t be so scattered in writing my arguments in the end. This development process is definitely something I want to practice more moving forward. 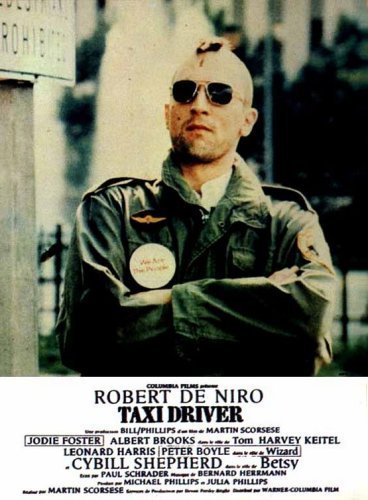 Robert, who grew up above a movie theater — lulled to sleep some nights by the soothing sounds of Apocalypse Now — explored the geography of violence as represented in serial killer films, and as manifested in real-life serial killers’ paths of destruction. Gnarly. 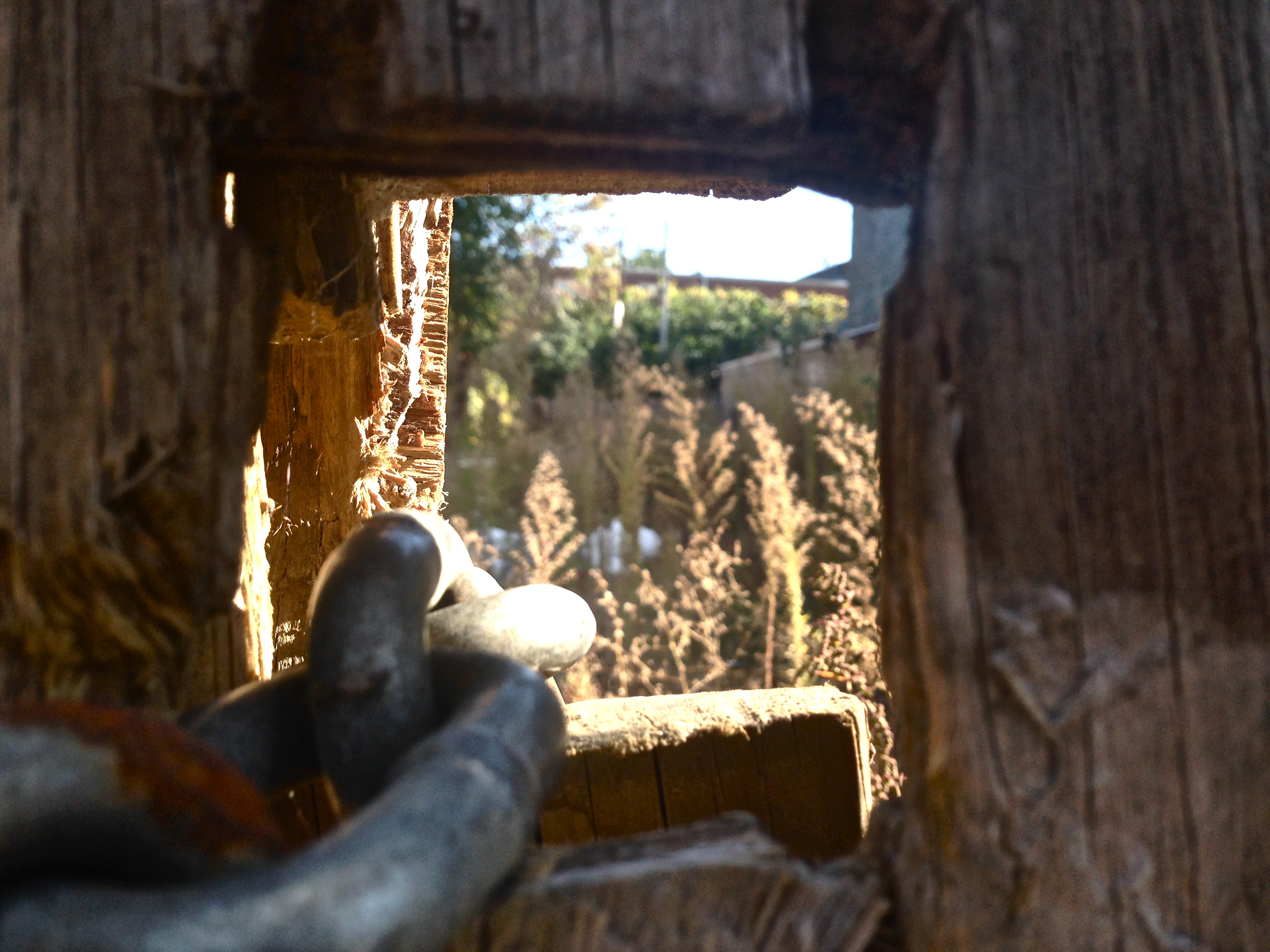 Hugo studied how abandoned spaces might be reconceived as space of opportunity — for squatting, for community activity — and how artistic interventions might make manifest those opportunities. Hugo talked about the myriad methods he employed in researching his project:

It was great to get information first hand and have the opportunity to talk to member of the community where does abandoned spaces exist, and also to talking with groups or organizations that through direct action had changed the paradigm of what a space is and the possibilities of what it can become.

such great projects! it was so wonderful to see everyone’s work. i think its amazing how everything about each person’s project — the subject matter, the way they utilized URT, the way they presented — was so specific and representative of them.