In the spirit of Thanksgiving, I’d like to thank New York for always having a ready supply — an embarrassment of riches, actually — of art that I can stuff into my eyes an ears and brain. Some days when I leave Chelsea, I feel literally drunk: simultaneously buzzed and blissed out and all “ohmygod I love you guys!”-kind of grateful (which translates to, “thank you, artists, for making such beautiful and amazing things that help to make the world such a gorgeous place, so pregnant with fascinating ideas and so deliciously complicated).

Also in the “identity construction” vein, but with more of an “Avant-Nazi Goes to Barneys” vibe: Josephine Meckseper at Andrea Rosen. I figured she was playing around with forms of consumer display, fetishized beauty, the totalitarian politics of design, etc. I’m glad the press release validated, and added some additional dimension to, my reading:

Evoking the modernist architecture of Ludwig Mies van der Rohe’s Barcelona Pavilion and the way in which it framed a single sculpture by Georg Kolbe, Meckseper’s vitrines both show how works are contingent on environment and context and how they can become subject to the vicissitudes of external ideologies. The stainless steel and glass vitrines in her current exhibition house arrangements of early 20th century inspired hand made sculpture casts and paintings, taking on a similar function as Mies van der Rohe’s well-known designs and glass structures for art collections: art and art history are here on display.

And more on techniques of representation: Barbara Probst at Murray Guy. She uses radio-controlled shutter releases to take up to thirteen photos of the same scene or event simultaneously, thus proposing a lovely “piecing together of fragmentary glimpses” ontology. I particularly loved the following piece, whose almost-13-ness almost allowed me to reference one of my favorite Wallace Stevens poems.

Bruce Nauman played around with optical illusions and techniques of graphic representation in “Some Illusions: Videos and Drawings” at Sperone Westwater.

More in the graphic realm: Roni Horn at Hauser and Wirth. There were two rooms of Karim-Rashid-ish sculpture that didn’t do much for me (although I did like that the ambient light in the back room made it feel like an Antarctic futureworld), but I particularly enjoyed her drawings, which I imagined to be maps and plans for imaginary places. One of the gallerinas explained that Horn begins with small drawings, cuts them up, then inserts additional sheets of paper to expand those initial sketches into larger-format works — hence the piecemeal character of the depicted terrain.

More on techniques of representation: John Houck’s “A History of Graph Paper” at On Stellar Rays, which I actually saw at the end of October. I read Houck’s works as a very literal representation of that McLuhanesque dictum regarding how “our tools shape us.” He also seemed to be experimenting with skeuomorphic interface design, juxtaposing three-dimensional and hyper-flat renderings and digital and analogue versions of various compositional techniques, like cut-and-paste. 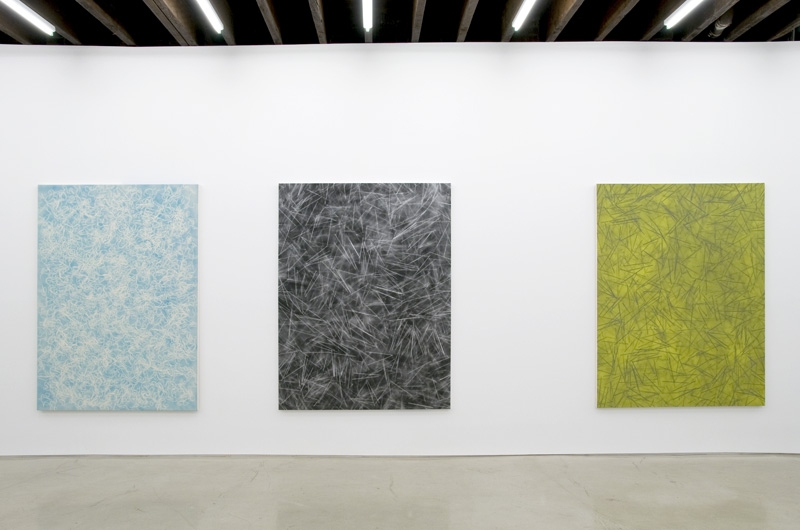 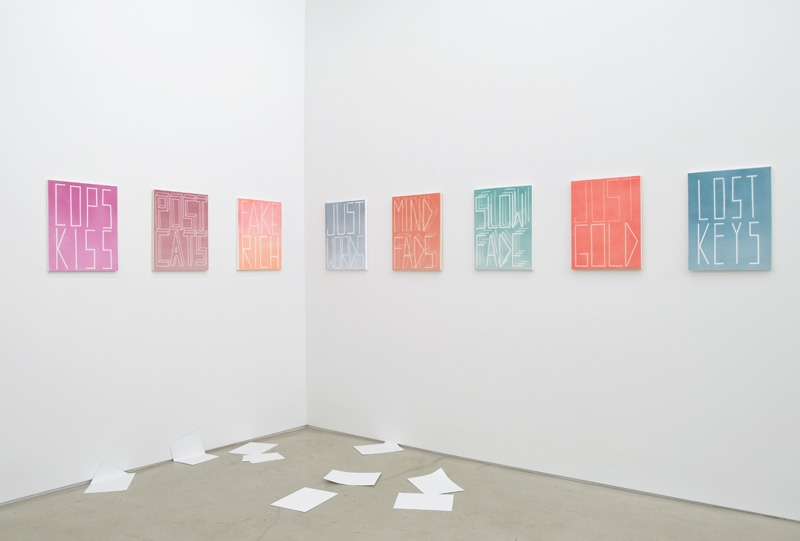 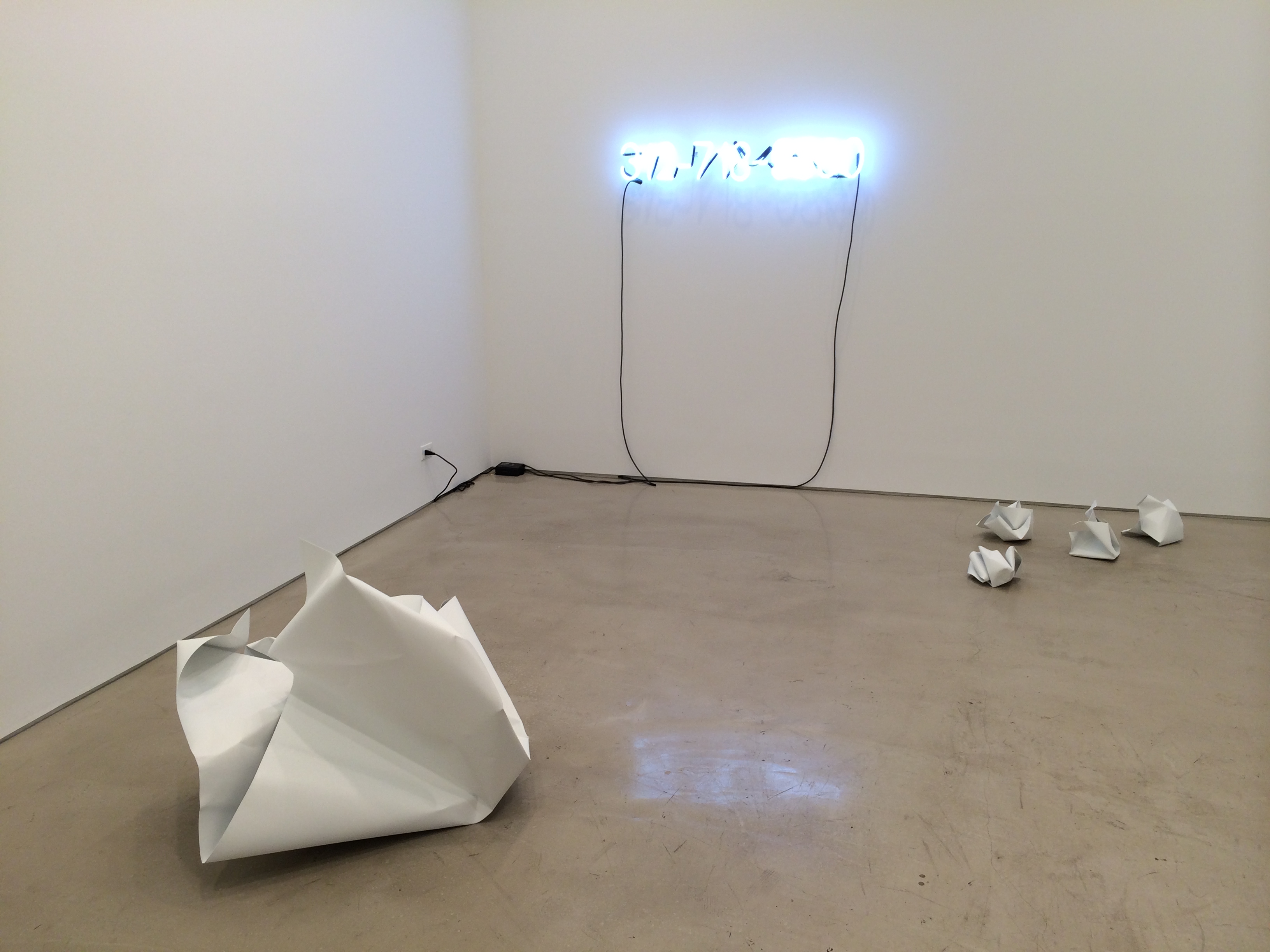 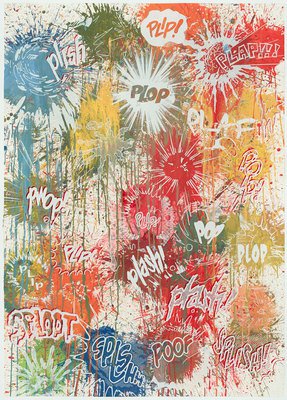 Just as Reeder (and Ruscha) allows language to formally “perform” its meaning – as a kind of visual onomatopoeia — Christian Marclay, whose work typically explores the materiality of sound, translated comic book sound effects into visual forms, merging expressive text and painterly gesture, at Paula Cooper (I couldn’t get the full-size image to align properly; hence the poorly cropped thumbnail).

Liam Gillick and Louise Lawler were also playing with language at Casey Kaplan. The gallery describes their collaborative experiment:

This exhibition marks the first time that Gillick and Lawler have shown together, and is the result of a simple idea: to have two artists show alongside one another in the same space. Here, Gillick and Lawler operate in parallel – Lawler occupies the walls and Gillick hangs his work from the ceiling. The dates of the exhibition determine its parameters. The artists then produced two extensions – one via text and the other through images – that both address time without resorting to time-based media….

Lawler’s work takes two significant images from her archive and stretches them at eye-level around the perimeter of the gallery space. Both images are of institutionalized artworks. The first is focused on the space between works by Carl Andre, Richard Serra and Gerhard Richter. The second image is of an Edgar Degas sculpture of fourteen year-old ballet dancer, Marie Geneviéve van Goethem, photographed and cropped from behind. Once placed and pulled, they transform into smeared abstractions, occupying a new time and space that is disconnected from the photograph’s originating moment.

Gillick’s large-scale, text-based installation, Övningskörning (Driving Practice Parts 1-30), describes a scenario conceived during a site-visit to the town of Kalmar, Sweden where Volvo had first instituted its socialistic approach to auto-manufacturing in a now-defunct factory. Formatted as an outline for a book, the work consists of key sentences from the text that are cut from aluminum and suspended from the ceiling. The narrative imagines how production could be controlled following the breakdown of organized systems. Its compressed reading can only be had while moving through the gallery, following the blurred and stretched images on the walls. 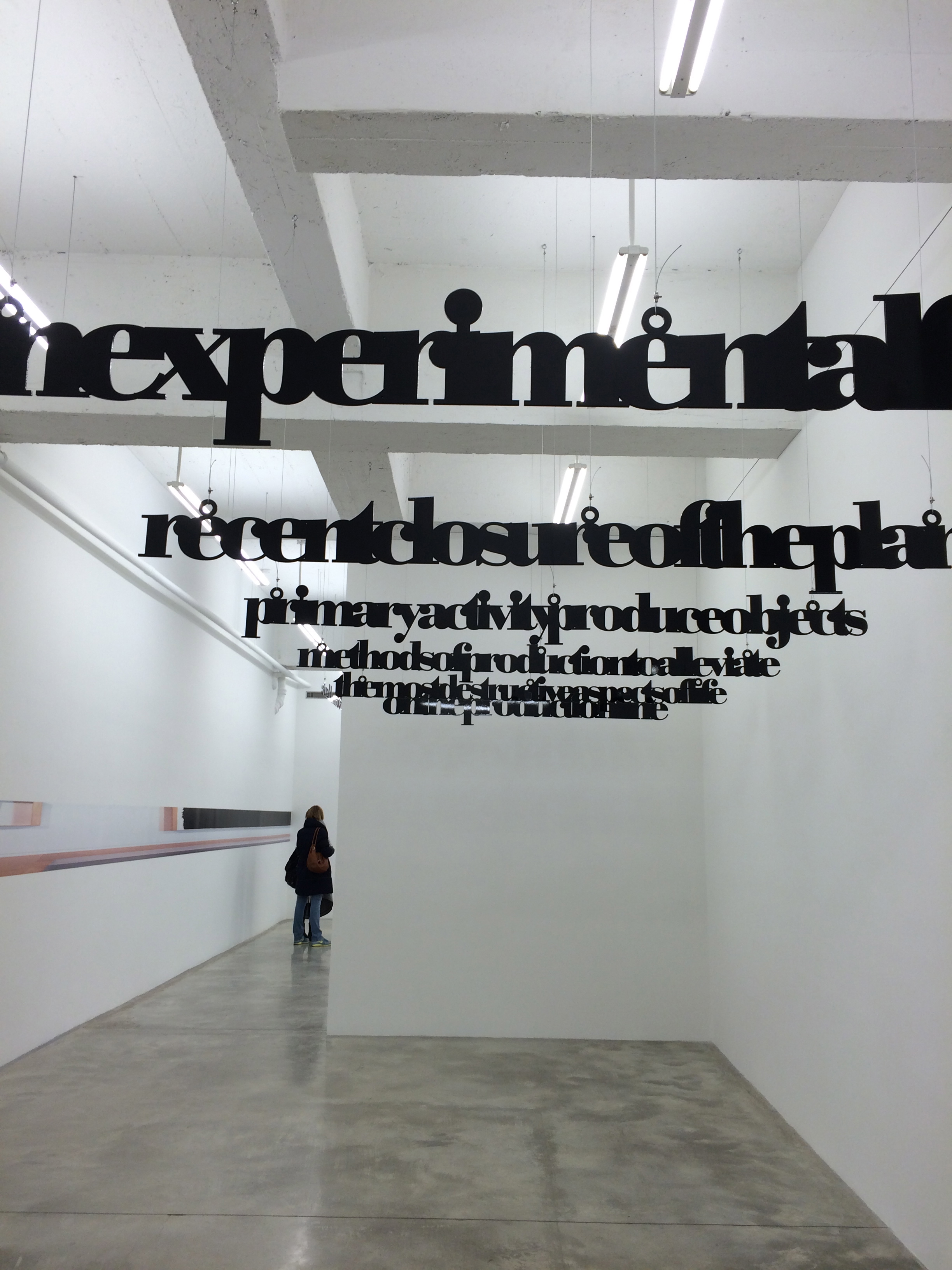 And then, of course, we have Christopher Wool at the Guggenheim — about which I’d like to say a bunch, if it hadn’t already taken me two hours to get to this point in my post.

But what a show! I had been most familiar with his language paintings — but this exhibition, and particularly the way it was hung, helped me to appreciate how Wool, throughout his career, grappled with so many issues that are of interest to me: medium specificity, what it means to make a mark, what it means to make a “copy” or a “version” of a work, how conventions and codes are formulated and subverted, how the hand relates to the machine, etc. etc. etc. The show demonstrated beautifully how Wool originated, practiced, layered, and stripped away various techniques — silkscreening, free-form painting, stencil painting, spraypainting, photography, various means of erasure, cosmetic and physical fracturing, other analogue precursors to the “glitch” (all of which made me think of the Wade Guyton show at the Whitney from last year) — even reorienting the canvas so that the medium’s materiality is unmoored (e.g., paint appears to drip sideways). I just loved it.

(Not) Coincidentally, Wool’s Apocalypse Now — which you could totally turn into one of those “bless this mess”-style homemaker plaques and sell on Lillian Vernon — sold at auction for $26.5 million two weeks ago. And speaking of global capital: Isaac Julien’s Playtime, a gorgeous pseudo-documentary film (tainted by a James Franco appearance, as so many things are) showing at Metro Pictures, toured three global financial hubs — Reykjavik, London, and Dubai — and examined how various figures — the collector, the houseworker, the artist, the auctioneer, and the reporter — have been entangled in the global financial crisis.

Switching from the macro scale of global capital to the micro scale of everyday detritus: I saw Thomas Demand’s “Dailies” at Matthew Marks. Departing from his normal practice, which involves creating models of mass-mediated scenes, then photographing them, here Demand models quotidian scenes culled from cell phone photos, then prints them using a dye-transfer process. The intensive manual labor involved at each stage of this production process subverts the automation of the digital, and echoes many of the themes — regarding process, craftsmanship, the role of “the hand” in the age of the digital — central to other exhibitions. 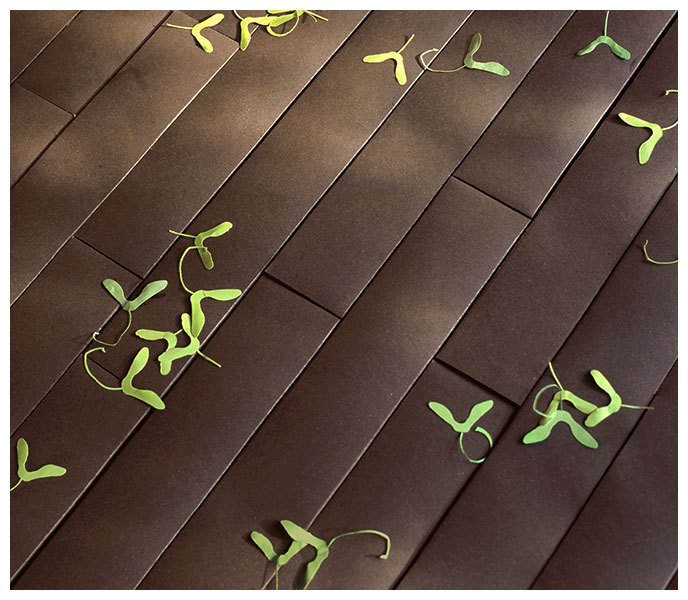 Finally, David Schafer’s “Four Letters to Mahler” at Studio 10 in Bushwick plays with similar concepts — specifically the materiality of language, and the intellectual and physical representation of identity — in different modalities, particularly sound. Taking as his inspiration a series of letters Arnold Schoenberg wrote to Gustav Mahler in 1909 and 1910, Schafer constructed an aluminum sculpture that serves as both a physical and conceptual framework for that correspondence. Affixed to the struts are four of Schoenberg’s letters, rendered in negative on transparent film, illuminated from behind by two fluorescent lights. Here, language in its visual incarnation is transparent; it’s Beatrice Ward’s “Crystal Goblet”: the type that renders itself invisible so we can see through it in order to access its semantic content. 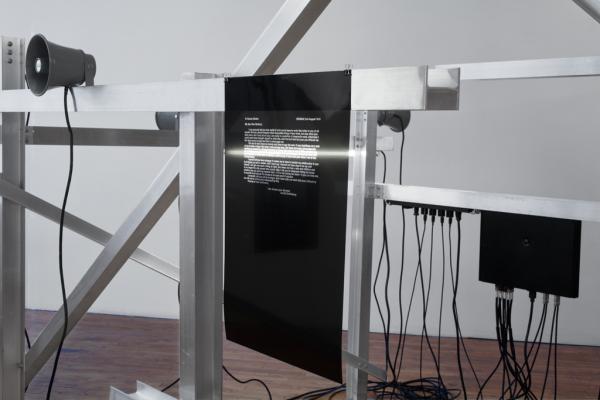 Also attached to the sculpture are four ipods and eight speakers — one on each side of the four text panels, but positioned such that they face in various directions — featuring directed readings of the four letters in German-accented English. According to the press release:

Each iPod is dedicated to one letter that is repeated with twelve variations. The tracks are processed with electronic treatments involving degrees of delay and distortion that interrogate the language to its collapse.

Given Schoenberg’s renown for atonal and 12-tone composition, we might expect that sonifications of his correspondence wouldn’t be “easy listening.” In contrast to the transparency of the text panels, these audio recordings accentuate the “constructedness,” the “composed-ness,” of language. Listening thus requires a sophisticated “audile technique,” as Jonathan Sterne might say. And the positioning of the speakers at unpredictable intervals and heights around the structure requires that we improvise a choreography as we move around the sculpture, attempting to piece together these auditory fragments into some sort of semantic (or melodic… or rhythmic?) whole.

If such a holistic composition — if sense-making — is even possible. The aluminum sculpture is really what braces everything together; it’s what reminds us of the existence of an infrastructure that ties the transparent text panels to the deconstructed audio tracks. This aluminum frame is Saussure’s langue, the underlying system of language that allows for variations in its individual utterances — and modalities.

Similarly, Schafer’s companion piece, DSENOISE, is a boxed set including 12 CDs — each month Schafer released a recording of his own electronic noise performances — a poster, an insert, and a sticker in a hand-assembled box. As he explains, the project is a “conceptual document that contextualizes this sound work in multiple forms including mp3, vinyl, cd, cassette, and live performances.” Again, we’re working with language — mark-making, sound-making — representation, and identity in their myriad modalities. This is a refrain we’ve heard echoed throughout much of this work. It just so happens to be a note I can’t help but hear in pretty much everything I encounter.