Last weekend, after experiencing the amazing Massive Attack v Adam Curtis gesamtkunstwerk at the Park Avenue Armory and a lovely Jean Tinguely / Rauchenberg “Nouveau Réalisme” “assemblage” show at Sperone Westwater, a friend and I visited Lisa Cooley on the LES to see Cynthia Daignault’s “Which is the Sun and Which is the Shadow?” I was particularly taken by her “I love you more than one more day,” an installation consisting of 365 oil paintings of the sky, which was given its own back room in the gallery.

Standing in that room, surrounded by all those windows onto the heavens, was mesmerizing. As should be obvious to anyone who’s familiar with my research interests and aesthetic tastes, I’m fascinated by spaces that embody an intellectual order, an epistemology — by the parallels between physical and conceptual infrastructures. And after a few minutes among Dignault’s clouds, I felt as if I were inhabiting an ambient index: a visual cataloging of multiple orders — of shades of blue, of brush strokes, of brush sizes, of cloud types, of climatic conditions, of degrees of realism vs. abstraction, of mood. I began to think about the order in which the paintings were hung, and what patterns we might find. I began to imagine the room as an inhabitable “mood test” that psychiatrists might use with their patients: “okay, point to the painting that best represents how you feel today.”

While Daignault’s accompanying text contains a sense of longing (the piece’s lovely title is drawn from Joan Didion’s The Year of Magical Thinking), I instead felt a sense of completion — some approximation of the satisfying fulfillment we’ve longed for in our eternal pursuit of the universal archive. What a pleasure it is to inhabit a room, if only for a few minutes, that offers a year’s worth of windows onto the celestial index. 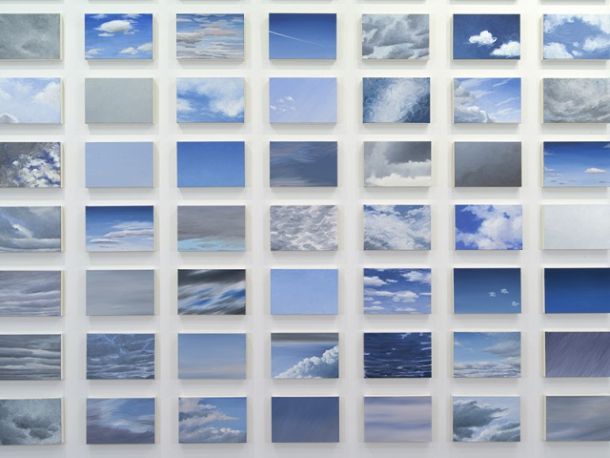