The galleries have revived after their summer dormancy, and I’ve been very eager to reinstitute my monthly art-marathon Saturdays — so eager, in fact, that I’ve spend the past two Saturdays in the galleries, with some nice company.

I also had the pleasure of attending two recent art symposia: one for Theaster Gates, who’s the Vera List Fellow at The New School this year; and the other on “sensing space,” which was staged in relation to the James Turrell show at the Guggenheim (which I also saw). I was actually asked to take part in the Gates conference as a panelist — but because I hadn’t had an opportunity to see his Dorchester Projects, in Chicago, first-hand, I felt uncomfortable pretending that I had anything authoritative to say. I tweeted parts of both events. Here’s my Storify for Gates (I should note that Twitter repeatedly auto-corrected Aleksandra Wagner’s name to “Alexandra” — so there are a lot of typos here), and another for Turrell.

And now I’ll highlight the most memorable of the 19 exhibitions I’ve seen over the past two weeks, then gloss the rest. These art-roundup posts always end up taking me a ridiculous amount of time, particularly when I add commentary — so I’m simply going to copy in some relevant PR speak to explain the salient points in this work.

END_OF_DOCUMENT_TOKEN_TO_BE_REPLACED 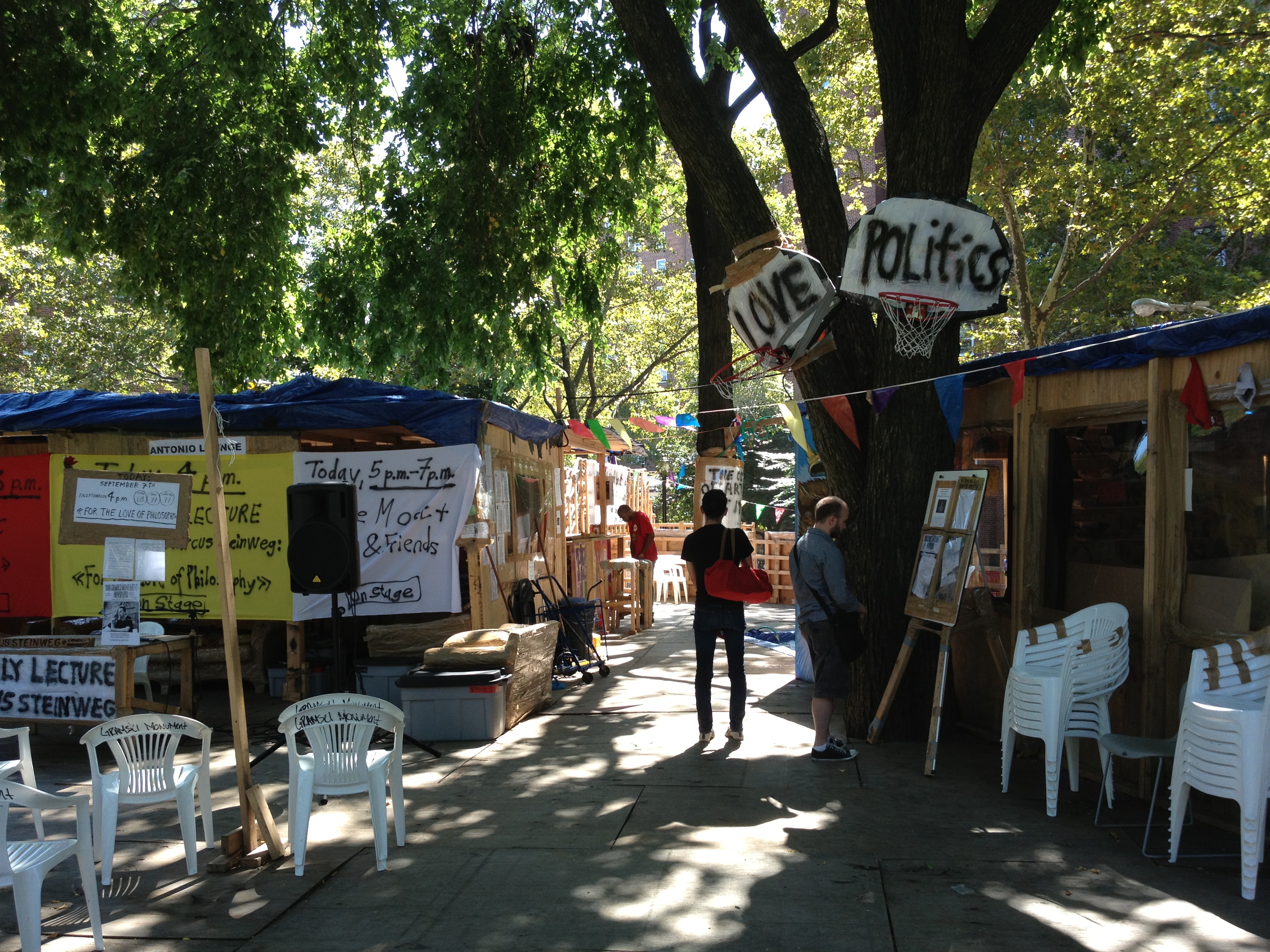 Last weekend Rory, Danielle, and I trekked up to the Bronx to see Thomas Hirschhorn’s Gramsci Monument, a compound, much like a low-lying adult tree-house, composed of plywood, plexiglass, and packing tape, and offered in homage to the Italian philosopher Antonio Gramsci. Throughout the summer the project, funded by the Dia Foundation and built by Hirschhorn and residents of the Forest Houses (who were paid $12/hour), has served as home to heady lectures, concerts, and art programs. As the Times’ Randy Kennedy put it, it’s an “inner-city intellectual Woodstock” composed of the “totems of a postapocalyptic garbage cult.” 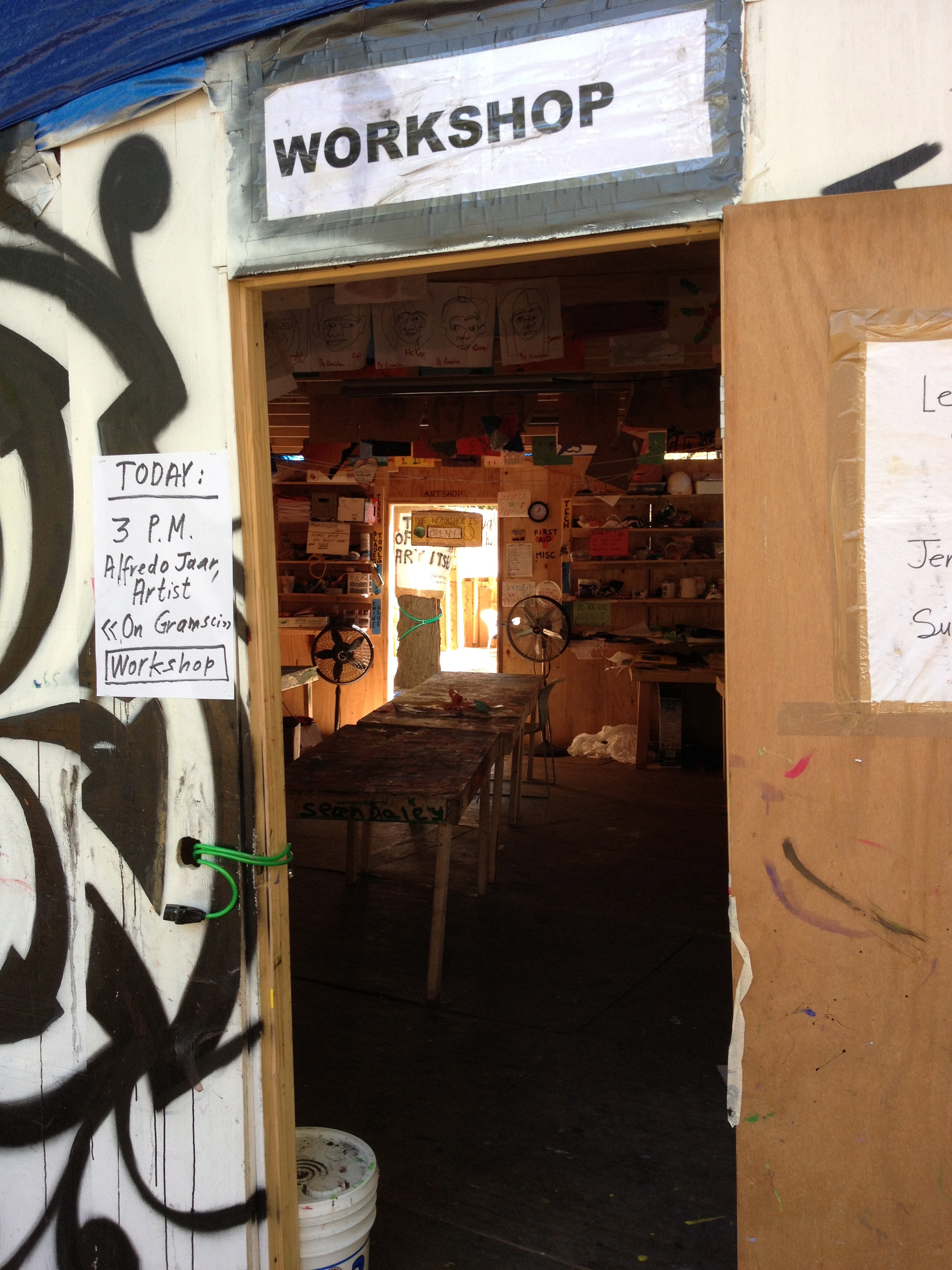 The compound’s various platforms feature an arts workshop; a stage for presentations and performances; a restaurant with two-dollar burgers and one-dollar hot dogs and well-ripened bananas; a computer lab full of kids playing video games; an exhibition space featuring objects on loan from the Casa Museo di Antonio Gramsci in Sardinia and the Fondazione Istituto Gramsci in Rome; a radio station; a newspaper office where residents put out a daily photocopied edition; various seating areas; and an archive and library housing roughly 500 books on loan from CUNY’s Calandra Italian American Institute.

Hirschhorn supposedly met with folks at nearly 50 housing projects before he found a champion in Erik Farmer, president of Forest Houses’ Residents Association. Farmer appreciated not only the offer of temporary employment for his fellow residents, but also the potential to inject something new into the neighborhood:  “There’s nothing cultural here at all,” he said to Kennedy. “It’s like we’re in a box here, in this neighborhood. We need to get out and find out some things about the world. This is kind of like the world coming to us for a little while.” Meanwhile, Hirschhorn must’ve felt he had found an ideal host in Farmer, who “was the only one who asked me to give him a book of Gramsci to read” (Monument program).

I must admit: the three of us felt rather sheepish about our intellectual-cultural tourism to the South Bronx, an area of the city each of us had visited only once or twice in our many years in New York. I went primarily, I’m slightly embarrassed to say, to satisfy a curiosity piqued when I read an article by Hal Foster in October in 2004. I had seen Hirschhorn’s work in various shows before, but I’d never experienced one of his place-based installations (his “direct sculptures,” altars, kiosks, and monuments), which Foster takes as evidence of an “archival impulse” in contemporary artwork (other artists who fit within this movement, according to Foster, include Sam Durant and Tacita Dean; I’d include these folks, too). 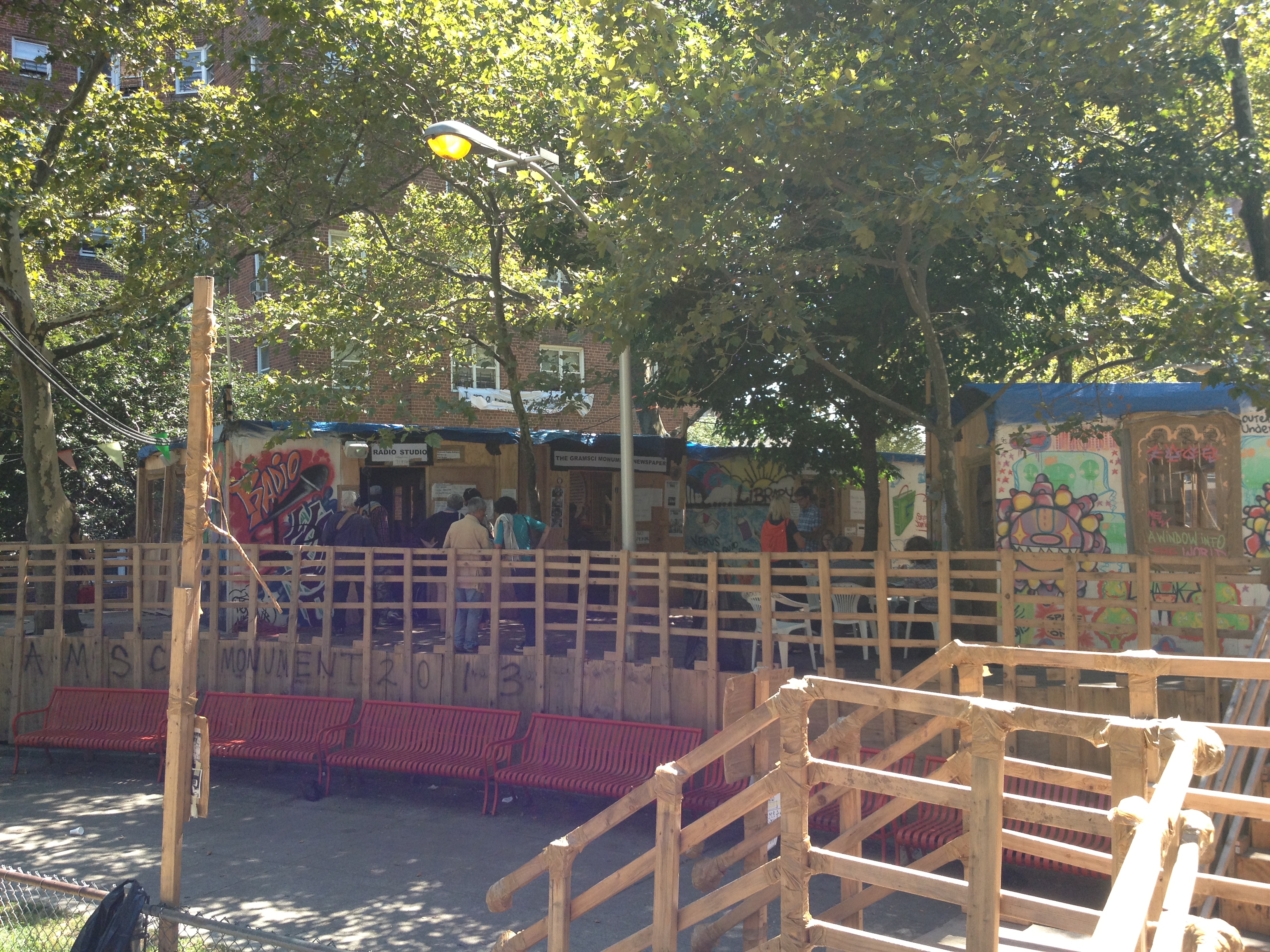 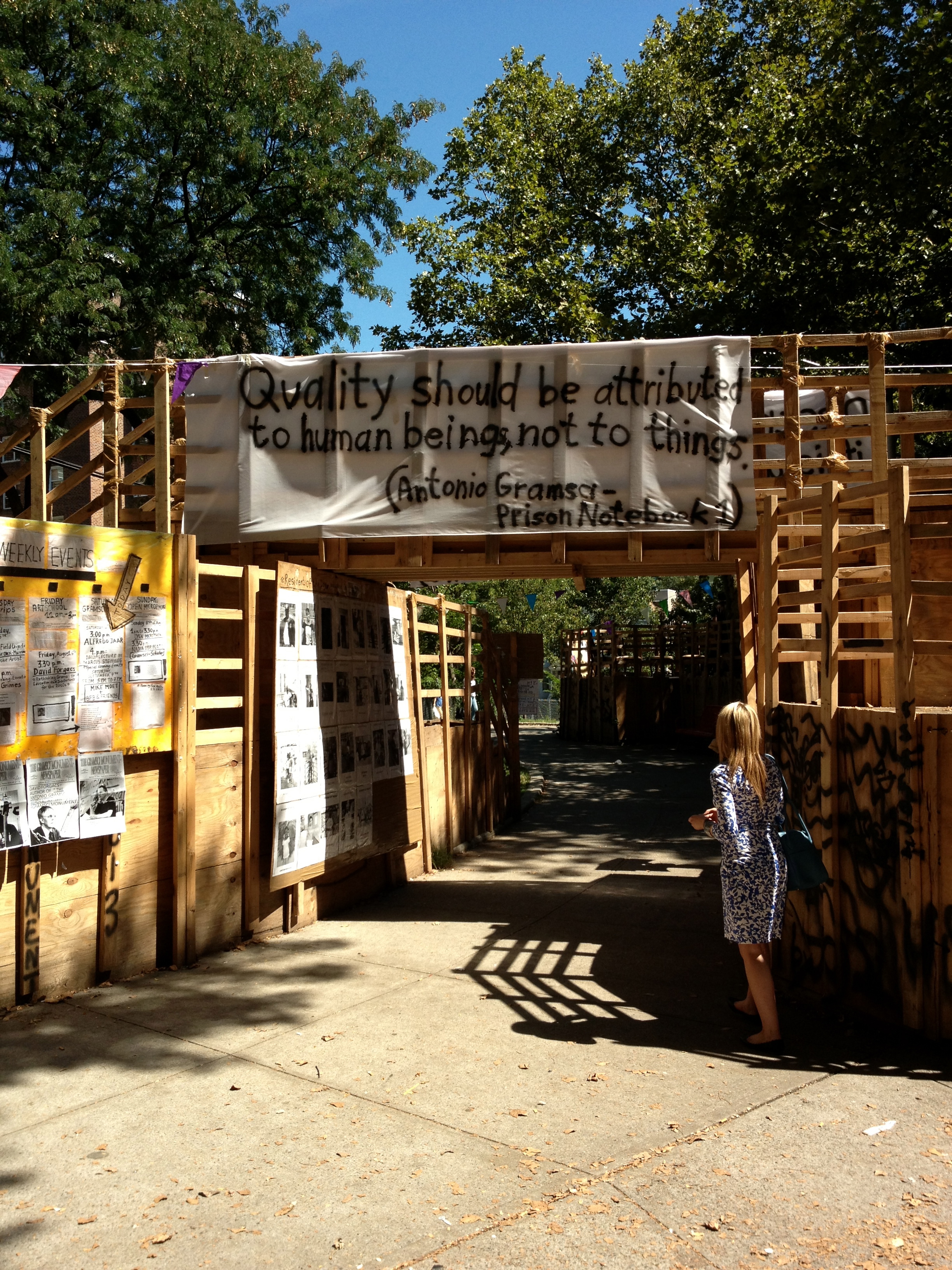 It was the archival impulse that drew me to the Bronx. Here’s how Foster explains the draw of the archive: “archival artists seek to make historical information, often lost or displaced, physically present” (4). They “elaborate on the found image, object, and text, and favor the installation format” and its “nonhierarchical spatiality.” They gravitate toward readymades, composed of objects “drawn from the archives of mass culture, to ensure a legibility that can then be disturbed or detourned, but they can also be obscure.” Much of this work is “relational” in nature, and thus adopts expression that is “far more tactile and face-to-face” than the uber-archive of the Web. These archives as “recalcitrantly material, fragmentary rather than fungible, and as such they call out for human interpretation, not machinic reprocessing” (5). Work inspired by the archival impulse “not only draws on informal archives but produces them as well, and… in a way that underscores the nature of all archival materials as found yet constructed, factual yet fictive, public yet private.” And finally, it “arranges these materials according to a quasi-archival logic, a matrix of citation and juxtaposition, and presents them in a quasi-archival architecture, a complex of texts and objects (…platforms, stations, kiosks…)” (5).

The Gramsci Monument — with its nonhierarchical circulation, its reclaimed materials, its bulbous nodes of packing tape and springy plywood platforms, its smells of grilled hot dogs wafting across the courtyard, its white plastic chairs arranged in clusters to foster conversation, its library shelves offering a mix of heady intellectual books and Ebony magazines — certainly bears out Foster’s description. He further proposes that Hirschhorn’s work is a response to, a “grotesquerie of,” our “immersive commodity-media-entertainment environment” (10-11). These platforms offer the “intimation of utopian possibility, or at least a desire for systematic transformation” — new development atop the landfill borne from what Hirschhorn calls the collective “capitalist garbage bucket” (11). 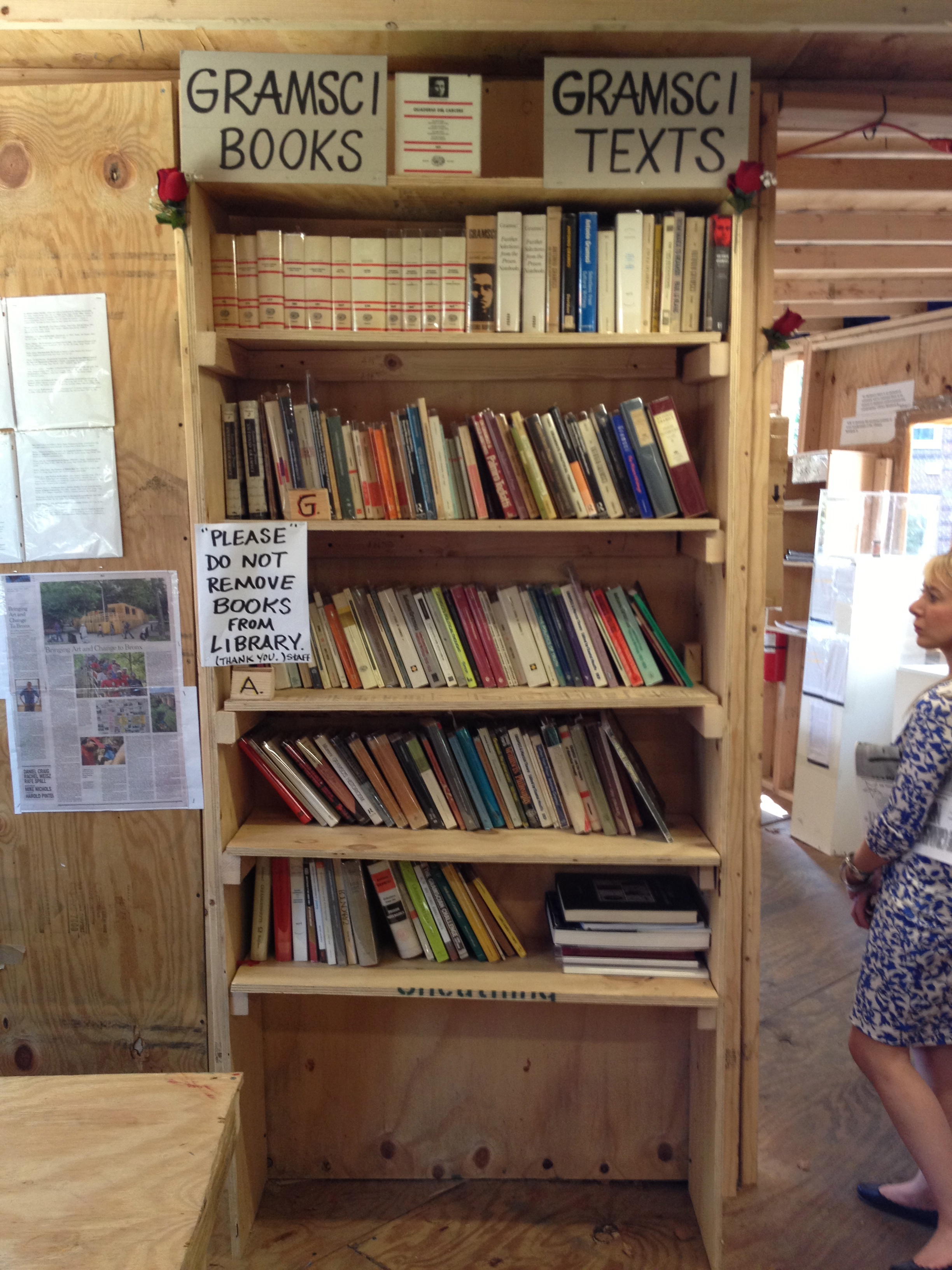 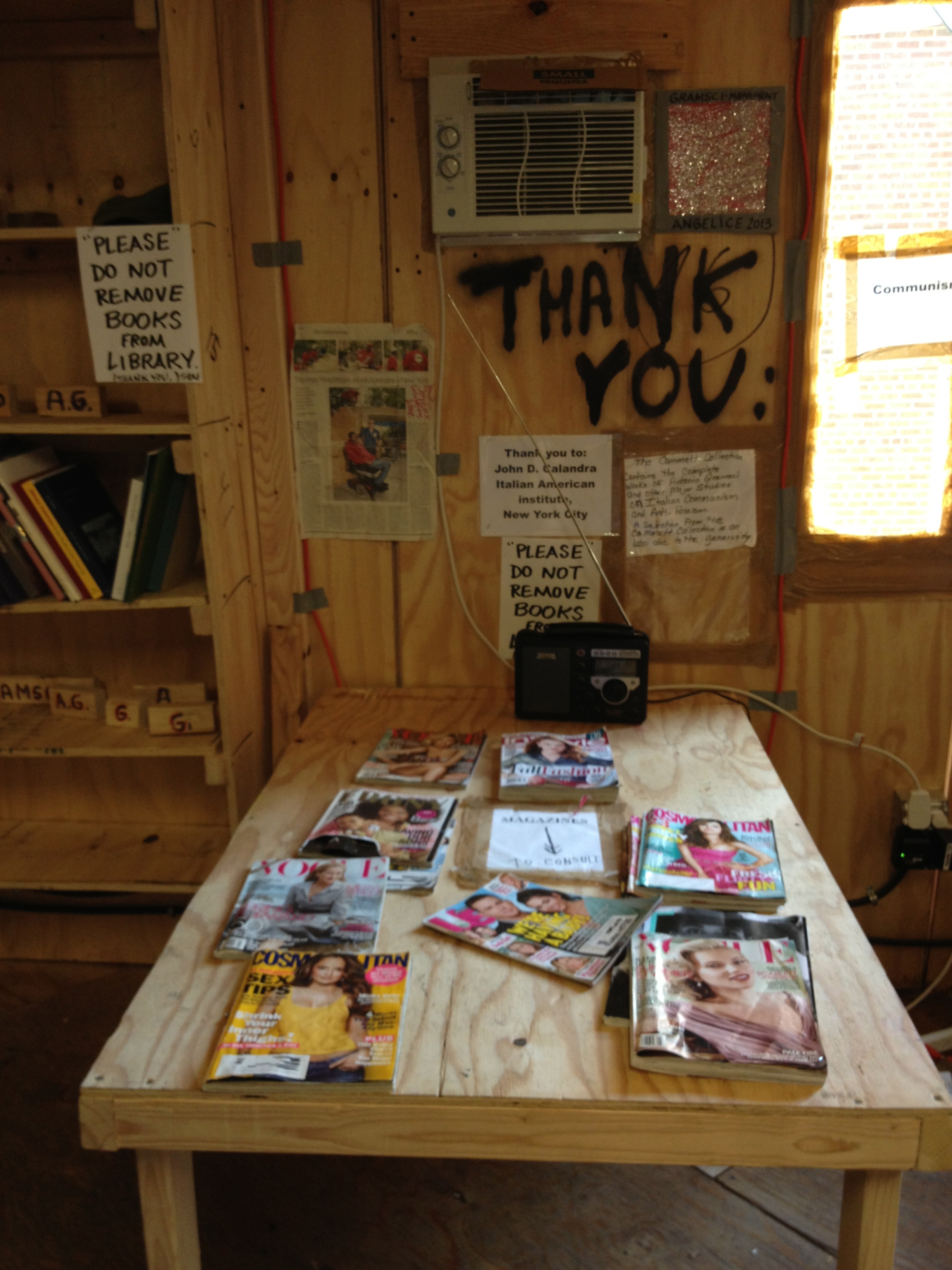 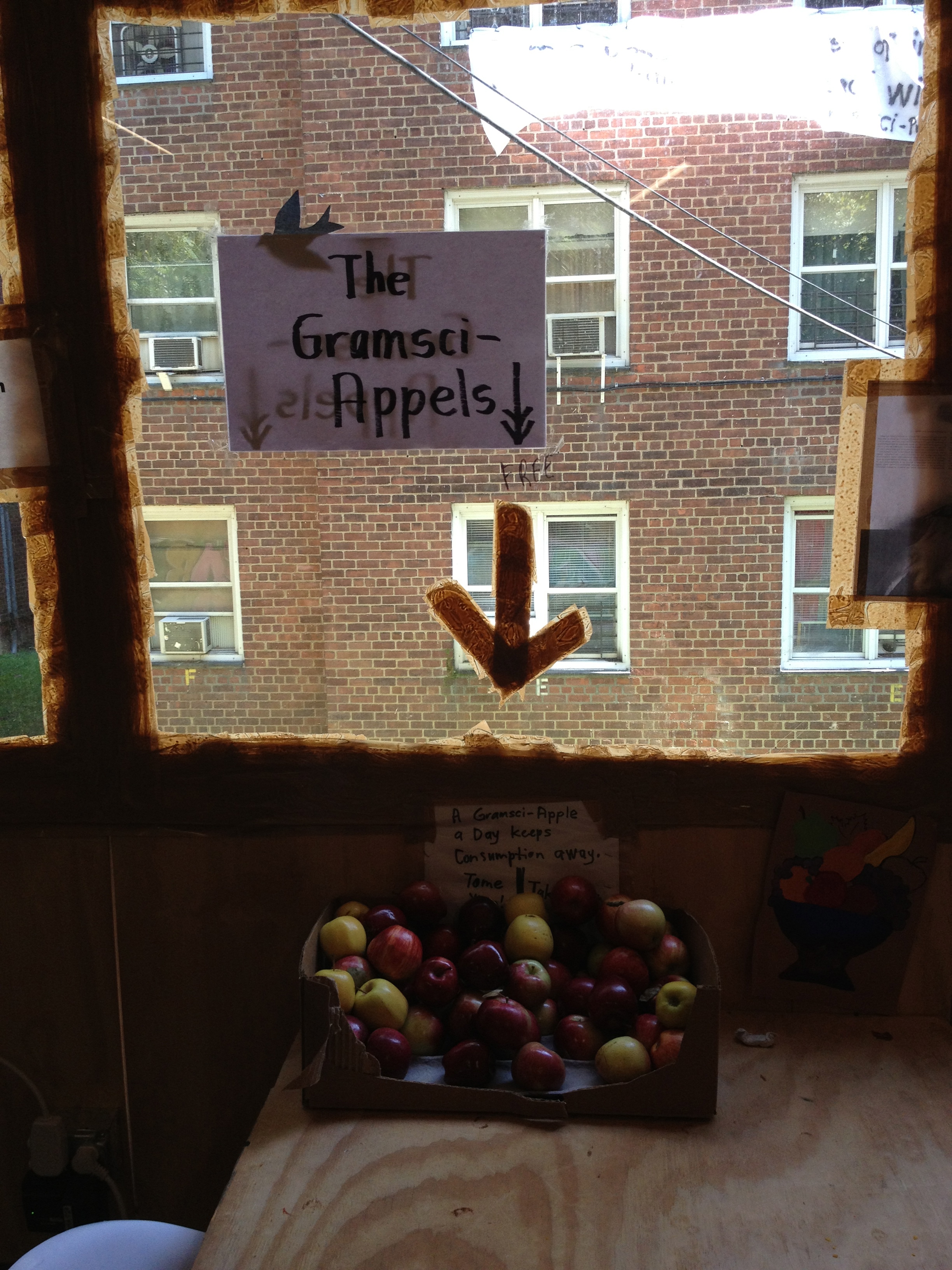 We’re not simply remixing and repurposing found texts and images and constructing readymades; nor are we simply rearranging archival materials. We’re also generating new materials, new knowledge, as is evidenced in the daily newspaper and ongoing radio broadcasts. While I was there, a group comprised of at least one Forest Houses resident, a former police officer, and an official Gramsci Monument worker (possibly a Forest Houses resident, too) spoke on-air about police brutality and stop and frisk, while periodically evoking Gramsci. 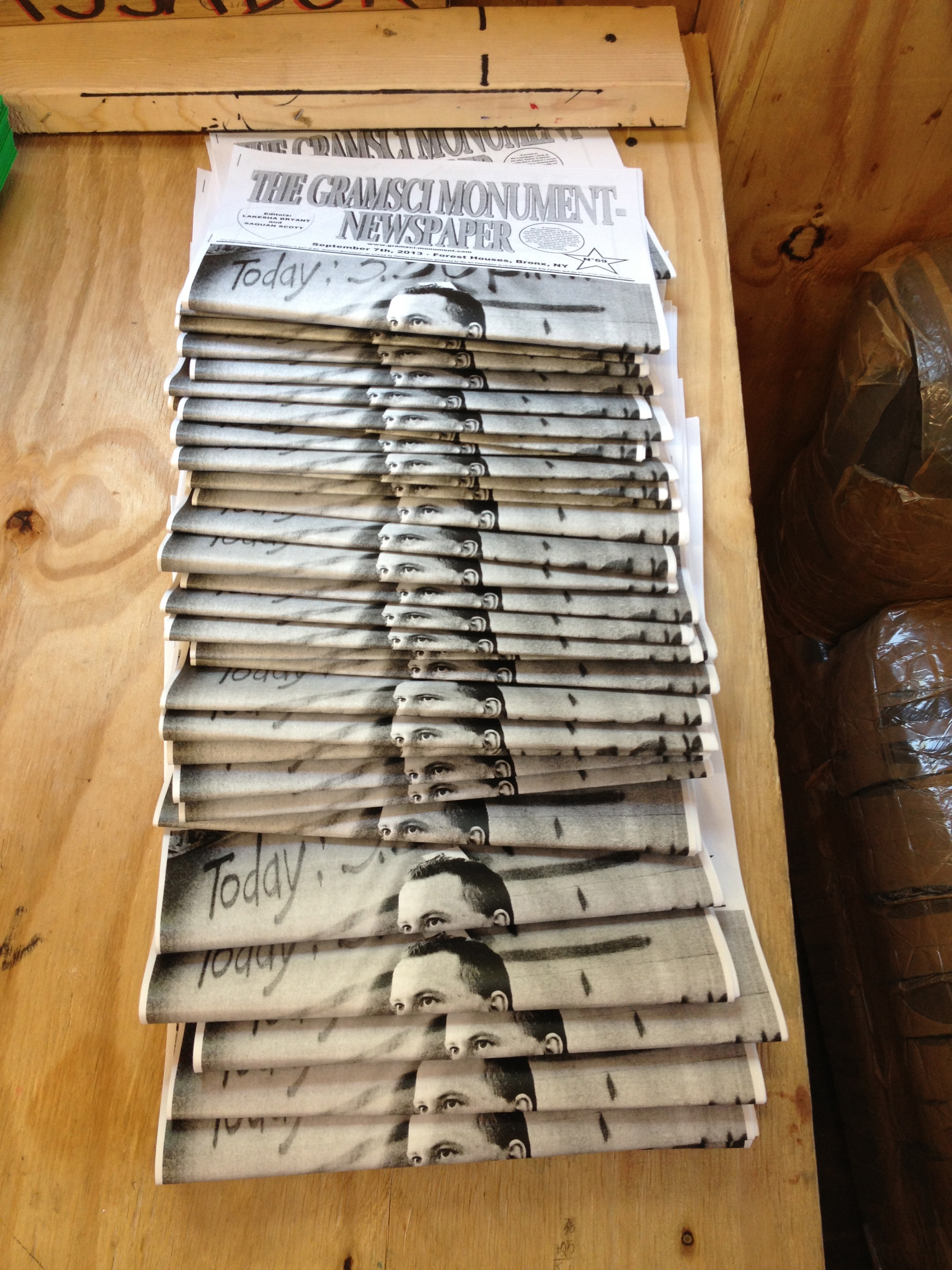 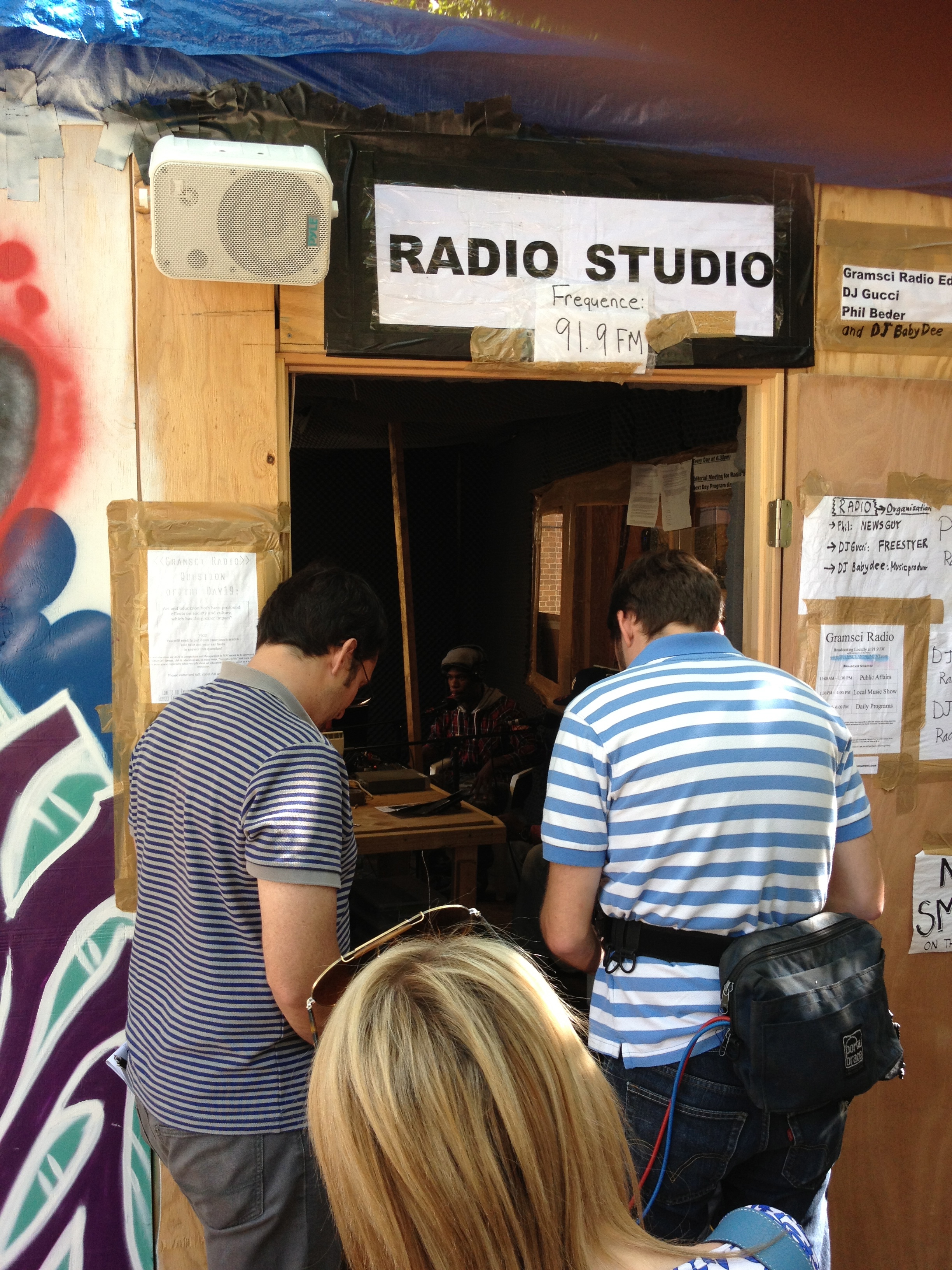 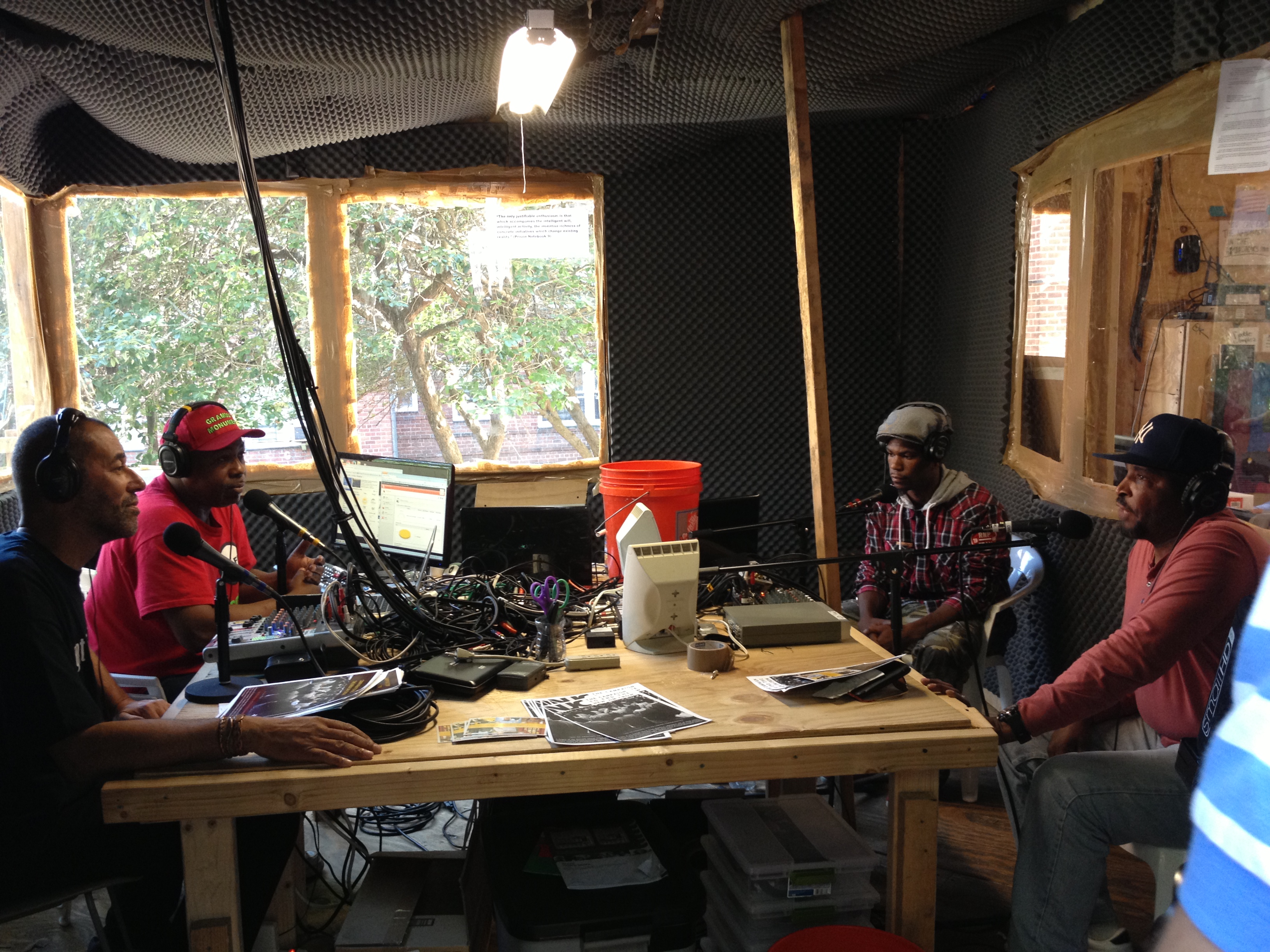 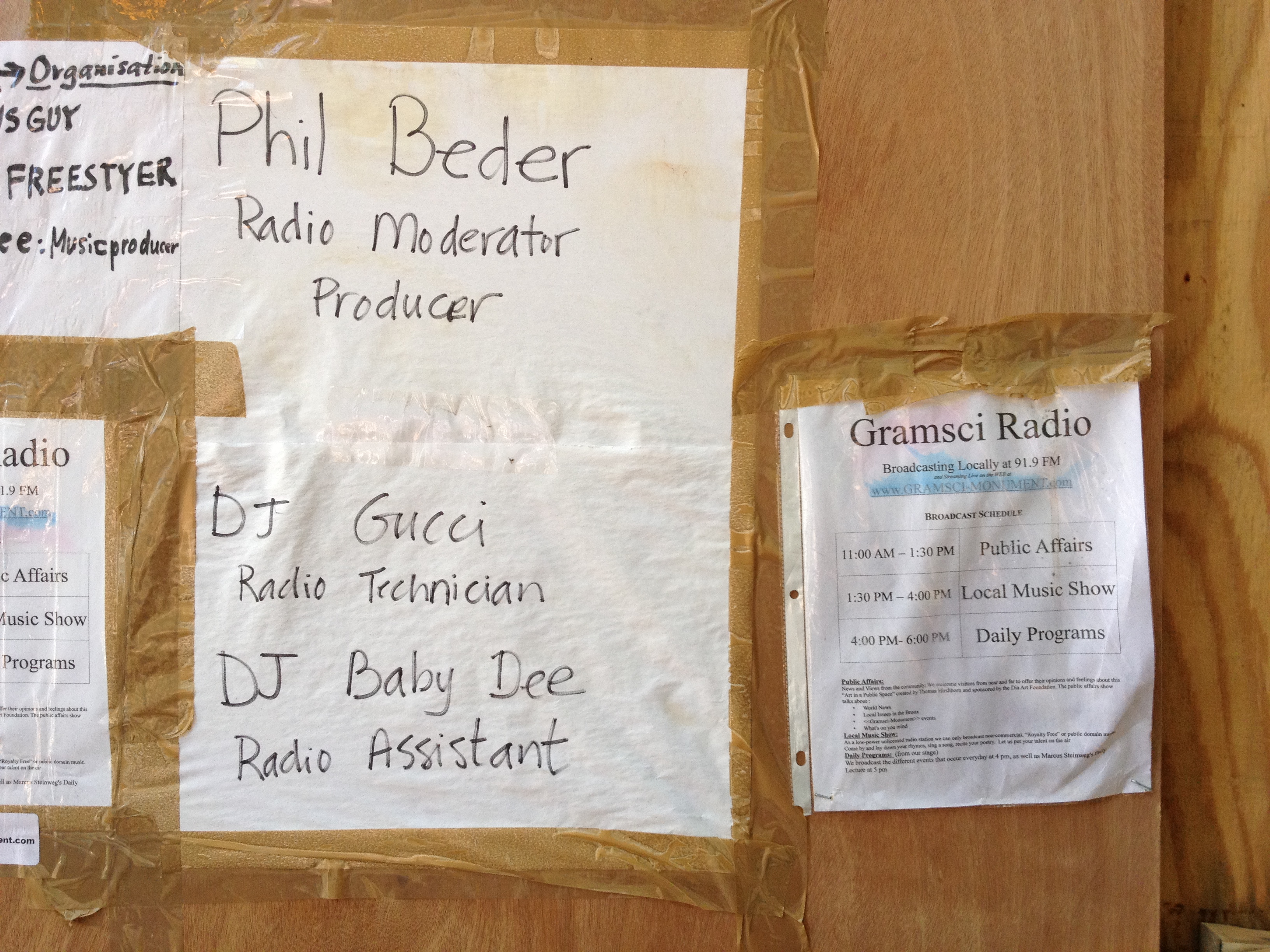 The Gramsci Monument is the fourth and final of Hirschhorn’s monuments; others for Spinoza, Bataille, and Deleuze appeared, for the most part, in the philosophers’ home countries, but apart from “official sites.” Gramsci gets stuck in the U.S., but he, too, is removed from its cultural capitals and finds himself situated in the Bronx. As Foster explains, “the radical status of the guest philosopher is matched by the minor status of the host community, and the encounter suggests a temporary refunctioning of the monument from a univocal structure that obscures antagonisms (philosophical and political, social and economic) to a counter hegemonic archive that might be used to articulate such differences” (9). More broadly, Hirschhorn “wants to expose different audiences to alternative archives of public culture, and to charge this relationship with affect” — with a mix of “love” and “politics,” as proclaimed on the basketball hoops pictured at the top of this post (7). “Hirschhorn applies these mixed means to incite his audience to (re)invest in radical practices of art, literature and philosophy — to produce a cultural cathexis based not on official taste, vanguard literacy, or critical correctness, but on political use-value driven by artistic love-value” (10).

As much as I admire the mission, I just can’t help but read condescension in the rhetoric. I can’t get over that reference to the local population’s “minor status.” I can’t help but wonder if the Times‘s Ken Johnson is right: if the Gramsci Monument is just “another monument to [Hirschhorn’s] monumental ego.” Yet in reading through the Monument’s extraordinarily text-heavy poster-size program, I found that Hirschhorn explains his relationship to the community in terms that are a bit less patronizing and actually rather redeeming:

I never use the term ‘participatory art’ in referring to my work, because someone looking at an Ingres painting, for instance, is participating, even without anyone noticing. I never use the terms ‘educational art’ or ‘community art,’ and my work has never had anything to do with ‘relational aesthetics.’ The Other has no specific ties with aesthetics. To address a ‘non-exclusive’ audience means to face reality, failure, unsuccessfulnesss, the cruelty of disinterest, and the incommensurability of a complex situation. Participation cannot be a goal, participation cannot be an aim, participation can only be a lucky outcome.

Participation here comes in many forms. As Hirschhorn admits, “I do not distinguish between a person who could be a ‘receptive participant’ and the person ‘hanging around.'” They’re all participating, and those myriad forms of participation are validated. Art F City recently featured an illuminating (for me) post by Whitney Kimball and Will Brand that drove this point home. They write:

The purpose of combining a computer room, art studio, radio station, newspaper room, philosophy library, kiddie pool, snack bar, and an open mic stage, is to validate any group cultural experience. Copies of People magazine sit across from a bookshelf of Marxist literature. A photo wall titled “Every book is important” shows kids holding up their favorite books, from textbooks to chick lit. It’s a living embodiment of Gramsci’s desire for proletariat liberation from cultural hegemony, and his credo: “Every human being is an intellectual.”

That liberation comes in many forms. Kimball and Brand’s article featured several interviews with local residents. Dannion Jordan, who was on the paid construction team, said, “You work on something like this, and after a while it’s not like a job…. You start thinking it’s your thing, too. I mean, I’m no artist, but I’m making a work of art here.” Forest Houses’ Erik Farmer explained to Kennedy that, while for Hirschhorn the project is a work of art, “[f]or me, it’s a man-made community center. And if it changes something here, even slightly, well, you know, that’s going in the right direction.” Local resident Cash explained, “The way I see it is they provided fifty jobs to the community, for one. For two, everybody looks forward to coming here. If it were up to me, I would have this every year.” Another resident said, “It kept people busy, people out of trouble. And focused on something positive instead of negative. You could tell there was a change.” And yet another experienced an aesthetic liberation: “And this is art. I never realized that art…it really changed my idea of what art could be. Art could be anything.” So can an intellectual.

Update 10/13: Hyperallergic returned to Forest Houses to interview residents regarding their own experiences with the project. 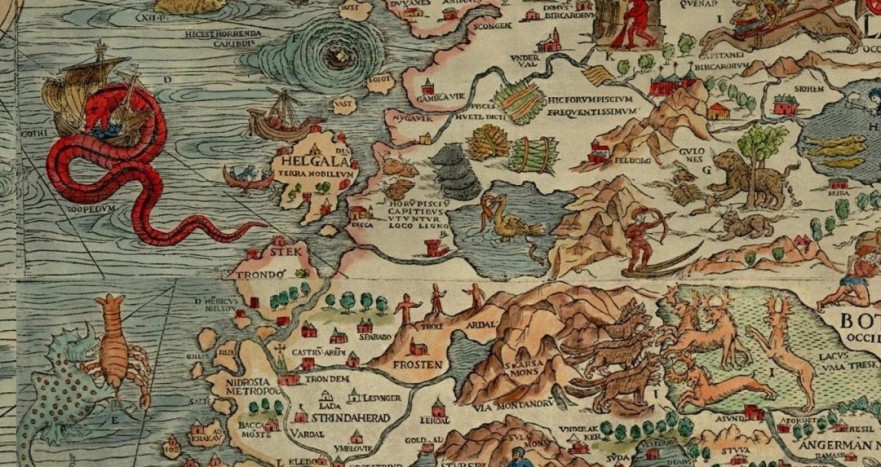 In keeping with annual tradition, students in this fall’s Urban Media Archaeology class will be reviewing a selection of maps and assessing what they illuminate and obfuscate, how they integrate form and content effectively and poorly, whether or not they serve their intended purpose, and what lessons we can take away from them and apply, or avoid, in our own mapping projects.Three years ago I developed a preliminary round-up of map critique resources, and now that we’ve had a few semesters’ practice, I thought it was time to revisit that post.

If we look at maps as multimodal media, we realize we can use some of the same critical lenses we use within media studies to critique any of a variety of media texts — films, graphic designs, interfaces, magazines, apps, etc. — and apply those lenses to maps. Let’s start with a (seemingly) easy one:

What’s on the map?

Who made this map?

Who is/are the map’s audience(s)?

How was the map made?

What are the map’s materiality and form?

What editorial choices informed how that content was presented?