Two weeks ago I had the pleasure of attending and delivering one of the keynotes at the Spectacular / Ordinary / Contested Media City Conference in Helsinki. While there were three productive and inspiring days of presentations, a few talks stood out for me — either because they intersected with my own interests, or because they introduced me to new interests and new people whose work I’m now eager to follow.

First, Paulina Mickiewicz, who’s finishing up a dissertation at McGill on the Grande Bibliothèque du Québec in Montreal — and whom I’ve had the pleasure of meeting on a few occasions both online and in-person — gave a lovely presentation on the social roles played by branch libraries in Canada (although her argument applies to branches in the U.S. and elsewhere, too). She argued that these spaces represent a shift in the library’s mission from instruction to empowerment, from “custodialism to interfacing,” and toward the promotion of citizens engaged in “indefinite learning” (i.e., life-long, self-directed learning). These neighborhood libraries also find themselves filling in the gaps in-between other cultural and educational institutions. Of course we could say that branches have always served these roles — but perhaps, as urban library systems continually have to justify themselves in order to secure necessary funding, they need to make clear the specific roles played by the various nodes within the library network, including the central library and the branches. We could say that our branches are particularly well equipped to serve the particular needs of their particular communities. And Paulina illuminated those needs through a few case studies.

I was very happy to meet Rebecca Ross, who’s doing some fabulous work on graphic design, urban space, and spatial data at Central Saint Martins in London. She presented her research on UK postal codes as both a precise spatial marker and a more qualitative expression of “placeness.” In their hybrid legibility, whereby they make themselves readable by both humans and machines, the codes mix “technical robustness” and “cultural resonance” — and, at the same time, render interactions between infrastructure and culture transparent.

Ross recounted the fascinating history of the codes’ evolution. My notes on the deep history are somewhat sketchy, but I do recall that in the 1850s and 60s — when there were 62 George streets in London — the post office attempted to rationalize addresses by giving streets unique names, and assigning to houses unique ordered numbers. These changes were met with resistance, particularly by the wealthy, who wanted to maintain the prestige that came with particular addresses. The city was then divided up into zones based on the postal workers’ delivery routes, and Royal Mail added metadata to addresses, thus transforming these spatial descriptors into a “direct interface” to an “increasingly systematized and mechanized” mail delivery infrastructure. The coding system became more precise, postal customers had to become more disciplined in addressing their letters, and new mail sorting techniques were developed. (In relaying this history, Ross also noted the Royal Mail’s great filmmaking tradition.)

Today, the postal code prefixes “brand” London neighborhoods, and businesses in desirable areas of the city proudly display their codes on their business signs. Parents often jockey to position themselves in good postal zones in order to have access to good schools. This is just one example, Ross says, of how postcodes are not merely descriptive; they actually play an active role in shaping the urban environment. Perhaps it’s already apparent, but I should note that Ross’s presentation — and getting to know her afterward — were among the highlights of the conference for me.

Monica Degen, from Brunel University in the UK, later spoke about the work she’s doing with Gillian Rose and Clare Melhuish on the use of computer-generated imagery in urban development projects. She argued that within the “experience economy” architecture is increasingly called upon to create “experiences,” cultivate “atmospheres,” and deliver sense(s) of place — ideally, places that are “beyond history.” CGI is one means of creating and marketing those atmospheres to various publics.

Degen and her colleagues investigated a development project based in Doha, Qatar, but overseen by a UK-based firm. Local backers insisted that “we don’t want to be the new Dubai; we want our own Qatari identity” (In my 2008 Public Culture article on Qatari nation-branding-through-typography, I found a similar desire to set oneself apart from other emirate brands — particularly Dubai’s Vegas-esque identity). In order to craft that identity, the UK firm appointed an “architectural language advisor,” who served as an “orchestrator of place-making” — and CGI was one element of that orchestration. The project imagery took shape through a succession of stages: modeling, terrain compositing, scene compositing, materials and textures, lighting, the “raw render,” then the final image. Through this series of revisions, the designers and artists were particularly concerned with “getting the light and weather right”; early versions of the Doha renderings didn’t seem to capture the appropriate illumination, so artists used “Spanish light” to engender the “right” atmosphere. In order to convey a sense of public life, Degen said, the design team also inserted CGI-ed people on bikes, even though it’s “too hot to be outside” in Doha.

Through this evolutionary process, “[e]very image refers to another image… that comes before it and that is itself transformed, yet again, by another inscription down the road thus forming long cascades of successive traces,” wrote Bruno Latour in “The More Manipulations, the Better.” Those successive traces amount to a significant material accumulation, as is evidenced by the piles of printouts in the designers’ offices, and their proliferating versions of the same digital files. Again, Latour: “everything that before had melted into air has become fully incarnated.

Clancy Wilmott, a PhD student from Manchester, offered a beautiful presentation on “hauntings” (particularly of the postcolonial kind) in digital maps. Wilmott, who is part of a major UK-based cartography research project, began by noting that when we categorize maps, we tend to group them by historical period, in the same way that we compartmentalize art history, rather than by looking at how a single place’s cartographic representation evolves through time. This recognition has inspired her own investigation of Australian cartography, and the absences, silences, and (following Avery Gordon) hauntings that appear, or don’t appear, in colonial and postcolonial maps (and even in the landscape that preceded cartographic representations). Wilmott noted particular features of Australia’s physical landscape — vertical rocks, for instance — that confounded its settlers; these aspects of the “deviant landscape” were marked as “outliers” and thus excluded from their maps. Conversely, contemporary residents might note dissonances between their embodied experiences of the landscape, and representations of that landscape on their mobile phones; in particular, they might encounter in the physical terrain various traces of colonialism that are excluded from official maps. I wonder if, rather than trying to integrate those “ghosts” into the map, we should conserve the unheimlich nature of the digital map — maintain the disjuncture between the map and the territory — so as to highlight those scars and hauntings.

Extending the haunting, Esther Lorenz from UVA addressed spatial representations of jianghu — which has been described variously as having something to do with anxiety, bewilderment, or the “other than home” — in Hong Kong cinema. The tavern, she said, commonly serves in these films as a connector between home and spaces of jianghu. Meanwhile, rooftops and infrastructural spaces (e.g., bridges, walkways), which we might typically regard as unheimlich “non-places,” function instead in Hong Kong cinema as spaces of freedom, offering alternatives to the regulatory spaces of the city. There’s also a very practical reason why these particular spaces are common shooting locations: few permits are required to shoot here. Nevertheless, these “other spaces” allow us to reclaim the uncanny, the non-place, as a space of possibility and hope. 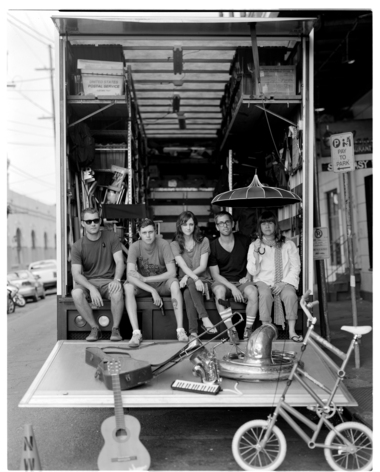 Finally, Helen Morgan Parmett offered a remarkable presentation on the politics of on-location shooting for HBO’s Treme. Because I’ve already spent way too long on this post — and because I took an awful lot of notes on Helen’s talk, far too many for me to try to distill into coherent paragraphs — I’ll simply post my unedited notes below: