The exhausting ubiquity of data visualizations has made it clear that data have the potential to be aesthetic entities. One common critique of these visualizations, though, is that while they may make the analysis of data or presentation of research findings more intelligible, or differently intelligible, to a wider audience, there’s often little transparency regarding where those data came from, or the methodologies through which they are derived.

Methodology itself, or perhaps I should say methods themselves (there’s a difference between methods and methodologies, which we’ll get to later), now seem to be getting stylized. I’ve seen lots of projects in recent years — most coming from citizen science, public labs, and related design research — that relish in the aesthetics of measurement. Folks seem to be fascinated by the sensory and affective dimensions of measuring things — the fact that measurement isn’t a purely objective task — and, to feed their passion, they’re designing a host of measurement tools as objects d’art: lovely little bento boxes of tools, fanciful surveying equipment, deliciously weird Tom Sachs-ish visioning machines.

Speaking of Sachs, we can certainly see the influence of his own modus operandi, knolling, in many of these projects. 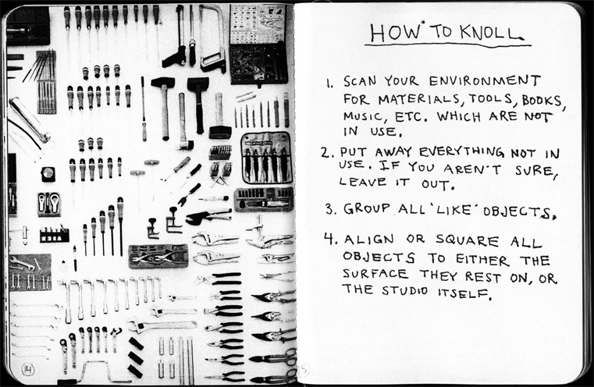 Consider Venue, “a portable media rig, interview studio, multi-format event platform, and forward-operating landscape research base” that’s touring the continent from summer 2012 through fall 2013 “to document often overlooked yet fascinating sites through the eyes of the innovators, trendsetters, entrepreneurs, and designers at the forefront of ideas today.” By “record[ing] and survey[ing] each [visitation] site through an array of both analog and high-tech instruments” (about whose specific methodological functions I’d love to know more), the Venue team aims to “assemble a cumulative, participatory, and media-rich core sample of the greater North American landscape.” They’re pastiching tools and methods from journalism and geology — and, in the process, making data-collection and measurement an aesthetic endeavor.

Consider also the Los Angeles Urban Rangers’ 2006 Interstate: The American Road Trip project, which was “intended to facilitate sharpened observational skills for reading 21st century roadside geographies, particularly in light of the ever-increasing standardization of the American landscape.” A key component of the project was their Interstate Road Trip Specialist Field Kit, an objet d’art in itself. Yet that kit contained tools whose methodological utility was explained in an accompanying Field Guide [the following is drawn from my forthcoming article on “Infrastructural Tourism]
: 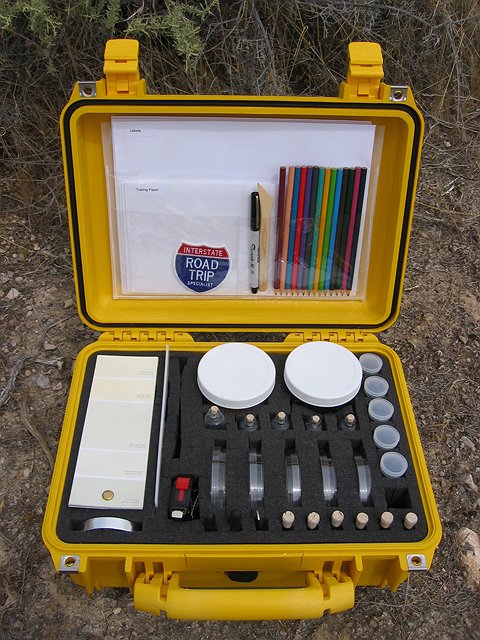 BLDGBLOG also wrote recently about a design research project, set in the Arctic, that made use of a range of beautiful, custom-designed surveying instruments — including tools for examining “perception and interpretation of the aurora borealis,” for “testing sound absorption qualities of snow” and “insulation properties and light transmission” of ice tiles, etc.

There’s a long history of scientists and architects building their own tools, but the whole world of “research architecture” — architects as geologists and meteorologists and botanists who “architect” their own scientific instruments — seems to be newly prevalent (but of course we also have plenty of historical examples of polymath experimental designers). We might trace threads in the lineage for these recent “toolkit” projects back to Fluxus game kits, and to the use of cultural probes in design research and urban probes in urban computing research. Eric Paulos and Tom Jenkins explain that the latter are “designed to bypass many classical design approaches – opting instead for rapid, nimble, often intentional encroachments on urban places rather than following a series of typical design iteration cycles.” In short, probes are a “fail-fast approach,” a means of “conducting rapid urban application discovery and evaluation metrics.” You don’t often go in knowing precisely what you’re looking for, but you’re hoping that innovative tools will yield some interesting data. Many of these designerly toolkits are probe-like, speculative, in this regard.

These examples demonstrate that measurement has an aesthetic — one that seems to follow from the aesthetics of administration, archival aesthetics, and work that takes cues from the aesthetics of the lab. Circuit bending and the “hack-” or “make your own tools” movements have undoubtedly inspired these projects, too. But still, I wonder what, in this age of sentient technologies and Big Data, made measurement — often with analogue tools — so cool, so worth aestheticizing. Perhaps it’s in part because, in contrast with all the machines automatically harvesting mountains of data, these toolkits allow for a more “slow,” intentional, reflective, site-specific, embodied means of engaging with research sites and subjects.

In the appendix to his 2010 Political Aesthetics (Cornell), Crispin Sartwell proposes 52 potential research projects that would “encourage the greatest possible variety of methodologies.” Proposal #2 is a study of the “political aesthetics of measurement.” That’s precisely what we need here. We’ve touched a bit on the aesthetics, but what are the politics in play?

Similarly, I think we need to think about the relationships between (1) data collection, which seems to be foregrounded in many of these toolkit projects; (2) method; and (3) methodology. Sometimes, as I see with my students, concern with the aesthetics of measurement overpowers considerations of how that measurement functions as a method. Methods refer to “the techniques or procedures used to gather and analyze data related to some research question or hypotheses.” Methodology refers to the “strategy, plan of action, process or design lying behind the choice and use of particular methods; and the connection of the choice and use of methods to the desired outcomes” (Crotty 1998: 3).

Sure, we can use tools for tools’ sake and gather data in an exploratory fashion, as part of speculative research. But it might also be useful to think harder about what it all adds up to — or what we want it all to add up to — and select our tools in support of those larger epistemological and theoretical goals. We’ve already acknowledged the myriad ethical and methodological challenges of harvesting data for data’s sake — which we often do simply because we can, because the technologies are there that allow us to do this.There’s talk in both the Big Data and citizen science worlds of ensuring that data collection is committed to producing actionable data, which implies having an end-goal or larger purpose in mind.

I’m certainly not an expert in the data science or hard science worlds. But I do work in fields in which the methods and ideals of “scientific” data collection have a growing appeal. And sometimes the most readily apparent or accessible way — for students in particular — to gain entry to those complex practices is to take on the aesthetics of measurement. This isn’t to say that engagement with the affective or stylistic dimensions of measurement precludes engagement with its larger methodological functions — rather, that I hope these concerns are brought into alignment: that the packaging suits the purpose, the form serves the function, the knolling serves the knowledge.

To separate these concerns, and to focus only on measurement for measurement’s sake — or its scientific “look” — feels a bit like methodolatry, a neologism composed, as you might expect, by mixing “method” and “idolatry.” Janesick (1994) defines methodolatry as “a preoccupation with selecting and defending methods to the exclusion of the actual substance of the story being told.” One manifestation of methodolatry is the fetishization of method, or a preoccupation with method to the extent that it directs one’s research, perhaps even driving the questions one asks (e.g., some scientists speak of the “worship of the clinical trial”). Another manifestation could be the idolization of method — the adoration of measurement’s image or representation: the knolled toolbox, the hacked perceptual machines, the scientific flowchart, as kit of tricks.

Or perhaps these methadolatrous projects, in their aestheticization of measurement, are calling our attention to presumptions about scientific rigor, parodying our algorithmic impulses, tacitly asking questions about the ideology of a pervasive culture of measurement and assessment.