In my previous post I addressed two recent exhibitions that examine the aesthetics of the analogue stack. Here’s a third, which I thought warranted its own post:

For months I’ve been eagerly awaiting the opening of the Henri Labrouste exhibition, the first American solo exhibition of the architect’s work, at MoMA. I first encountered Labrouste in grad school, when architectural historian Jean-Louis Cohen (before he became a member of my dissertation committee) encouraged me to study both Louis Kahn’s library at Phillips Exeter Academy and Dominique Perrault’s design for the new Bibliothèque Nationale de France — which required that I also know a bit about Labrouste’s design for the original BNF (1859 – 1875). Labrouste is best known for this library and an earlier one: the Bibliothèque Sainte-Geneviève (1838 – 1850), also in Paris. 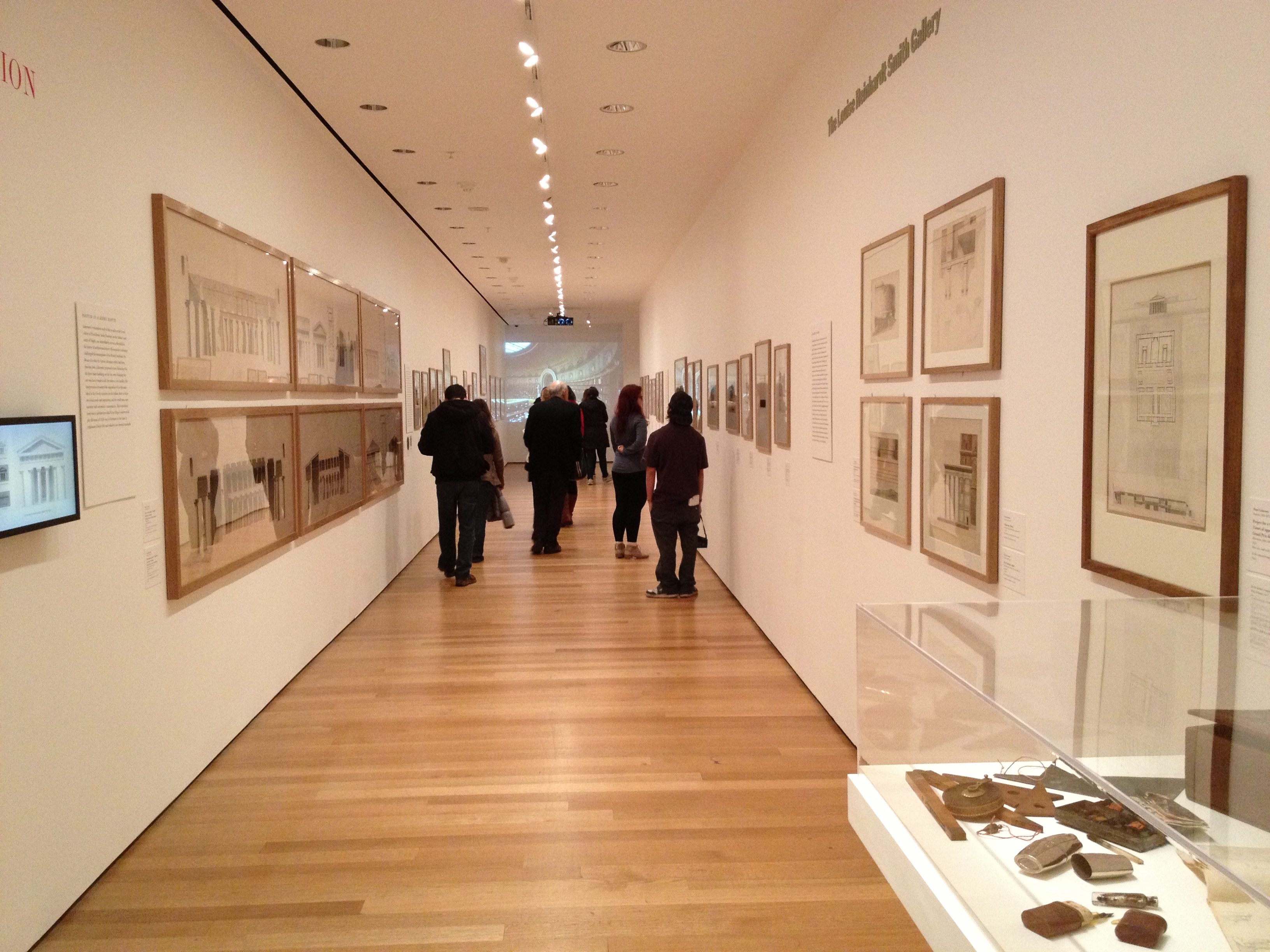 The exhibition represents a fabulous feat of scholarship, much of which is captured in the formidable catalogue. There’s little I can add to what the eminent architectural historian Barry Bergdoll and his equally esteemed colleagues have already said — about Labrouste’s role as a progenitor to modernism; his rational use of iron; his taste for ornament, particularly ornamental iron work, stone inscriptions, and symbolic iconography — either in the exhibition or in the book.

But I do want to highlight a few related dimensions of Labrouste’s libraries: his sensitivity to the reading experience; to ambiance, even in the stacks; and to what Martin Bressani, in his essay in the exhibition catalogue, calls a “healing architecture.” These “healing” properties can be interpreted rather literally in some of Labrouste’s other projects, including an asylum and a prison. In regard to the Cantonal Asylum in Lausanne, Labrouste, concerned with the “well-being and soothing of the sick people,”

examined a series of environmental factors affecting their well-being: a pleasant view of the countryside, a good amount of sunlight, continuous circulation of air, protection from noise, and the presence of gardens or greenery in each of the quarters. He even foresees a rudimentary sort of air conditioning… (“The Bibliothèque Sainte-Geneviève and ‘Healing’ Architecture” In Barry Bergdoll et. al. Henri Labrouste: Structure Brought to Light: 98)

“Healing,” in regard to the libraries, translated into something more akin to the progressive era ideals that inspired Carnegie-era libraries. The Bibliothèque Sainte-Geneviève was “the only place for study in Paris that remained open after nightfall, thanks to its gas lighting and central heating,” and it “helped maintain order in a Latin Quarter peopled with students who, when they could not stay at home in the evening ‘for lack of fire and light,’ were liable to give in ‘to dissipation and debauchery'” (Bressani 104). While the atmosphere may have been intended to “heal” patrons from temptations to sin, it still represented Labrouste’s attention to the embodied experience of architecture, and of study. 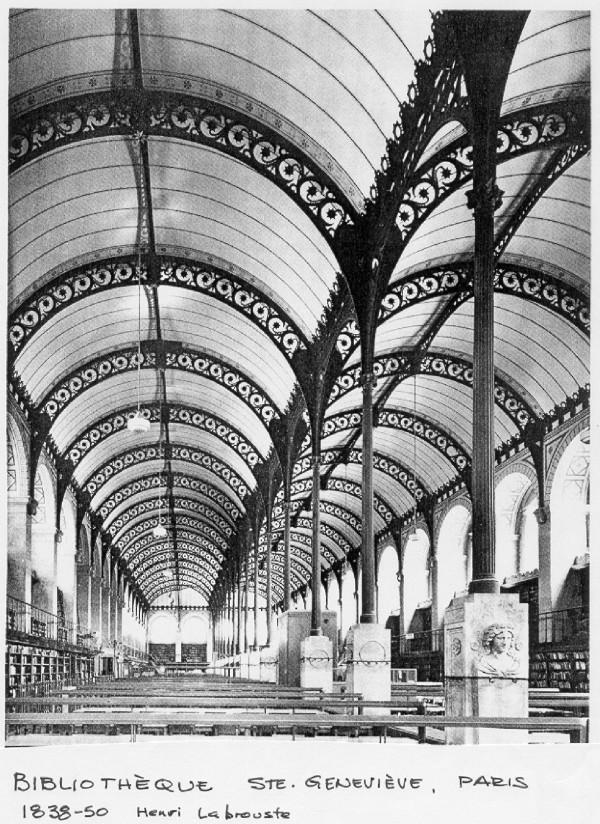 He was particularly interested in the transition from day to night, and the theme of illumination was instantiated in a variety of ways — through windows, candelabras, ornament, color — throughout the building. There’s much discussion in the catalogue of Labrouste’s “mastery of climate using new technologies for lighting, heat, and ventilation (pp. 110-15) — but these environmental factors represented far more than mere creature comforts; they were also meant to have intellectual, pedagogical effects. The “atmospheric dress” of the building could “offer a powerful metaphor for the paths of knowledge, leading to utopian thought” (115). Iconography, circulation, illumination, etc. are designed to evoke “the fertile ground of the imagination” (116).

In “The Book and the Building,” an essay I’ve been using in my Media + Architecture class for the past several years, architectural historian Neil Levine writes beautifully about the literary ornamentation of Sainte-Geneviève — how decorative elements “appliqued or printed on the surface… [make] the building look as if it had just rolled off the presses” (In Robin Middleton, The Beaux-Arts and Nineteenth-Century French Architecture: 155). The building itself is thus a book: the facade, with all its literary ornamentation, functions as a sort of library catalogue; and the interior, as one big, inhabitable bookcase (156). Levine’s argument blew my mind when I first encountered it — and I continue to enjoy exploring his essay with my students.

There’s much more to be said here, but rather than saying it — and risking another obnoxiously long blog post (oops! I’m already there!) — I’ll instead refer you to Marc LeCoeur’s catalogue essay on the Bibliothèque Nationale, for which Labrouste used a slightly different set of tools to cultivate this “fertile ground”; and Levine’s catalogue essay on Labrouste’s libraries’ arrival “at the dawn of the new library science.” Levine pays a great deal of attention to the stacks themselves, which were treated differently in the two libraries. In the Bibliothèque Sainte-Geneviève, for instance,

students…, seated at long tables between parallel rows of books, …would have felt enclosed by them, as if in a more domestically scaled, individually oriented ‘cabinet de lecture.’ The books themselves thus defined the space at the level they were read, while visually receding in perspective to the plane of the shelving under the arcade windows and becoming, as Labrouste wrote, “the most beautiful ornament of the interior” (170).

It’s worth noting that this “fertile ground of imagination” isn’t purely symbolic; it also happened to constitute a very pleasant place for reading books. Labrouste cared about readers reading. And Bergdoll et. al. attempted to recapture some degree of the experience of reading in Sainte-Geneviève by commissioning drafting tables, modeled after Labrouste’s designs for the library, on which the curators displayed drawings of the libraries. However much I appreciate this gesture — to approximate the feel of reading at one of Labrouste’s tables — I do think the exhibition as a whole is bit too cerebral an experience for an architect so concerned with multisensory comfort, “atmospheric dress,” ambiance. The lighting’s a bit too impersonal, the colors a bit too clinical, and the non-visual senses aren’t engaged much. 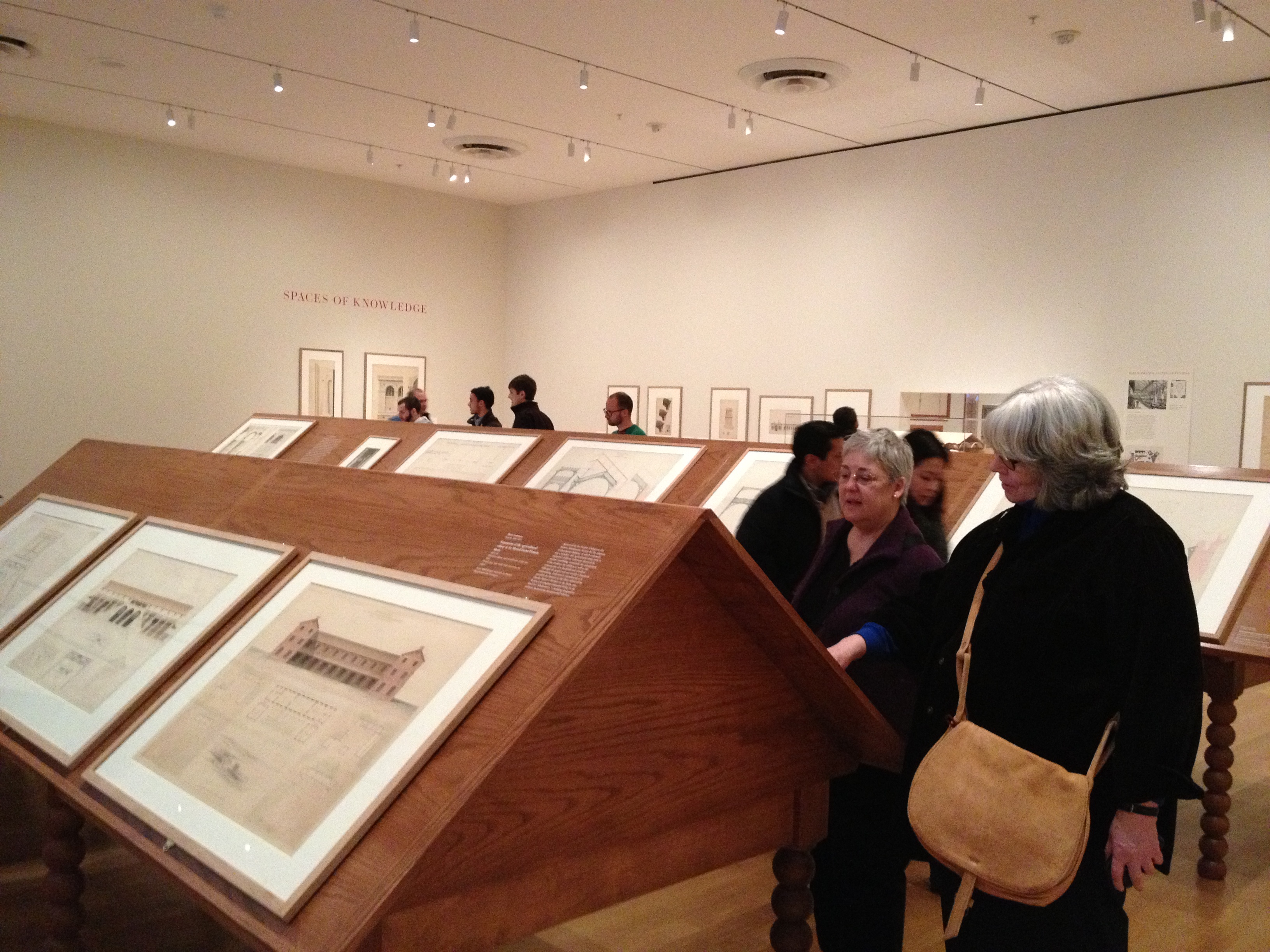 Michael Kimmelman, who reviewed the show this past Thursday for the Times, notes that “the exhibition’s arrival seems almost uncanny in the midst of the debate over the renovation of Carrère and Hastings’ New York Public Library building at 42nd Street, whose iron book stacks derive from Labrouste’s.” Kimmelman has been rather vocal in his criticism of the current NYPL administration’s plans, and of Norman Foster’s proposed designs for the renovation:

Library officials have proposed removing those historic stacks, which support the main reading room, and replacing them with a circulating branch to be designed by Norman Foster. The stacks, they say, are too dilapidated and unsuited to be modernized.

But Labrouste’s even-older stacks at the Bibliothèque Nationale have recently been outfitted with modern climate controls and fireproofing and will be opened to the reading public. The exhibition’s last room greets visitors with a large photomural of that space — a pointed rebuke to those New York library officials who haven’t adequately justified their scheme and might now want to investigate more closely what Paris is doing…

But we also have to avoid fetishizing the stacks, and remember how carefully Labrouste considered their integration into the overall library experience — how the stacks, and the books on them, positioned themselves in relation to readers to foster a particular ambiance. And we need to recall Labrouste’s more socially significant accomplishments; as MoMA puts it:

Labrouste made an invaluable impact on 19th-century architecture through his exploration of new paradigms of space, materials, and luminosity in places of great public assembly.

His many architectural innovations were in service of creating “places of great public assembly.” As it has been for over a century, the NYPL is of course one such space, but the proposed renovations — however much in need of revision they might be in their current state — are intended, ostensibly, to make the library an even more inclusive public space, by bringing in the circulating collection from the Mid-Manhattan branch, by making more spaces for people to inhabit. We have to find a way to balance these social obligations, with our appreciation of the stacks as an “engineering landmark,” as Ada Louise Huxtable noted in (one of her?) her last column(s) for the Wall Street Journal. As I’ve seen in so many library renovation projects around the country, it often comes down to a compromise between (1) protecting historically significant architecture and (2) creating a building that better serves its contemporary publics. Sometimes, honestly, landmark architecture — whose value we cannot deny — is an albatross around the neck of an institution that needs to continually adapt to meet its social obligations.

‘The facade… functions as a sort of library catalogue; and the interior, as one big, inhabitable bookcase’: http://t.co/DoGhPT4NgY