Geez Louise, is the Wall Street Journal ever into libraries. Or so it seems, based on the amount of coverage libraries have received in these first two weeks of the new year. Of course they closed out the old year with Ada Louise Huxtable’s last-ever critique, a take-down of Norman Foster’s proposed renovation of the 42nd Street New York Public Library:

This is a plan devised out of a profound ignorance of or willful disregard for not only the library’s original concept and design, but also the folly of altering its meaning and mission and compromising its historical and architectural integrity. You don’t “update” a masterpiece.

There’s something perfect about Huxtable’s career ending with a look at one of New York’s most magnificent public spaces — but I, for one, can’t say that this was Huxtable’s most magnificent piece; she focused more on the presumed mission of the library than on the architecture, and I think her characterization of what libraries are for adopted many of the same stereotypes that compromised the Summer 2012 debate over the renovation.

Then on January 3 the paper ran a piece about the sale of authors’ archives to libraries; of course this being the Journal, personal archives were framed not as a public good, but as an untapped source of potential income (Barry Newman, “As Trash Goes, Authors’ Clutter in the Right Hands Is Very Bankable”). A few days later they featured a rather nettlesome opinion piece by Peter Mandel (“Welcome to the Library, Where Shushing Is Overdue”) about the criminal invasion of noise into the library:

Long a refuge from the bustle of daily life, and a haven for adults and children who like the company of an engrossing page, the libraries I’ve been visiting lately are awash in almost as much noise and activity as a busy Starbucks.

I studied library acoustics for a couple years and published a few articles (including this one) on the topic. There’s so much to be said in response to this opinion piece — and, fortunately, many readers have written in to retort — but I’ll say only three things: first, there’s no reason “sounded” and silent activities can’t coexist in the same building, if it’s designed properly; second, libraries have long incorporated sound-making activities (e.g., some early Carnegie buildings included gyms, bowling alleys, music halls, etc.); and third, it’s been a while since libraries focused solely on books; they collect media in a wide variety of formats, including those for which sound is integral.

In a rather funny coincidence, the very next day the Journal offered Owen Fletcher’s “Check These Out at the Library: Blacksmithing, Bowling, Butchering,” which examined the growth and diversification of library programming — much of which is, yes, quite noisy. This sh*t would drive Peter Newman nuts! Of course the question arises: what does butchering have to do with libraries? The answer is: libraries likely have books on butchering — so why not think of the library as a place where patrons can put that book-knowledge into action? Books, live demonstrations, and workshops are simply different media, different platforms for education — all of which can have a place in this institution.

A week later the Journal turned its attention to Brooklyn. Jennifer Maloney’s “Library Eyes New Page” examined the Brooklyn Public Library’s renovation and digital-upgrading strategy, which will involve selling off some unfit old branch buildings and upgrading others; introducing an Info Commons, a digital lab and resource center, into its central building (just a couple blocks from where I live); and adding spaces for creative work. Of course closing branches is never a popular idea; when I spoke with the BPL’s Richard Reyes-Gavilan last winter for my Places article on “little libraries,” he asked me not to mention that, in their drive to become a more “nimble” institution, they were considering “messing with” (my words) the branches. Any perceived threat to the branches freaks people out. This was the case in every city I visited while researching for my book.

But as Reyes-Gavilan reinforced in our conversation, and as the library emphasized in the Journal article, “liberating” buildings that simply don’t function well in serving their communities, is actually an integral part of helping the BPL better serve its branch communities. According to the article, these real-estate dealings are done in support of the library’s main goals: “better serving the borough’s impoverished families, providing more resources for immigrants, and embracing Brooklyn’s now-established creative class with writers-in-residence, acquisitions of Brooklyn-penned oeuvres and studio space for artists” — which of course supplement their core mission: “ensur[ing] the preservation and transmission of society’s knowledge, history and culture, and…provid[ing] the people of Brooklyn with free and open access to information for education, recreation and reference.”

Predictably (I can imagine that Monday’s article incited a few branch-loyalist freak-outs), there was a follow-up article from Maloney the next day (“Proposal Would Replace Shuttered Brooklyn Libraries With New Spaces“), clarifying that “the library would replace any facilities it closes with new spaces in the same neighborhoods.” The sale of out-of-shape buildings, including some Carnegies, would “be used to pay for repairs and create new spaces designed for the digital age.” CEO Linda Johnson repeated: “We are not abandoning neighborhoods… There are some neighborhoods where we’ve got a library, but it’s just on the wrong block.”

Maloney’s original article referenced a report, issued last week by the Center for an Urban Future, on “Branches of Opportunity” in New York’s public library systems. Many of the challenges and opportunities and new developments examined in these various Journal articles are also addressed here, in the Center’s report. I spoke with David Giles, the report’s author, over the summer as he was gathering data. The main take-away is this: “New York City’s public libraries are serving more people in more ways than ever before, and have become an increasingly critical part of the city’s human capital system; but they have been undervalued by policymakers and face growing threats in today’s digital age.” 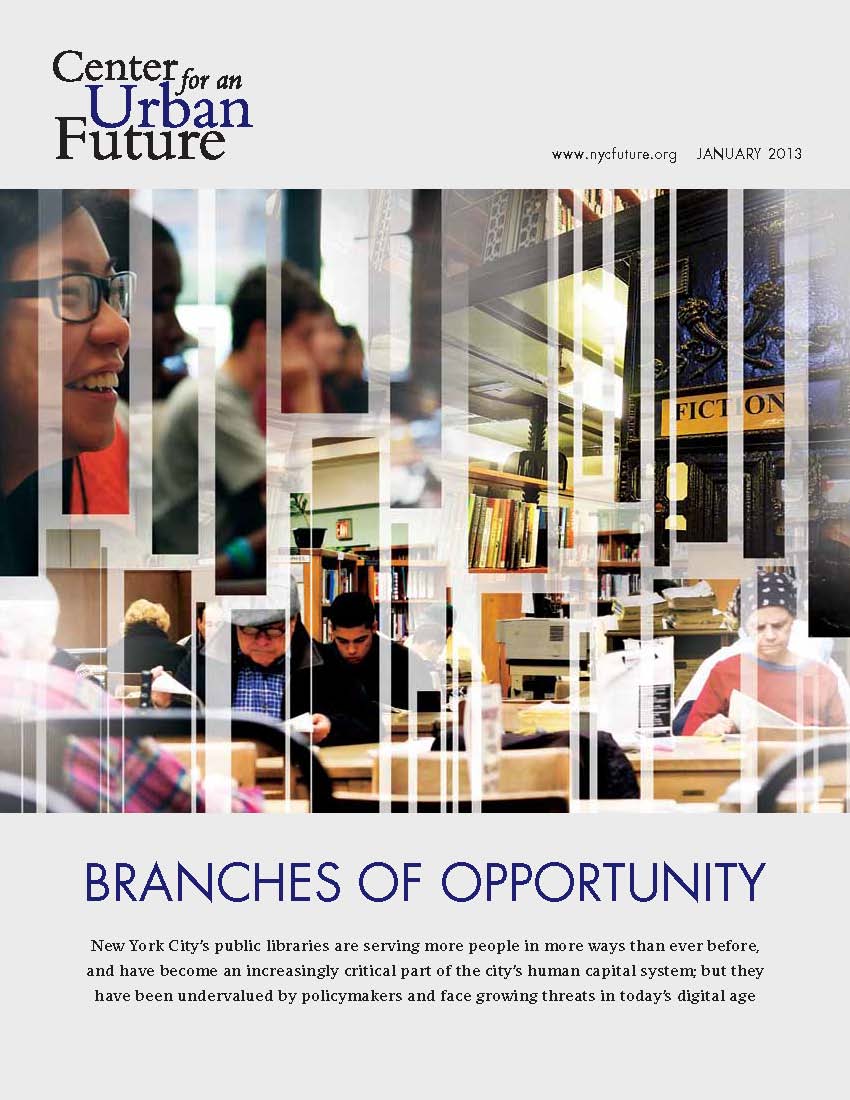 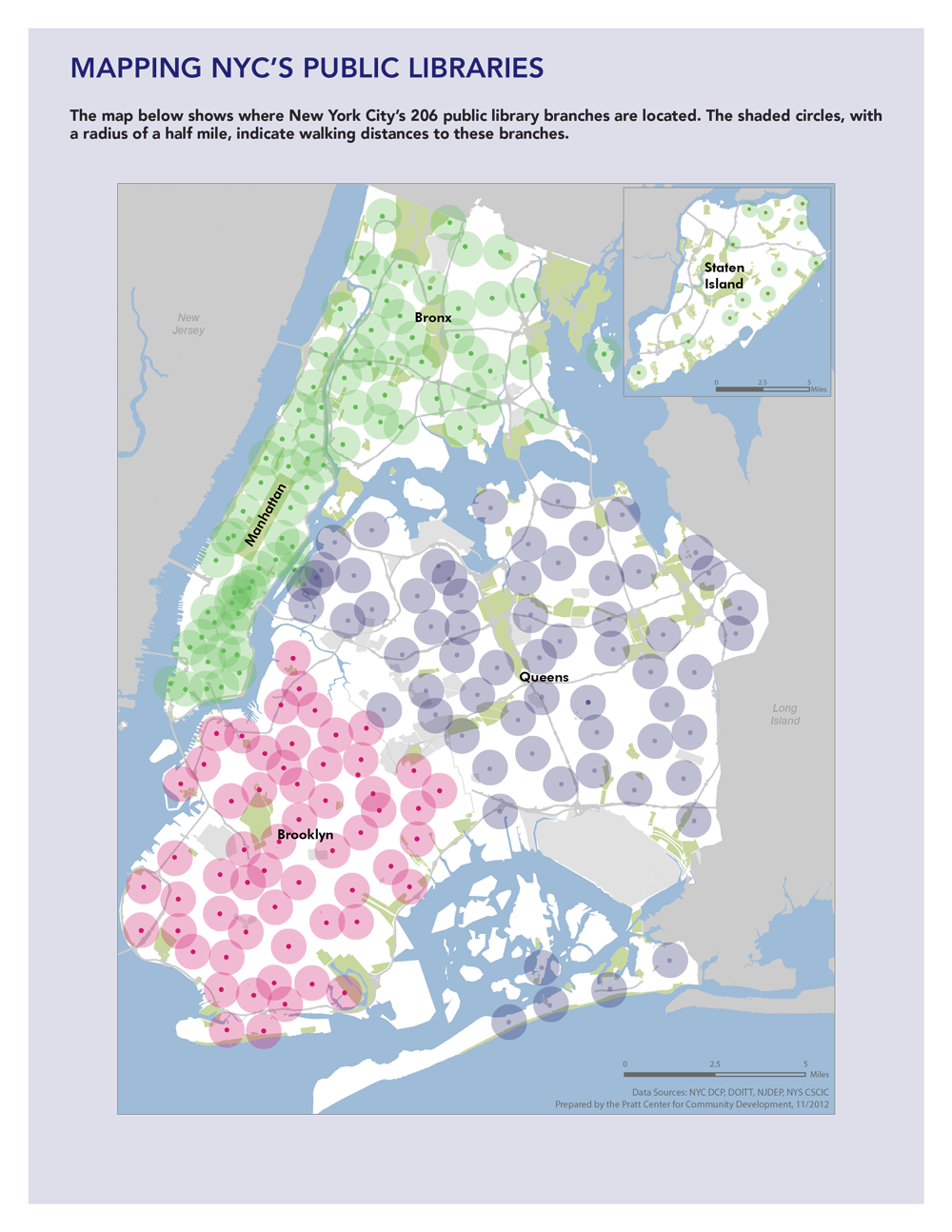 While Brooklyn, Queens, and the NYPL’s branches grapple with budget woes, aging infrastructure, Hurricane Sandy damage, etc., and work hard to devise creative solutions to accommodate the needs of their communities in this hybrid analog-digital media age, the NYPL flagship continues to focus on what seem like, in comparison, the “first world problems” of high-end architectural preservation. Just hours ago the Journal posted Jennifer Maloney’s “Engineer Unpacks Plan for the Stacks” (Maloney’s apparently become their library beat reporter!), in which Robert Silman Associates assures its client and public that it is possible to remove “seven levels of century-old book stacks that support the Fifth Avenue building’s Rose Main Reading Room like a 53-foot-high Erector set.” How? They’ll “install 12 new support columns in between the existing stacks,” and “transfer the weight of the reading room to new supports without causing so much as a crack in its historic, red-quarry tile floor.” 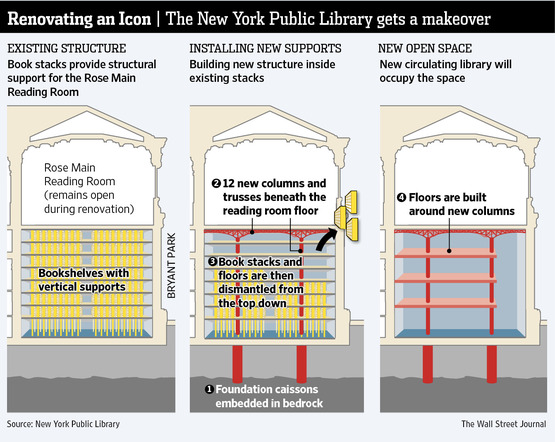 “All while library patrons read in the vaulted space above.” No disruptions necessary. No need to divert one’s attention from her book to contemplate the engineering feats — the insane playing-with-the-laws-of-physics stuff — taking place beneath her feet. This unawareness, or perhaps we should just call it obliviousness, seems to characterize the way we often think about our public libraries: we — and by we I mean particularly those of us among the “haves” of the information age — so often fail to recognize just how many people these institutions serve (including us!), what vital roles they play in those folks’ lives, how freaking complicated the logistics of running a library are, how much infrastructure and expertise is needed, and just how much support — moral, political, financial — they deserve.