Back in November the Radcliffe Institute for Advanced Study hosted “Take Note,” a conference that brought together “scholars from literature, history, media studies, information science, and computer science to explore the past and future roles of note-taking across the university.” I wish I could’ve been there. It attracted a good deal of attention — from the NY Times, the Boston Globe, and, just this week, the Chronicle Review — which is quite uncommon for your typical academic conference. Coincidentally, this week’s New Yorker also featured a glorious piece by John McPhee about his own evolving note-taking and writing processes.

The conference’s organizers, Ann Blair and Leah Price, have been studying note-taking for a decade or more, as have several other conference participants: Lisa Gitelman, Bob Stein, Geoffrey Nunberg, etc. I’ve also encountered quite a few architectural historians who have long been examining marginalia and modifications in the books in architects’ and architectural theorists’ personal libraries (see, for instance, Sarah McPhee’s “The Architect as Reader” JSAH 58:3 (Sept. 1999)). And then there are the five years’ worth of fabulous posts on Taking Note, “a blog on the nature of note-taking and some of its practical as well as theoretical implications.” It’s one of my favorite blogs, and I wish I knew who was behind it. While much of the press coverage suggests that the study of notes is a new area of inquiry — inspired in large part by questions about how those notes will be preserved as they migrate to the digital realm — historians of the book, and scholars from other fields, have actually been studying notes and marginalia for quite some time. 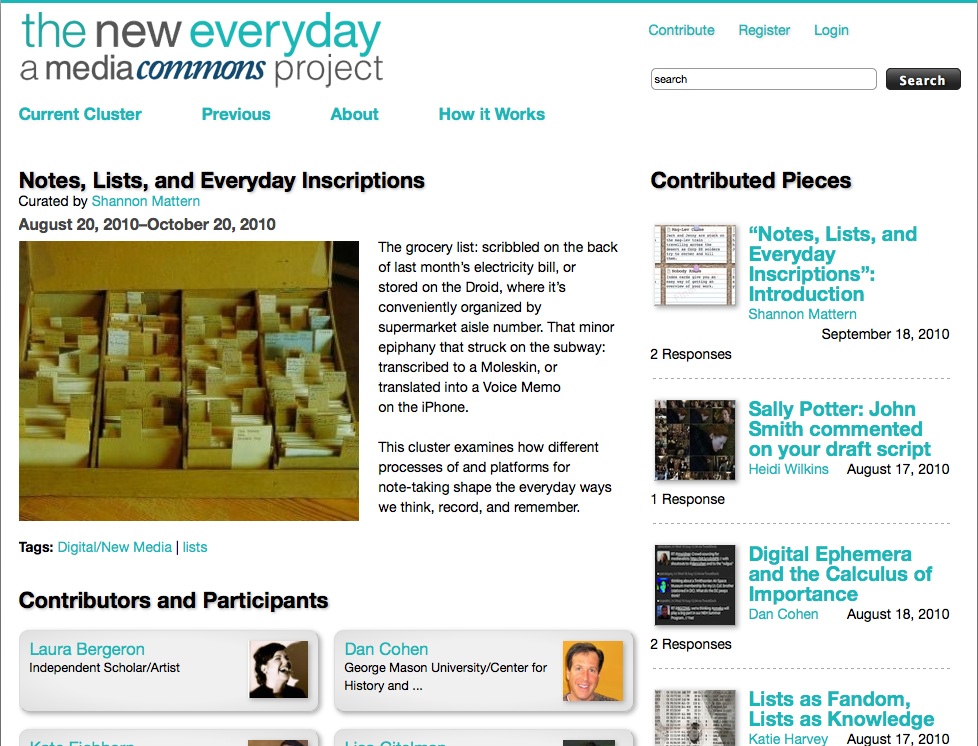 Finally, I can’t not acknowledge a project I was involved in: nearly three years ago I organized an issue on “Notes, Lists, and Everyday Inscriptions” for The New Everyday. It included entries from (among others) Lisa Gitelman; the Smithsonian’s Liza Kirwin, who curated an exhibition and published a book on artists’ lists and notes; Andrew Piper, author of Dreaming in Books: The Making of the Bibliographic Imagination… and Book Was There: Reading in Electronic Times; and Dan Cohen, whose Center for History and New Media has developed many open-source note-taking and bibliographic platforms. The topics and themes I explored in my intro bear much resemblance to those in the Boston Globe preview of the conference.