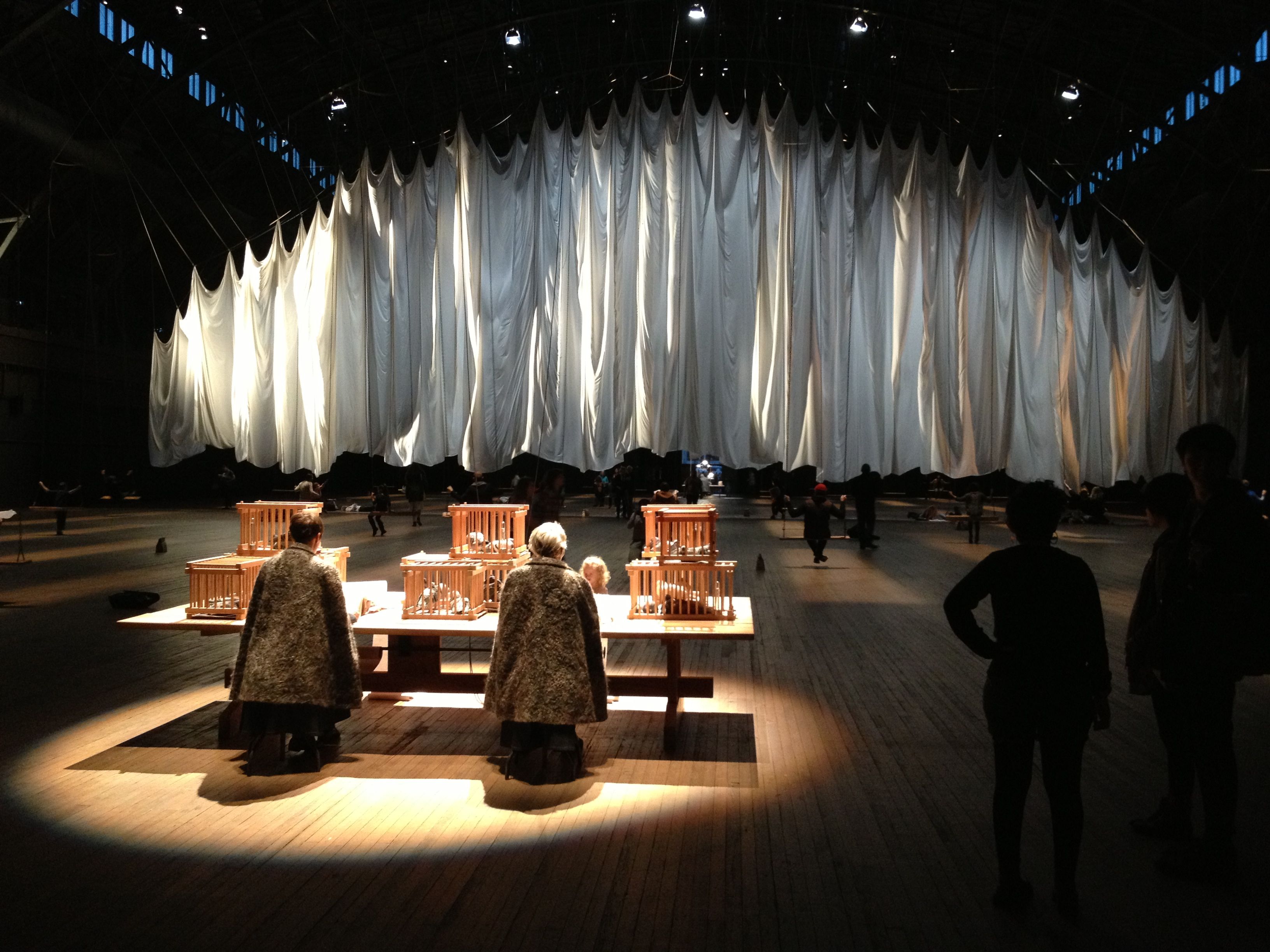 Yesterday afternoon my Archives, Libraries & Databases class visited Ann Hamilton’s the event of a thread installation at the Park Avenue Armory. I was in heaven. Not only is she among my favorite artists, but her work also perfectly illustrates so many of the issues we’ve been addressing throughout the semester: the evolution of media and the concurrent evolution of institutions dedicated to collecting and storing them; the materiality of the record; dimensions of existence that defy recording; the stuff of knowledge that leaks between the shelves, between the classification categories, etc.

Plus, there were swings! I haven’t swung in nearly a decade!

There’s so much to see and hear and feel here that it’s nearly impossible to describe the experience. Luckily, others have tried their hand at such a description, so I’ll turn to a press release posted on e-flux:

the event of a thread draws inspiration from the act of reading aloud and its relation to the varied experiences of speaking, listening, and recording. Over the duration of the exhibition, a succession of attendant readers, two at a time, will read aloud while seated at a table near the drill hall’s entrance. Their live voices will become a constant presence broadcast throughout the installation on a radio bandwidth designed to occupy a single city block, the physical footprint of Park Avenue Armory. Radio receivers will circulate to visitors who will be able to “carry” the voices as they traverse the installation. Continuing this theme of transmission, 42 trained homing pigeons, historically used to communicate messages, will be housed in cages surrounding the readers’ tables. On the opposite end of the expansive drill hall, an attendant writer—a quiet presence and visual counterpoint to the readers—will inscribe a response to the radio transmissions, the reading voices, and the room behind them as seen in a mirror reflection.

At the center of the installation, a field of 42 swings suspended from the hall’s elliptical wrought iron structural trusses will connect via ropes and pulleys to a massive cloth that bisects the space and will be animated by the movement of the swings. The shifting constellations of people gathered and invited to use the swings will create a complex kinetic system and an experience of communal connectivity.

I should note that, when we entered, one of the “attendant readers” was Hamilton herself, which was quite a treat.

What kinds of media, what modes of communication, are represented here? We’ve got newspaper, 8 x 11″ lined paper covered with handwriting, scrolls covered with typewritten text, pigeons (which once, like the horse, served as a vital means of transmission), vinyl-record-engravers, erasers, bells, bellows, radios, the voice — and air: the medium for both the voice and the birds, an invisible medium whose presence is made manifest via the billowing curtain at the center of the hall. The curtain could also be said to be a medium. As Hamilton writes in the program,

Cloth is the body’s first architecture; it protects, conceals and reveals; it carries our weight, swaddles us at birth and covers us in sleep and in death. A patterned cloth symbolizes state or organization…. Like skin, its membrane is responsive to contact, to the movement of air, to gravity’s pull.

Each of these individual media takes on multiple modalities: the voice, for instance, is ephemeral and barely audible as the “attendant readers” intone their texts — sometimes in unison, sometimes trading off parts — into a microphone (they transform the lines, or “threads,” of the text into a performed “event”); then that voice is transformed into a “thing” captured in a paper bag (inside the bag is actually a radio broadcasting the live reading). 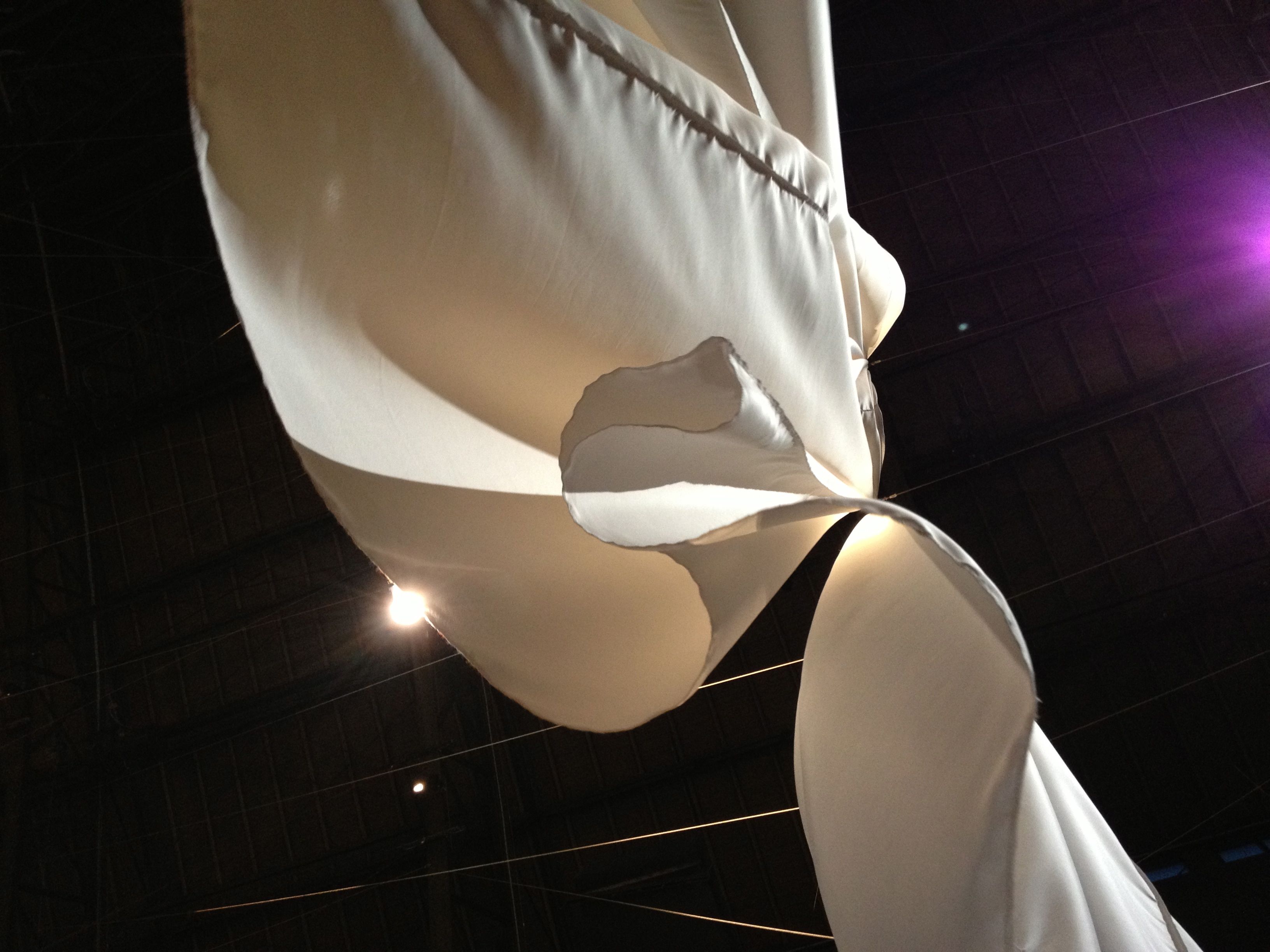 We also talked about the various temporalities represented by these different modalities: while the radio transmits the reading voice instantaneously, the curtain registers air circulation with a few-second delay. The newspaper “program,” a format that implies a daily life-cycle, is instead printed once for the entire duration of the exhibition. Meanwhile, the recorded song operates on a 24-hour cycle: each evening’s song is recorded, then played back the next morning.

Several of my students commented on the various kinds of labor, or performance, represented in the installation. We had “official” participants, including the artist herself, reading and writing and erasing and singing and recording. And we, the visitors, gleefully labored on our swings to move the curtain (perhaps there are parallels to be drawn here to the “enjoyable exploitation” of digital labor?)

Hamilton draws a “thread” between these various actions, and creates a parallel between this communicative labor and the labor of a loom:

Each scroll contains the possibility of multiple readings, and each reading becomes an act of writing. If the scroll is warp and the reader is weft, then the voice, transmitted in hand-carried paper bags, is a shuttle, whose reach is further extended as the script streams silently on the web. 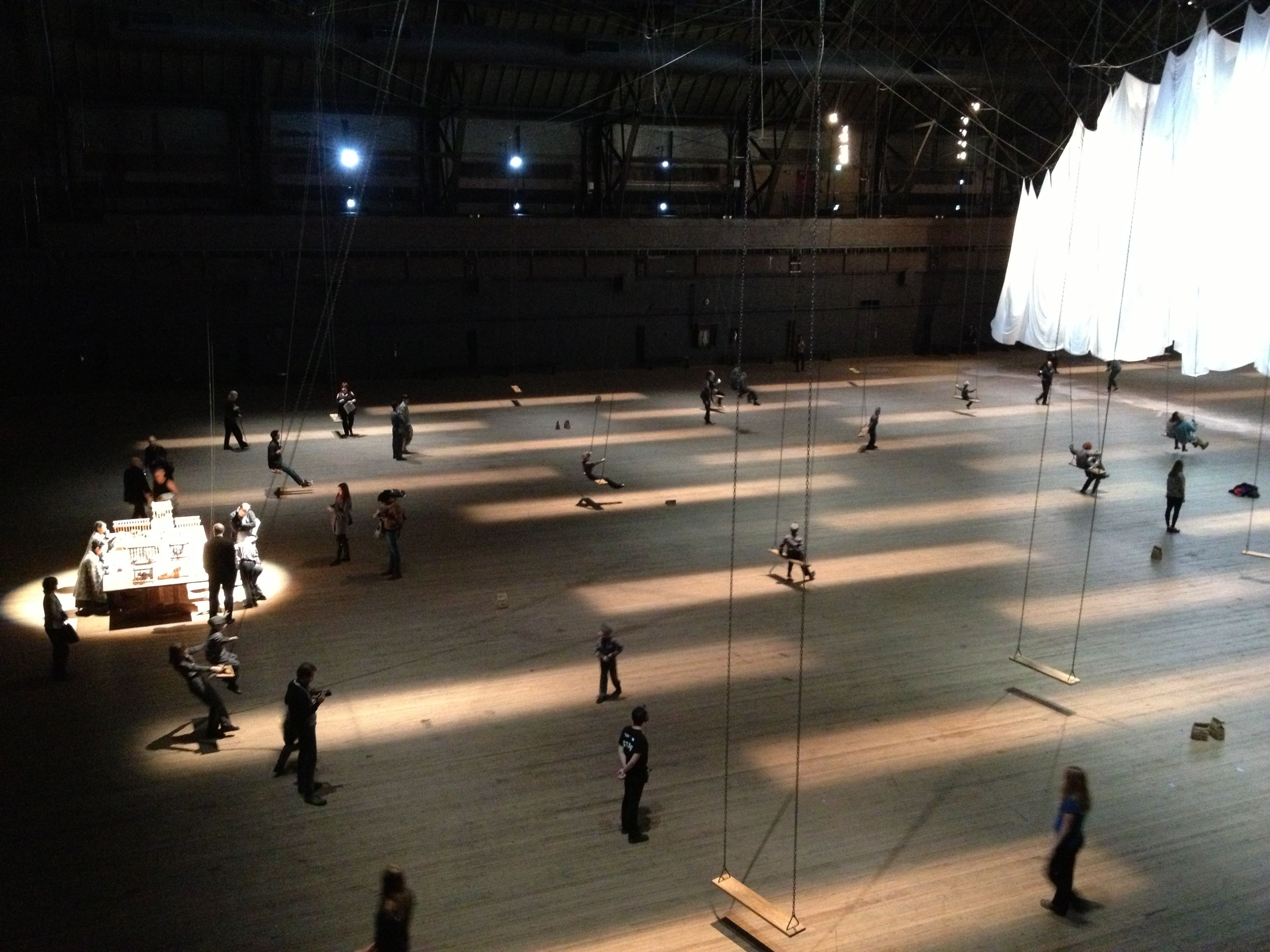 The photo above was taken from the mezzanine of the Drill Hall. Hamilton explains what we see in the field below, from a vantage point that allows for a bird’s (pigeon’s)-eye view:

If on a swing, we are alone, we are together in a field. This condition of the social is the event of a thread. Our crossings with its motions, sounds, and textures is its weaving; is a social act.

One reply on “Pigeons, Swings Eraser Dust: Ann Hamilton’s The Event of a Thread”

The evening was breath taking. I did not read all the information before but saw the light under the swings, My husband a I went on the swing separatly and together then up to the balcony to see the woman sing and the pigeons carried cerimoniously under the curtain and released. The reader, the writer all made it unforgettable evening.