Since returning from Korea early last week, I spent a few days back in New York before heading off for another short trip. I dedicated one of my New York afternoons to catching up on several exhibitions I had missed while I was away. Perhaps it’s simply because I had seen so much art in Seoul that I was quite underwhelmed by the handful of shows I saw in Chelsea, the Ecstatic Alphabets show at MoMA (which I had been looking forward to for sooo long!), and even the Ghosts in the Machine exhibition at The New Museum. I had so wanted to be blown away by the latter — especially after reading provocative previews for months; and finding uncannily similar, and equally effusive, reviews in the WSJ and The New Yorker early last week. But, unfortunately, it didn’t quite work for me. Maybe it’s because I had encountered some of the work in the exhibition in other contexts. Or maybe it was just the way it was all put together. I appreciated that the curators regarded the show not as a coherent unit offering a tight thematic statement, but instead as an “encyclopedic cabinet of wonders: bringing together an array of artworks and non-art objects to create an unsystematic archive of man’s attempt to reconcile the organic and the mechanical.” Those ideas were just so big — and the show’s modes of address were so varied, resembling at times a pedantic science exhibition and at others an art-historical survey — that I left this “cabinet” overwhelmed not with a sense of “wonder,” but a little bit of frustration…with myself, for not being able to find a gestalt here.

One of the highlights for me was the recreation of Stan VanDerBeek’s 1963 Movie-Drome, which reminded me a bit of Le Corbusier, Xenakis, and Varèse’s 1958 Philips Pavilion: 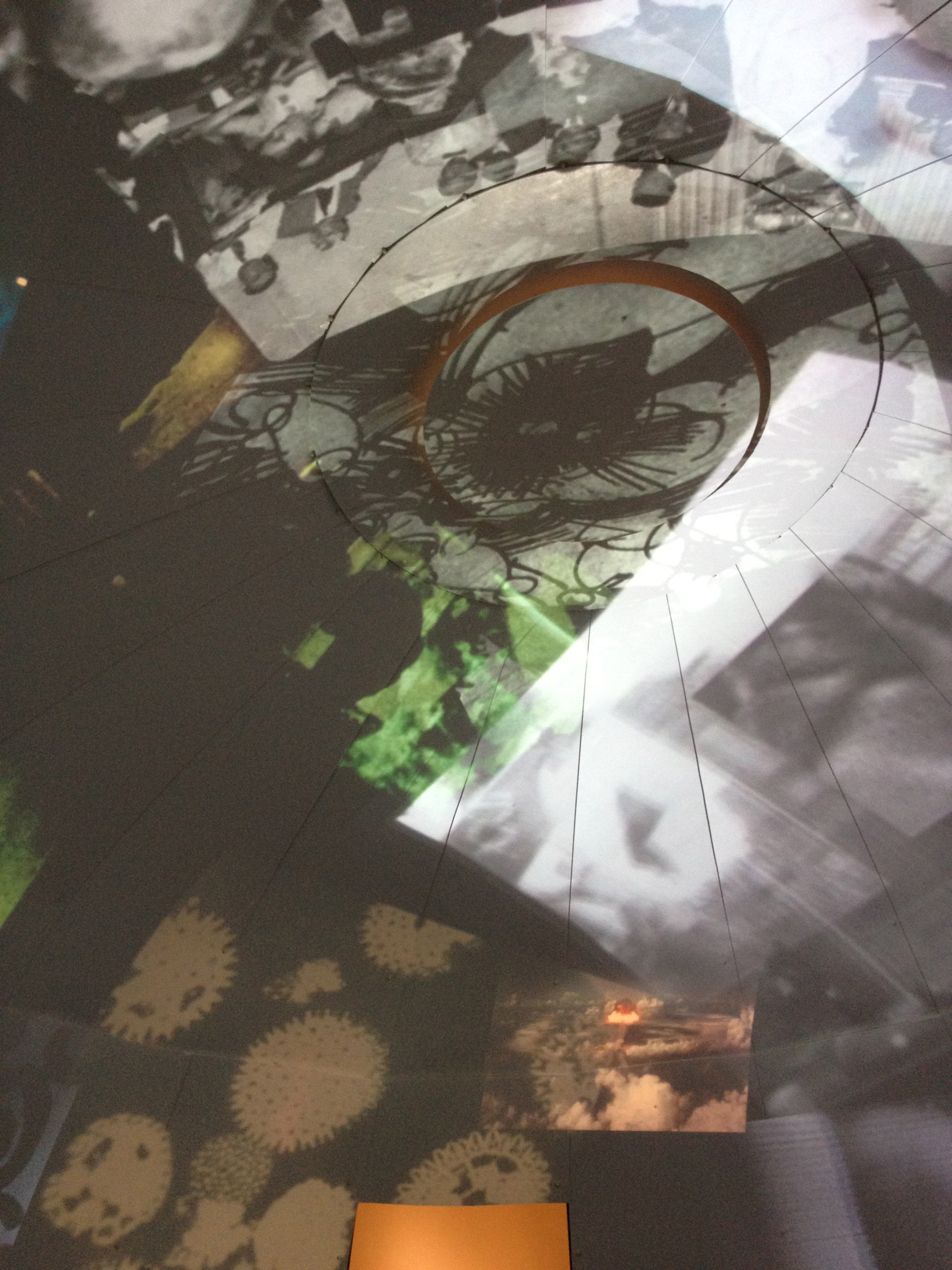 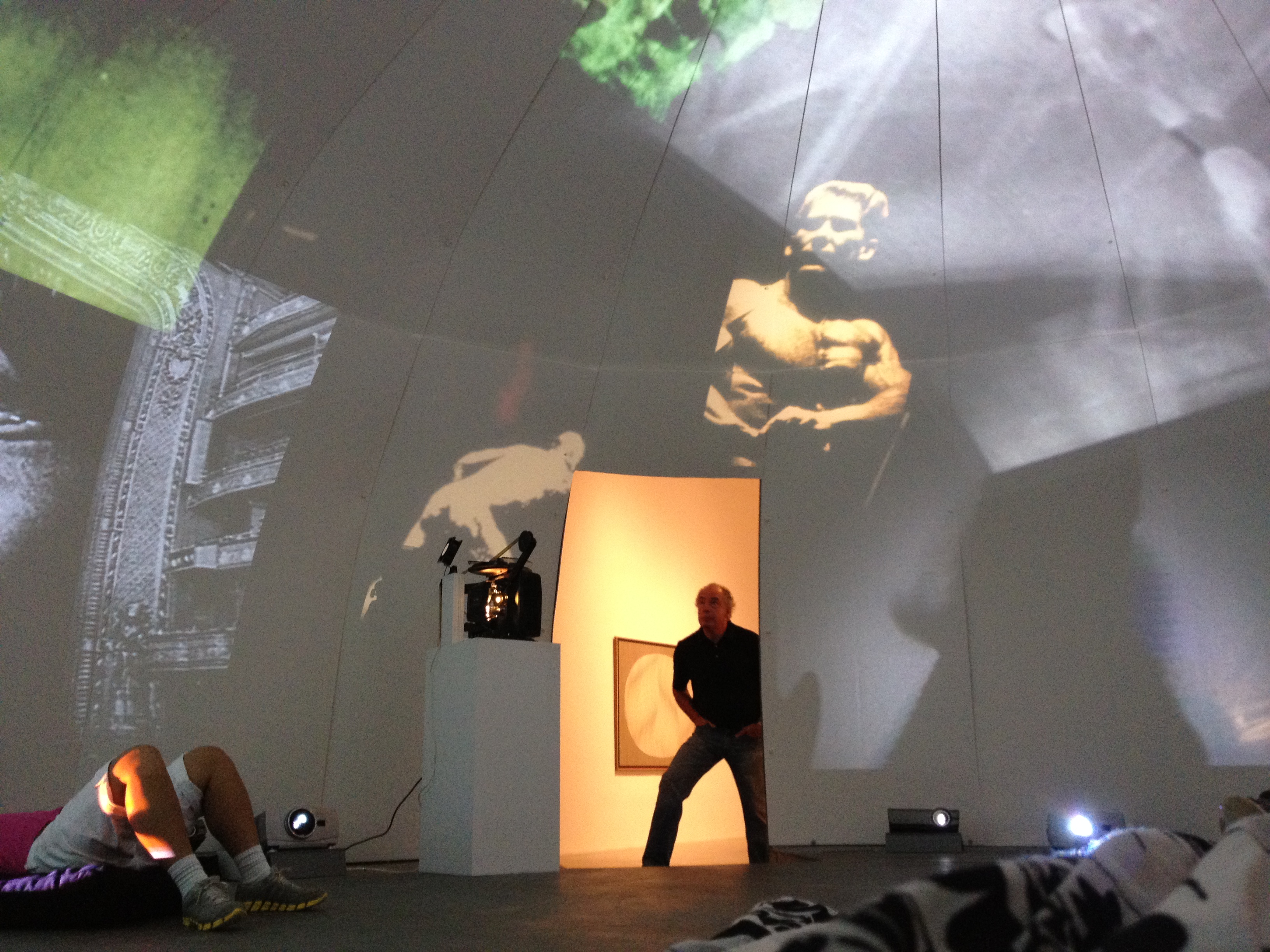 And speaking of potentially underwhelming miscellanies: I was invited to list the first five websites I visit every morning for Tamsyn Gilbert’s fantastic Tumblr, The First Five, which offers insights into lots of interesting folks’ web diets. I cheated big time and managed to squeeze in several dozen references, but my big five were Google Reader, Design Observer, Atlantic Tech, HiLoBrow, and Pitchfork. 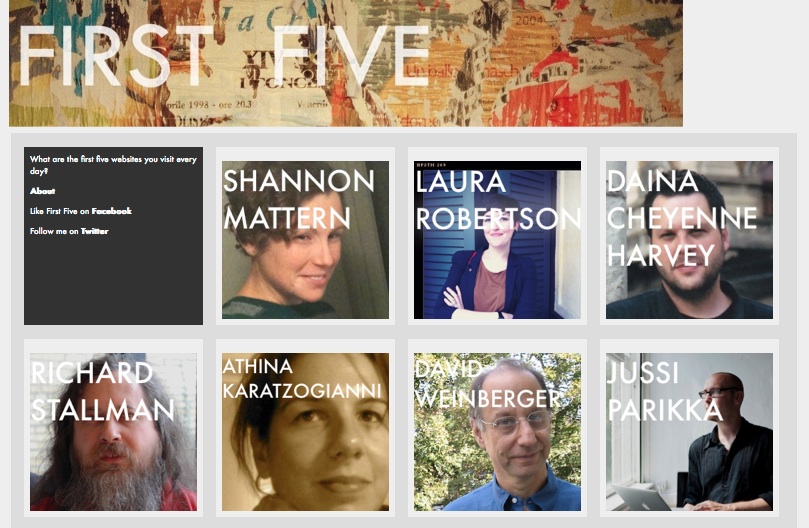 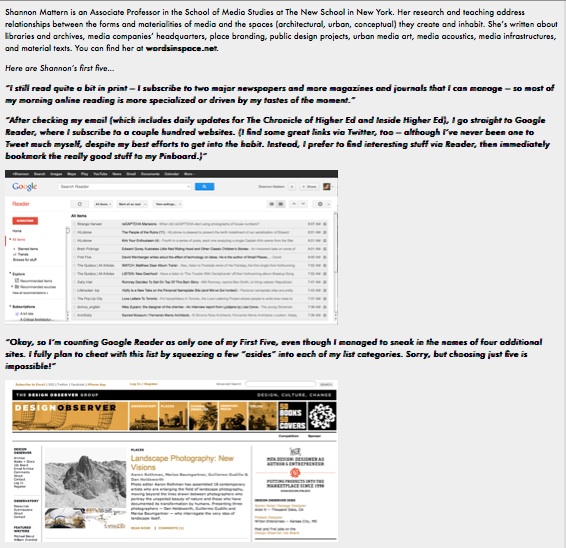 I had quite the same impression of “Ghosts in the Machine” at the New Museum. At my first visit, I just thought it’s not enough to put a lot of objects together and tell the people: Everything is related to everything, go ahead and find your own network! But then I realized that I won’t find so many illustrations of the concept of the “desire machine” anywhere else. Thus, I made another try, and published a short (german) piece about the exhibition on my blog: http://barabern.wordpress.com/2012/08/19/gymnastik-der-wahrnehmung/

Are you back in NY? I’d really enjoy to meet for a coffee.

All the best,
Simon

Thanks, Simon! You’re right: I really should go back and give the “Ghosts…” show a second go. I read and enjoyed your post.

I’ll write you about getting together sometime soon!