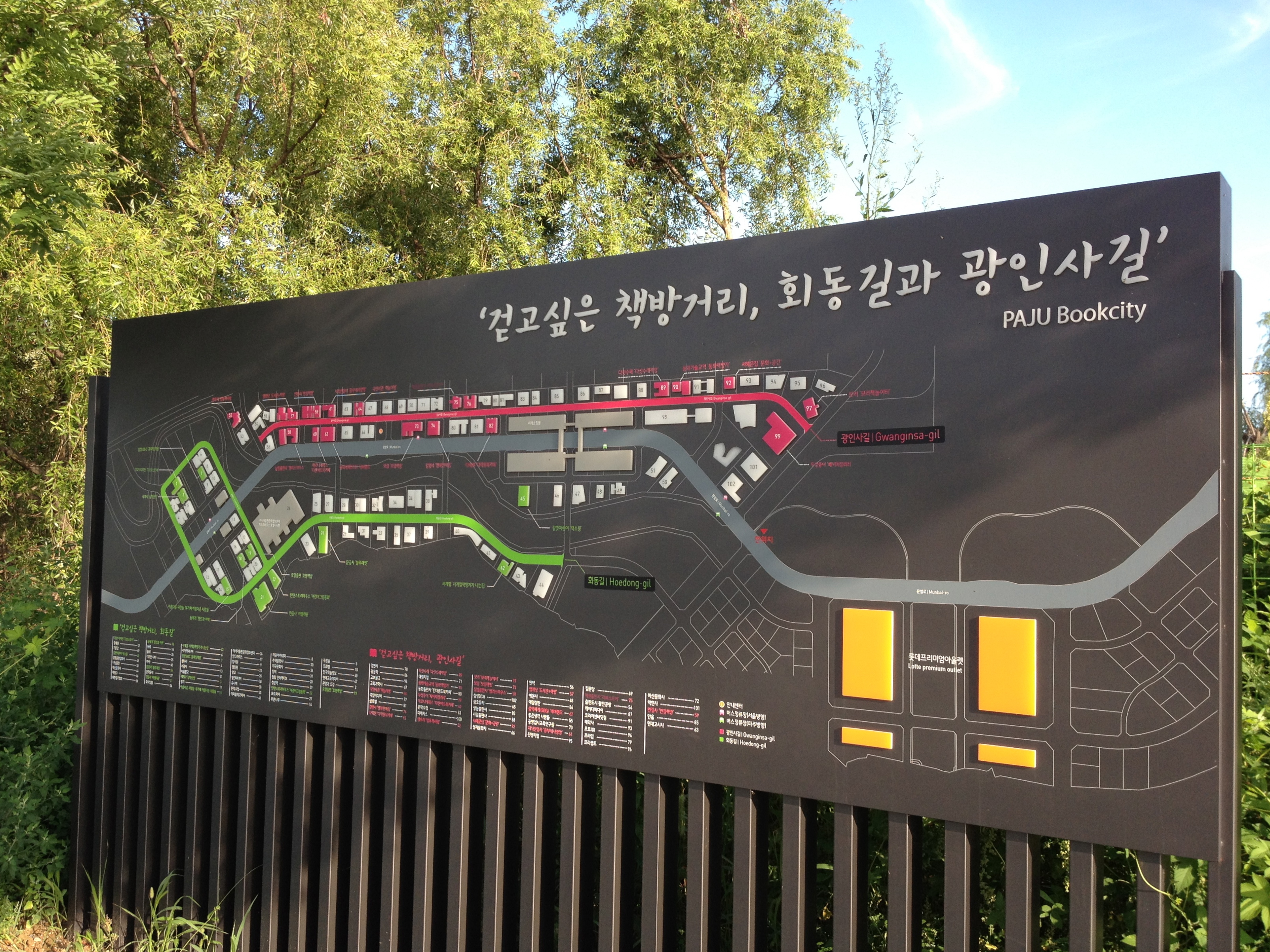 This past week was dedicated primarily to research on and in Paju Bookcity. On Monday Ran and had the honor of meeting with Seung H-Sang, one of the chief design coordinators for PBC. We discussed his thoughts about contemporary Korean urban planning, his own involvement in the design of Phase 1 of Paju Bookcity, and his hopes for the future development of Paju. And I forgot to mention that last week we met with Baek Won Keun, Chief Researcher of the Korean Publishing Research Institute, with whom we discussed the history and future of Korean publishing, and how that past and future have informed, and perhaps should inform, the evolution of PBC. Tuesday and Wednesday (in addition to last Friday) were dedicated entirely to on-site research and interviews in Paju. I’ll offer a more comprehensive picture of our work in a later post.

For now, I’ll talk about a fantastic — and highly relevant, given the week’s recurring discussion themes — exhibition I saw at the Total Museum of Contemporary Art yesterday. MRVDV / The Why Factory were invited to present “The Vertical Village,” a big, dynamic, playful, and terrifically smart exhibition about city-building. After hearing so much talk this week, in our conversations with architects and planners, about their general dissatisfaction with the pace and products of recent Asian urban developments — and after seeing so many interchangeable “New Towns” along the road from Seoul to Paju — “The Vertical Village” presents a provocative look at some alternatives. (It’s worth noting that Paju Bookcity’s planners prided themselves on their rejection of Western-style master-planning and capital-driven development, and their foregrounding of collaboratively-defined, humanistic design values.)

From the lovely little Welcome to the Vertical Village catalogue (which I got for free, in exchange for completing a survey about the exhibition!):

For centuries, the fabric of East Asian cities has been formed by urban villages that are built up of small scale, informal, often ‘light’ architecture: the hutongs in Beijing, the small — mostly wooden — houses in Tokyo, the villages in Singapore, the kampungs in Jakarta, as well as the individual houses and rooftop-extensions in Taipei.

These urban villages form intense, socially connected communities where strong individual identities and differences are maintained. Because they are, and have been, inhabited mostly by the poor, land is cheap — and therefore, change comes easily…

Driven by demographic and economic forces since the start of the second millennium, these cities are rapidly changing. In a relentless ‘Block Attack,’ massive towers, slabs and blocks with repetitive housing units, floor plans and facades are invading — scraping away the urban villages that have evolved over hundreds of years. These alien buildings provide a Western standard of living, destroying indigenous communities in the process. They obstruct urban innovation and discourage differentiation, flexibility and individual ideas.

Is there a better way to develop these areas? Could we densify them without sacrificing the informality of the urban village? Could we even apply the principles of informality to generate new neighborhoods? What if we could grow urban villages vertically, as an alternatives to the monotonous sea of blocks?

This approach could enable housing types with terraces and roof gardens that accommodate leisure activities. This comfortable lifestyle might even attract the middle and upper classes, leading to a more mixed and less segregated society. Homes could even be combined with small-scale offices and workspaces. In contrast to the blocks, this new village type might enable an architecture based on individual expression and identity…

Can this new kind of village be developed in an evolutionary manner? Can a workable model for a self-organized process of city-building be provided?… Such a development would require a framework and a set of principles to regulate and support the individuality of its elements, while guaranteeing safety, sunlight, sanitation, and the wishes of its inhabitants. What technologies would be needed? How can health regulations and air rights be addresses? What about fire safety? Can development be phased?

We need to provide a workable model for a truly self-organized manner of city building — a model that combines individuality, differentiation and collectivity with the need for densification, as an alternative to the Block Attack. A model that can generate a vertical village — a three-dimensional community that brings personal freedom, diversity, flexibility and neighborhood life back into Asian — and maybe even Western — cities.

The exhibition is organized into 15 “stations”:

It was such a fun and engrossing show I spent a good hour in the museum. And on my way out, I caught a glimpse of a strange form up in the hills of Pyeongchang-dong — so I hiked up some crazily steep streets to get a closer look. I’d love to learn more about this place: 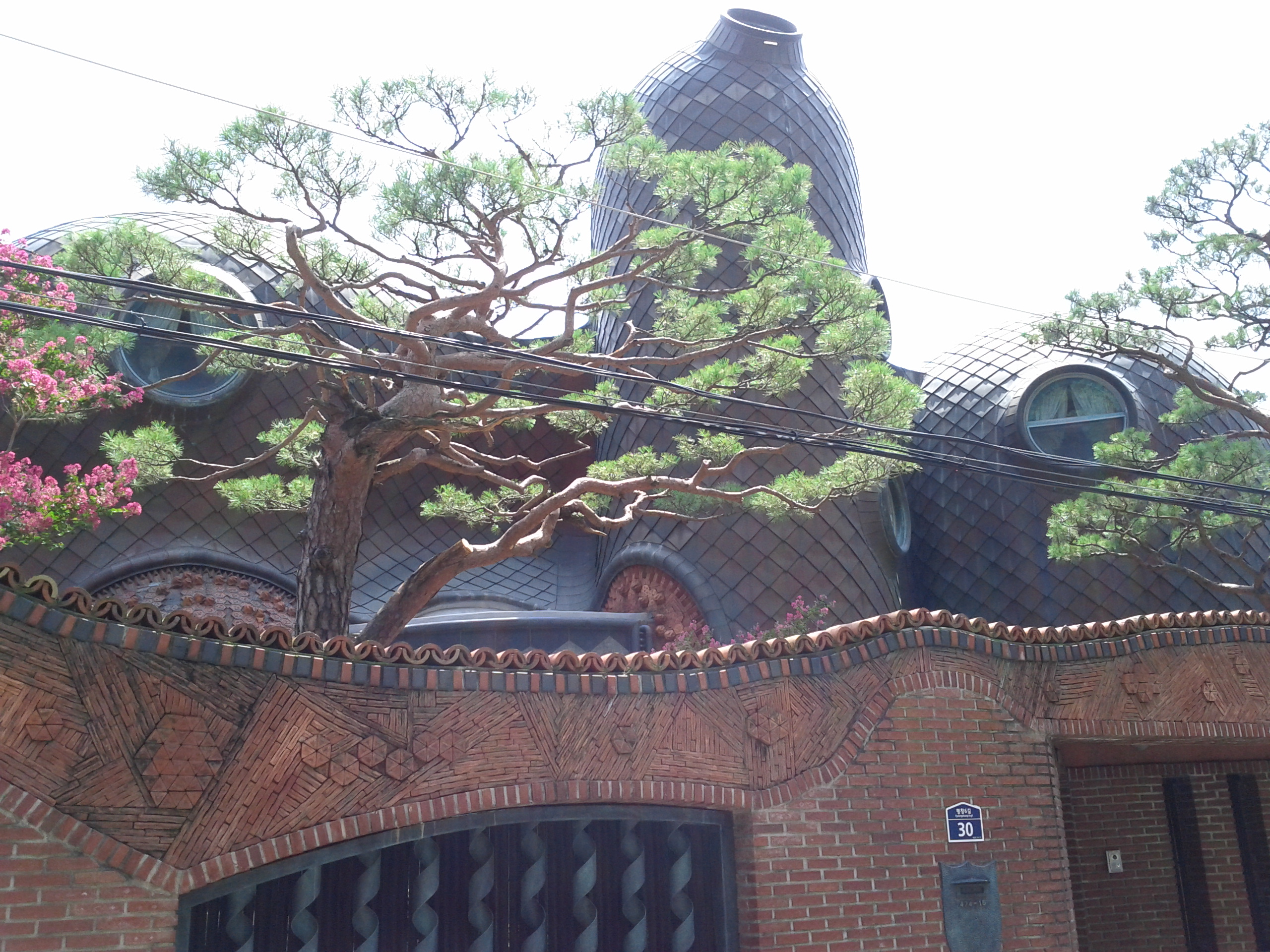 My final days in Seoul were dedicated to lots of writing, a final meet-up with Minhyoug (during which we apparently crossed paths with some Korean TV stars, whom I never would’ve recognized); final climbs up Inwangsan mountain (where I discovered a marvelous temple tucked up in the rocks) and Namsan; and an evening in Hongdae and Hapjeong with Ran, during which I marveled at all the cute cafes in the back alleys, and finally recognized just how central convenience stores seem to be to public life in Seoul: the Family Marts commonly put tables outside, and local folks of all stripes hang out and drink — and, while I was there, watch the Olympics.

My final full-day in Korea was the first honest-to-God mostly-sunny day I was able to enjoy on my entire trip, so I caught a nice northern panorama from the top of Namsan: 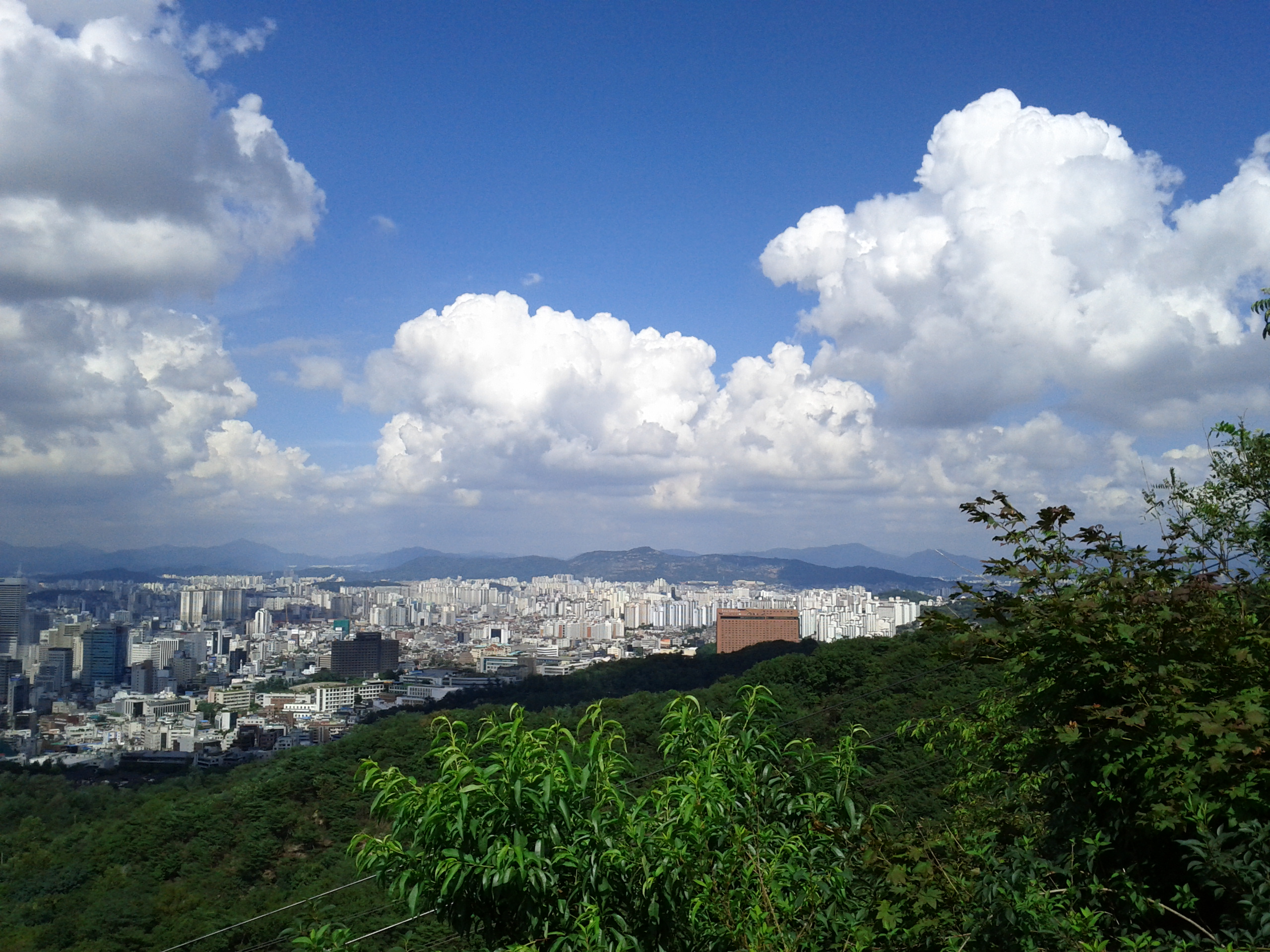 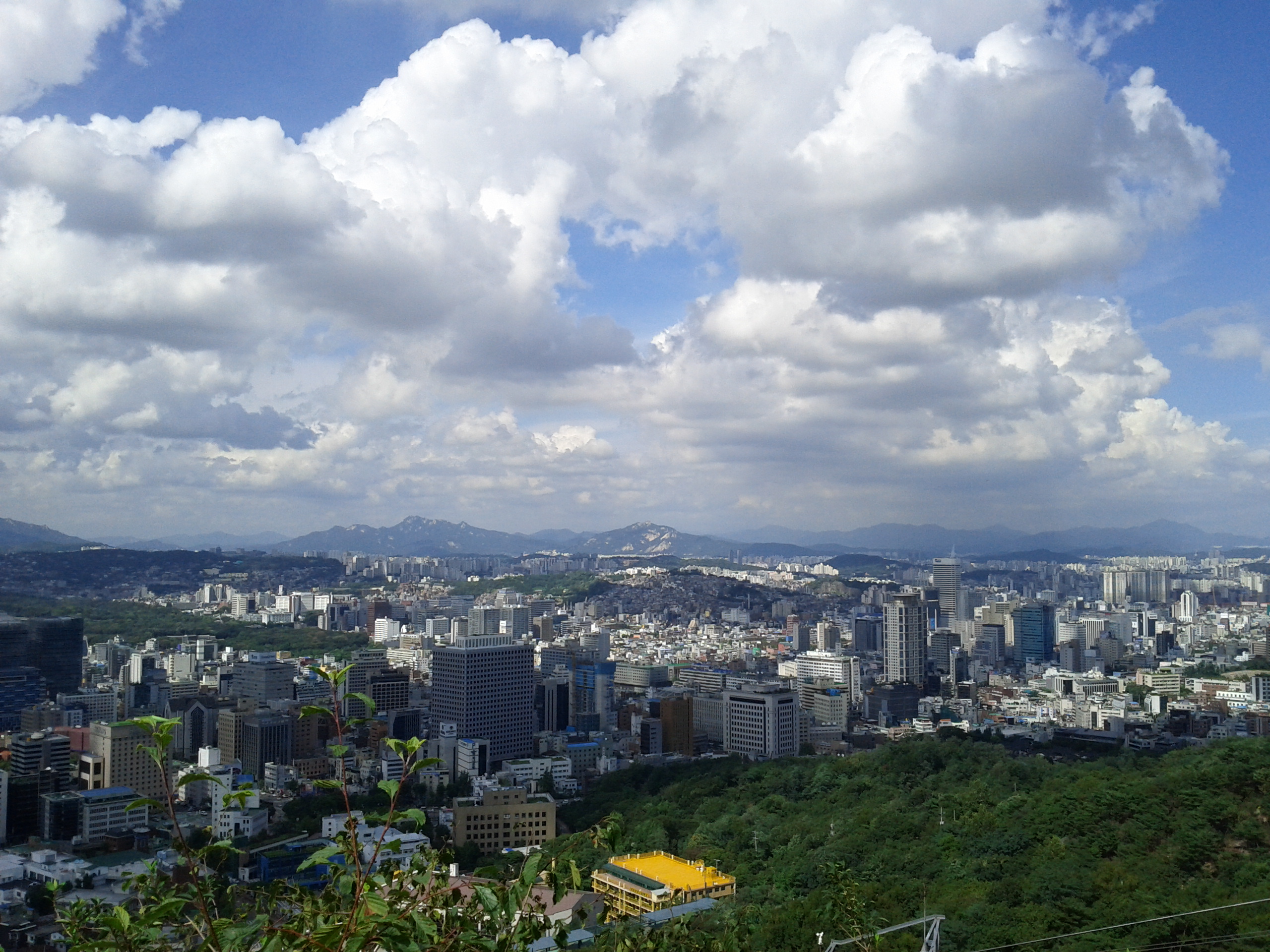 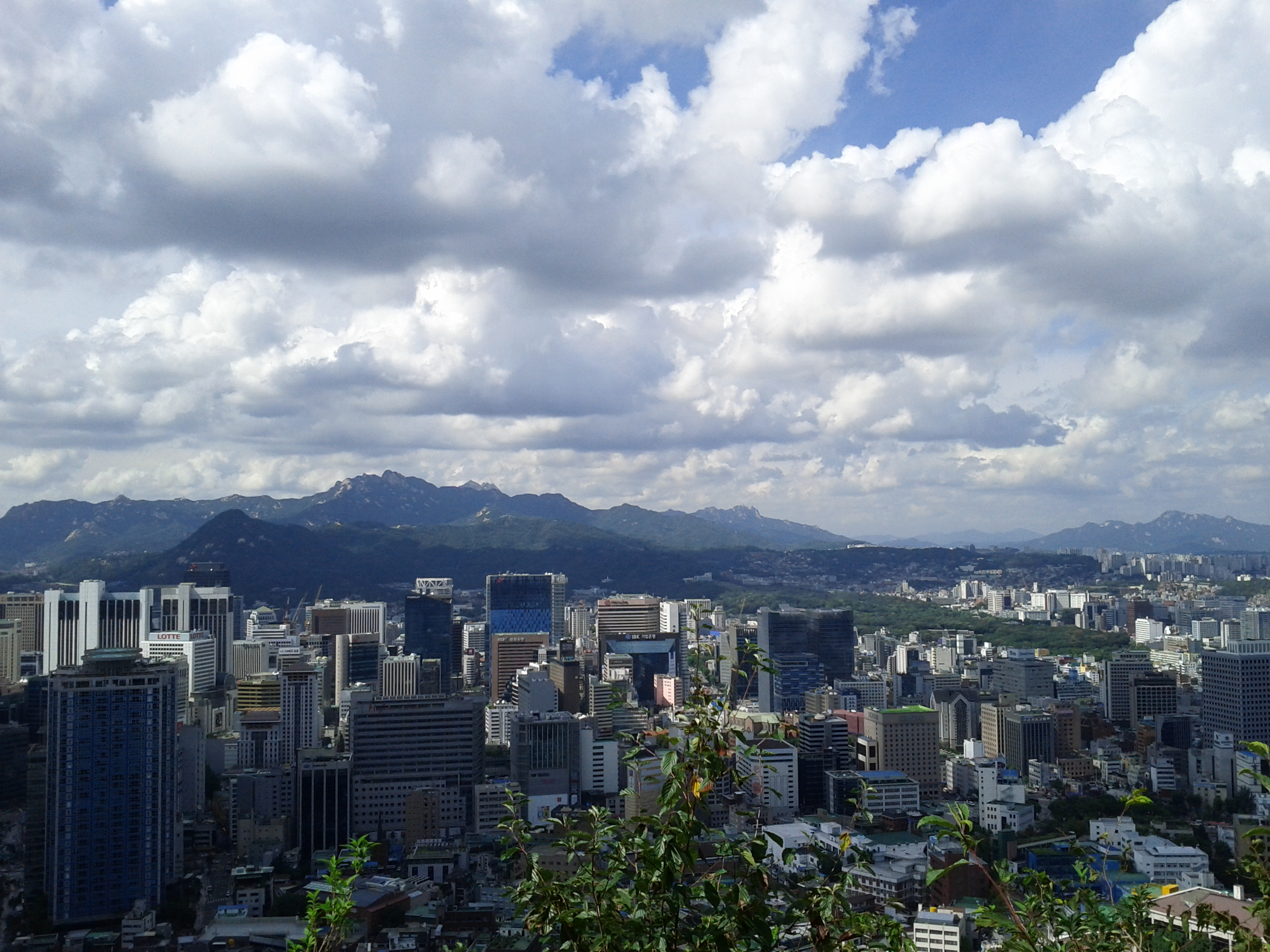 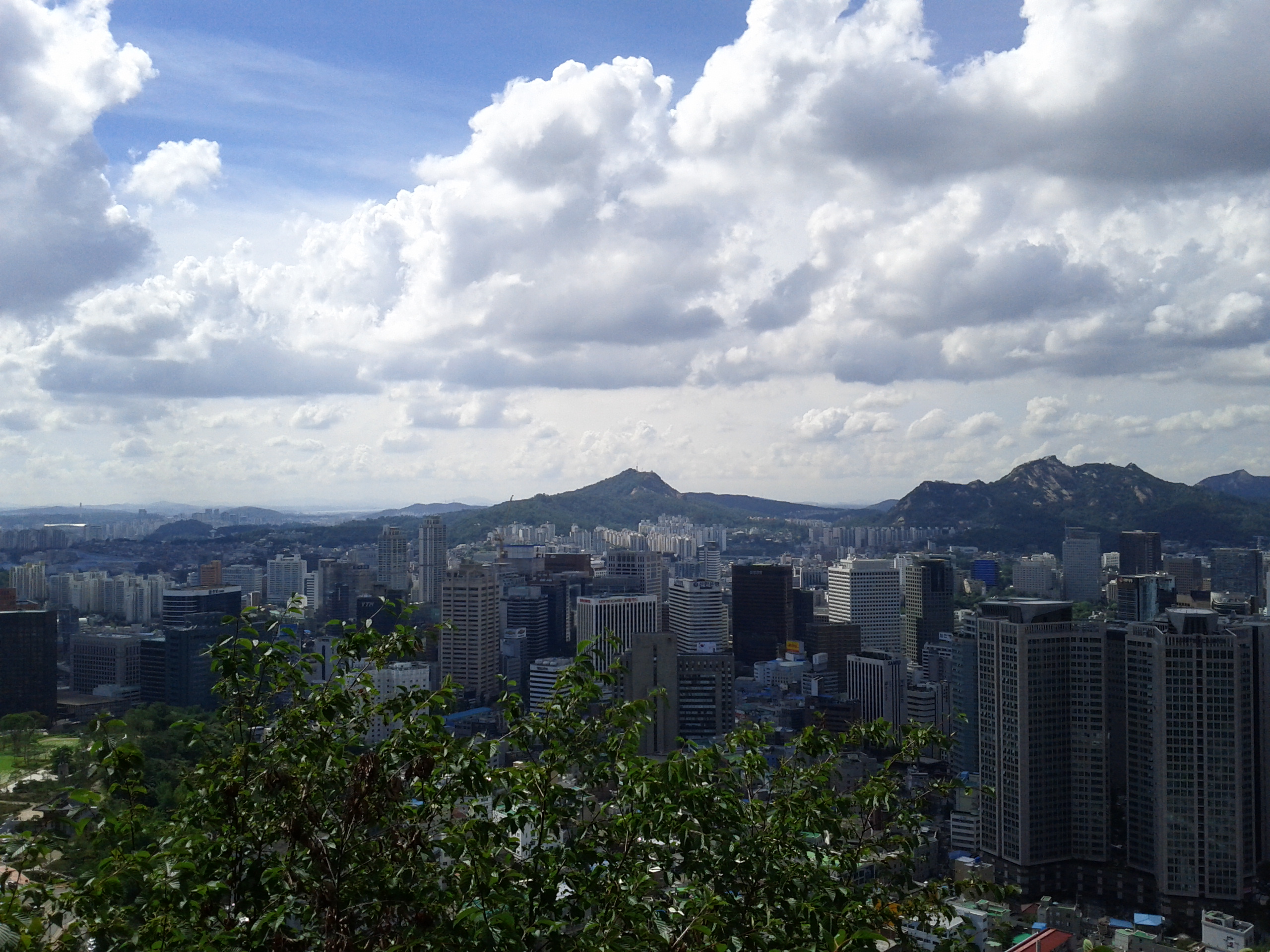 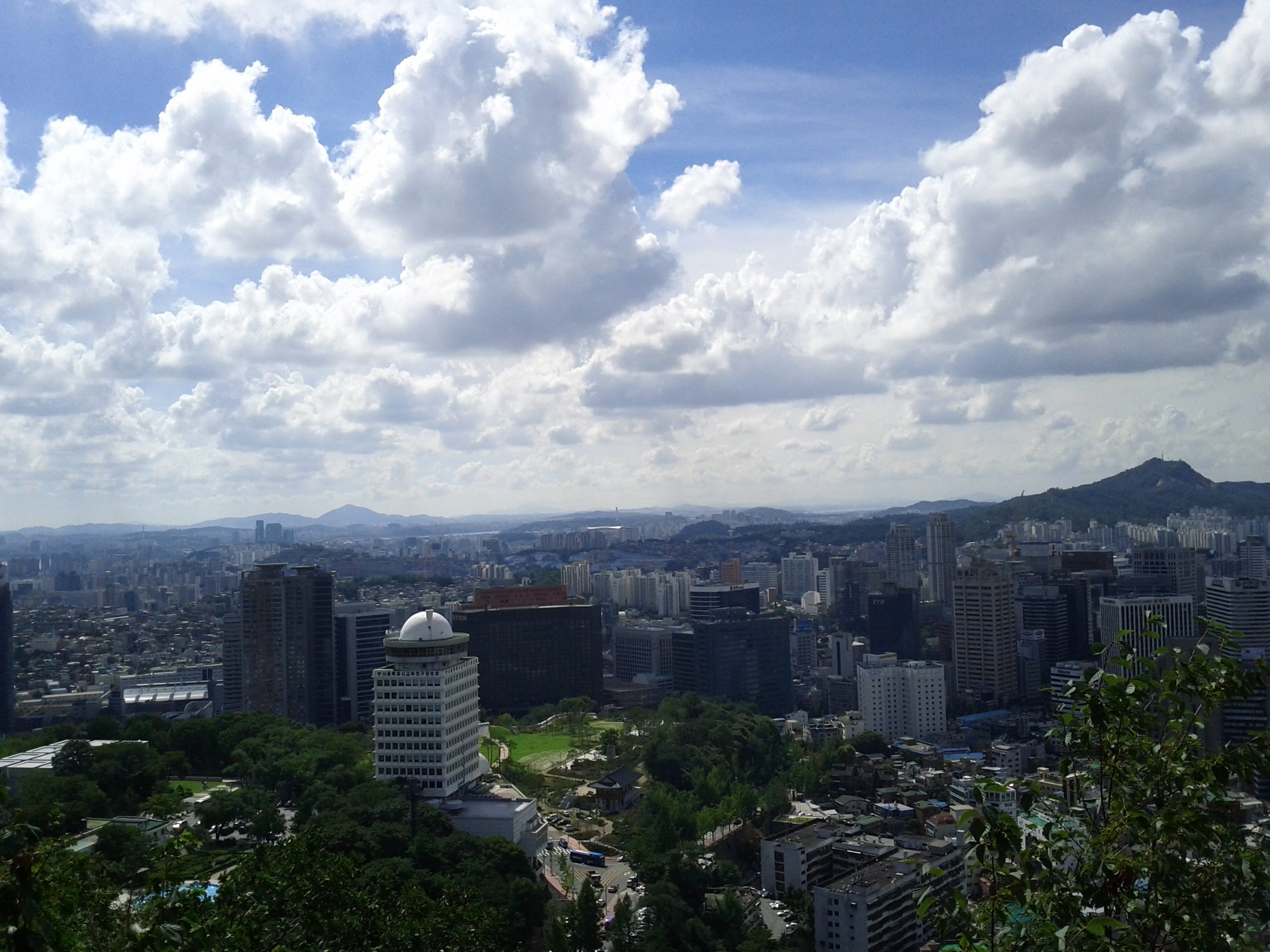 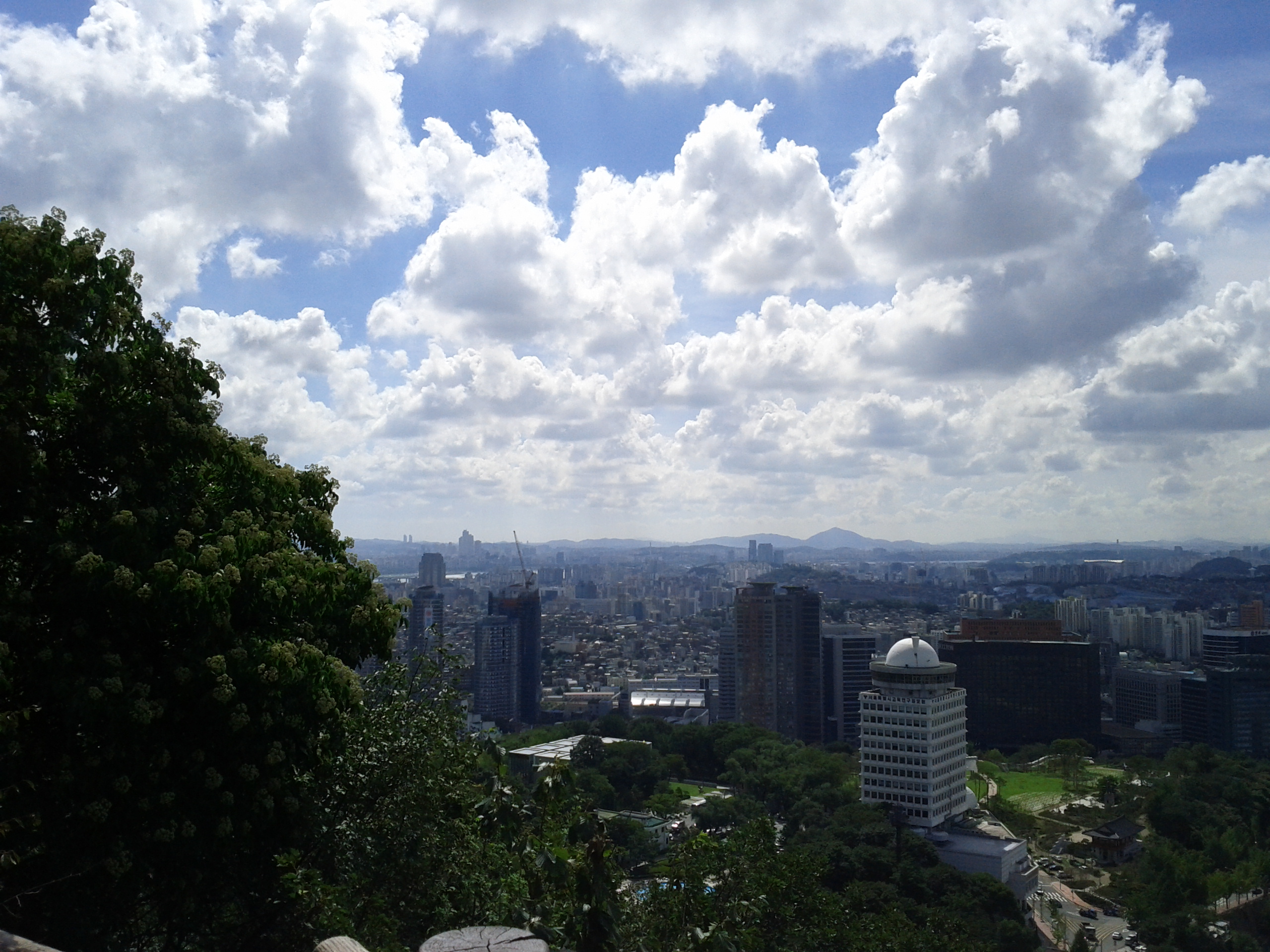