Most of my time this week was spent finishing up this book chapter; meeting with my RA, who arrived on Monday, to finalize our research plans; and conducting our first day of field research and our first interview at Paju. When I wasn’t doing that,I was doing this:

I went with Minhyoung on Sunday to Yongsan, her neighborhood, for dumplings, and then to the National Museum of Korea. It’s interesting to see that they’re building a calligraphy museum (or something of the sort) next door. We also swung by the Han River because I had read an article in Arch Daily just the previous week about Seoul’s Floating Islands, and I was intrigued:

H Architecture in New York and Haeahn Architecture in Seoul collaborated and won a design competition to create the floating islands that will become a cultural icon of Seoul. Programmatically, the islands contain several cultural, educational, and recreational functions. They will be the venue for many featured events in the city. The design concept stems from the stages of a blooming flower: a seed, bud, and blossom. Each of the islands take on the form of one of these stages, manifesting as delicate yet bold structures of glass, wood, and steel. When completed, the islands were named “Sebit Dungdungseom” which translates to “3 Floating Lantern Islands.”

Sounds lovely. But what Arch Daily didn’t tell us is that those islands  — along with the hideous new City Hall addition by iArc — are apparently a sore spot for some locals. They blame previous administrations for pushing through these and other unwanted and unpopular projects. And a day after the Arch Daily post ran, the Korea Times ran a story about the “grave errors” in the Floating Islands project:

The team said that the construction project for the island on the Han River turned out to be riddled with “grave errors” and that it had decided to take disciplinary action against 15 officials in charge of the project. The action will include layoffs, salary reductions and reprimands.

“The project will be recorded as the most problematic private investment project in Seoul’s history,” said Kim Sang-beom, deputy mayor of the city government. “We will correct the inappropriate parts of the contract.” Ouch. I revisited the Han River again today — our first “sunny” day (ha!) in a while — to get a closer look at the Islands. 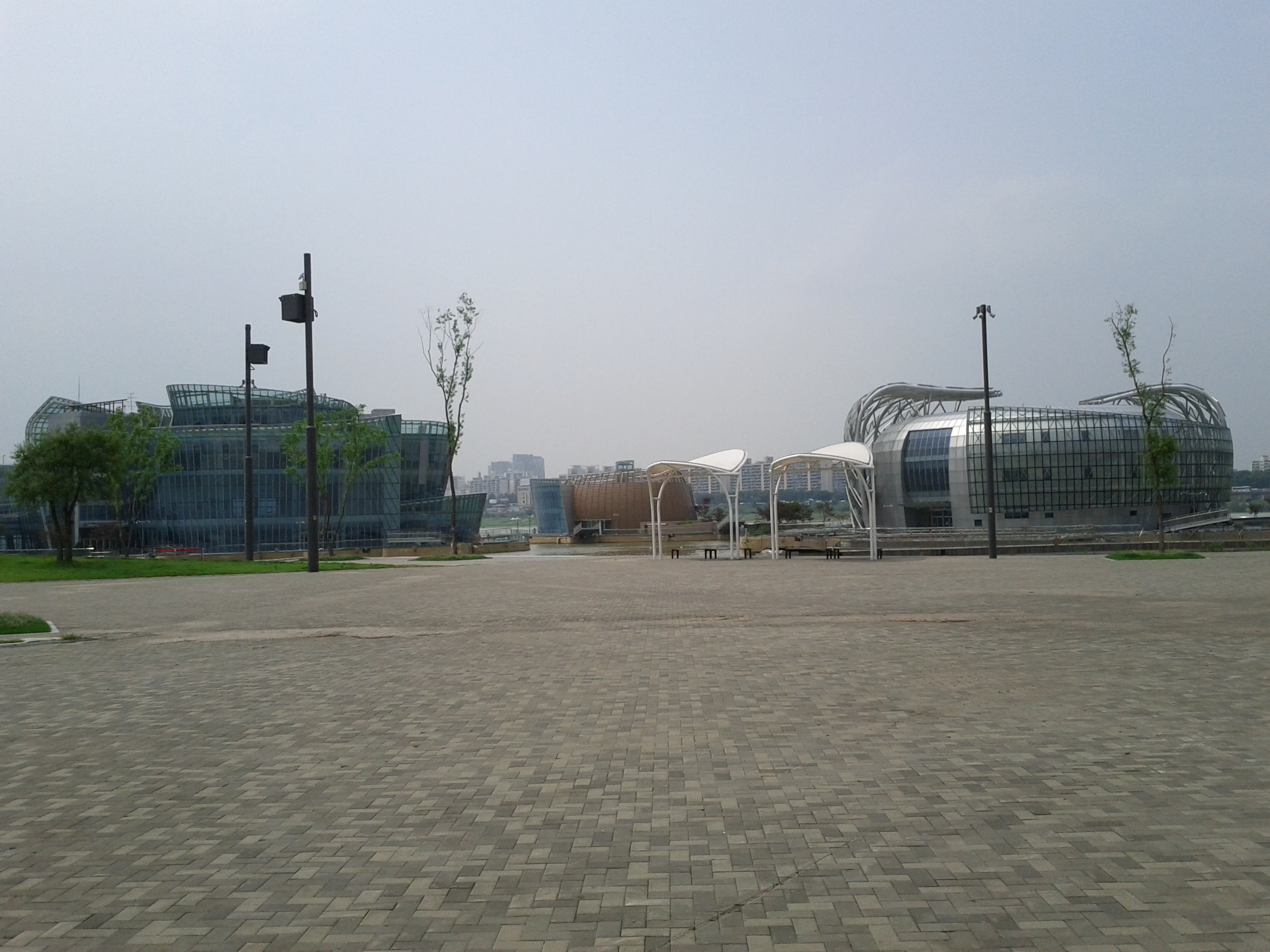 Anyway. Earlier this week I revisited that little village north of the Blue House that I happened upon last week, and discovered that it’s called Buam-dong. I found the Whanski Museum hidden in the hills. It was designed by Kyu Sung Woo, but it looks a bit like the Kimbell Art Museum. I couldn’t find a vantage point to get a good shot: 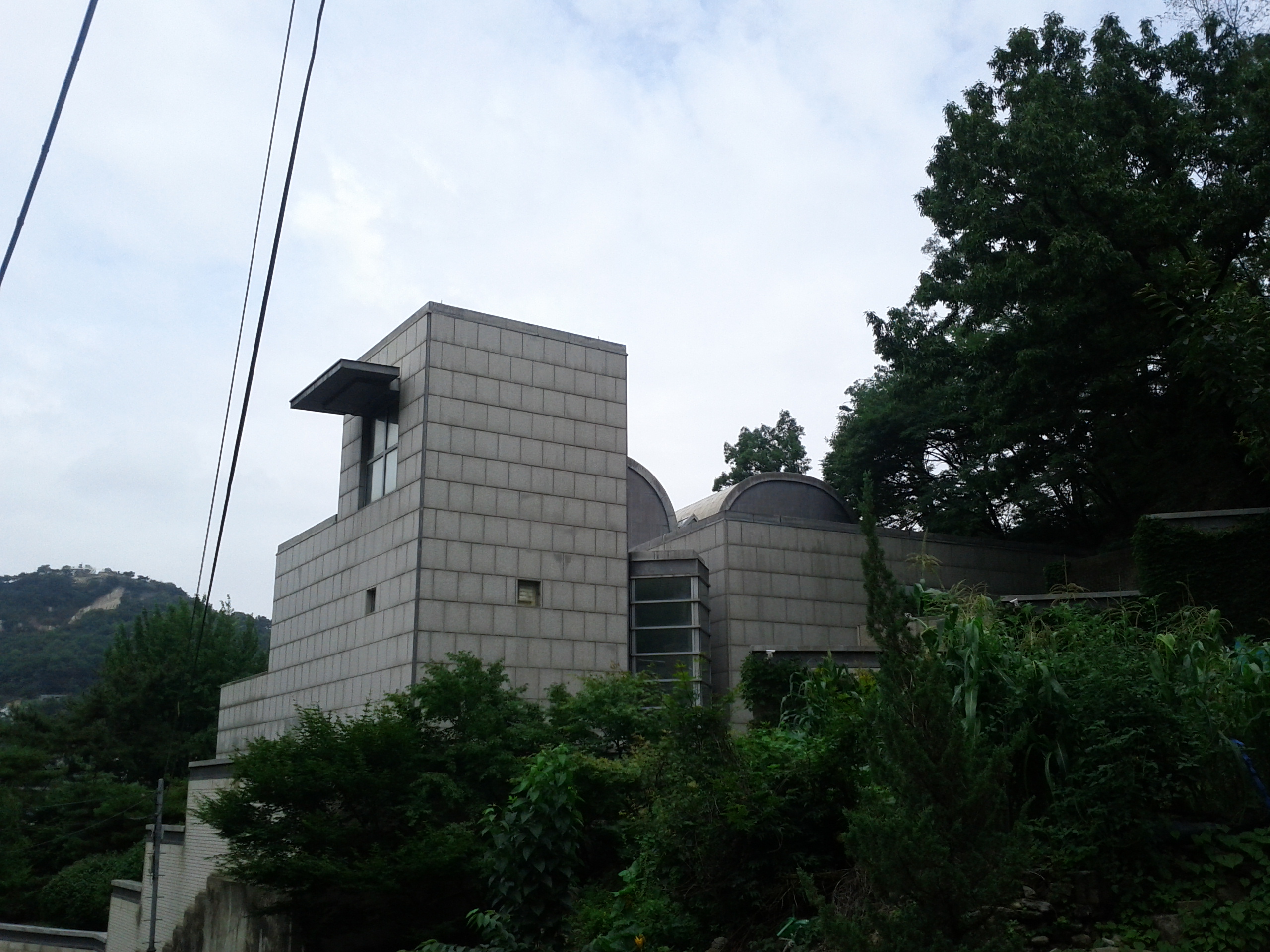 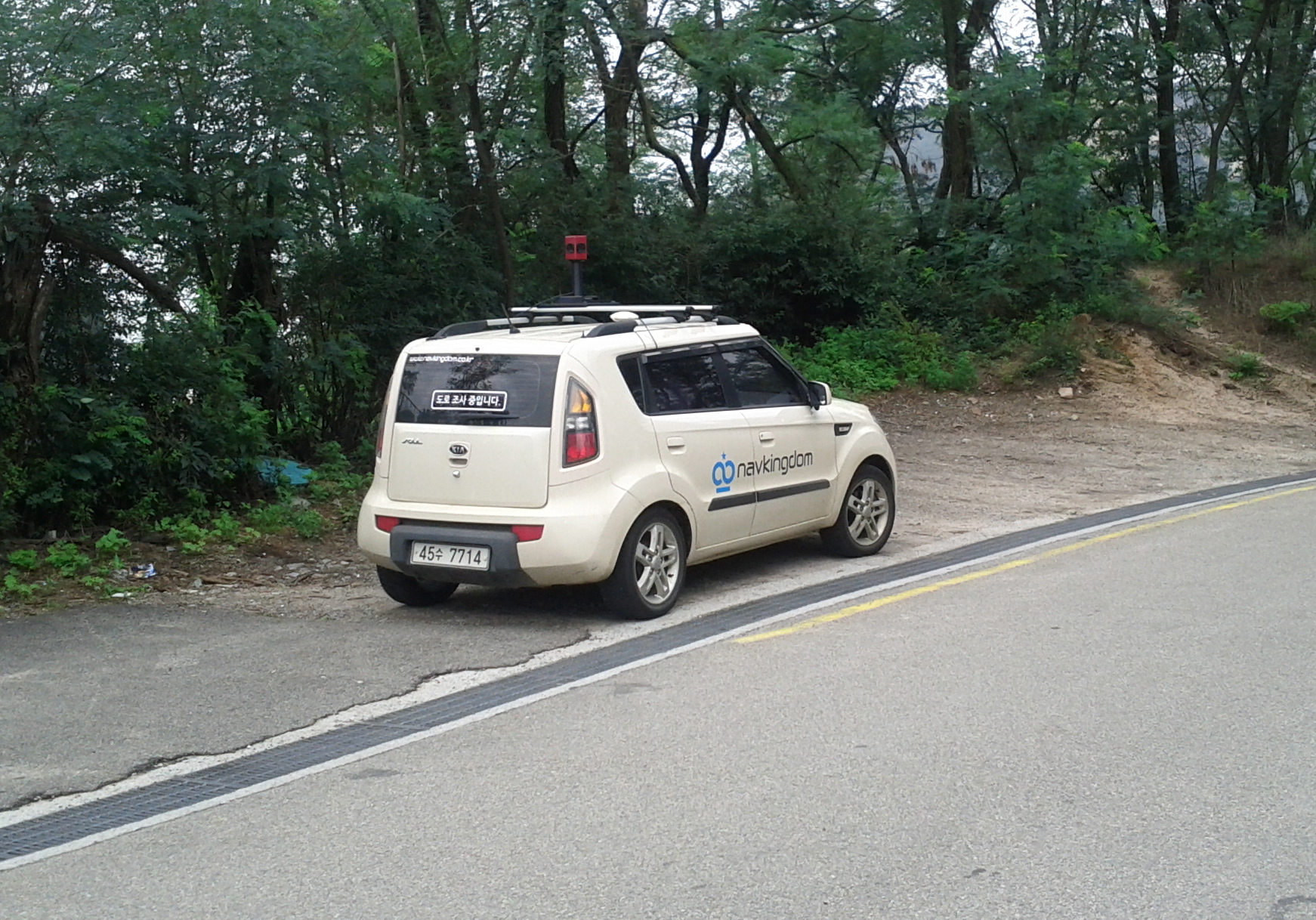 On my walk I also encountered a Navkingdom “streetview” car taking panoramic photos for some company’s mapping system; and a construction site about which I can find nothing online: half is a museum-ish contemporary building; the other half is built into a hill. 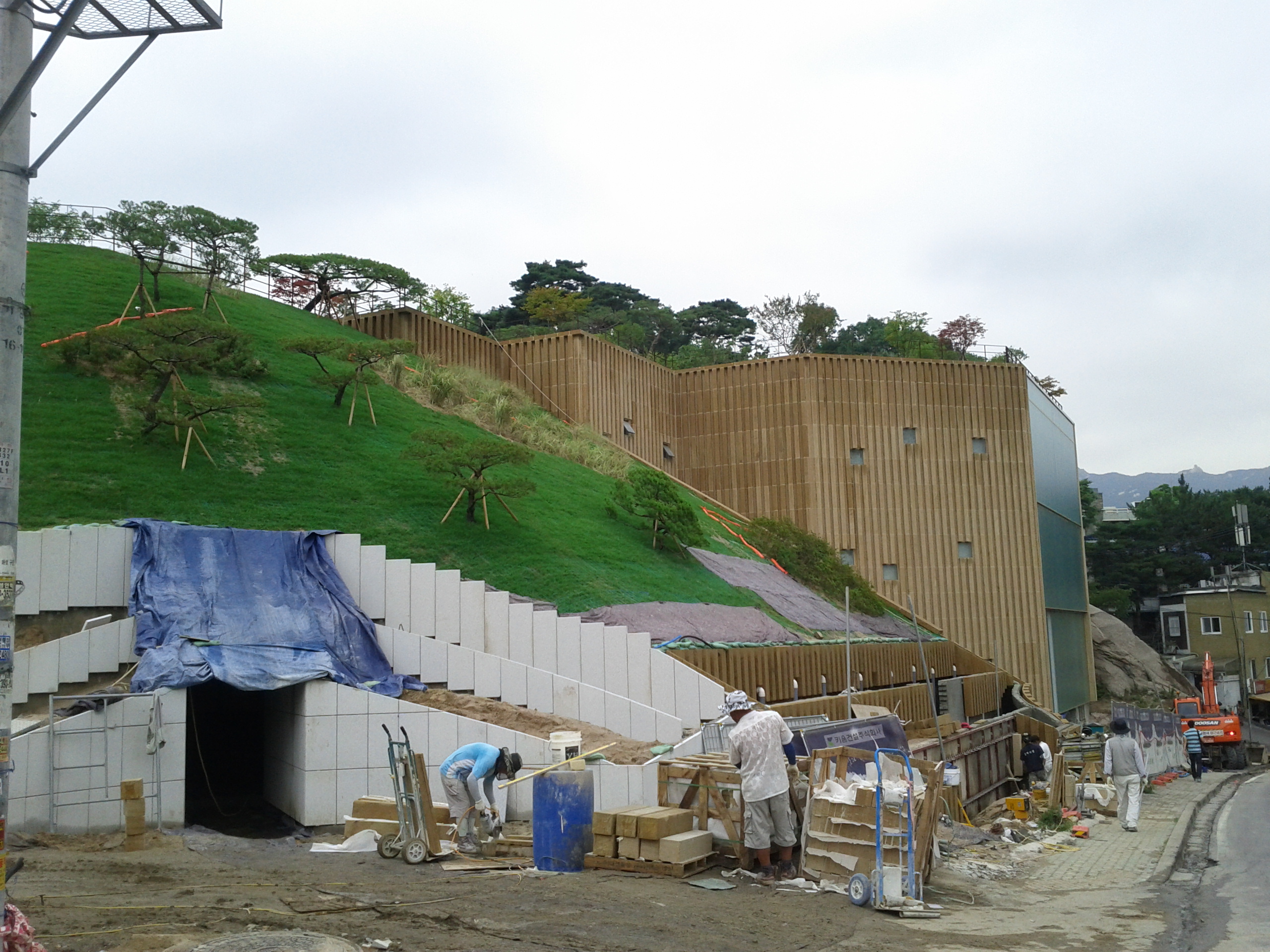 The following days involved some more art. At the Seoul Museum of Art Ran and I saw the “Mapping Realities” show (which mapped Korean politics to art movements) and “Hidden Track” (which I didn’t really get, but which included a few interesting pieces), and then we sat for the entirety of a really nice screening of Asian shorts (about which I can’t find anything online! — but I do remember that Apichatpong Weerasethakul was among the filmmakers).

Several works at in the “Mapping Realities” show were drawn from the archive of Pool art space, in the northern part of my neighborhood, so we headed up there — after some awesome patbingsu at Cafe Spring (our food and the place were so lovely I regret not taking photos!) — later that afternoon. They had a really interesting, if not entirely cohesive, show called “25hr sailing,” which “looks into the Euljiro area for image projection and picks out 3 vanishing points to focus on…: cinema business, printing companies and moon snails.” Disappearing media spaces: right up my alley.

I also dedicated a couple hours one afternoon to a Koolhaas tour — but we had a bit of bad luck. We went to see his art museum at Seoul National University but found a sign on the door indicating that it was closed, unexpectedly, for several days. I’ll have to settle for an exterior view because I’m not heading all the way back to campus again. 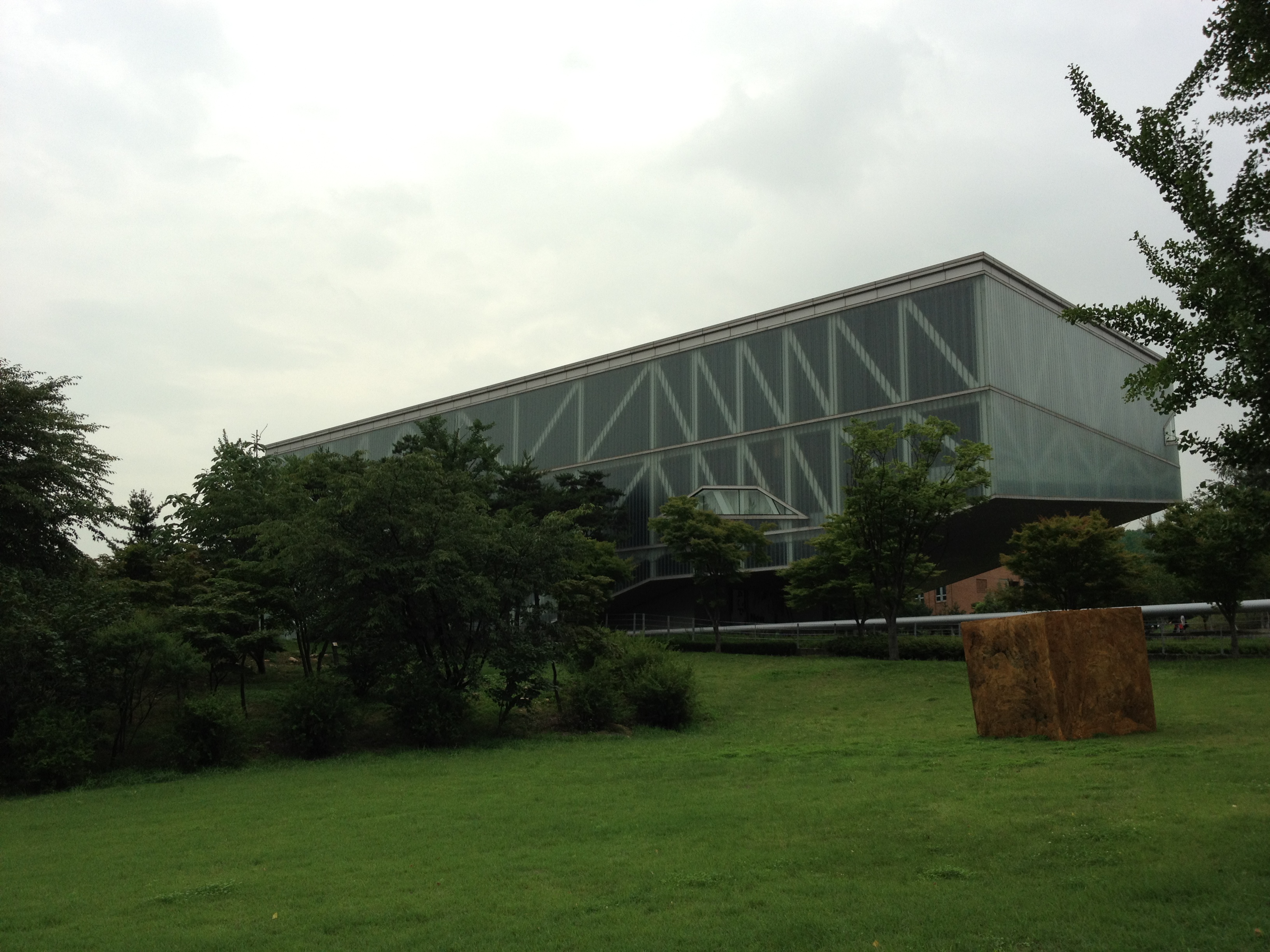 Then we headed to Leeum, the Samsung Museum of Art (I’ve discovered that there’s an implied “Samsung” in front of every institution’s name here), a totally chi-chi space for which R.K. designed one of the three main buildings — but it, too, was closed, for two openings: Art Spectrum, featuring emerging Korean artists; and Pippilotti Rist. The stream of fancy cars kept us from examining even the facilities — so this trip was a complete bust. But I was resolved to return. I couldn’t miss these buildings — nor Pippilotti, namesake of my cat. (Leeum follow-up visit photos below)

The following day we began our interviews, and when they were over we went for lunch nearby in Insadong — which happened to be near Samcheong, where there were a few recently opened shows I wanted to see. So we took an hour to visit Cheng Ran’s “Cinema of Silence” at Arario; Jungmin Ryu’s “The Path of Error” (photocollages we really enjoyed) at Trunk Gallery; and “Desirable Routine” (mostly-Danish-modern-furniture-and-art vignettes, which, again, I enjoyed) at Gallery Hyundai.

The following day we were “in the field” at Paju (about which I’ll write separately) — but before heading back to Seoul, we swung by an observatory to catch a glimpse of the neighbors to the north. Off there in the mist is an Axis of Evil. Can you feel it?

UPDATE: Ran and I revisited Leeum on Sunday. It was well worth the trek. What an impressive space — with three buildings, each of distinctive character, designed by Mario Botta, Jean Nouvel, and Rem Koolhaas — and what fantastic shows! I understand that some folks think of the museum as rather extravagant and showy — and there is indeed a haughty air permeating the space — but I can’t deny that it’s a fabulous museum, and very much accommodating of a wide variety of art forms. I seemed to get in trouble every time I tried to take a picture, so I have few photos to share — but there are plenty of images on the Leeum website.

I really appreciated the modern and contemporary Korean art, much of which I wasn’t familiar with, in this wing. I especially enjoyed Bahc Yiso, Bae Bien-Yu, Jung Yeondoo, and Kim Hong-Joo’s work.

The Koolhaas wing housed the two special exhibitions: ArtSpectrum and Pippilotti Rist. Both were excellent. My surreptitious photos can’t do justice to the multiplanar projections of Rist’s work in the black-box theater. And there were several intriguing and entertaining works in ArtSpectrum: Oak Jungho and Jun Sojung’s work was particularly memorable.

While I thoroughly enjoyed my experience at Leeum, I couldn’t help but sense the tangible agency of the architecture and the institution itself. Guards, ready to offer not-so-gentle directions regarding the proper way to navigate the space, were everywhere. Circulation was carefully calculated and clearly marked, and the space “disciplined” me into compliance. Textures and colors and floor coverings offered material cues regarding proper behavior: you knew where you were supposed to go, how you were supposed to act, where you were supposed to stand to appreciate various works, etc. It was a bit oppressive — but still very much impressive in its punctilious planning and “total design”-ness.