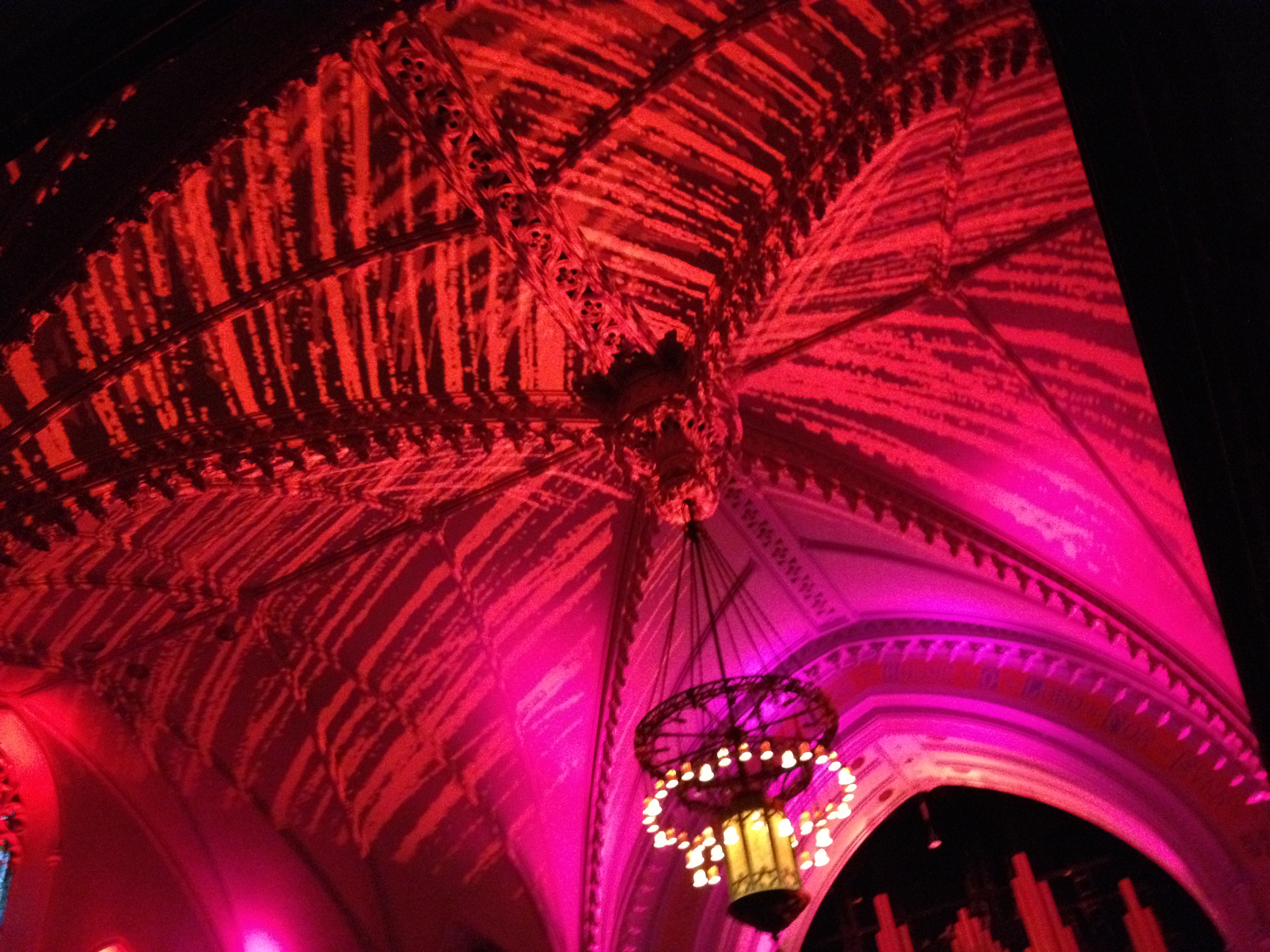 Last night I was prepared for a quiet night, alone, here in Montréal, where I’ve recently arrived for a month-long fellowship at the Canadian Centre for Architecture. A few days earlier, back in New York, I was perusing the schedule for the Mutek festival and came across a listing for this Saturday evening event:

Modern composition and historic location converge in this bold expedition, where two giants of experimentation use church organs and acoustics to transport audiences to another realm.

What this meant was: ambient producer Tim Hecker and guitarist Stephen O’Malley from the “doom metal” band Sunn O))) — which has always been way too much for me to handle — would do something insane in the recently renovated, 125-year-old St. James Church on Sainte-Catherine Street in downtown Montréal. I’ve gone to quite a few provocatively described experimental performances in the past, and I’ve come to realize that, more often than not, the execution falls a little (or far) short of the concept. And when you’ve got a lot invested — a rather expensive ticket, a commitment to sit there for an hour…or two…or three — performances that don’t live up to their own self-description (or hype) can be pretty frustrating.

This Mutek thing carried the same risk. But then Jonathan Sterne told me that he and his partner were going — so I bought a ticket.

For both acts there were patterned and colored lights projected on the vaulted ceiling and the massive pipe organ at the front of the church. When Hecker and O’Malley took the stage — or the “chancel,” I guess — the lights concentrated on the pipes and pulsed, in blood red, throughout their hour-plus set (Hecker’s apparently known for doing shows with low, or no, lighting.)

The relative darkness didn’t mean this was a visually impoverished experience. The lights from outside faintly illuminated the church’s stained-glass windows, and there was enough interior light to make you constantly aware of the spatial volume you were inhabiting, and of its church-like form.

Volume was central to this experience; I’m referring both the kind of volume one associates with “doom metal” — loudness — and to three-dimensional units of space: specifically, the building and the body.

Now, I’m no expert on pipe organs, but the organ is of course an instrument that can be said to have a distinctive relationship to its architectural “container.” When one plays the organ, one also plays the building (in a much more integral, “volumetric” way than we experienced at David Byrne’s “Playing the Building” exhibition a few years ago). Relatedly, there’s a long history of musical composition tailored for performance in particular venues — especially religious spaces (see also Deborah Howard and Laura Moretti’s Sound and Space in Renaissance Venice: Architecture, Music, Acoustics).

Hecker, who has experimented with the organ in previous projects, explained to The Quietus that in this and other performances he’s actually playing a “treated organ”:

It’s a kind of system that relies upon a lot of sounds generated internally through my computer and mixed and effected, and I take microphones, a couple microphones on the pipe organ itself, and run that through my electronic setup and treat it. It comes out of both bass amplifiers, and hopefully a supple PA system in the room itself. So what you hear is mostly the PA, but there’s a blend of organ depending on how intense the sound levels are.

Between O’Malley’s guitar and its various accoutrements; Hecker’s computer, microphones, and amplifiers; the organ; the church’s PA; and the building itself, the performance produced a range of tones and vibrations that migrated throughout the building and our bodies. Particular notes would pulse up from the floor, through my feet; others would shake the pews; others went straight to the back of my throat or into my chest. Others tickled my fingertips.

While my earplugs did little to dampen the extreme sound, it was often difficult to discern particular tones. But I gathered it wasn’t really about tones. The music was often sub-sonic — or non-cochlear, to use Seth Kim-Cohen’s term. My body was simply a volume — a resonance chamber within another architectural resonance chamber — through which this sound passed out into the Montréal night.

I was sitting right across the aisle from the sound guys. My row was partly underneath the balcony, and I couldn’t help but look up on occasion to check for cracks developing in the ceiling. At times Hecker’s processed noise sounded like various materials shaking and shattering — and because it was often impossible to orient oneself in this soundscape, to determine the direction from which sounds were emerging, I occasionally looked over my shoulder expecting to see a stained-glass window exploding.

I knew nothing about the Cathedral Church of Saint James before last night, but then did a little research and discovered that it only recently reopened after a highly fraught renovation. It’s a historic landmark, and I’d imagine that landmarked properties don’t typically open themselves up to potentially roof-raising, window-shattering events. I can’t imagine how this concert ended up in this location — but I’m so grateful it did. Rather than making a “joyful noise,” Hecker and O’Malley gave voice to Revelations. Or Jeremiah: “[W]th the noise of a great tumult he hath kindled fire up on it.”