In my previous post I recapped the first day and a half’s presentations at last weekend’s Network Archaeology conference. Now I’ll try to move a bit more quickly through the latter day-and-a-half. That last post took me a ridiculously long time; this one’s going to have to be more condensed.

Friday afternoon started off with a nice talk by Brian Jacobson on electrical networks at Gaumont studios in Paris, and the links between cinema’s industrialization and parallel developments in science and engineering. Then James Purdon talked about the representation of pylons in the poetry of Stanley Snaith and Stephen Spender. After that, Veronica Paredes shared her dissertation research on the repurposing and mapping of old movie theaters in LA; I’ve heard Veronica speak about this work on a few occasions, and I’m always excited to hear about her progression.

It was about this time that I started to get a bit nervous about my own upcoming talk, so my note-taking was suspended until after my panel.

Later that evening we had Jussi Parikka’s provocative keynote. I’m afraid if I were to try to crystallize his argument, I wouldn’t do it justice. But Jussi offered several important take-away concepts and messages that resonated throughout the rest of the weekend’s conversations, so I’ll list some of those instead:

The next morning I was really out of sorts, so the only thing I remember — perhaps fittingly, given my spaciness — was John Shiga’s super-fascinating, and devastating, presentation on John Lilly’s dolphin communication experiments. Oh, the terrible things we do to to animals.

The highlight of the conference for me was Lisa Gitelman’s “Network Returns” keynote. Lisa’s work has been inspirational to me for years, and I’m always tremendously excited by the creativity of her scholarship. She demonstrates how the tiniest media artifacts — slips of paper, staples, microscopic inscriptions — offer hugely important clues into the way we create, organize, and store information, and how we construct knowledge. Her talk was divided into two parts: one about self-addressing in telegraphy, and the second about the utility pole as neighborhood information hub.

She discussed the 19th-century practice of “having [one’s] name sent” via telegraph as a novelty; people would pay a few cents to have their names sent and returned — a practice that, Lisa says, helped to “make sense of the [new] process” of telegraphy by means of “interpellation.” Interestingly, first and last names had only recently become stable identifiers; before taxation, the draft, credit-reporting bureaus and other bureaucratic institutions required that people have reliable identifiers, there was a great deal of variability in the spelling of their names (she pointed out that, until the late 19th century (?), passport applications made a point of specifying that applicants were to spell their names the same way all throughout the application!). It’s important to consider that proper names held a particular place in telegraphy; because operators had learned to receive messages sonically, and because codes had been developed for routinizing (and abbreviating) messages sent in Morse code, proper names were the only words that had to be spelled out. Self-addressing finds recent-historical and modern-day parallels in the self-addressed, stamped envelope and in DNS debates.

The second part of Lisa’s talk, which made me giddily happy, was about staple-ridden telephone poles. The pole, Lisa said, is “like a tree undone”; she draws parallels between it and the railroad tie, both creosote-treated wooden supports for 19th-century infrastructure. When I see one of these pierced poles, I have to stop and pay my respects. Despite the pockmarks and weathering, they have an air of nobility and worldliness. They’ve sacrificed themselves to perform a public service: it’s here where people post their most intimate public notices, complete with personal contact info — announcements about lost dogs, yard sales, piano lessons (there’s also of course a bunch of crap about escort services and “work from home” marketing shams). They ride the line of legality; posting leaflets is technically illegal, so each staple represents a violation, another blemish in the wood. Bare staples, meanwhile, “trouble the relationship between storage and transmission”; they remind us that the notices posted here are ephemera; they aren’t meant to last. The poles also serve as a conceptual hinge between multiple scales: at the top, where the phone lines and electric wires are draped, the pole represents our connection to global grids of power and communication; but on the ground, at staple-height, they root us in the local. What a gorgeous metaphor — and what a fantastic research subject.

After Lisa’s talk was a great panel with Alex Ingersoll, who drew connections between contemporary locative media and the divining rod; Brooke Beslisle, who spoke about 19th-century photo sets that represented new global networks of commerce and mobility; and Kris Paulsen on the distribution and preservation of guerilla video in the 70s (including work by some of my New School colleagues). 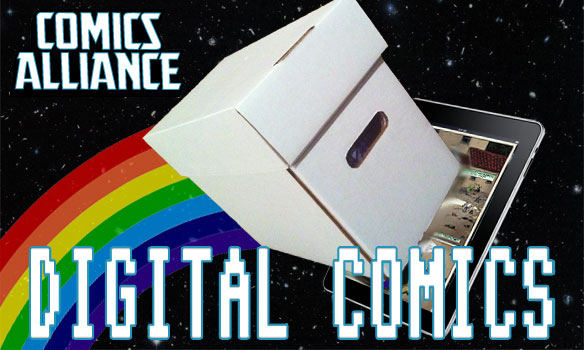 After that, Darren Wershler gave an awesome, and awesomely entertaining, talk on comic book scans, which raised questions regarding the changing materiality of comics themselves; the politics of digital formats (cbr, cbz); and “specific modes of social organization, attribution, and authorship, etc. I was also happy to hear Wershler (who wrote a great book about typewriting) take to task the Manovich model of studying such huge scanned repositories; the focus on mathematical analysis of visual qualities both contributes to “data mystification” and ignores the highly significant material properties of these objects (even in digital form!). Wershler’s presentation reminded me of the work of another of my past thesis advisees; in 2011 Andrew Nealon finished a great thesis on comic subcultures’ agreements on conventions and values in digital reproduction.

Alan Liu had the last word. He spoke first about the Agrippa Files; I won’t recount his comments here, fascinating though they were, since he’s obviously given some version of this talk before. I will, however, outline his recommendations for developing new methods — for analysis, for preservation, etc. — that treat networks as something other than an abstraction; and new techniques for preserving networks as networks:

I’ll leave it at that. I need a Gatorade.