While visiting my parents over Spring Break, I found in the back of my desk a stash of 3.5″ floppy disks containing all my old college term papers. I searched high and low for a computer that still had a floppy drive and eventually found a dusty, wheezing floppy-equipped machine in a lonely corner of my dad’s hardware store. I spent an hour or so transferring all those old files to a flash drive, and in the process I happened upon the papers I wrote for Rich Doyle‘s 1996 “America and Culture of Space” honors lit seminar, in which we dedicated a good part of the semester to Pynchon’s Gravity’s Rainbow.

I was a junior — just emerging from a series of life-altering decisions: first, acknowledging that just because I was good at math and science in high school did not mean I had to attend medical school, and, second, changing my major from chemistry to English. Rich was a perfect “transitional figure”: as a rhetorician of science, he bridged my two interests and helped me appreciate how a “mathematical mind” could be put to good use in studying literature. He was also an absolutely fantastic teacher. I took as many of Rich’s classes as I could; outside of the “Space” course, his “Rhetorics of Life” was one of my all-time favorites (note: I may be misremembering some of these course titles).

I very fondly remember struggling through Pynchon and feeling such a tremendous sense of accomplishment when I got to the final page and made a little checkmark in the margin beside “There is time, if you need the comfort….” This was the important labor of the English major. I’m sure I grasped very little of what Pynchon was after in this 760-page beast — but many of the themes I traced through Pynchon, and the interpretive strategies I experimented with on GR, have informed my thinking to this day.

Pynchon’s been popping up in my life a lot lately. I’ve been following James Bridle’s The New Aesthetic for some time, and I’ve seen lots of “visual resonances” of Pynchon’s “machine thinking” throughout the project. The New Aesthetic was the subject of — or inspiration for — what seems to have been a monumental panel at SXSW this week, and it turns out that at least one of the panelists, Aaron Cope, took on Pynchon directly.

He — Pynchon, not Cope — appeared again last night, on a bus that brought me back to the city from Pennsylvania. I was reading in preparation for today’s first meeting of a new Post-Hermeneutical Reading Group at NYU. One of the assigned texts was Kittler’s “Media and Drugs in Pynchon’s Second World War,” in which Kittler examines how Pynchon “employs other [medial?] narrative techniques in gathering the traces of the second and technological World War” (104). Kittler variously presents GR as a process/product of “data retrieval” in its mining of various documentary sources; as a print-based endeavor, in its reliance on circuit diagrams and organizational charts and paper files; as filmic in its engagement with “time axis manipulation”; and as musical, as a record whose “grooves capture the vibrations of real bodies…ravaged…by wars and drugs and media” (115-6). 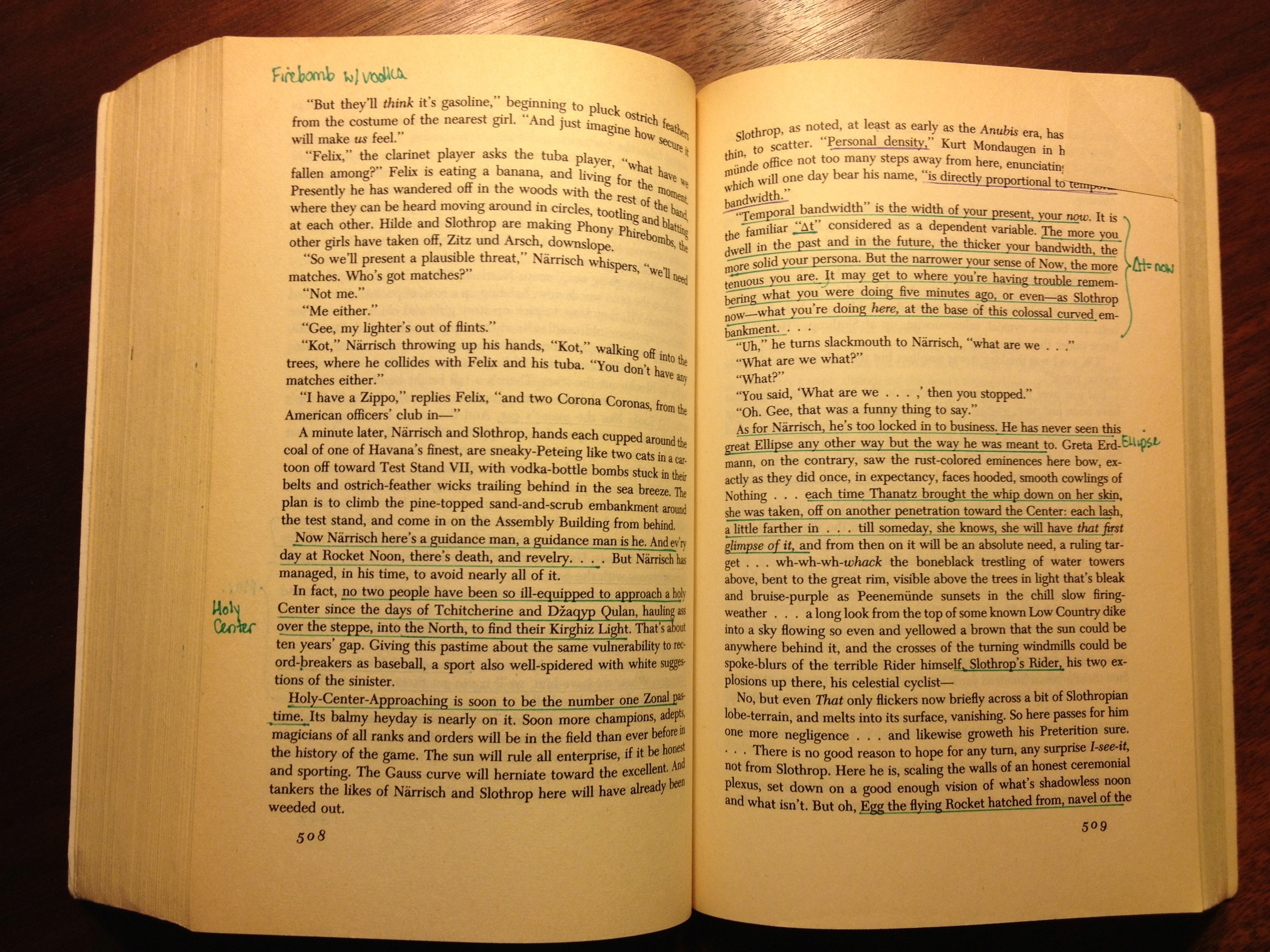 I’d have to re-read Pynchon to really engage with Kittler’s claims — but I do recall, from my first encounter with Pynchon way back in 1996, being blown away by the various temporalities and “medialities” of the narrative. Here’s a little of what I found on one of those old floppy disks; it’s my 19-year-old self grappling with parabolas, technologized vision, and postmodern fiction. Please don’t hold me accountable for any bullshit; I was just a kid!:

Throughout Thomas Pynchon’s Gravity’s Rainbow, the symbol of the double integral, ∫∫, appears in architecture, mathematical computations, and discussions of time, rocketry, and history….

Integration’s roots lie in circumscription, the process of dividing the area under a curve into rectangles of equal width and height y=f(x), finding the area of each of those rectangles, and summing the areas to find the area under the entire curve.  Suppose the y axis represents time, and the width of each rectangle under the curve represents some ∆t, a period of time. This compartmentalization of time into minutes, hours, days, weeks, months, years, etc., governs how an individual is grounded in the now. The shorter the ∆t in which an individual exists, the less that individual bases him or herself in the past or the future. As ∆t approaches zero, the now comes to encompass only the present moment.

Kurt Mondaugen explains that temporal bandwidth, or ∆t, refers to “the width of your present, your now” (509).  A thick bandwidth indicates that the individual strongly roots himself in his past and future.  The individual therefore possesses a “solid…persona” (509).  A thin bandwidth, on the other hand, implies that the individual lives entirely in the immediate moment and therefore possesses only a tenuous grasp on his self.  Pynchon thus claims that in order for an individual to fully understand himself, he must synthesize his past, present, and future selves into one comprehensive identity.

The principle of integration, however, demands that ∆t approach zero to obtain an accurate measure of the area under a curve.  Because Pynchon’s fictional society relies so heavily upon the integral, characters live only in the moment at hand, and consequently have little control over self-definition.  Characters instead turn to hallucinogenic drugs, masochism, Pavlovian conditioning, film-making, and other supposedly empowering activities to create the “illusion of control” (30).

The drug Oneirine creates a sensation that resembles “stuffing wedges of silver sponge, right, into your brain” (389). These wedges of sponge induce a time modulation not unlike that created by integration. Just as the infinite rectangles under the parabola isolate each moment into a distinct ∆tn, the sponges in the brain isolate each moment of experience into distinct frames of awareness. Only the immediate moment enters the individual’s consciousness. He does not know what has come before and what will follow.

Pynchon associates the silver sponge not only with Oneirine, but also with film-making (early forms of film supposedly resembled silver sponges [?]).  Pynchon refers repeatedly to the compartmentalization of time into the frames of a film. We learn of the connection between “the German mind and the rapid flashing of successive stills to counterfeit movement,” a technique eventually “extended past images on film, to human lives” (407).

Weissman employs the “successive stills” technique in arranging Pokler’s yearly visits with his daughter, Ilse. For each of six years, Pokler falls in love with a new Ilse. Weissman creates for Pokler “the moving image of a daughter, flashing him only these summertime frames of her” (422). Film is thus Ilse’s sole medium of existence. She, like the mental images of an Oneirine addict and the rectangles under a parabola, exists only in finite frames of time. Because she dwells outside the context of a time continuum, Ilse is not a complete person; she has no comprehensive identity.

Scientists use this integration film technique to study the rocket’s flight pattern. In addition, the A4 rocket itself features a double-integrating circuit guidance system. Integration therefore forms the foundation of Pynchon’s Rocket State. “In the dynamic space of the living Rocket, the double integral has a different meaning. To integrate here is to operate on a rate of change so that time falls away: change is stilled” (301). Integration’s time modulation properties thus transfer control of the Rocket from humans to the Rocket itself; the Rocket has “a life of its own” (301).

The Erdschweinhohle, inhabitants of Pynchon’s Rocket State, direct their lives in pursuit of the ultimate integration: “the Eternal Center,” or “the Final Zero” (319). In their attempt at racial suicide, time withers away. Racial suicide thus involves integration until ∆t reaches zero. At the point at which time no longer exists — “the Final Zero,” the Brennschluss point — history also disappears. The Erdschweinhohle’s temporal bandwidth dwindles to the immediate moment, and finally to zero — extinction.

The tribe’s pursuit of “the Eternal Center” seems an attempt to regain their “Pre-Christian Oneness” (321). Colonizing societies corrupted the Erdschweinhohle tribal identity. However, because “there is no more History,” there exists “no time-traveling capsule to find [their] way back” to the “Pre-Christian Oneness,” their previous identity (303). Uncertainty plagues the Erdschweinhohle, now “Europeanized in language and thought” (318). “Some still live, some have died, but many, many have forgotten which they are” (303). Colonization of the Rocket State has thus led to a confusion of identity and an export of tribe’s power to redefine that identity.

Integration seems a panacea to Pynchon’s characters. Inhabitants of the Rocket State hope that the elimination of a time continuum through integration will restore control over their own lives and over the practice of self-definition. They hope that by experiencing events outside of their contexts they may impose a self-created meaning on the events. The resultant power of this practice is, however, “a control that is out of control” (277).

[This conclusion is particularly cringe-worthy:] Only upon accepting randomness and chance as the true loci of control will the Rocket State regain security. The inhabitants must realize that events need not fit an equation, that they need not create a certain mathematical function. Events often fall into a Poisson distribution, in which there is neither pattern nor predictability. These random events, for which there exits no mathematical function, cannot be integrated. One must therefore decipher these experiences in their original contexts of space and time. The individual may then synthesize the past, present, and future into a complete whole to create a secure identity.