I have a long list of article and book ideas — definitely more than I could even hope to accomplish in my lifetime. Near the top of that list — which means it’s been there for a long time — is “do something about Dexter Sinister.” That sounds mildly threatening — but by “do something” I don’t mean “call the authorities on them” or “have them evicted.” I mean “write something.” I’ve been admiring Bailey and Reinfurt for years; I go to their events, buy their books, see their shows and performances. I think they — along with James Bridle and Craig Mod and a handful of other critically engaged designers — offer some of the most provocative and compelling ideas about the future of print, the book, the document, writing, reading, distribution, circulation, etc.

When I found out that DS were among the artists that Tom McDonough would be discussing tonight in his Hilla Rebay lecture at the Guggenheim, I was totally psyched. A lecture titled “The Artist as Typographer” would’ve piqued my interest regardless of the artists it focused on — but the fact DS that were among McDonough’s case studies was certainly a draw.

I’ll attempt to synopsize the lecture below. My writing hand is terribly out of practice, so I often found myself falling behind with my note-taking this evening — which means I inevitably missed some bits. But, for my own benefit — and perhaps for others’ — I’ll recount as much as I can:

McDonough is interested in language as a material form in contemporary art. In recent years there’s been a proliferation of artwork that employs typography and print — e.g., the work of Shannon Ebner (about whom McDonough wrote a great piece in Artforum in 2010), Adam Pendleton, Matt Keegan (and Ron Terada, whom McD mentioned only briefly at the end — and whom I happened to have discovered at the MCA in Chicago last week!). These artists are interested in language’s “material realization.”

Historic precedent — Herbert Bayer, Karel Tiege, Bauhaus, Dada, Fluxus, etc. See also Mary Kelly, Renee Green (both of whom, it seems to me, are interested in systems for organizing texts)

Recent work explores language and materialism — sign as a physical form, language as object. The artists McD features are “practitioners of wild semiosis.” Overview of Saussure — focus on arbitrariness and relational nature of language and meaning; sign as merely a “psychological entity.” S’s model notably omitted vision — the graphic (he regarded writing as a signifier of the signified, speech); the “mode of inscription” of the sign is irrelevant.

These new artists attend to vision — and space. They prioritize the mode of inscription.

Parallels between the work of Shannon Ebner and Ed Ruscha.

From Benjamin’s One Way Street:

Script — having found, in the book, a refuge in which it can lead an autonomous existence — is pitilessly dragged out into the street by advertisements and subjected to the brutal heteronomies of economic chaos. This is the hard schooling of its new form. If, centuries ago, it [writing] began to lie down, from the upright inscription to the manuscript lying on the slanting desk, in order to be finally bedded flat in print, it now begins just as slowly to lift itself up from the ground again. Already the newspaper is read more in the vertical than in the horizontal; film and advertising finally push writing into the dictatorial vertical position.

This new art, in a sense, makes language rise again. McD suggests, if I understood him correctly, that this “hard schooling” leads to print’s “return to public significance.” [If you follow the Benjamin passage a bit further, he talks about how the “card index marks the conquest of three dimensional writing.]
McD suggests that these new typographer-artists call attention to, or perhaps revive, this three-dimensionality and materiality by focusing at times on the “material evidence of the hand’s crafting of language” (see Evans’s embroidery at the top of this post.)

McD then turns to Ebner’s interest in the slash, and draws a parallel to the slash in Dexter Sinister’s heraldic shield. Brief history of DS.

They coordinate print production operations on a “horizontal plane.” [I want to think about how their Serving Library (an exhibition of which I visited last month) fits into all this.] Are they importing post-Fordism into graphic design? Given their description of their design process in terms of references to efficiencies (?) and feedback loops, one might think so — yet McD argues that their goal is not to promote efficiency but “autonomy” and a measure of self-sufficiency.

McD relays how DS’s David Reinfurt critiqued Adam Pendleton for his use of Arial, “a half-resolved typeface, a debased Helvetica at best, produced in the service of IBM and Microsoft! Come on.”

[I’m afraid I was too busy catching up with my note-taking to pay proper attention to McD’s discussion of Pendleton.]

Much of Matt Keegan’s work features messages of negation — “no no no,” “nothing to declare,” “it goes without saying,” “it’s not you, it’s me”… McD focuses on the work’s sculptural qualities. 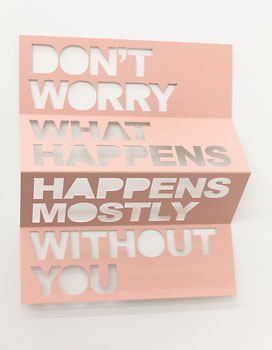 [I think using only art historical models and thinking of the dimensionality of Keegan’s work — of any of this work — as sculpture, means that we miss an opportunity to look at it as media. I mean, just look at Don’t Worry: it’s a folded sheet of pink paper. That’s significant. I’d imagine Keegan didn’t choose pink paper, and fold it, simply to highlight paper’s sculptural qualities. He chose it because of its particular properties as a medium. It seems obvious to me that Keegan’s thinking about medium specificity; consider his Picture Perfect, below.] 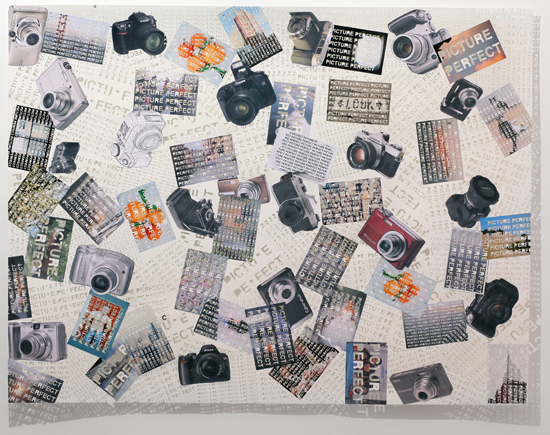 Finally, why the “typographic turn” (oh, another turn!) now?

McD concludes by stating that much of this work exmphasizes the fungibility of language [,which I’ll buy] — and the capacity to transform this fluidity into the formation of new collectivities [,which I’m not so sure about; I really don’t see that here. Thanks perhaps to relational aesthetics, It seems that all art anymore has to somehow promote the creation of “new collectivities” or “new forms of sociality.” I really don’t think everything‘s about the social. Sometimes, I think work is often, and just as validly, about the material — the stuff in and of itself.]

And I’ll leave it there.