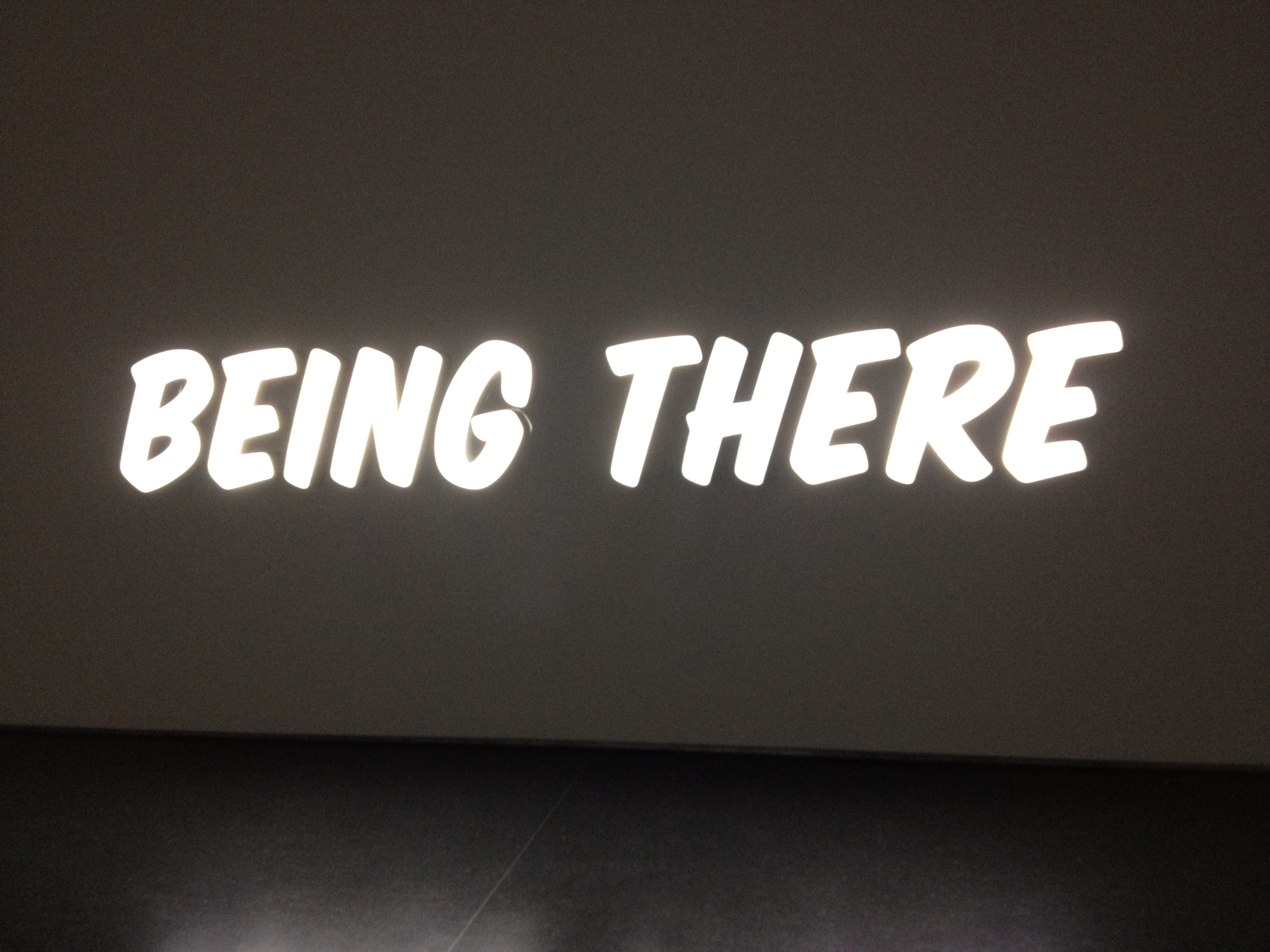 We just returned from a week in Chicago. Most of our time was dedicated to family (my husband’s family lives there), but we managed to spend a few afternoons downtown. I had never visited the Robie House, so we did that. And I finally found a Chicago pizza I like, although it’s more New Haven than Chicago style (I’m in Wicker Park so often — how come I’d never been to Piece before?!). I also tried to visit the Read/Write Library, the former Underground Library, in their new home in Humboldt Park — but unless I was confused, they seem to have gone back underground; the place looked vacant.

I did manage to visit one of the other libraries on my list: the library at the Poetry Foundation’s new home. I’ve studied a few other poetry places — the Alvar Aalto-designed Woodberry Poetry Room among them — and I was eager to see how the Foundation would translate Harriet Monroe’s mission “to give to poetry her own place,” into architectural form.

The building, designed by local architect John Ronan, sits on the corner of West Superior and Dearborn. It’s a glass box within a box — a little Beinecke-esque, I suppose, in that the inner box displays the books — but here the interstitial space, in-between the outside and inside boxes, is still exterior. The outer black zinc screen wall surrounds a garden (which looks a little barren in these winter months, and whose pavers can get mighty icy), with a cut out on the corner to invite passage through to the building’s entrance. 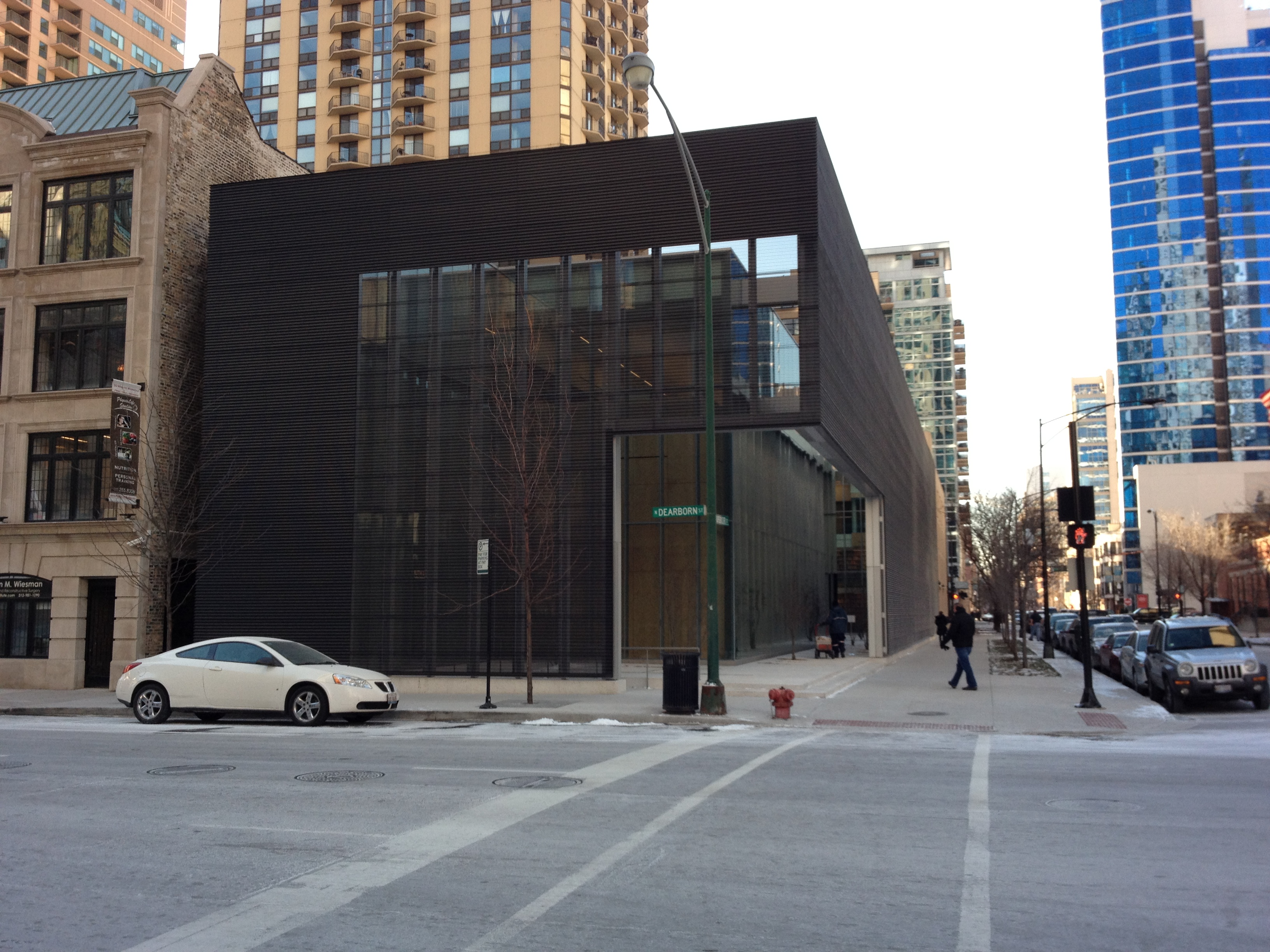 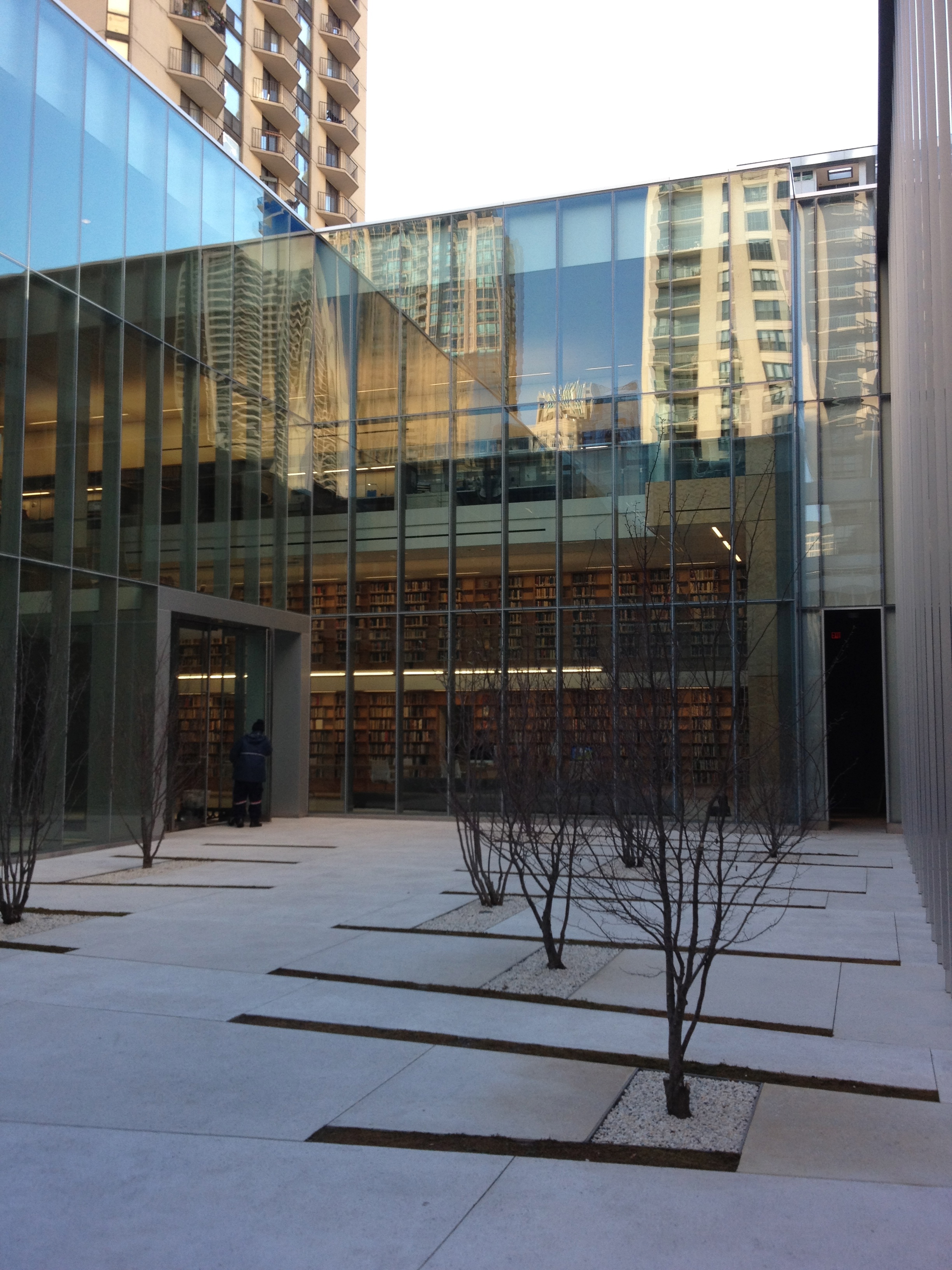 In all the press coverage I’ve read of the new building (there doesn’t seem to be much), and in the Foundation’s own promotional material, Ronan is quoted as describing the garden as an “urban sanctuary, a space that could mediate between the street and the building, blurring the distinction between public and private.” Ah, the old “blurring the boundaries” schtick! I’ve heard that one before! I was hoping for a slightly more poetic, and original, articulation of the design concept. Nevertheless, the “sanctuary” description does seem apt; it is remarkably peaceful inside the garden — thanks, no doubt, to the fact that this stretch of Superior seems relatively calm. 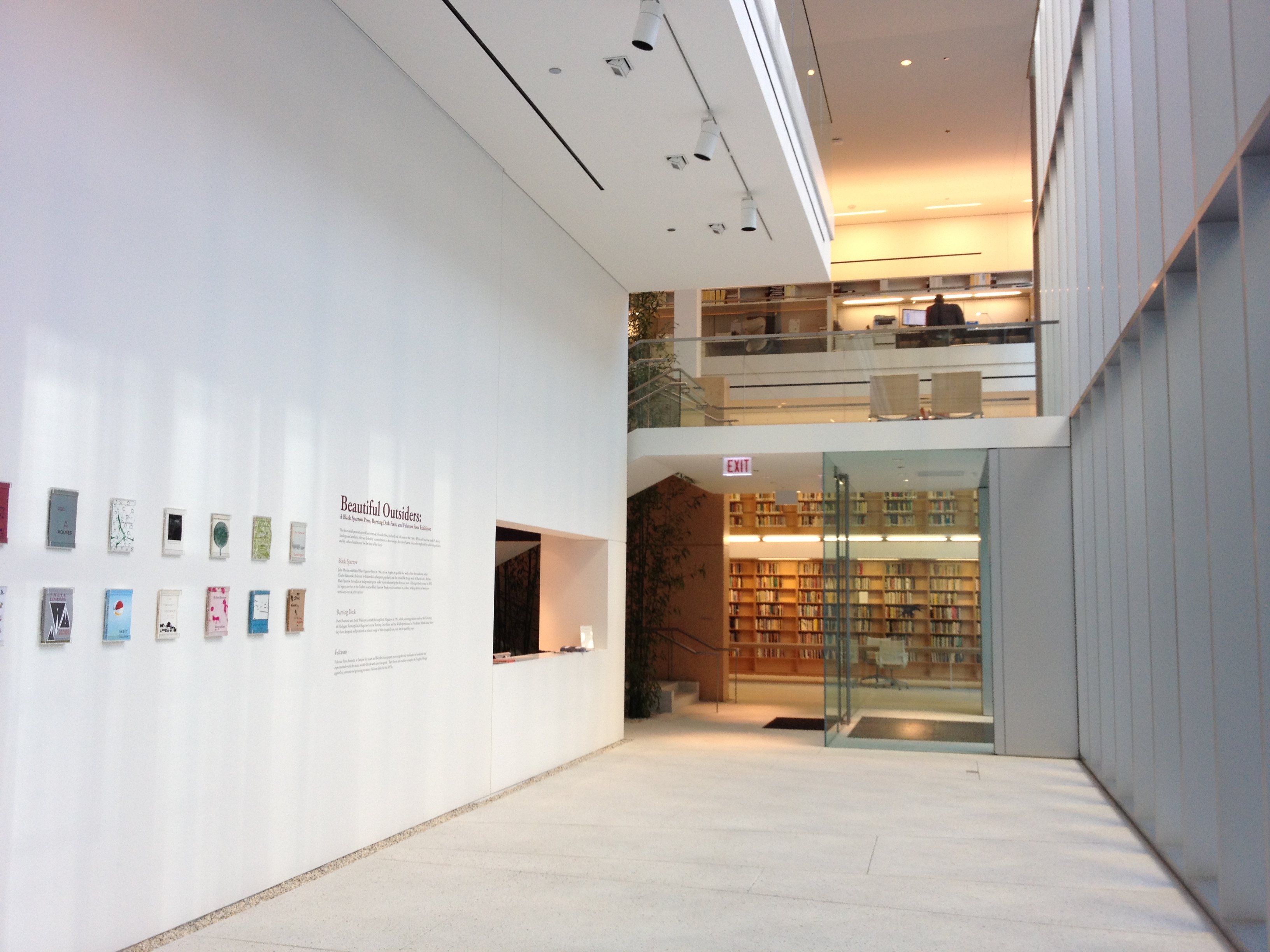 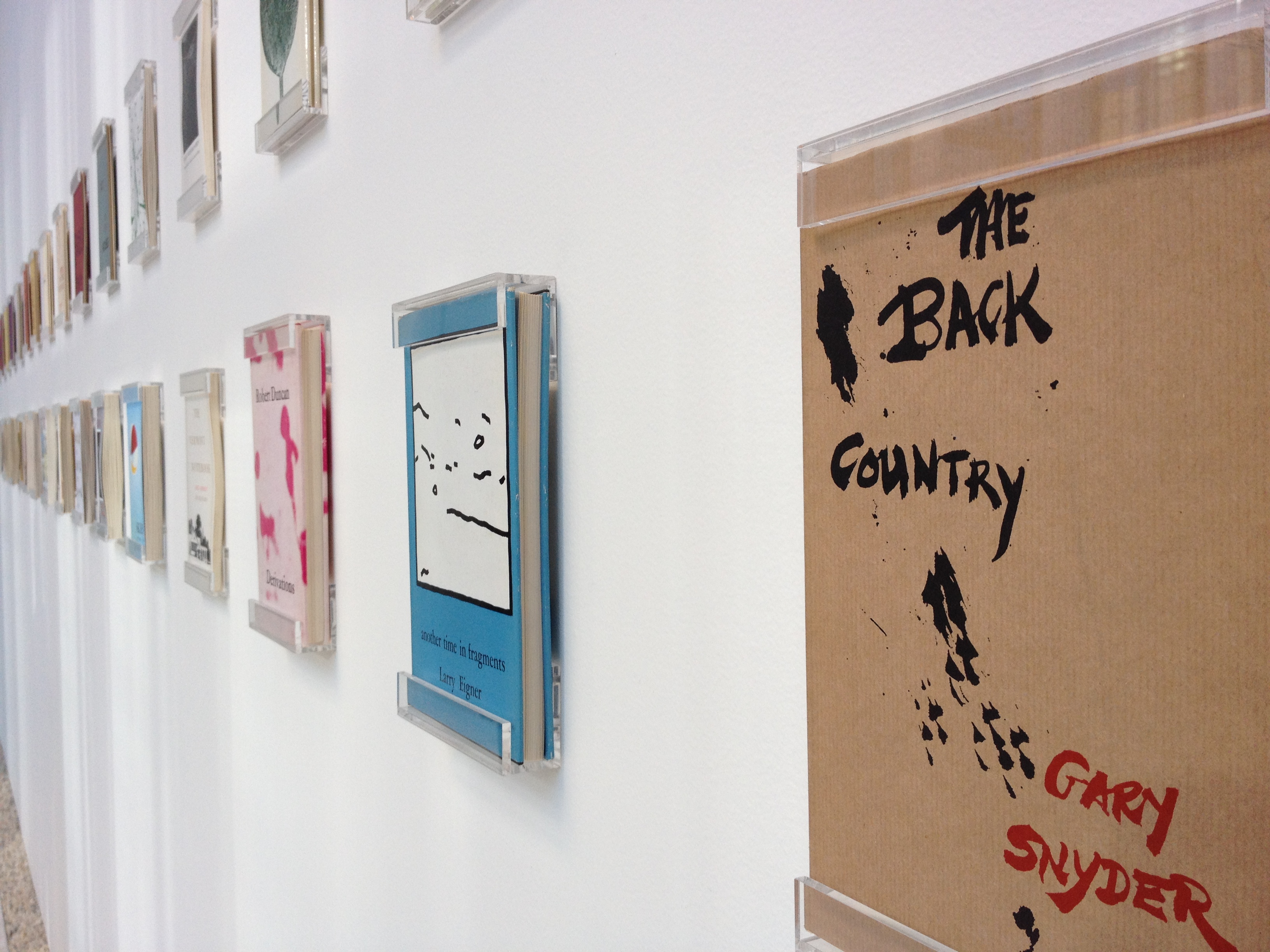 In the lobby is a reception desk and an exhibition space, where the work of Black Sparrow, Burning Deck, and Fulcrum presses, each noted for its identifiable visual aesthetic, was on display. I admired not only the striking cover designs, but also the clever clips used to mount the books on the wall.

All the building’s public functions — in addition to the exhibition space, a performance hall and the library — are on the ground floor, off the lobby. But leading up the stairs, toward the private spaces where the Poetry magazine and foundation staff work, we see Harriet Moore’s declaration that Poetry should be an “open door” — a convenient metaphor for this new glass building that puts the poetic object on display.

The Open Door will be the policy of this magazine — may the great poet we are looking for never find it shut, or half-shut, against his ample genius! To this end the editors hope to keep free from entangling alliances with any single class or school. They desire to print the best English verse which is being written today, regardless of where, by whom, or under what theory of art it is written. (Moore, 1912) 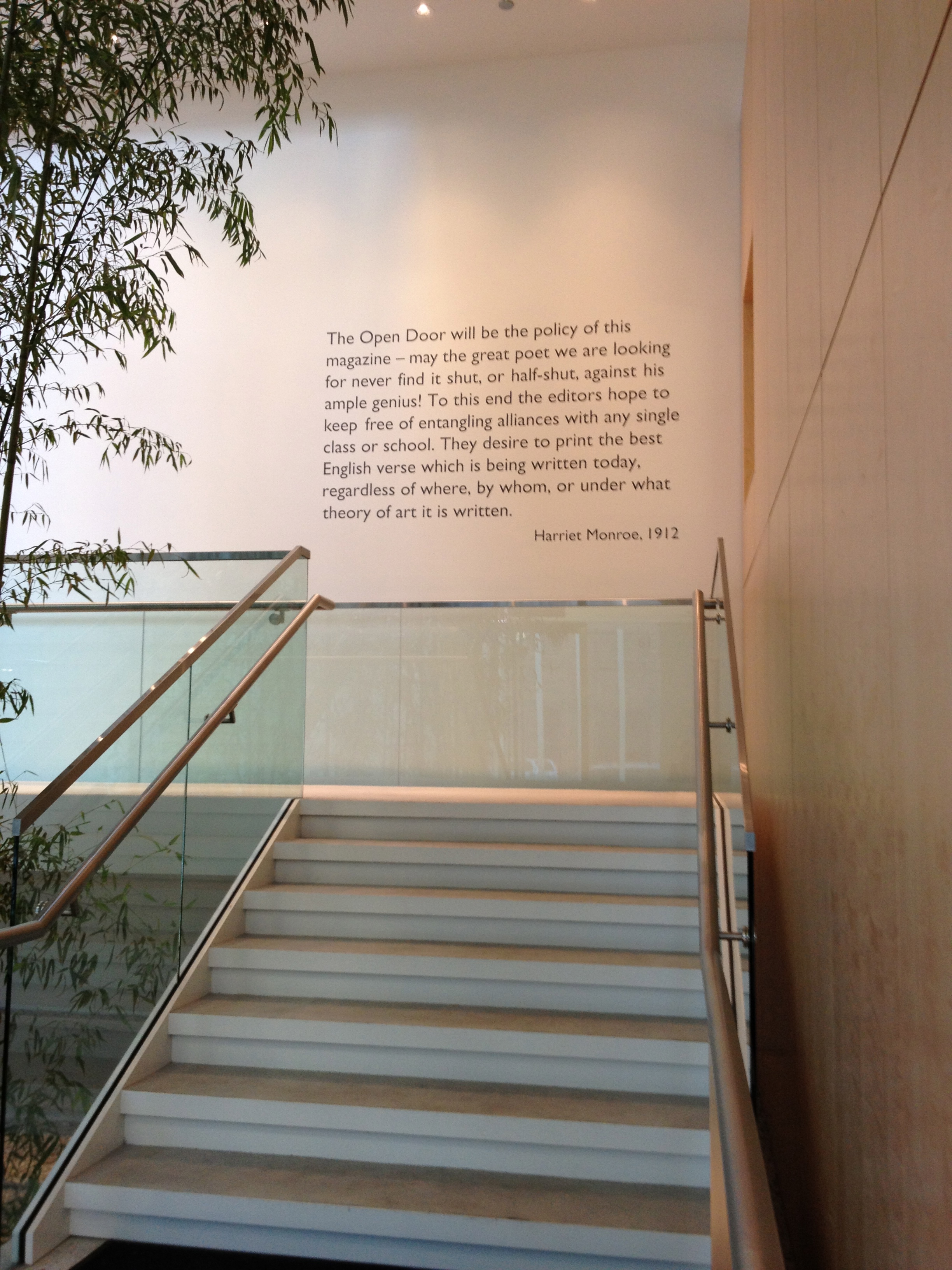 The library itself, with its 30,000 non-circulating volumes, is clean and bright, but a bit sterile (to be expected of a building funded by pharmaceutical money?; those critical of the gift might say so). There’s a palpable tension between rarefaction and accessibility, which perhaps echoes early Poetry‘s negotiation of the values of high modernism with Moore’s “open door.” 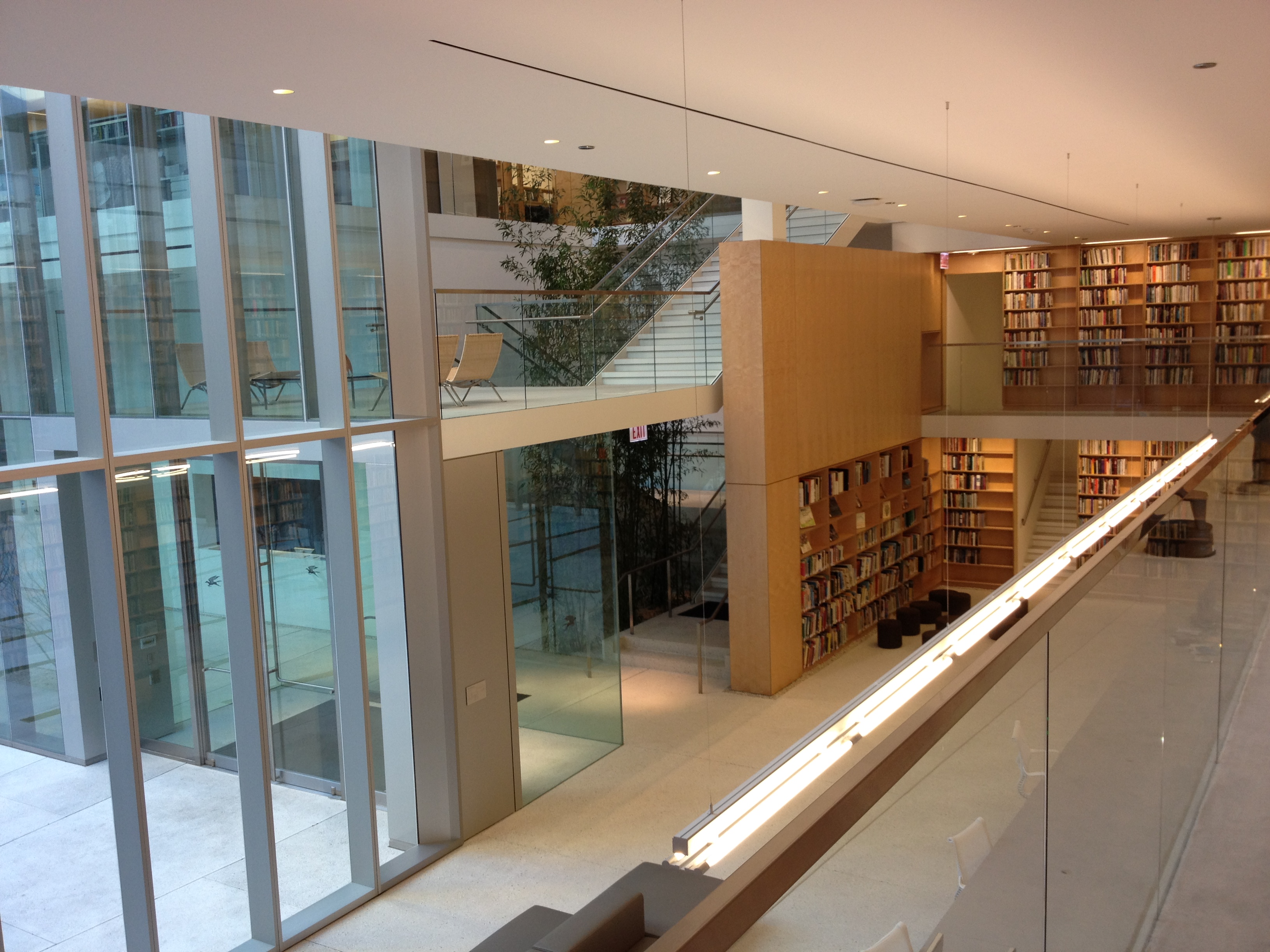 In my quick visit I did discover a few fantastic books I’ll look for back in New York — but aside from the books themselves, the warmest, most charming things in the room were these lovely reminders that poetry — both in an abstract sense, and concretely, as it takes form in Poetry magazine — is a sensory, dimensional thing: 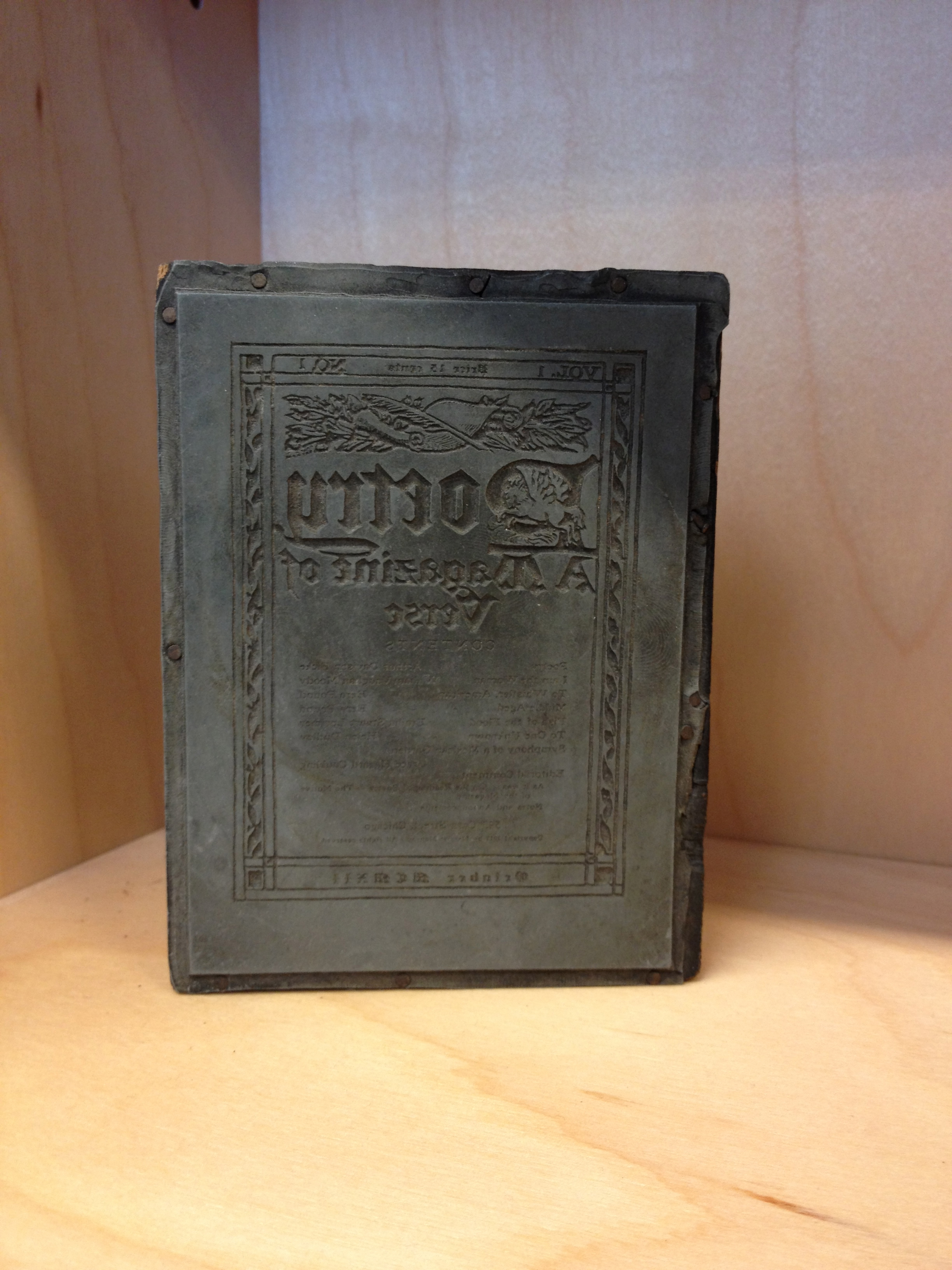 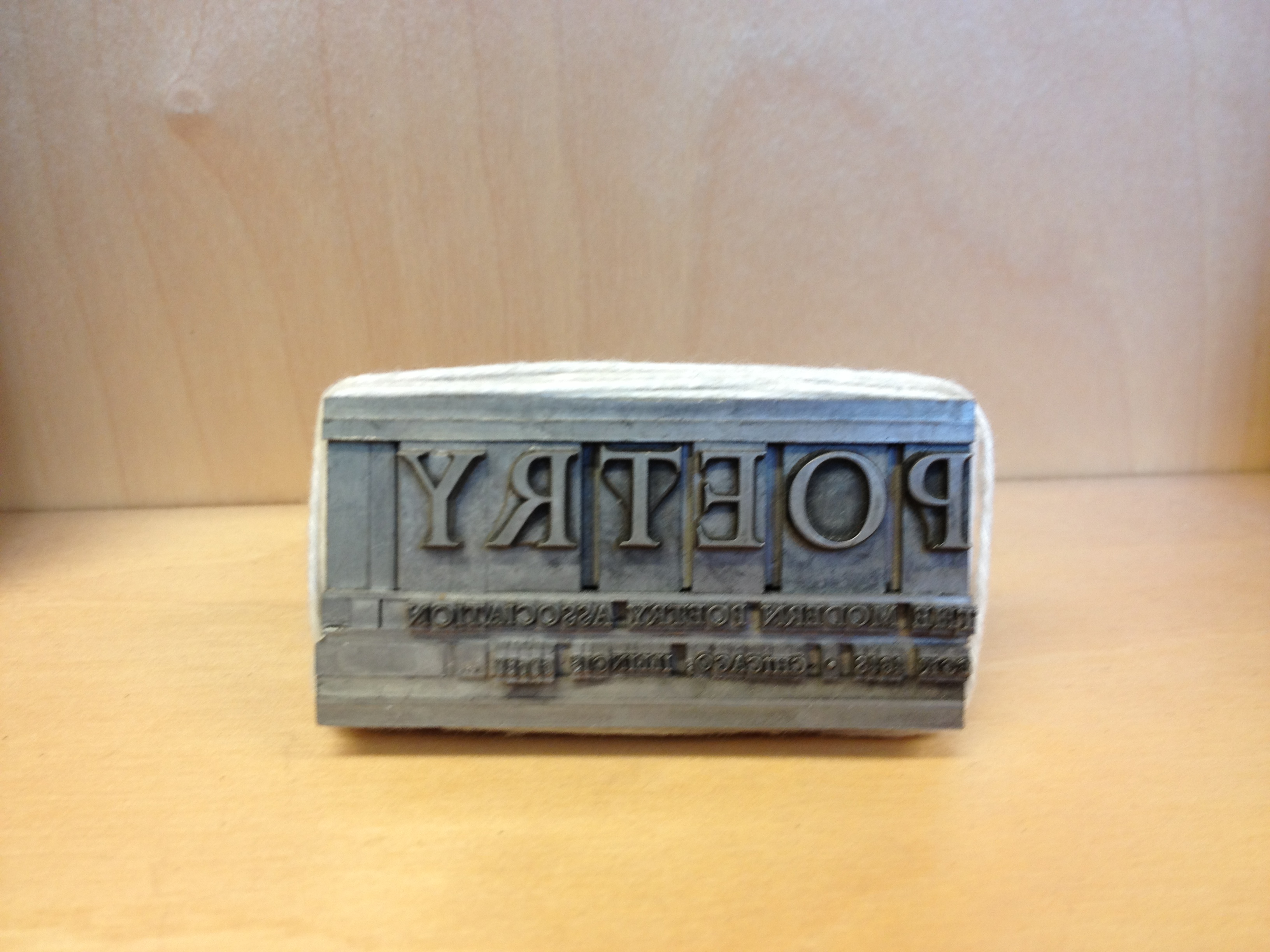 We ended the day with a trip to the Museum of Contemporary Art, where I was happy to revisit the book art of Dieter Roth and learn more about Gordon Matta-Clark’s history of site-specific work at the MCA (Lawrence Weiner fell into one of M-C’s cut-outs on an upper floor and landed down on Floor 2!). I was also grateful to have discovered the work of Ron Terada (creator of the “Being there” sign at the top of this post), David Hartt, and, especially, Iain Baxter&. Baxter’s reinvention as N.E. Thing Company, which doled out aesthetic judgments, and his detourned landscape art — particularly the impressionist landscapes on TV screens — were totally brilliant.

To close on a completely random note: my dogs, with whom I was able to spend some time over the holidays, and whom I now miss terribly: