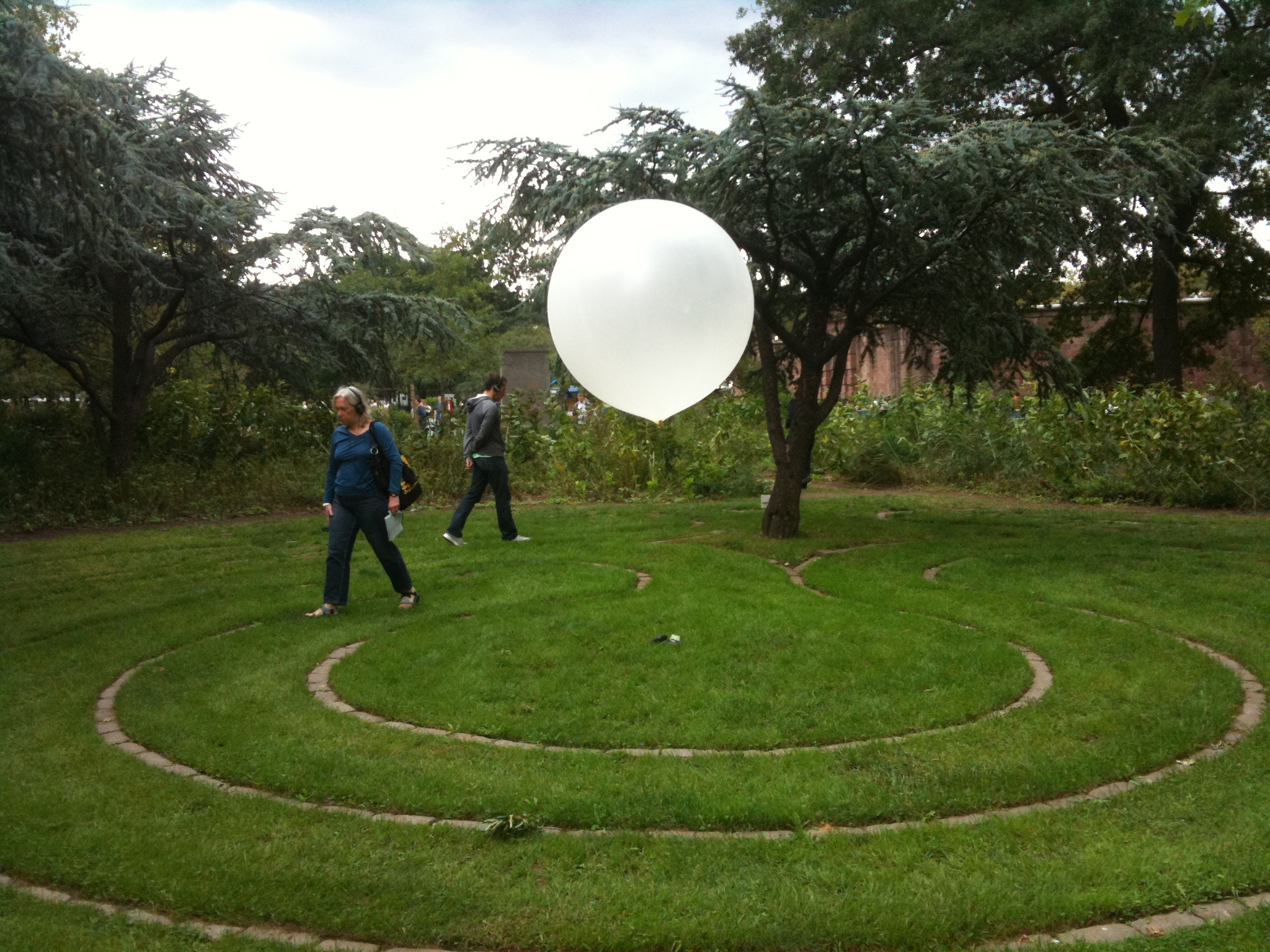 Today my husband and I took part in the second edition of the Guggenheim’s stillspotting project, a two-year collaborative undertaking dedicated to finding ways for people to “escape, find respite, and make peace with their space in this ‘city that never sleeps.'” The museum has partnered with Columbia’s Spatial Information Design Lab, where students created “data studies” of urban noise (including this visualization of music-related 311 complaints, this video mapping of the sounds of above-ground and subterranean infrastructures, and this Underground Public Library project, which I like for obvious reasons); and with SVA’s photography/video MFA program, where students created “video studies of the visual, aural, and sociological ecology of the urban landscape in New York.” I’m particularly fond of Jessica Miller’s video, below; its singular focus on scattered shards of glass limits our visual awareness of our surroundings to only the movements reflected in the glass. We’re thus aware of movement behind us, behind the camera — a three-dimensional perception that’s more akin to the way we hear than the way we see.

Our adventure today took us to several sites around Lower Manhattan (and would’ve taken us to Governor’s Island, too, if we had more time), where we experienced “To A Great City,” a network of “listening installations” (my term) curated by architecture firm Snøhetta and composer Arvo Pärt. We started off walking the labyrinth in Battery Park (see top photo) — at the center of which was a weather balloon, the spatial icon of each stillspot — while listening to Pärt’s “Silentium” on iPod Shuffles. It was a perfect experience to start with — simultaneously centering and disorienting.

We then moved on to the Woolworth Building, which I had only walked past, never entered, before. Oh, the lobby! — the embodiment of the commercial sublime! Again, a weather balloon marked our spot, on the stairs, where we sat for 20 minutes and enjoyed Pärt’s “In Principio.” Unfortunately, we weren’t permitted to take pictures (from what I understand, nobody is), but the following image, which shows just a portion of the ceiling, gives you a sense of just how much there is to look at here.

Our final stop was 7 World Trade Center, where we headed up to the 46th floor, stepped off the elevators, and found ourselves gazing upon this:

Pärt’s “Hymn to a Great City” was the soundtrack to our perambulatory panorama. I knew what scene awaited us along the south wall, so we decided to walk around the perimeter of the floor counterclockwise, first looking north, toward the Empire State Building; then west, toward the Hudson River pathway I walk every day; and finally, south, overlooking the construction at the World Trade Center and the new memorial. 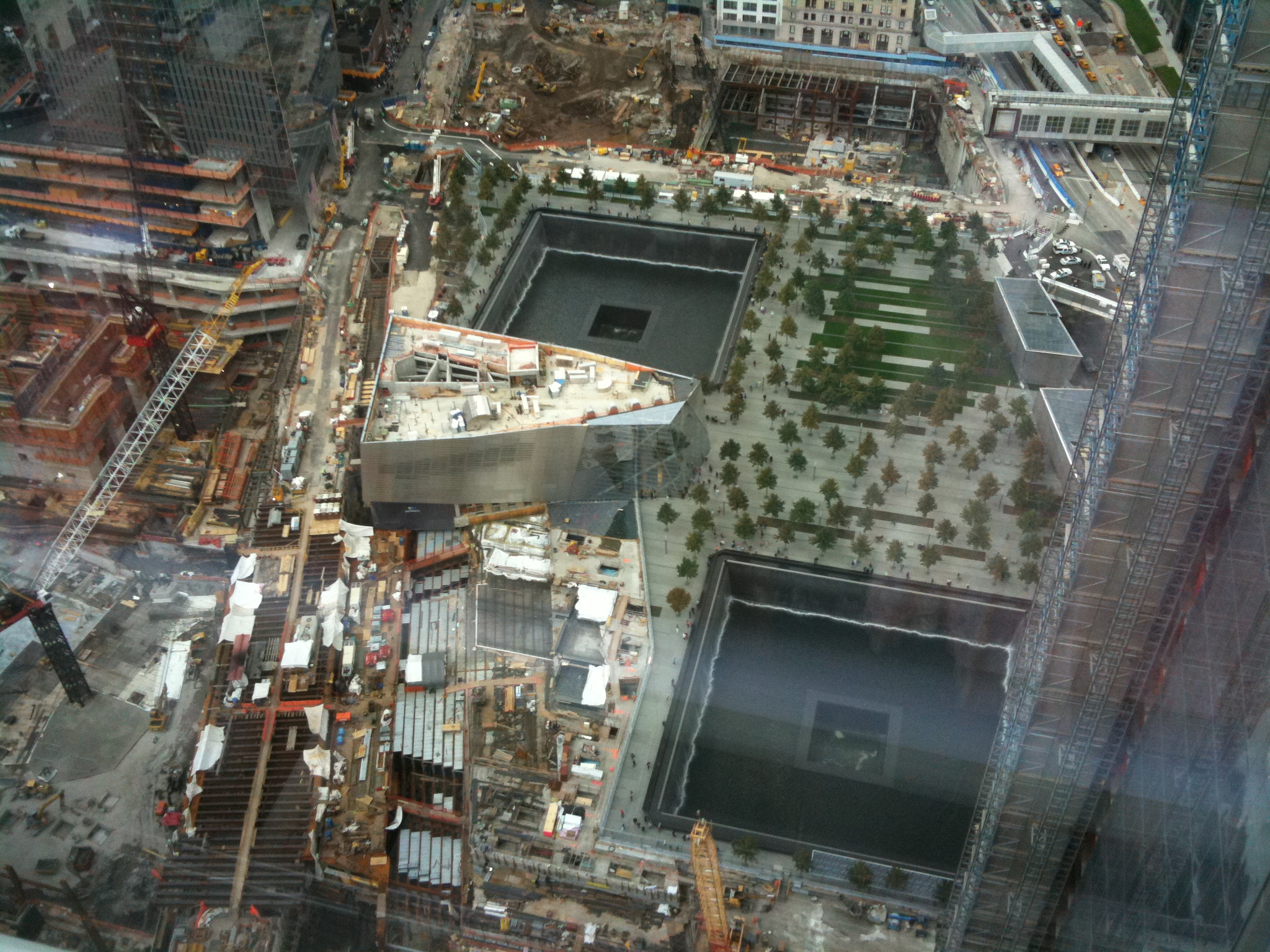 According to the Guggenheim, “To a Great City” “transports visitors from the hustle and bustle of the streetscape to an elevated urban experience that makes them newly aware of their sense of hearing.” I’m honestly a little tired of hearing this “raising awareness” justification for sound art, soundwalks, and any place-based or site-specific listening activity. We have to develop a better vocabulary to explain what precisely these sound projects do for us, how they function aesthetically and politically.

My husband and I agreed that the rhetorical intention of the soundtrack at the final site was a little too obvious. “Hymn to a Great City” was significantly lighter, airier, more hopeful than the other pieces we had heard that day. It seemed to me that were expected to look down upon the construction — the cranes, the massive piles of I-beams — the beautiful Hudson River parks; the Manhattan, Brooklyn, and Verrazano Narrows bridges and other engineering marvels; and the throngs of people bringing life to Lower Manhattan, and think, “You know what, Dave? Everything’s gonna be okay. Yeah. It’s okay.” And maybe I did think that while walking around the 46th floor, gazing down upon my beautiful city from several hundred feet up. But I also felt just a wee bit patronized.

That’s okay. I still liked it 🙂