Tonight at The New School, as part of the 9/11 Forum on Memory, Trauma, and the Media (which is in honor of the 10th anniversary of 9/11), I’ll be saying a few words about the material memory of dust, scraps of paper, and other ephemeral media:

It was not a street anymore but a world, a time and space of falling ash and near night. He was walking north through rubble and mud and there were people running past holding towels to their faces or jackets over their heads. They had handkerchiefs pressed to their mouths. They had shoes in their hands, a woman with a shoe in each hand, running past him. They ran and fell, some of them, confused and ungainly, with debris coming down around them, and there were people taking shelter under cars.

The roar was still in the air, the buckling rumble of the fall. This was the world now. Smoke and ash came rolling down streets and turning corners, busting around corners, seismic tides of smoke, with office paper flashing past, standard sheets with cutting edge, skimming, whipping past, otherworldly things in the morning pall. (DeLillo)

At the beginning of his novel Falling Man Don DeLillo describes a scene that looks and feels and smells familiar to many of us. Even if we weren’t here on September 11, we’ve seen it in the videos: the South Tower falls apart around the floors where the plane impacted, its crown topples, and the building cascades to the ground. In some videos, when other structures stand between our videographer and the World Trade Center, it takes a few seconds until we can see the cloud of debris rising above the rooftops – and, sometimes, a few seconds more before it becomes apparent just how massive that cloud is, and how rapidly it’s approaching. [See first 35 seconds of the below]

A few videographers, perhaps unable to run fast or far enough, or perhaps willing to put themselves in harm’s way for the sake of capturing these scenes for posterity, plant their feet and allow the cloud to envelop them. As we watch and prepare for the wave to hit, perhaps you, like I, draw in a breath and hold it. But then we’re taken aback to see flecks of luminescence preceding the grey. Paper.

They ran and then they stopped, some of them, standing there swaying, trying to draw breath out of the burning air, and the fitful cries of disbelief, curses and lost shouts, and the paper massed in the air, contracts, resumés blowing by, intact snatches of business, quick in the wind. (DeLillo)

The wind prevailed toward Brooklyn that morning, carrying many of these documents into and even well across the harbor. Writing in the New York Times just three days later, Jane Frisch and David Rohde described how what seemed like a “sweet and peaceful snowstorm” of paper [see Figure 7, below] “floated past the windows of the old P.S. 142 building on Henry Street, metallic pieces catching the glisten of the sun. Some blew into the open classroom windows, where, one administrator said, teachers and students examined it ‘in wonder.’” 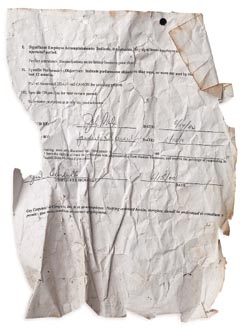 That “wonder,” I imagine, emerges in part from the realization that, until 8:45 on Tuesday morning, those very same sheets of paper represented the most pressing reality of the thousands of folks already at work in Lower Manhattan. And within minutes they had been made uncanny; they had become records of a bureaucratic normalcy, an existence, since lost. Yet in contrast to the amorphousness and inscrutability of the dust clouds and “the pile” at Ground Zero, these documents retained their form and legibility. Their status as “records” was clear. The students at P.S. 142 knew the value of what they had; Frisch and Rohde report that the teachers and students decided that the documents they intercepted “should be given to the police.”

Meanwhile, the “cloud of dust” elicited not wonder, but terror – in part because of its inscrutable composition. Writing in a recent commemorative double issue of New York magazine, Steve Fishman says of the dust cloud:

It was one of the indelible images of 9/11: a dark cloud chasing people up Broadway as they fled the collapsing Towers. The cloud turned out to be an aerosolized mix of poisons, thousands of them: silicon, Freon, PCBs, asbestos, lead, pulverized concrete, and on and on. It covered panicked survivors, coated buildings, seeped into ventilation systems, and hinted at the larger problem to come. The acres of rubble quickly became, as one CDC official on site at the time recently explained, ‘a hazmat situation.’” (125) 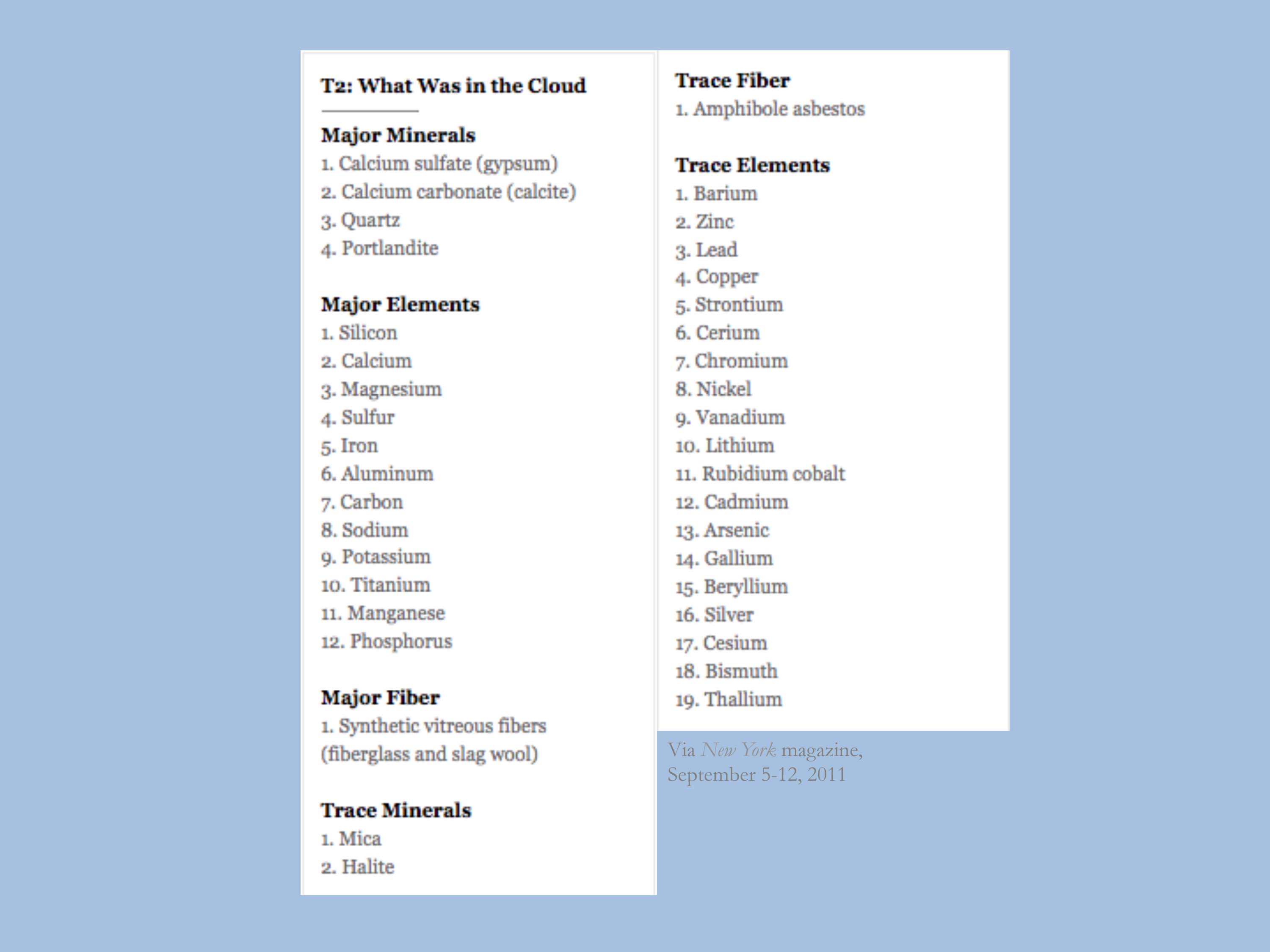 Indeed, many workers were afflicted with “WTC cough” or diagnosed with RADS, reactive airways dysfunction syndrome, or even cancer linked to prolonged exposure to the toxins on-site. 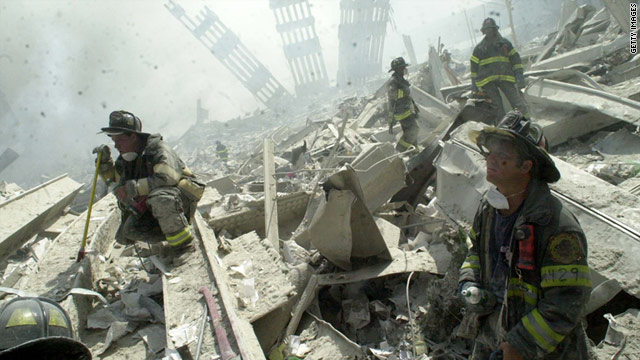 Dealing with the dust was an ethically charged issue. Workers on the pile were required to wear respirators, but, as Fishman reports, “many resisted. Some felt guilty: After brother firefighters gave their lives, worrying about one’s own health seemed disloyal” (128). These choices determined how one would materially remember what had happened there. Firefighter Adrienne Walsh reported that, amidst the rubble, “I didn’t see victims. They were dust. And I was inhaling them” (58). The material memory of the lost was thus literally internalized by the Ground Zero workers, “archived” in their bodies. 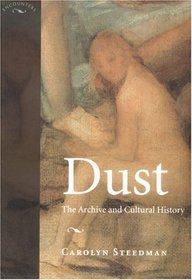 Archival work has long involved the internalization of material records, according to historian Carolyn Steedman. In Dust: The Archive and Cultural History she writes of Jules Michelet’s conviction that he was reviving records in the National Archives of Paris by breathing them in: “these papers and parchments, so long deserted, desired no better than to be restored to the light of day… [A]s I breathed in their dust, I saw them rise up” (quoted on 1171). As a consequence, Michelet, much like those who later breathed in the lives lost at Ground Zero, contracted what Steedman calls “Archive Fever Proper,” sickness brought on by exposure to the dust of organic matter – animals skins, byproducts of human labor – that is an integral part of the archive. 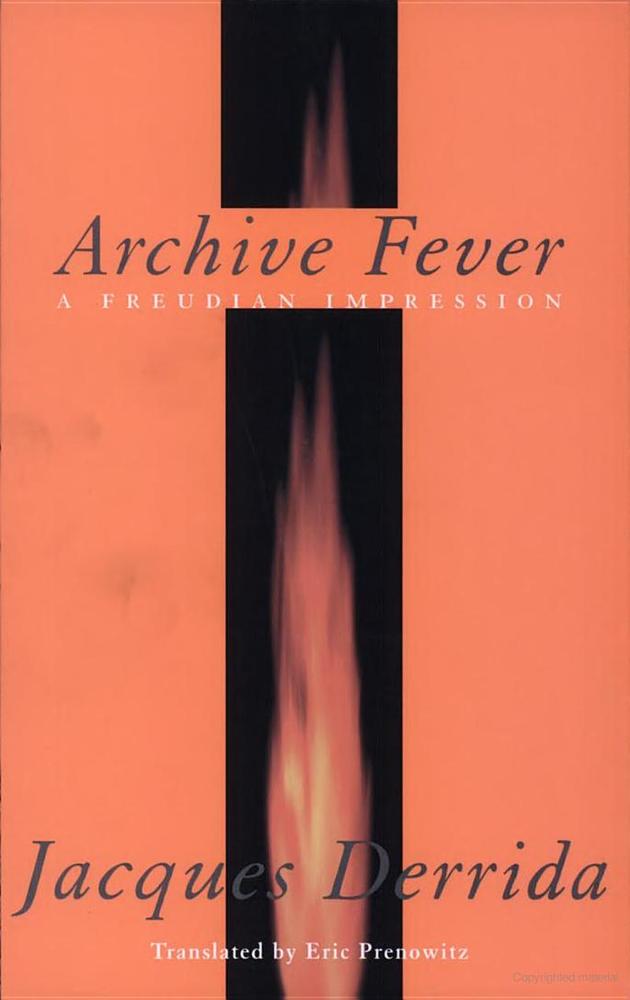 Neither Michelet nor those working on “the pile” in the days after September 11 could have known what they were breathing in. The pile in particular resisted attempts to identify its components. This heap of…what was it? rubbish, detritus, ruins? had collapsed into a pile of indistinguishable materiality. “The towers of the World Trade Center were made of steel, concrete, asbestos, wood, plastic, and glass,” Marita Sturken writes; “they were filled with desks, computers, tables, and paper, and, yet, they crumbled into dust.” They were of course filled with people, too. And as Patricia Yaeger says, “…to think of the bodies of the dead mingling with this debris, to think of the results of the 9/11 explosions as detritus, gives one pause” (187; emphasis added).

We cannot count on the formal integrity of the objects that once occupied this site. The boundaries between one object and another – and their very material constitution – are called into question. We don’t know how to name them, sort them, classify them, where to store them away in our memories. How do we sift the ashes from the dust, the remains from the rubble? Folklorist Kay Turner writes of Ground Zero as a “frozen zone” where “sudden annihilation had transformed the seemingly permanent into the definitively ephemeral: buildings became dust; work became millions of tiny scraps of paper floating in the air; and people, a total of 2603 of them, became bits and pieces of body parts, traces of DNA, or disappeared altogether, incinerated” (163).

Yet in order to process our grief, to remember, we often need some material trace or some symbol to hold on to. I’m going to quote Turner at length here:

[Ground Zero’s] harrowing ephemeralities of dust, bone, and smoke – ephemeralities of disaster and death – were in stark contrast to a different version of the ephemeral that then prevailed at Union Square. If, as Camille Paglia and Ingrid Sischy suggest, in an instant two of the primary symbols of 20th century modernity – the airplane and the skyscraper – were used as weapons against each other, our first response to that catastrophic collision was a return to the usefulness of ephemeral, and hence incorruptible, symbols. The fragile beginnings of recovery from annihilation – an experience of stopped time, a feeling of the end of time – was initially felt in the human impulse to store time and memory in mundane material objects and simple yet universal symbolic images that could be seen, experienced, and interpreted by all. (Turner 163)

We see evidence of such an impulse in the “missing” posters that blanketed the city for weeks after September 11; in the flowers and candles marking spontaneous shrines, particularly at Union Square; in the presentation of urns filled with Ground Zero dust to families who had lost loved ones; in the marking, each year, of the Towers’ voided footprints by beams of light. Through these acts we masked the odor of death and destruction emanating from Ground Zero; we reintroduced “flashes of luminescence” into a gray landscape; we gave form to the missing, the dematerialized.

These acts were in part attempts to sort through and make sense of those inscrutable piles of rubbish and clouds of dust. What we might not have realized at the time was that the dust, toxic and uncanny though it was, may have been an ideal representation of, or medium for, how we would remember the tragedy. As Sturken and Steedman remind us, dust is not “about refuse or rubble so much as it is about a cyclical materiality. It is a reminder of continuity, a vestige of what was that continues to exist” (Sturken 314).