[Part 2 of two-part post regarding lectures I created in 2008 for my intro to grad studies course — lectures I meant to turn into a publication but never did.]

Once we talked about the history and theory of craft, and the value of using it as a metaphor [cf. “Revisiting Craft Part 1”] to think about our work as scholars, artists, designers, producers, etc., we looked at the tools and methods available to us as craftspeople — and how the values inherent in craftsmanship obligate us to relate to those tools in a particular way: through “material consciousness.” 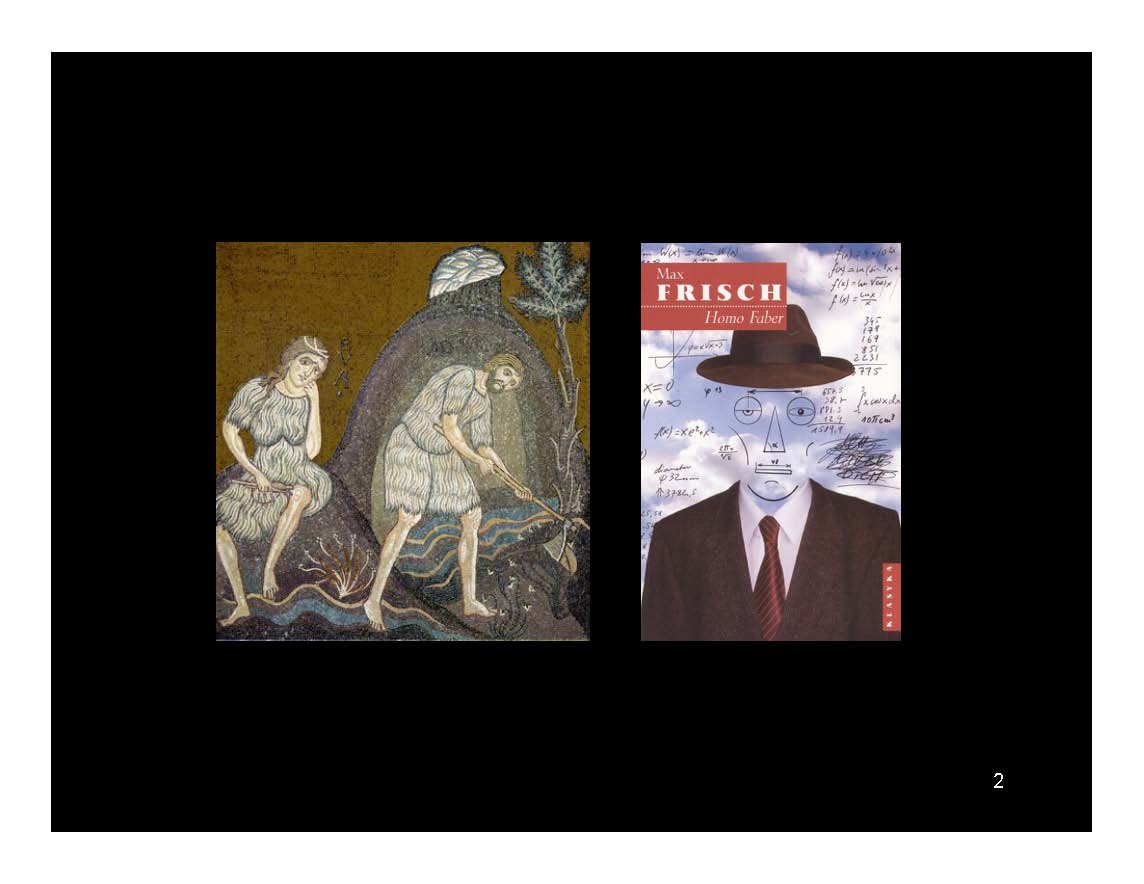 The Craftsman is Sennett’s argument with his teacher, Hannah Arendt, who distinguished between animal laborens and homo faber. Sennett questions the distinction between and hierarchization of these two roles. 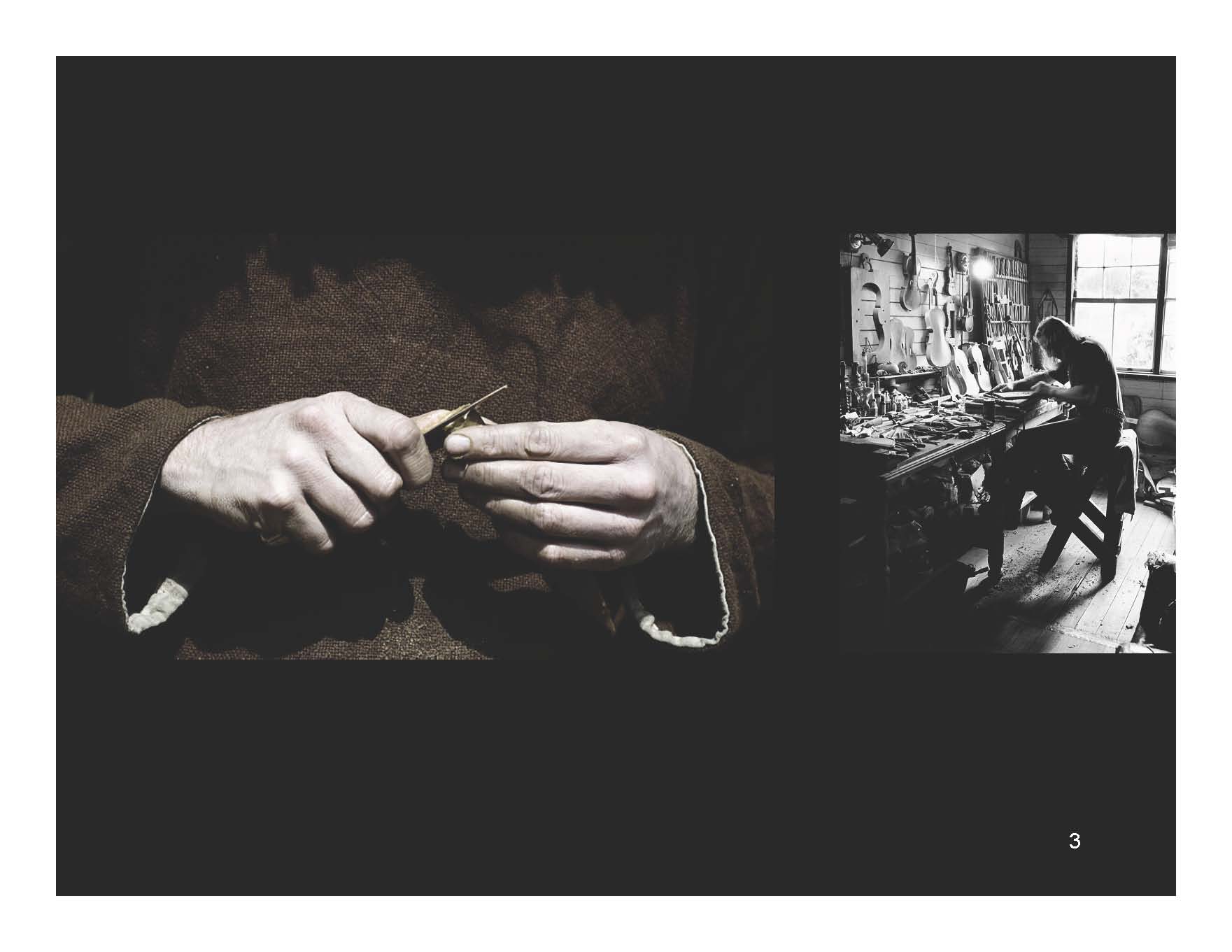 Craftsman embodies “the modern, perhaps unresolvable conflict between autonomy and authority“: the need to be a free, self-determined creator, and the equal need for that creativity to be measured against collectively-agreed upon standards of excellence.

Among those “agreed-upon” standards are the tools and methods we use. 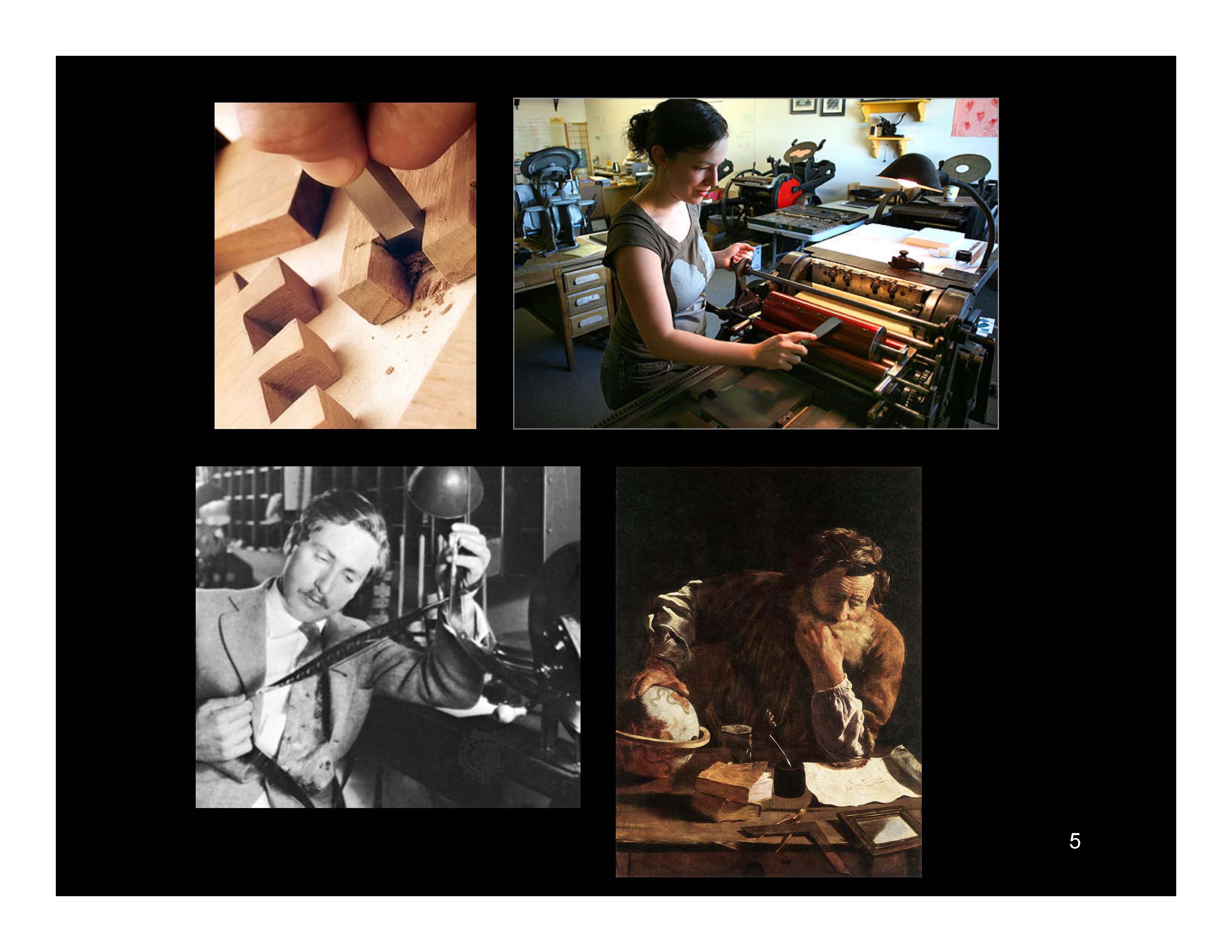 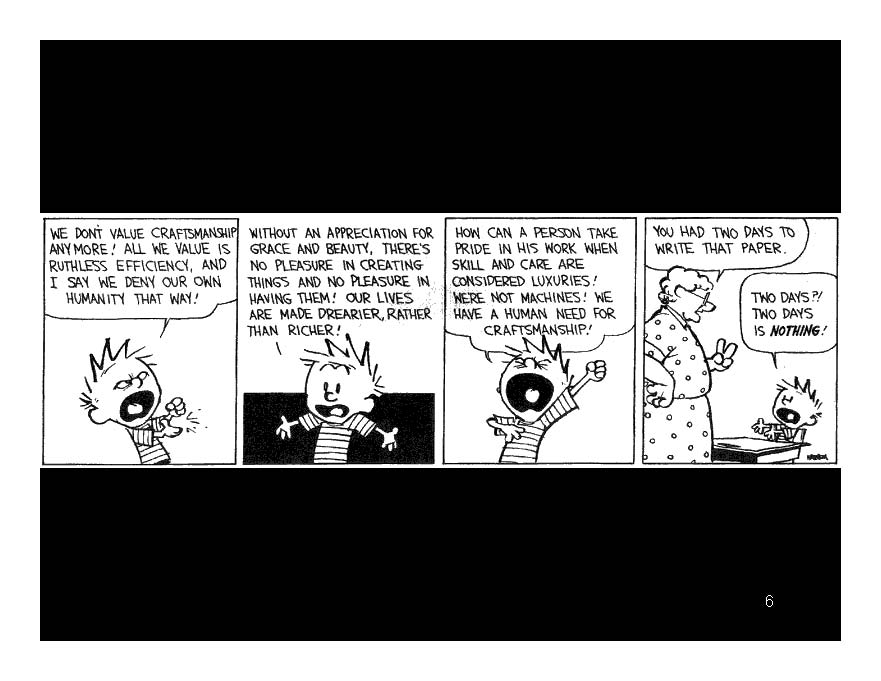 All the above was merely the intro to a lecture on “material consciousness.” Ironically, I wasn’t able to be materially present that week, because I was getting married (!), so I distributed the lecture as a reading: 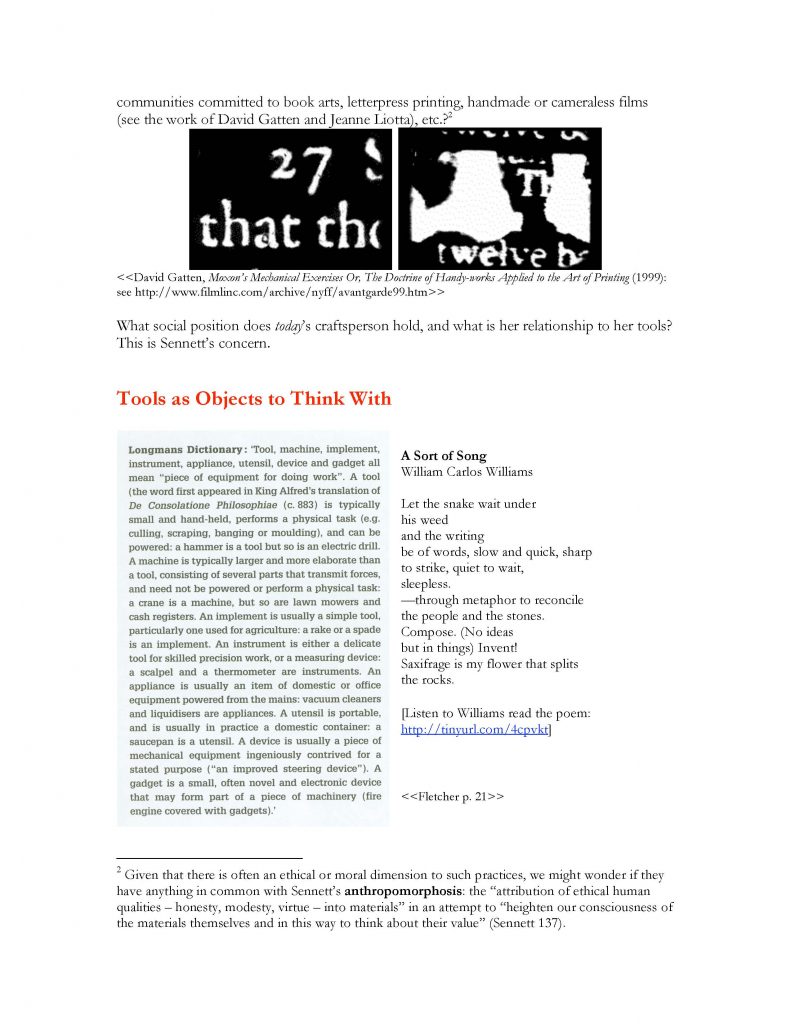 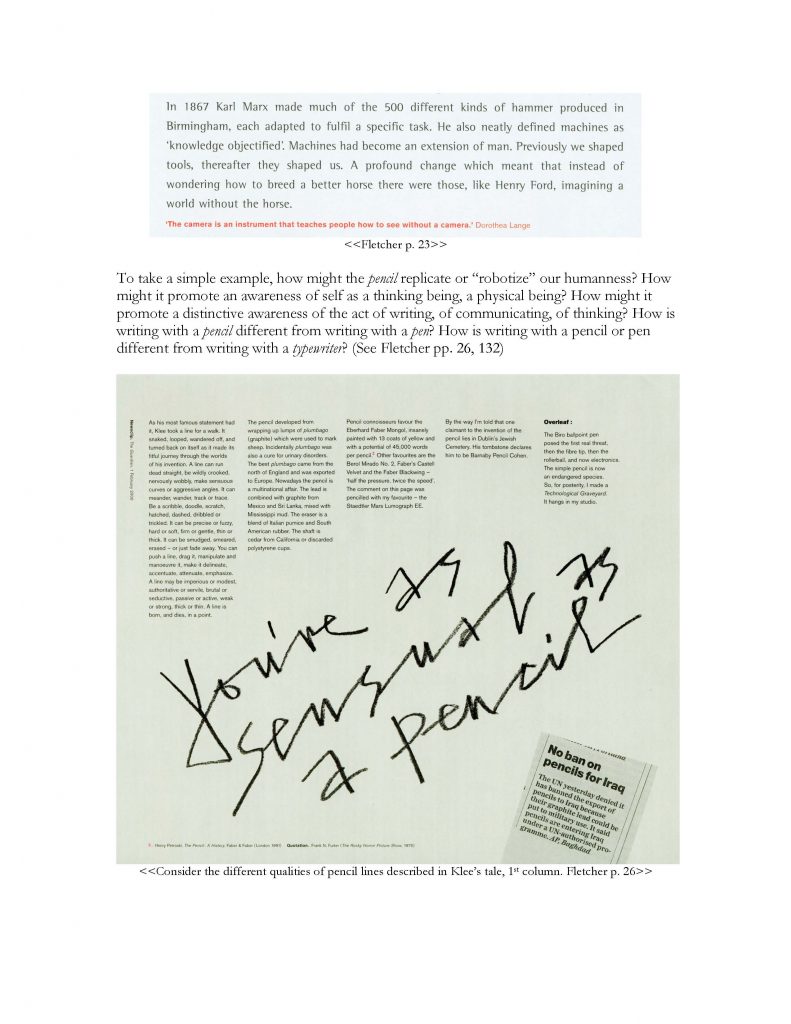 …Sennett encourages us to cultivate a form of “material consciousness” – to think through or with the tools we use. Mirror-tools, “implement[s] that invit[e] us to think about ourselves,” come in two varieties: replicants and robots. Replicants duplicate the properties and functions of human beings, while robots are “ourselves enlarged – stronger, faster indefatigueable” (Sennett 84-5). The “replicant shows us as we are, the robot as we might be” (ibid.). Sennett’s proposal might call to mind McLuhan’s claims that media are extensions of our sensory organs and faculties.

…Taking into consideration how potentially illuminating mistakes and break-downs can be, Sennett proposes that we intentionally manufacture such problems on occasion – just to build our material consciousness.

…Sennett proposes that we who are accustomed to “abstracted” and automated processes and digital tools consider “how to think like a craftsman in making good use of technology” (44). “The enlightened way to use a machine,” he says, “is to judge its powers, fashion its uses, in light of our own limits rather than the machine’s potential. We should not compete against the machine…. Against the claim of perfection we can assert our own individuality” (Sennett 105). We might try to capture, in whatever media we use, “the tactile, the relational, and the incomplete” – qualities that are characteristic “physical experiences that occur in the act of drawing” (44; italics mine). We should aim to feel the material specificity of the media we handle; to be aware of the relation of parts to wholes and connections between different stages of design and execution of a project; to appreciate the incompleteness, the possibility, of a design or plan that is not spit out of a machine as a fait accompli.

To McCullough, computer animation, geometric modeling, spatial databases – in general, all forms of media production or design – can be said to be “crafted” when creators “use limited software capacities resourcefully, imaginatively, and in compensation for the inadequacies of prepackaged, hard-coded operations” (21)…. Again, as Sennett suggests, we “assert our own individuality” against the prepackaged, predetermined processes and limitations of the tools we’re using. Craftsmanship, says aesthetic historian David Pye, is “workmanship using any kind of technique or apparatus, in which the quality of the result is not predetermined, but depends on the judgment, dexterity and care which the maker exercises as he works” (45).

“Workmanship engages us with both functional and aesthetic qualities. It conveys a specific relation between form and content, such that the form realizes the content, in a manner that is enriched by the idiosyncrasies of the medium” (McCullough 203). “[E]ach medium,” McCullough says, “is distinguished by particular vocabulary, constructions, and modifiers, and these together establish within it a limited but rich set of possibilities” (McCullough 230). Similarly, each methodology, or each research resource, has its own particular vocabulary, constructions, modifiers, obligations, and limitations. We need to choose our tools with these potentially enriching, and just as potentially debilitating, idiosyncrasies in mind. Do we need advanced software, or will iMovie suffice? Do we need to record an focus group in video – or will the presence of the camera compromise my rapport with my interviewee? Will an audio recording be more appropriate? Do we need to conduct primary interviews if others have already documented extensive interviews with these same subjects? Do we need to conduct extensive, long-term field-work – or can we accomplish everything in a short, well-planned research trip? How do I match my problem or project to the most appropriate tool? 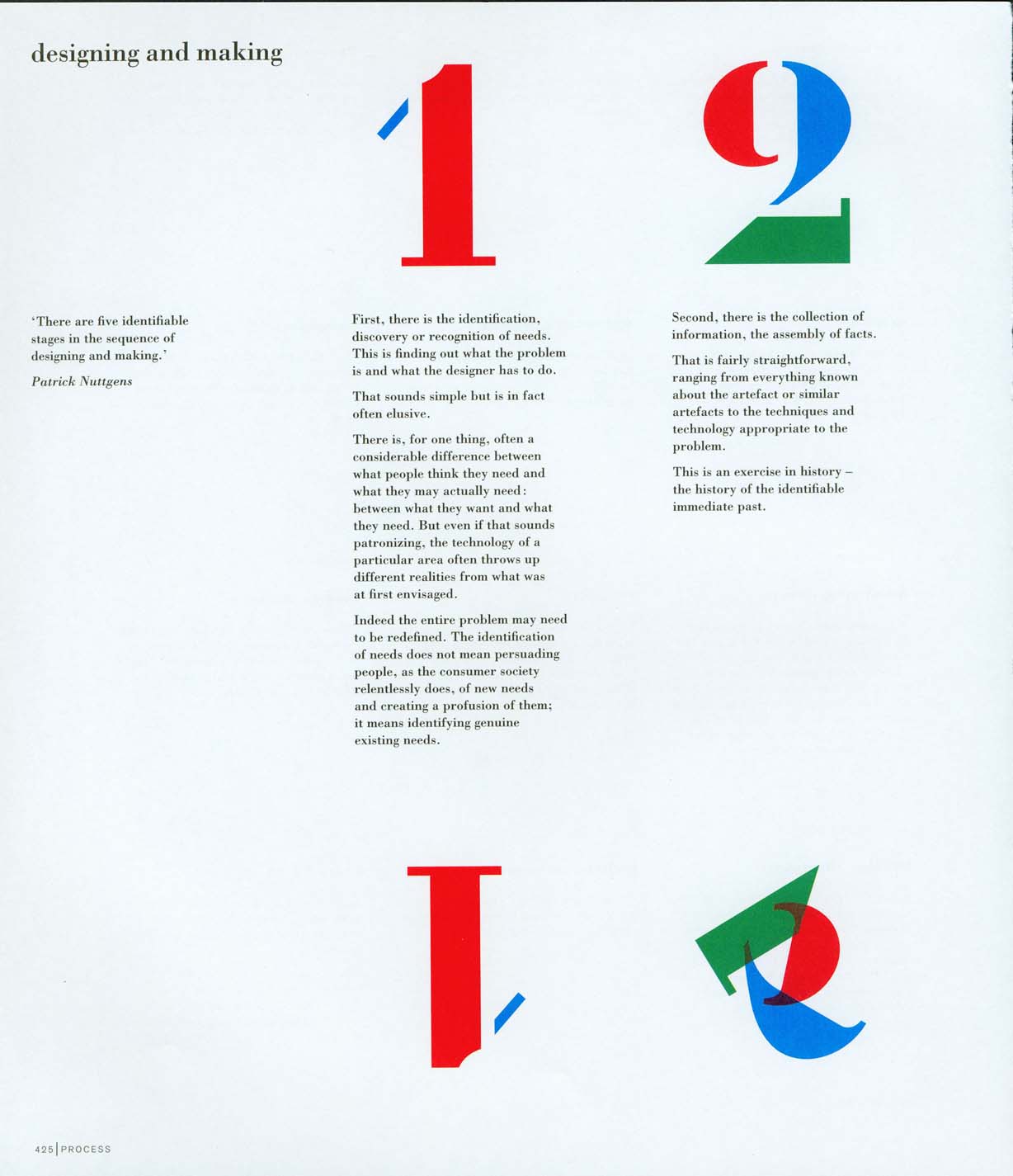 One reply on “Revisiting Craft 2: Tools of Craftsmanship”

Thanks for the insights. I’m preparing a lecture at Autodesk University and found your distinction between craftsmanship and tools helpful. There is quite an argument going in my world as digitally controlled tools become more common in construction. Some say the day is approaching when machines will make things “without human participation”. I feel that if so it’s a long way off and that computers and CNC tools lack the knowledge about material properties and their interaction with other tools, materials and our environment to be able to make decisions best made by “craftsman” who understand their tools AND their materials and the end uses of the object. Would appreciate your thoughts if you’re interested.