[There was a bug somewhere in here, so I had to delete and repost.]

Saturday’s New York Times included an article by Joshua Brustein on the New York Public Library’s recent tech developments — specifically, its new Biblion “boundless library” (a reader/media viewer app that’s received mixed reviews, but which I’m still eager to play around with); its partnership with Bibliocommons to create a more interactive online catalogue; and its “Find the Future: The Game,” created by Jane McGonigal and partners for the centennial celebrations. Brustein isn’t crazy about Biblion, but he’s keen on the game:

I had more fun with the library’s other new app, a smartphone scavenger hunt called Find the Future. The game accompanies an exhibition by the same name that runs through December at the library’s headquarters, on Fifth Avenue.

The game requires players to seek out various objects or books in the library, and awards points when you snap a photograph of the accompanying Quick Response code, readable by phone cameras. The app takes several moments to process these points, trying to get users to spend some time with the objects rather than running wildly through the building.

It worked for me. I lost an hour snapping photographs of things like Charles Dickens’s cat-claw letter opener and a draft of the Declaration of Independence, and still made it only about halfway through the first of the game’s nine chapters.

Whether or not “it worked” depends on what you regard as the game’s goal. Is it enough to convince (onsite or online) visitors to “spend some time” with the objects and snap some photos? McGonical seems to have set her sights much higher. I wrote about this back during the centennial weekend, on May 22. I’m all for the NYPL — and all libraries — getting involved in tech and software development in an attempt to attract new users, highlight underused collections, help users access and use their collections in new ways, etc. I say this because I don’t want to sound like a curmudgeon when I admit that I have serious doubts that the game did, or can, live up to the promises McGonigal made for it. Don’t get me wrong: I think gaming is a great way to get people interested and involved in libraries — but I think we have to be realistic about what such projects can accomplish. I would’ve much rather heard the library’s take on the game’s function than McGonigal’s overblown rhetoric.

Here’s what I wrote last month, with some minor edits:

…Find the Future: The Game, meanwhile, encourages decontextualization of a different sort. This game, commissioned for the centennial and created by Jane McGonigal, Natron Baxter and Playmatics, “brings visitors to the Library together with players around the world to tap into the creative power of the Library’s collections” (via the game’s “About” page, since deleted(?); also available here). The game began on May 20, when 500 gamers (aged 18 and up) were invited to an all-night “lock-in” during which they “explore[d] the building’s 70 miles of stacks, and, using laptops and smartphones, follow[ed] clues to such treasures as the Library’s copy of the Declaration of Independence in Thomas Jefferson’s hand” (via NYPL). Upon finding each object, players were prompted to write an “artifact story,” a “short-personal essay inspired by their quest.” These essays were then gathered into a book — “a collection of 100 ways to make history and change the future” — that will be added to the library’s collection.

The next day, the game was opened up to the rest of the world. Anyone could access Find the Future: The Game online to pursue their own “quests” for library artifacts, write their own narratives, and collect “artifact powers.” 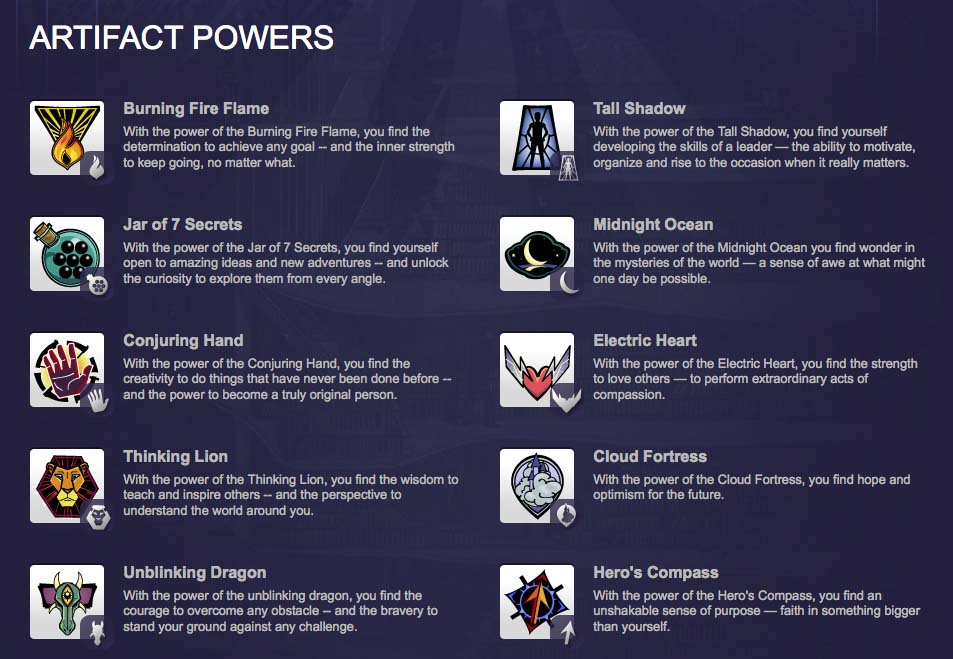 If only real-world research were this exciting! If only one could “find the wisdom to teach and inspire others — and the perspective to understand the world around you” by simply clicking a link! 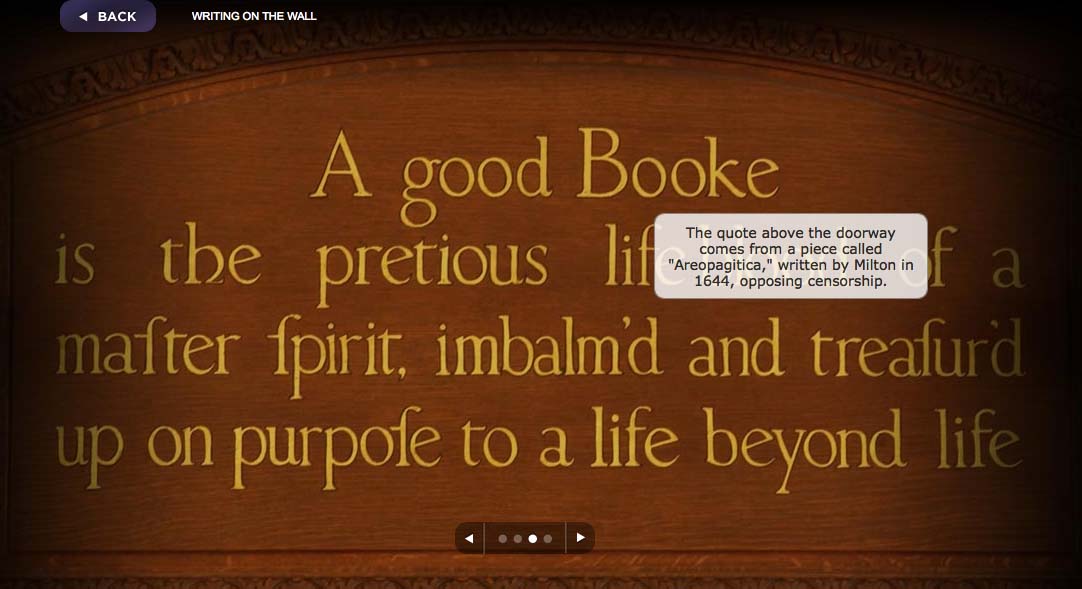 I tried it myself. My first “artifact” choice was “Writing on the Wall,” a John Milton quotation inscribed above the doorway to the Rose Reading Room: “A good book is the precious life-blood of a master spirit, embalmed and treasured up on purpose to a life beyond life.” Through an automatically advancing slideshow, I learned that Milton “made history by turning the fall of man into an epic poem,” that he is “one of the great poets of the English language,” that he is most famous for writing (while blind) “Paradise Lost,” and that the quotation is drawn from Areopagitica, which Milton write in 1644, “opposing censorship.” Armed with this insight, I’m then prompted to write my own artifact story:

The quote above the entrance to the Rose Reading Room has inspired many generations of visitors with words that are impossible to forget once you’ve read them. These people went on to become famous inventors, artists and leaders who changed the world. What would you say to inspire the next hundred years’ visitors? Imagine The NYPL has asked YOU to update this quote. They will put YOUR new saying over the entrance for the next 100 years. Write your own quote that you want to plant in the minds of millions of people.

That’s it? Armed with a few superficial facts about Milton I’m now prepared to inspire “the next hundred years’ visitors”? Do I really have enough context to be charged with such a tremendous responsibility?

My choice of inscription: “Technological progress has merely provided us with more efficient means for going backwards” – Huxley

The game, McGonigal says, is “designed to empower players to find inspiration for their own extraordinary futures by bringing them face-to-face with the writings and personal objects of people who made an extraordinary difference in the past.” What does it mean to come “face-to-face” with these artifacts? The lucky 500 who played on-site on May 20 were able to encounter the original artifacts (although I imagine some were more busy snapping QR codes than inspecting the artifacts they marked) — but are those brief, superficial encounters sufficient to convey the “extraordinary difference[s]” these people made in the past? Is it enough for me to know that the Gutenberg Bible was the first book to be printed on a movable type printing press; that “its publication in 1455 is considered by many to be the single most important innovation of the last millennium” (why?); that before the press, books were copied by hand or by using woodcut letters; that Gutenberg devised a system using metal letters that could be quickly rearranged and printed using specially-mixed inks; that there are fewer than 50 known copies of the Gutenberg Bible in existence, and that the NYPL has two of them? Do these facts then qualify me to write something that “everyone on Earth” can read?

The Gutenberg Bible marked the start of the printing revolution, in which messages could be spread to millions worldwide through the mass production of printed books. Now modern technology allows us to message thousands of people instantaneously. New advances could bring even more widespread communication. If you could write something that everyone on the planet could read, what would it be? Write a message that could be read by everyone on Earth.

The game shifts abruptly from an historical to a contemporary context, without explaining how to responsibly make that temporal transition. It shifts equally abruptly from a focus on the artifact to an egocentric focus. “How would you like to shape the future?” The prompts for these “artifact stories” barely reference the artifacts’ historical context. They barely address the social responsibilities inherent in, or methods required for, making such consequential decisions. [Added June 26:] This is particularly problematic because the game — this one and others that will inevitably be developed in emulation — have the potential to appeal to audiences far outside the pilot test’s 18+ gamer demographic. How, for instance, will school-aged children deal with these important epistemological, methodological, and ethical issues — or how will they know that such issues exist if no one poses the difficult questions to them?

“Like every game I make,” McGonigal says,” Find the Future: The Game” has one goal: to turn players into superempowered, hopeful individuals with real skills and ideas to help them change the world.” I can see how this game cultivates hope and empowerment: it’s fun, you win points, you acquire super-human cognitive powers and affective capacities by simply clicking on links, your opinion is sought on matters of grave importance, etc. But in what context is this play taking place? What skills are being developed? What ideas, aside from cursory factual information (how can you claim that the Gutenberg Bible is the “single most important innovation of the last millennium” without explaining why?!), are being circulated here?

If gaming is the future of education, as many have claimed, I still need to be convinced that gaming provides sufficient “context” for all those skills and ideas it’s purporting to cultivate. I’m still not sure that gaming is the appropriate model for “help[ing] people change the world” — when so much world-changing work isn’t fun, doesn’t win you any points or super-powers, and carries responsibilities that a game simply can’t simulate. I’m not doubting gaming’s potential; I just think we have to be realistic about when it’s an appropriate tool and what it can accomplish.