Tomorrow is the 100th anniversary of the dedication of the New York Public Library’s 42nd Street building, and this weekend has been filled with lots of fantastic activities celebrating the centennial. Yesterday afternoon I stopped by the “Celebrating 100 Years” exhibition on my way to a performance in the Periodicals room. A not-entirely-favorable review in the Times, which I read earlier that week, focused primarily on the curators’ choice not to distinguish between materials of undeniable historical significance and those, like Terry Southern’s typewriter or a bunch of seed packets, with everyday resonance or popular appeal. Everything is presented “on the same level,” Edward Rothstein writes. “[S]ocial, historical and aesthetic contexts dissolve, leaving many objects standing alone, as if each were a celebrity.” 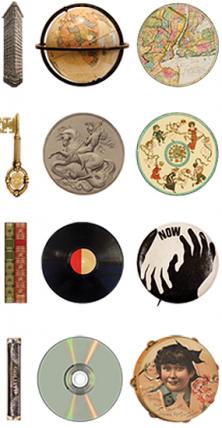 Perhaps the position of these artifacts within their historical and institutional contexts was obscured by their organization into four rather nebulous thematic sections: Observation, Contemplation, Society, and Creativity. But I was overwhelmed by the tangible presence of a different kind of context: the presentation of these “texts” within an “original” material form that carries just as much significance as the symbols on the pages. Face to face with original artifacts, one couldn’t help but be struck by the scalar contrast between palm-sized clay tablets with their miniscule cuneiform scripts, and, just around the corner, Audubon’s oversized Birds of America – or by the richness of the inks on centuries’-old books, the gilt on the pages’ edges, the traces of texts bleeding through thin paper, the variety of styles of penmanship. As I walked around the room, encountering each artifact, I kept thinking to myself, “just try digitizing that!” How can a scan capture the dimensionality, the tactility, the – oh, I can’t help myself – aura of these artifacts?

I remembered speaking last summer to one of the curators in the Manuscripts and Archives division about their efforts to scan and post online a significant portion of their collection. He regarded those digital images as a mere preview of the record – an enticement to encounter the “real thing” (my words). Those texts, to function as “historical records,” must be instantiated, and those instantiations are just as integral to their value as historical documents as is their semantic content. As Jared Keller wrote recently in The Atlantic in regard to Google’s shuttering of its newspaper digitization project,

If Google’s mission to “organize the world’s information and make it universally accessible and useful,” does downgrading the Newspaper Archive into a text-only database still serve the same function of preserving those first drafts of history as they appeared in the pages of The Boston Phoenix, The Milwaukee Sentinel, or Le Monde?

Not necessarily. For print newspapers, layout is key: Before the Internet catalyzed the unbundling of news packages into single, shareable article pages, editors had to decide what deserved front page treatment and what would be better suited for small corner in the Classifieds. Ad sales shaped how and where articles [were] presented in the paper. Stories lived and died by how many inches a broadsheet had space for…. The medium is the message, and capturing the layout of the printed paper allows us to digest a facet of the news, as it was reported, that a plain text scrape cannot.

In other words, material context is key. Reading Dickens’s marginalia or analyzing Jefferson’s handwriting or determining where Malcolm X bought his notebooks can of course yield insight into these writers as historical figures. But the material context of these historical records also intersects with other contexts: political, economic, cultural, social, etc. It might seem that such concerns are pertinent only to the pre-digital historical record; now that today’s records are born as code, there will be much greater formal and material unity in tomorrow’s historical record, right?

Not really. There is a very different, though no less physical, materiality to the digital “libraries” we’re creating today for tomorrow. As we discussed all throughout this semester in my Libraries, Archives, and Databases class, the library-of-servers is no less materially complex than the library of manuscripts and clay tablets. We’ll want to know what hard drive models, what operating systems, what software – and what versions of that software – authors and institutions (and machine-authors!) used. We’ll need to practice Kirschenbaum’s “forensics” and Lenoir’s “information archaeology.” Just yesterday Jussi Parikka, pruning excess words from his Media Archaeology and Digital Culture manuscript, posted this fantastic quotation from Lenoir (2007):

Historians will need to add new tools of information archaeology to their tool-kit in order to write the history of recent science and technology born digitally. Among the types of tools we need are, for instance, emulators of older systems, such as the IBM 360, and other machines, such as Burrough’s machines, Osborn’s, and others that do not have legacy systems maintained by large companies or successor firms. Even early-generation Silicon Graphics machines that appeared in the late 1980s and early 1990s are becoming scarce today. In order to research the programs that ran on these machines, we need to construct emulators that run on current generation machines. Beyond this we need to render the original programs in forms readable by current disk drives and other data-reading technologies. While genealogies of software and software languages are being constructed, more attention will have to be devoted to the history of software languages, and their implementations.

We’ll still need experts and institutions to help with the material work of collecting, sorting, preserving, and contextualizing — and fostering an appreciation of the connections between the material instantiations of these records and their other contexts.